The last week of February across Europe will remain dominated by a persisting and extensive upper ridge, before the pattern gradually changes into a more dynamic weather driven by an intensifying zonal flow through early March. Let us get into daily details of the pattern evolution.

A powerful upper ridge is centered over western Europe and dominates almost the whole Europe. Two shallow upper lows are located across the southern and eastern Mediterranean, resulting in unsettled conditions with significant flooding potential locally. A deep trough with much colder weather pushes into the Azores with another potentially severe windstorm. A deep cyclone nears Iceland and brings very windy conditions while a significant warm advection takes places across central, western and partly northern Europe. 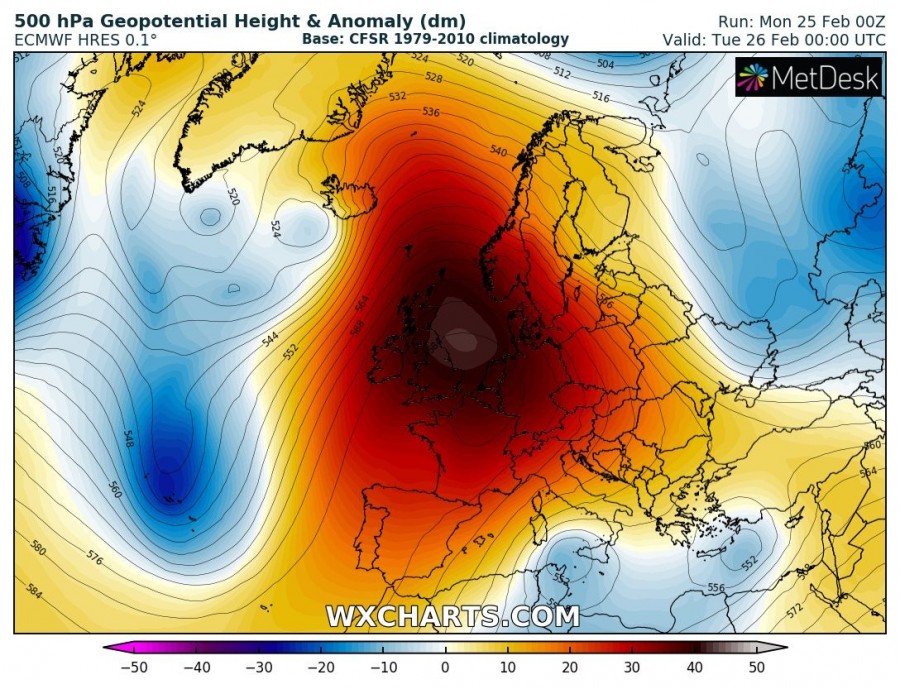 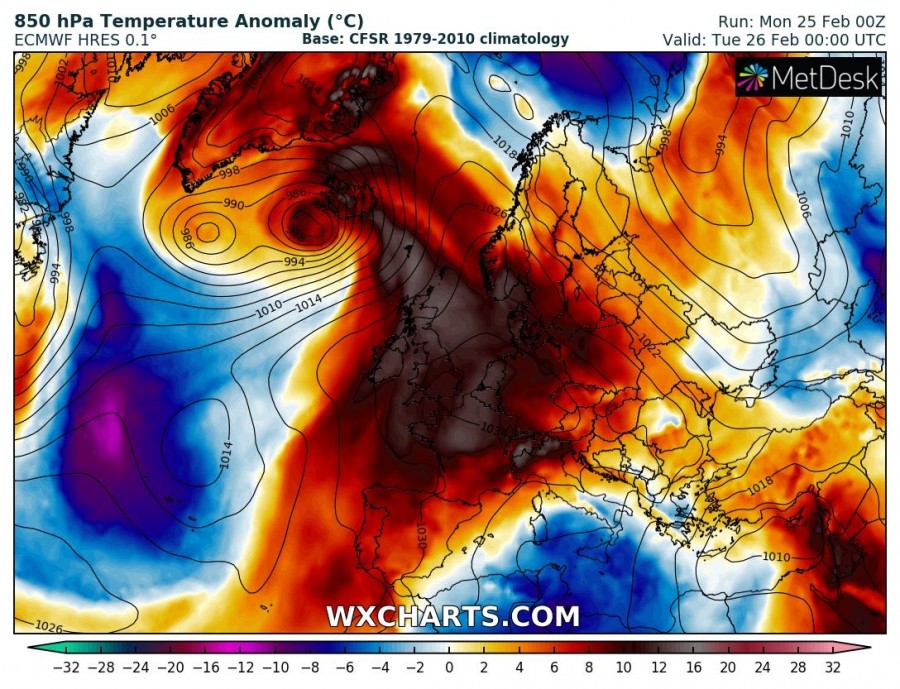 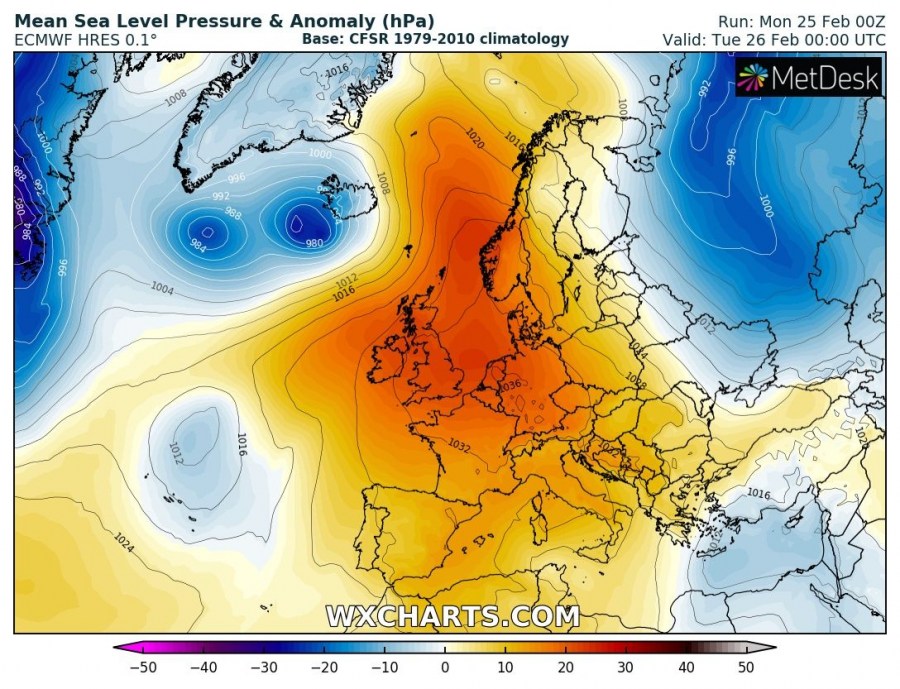 The upper ridge gradually weakens, but still remains very strong, its center is slowly being pushed towards the east. Impressive warmth remains over the western, central and northern Europe. The deep trough/low from the Azores pushes towards the Iberian peninsula and weakens. A short wave trough drifts south across southeast Europe and brings cooler weather into the Black sea region. A deep cyclone moves into the Norwegian sea after it passes Iceland and brings very windy conditions into Norway. 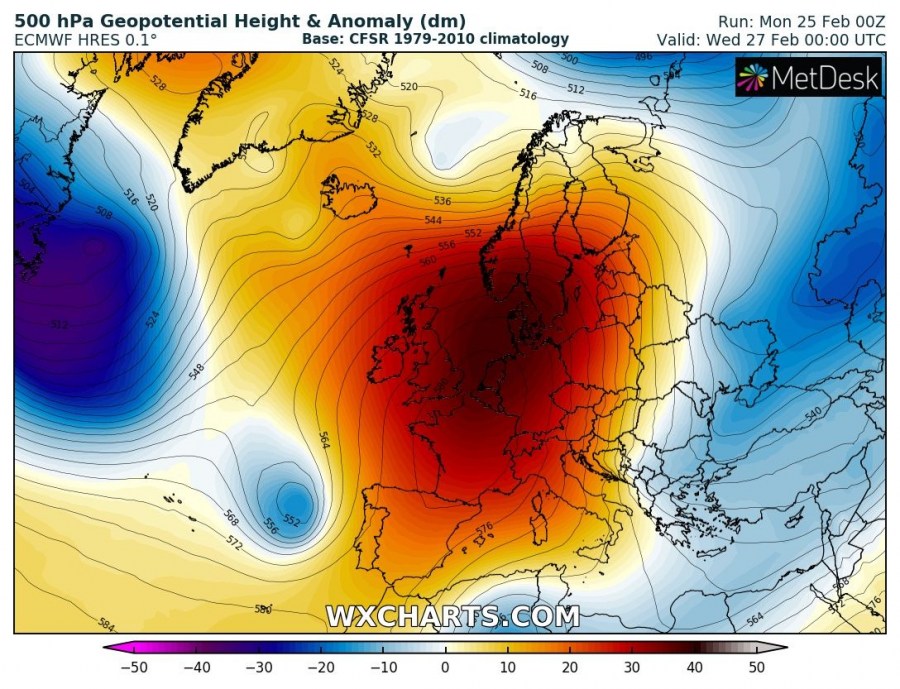 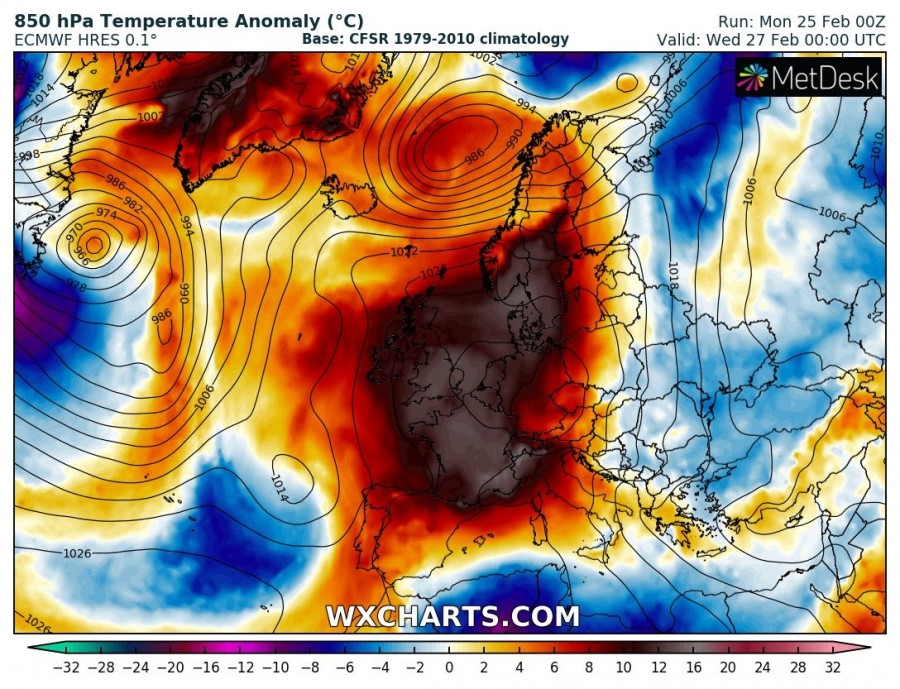 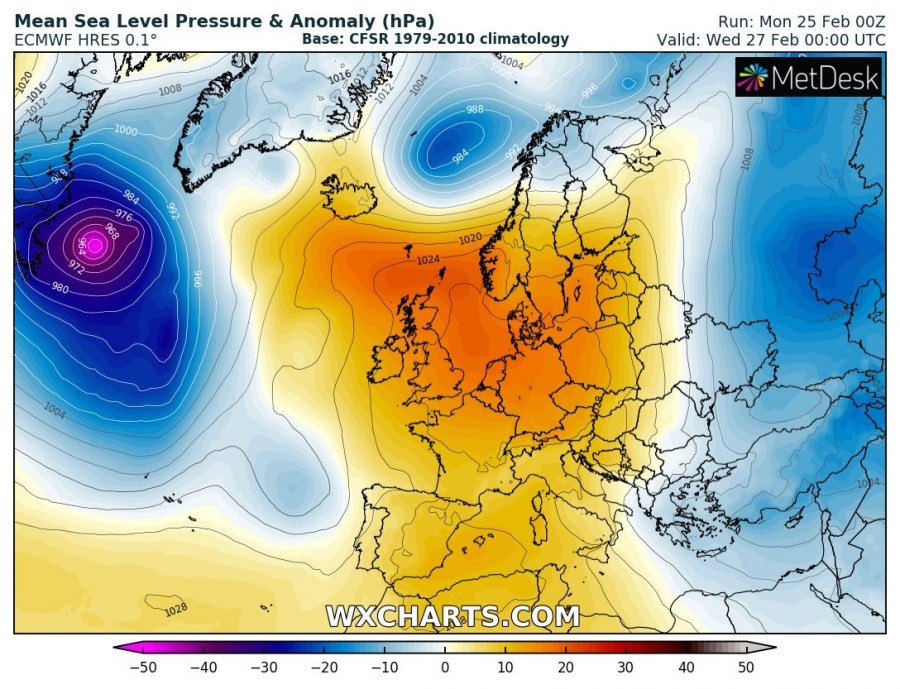 The upper ridge continues weakening and remains centered over the west-central Europe. A short-wave/cyclone moves from the Norwegian sea across Fennoscandia into northwest Russia and brings much colder weather into the Lapland region. The trough over southeast Europe deepens and brings much colder weather for Turkey. A very deep trough with an intense cyclone develops across the northwest Atlantic. The shallow low from near the Iberian peninsula moves into the Bay of Biscay and turns east towards France. 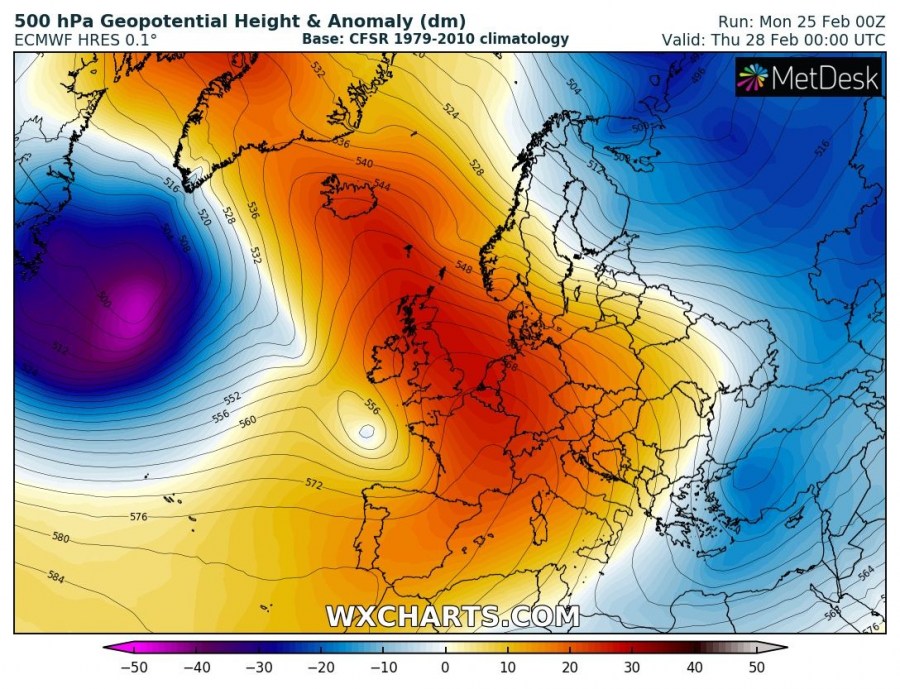 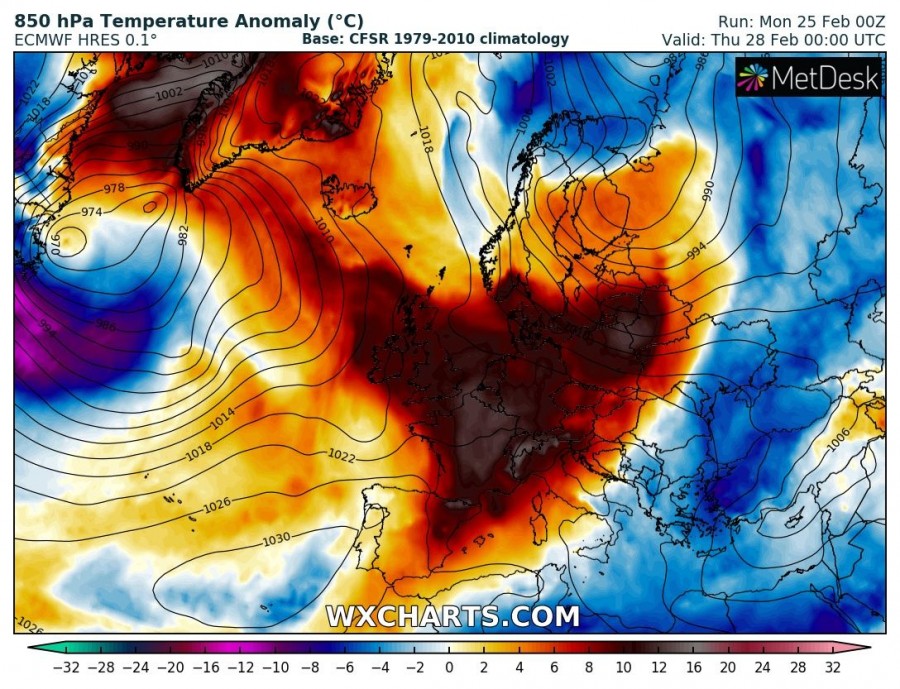 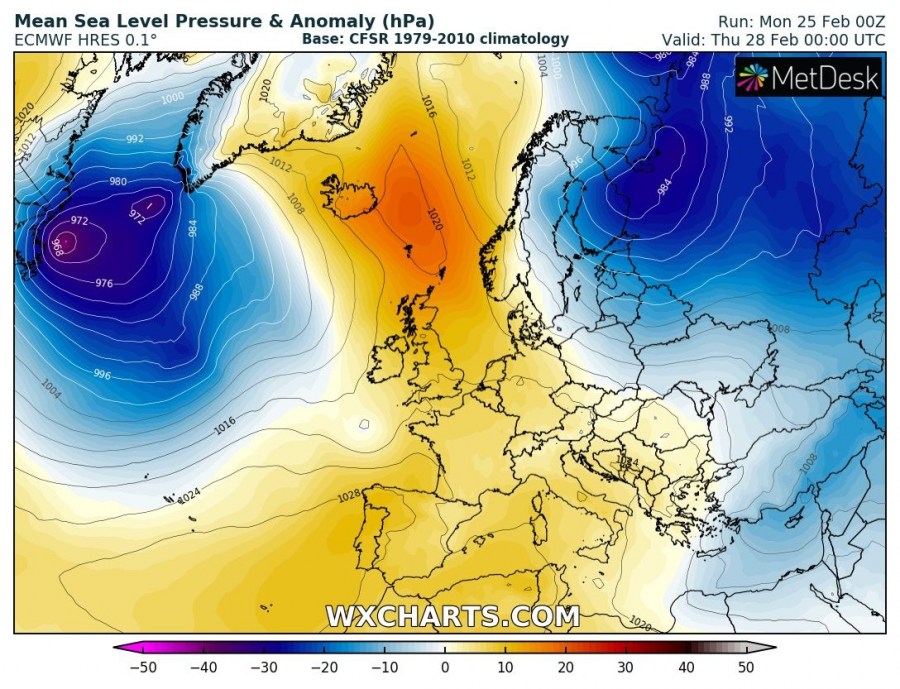 The upper ridge is weakening further while a very deep trough develops into the north Atlantic. A large low pressure system with several cyclones establishes. The trough/cyclone from northwest Russia continues south and affects eastern Europe and Fennoscandia with much colder weather. The intense warmth across the west-central Europe finally dissipates. The shallow trough over France continues towards the Alps. 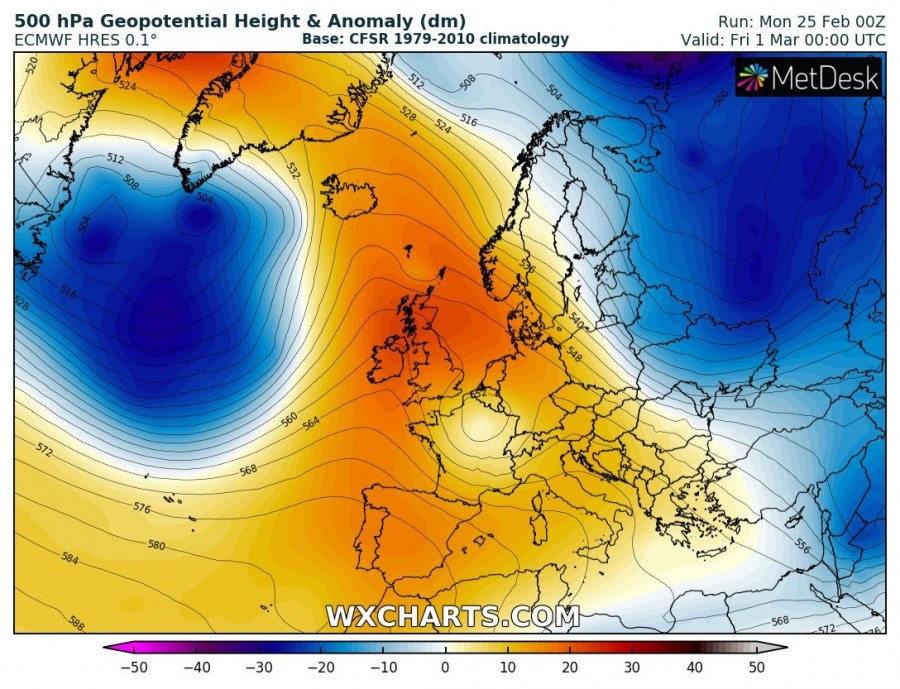 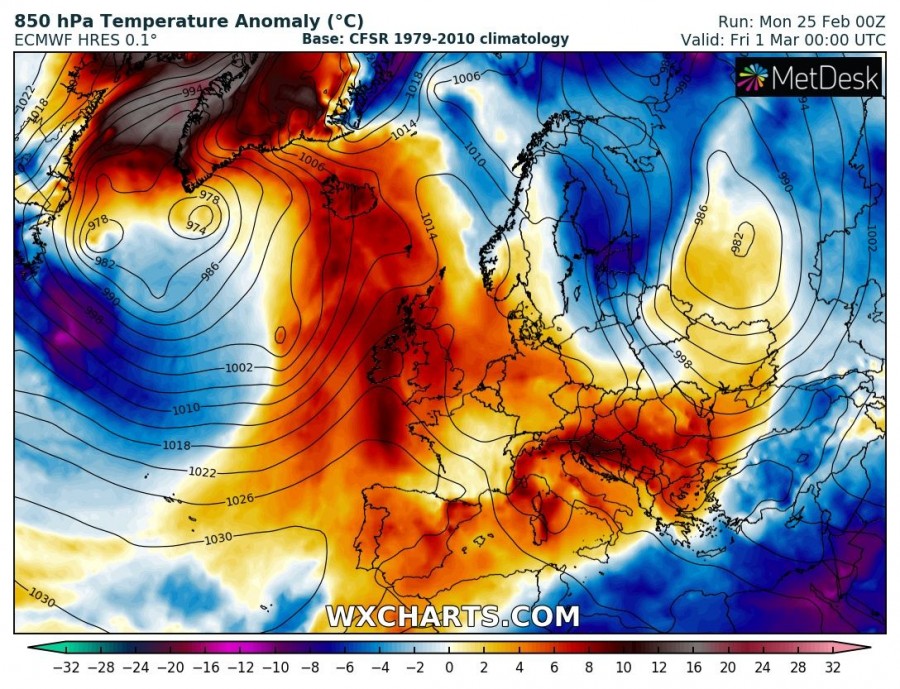 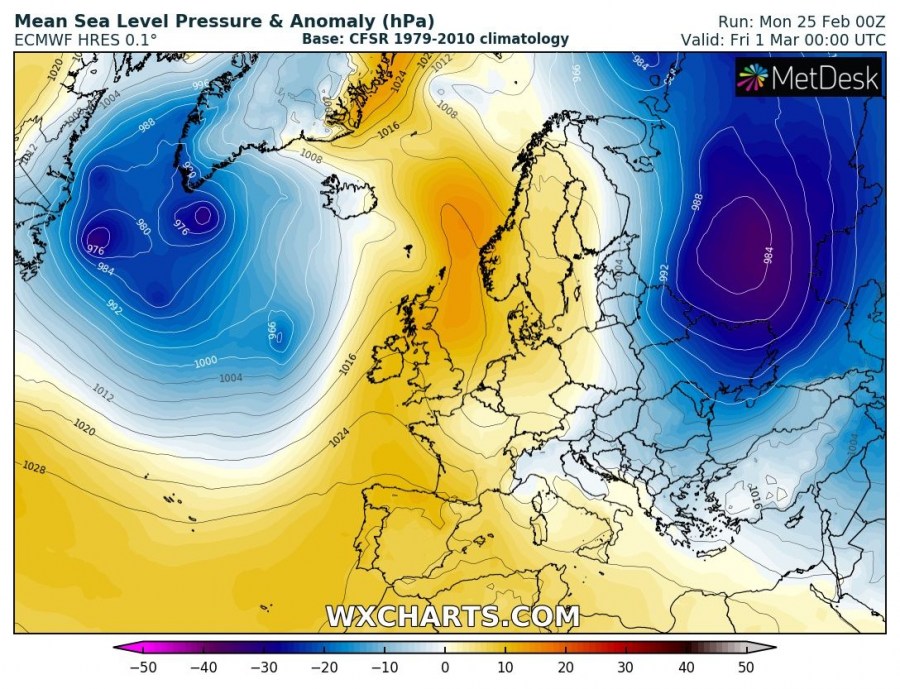 The upper ridge is almost gone, its center remains over the North Sea region. The deep trough with several cyclones remains over the north Atlantic, while one of the surface lows hits Iceland. The shallow upper low moves across the Alps and continues towards the central Mediterranean. An intense cold outbreak moves across the ESE Europe (Belarus and Ukraine) towards the south. 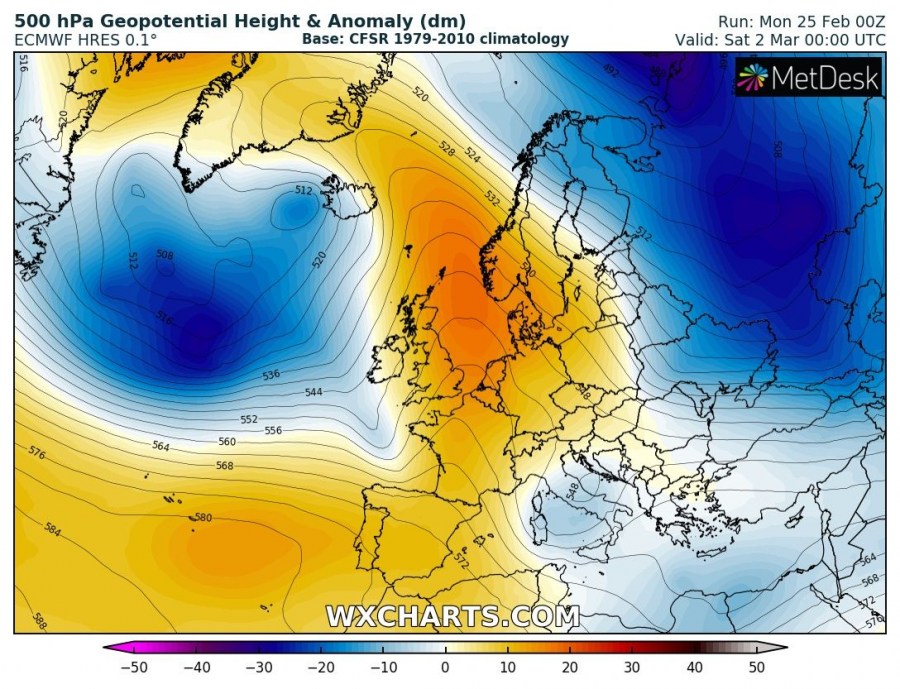 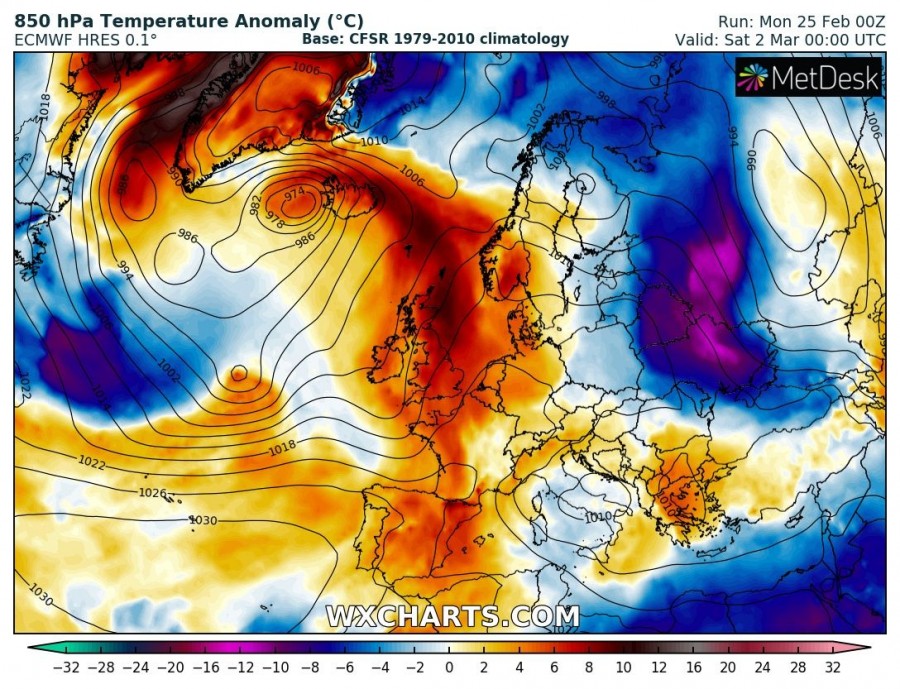 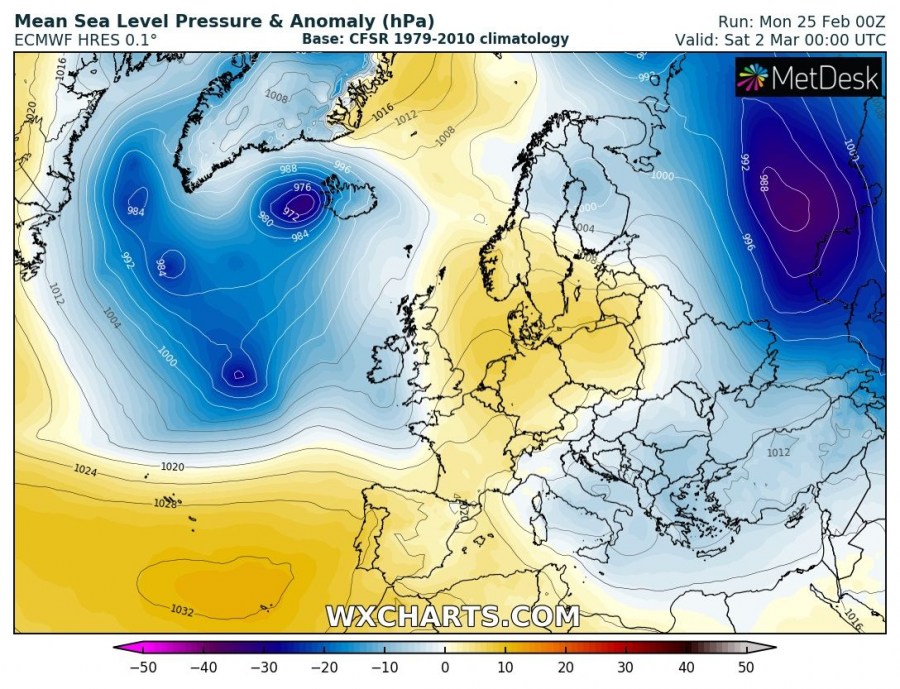 A deep Atlantic trough moves closer to western Europe as a more zonal flow establishes across the Atlantic. An associated deep cyclone pushes into the British Isles and Ireland with a potentially intense windstorm. The remnants of the upper ridge move from the North Sea into the Baltic region while at the same time a deep trough across the western Russia results in weakening cold outbreak across the southeast Europe. A shallow trough/cyclone continues across the eastern Mediterranean region. 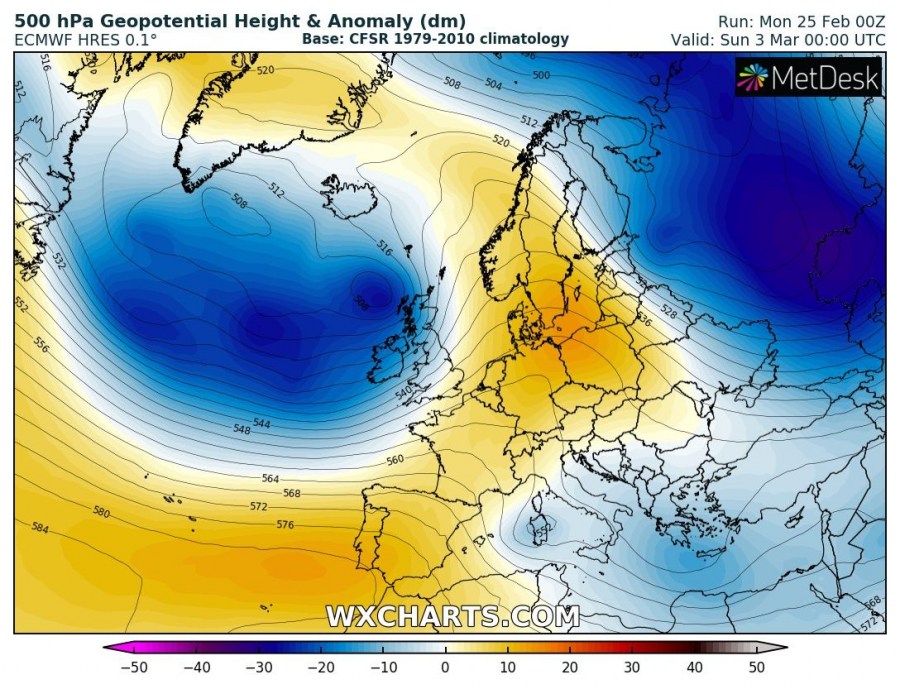 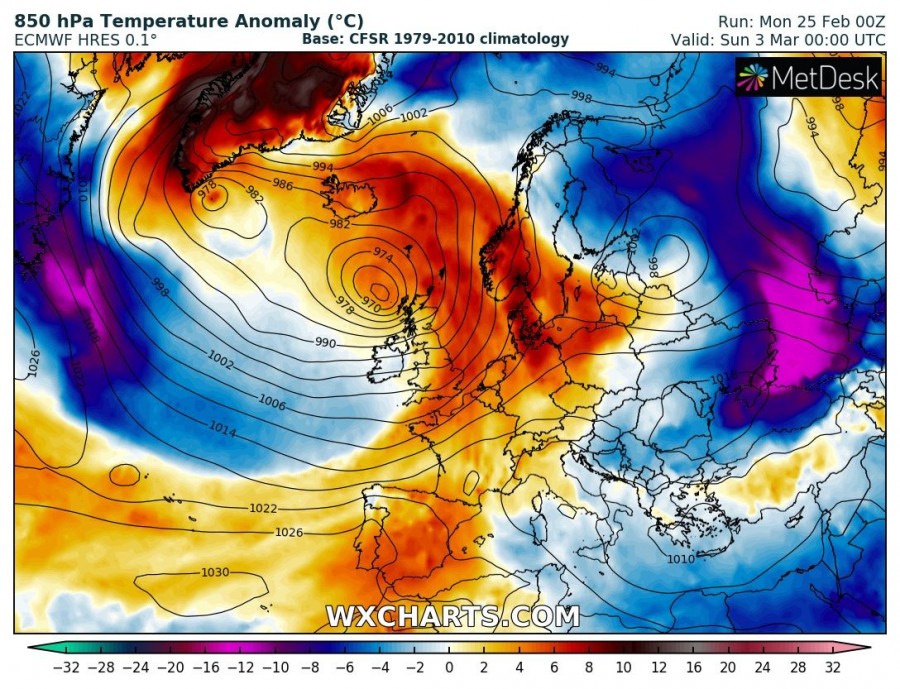 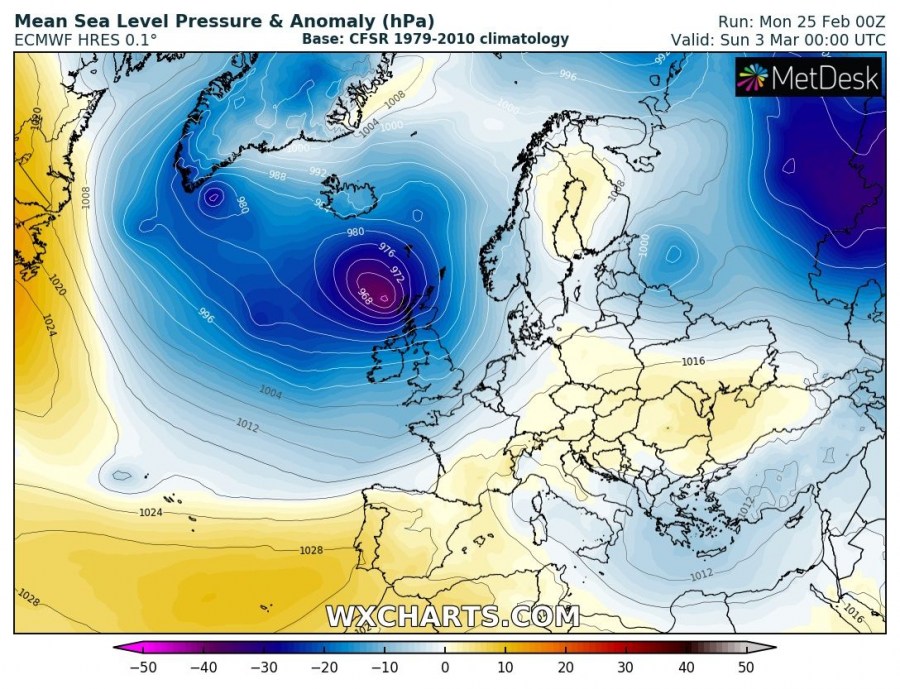 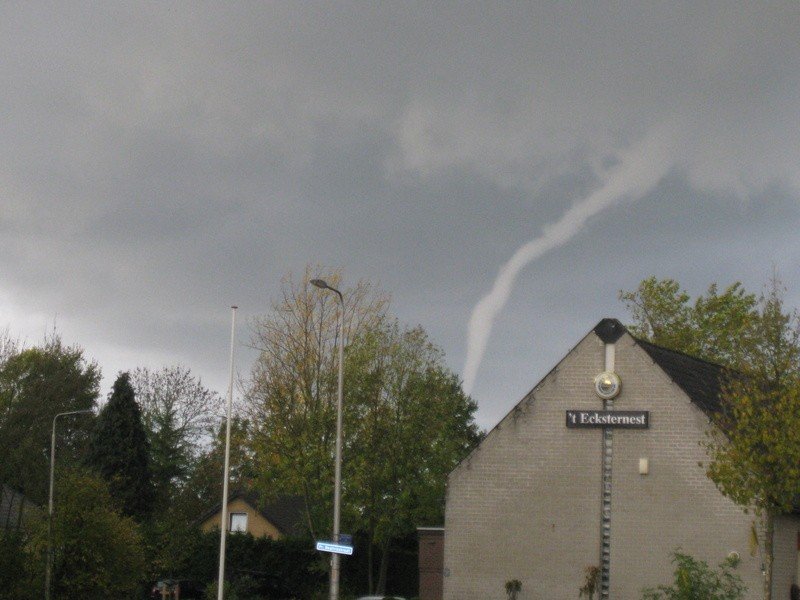 A deep trough establishes across western Europe with a very intense cyclone pushed across Scotland and Faroe Islands towards Scandinavia. Warm advection ahead of the low spreads into the Baltic region and Scandinavia while the associated cold front pushes towards central Europe and the Iberian peninsula. 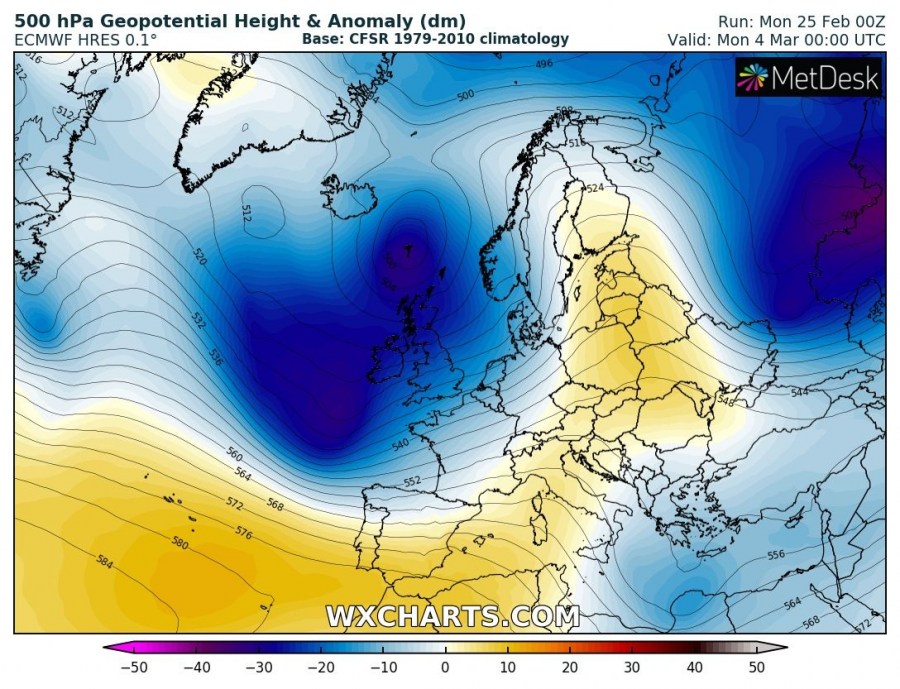 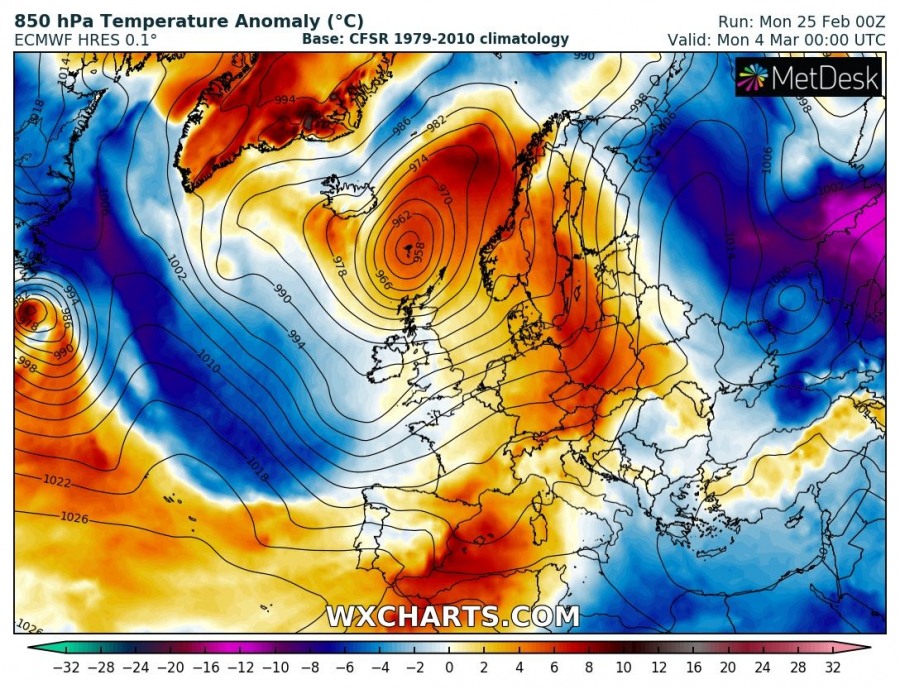 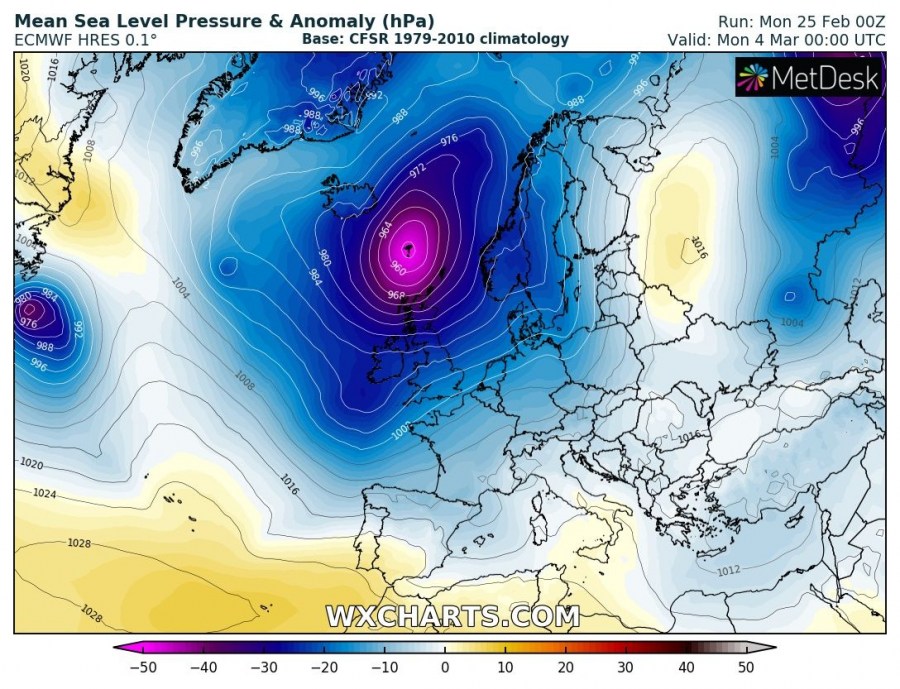 Stay tuned for additional more detailed outlooks on the pattern evolution though the coming days.