A broad cutoff upper low is located over the Atlantic just west of the Iberian peninsula. Ahead of the low a significant overlap of instability and shear is building up an environment conductive for the formation of severe thunderstorms. We take a closer look.

A moderately strong subtropical jetstreak rounds the southern edge of the cutoff low, passing over southern and eastern Spain and the Balearic Islands. Winds up to 30-40 kt are present at 500 mbar level. Moderate to locally strong instability is building up, as easterly surface winds advect moist air from the western Mediterranean. Various models are in good agreement that up to 2000 and locally up to 3000 J/kg MLCAPE will build up in eastern Spain, providing a highly unstable environment. Deep layer shear up to 30-40 kt will be supportive for development of severe thunderstorms. Isolated initiation is expected across southern and eastern Spain by mid-afternoon, with thunderstorms remaining isolated and discrete for quite some time, before merging in clusters / MCS by early evening. Particularly favourable conditions for severe thunderstorms will be present along the eastern coastal part of Spain, where peak overlap of instability and wind shear will be present. Easterly winds up to 15 kt will enhance low level shear and storm-relative helicity. The main threats with any thunderstorm in the area will be torrential rainfall, large to very large hail (>5 cm possible) and severe straight line winds. The coastal zone will also see enhanced tornado threat.

SBCAPE over the region on Monday. Values up to 2000-3000 J/kg expected. AROME model. Map: Wxcharts.eu 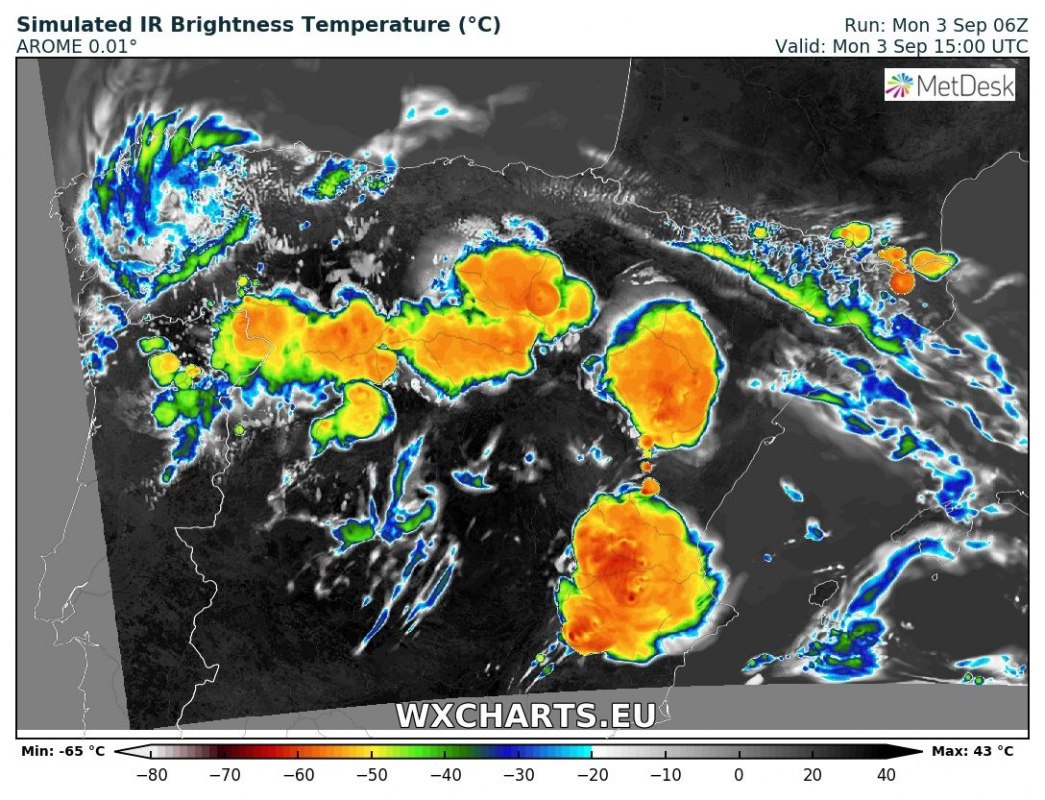 Expect storms to move over the western Mediterranean and the Balearic Islands in the second half of the night with continued threat for torrential rainfall, severe winds and large hail.