Let us take a look over the pattern evolution through the remainder of January – very dynamic weather is expected due to effects of the Polar Vortex split earlier this month. Particularly the western half of Europe and Mediterranean will see deep troughs and cyclones, bringing locally severe weather with intense snowfall, blizzard conditions, severe winds and excessive rainfall with flooding threat as well. Let us get into details on each day – attached are 500 mbar, 850 mbar and mean sea level pressure anomaly maps.

A shallow, but large upper trough/low is located over the central Europe and Mediterranean region, maintaining cold weather on its back side across the west/southwest Europe, central Europe and western Mediterranean. Two deep troughs are located over the northern Atlantic and the northwest Russia, resulting in strong cold advection into these regions. A deep cyclone forms over Iceland. 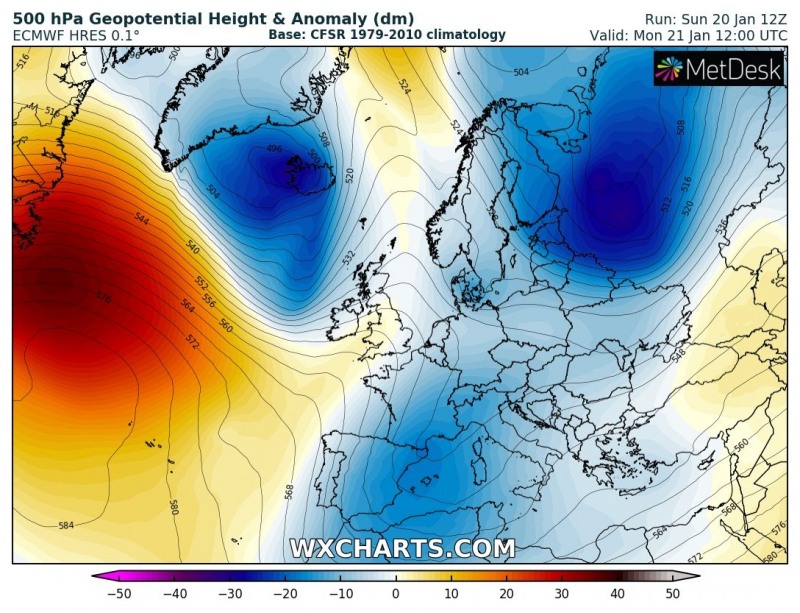 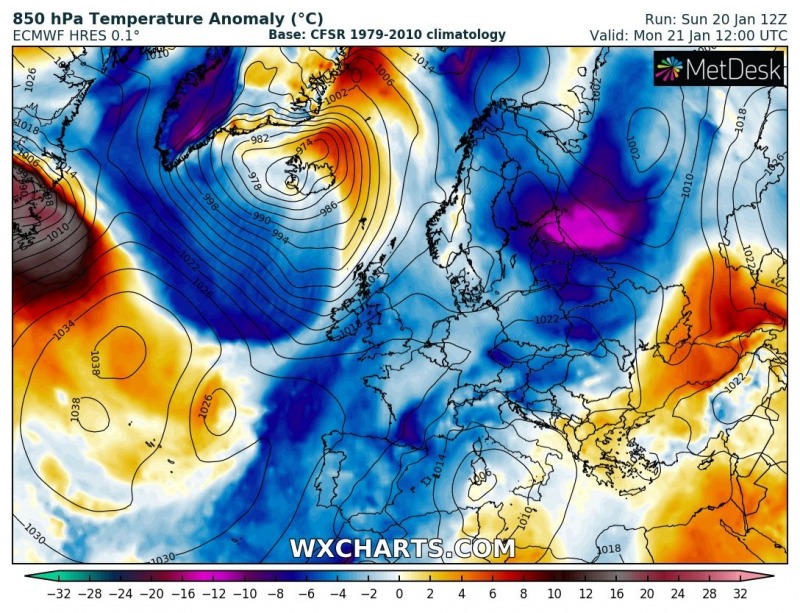 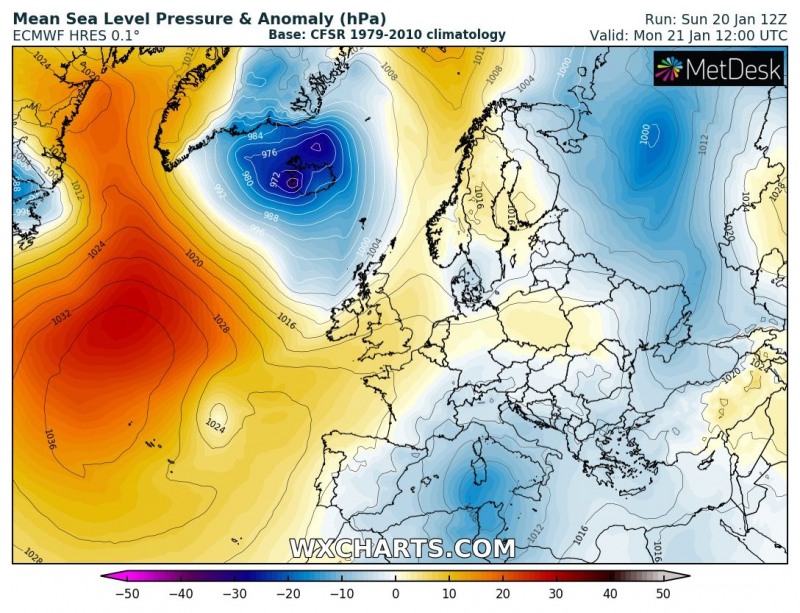 A deep trough from the north Atlantic pushes into the western Europe while the deep trough over northwest Russia pushes further east and an intense cold outbreak moves into western Russia. With the advection of much colder airmass into western Europe, the trough over the Mediterranean begins strengthening and cyclone deepens over the central Italy. Cold weather maintains across the west, southwest, central and southern Europe. 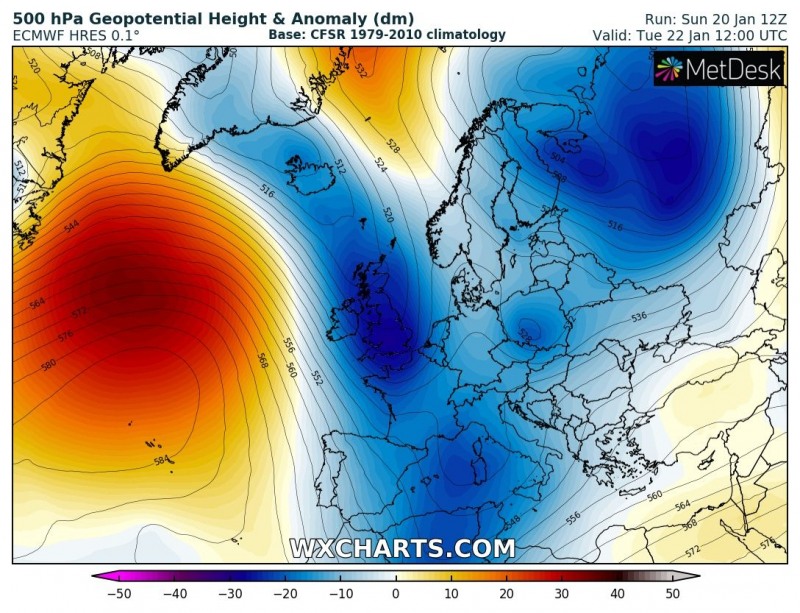 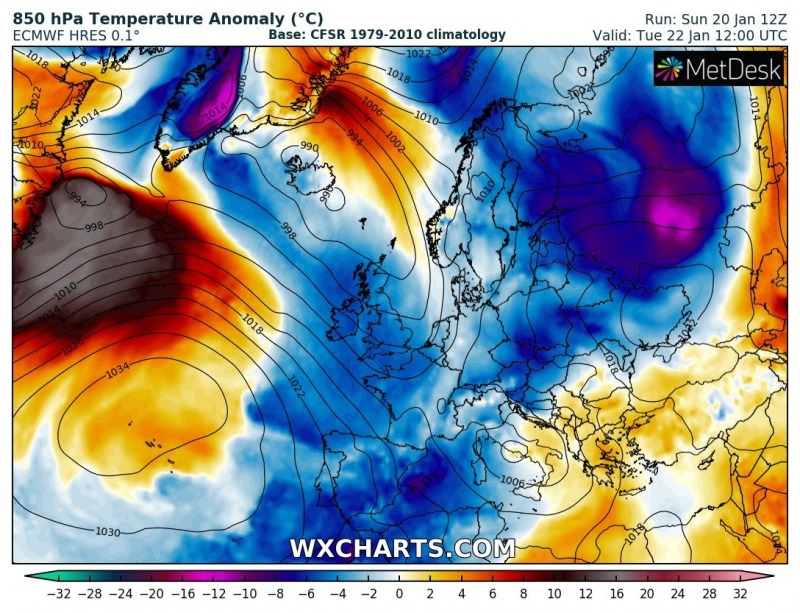 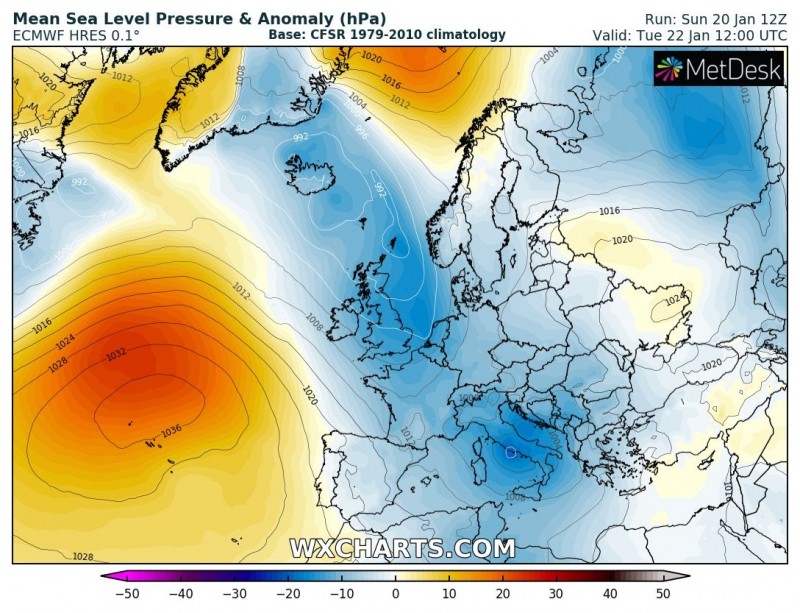 The trough over northwest Russia dissipates while the trough from the western Europe significantly strengthens while moving across France towards the Mediterranean. In response, a large deepening cyclone expands across the Mediterranean and central Europe. Much colder airmass advects behind the trough into France, the Alps and the northwest Mediterranean. The ex-Noreaster’ cyclone from the northeast United States pushes towards Greenland and brings significant warm advection across the northern Atlantic. Warm advection brings milder weather into the southern Balkan peninsula and the southeast Europe. 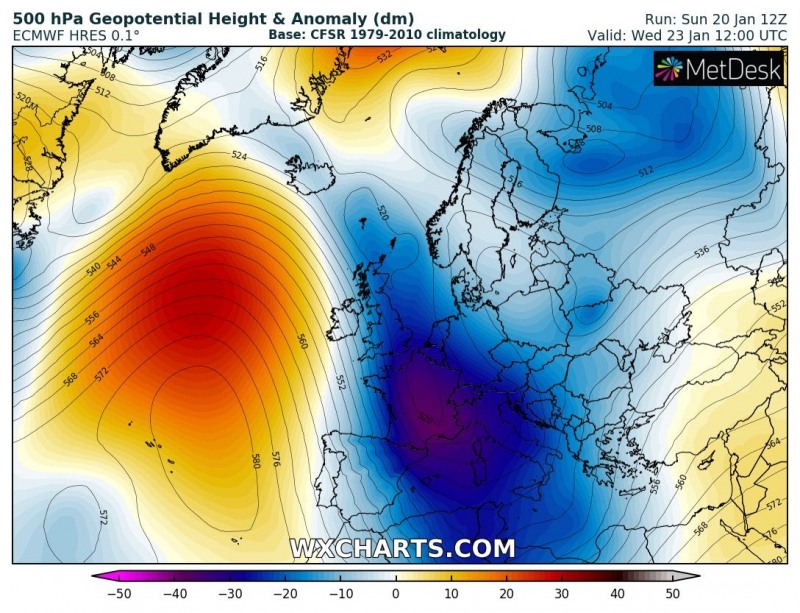 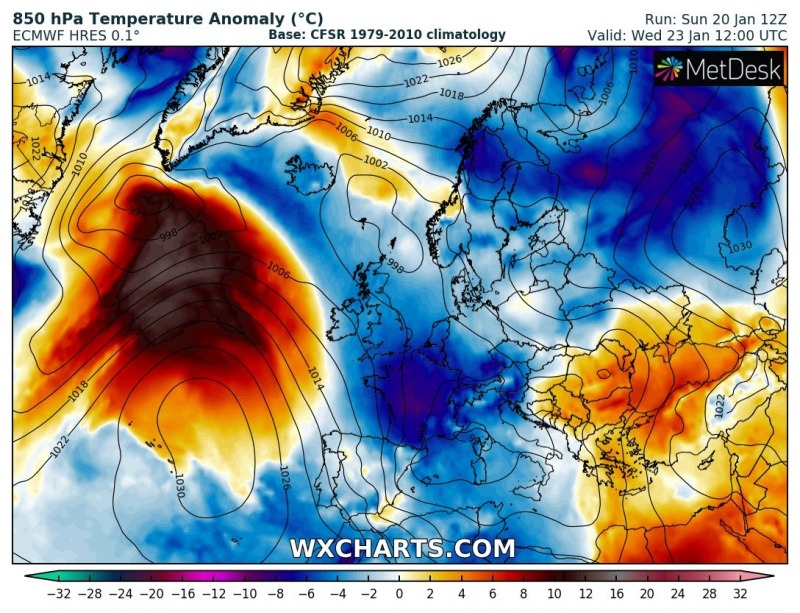 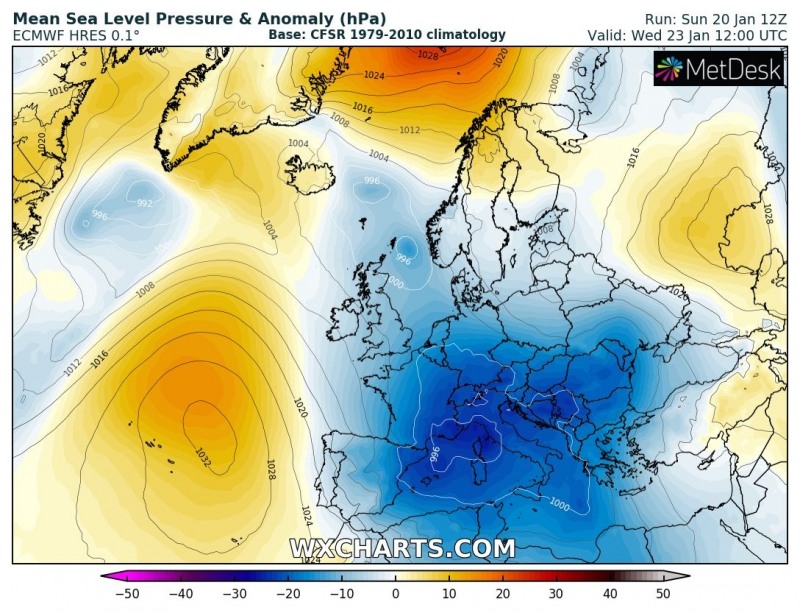 A very large and deep trough dominates Mediterranean region, partly also central Europe, north Africa and the western Balkan peninsula. Very cold airmass maintains across the Alps and also spreads across the western Mediterranean and reaches north Africa (northeast Algeria and north Tunisia) as well. A very deep surface cyclone is located over the Tyrrhenian sea and results in strong southerly winds across south Italy and the Adriatic sea, bringing excessive rainfall/snowfall threat into the region. Warm weather across the southeast Europe continues. 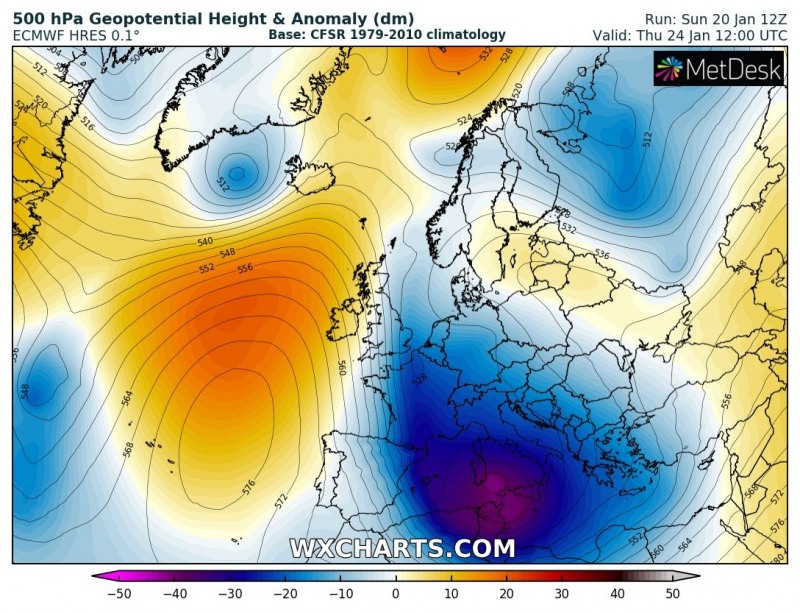 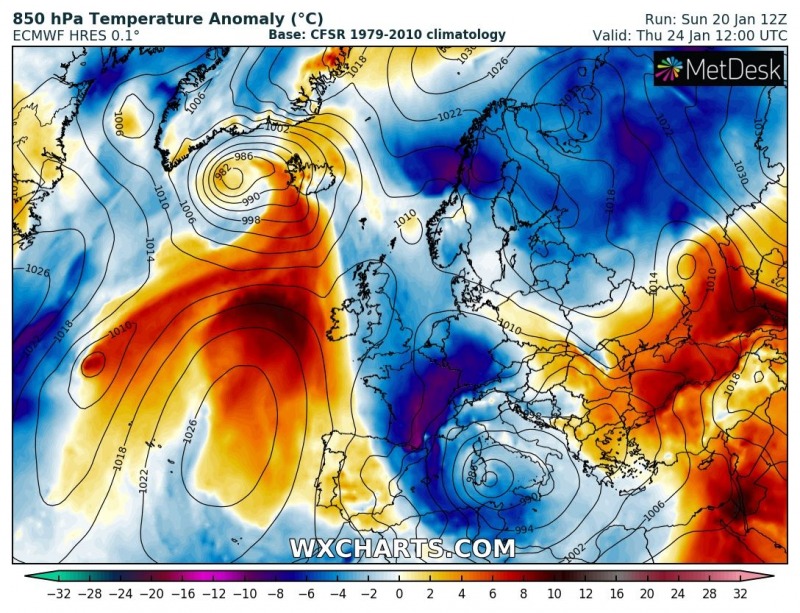 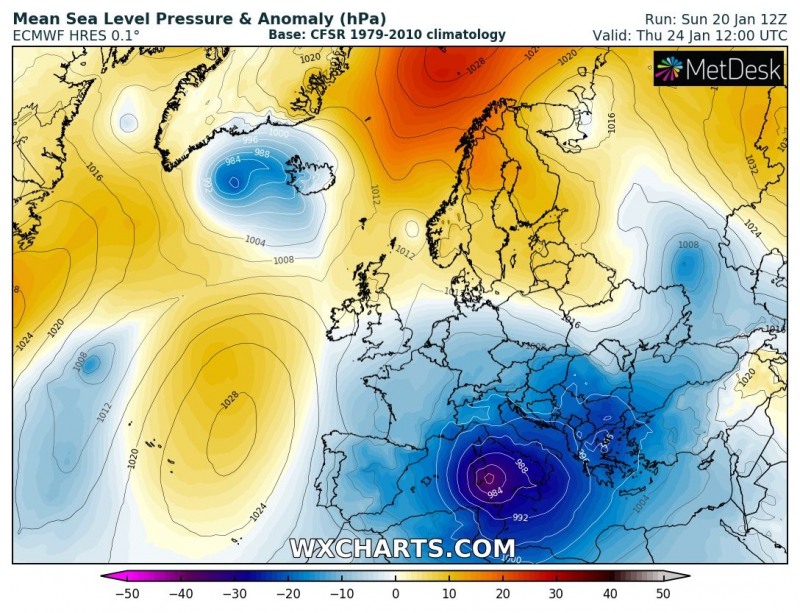 The large Mediterranean trough begins gradually weakening while it maintains its size. The deep cyclone moves across south Italy into the Ionian sea, bringing another day of excessive rainfall across the south/southwest Balkan peninsula. Very cold weather maintains across central Europe, the Alps, France, the western Mediterranean and also spreads into Spain and north Algeria. Two new troughs develop across the north Atlantic and northern Europe with a deep cyclone over Iceland. The deep trough across northern Scandinavia merges with the trough over northwest Russia and pushes another cold outbreak into the region, affecting Norway, Sweden and Finland as well. Warm weather across the southeast Europe continues for another day. 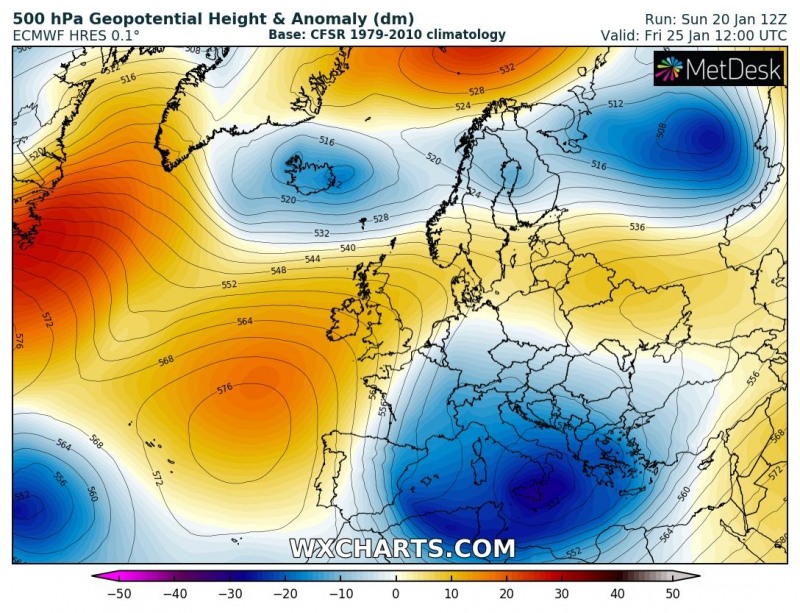 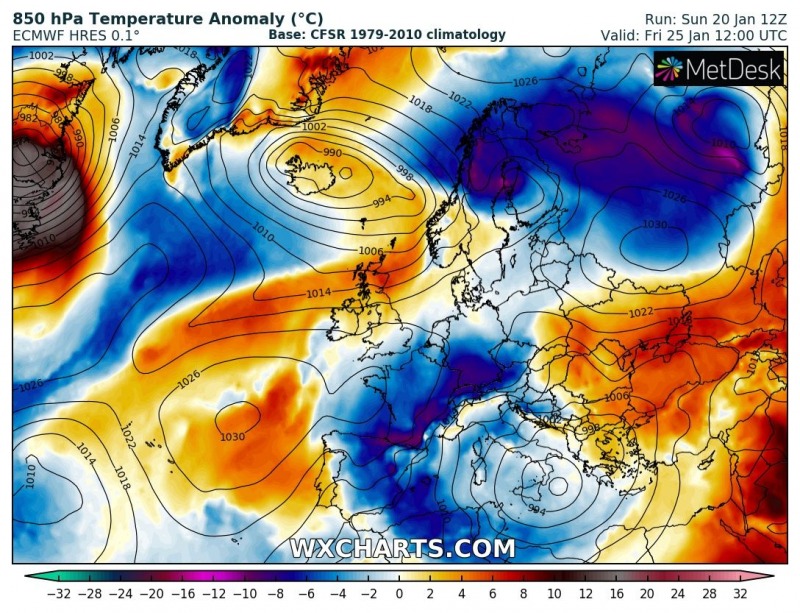 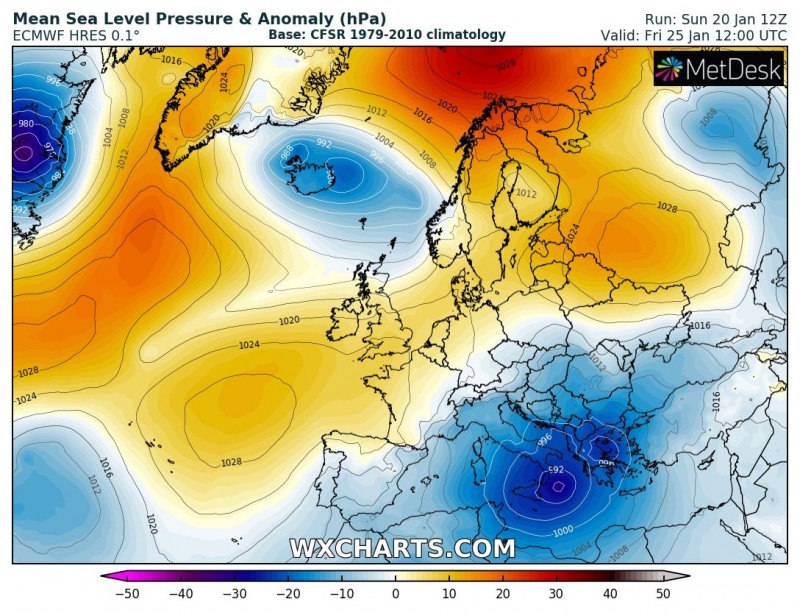 A large Mediterranean trough continues weakening while drifting east across the south-central Mediterranean, very cold advection on its rear side gradually dissipates, but it remains cold. Remnants of the cold pool advect deeper into northern Africa. The trough over the north Atlantic deepens while drifting towards western Europe and a large surface cyclone forms across the northern Europe. It remains extremely cold across Lapland region (north Sweden and north Finland). Warm advection spreads across southern Scandinavia, while warm weather maintains across the southeast Europe. 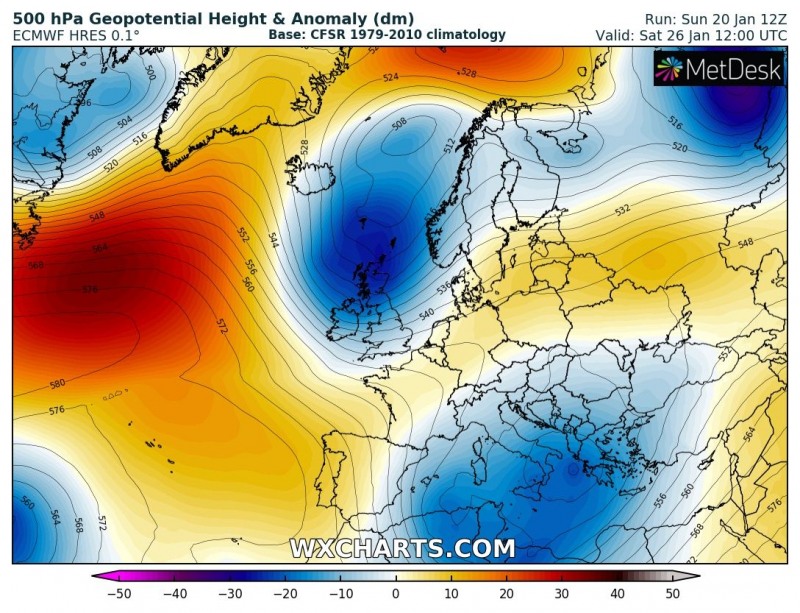 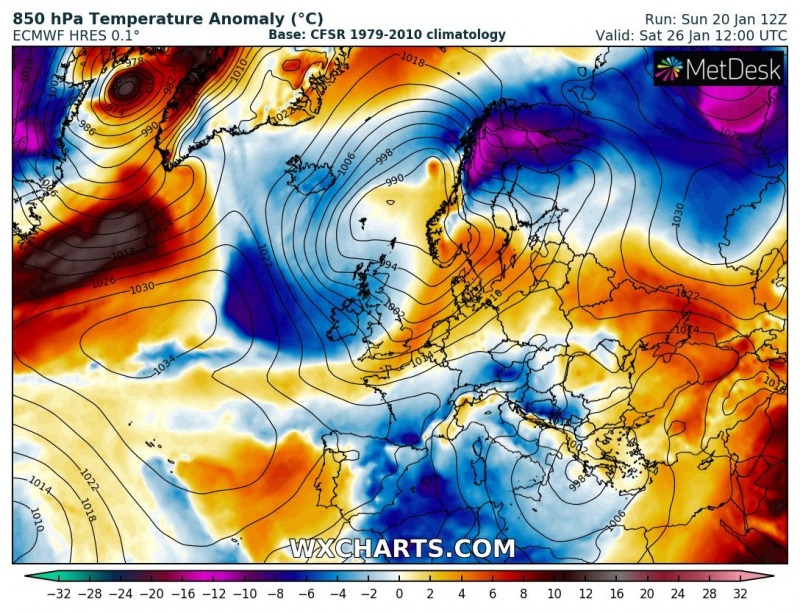 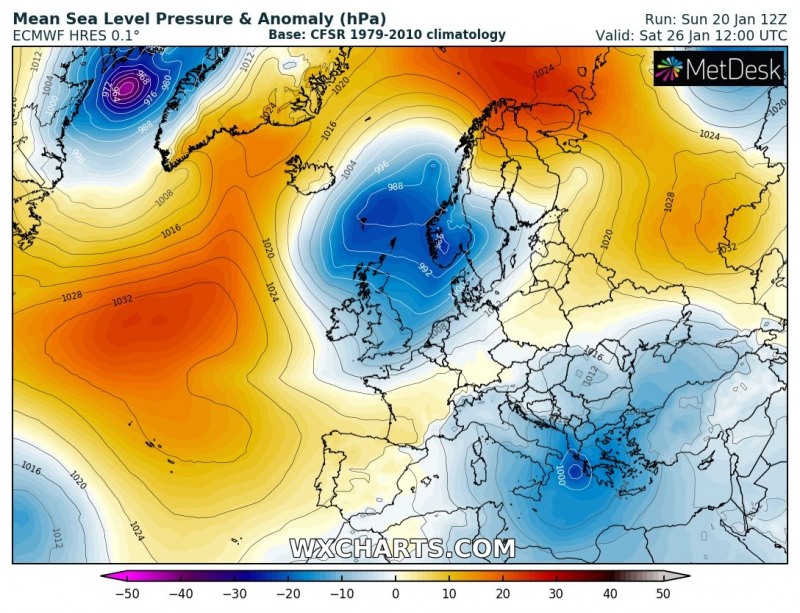 A deep trough moves into the western Europe and continues towards the central Europe, starts yet another cold advection into British Isles and Ireland. Another deep trough/cyclone ejects from Greenland towards Iceland. To the south, the remnants of the large Mediterranean trough gradually deepen again and cold weather maintains over the region, including the Iberian peninsula and north Africa. The deep cylcone across the north Europe gradually weakens, but remains a large system while drifting south/southeast. Warm weather across the Balkan peninsula dissipates, but it maintains across east and southeast Europe. It also spreads into the Baltic region. Very warm day across the Middle East. 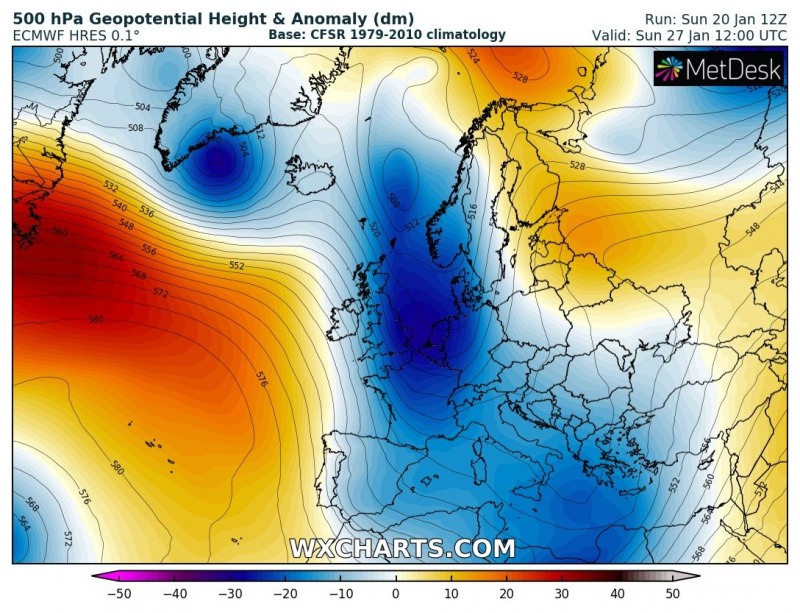 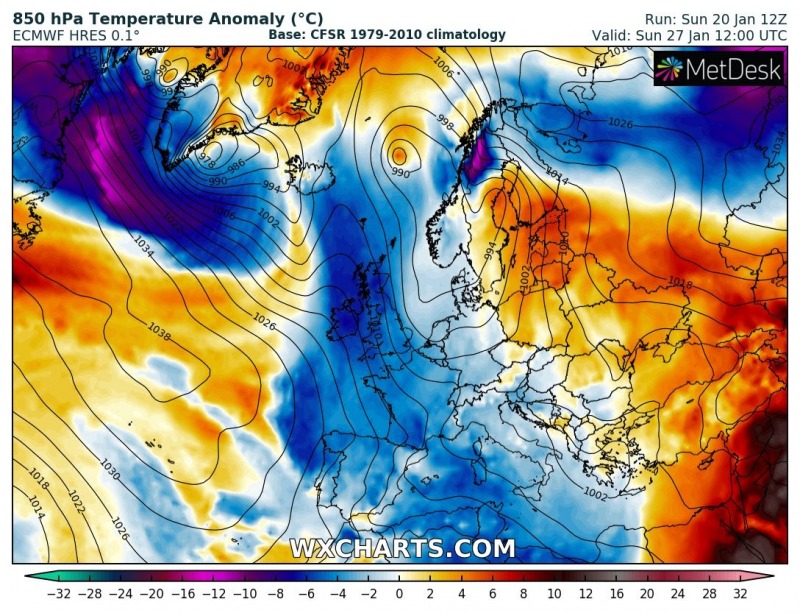 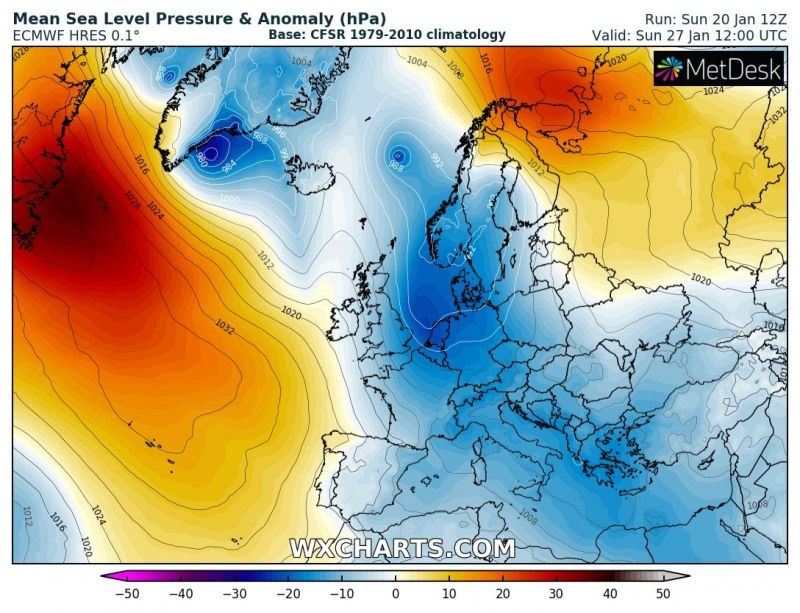 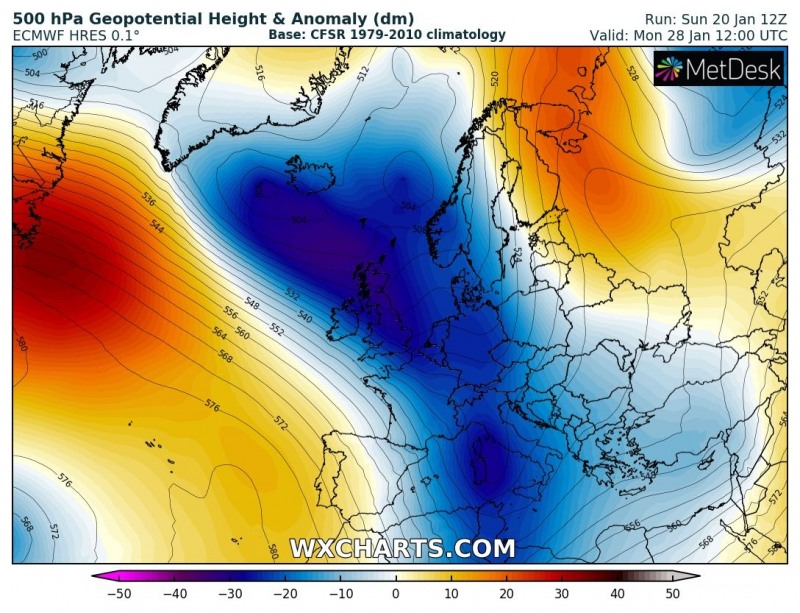 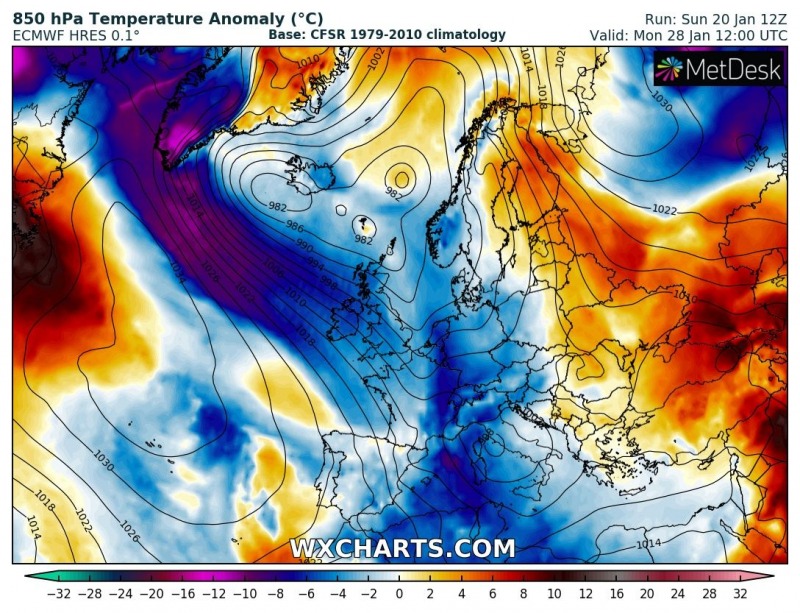 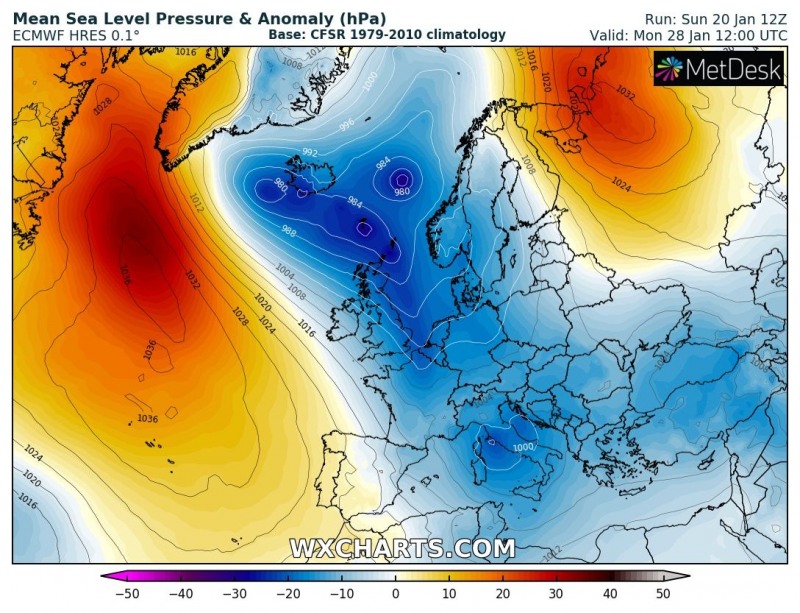 The very large and deep trough maintains over western Europe, while the deep trough over the Mediterranean region weakens with its axis drifting east. Cold weather spreads into western Europe and continues towards the Iberian peninsula. A surface cyclone deepens and is centered over the British Isles. Warm advection maintains across east, northeast Europe and the northern European / Arctic region. 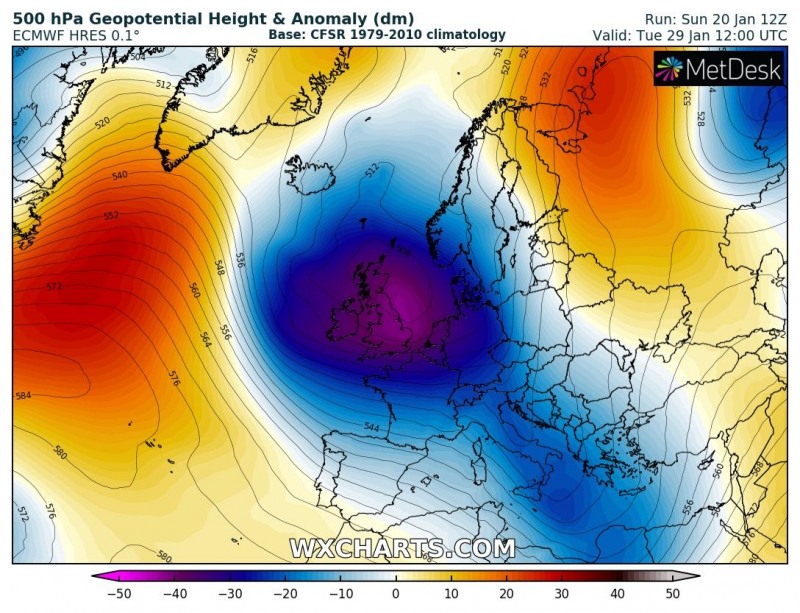 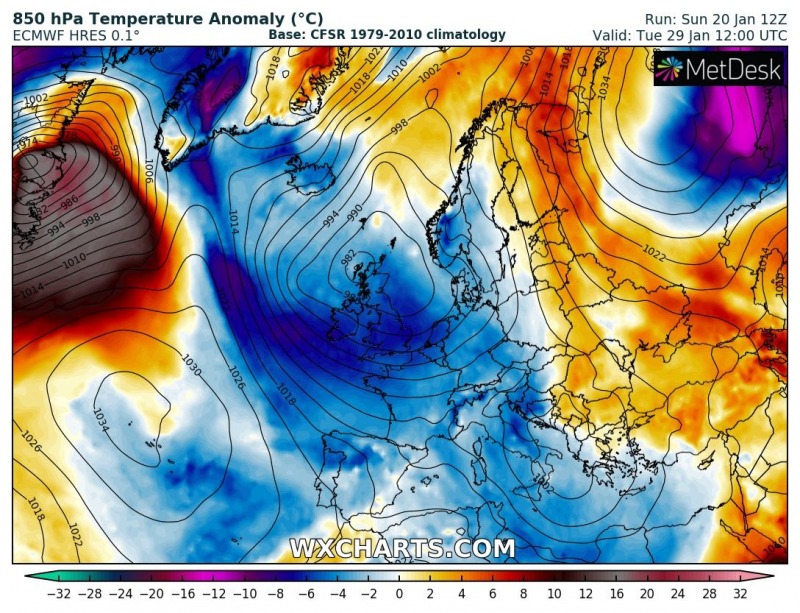 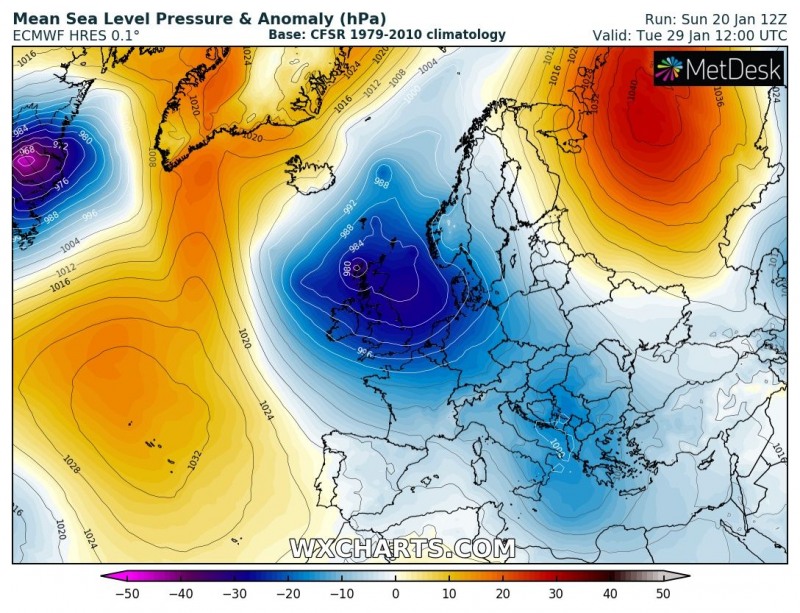 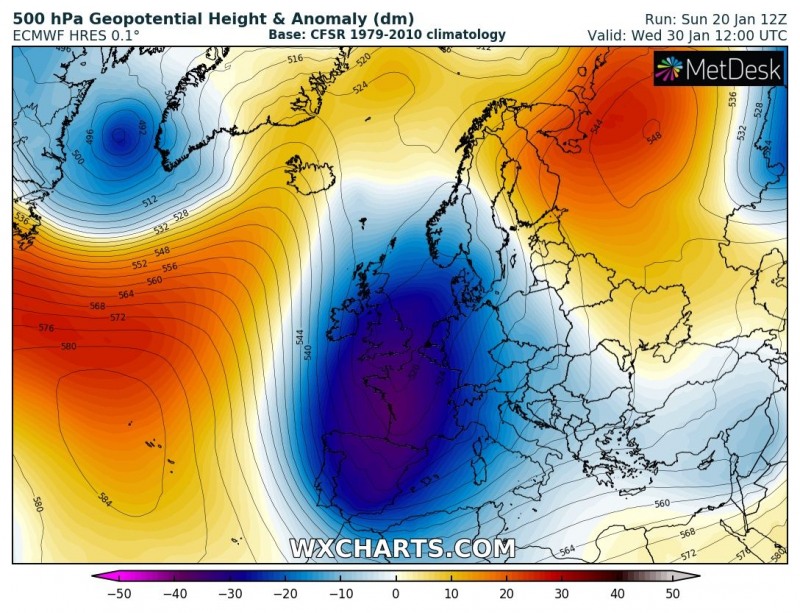 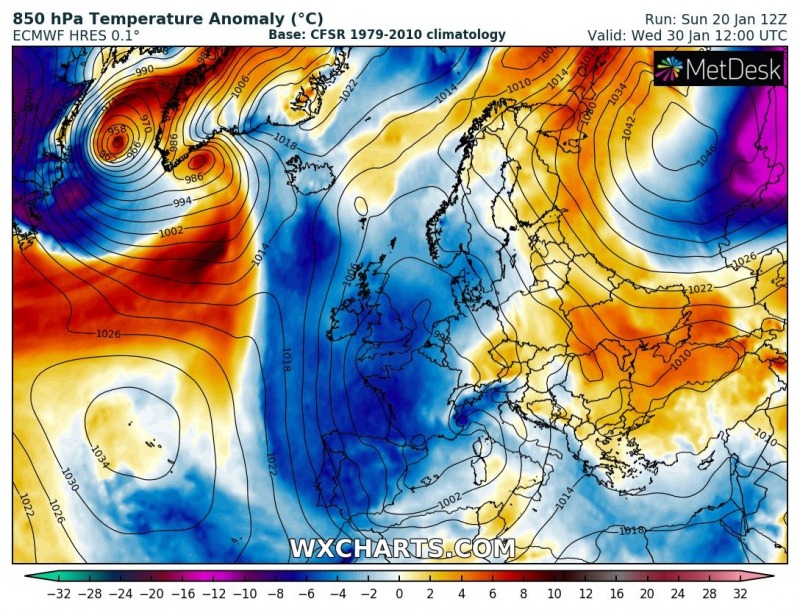 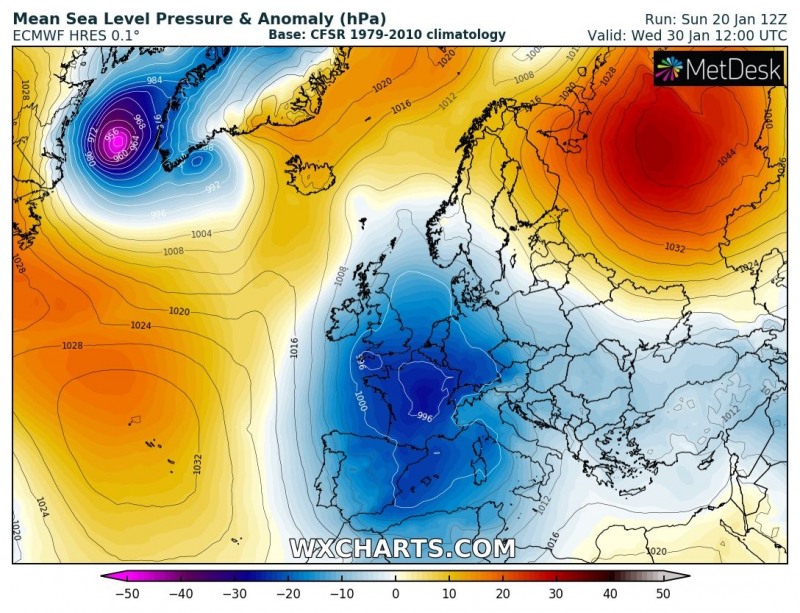 Attached are some of the more interesting days regarding the possibility of falling snow across our continent:

Stay tuned for further updates though the following days!