Yet another week with strong upper-level ridging across our continent, it seems like a neverending pattern is repeating itself. Strong high-pressure systems will continue, supporting above normal temperatures through early January. Lowlands will locally experience colder weather due to thermal inversions, but no snow due to lack of precipitation. Lots of snow is expected for Turkey during the first few days, however. Very dynamic over the North Atlantic and towards Scandinavia, with daily intense cyclones!

A strong upper-level ridge dominates a large part of Europe, while North Atlantic continues with dynamic pattern and intense deep cyclones. An upper low delivers unsettled conditions across the far SE Europe, resulting in huge amounts of snow across Turkey. Stormy over the eastern Mediterranean. Such a pattern favors above-normal temperatures across many regions in Europe, although the lowlands are trapped under strong temperature inversions. Cold advection continues across the Balkans and the south Mediterranean in the wake of the upper low/surface cyclone over the Aegean Sea. 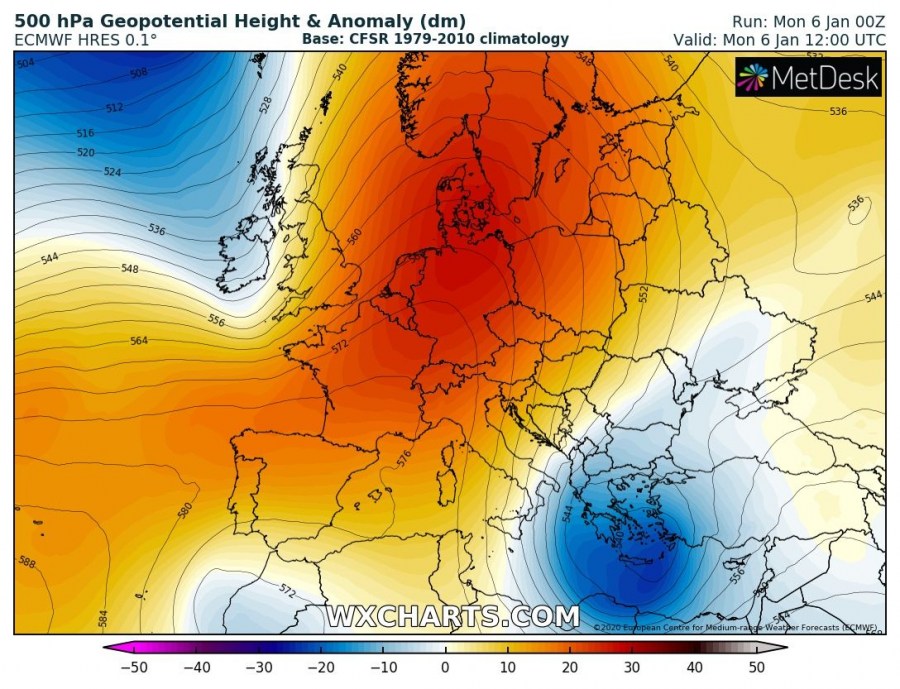 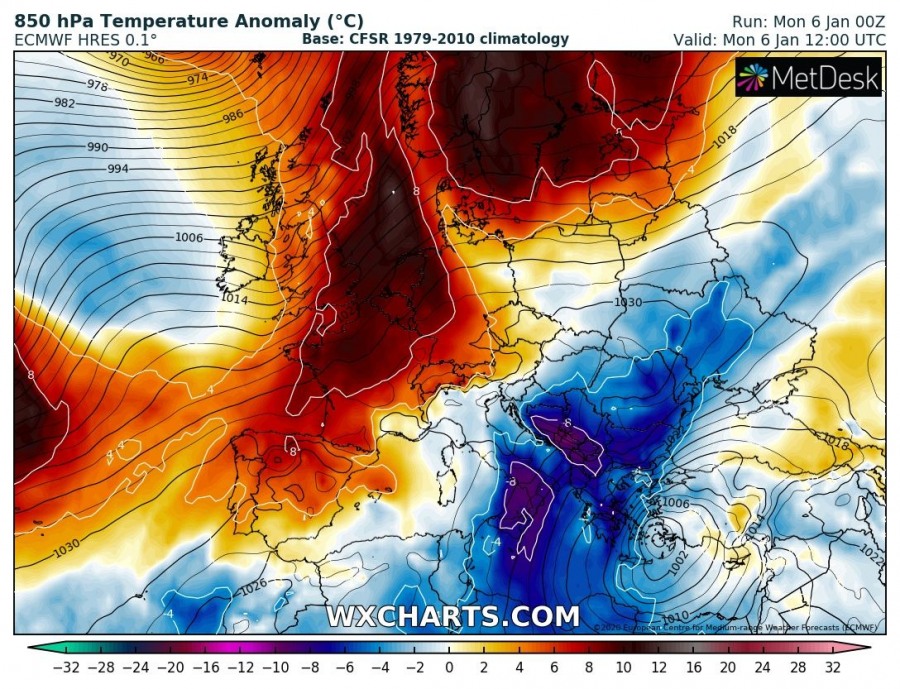 The ridging pattern continues on Tuesday, while the SE European upper low is gradually weakening. However, stormy weather continues over the eastern Mediterranean, delivering lots of snow into west-central Turkey. Flooding threat along coastal southern Turkey. A very deep cyclone over the North Atlantic brings very warm weather into western Europe – more than 10 °C warmer than normal across the UK and North Sea region. Cold pool over the S Balkans begins its weakening trend. 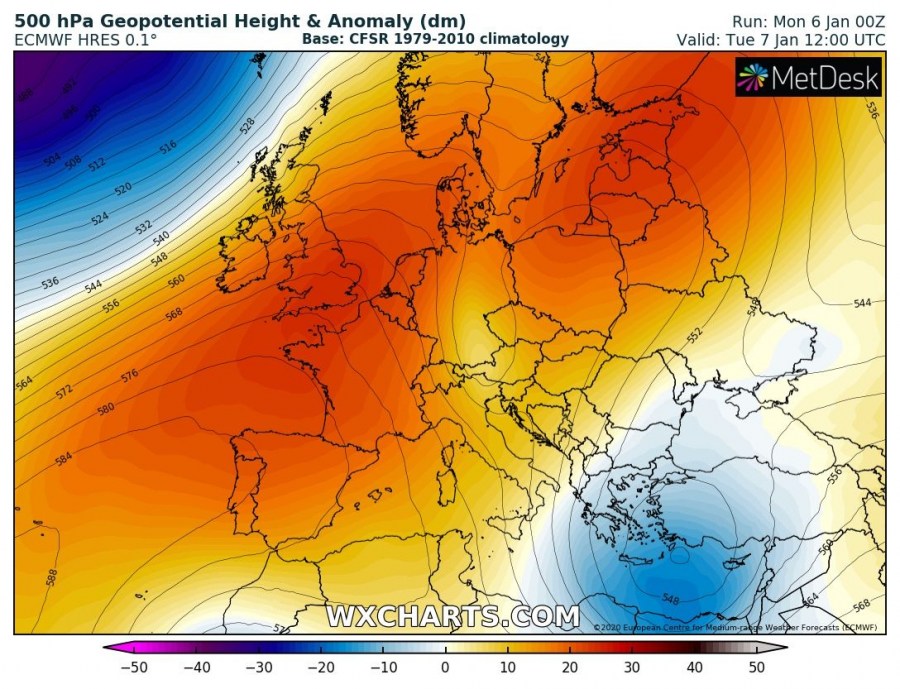 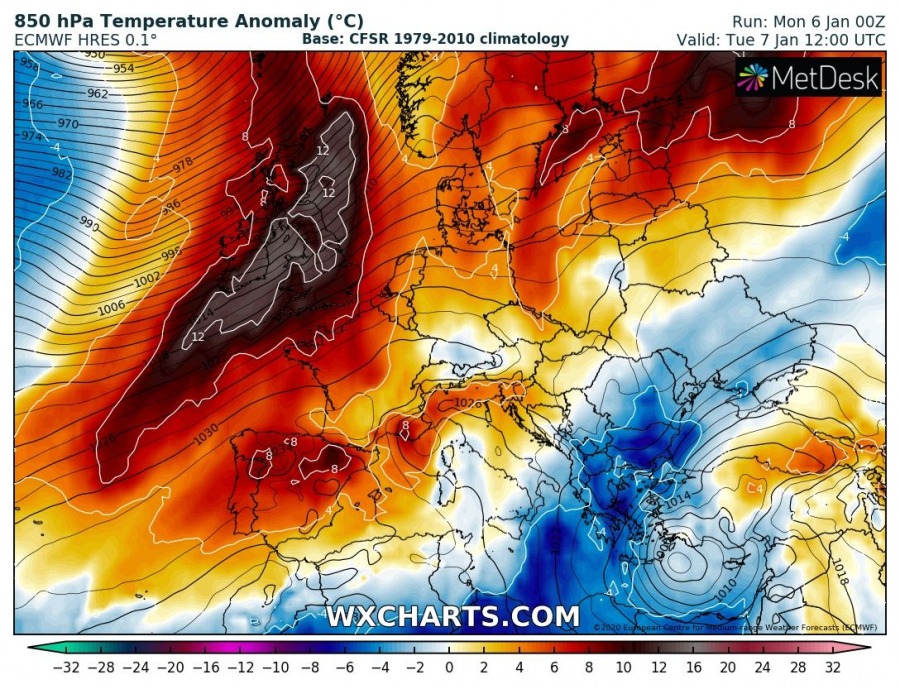 The upper-level ridge becomes more elongated across Europe as deep troughs from the North Atlantic spread into northern Europe as well. Much above normal temperatures remain across a large part of our continent, while quite cold day persists across the southern Balkans. 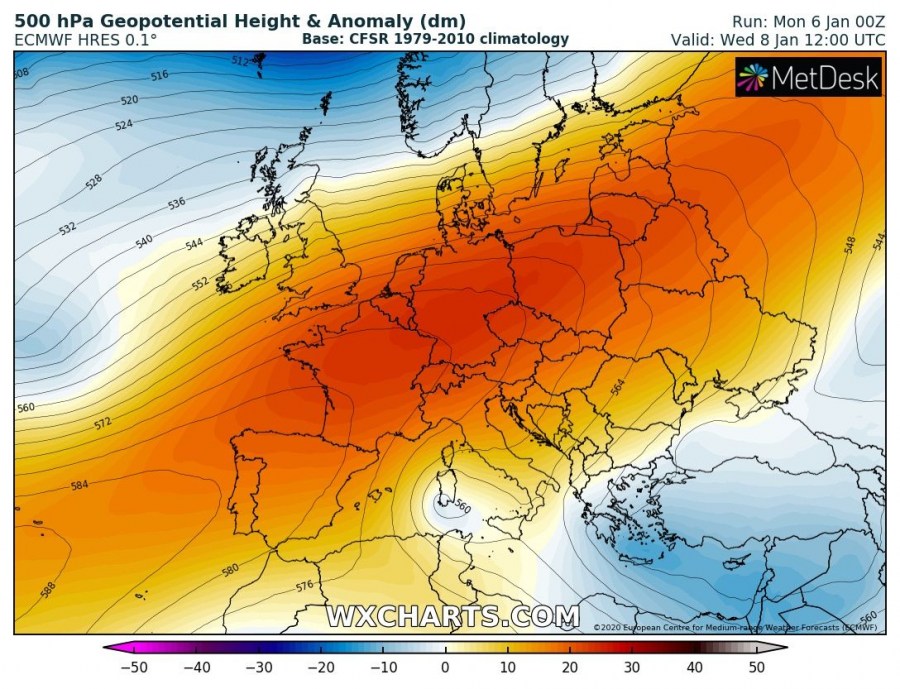 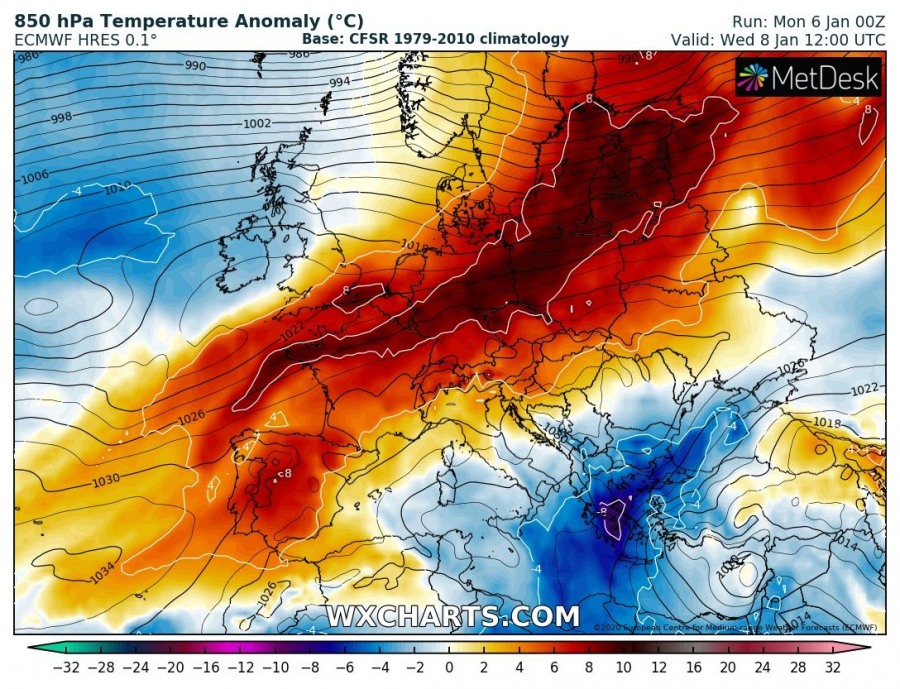 Deep trough over the North Atlantic expands also towards western Europe, resulting in a surface cyclone towards Ireland and the Bay of Biscay. While the upper-level ridge remains over SW, central and eastern Europe. The upper low over the eastern Mediterranean finally weakens and moves into the Middle East where snowfall continues. Above normal temperatures remain across a large part of Europe, near-normal or slightly below normal over the south and the east Mediterranean. 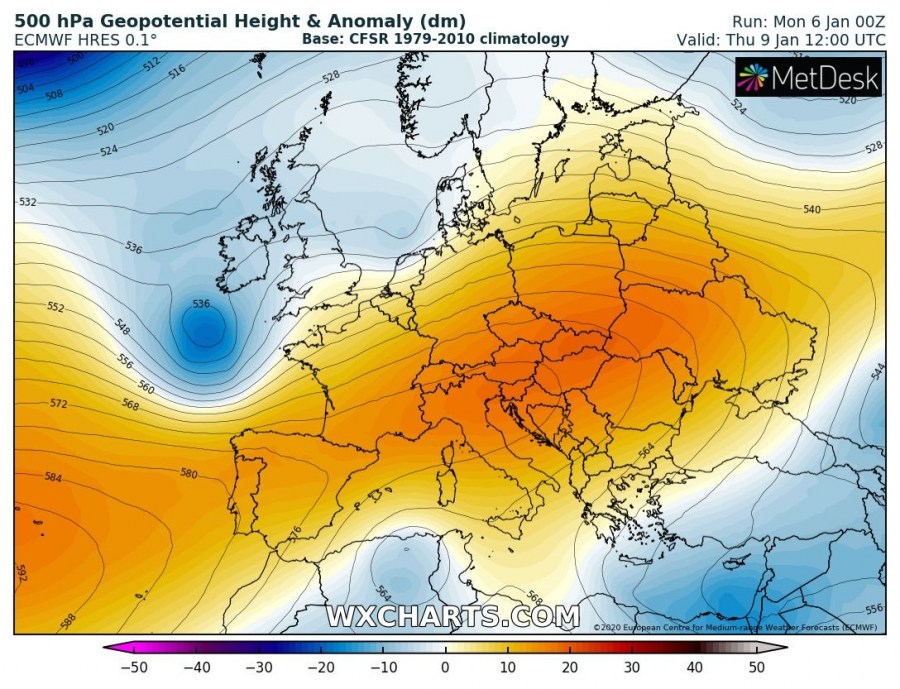 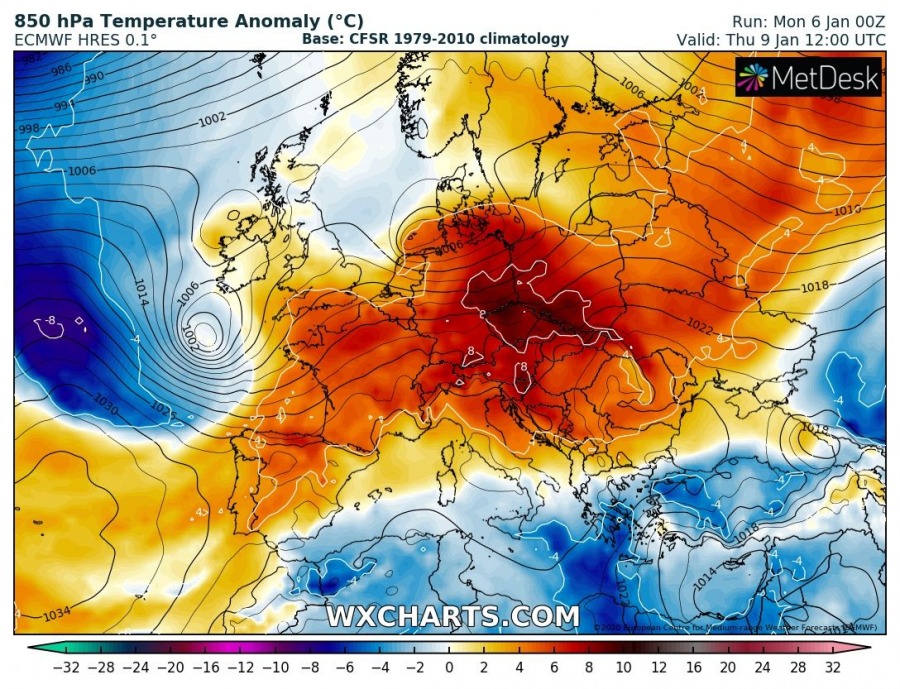 A temporal change in the ridging pattern is seen towards the weekend, as the main ridge drifts into the ESE Europe while a new strengthening upper-level ridge develops from the Azores and spreads into WSW Europe and also towards northern Europe. Between the ridges, a weak upper low (originated from the Thursday’s upper low over the Bay of Biscay) slides south across France into the western Mediterranean. This brings some cooler weather into the region, but nothing significant regarding the winter weather. Very warm day over the Balkans, but remaining cold under the inversions in lowlands. 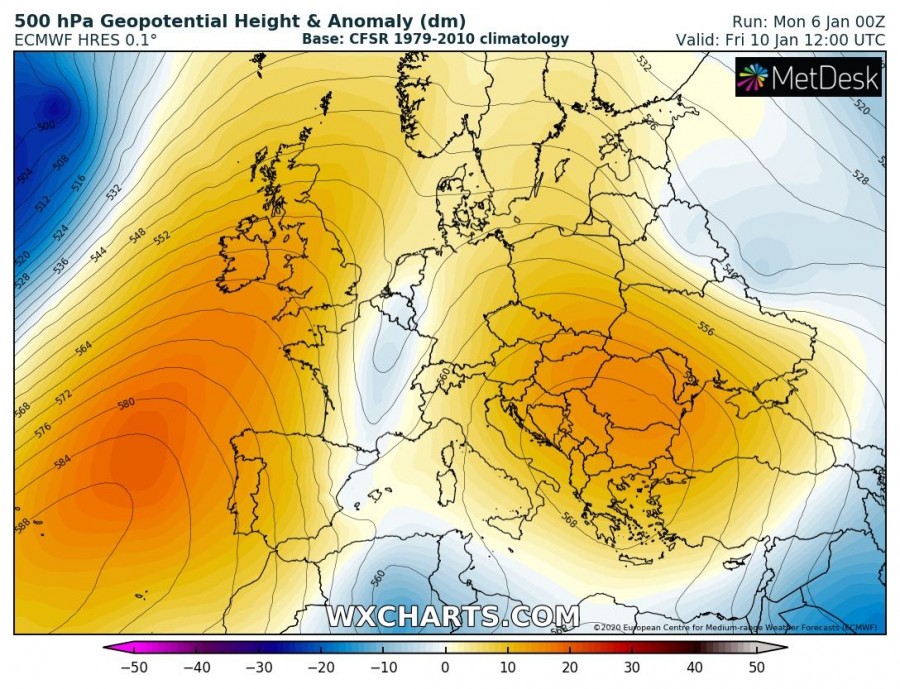 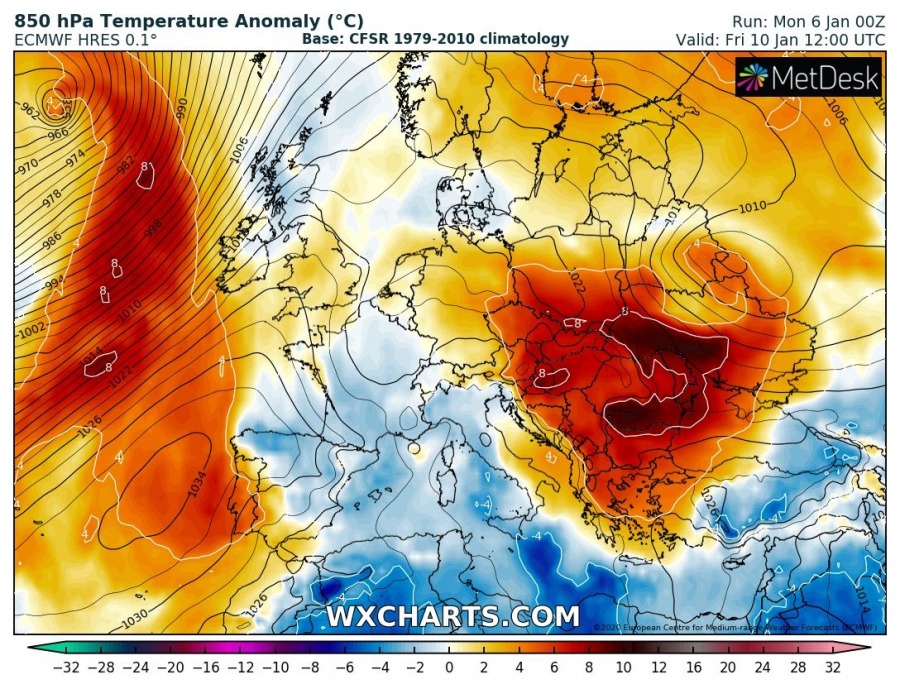 Upper-level ridging now merges again over much of Europe, resulting in stable weather for most of our continent. Upper low over the western Mediterranean deepens while expanding into northern Africa. Persisting deep troughs over the North Atlantic continue pushing intense cyclones towards northern Europe. The ‘west-shift’ pattern intensifies the warm advection into western and central Europe, also partly into Scandinavia, but brings some colder maritime airmass from the Atlantic towards the western Europe at the end of the weekend. 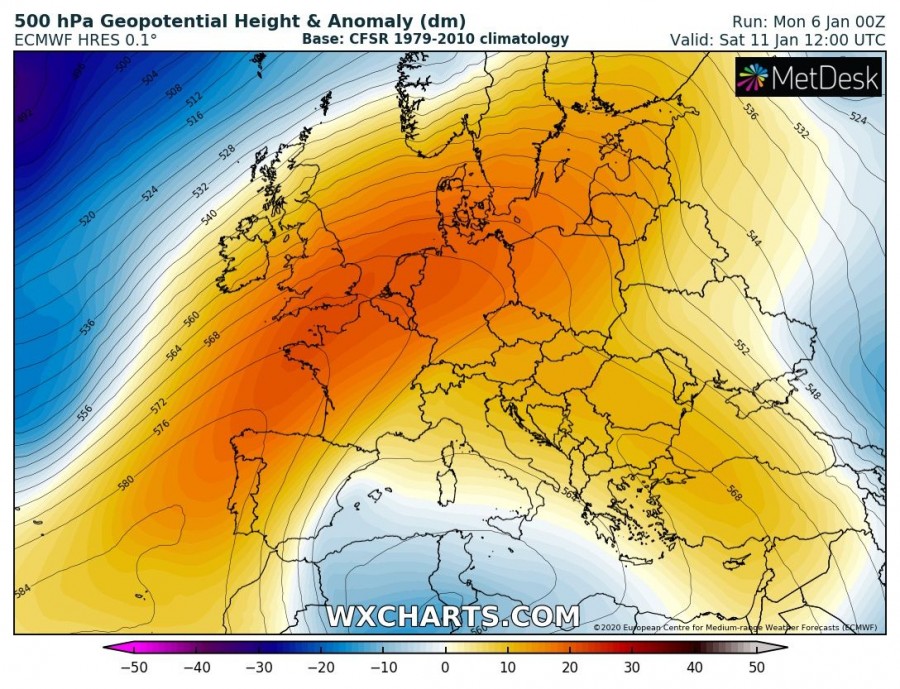 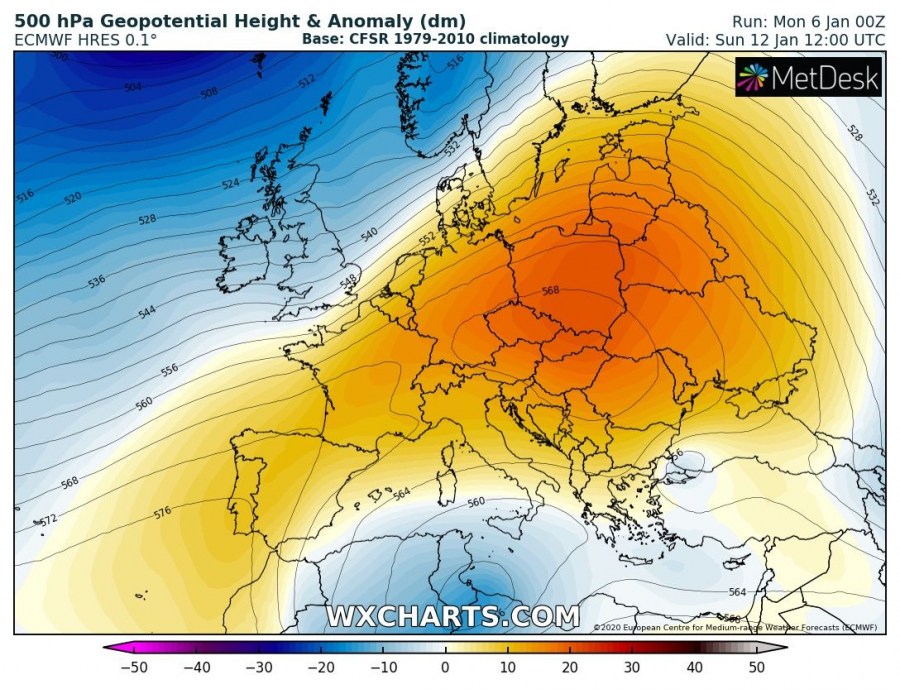 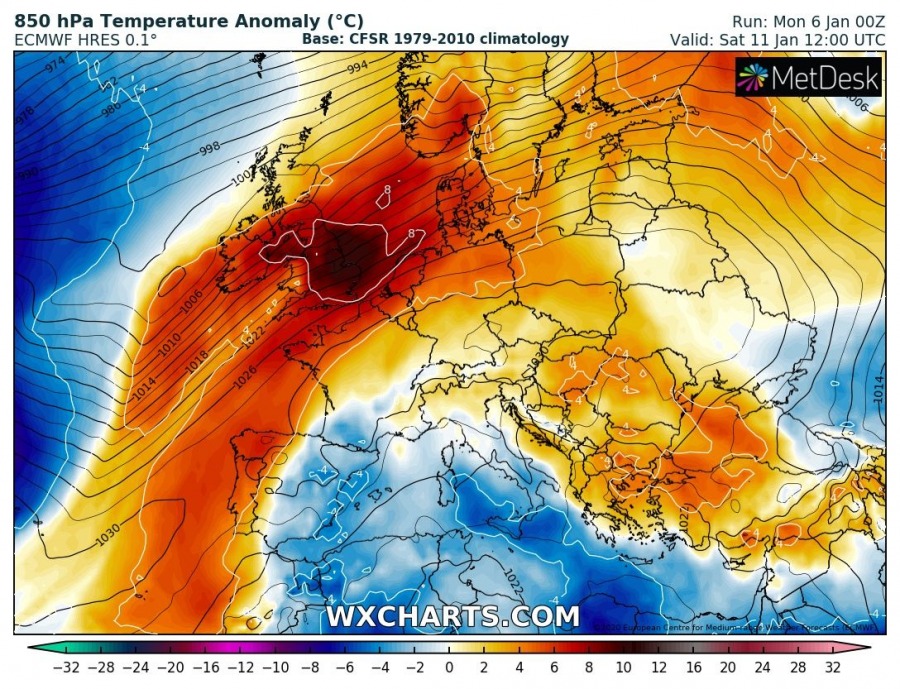 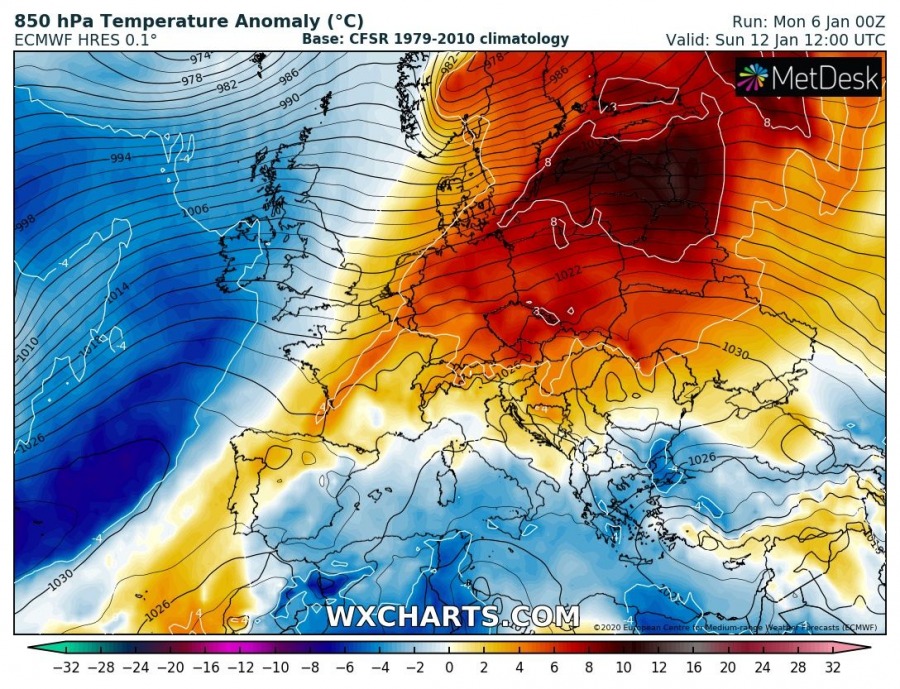 Stay tuned for more details in the mesoscale features of interest throughout this week.

A deep upper low delivers lots of snow across Turkey:

The stratospheric polar vortex rages across the N Hemisphere: