Various models are in fairly good agreement on the development of a powerful windstorm across parts of western Europe this Friday, Oct 12th. The very deep cyclone Callum is expected to travel just west of Ireland and Scotland and result in extremely severe winds, locally in excess of 150 km/h. Major waves are expected along the coasts as well.

Friday’s pattern is confirmed by all models, indicating a powerful upper ridge over north Europe and the Arctic region, while a very deep long-wave trough will be placed over the northern Atlantic ocean. Several vorticity maxima will be embedded in the broad circulation where one intense core develops an explosive cyclone SW of British Isles. Its central pressure will likely deepen for more than 30 mbar in less than 24 hours, which means we are likely looking at a so-called ‘bombogenesis’ – a cyclone that rapidly deepens in very short period of time.

3-hour sequence of the intense cyclogenesis taking place SW of British Isles, starting on early Friday and nearing Ireland and Scotland through Friday daytime, ejecting to the northeast in the evening hours. Heavy rainfall will accompany the main cold front, followed by an intense windstorm from the WSW direction afterwards.

Here are today’s 00 UTC peak wind gust swaths per GFS, ARPEGE and ICON-EU models: while high resolution models are usually the most aggreessive, also the global GFS model is quite impressive regarding peak wind gusts – 140-180 km/h gusts are increasingly likely along the cyclone’s path. 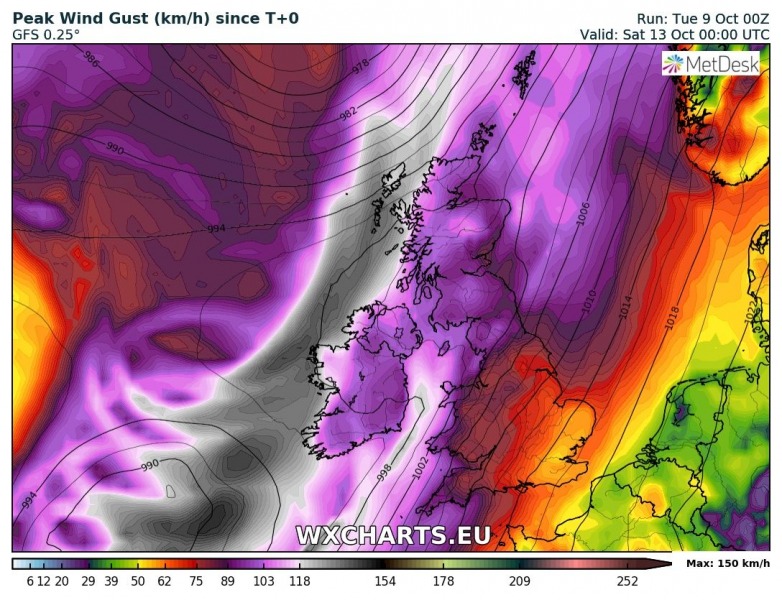 Coastal flooding is also likely to become a major issue, particularly across southern and western coastal areas, with Cork, Kerry and Galway regions in particular. A combination of high waves and high tides could develop major coastal flooding. Waves in excess of 10 m are likely to result from this cyclone!

Additionally resulting from this pattern will be incredible warm advection pushed into the northern Europe and the Arctic region. A very warm airmass with temperatures 12-15 °C warmer than average will be pushed across Scandinavia towards Greenland.

The intense windstorm is likely to develop this Friday and could bring damaging winds and major waves along the coast of western Ireland and Scotland. The deep cyclone will gradually weaken while continuing NE through Friday night.