A period of very unsettled weather is ahead for the British Isles and Ireland in the coming 5-7 days. A broad area of low pressure establishes over the Atlantic, ejecting successive lows into the region. Persistent rainfall will pose a threat for flooding.

A period of unsettled weather ahead in particular for the British Isles and Ireland, as well as parts of N and CNTRL Europe as successive upper (and surface) lows are pushed across the region. Meanwhile a broad upper ridge establishes over E Europe. GFS guidance. Map: @wxchart pic.twitter.com/lH67XyUDww

A broad pattern of low pressure over the Atlantic and W Europe will establish and likely persist into next week. Meanwhile, a broad upper ridge establishes over southern Europe and slowly moves into eastern Europe. In between, successive upper and associated surface lows will be pushed across the British Isles and Ireland into northern and central Europe.

While individual lows will be of varying intensity, current model guidance does not indicate a particularly deep low with potential threats for severe to extremely severe windstorms. Expect periods of windy weather with peak wind gusts likely below 100 km/h.

The main threat from this pattern is the persistent rainfall and potential flooding. 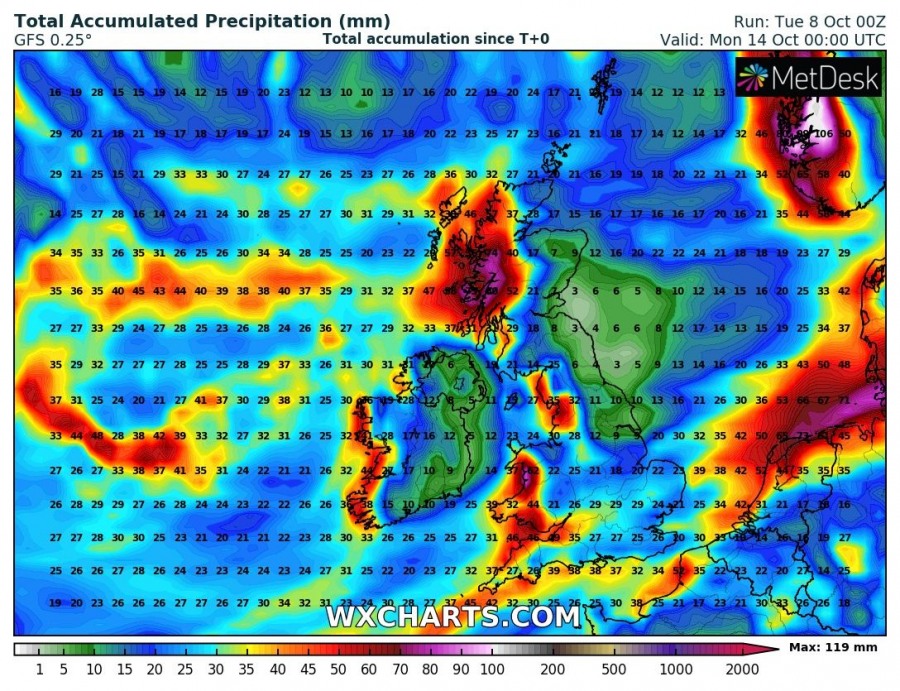 GFS rainfall totals for the British Isles and Ireland until the end of the week (top) and the middle of next week (bottom). Maps: Wxcharts.

Latest GFS model guidance suggests steady increase in rainfall totals across the region, particular the western coastal areas. High resolution ICON-EU and ARPEGE models indicate up to 100-150 mm of rainfall by the end of the week in parts of Wales, north England and west Scotland. Local flooding is likely, particularly as the ground is saturated from preceding rainfall.

Rainfall totals for the British Isles and Ireland until the weekend. ICON-EU and ARPEGE model guidance. Maps: Wxcharts.

Stay tuned for additional updates as the pattern evolves, and if there are indication of any low becoming particularly severe.