Intense rainfall is expected in the coastal areas of southern France and northeastern Spain over the next 24 to 48 hours. Rainfall totals are expected to exceed 100 mm over a wide area, locally climbing above 200-300 mm. Flooding is expected, areas with particularly high rainfall totals may see major, damaging floods.

The current rainfall episode is caused by the cutoff low persisting over the western Mediterranean. Intense convective and orographic rainfall is expected over the next 24 to 48 hours in the coastal areas of NE Spain, the Balearic Islands and northwest Italy. Additionally, eastern parts of Corsica and Sardinia are also expected to receive large amounts of rain. High resolution models indicate up to 300+ mm of rainfall locally over these areas, while cumulatives in 70-150 mm range are expected over larger areas. Below is a selection of various high-resolution models for rainfall over the next two days – agreement is good particularly on locations of most intense rainfall.

The most intense rainfall is expected over NE Spain and extreme SSE France tonight and early in the morning, gradually moving eastward tomorrow and early on Thursday.

Rainfall totals in the NW Mediterranean region over the next 48 hours. AROME model guidance. Maps: Wxcharts.eu. 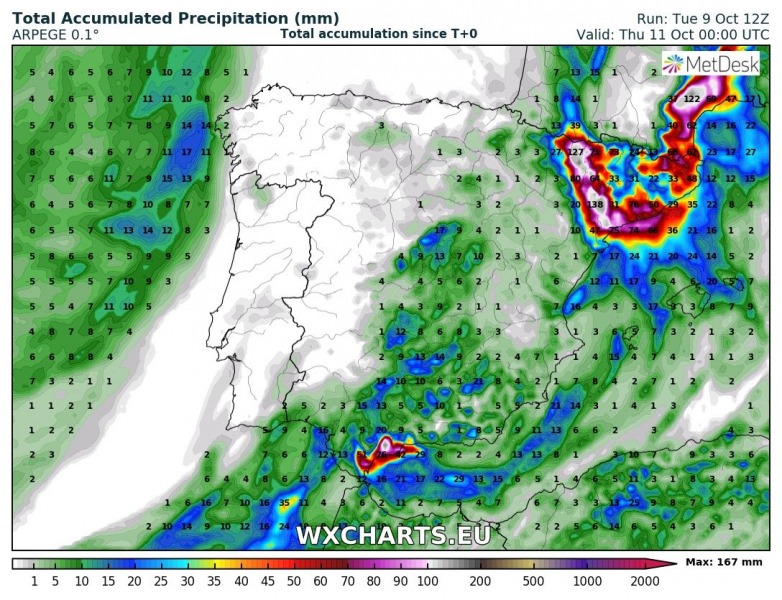 Stay tuned for updates and reports!