Hurricane Michael has gone through rapid intensification overnight and is now a major Category 4 hurricane. Data from the NOAA Hurricane Hunters aircraft indicate the pressure dropped to near 947 mbar, a decrease of 20 mbar between 18 UTC and 02 UTC with most of it occurring during the past few hours. Michael’s eye has become more distinct with a solid ring of cloud top temperatures colder than -75 °C surrounding the warming eye.

This morning’s infrared satellite image of Michael reveals exceptionally impressive deep convection, cloud tops are even below -80 °C which is exceptional for a Gulf of Mexico tropical system! Michael is expanding in size at the same time. 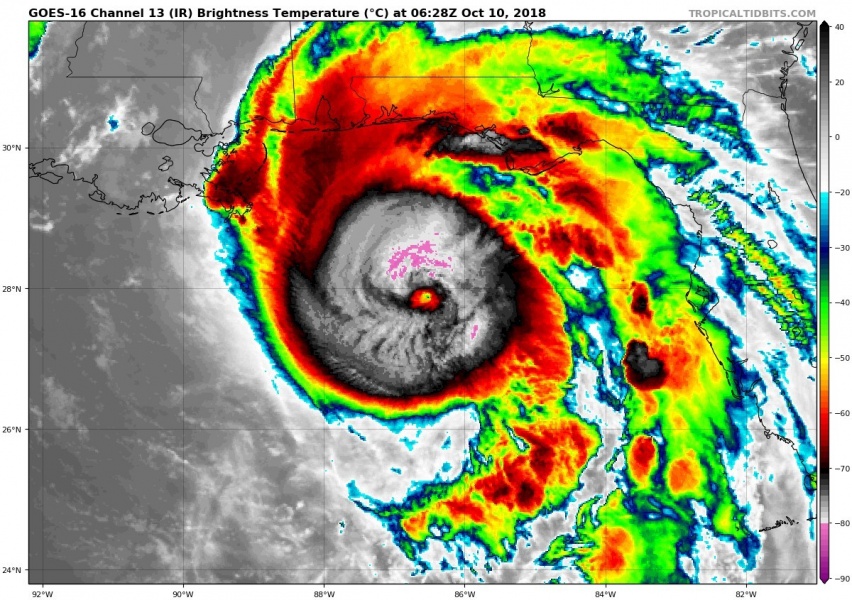 Latest NOAA Hurricane Hunters aircraft observation reveal intense winds within the SE quadrant (eyewall) of the storm, near 945 mbar central pressure and flight level winds of almost 160 mph. The surface winds were close to 130 mph, which confirms Michael being a major Category 4 hurricane! 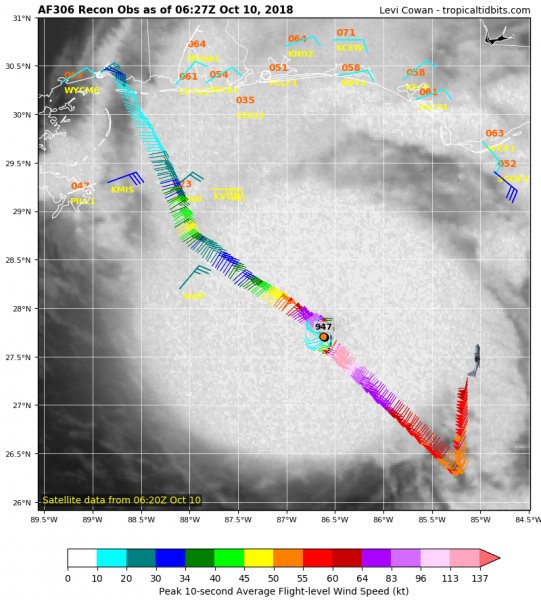 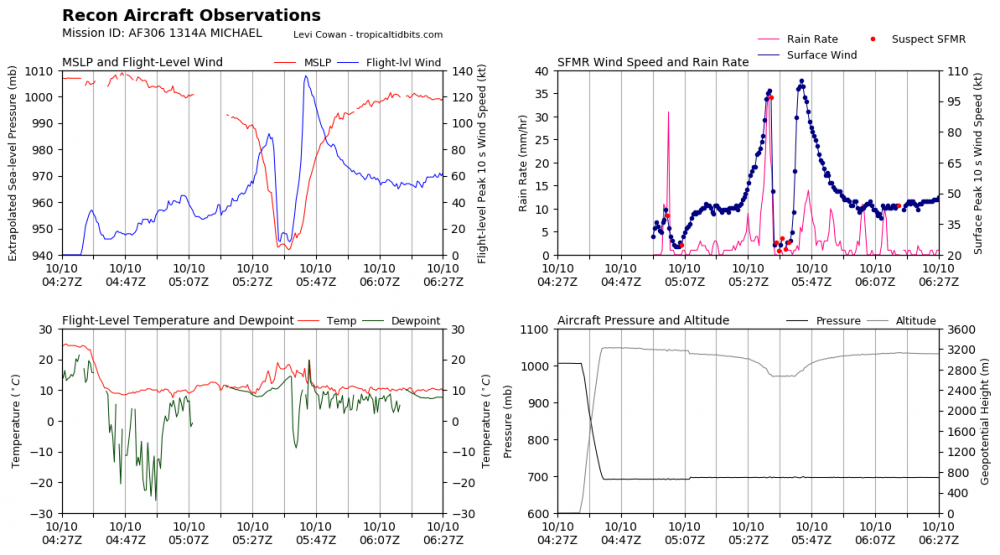 Sea surface temperatures across much of the Gulf are very high, 28-29 °C across the eastern half and up to 31 °C across the western side near Mexico. Northeastern part of the Gulf has some pockets of very warm seas which likely contributed to this significant intensification in the past 12 hours. Some additional strengthening is not ruled out either, since Michael remains over very warm waters up until the coast. 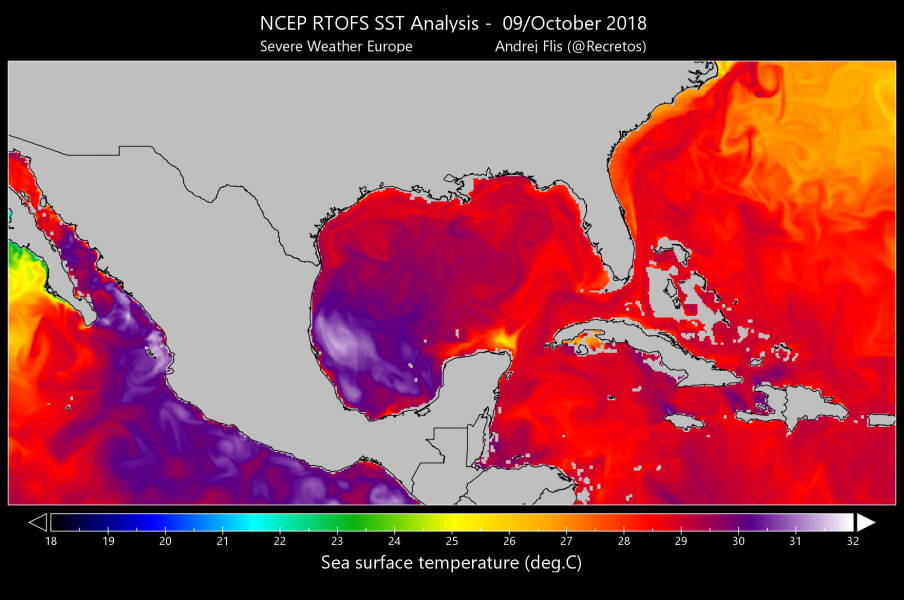 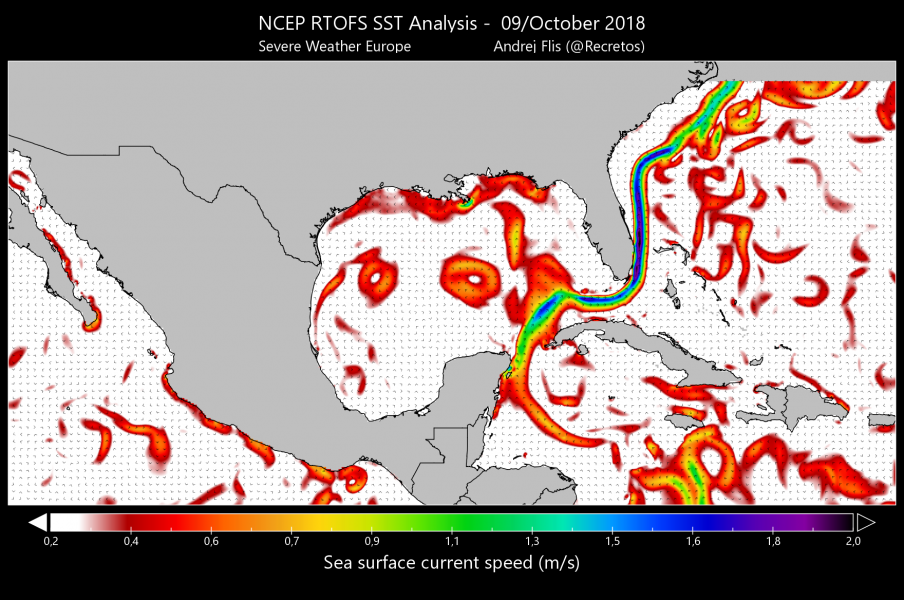 Landfall of hurricane Michael is expected early this afternoon local time (16-18 UTC), near Panama City in the Florida Panhandle. Below is GFS and HWRF model comparison: HWRF is more aggressive with central pressure even below 930 mbar with 140+ mph sustained winds, while GFS has it around 948 mbar and ‘only’ 95 mph. Per HWRF, hurricane Michael would be a strong Category 4 system at landfall. 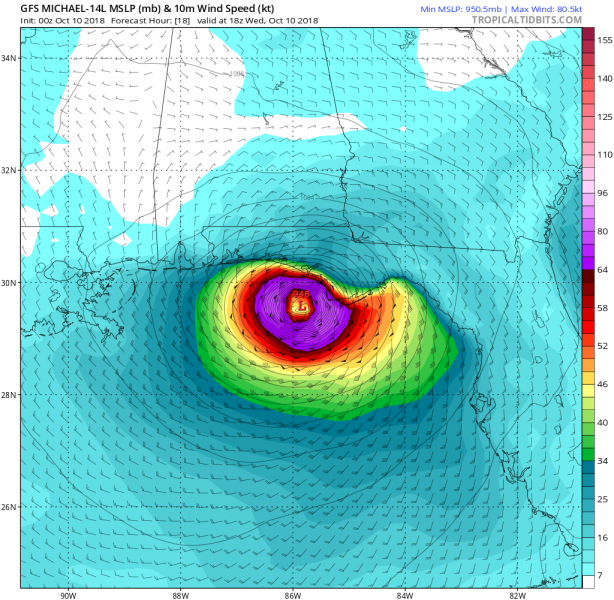 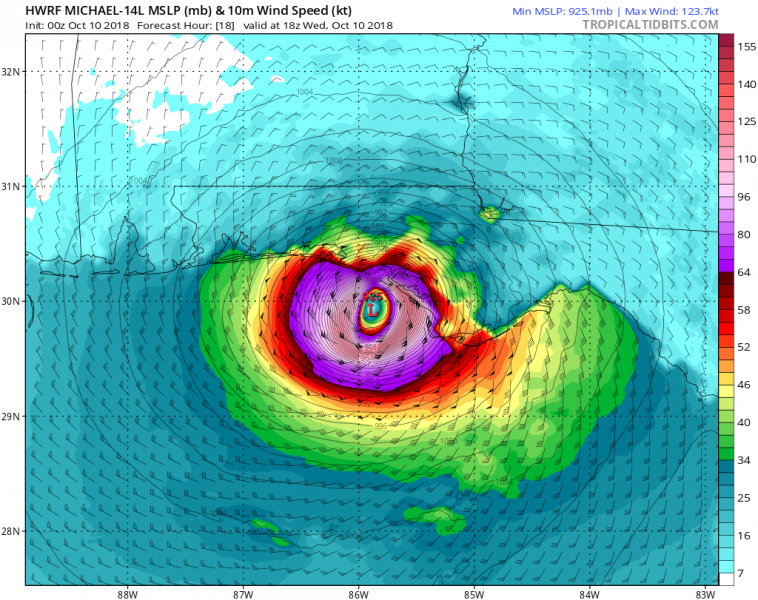 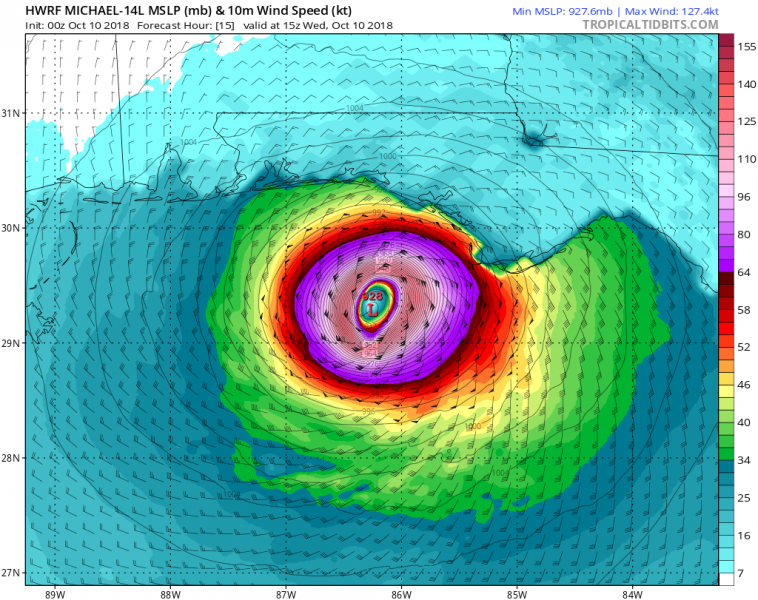 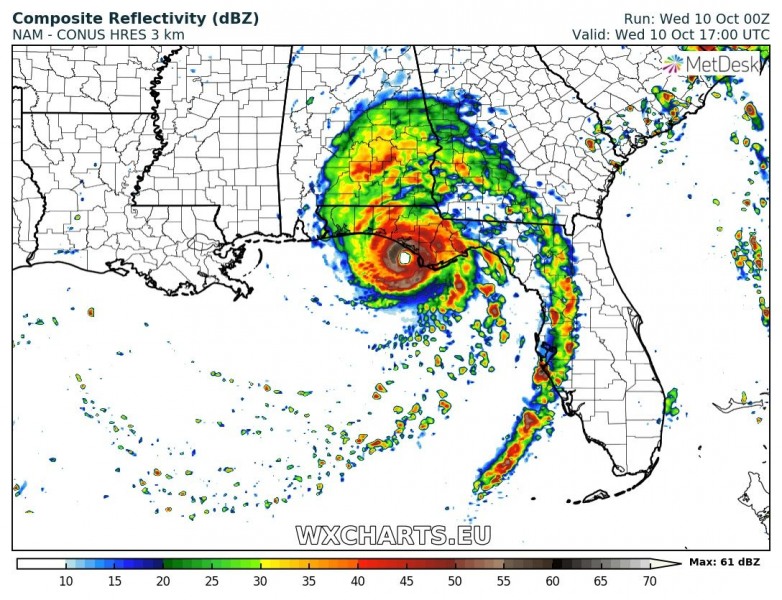 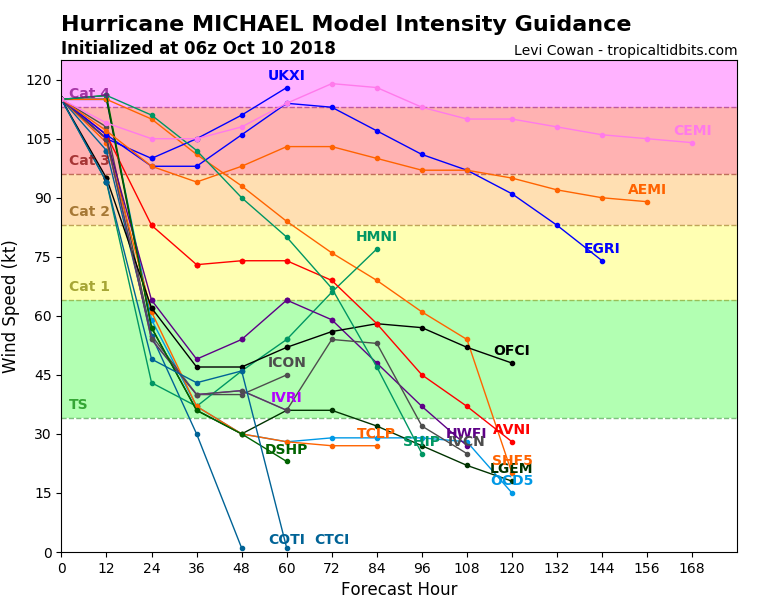 Future forecast track leads Michael across the southeast US (Florida, Georgia, South / North Carolina) before ejecting into the Atlantic. The hurricane is expected to rapidly weaken while inland, traveling NE tomorrow. 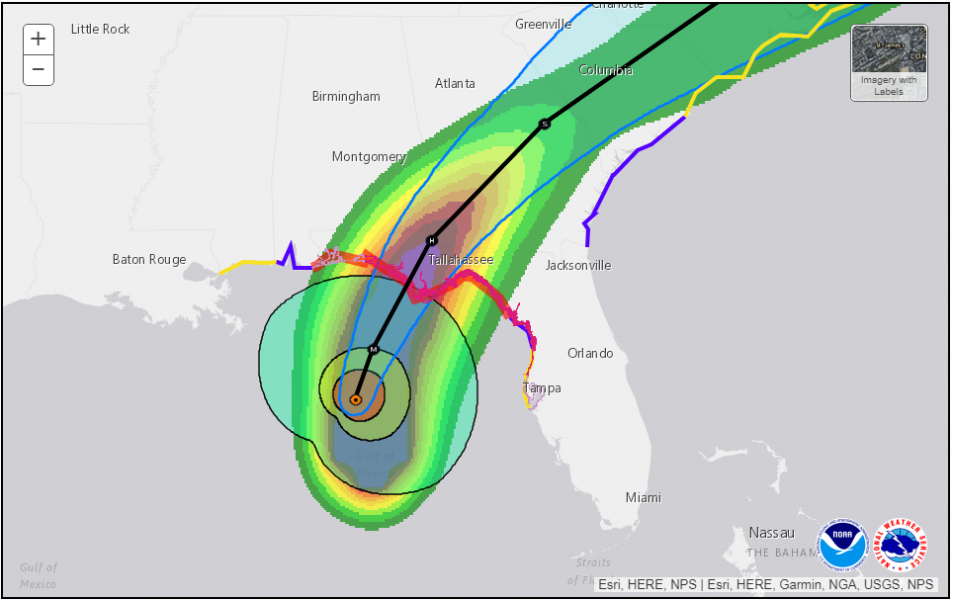 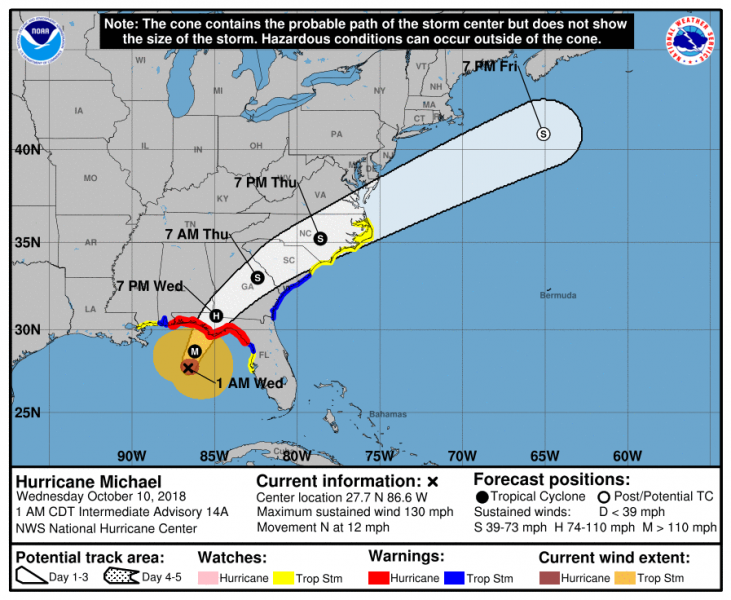 Accumulated rainfall and peak wind gusts swaths per NAM model: peak gusts up to 250 km/h and more than 500 mm of rainfall locally. 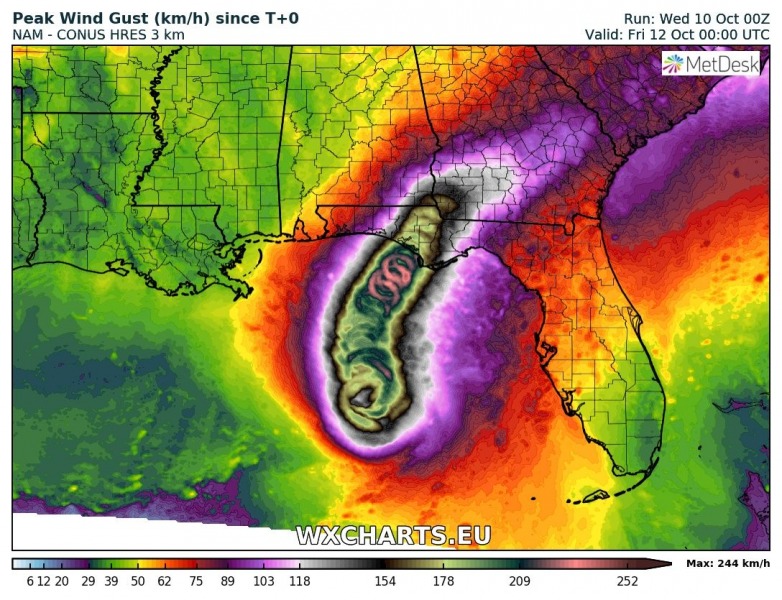 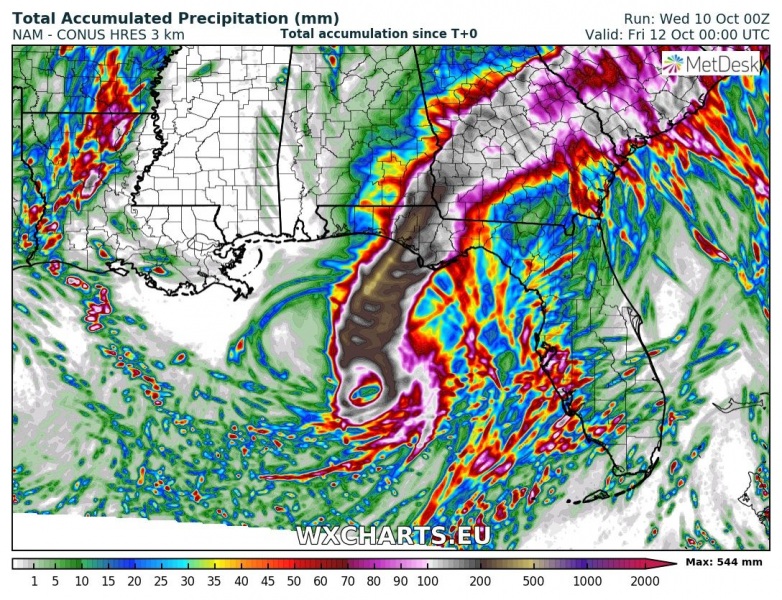 Major hurricane Michael will be a devastating hurricane with life-threatening storm surge, destructive winds and flooding for parts of Florida Panhandle later today and tonight.