Here is the latest update on the upcoming robust weather this weekend. Various models are well on track with the develop ment of a potentially severe weather outbreak tonight through tomorrow (Saturday, Aug 25th) and Sunday (Sunday, Aug 26th) across the N Mediterranean region. Including N Italy, much of Slovenia, NW Croatia and Adriatic sea where all types of severe weather will be possible, including tornadoes and especially dangerous flash floods!

The current pattern reveals a very deep trough approaching central Europe with a significant change in weather expected along and behind the surface cold front in the next two days. Hot and very moist airmass is placed ahead of the front, rising the potential for intense storms development when the front enters the region tonight.

Some prefrontal activity is expected ahead of an approaching front across the N-NE Italy and NW Slovenia tonight, as low-level winds will be increasing, advecting high moisture towards the southern Alpine region. With extreme instability in place, torrential rainfall can be expected locally. However, since the main jet stream will still be far to the west tonight, models suggest that robust organized storms are unlikely due to lack of stronger wind shear, so we can expect scattered multicells and moderately organized storms, maintaining along the slopes of the mountainous terrain of NE Italy and NW Slovenia.

By early morning hours, a strengthening low-level jet across the Adriatic sea towards the N Meditterranean triggers the first slow-moving storms. These are expected to spread NE across the region into NE Italy and W Slovenia during the day. At the same time, the main frontal boundary pushes from the Alps and slows down, in response to a deepening surface low (Genoa low). Precipitation and storms will intensify and widespread storm development is expected. This suggests the amount of rainfall across the broad region will be very high.

Instability will likely be very strong to locally extreme, as some models are hinting at more than 3000 J/kg will be available due to a very warm Adriatic sea (current sea surface temperature is 27-28 °C which is 2-3 °C warmer than normal) and therefore very high dewpoints in the low 20s are forecast.

Here is a comparison of CRO-ARW, ICON-EU and ARPEGE models for Saturday, extreme CAPE can be expected and as such, an explosive development of storm cells is likely! 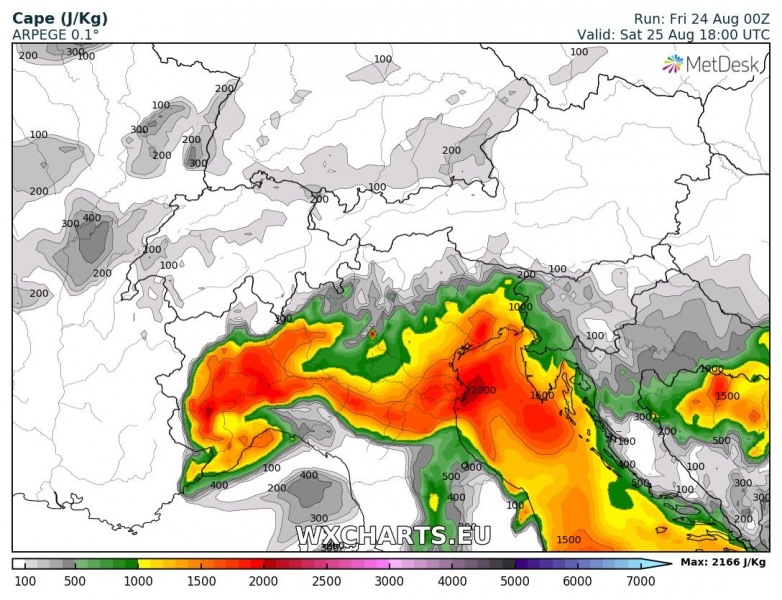 Very strong wind shear will be available through late Saturday and especially overnight to Sunday and Sunday morning when frontal zone pushes into the N Adriatic region and NW Balkan peninsula. This suggests the overlap with strong to extreme instability will be supportive of well organized storms and clusters, including intense multicells and supercell storms. With primary threat for torrential rainfall, severe winds and large hail. Tornado threat will also be enhanced especially along the N Adriatic coastal areas (Istra, Kvarner) where strong southerly winds strongly enhance low-level wind shear and helicity. Both favorable for mesocyclones in the lowest levels. Potential exists these could go inland onto the Kvarner islands or WSW Istra.

Once the surface cold front pushes further SE across the N Mediterranean, pattern suggest a split of the upper trough into a deep upper low moving SE across Italy and Adriatic sea.

Expect widespread torrential and excessive rainfall to continue across parts of northeastern Italy, western and southwestern Slovenia, southern Austria and northwestern Croatia (Istra & Kvarner). Various models are in good agreement on over 200 mm / 36h of rainfall locally, with some models suggesting values over 300 mm cannot be excluded either. This severe weather setup is well supportive of training storms and given the extreme instability, slow moving frontal boundary and strong shear in place, conditions are in place for a widespread threat for flash floods.

Attached are various model output where we can see the amount of rainfall until late Sunday is very impressive. 100-200 mm per 24 hours period is extreme and could produce significant flash floods threat where the most intense storms will develop and maintain for longer period of time. Training cells effect seems likely!

Downslope Bora winds are expected to develop in the wake of the cold front on Sunday. A strong pressure gradient will exist between N Balkan peninsula (a developing high pressure system) and central Italy (a surface cyclone associated with the upper low). Locally, wind gusts up to 120 km/h are possible along the NE Adriatic coast.

Much colder airmass will spread behind the cold front, likely 10-15 °C lower temperatures are expected than today. This will also push snowfall pretty low, so we can expect fresh snow in the Alps down to around 2000m ASL. Cannot exclude even more than 50 cm of fresh snow in some parts of S Austria above 2500 m elevations!

Stay alert for dangerous conditions this weekend and if you’re going to observe these storms – stay safe!