An active day in the Pacific ocean this week with three tropical systems ongoing there: Typhoon Jebi and Hurricanes Miriam and Norman. While all three are strong, intense systems, none currently pose a potential threat for land.

Hurricane Norman – Category 4 hurricane strength with central pressure 942 mbar, sustained winds of 144 mph, gusts up to 173 mph. It is located in eastern Pacific, SW of California.

Here is the latest statement from the National Hurricane Center (NHC):

Satellite data show that Norman continues to rapidly strengthen. Objective Dvorak data T-numbers from UW/CIMSS have increased to T6.5 or higher and the latest TAFB subjective data T-number is T6.5. These estimates support an initial intensity of 125 kt, making Norman a category 4 hurricane on the Saffir-Simpson Hurricane Wind Scale. As a result of the increased initial intensity, the NHC intensity forecast has been adjusted upward through 36 h, but it is otherwise unchanged.

Here is the latest statement from the National Hurricane Center (NHC):

The satellite presentation of Miriam has improved slightly since the previous advisory, with deep convection remaining over the difficult to locate low level circulation center. The latest
subjective Dvorak intensity estimates from PHFO, SAB and JTWC ranged from 4.0 (65 knots) to 4.5 (77 knots) while the Advanced Dvorak Technique from UW-CIMSS came in at 3.5 (55 knots). Since the satellite presentation has improved slightly since the previous advisory, the initial intensity will be increased to 70 knots with this advisory, which correlates well with a blend of the intensity estimates. The initial motion is set at 300/07 knots.

Miriam is being steered by a large subtropical ridge to the northeast of the system and a deep mid-upper level trough to the north-northwest. Miriam is expected to track off to the northwest
tonight then make a turn toward the north Thursday through Friday night. The increasing west-southwesterly shear should result in a decoupling of the system by early Saturday, and this is expected to result in a turn toward the northwest and eventually west Saturday through Monday as Miriam becomes influenced primarily by the low level trade wind flow. The official forecast for this advisory is nearly identical to the previous advisory and closely follows the consensus guidance.

The environment will be conducive for additional intensification of Miriam over the next 24 hours, with shear values remaining low, sea surface temperatures holding around 28C, while the system moves over a region of higher Ocean Heat Content. As a result the official forecast calls for slight intensification over the next 24 hours, followed by slow and steady weakening between 24 and 36 hours as Miriam begins to feel the effects of strengthening west- southwesterly shear. Beyond 36 hours the intensity forecast will show fairly rapid weakening as shear values increase into the 30 to 45 knot range, while the system moves over marginal sea surface temperatures of 26C or below.

Typhoon Jebi – Category 3 strength with sustained winds of 115 mph, gusts up to 144 mph. It is located in western Pacific, far south of Japan. Its track could possibly lead Jebi to make landfall in Japan early next week. 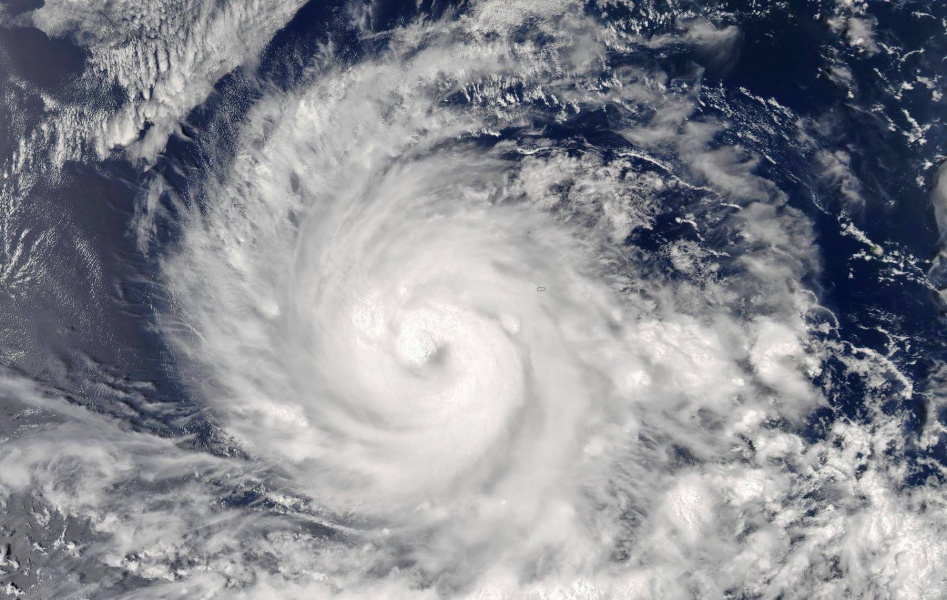