While the North Atlantic and west-central Europe are still dominated by an extensive upper-level ridge and surface high-pressure system, there are five (5) waves – frontal systems – simultaneously ongoing to the south of the ridge. From the US East Coast across Azores, Iberia, southern Balkans into the Middle East. While the most robust systems are #1 and #2, the other three systems are weakening.

Here is satellite imagery of all five systems this afternoon – a pretty spectacular presentation! 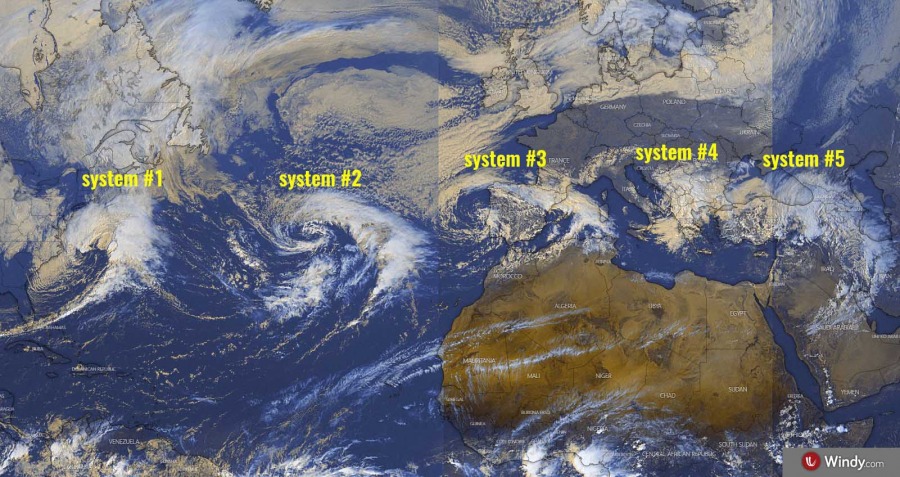 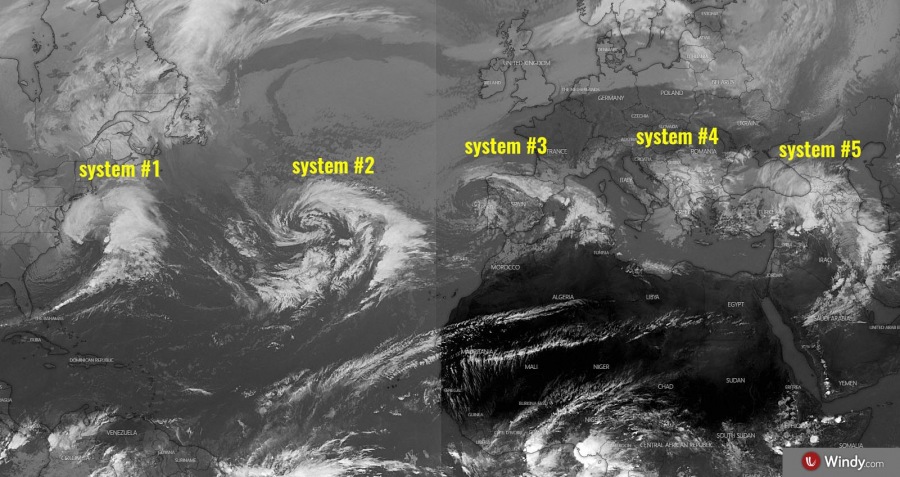 NOAA OPC analysis at 18 UTC on Apr 1st reveals the first three systems in the North Atlantic, with System #1 being the most intense. It has deepened for more than 22 mbar in the past 24 hours. 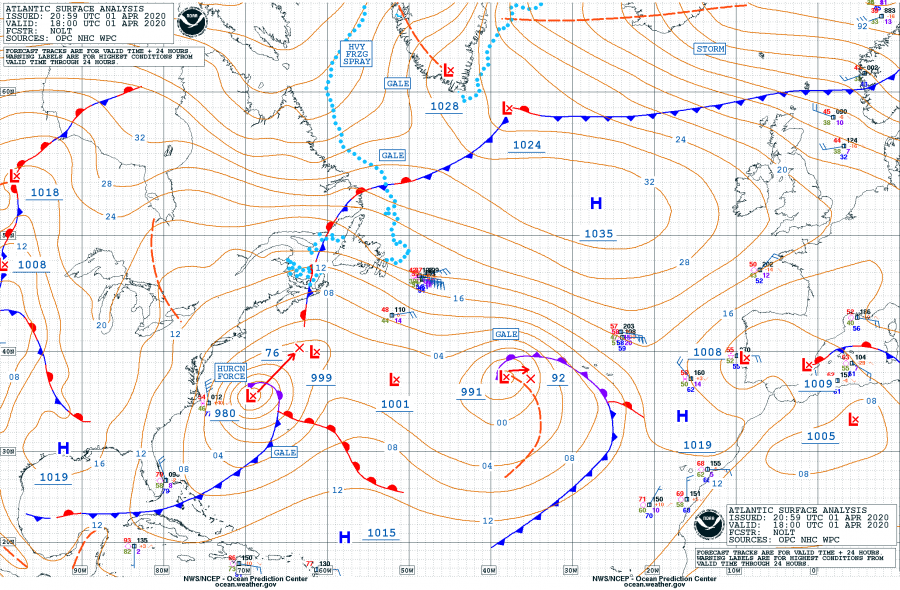 As we can analyze the pattern on the 500 mbar charts, we can see the waves very well. The systems #1, #2, #3 and #5 are isolated lows, while the wave #4 is a short-wave trough moving across the southern Balkans. We can also nicely see the extensive upper ridge further north. 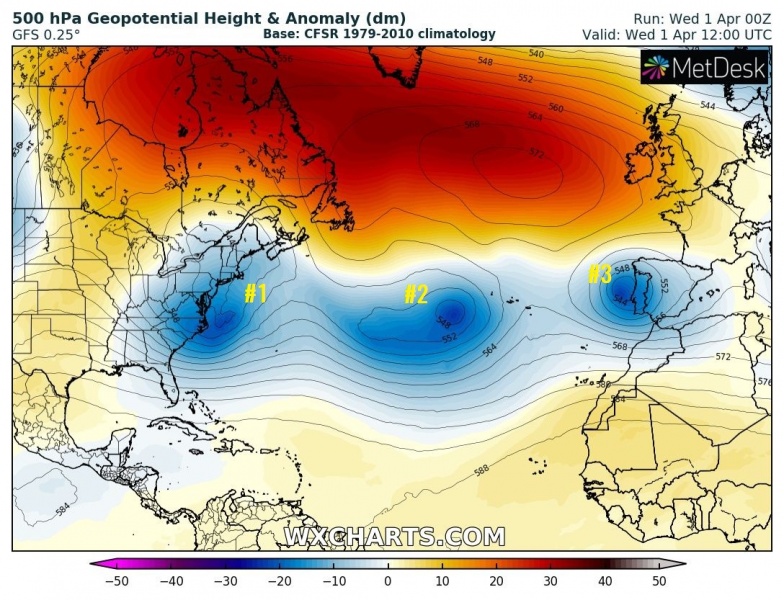 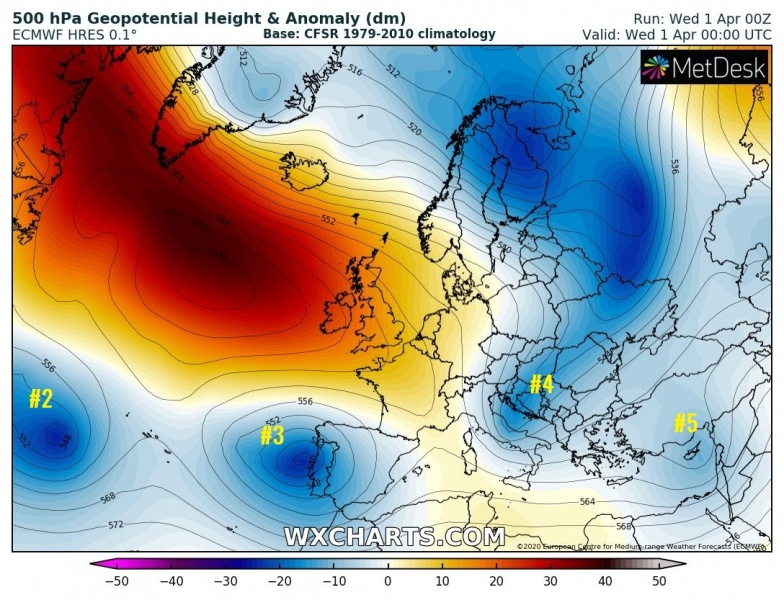 System #1 – a rapidly deepening extra-tropical cyclone along the US East Coast. It is a very powerful system and strongly organized. A well-defined dry conveyor belt wrapping into the core is visible from the satellite, with an explosive development of the system. Its central pressure is around 980 mbar and deepening. It is also interesting to see the future path of this system throughout this week, it occludes along the northeast US and then re-organizes again and accelerates towards North Atlantic over the weekend. We can also see the 2nd cyclone near the Azores, also moving north in the coming days. 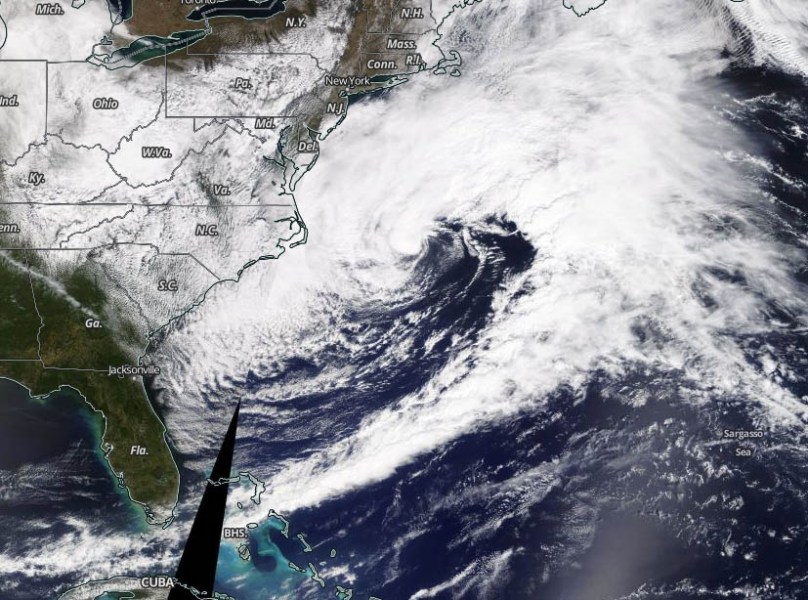 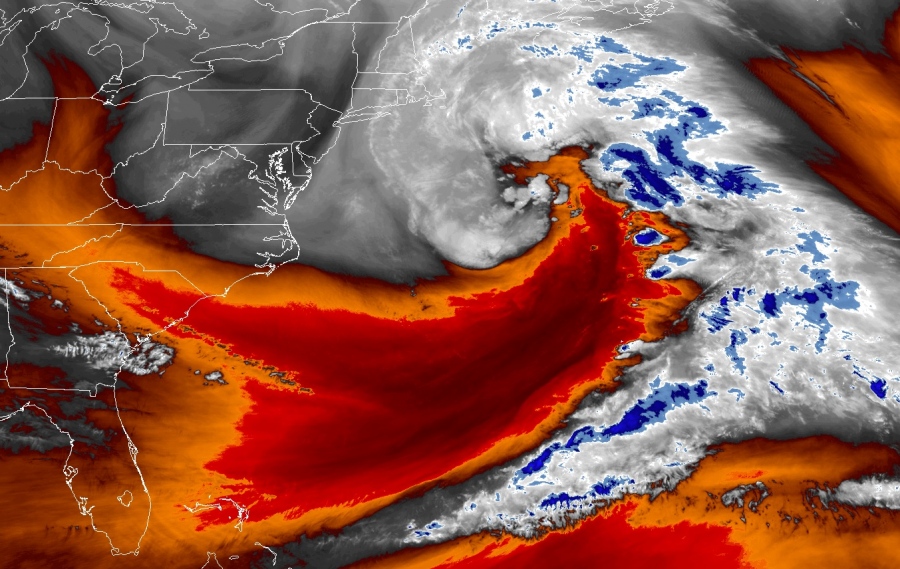 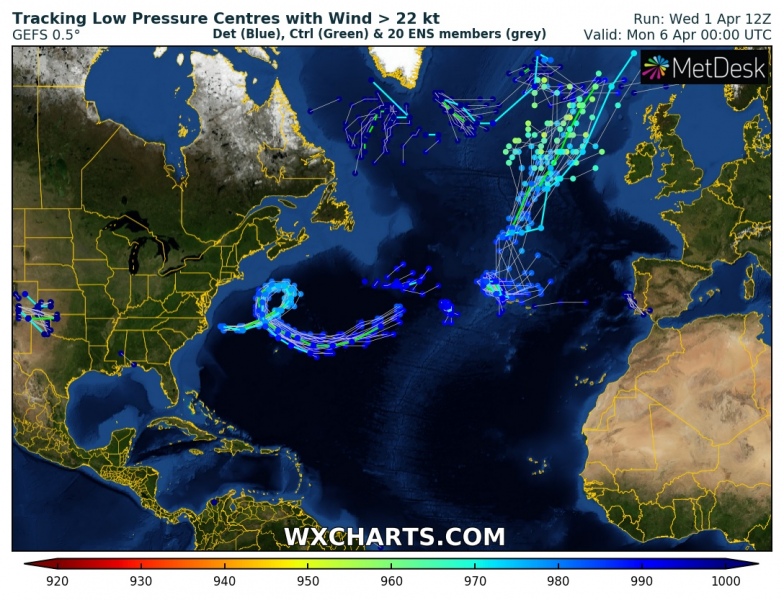 System #2 – located near the Azores in the center of the North Atlantic. Its satellite presentation is quite impressive with the textbook cyclonic structure. The system had a central pressure of around 991 mbar this evening. It is only slowly moving east towards the Azores, but it expected to turn northeast this weekend and begin accelerating. 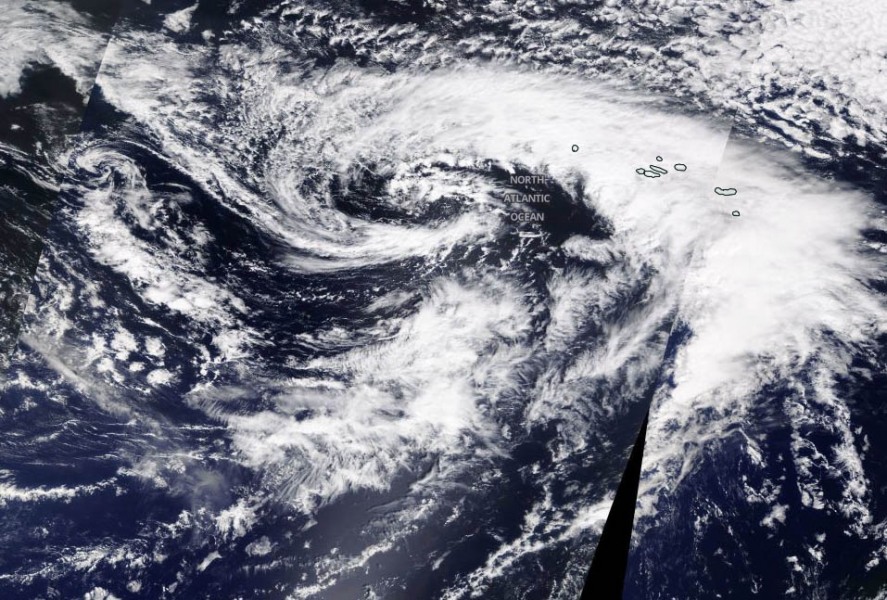 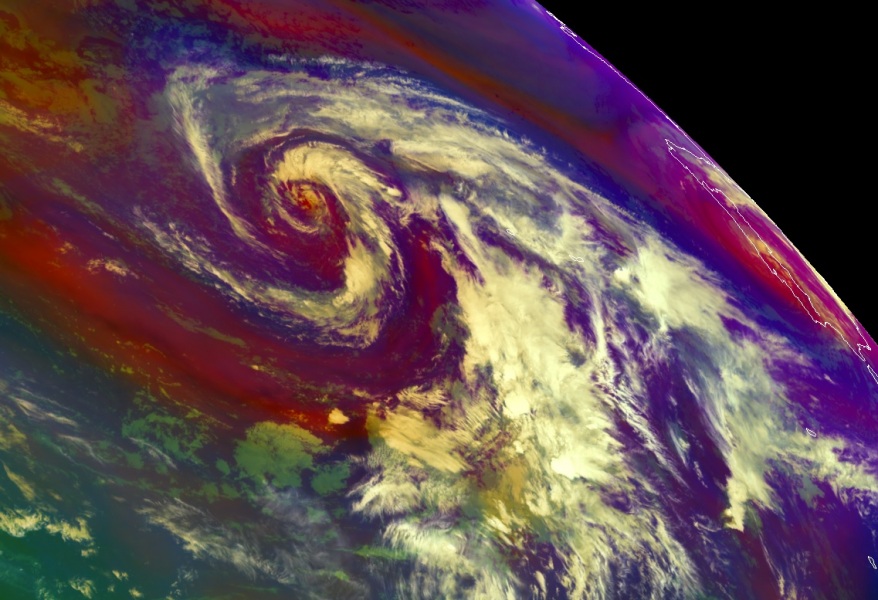 And then there's the swirl farther east in the Atlantic 👁️ pic.twitter.com/naE32eHxUF

System #3 – an upper low centered over the western Iberia. Its central pressure was 1008 mbar this evening. It will bring some additional storms and rain over the peninsula until Friday, then slowly continue east-southeast into the western Mediterranean. 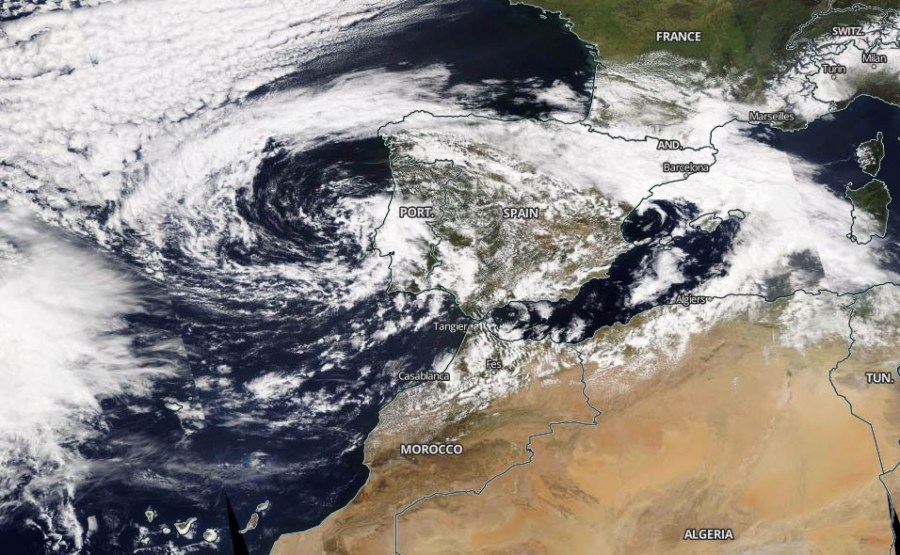 System #4 – is the short-wave trough moving across the southern Balkans, resulting in excessive snowfall over the region. A rather rare heavy snowfall event developed across North Macedonia and northern Greece. It is moving east, its central pressure was around 1008 mbar during its peak time in the afternoon. It will bring some more snow and rain until Friday. 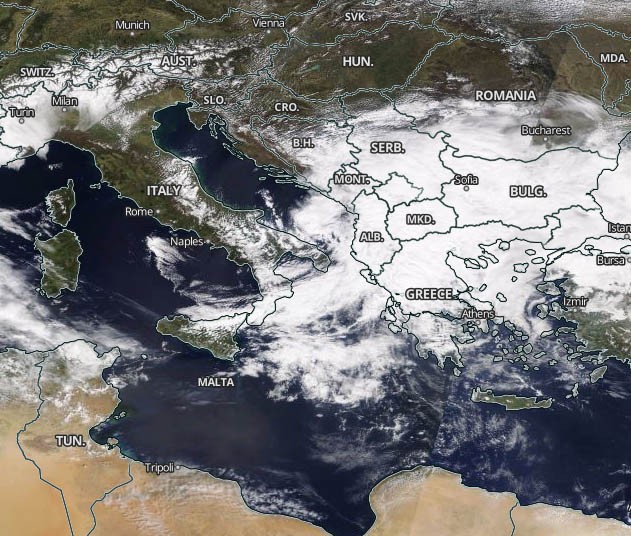 System #5 – is the upper low moving across the Middle East. Its central pressure was around 1005 mbar while moving across eastern Turkey towards the east. The system is decaying tonight. 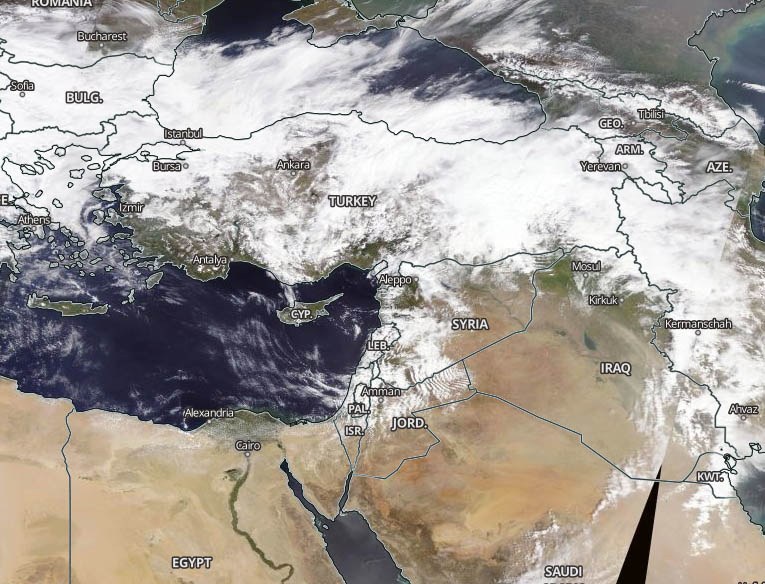 Here are the rain accumulation maps around all five systems. We can see the most robust systems are over the Atlantic, providing quite a good amount of rain in the region. System #2 should bring 40-60 mm of rain across the Azores. The systems #3-#5 are weak and should not introduce any significant precipitation threat. 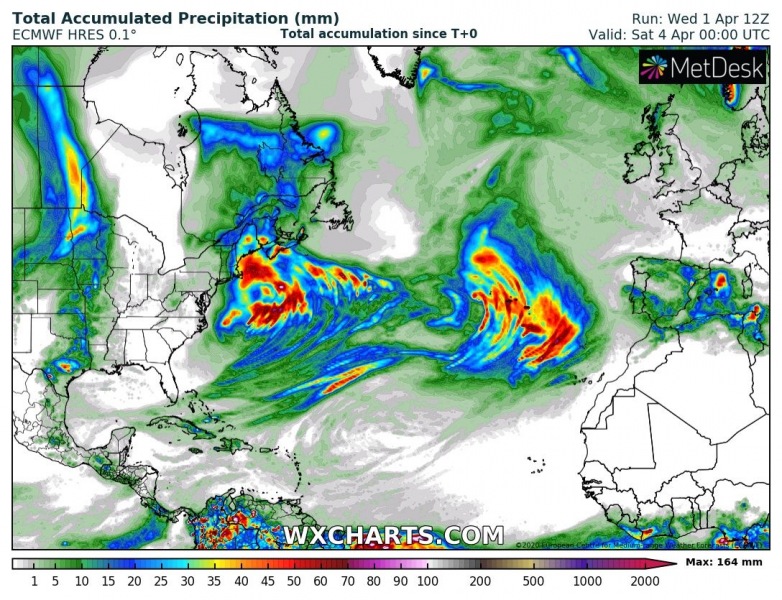 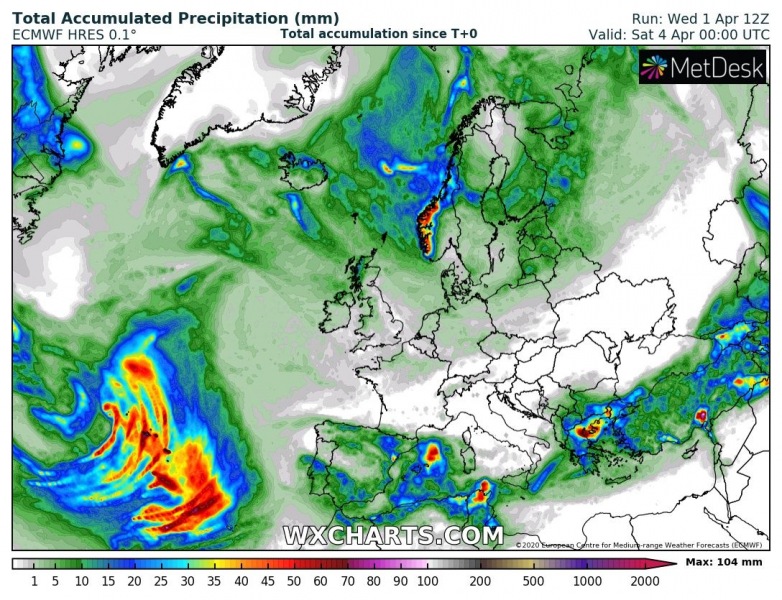 Meanwhile, take a look over the developing winter storm into Norway and the ongoing cold outbreak across central Europe and the Balkans. In the wake on the wave #4: