Autumn months are usually pretty active with deep troughs and cyclones across the North Atlantic. Currently, there are two tropical systems in the Atlantic (hurricane Dorian and tropical storm Gabrielle) and both are expected to move into the mid-latitudes in the coming days. As it often happens, these ex-tropical systems transform into an extra-tropical (or post-tropical) storms, acting as intense cyclones. Potential is increasing at least one of them (ex-tropical storm Gabrielle) will be pushed into western Europe and develop a dangerous windstorm by mid-next week!

Let’s take a broad look over the Atlantic ocean mid-next week – two deep cyclone / low-pressure systems will are visible, these are ex-hurricane Dorian and ex-tropical storm Gabrielle. Dorian tracks along east US coast and then moves across the North Atlantic as a weakening extra-tropical cyclone while Gabrielle re-intensifies with time and develops a dangerous deep cyclone, moving directly towards the WNW Europe. The potential is increasing this cyclone will develop a powerful windstorm towards northern UK and Faroes islands through mid-next week. 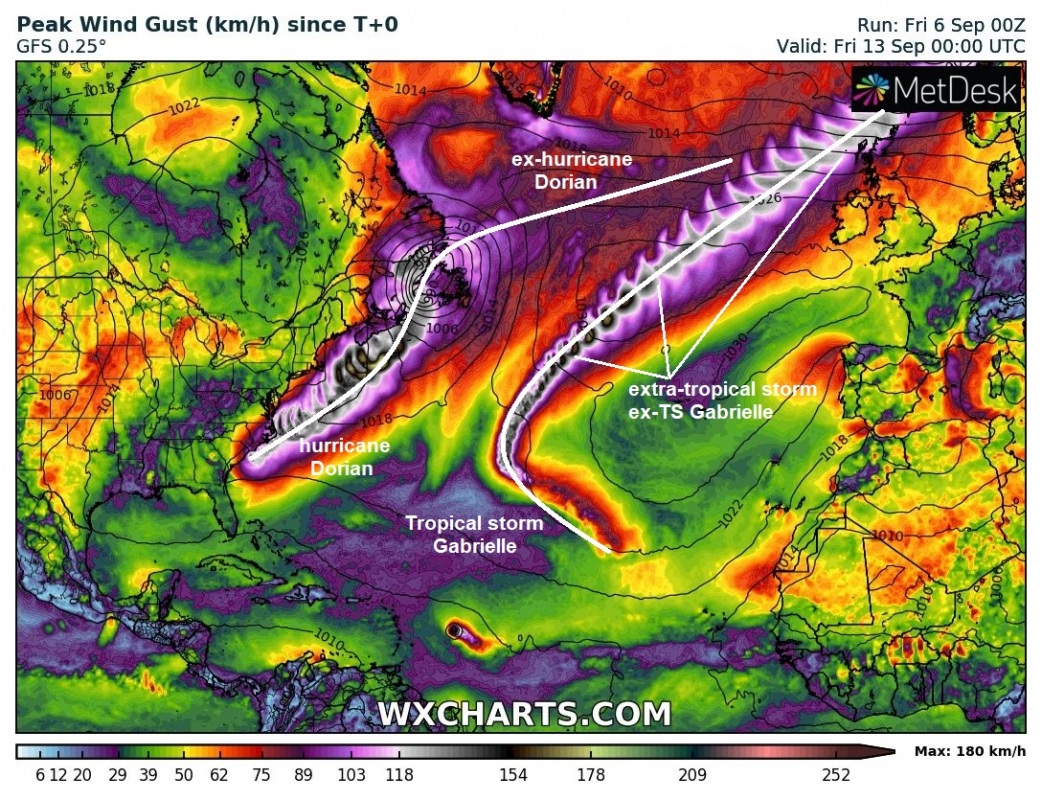 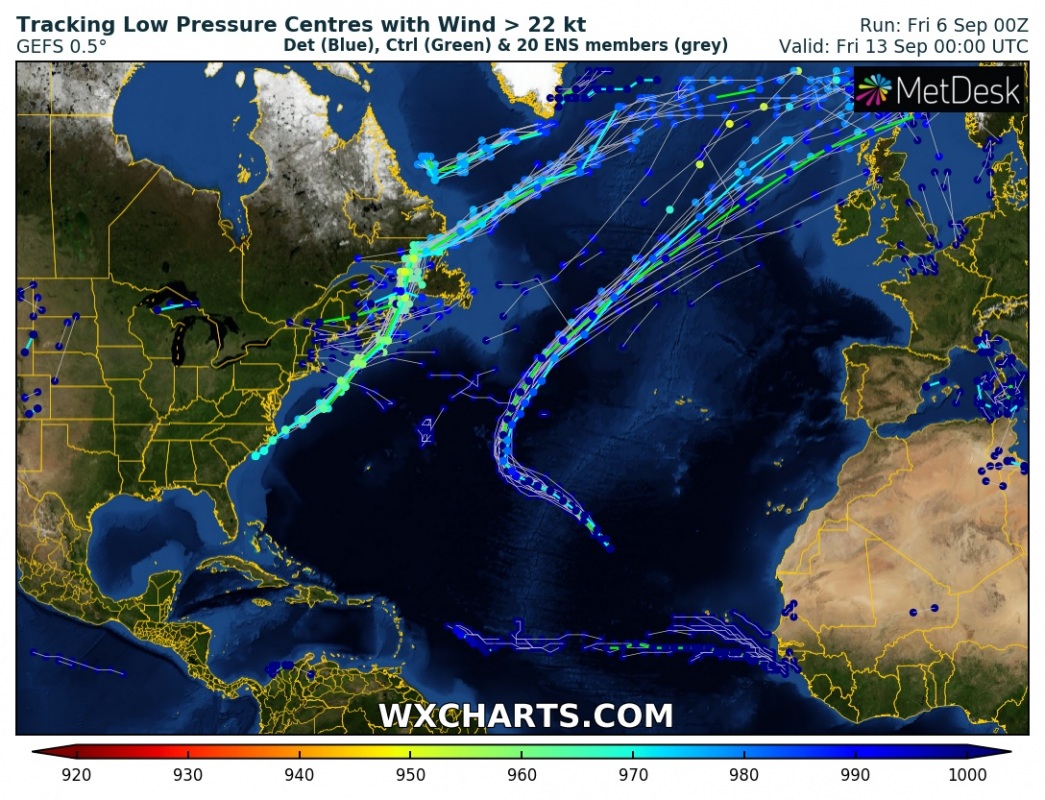 Remnants of the tropical storm Gabrielle are currently packing sustained winds of only 35 knots with a central pressure around 1004 mbar. Additionally, Gabrielle will be moving across significantly warmer oceanic sea surface temperatures in the coming days and result in re-development of organized deep convection and intensification. Some models are even hinting rapid intensification into a CAT 1 hurricane by Monday before Gabrielle would transition into an extra-tropical cyclone towards the mid-next week. 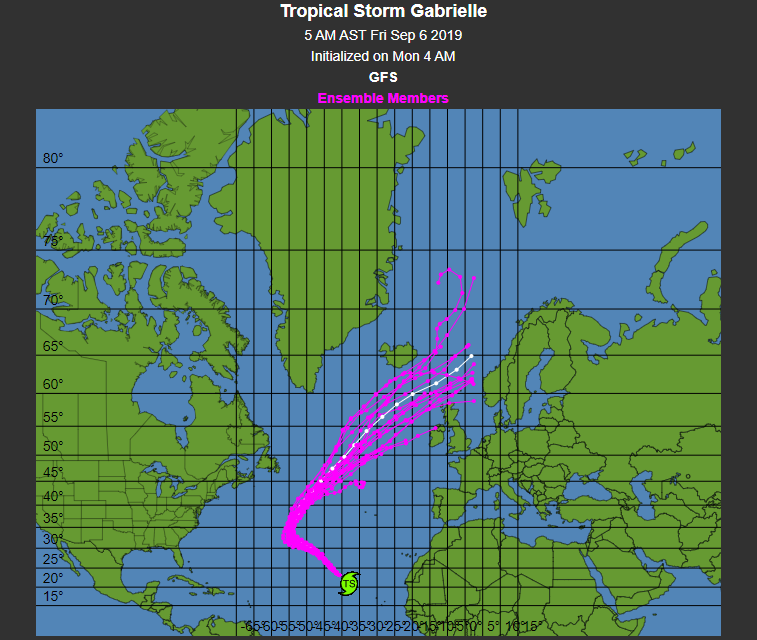 The future track of Gabrielle will first bring it towards northwest through the coming days before it sharply turns northeast and accelerates towards Europe. Various model guidance suggests ex-Gabrielle will be tracking into WNW Europe, increasingly likely towards north UK and Faroe islands. The most likely timeframe these areas would be affected by a severe windstorm seems Thursday, Sept 12th. Still, plenty of room for the potential track shift as we’re 6 days ahead, although based on the attached ensemble forecast map its track is in rather good agreement. 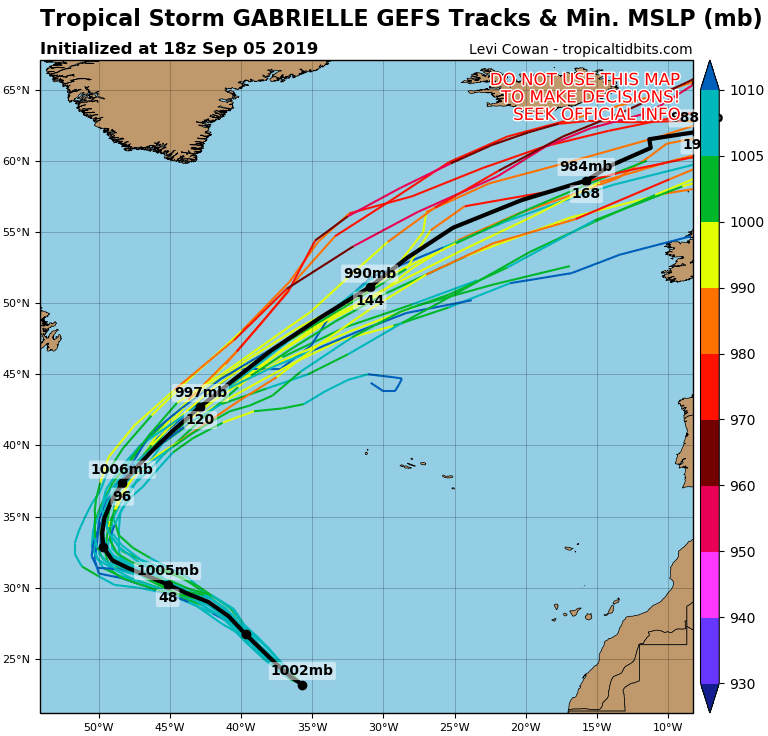 A potentially severe windstorm could develop and bring extremely severe winds in excess of 120-130 km/h in some areas. Indeed, too far in advance for more precise forecasts, but trends are monitored. GFS model map for peak wind gusts along cyclone’s track is attached below. 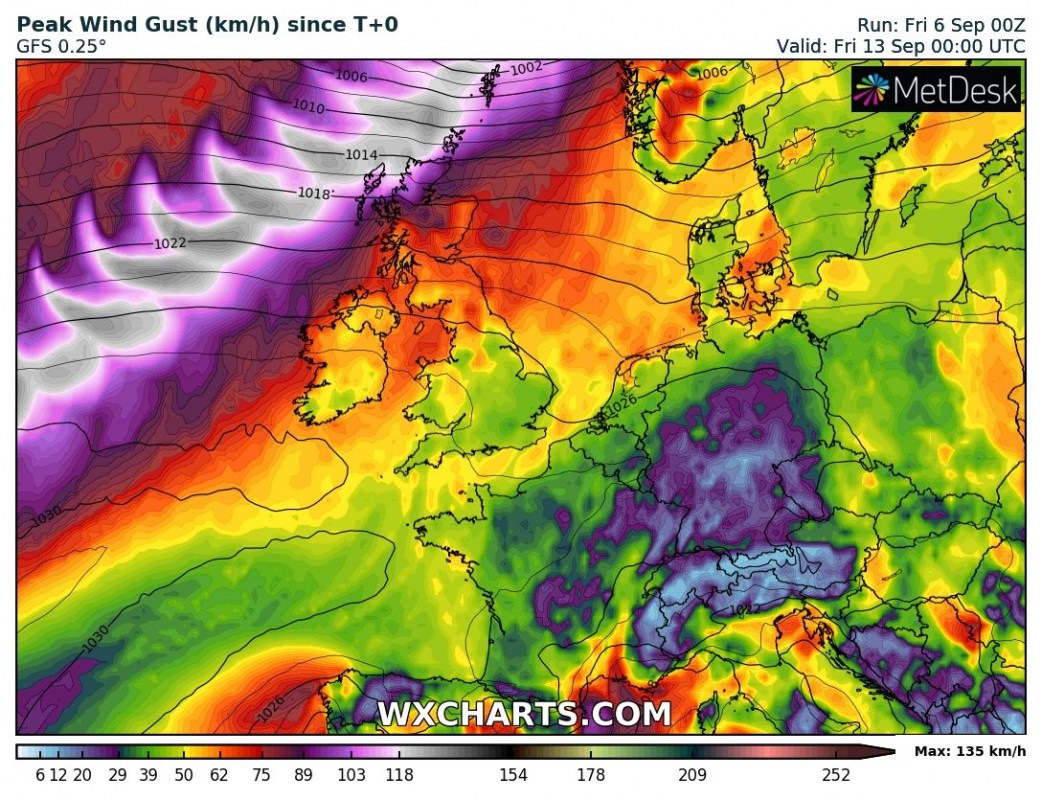 Satellite image of hurricane Dorian this morning, when it was just prior to landfall in outer banks of North Carolina. Still quite an impressive compact structure of this intense system. 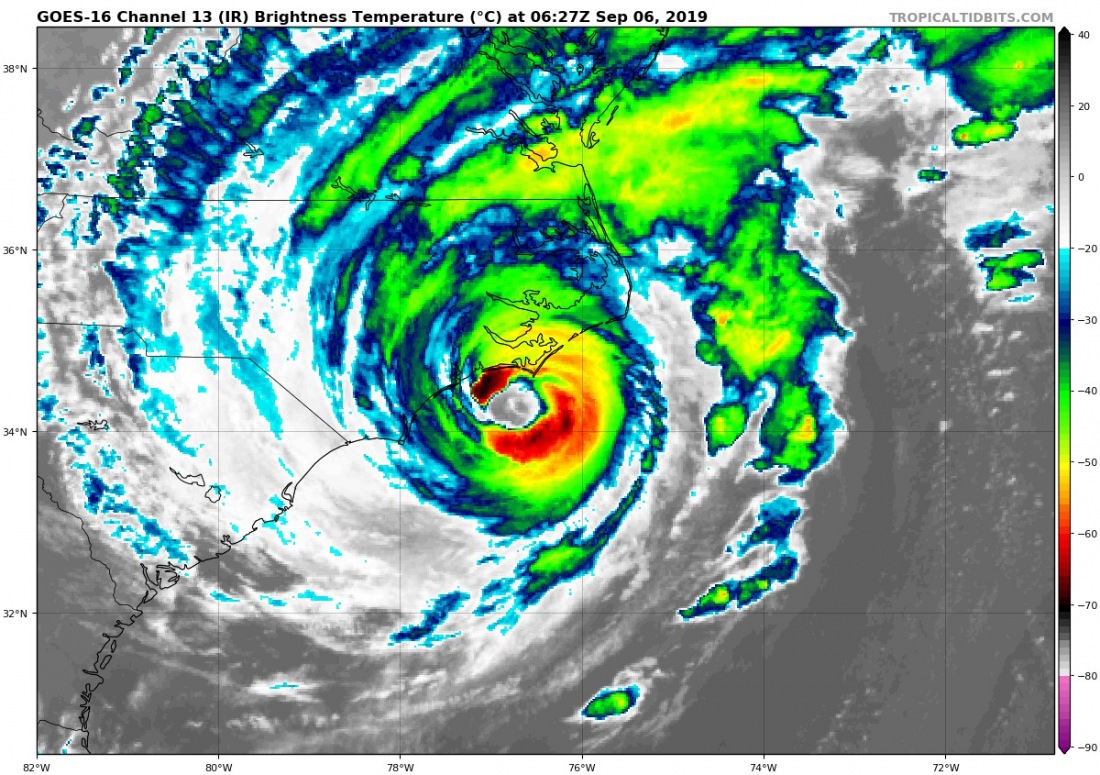 Dorian will continue tracking northeast today and tomorrow, accelerating while gradually transforming into an extra-tropical storm. It will remain a very intense system with deep central pressure when it reaches Nova Scotia on Sunday. Ex-hurricane Dorian will then rapidly continue ENE south of Greenland and will be ingested into a broad cyclone across the N Atlantic and move between Iceland and UK by mid-week, although with a gradually weakening trend. 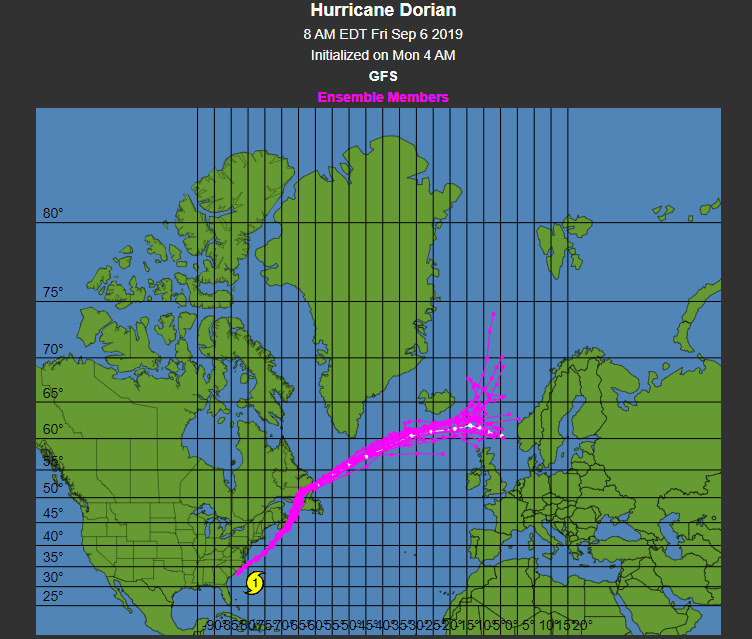 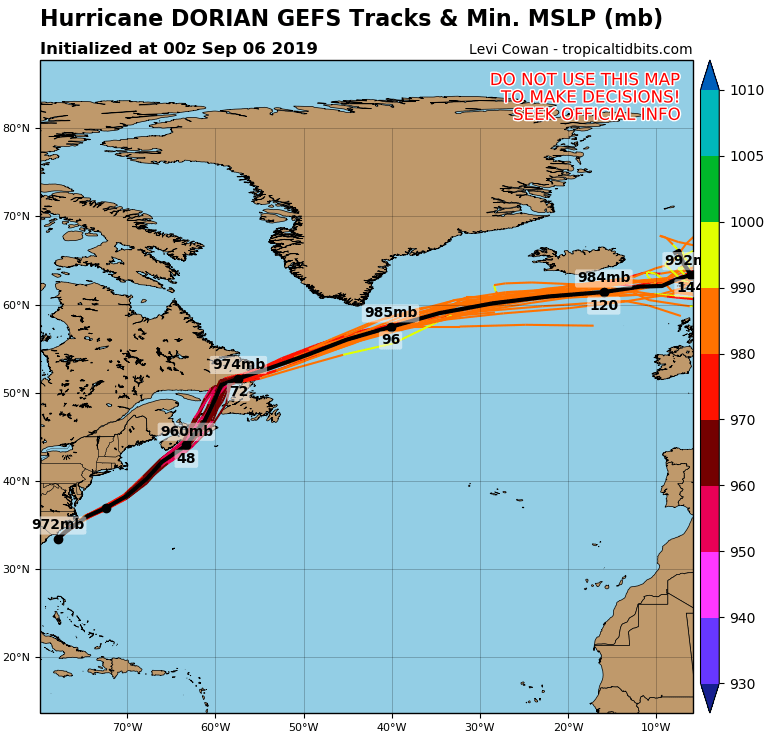 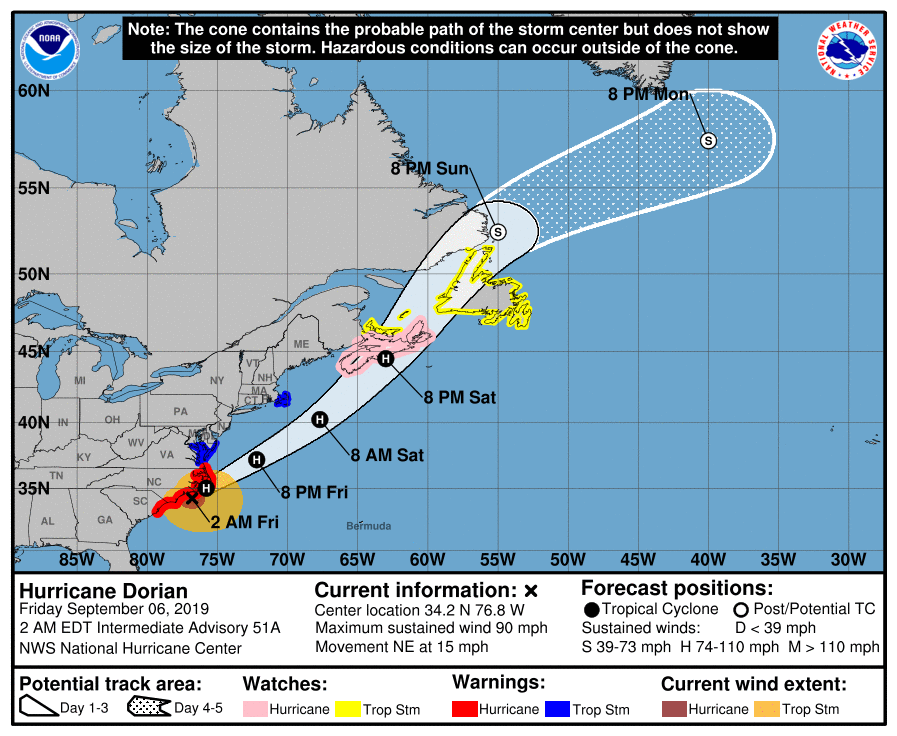 We are closely monitoring the evolution of both systems in the next days, so stay tuned for additional updates as both cyclones will come closer and more data / model outputs will be available!