Related to the change in the sub-polar circulation is coming this week and the long-lasting warm period across large part of Europe is finally coming to an end. First, the extra-tropical cyclone deepens and pushes into western Europe and moves towards the northern Europe. To the south of it, warm advection maintains over the rest of Europe. Towards the weekend, strong North Atlantic upper-level ridge develops an outbreak of much colder weather towards the south. Snowfall potential will also develop into some parts of Europe.

The large cyclone, precisely an extra-tropical cyclone (ex-Sebastien), will play the main role in the weather this week, as it slowly moves from western into northern Europe in the coming days. The broad low-pressure system over western Europe will result in persistent zonal WSW flow across western, south-central and eastern Europe – this means very warm weather will maintain across the low and mid-altitudes. Indeed many lowlands will remain trapped under strong thermal inversion and therefore experience colder weather, but the overall picture should support warm days across Europe until Friday. 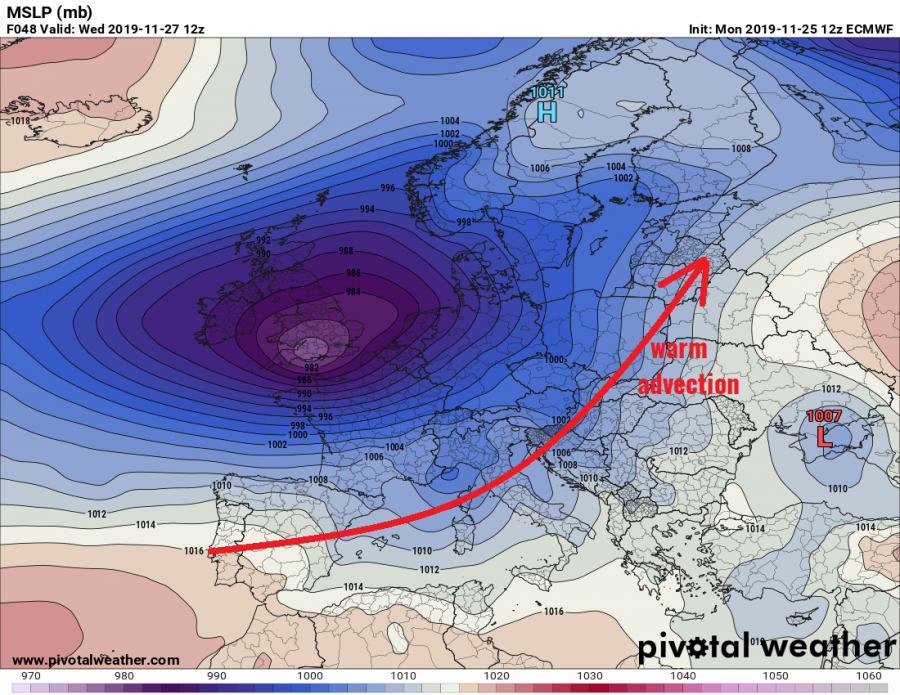 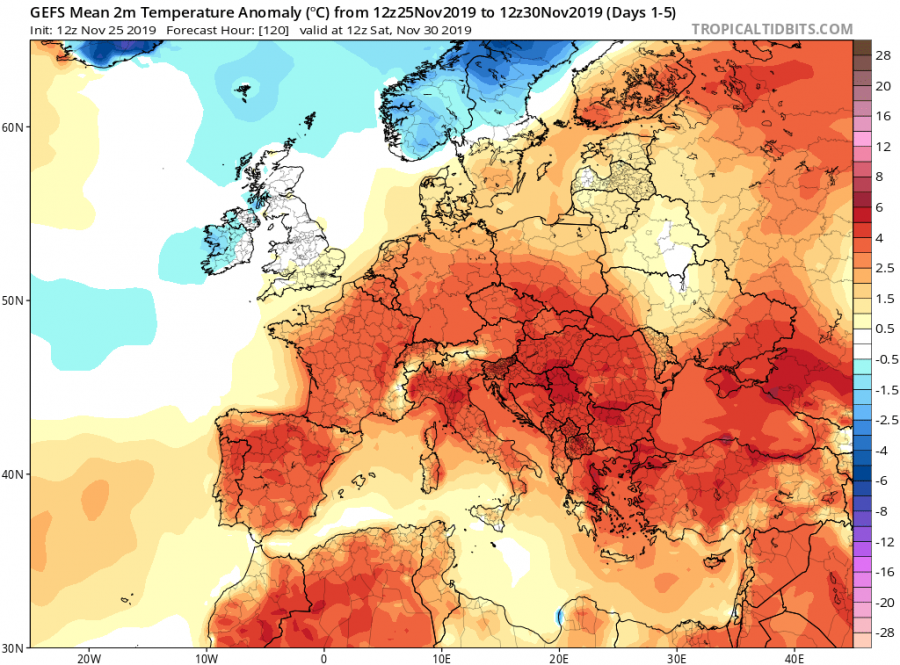 In the wake of a large cyclone, strong Omega blocking ridge develops over the North Atlantic while a deep long-wave trough intensfies over northern Europe. This causes the pattern flip and strong meridional northerly mid-level flow from the Arctic region deep south into continental Europe. Both global models ECMWF and GFS are actually in fairly good agreement regarding the pattern evolution through the last days of November into early December as seen below: 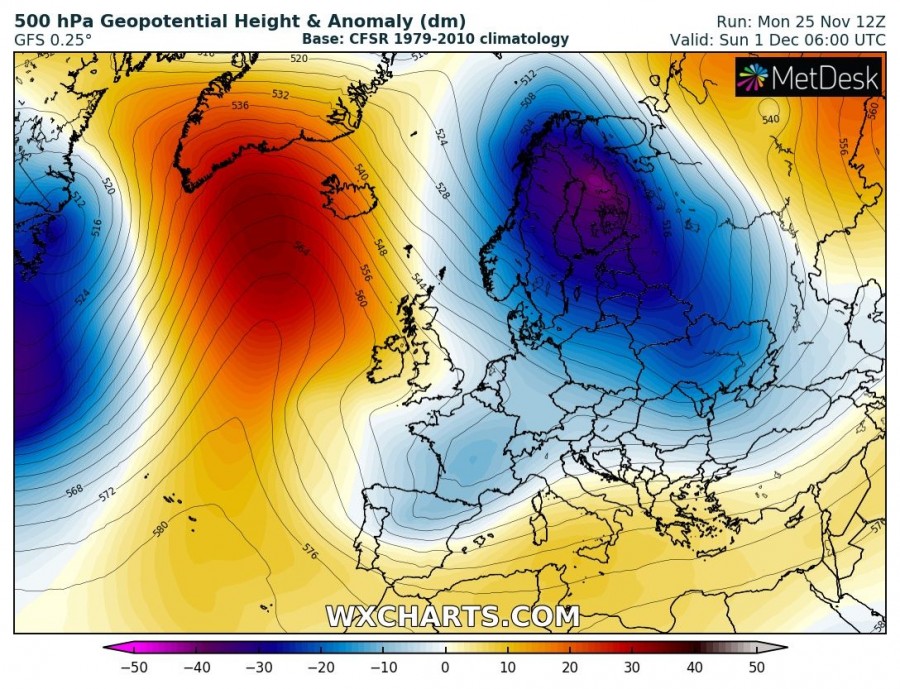 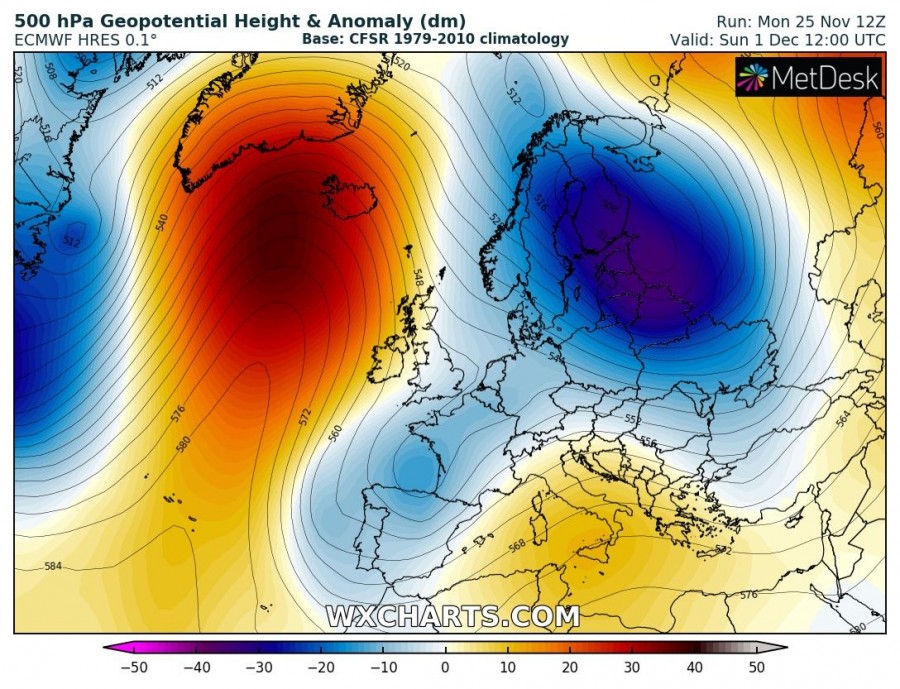 The cold outbreak starts on late Thursday, Nov 28th when strong meridional flow establishes to the east of a strengthening upper ridge over the N Atlantic. Cold air mass spreads into the British Isles, Ireland and towards Benelux overnight, intensifying through Friday when the surface front continues towards central Europe. Much colder airmass then maintains across western, central and eastern Europe over the weekend. 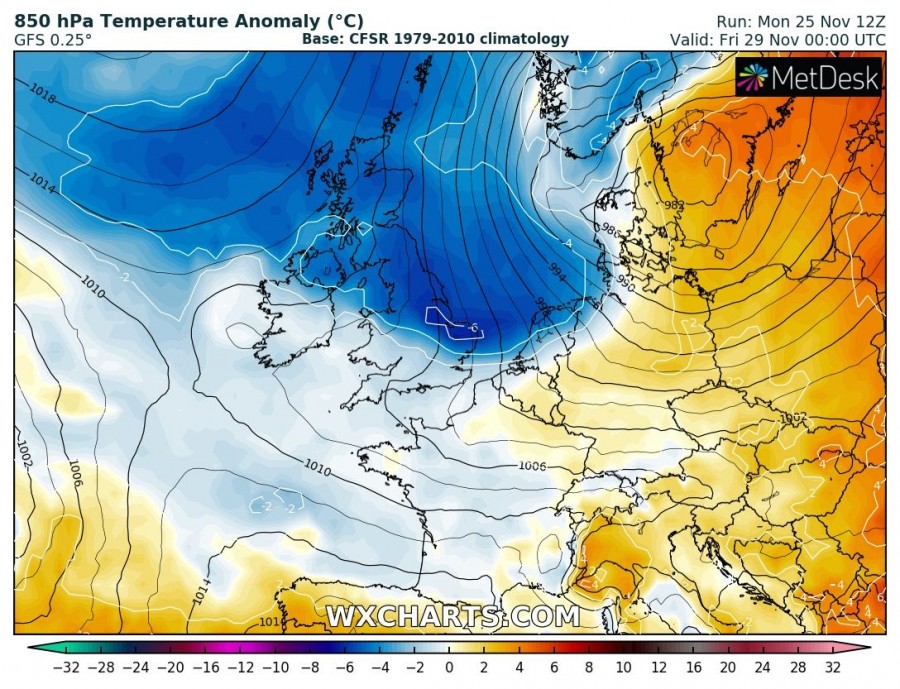 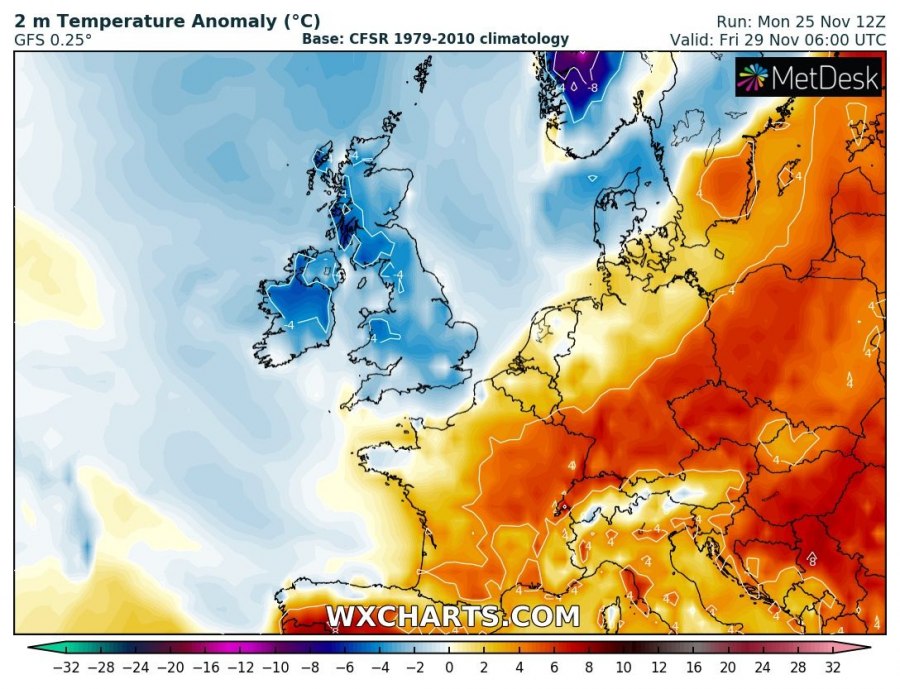 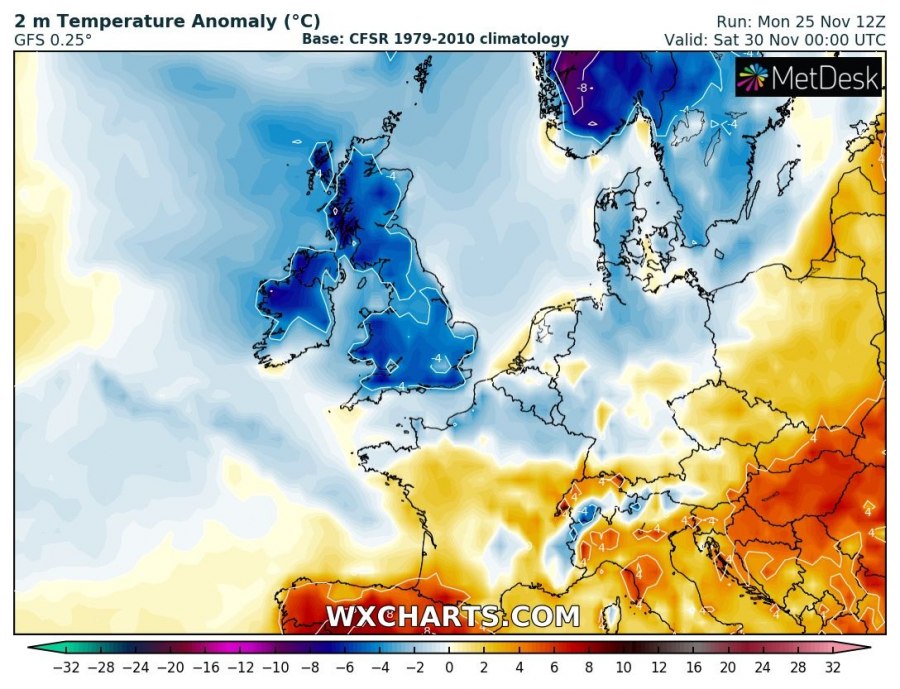 Through the early December (after Sunday, Dec 1st), strong ridging and high-pressure system over the North Atlantic gradually drifts onto western Europe, causing the cold airmass advection strengthening further south across east, central and southwest Europe. Winter weather will likely develop along the sharp surface cold front, including snowfall in the lowlands. Especially around the Alps, northern Balkans and eastern Europe. 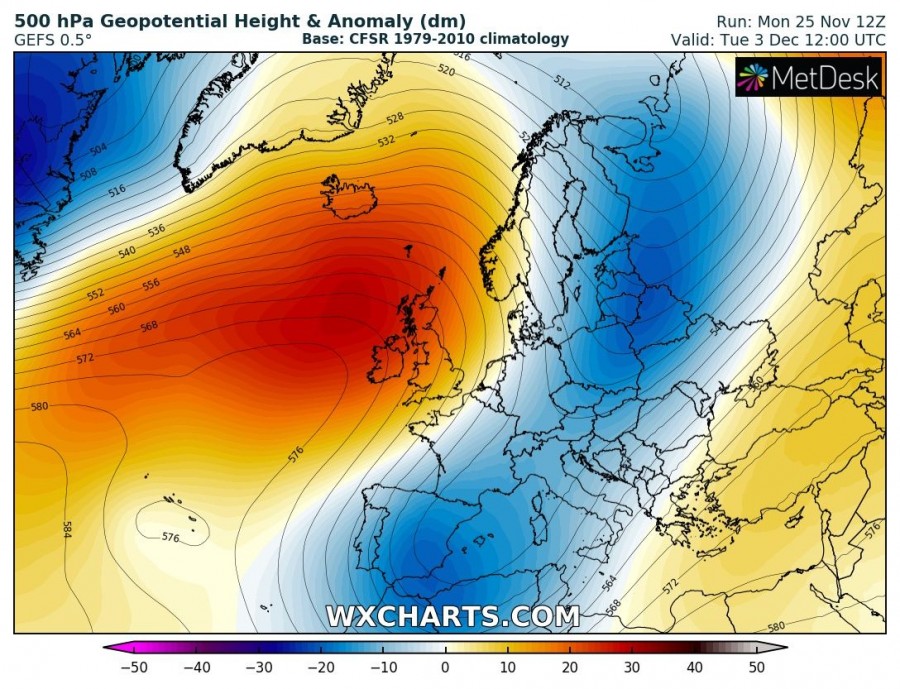 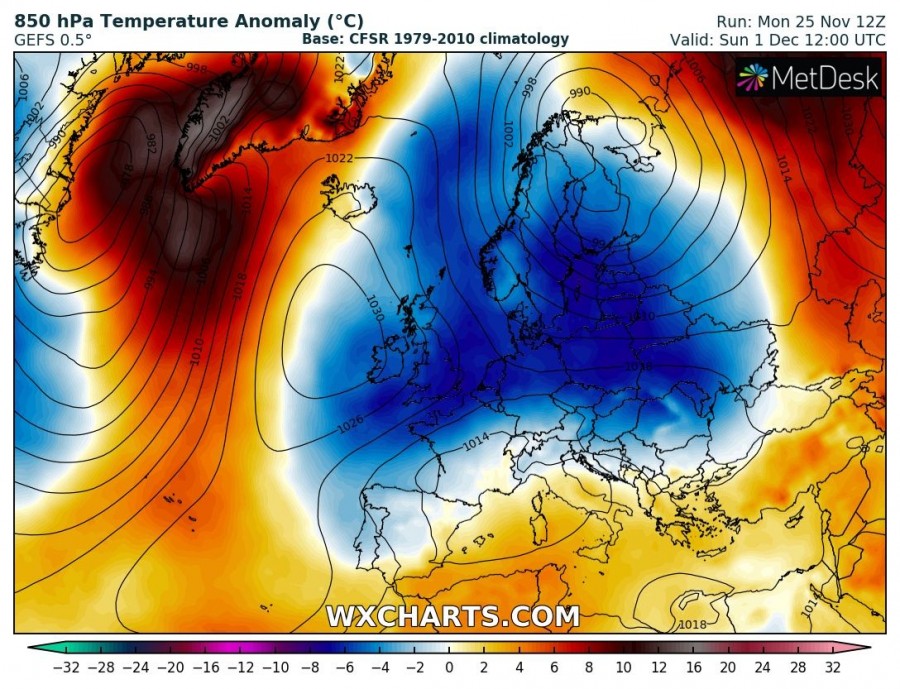 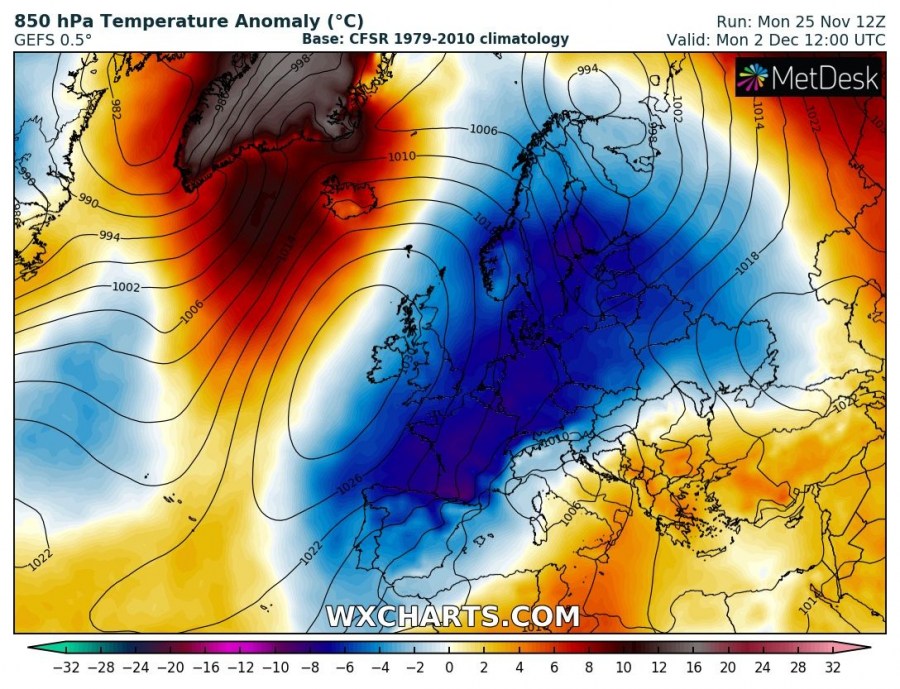 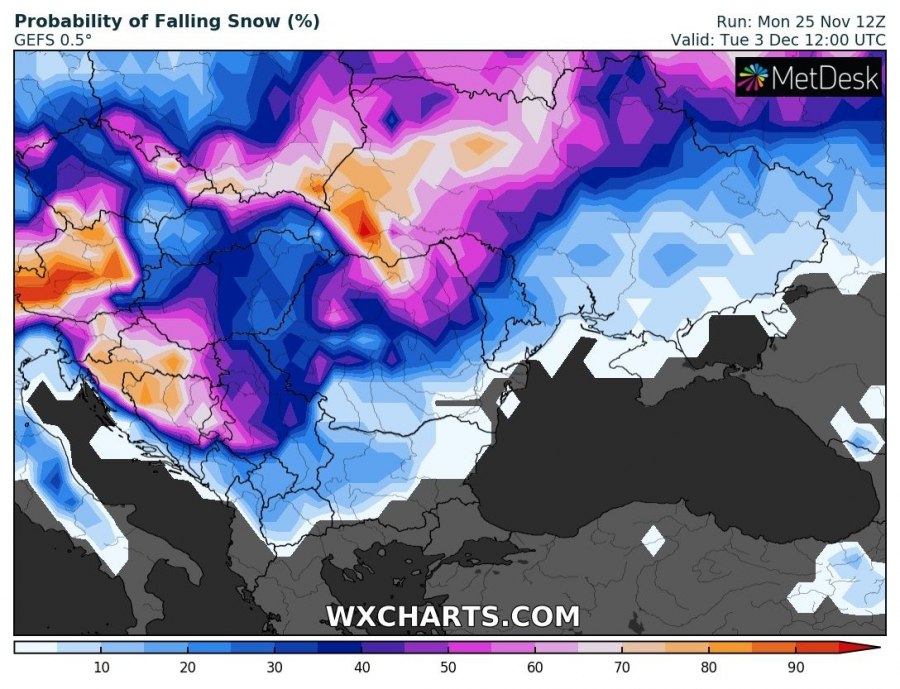 Snow chances will increase with time as cold airmass spreads further south after Saturday. As seen on the following maps, the probability of falling snow increases through the weekend over east-central Europe while early next week, somehow higher probabilities might also develop over parts of western and southwestern Europe. 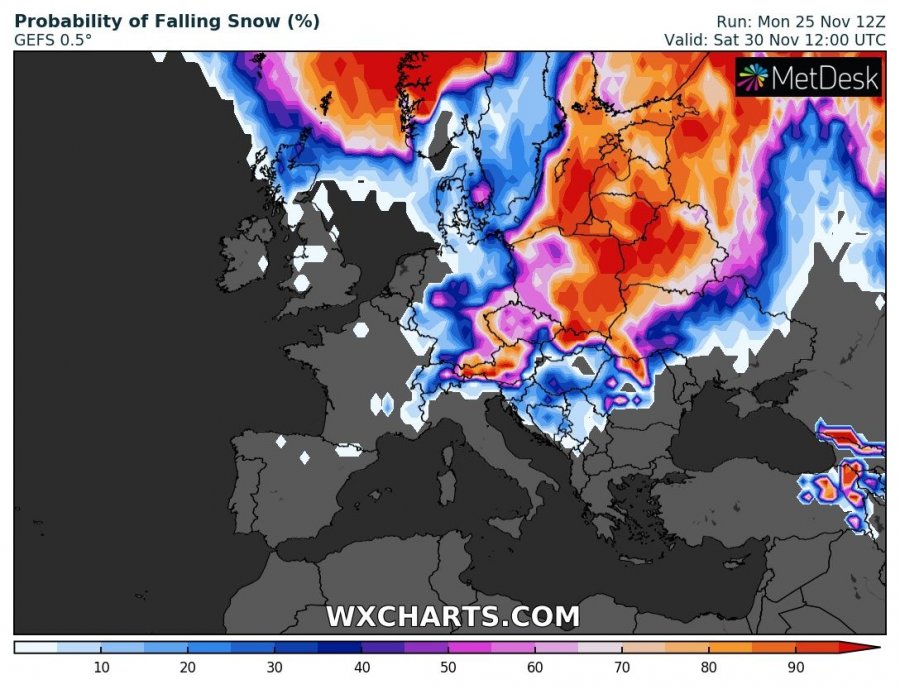 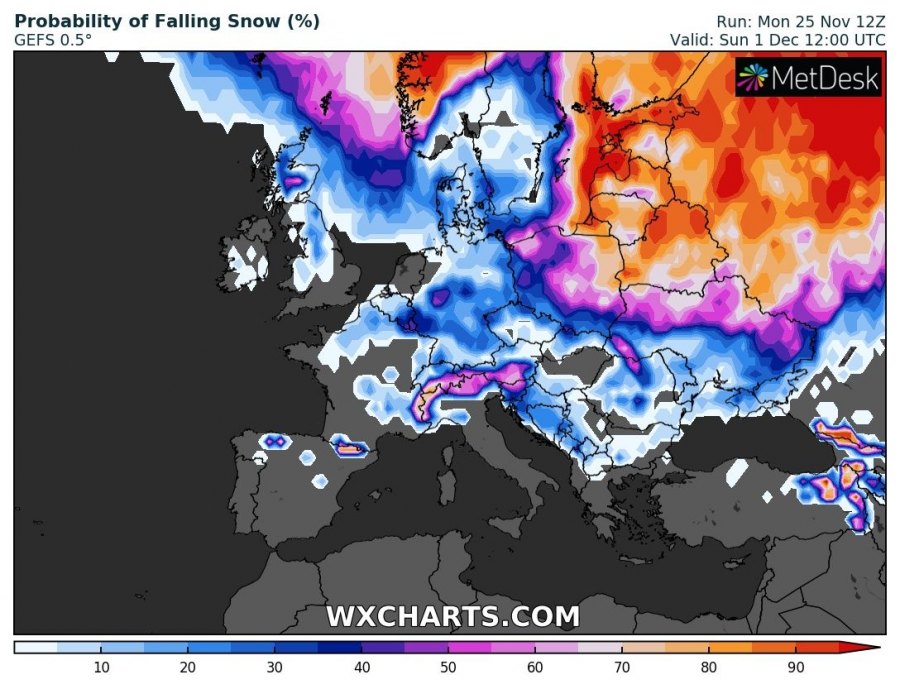 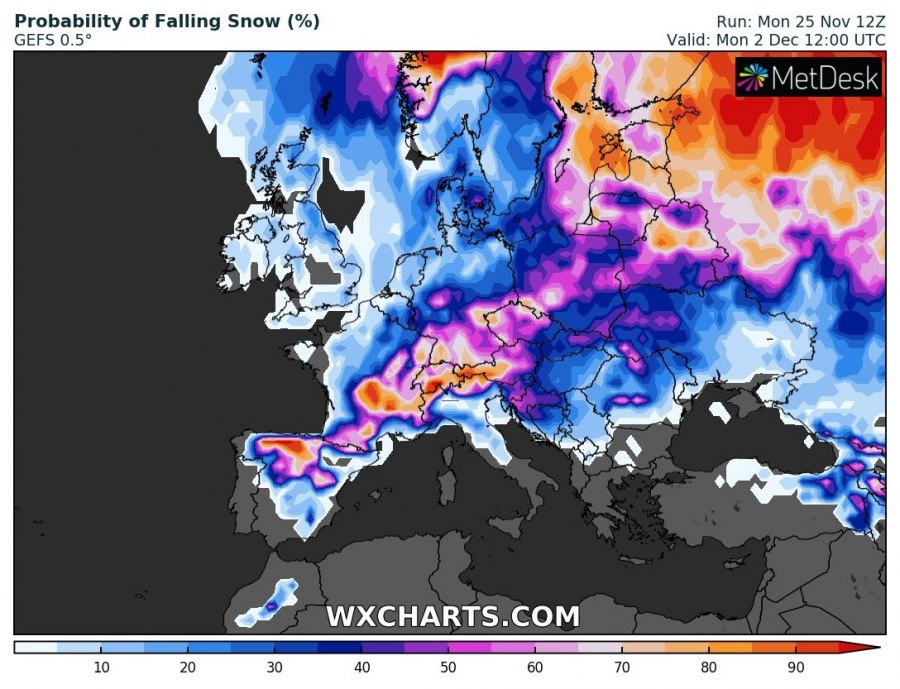 We are closely monitoring this week’s pattern evolution as the future trends suggest winter weather is finally developing over a large part of Europe. The current unusually warm period will be replaced by much colder weather and also increased chances for snowfall in the lowlands across parts of Europe. Stay tuned for further updates, available in the coming days.