Wednesday’s update on the approaching severe wind threat on Thursday, March 12th. As we discussed yesterday, a large cyclonic circulation over the North Atlantic had several mesoscale vortices, which organized into one intense core today. This low has now reached its peak and is moving towards western Europe. It will introduce a strong to locally severe windstorm across western Ireland and Northern Ireland (Donegal) tomorrow.

As of 06 UTC this morning, March 11th, the cyclone had a central pressure of 962 mbar. That is slightly lower than pressure reading yesterday afternoon. It is expected to continue east towards Scotland over the next 36 hours, reaching the west coast in the morning hours and passing the country during the afternoon. An associated surface cold front is already moving across western Europe.

Satellite imagery reveals an impressive structure of the organized core, a classic occlusion of the system near its peak. 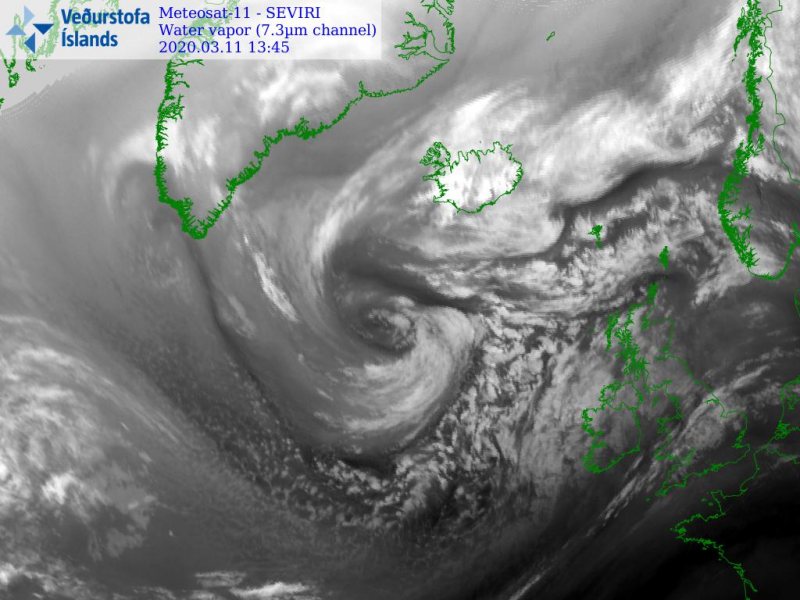 Here is a close-up view of the core:

The system is now near its mature stage and is expected to continue east over the next 36 hours, it will be weakening along its track but will still bring severe winds into western Europe. Its center is expected to cross Scotland tomorrow afternoon.

Peak wind gusts by ICON-EU, ARPEGE and ECMWF models – a broad swath will spread towards Ireland and UK tonight and tomorrow (Thursday):

Stay alert for severe winds and high waves along the western Ireland and Northern Ireland coast through Thursday!

Southwest winds veering west to northwest will reach mean wind speeds of 60 to 75km/h with gusts of 100 to 120km/h.
Due to a combination of waves, spring tides and surge, the possibility of coastal flooding is increased on Thursday.

Southwest winds veering west to northwest will reach mean wind speeds of 50 to 65km/h and gusts of 80 to 110km/h.

See also – an intense Arctic outbreak is also expected across southwest Canada and the northwest USA this week: