Europe has mainly been dominated by a powerful upper ridge lately which strengthens this weekend and establishes an omega blocking pattern. On its eastern flank, a powerful cold outbreak develops and brings much colder weather across the Balkan peninsula, Adriatic region and south-central Mediterranean. Severe blizzard conditions will develop over Greece on Saturday.

The setup supporting such evolution indicates a very powerful upper ridge / omega blocking pattern across the western and northern Europe where deep trough / cyclones are over N Atlantic (west side of the omega) and a short-wave trough drifting south along the eastern flank of the upper ridge. 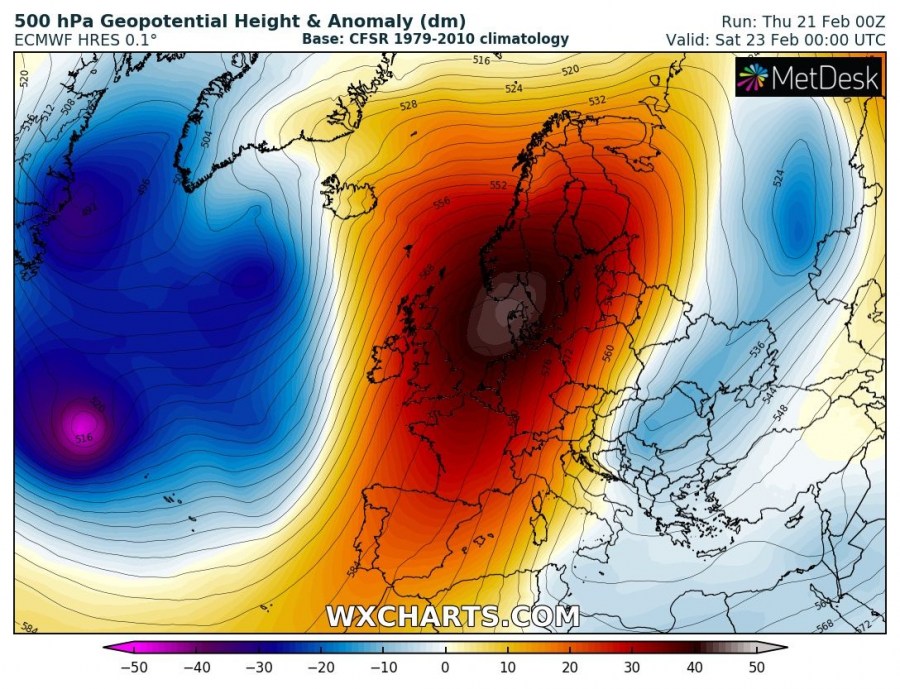 A strengthening high pressure system across Europe will support very intense wind field in the lowest levels, advecting very cold airmass from eastern Europe across the Balkan peninsula towards the Mediterranean. On Friday night, the 850 mbar temperature will dip close to -20 °C across the eastern Ukraine, Moldova and south Ukraine.

The 850 mbar temperature anomaly sequence reveals the cold outbreak starts tomorrow, Friday Feb 22nd morning, from western Russia into eastern Ukraine. It will then spread southwest across the Balkan peninsula and reach Bulgaria and southern Serbia by Friday night, continuing towards Greece, Adriatic sea and Italy by Saturday morning. Cold airmass will reach the southern Mediterranean by mid Saturday while it continues towards north Africa as well. Cold advection will start diminishing on Sunday.

Looking at the 2 m temperature across the SE Europe from Friday through Sunday: Friday will be cold across the far eastern Balkan while the rest of the peninsula remains very warm. On Saturday afternoon, very cold temperatures will be spread across the whole Balkan peninsula, western Turkey, Italy and also across the southern Mediterranean. Similar situation on Sunday when it finally becomes warmer again from eastern Europe towards south. Very cold weather remains over Greece!

Stay tuned for further updates on the pattern evolution soon!