NOAA forecasters at the Climate Prediction Center are expecting a typical La Nina winter 2020-21 across the United States and Canada. A cooler and wetter winter for the North is forecast, but milder and drier winter across the southern United States. Drought could worsen across the western half of the continental US.

We have had the first look over the upcoming winter for the United States and Europe earlier this month. This week, the National Oceanic and Atmospheric Administration (NOAA) issued its official winter 2020-21 outlook.

It appears likely that the southern and eastern United States could again see a rather mild winter, similar to the past two winters. A fresh winter outlook by NOAA hints a milder than average conditions across a large part of the continental United States, but cooler across the north-northwest parts over the coming months.

With the significant cooling of the tropical Pacific Ocean waters, strong La Nina (negative ENSO phase) is developing. Based on the historic NOAA data, La Nina reflects into warmer and drier across the South. La Nina, typically, shuts down the moisture transport from the Pacific into California.

According to NOAA, below-normal temperatures are forecast across the northern Pacific Northwest into the Northern Plains and across southern Alaska for the coming winter months ahead.

Further south, the greatest chances for warmer than normal winter are forecast. Warmer conditions are likely to extend across the Southern United States from the Southwest, across the Gulf states, and into the Southeast parts.

The NOAA map shows the probability (percent chance) that winter temperatures (from December 2020 to February 2021) across the United States of the climatological record (1981-2020). Red colors indicate a warmer-than-average month is most likely, while blues indicate a cooler-than-average month is most likely. Darker colors mean higher probabilities of occurrence. 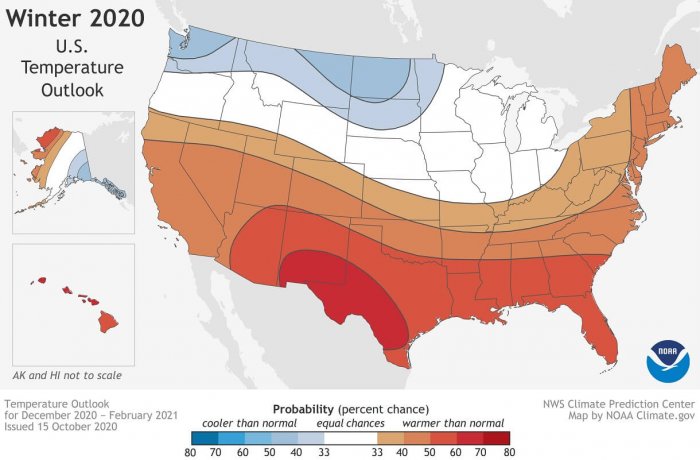 More modest probabilities for warmer temperatures are forecast in the southern parts of the west coast. Also from the Mid-Atlantic into the Northeast. While Hawaii and western and northern Alaska are forecast to see above-average temperatures this winter.

Both the AccuWeather and The Weather Channel (TWC) also forecast winter to be milder than average across a large part of the United States, but cooler across the northern states and parts of the Pacific Northwest.

Note: Intense cold outbreaks of Arctic air mass are quite possible during La Nina winters, but the worst, extreme cold is tied to the northern Rockies, Plains, and Upper Midwest. The cold could also expand into the East Coast but with less intensity, as it typically vanishes quite significantly further east.

NOAA experts say that wetter than average conditions are forecast across the northern parts of the United States this winter 2020-21. A higher than normal amount of precipitation is likely across the Pacific Northwest, across the Northern Plains, Great Lakes, and into the Ohio Valley. Also across Hawaii and northern Alaska. 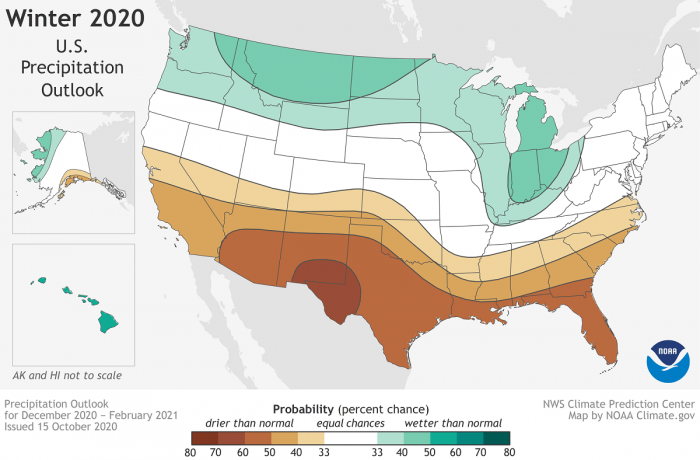 While further south across the Southern United States, greater chances for drier than average conditions are forecast for this upcoming winter. Especially across the Southwest, across Texas along the Gulf Coast, and also in Florida.

Some chances for drier conditions are forecast in southern Alaska, and from California across the Rockies, Central Plains, and into the Southeast this winter.

DROUGHT TO WORSEN ACROSS THE WEST

But the greatest concern is the persistent extreme drought conditions across the nation, as currently, more than 45 percent of the continental United States is experiencing drought.

The NOAA map shows that extreme (bright red) to exceptional (dark red) drought conditions were present across much of the Western United States at the beginning of October 2020. There were lesser signals of drought or dry conditions across much of the Eastern and Southeast parts. Tons of rainfall has occurred in these parts of the country, mainly from the tropical systems over the past months. 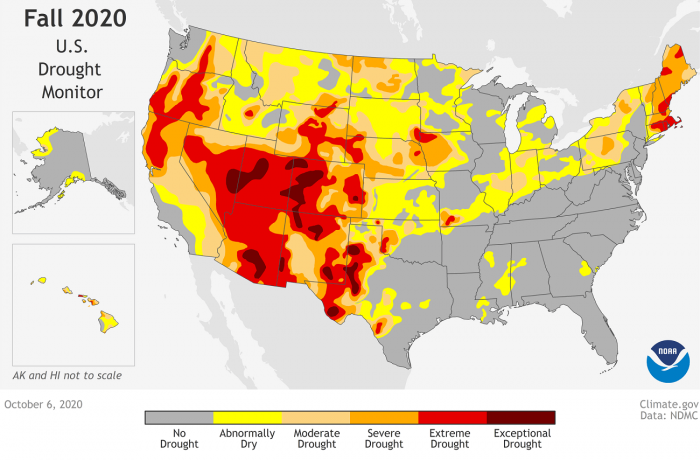 There is a widespread drought ongoing across the western half of the continental United States. This is a result of the weak Southwest summer monsoon season this year and near-record-high temperatures, NOAA says. Drought is also present in parts of the Northeast, Ohio Valley, Hawaii, and Alaska.

The NOAA map drought outlook shows that the upcoming three-month period (November 2020 to January 2021) forecast that drought is likely to improve and even worsen across the Western United States over the coming winter months. 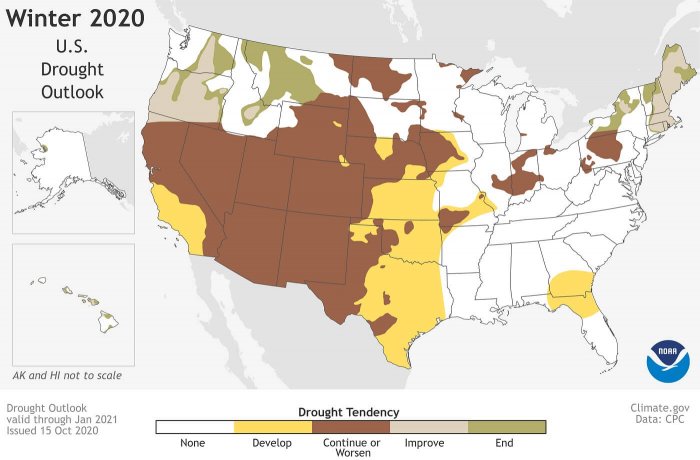 The ongoing and strengthening La Nina climate pattern is expected to maintain and also worsen drought across the southern and central Plains, eastern Gulf Coast, and in California during the winter months ahead.

Some improvements are expected across the northern Rockies, Northwest, New England, Alaska, and Hawaii, however.

Drought is a now a serious concern for the desert Southwest, due to a significant lack of rainfall this year. With the strong La Nina developing, it will most likely continue to stay much drier than normal.

During the La Nina winter patterns, the Pacific jet stream often meanders high into the North Pacific and it is less reliable across the southern tier of the United States. 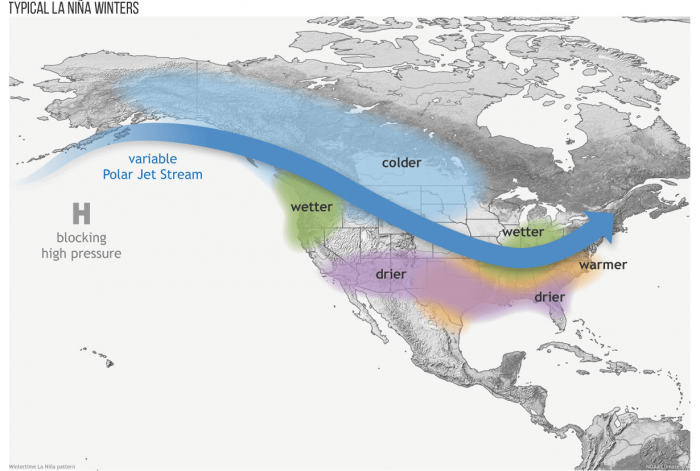 With such a pattern position, the jet stream results is cooler and wetter winter in southern and interior Alaska and the Pacific Northwest. The southern portions of the United States have a tendency of warmer and drier winter than average.

Ohio and Upper Mississippi River Valleys may also be wetter than the usual winter.

During El Nino years, these winter deviations from the average are approximately reversed, NOAA notes. The El Nino and La Nina events are opposite phases of a natural climate pattern across the tropical Pacific Ocean, These cycles swing back and forth every 3-7 years on average.

WHAT ABOUT THE REST OF OCTOBER?

A dynamic weather pattern is seen across the Contiguous United States over the next two weeks. With the ongoing cold pattern, some snow is forecast for the northeast.

Another, stronger cold outbreak develops this weekend, from Canada into the northern United States. The cold is also forecast to spread across the Plains and Midwest by Monday. 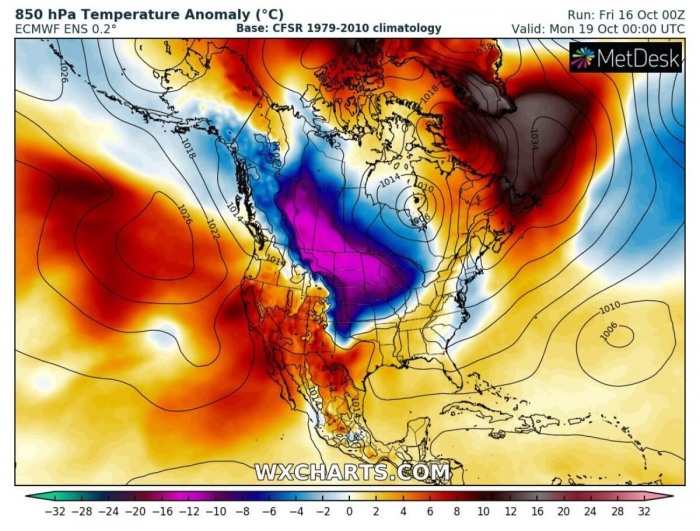 Winter weather is forecast to persist/develop over the northern and northwestern parts of the United States, including much of western and central Canada. The outbreak should bring some fresh snow into Montana, Wyoming, Northern Dakota, Minnesota, and Wisconsin.

There is also some snow possible into Nebraska. While lots of snow is expected across Alberta and British Columbia, Canada. 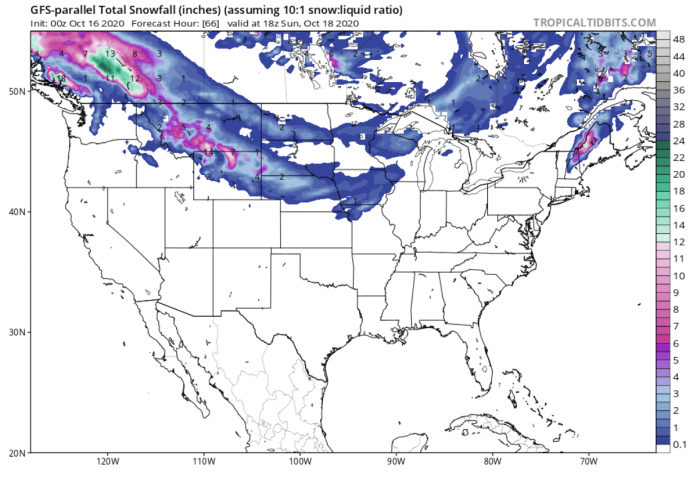 While next week, warmer weather is likely to return across much of the continental United States, cold will be tied up to the international US/Canada border.

But towards the end of October, there is an increasing potential for a significant Arctic outbreak to develop across a large part of North America. 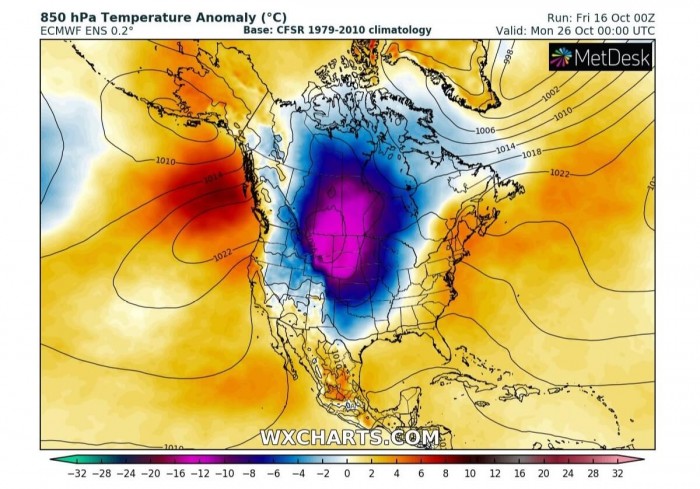 Attached is the animation through the remainder of October. Graphics reveal a developing 500 mbar pattern and the 2m temperature anomaly across the North American continent.

As we discussed deeper in our first look for the winter forecast 2020-21 in early October, La Nina will strongly affect the winter patterns across the United States. The NOAA official winter forecast finds very similar trends for the upcoming months.

A typical La Nina** type winter with most of western Canada and the United States likely to expect colder and snowier conditions.

But milder and drier further south, which will likely worsen the ongoing drought conditions across the Western United States.

** Stay tuned for the special update on a rapidly developing La Nina conditions – coming up this weekend!