An impressive warm spell continues to affect East Asia early this week, thanks to unusually favorable weather patterns across the continent over the weekend. The early season heatwave has lead to numerous maximum temperature records across China and South Korea.

A large part of eastern Asia has set all-time records this weekend as an impressive early-season warmth sweept across central Asia, reaching China and the Korean peninsula. This incredible warm spell started near the Black Sea and the Middle East earlier and spread across Central Asia into the eastern parts of the Asian continent over the weekend.

Strongly anomalous weather across the globe has no end it seems. Just a few days after a historic Arctic blast across portions of the southern United States, eastern Asia including China and the Korean peninsula experienced a record-breaking warmth in late January. Setting up new all-time records for the countries. 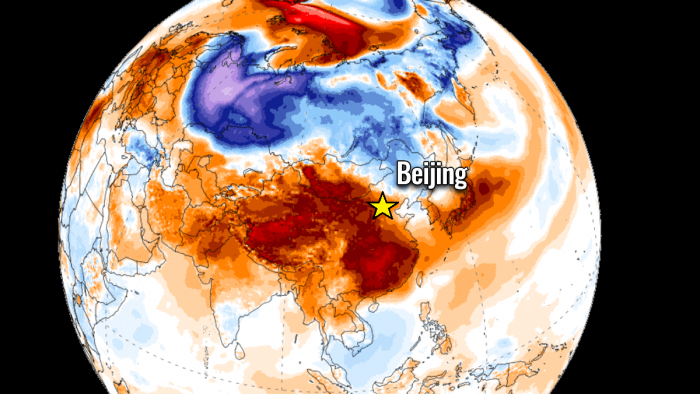 In between the still frigid cold air mass over Russian Siberia (northern Asia) and record-setting heatwave further south, a strong jet stream is placed. Racing from west to east.

The significant warm spell continues to affect East Asia early this week, with more very warm weather days expected until Friday. Attached below is the 2-meter temperature animation across China and surrounding countries of Eastern Asia.

Let’s take a look at some of the records being set this past Sunday, February 21st.

The capital of the Republic of China, Beijing, has set an unprecedented warmth record this Sunday, reaching the highest temperature ever recorded for the city in February. Beijing thermometer reached +25.6 °C!

And this was just one day after its earliest 20 °C temperature ever recorded in February.

What seemed almost impossible, Sunday (February 21st) smashed its February record by almost 5 °C. So basically the record-setting Saturday’s temperature did last only one day and has been broken with a huge difference a day after.

A recorded temperature of more than 25 °C (the usual threshold of a so-called ‘Spring day’ in the statistics) has also set a new record as the earliest record of 25.0 °C. 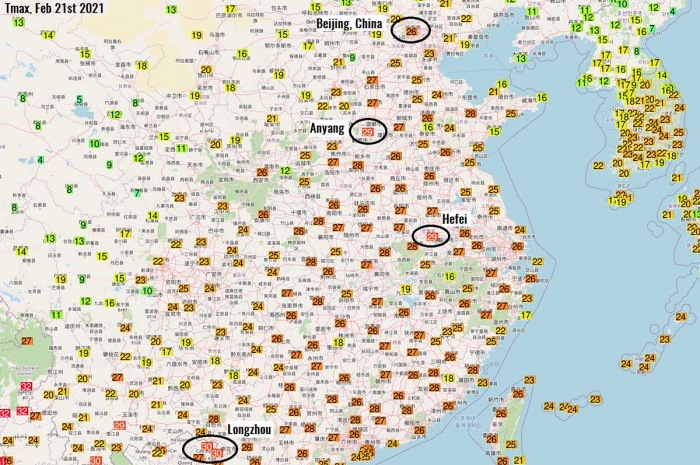 But, what has been even more extreme is the fact, that the city of Beijing has never recorded more than 20.0 °C in February. On Saturday, it was already a historic day in Beijing, with the peak temperature reaching +20.8 °C – the highest temperature ever recorded in February.

Note, that the average maximum temperature in Beijing during February is only +4 °C, so Sunday’s temperature of +25.6 °C is an exceptional nearly 22 °C anomaly above the long-term monthly average for the city.

It was even warmer to nearly hot weather further south across southern and southeastern China, with temperatures from 28-30 °C in some places, as we can see from the attached chart above.

The record-breaking heatwave was not only affecting China, but also the Korean Peninsula.

According to the Korean Meteorological Agency (KMA), South Korea recorded its warmest February temperature Sunday this weekend, Feb 21st. A weather station in the city of Pohang has recorded the maximum temperature of +24.9 °C, surpassing the previous February record of +24.5 °C set back in 2004 at the station Jeju I. 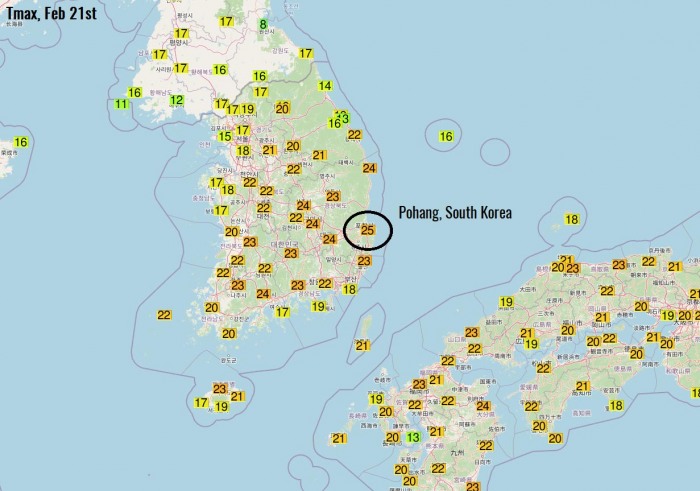