We are now seeing the grand finale to the meteorological winter 2020/21 across southern Canada and the United States. Thanks to the further southward progress of the break-off lobe of the Polar Vortex this weekend. Extremely low temperatures have spread to the deep South where major snowstorms and dangerous ice storms are expected in the coming days.

Sadly, the working week has ended with a deadly 130+ cars pileup on icy Texas Interstate I-35 near downtown Fort Worth. At least 6 people were killed and dozens were sent to hospitals as a tangle of semitrailers, cars and trucks had smashed into each other during the freezing rain event on early Friday morning.

The side effects of the Polar Vortex collapse aloft came with a bang for this February, the final winter month, that’s for sure. Extremely cold air spread from Canada into the United States with temperatures even below -30 °F, and life-threatening wind chills reaching down to -60 °F near the International border with Canada. 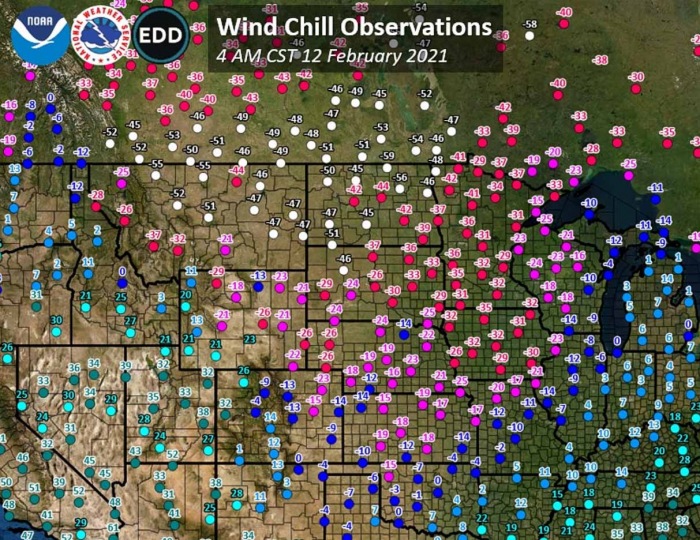 These frigid cold temperatures are gradually spreading further south this weekend and are forecast to reach the Gulf Coast on Sunday. This has already been a historic cold for many areas and even more low and high daily temperatures will be challenged and easily broken from Sunday through Tuesday.

An extensive Arctic high will continue to cause bitterly cold temperatures across much of the CONUS through early next week, and widespread winter weather is forecast along its periphery.

The video animation below shows the progress of the Arctic cold into the Gulf Coast and a major snowstorm develop across the Plains into the Mississippi Valley and the East Coast until Tuesday.

More than 100 million Americans are currently under Winter Storm Warnings, Winter Storm Watches, or Winter Weather Advisories as coast-to-coast impactful winter weather is ongoing and is forecast to continue over the next few days. 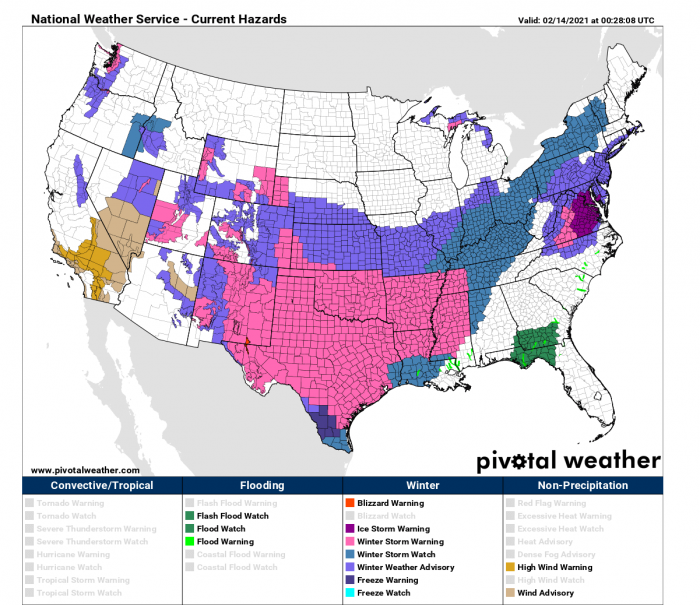 The Icy weather is ongoing across parts of the Mid-Atlantic, continuing through tonight into early Sunday.

A major Winter storm currently affecting portions of the West will spread heavy snow and significant ice accumulations to the south-central Plains eastward early next week with a huge amount of snow locally expected.

Extreme cold, frigid Arctic air, and dangerously cold wind chill to persist in the Heartland into at least the mid-next week, possibly even until the next weekend, based on the latest model guidance. The temperatures are even more than 50 degrees lower than normal across Oklahoma and Texas this weekend. 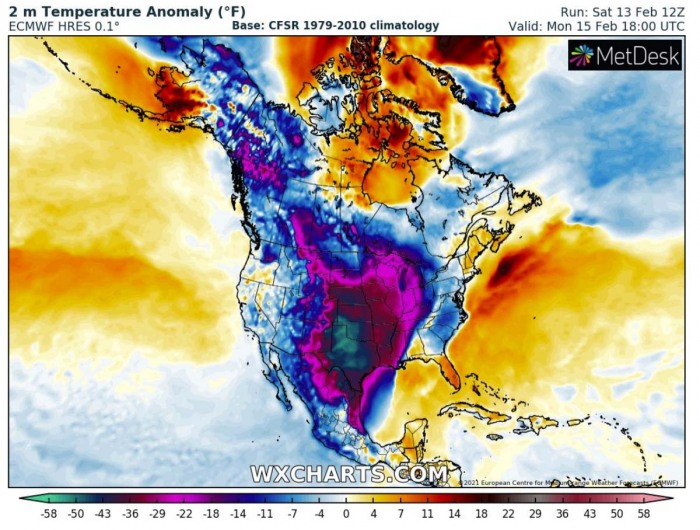 The main driver behind this historic, record-breaking cold across the nation is the Polar Vortex spinning above the North Pole. Two record-breaking pressure events during late December strongly disturbed its circulation, lead to its collapse.

Some strong pattern dynamics were ongoing across the North American continent over the last few weeks, basically from mid-January. Blame it to the Polar Vortex collapse in early January. After the SSW event (Sudden-Stratospheric Warming) causing this collapse, the dominant feature was the high-pressure system over the Arctic region becoming very strong over Greenland. 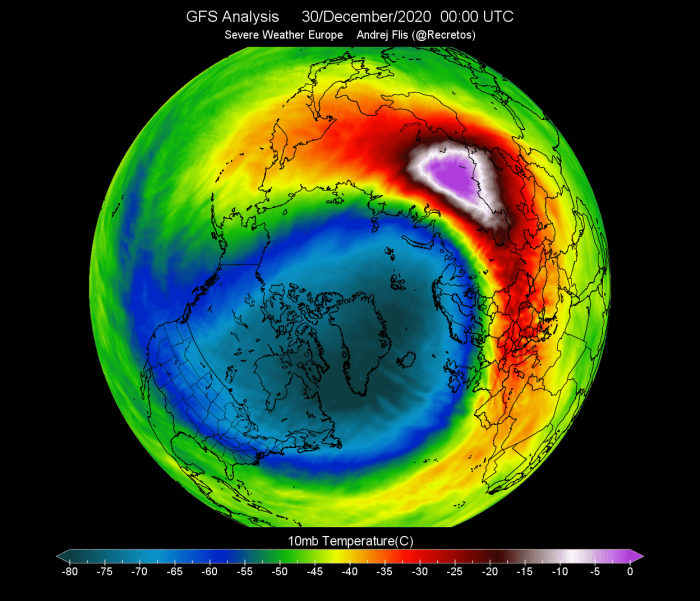 Earlier, prior to the Polar Vortex collapse, December was milder than normal across North America, especially over Canada. Such pattern also continued into the first half of January, as it normally takes a few weeks to show the effects of the Polar Vortex disruptions. Most of the continent was warmer than normal, being the warmest across eastern Canada under the high-pressure system from Greenland.

The stratospheric warming wave has moved across the entire North Pole in the stratosphere, effectively splitting the cold-core of the Polar Vortex into two parts. One part of the broken Polar Vortex was pushed over North American and one part over the European side.

The blocking High over the Arctic/Polar region moved further towards the polar circle, turning the very cold pool deeper towards the south across into the North American continent. And really escalated through early February and it continues now into the mid-month. A historic frigid cold outbreak is underway for a large part of the United States.

The next three days will be the final blast of the Arctic air across the country. All activity will be related to the southward progressing large-scale high-pressure system. It has near 1050 mbar in its center over the far northern Plains.

A shallow low is off the Mid-Atlantic, but a potent low is deepening over the Rockies and worsening conditions towards the southern portions of the US. 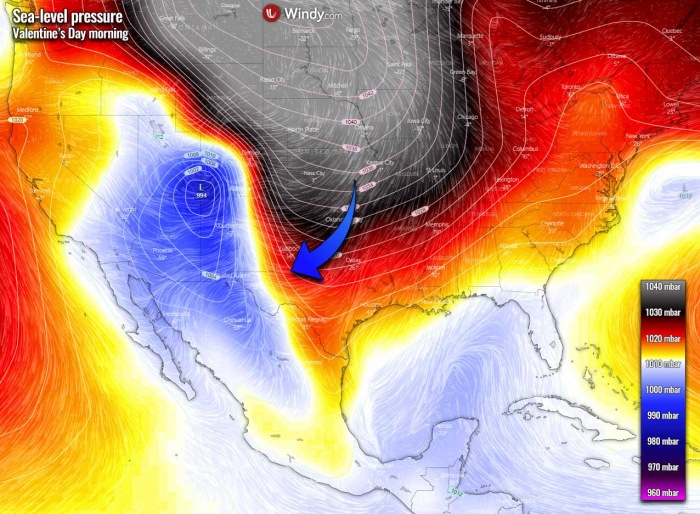 Storm total freezing rain amounts could accumulate to a quarter-inch, with locally higher amounts of a half inch possible. Accumulations of this magnitude will likely lead to downed tree limbs and power outages, as well as dangerous travel conditions.

In the West, snowy and icy conditions are ongoing as Pacific high moisture advecting into the West coast and interacts with the cold air in place. Even the lower elevations of the Pacific Northwest, including Seattle and Portland, have seen snow with this event. Precipitation will gradually wind down tonight. But then, another low-pressure system approaches and moves through the West, leading to additional precipitation.

As the upper-level trough associated with the first wave of precipitation drops southeastward through the Four Corners region, it will combine with some Gulf of Mexico moisture to produce widespread snow across parts of the Central/Southern Rockies and Central/Southern Plains by Sunday, spreading into the Mississippi and Ohio Valley by Monday. 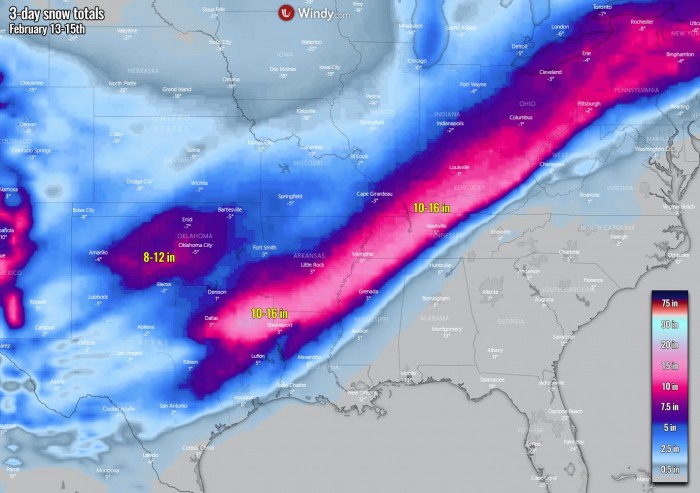 Significant snow totals of 5-15 inches are forecast across much of Oklahoma and into northern Texas. The swath of the most excessive snow totals spreads across the mid-Mississippi Valley towards the TN/KY into the Ohio Valley. South and east of the snow nearer to the Gulf Coast, an icy wintry mix is expected.

Significant freezing rain is likely to develop from the southern Plains towards the northeastern U.S. later Monday into Tuesday. Some extreme amounts of ice are forecast from northeast Texas to Arkansas and towards southern Illinois. 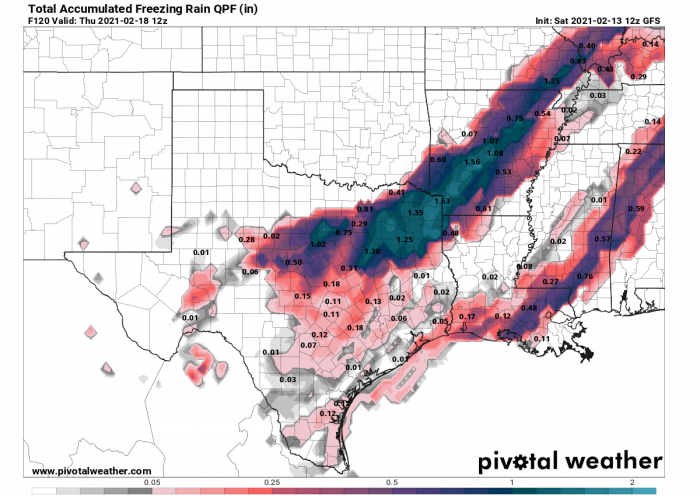 Even 1-1.5 inches (3-4 cm) of accumulated ice. That’d be destructive for the trees and could lead to significant power outages and traffic issues. Especially as temperatures will be very low and salting will not be that effective anymore.

Due to these dangerous, life-threatening conditions coming us, more than 100 million Americans are now under a Winter Storm Warning threat this weekend, valid until Tuesday morning. 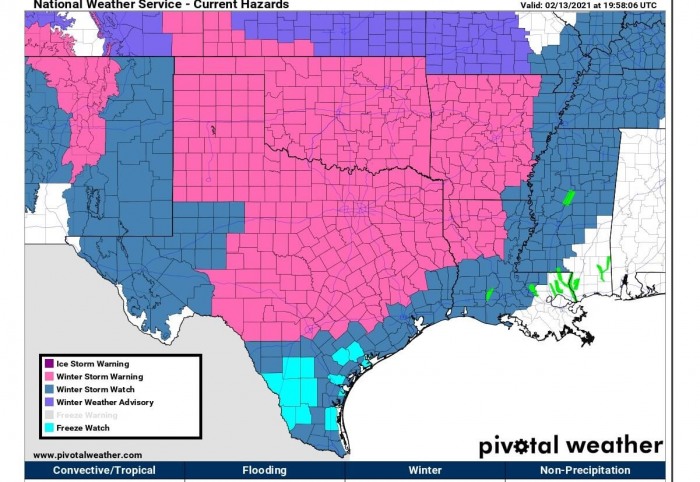 Underneath the very strong surface high-pressure system, the bulk of the country especially east of the Rockies will continue to see dangerous and record-breaking cold into the first part of next week.

The north-central U.S. should once again see high temperatures below 0F on Sunday, with single-digit highs stretching as far south as the Texas Panhandle. 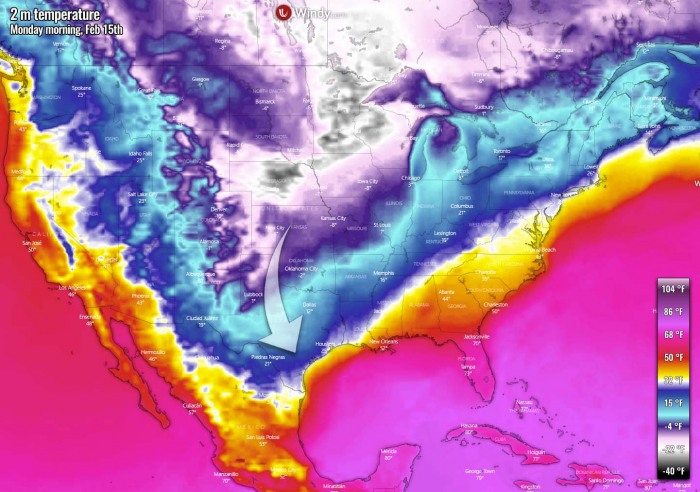 How intense the cold pool actually happens is what is best seen on the attached meteogram forecast chart for the city of Dallas, Texas. We can see that the long-term normal at 850 mbar level (approx. 1300-1400 meters above sea level) is around 45 °F (+7 °C) through mid/late February. Over the next few days, the temperatures will be down to 8F (-13 °C) on Monday. That is around 45 °F (20 °C) below the average. 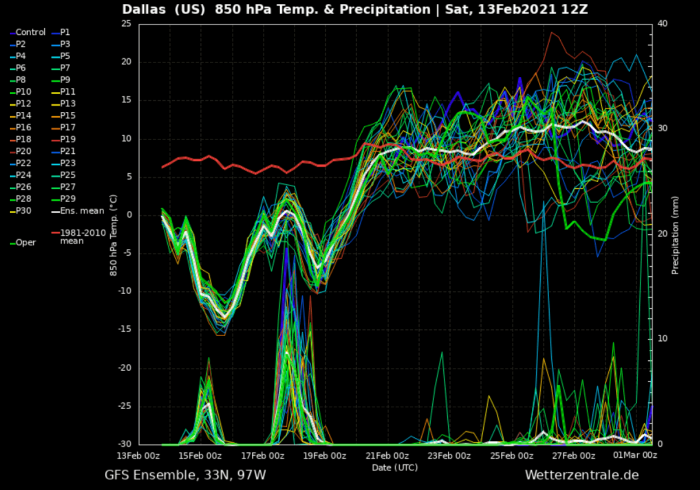 Low temperatures are forecast to be as cold as -30 degrees Fahrenheit in the Northern Plains to Upper Midwest. Add in gusty winds and the result is life-threatening wind chills between -30 to -60 degrees F in the north-central Contiguous US. Wind Chill Advisories extend as far south as the Southern Plains.

Extremely low wind chills are also forecast for parts of Texas on Monday morning. Down to near -20F in northern parts. And even near-zero °F along the Gulf Coast. Something you don’t see every day, not even every winter there. If any winter. Farther north, wind chills remain very low, even 40 below across Minnesota. 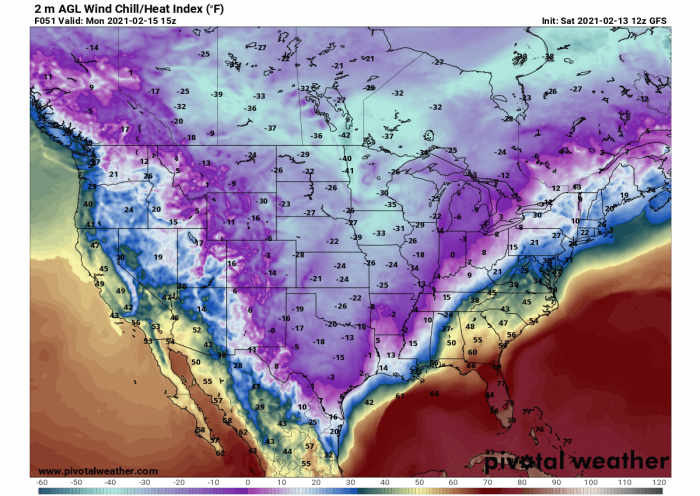 Hundreds of daily low maximum and minimum temperatures will be broken in the coming days. But also some February and even all-time low-temperature records could be challenged as one of the most intense Arctic cold outbreaks in decades is underway.

The weather finally improves a bit after Monday as the Arctic High begins weakening its strength further north. This also pushes the cold pool further east into the Mississippi Valley through Tuesday and Wednesday, while gradually losing its intensity.

But Tuesday will be yet another extremely cold day for the northern half. Nebraska, Iowa, and Minnesota will again see 20-30 degrees below in the morning hours. 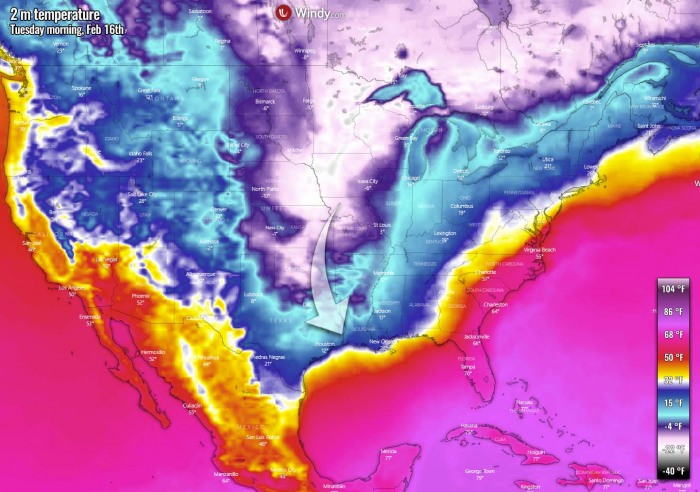 The southern edge of the cold pool will continue surging east along the Gulf Coast, reaching Florida Panhandle as well. And indeed also spread east farther north across the Southeast US. Low to mid-10s °F will likely develop in southeast Texas and southwest Louisiana, which’s extremely cold for the region and could challenge some all-time records.

And then, to add some extra, there is another concerning event as a new wave emerges from the west late Wednesday into Thursday. It could bring yet another powerful winter storm threat for the Southeast US. With additional snow and also dangerous freezing rain. Including severe storms further south.

***The images used in this article were provided by Windy and WXCHARTS.