Conditions across the North Pacific are worsening as a very impressive frontal system is undergoing an explosive development, expanding its size with rapidly deepening central pressure. It had a drop of 23 mbar during the past 12 hours (Note: Explosive cyclogenesis occurs if the central pressure decreases by 24 mbar (hPa) or more in 24 hours). The cyclone will continue deepening today and develop a violent hurricane-force wind field moving towards the Gulf of Alaska, affecting south and southeast Alaska through Wednesday. Significant waves and major swell, as well as a major snowstorm with intense blizzard conditions, are expected across the coastal areas.

06 UTC pressure analysis today, Jan 28th – the central pressure was at 968 mbar while the rapid intensification is underway. It expected to drop around 955 mbar until tomorrow morning. There are hurricane-force winds developing around the core, gradually spreading towards the north into the Gulf of Alaska. 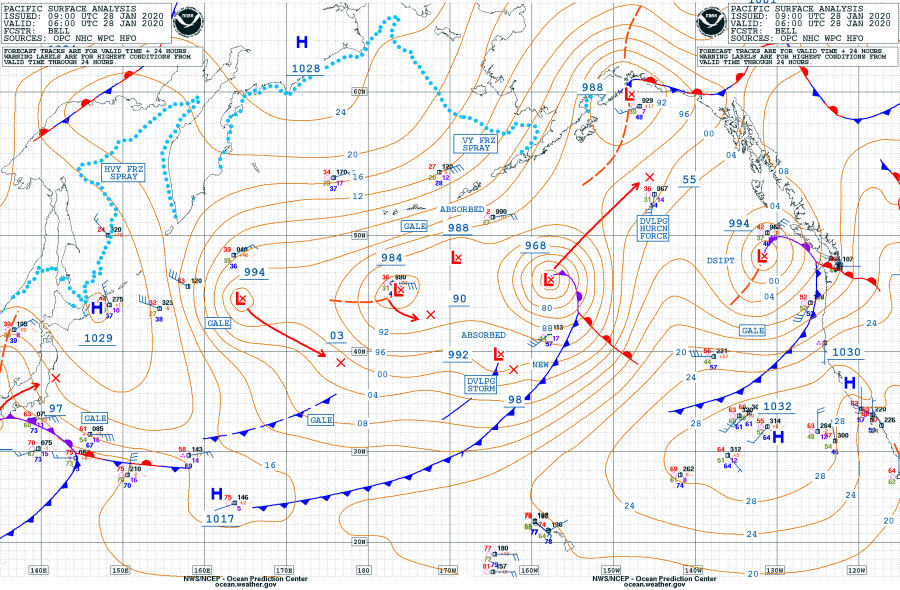 Here is the 6-hour pressure data since the system formed yesterday morning. Rapid intensification is underway since 00 UTC today and continues. Likely for another 6-12 hours. Models are hinting it will reach around 955 mbar by 18 UTC today, Jan 28th.

Satellite imagery is actually as expected, beyond exceptional. Here are the latest GOES-W scans in various satellite channels: 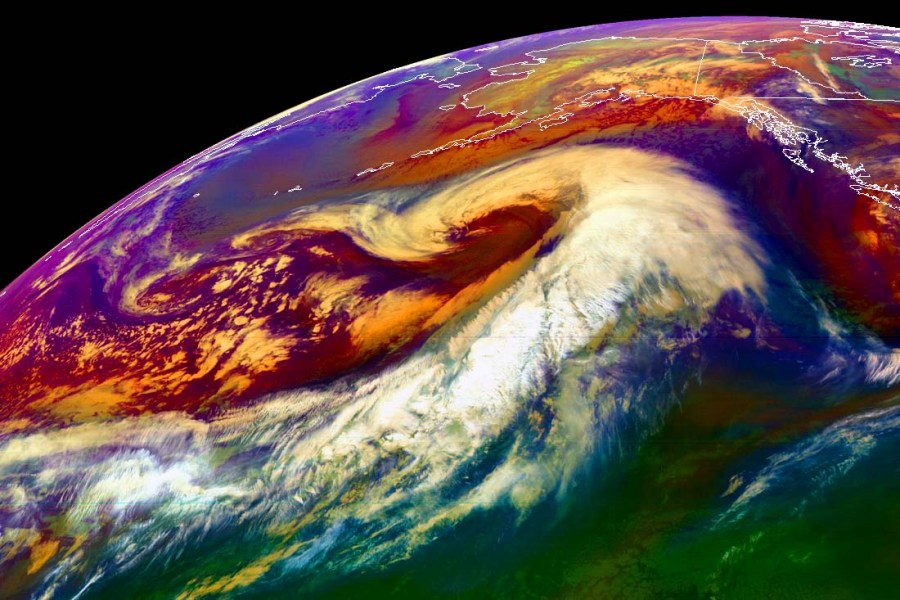 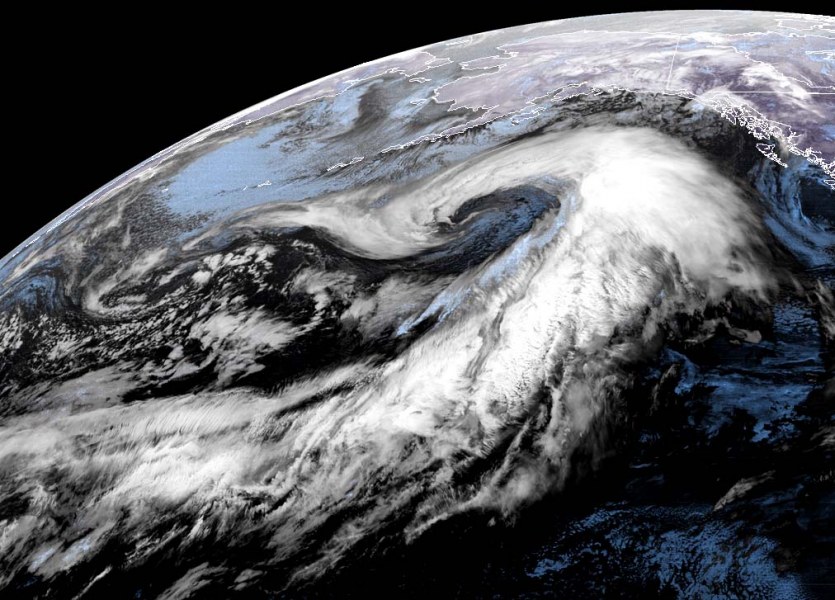 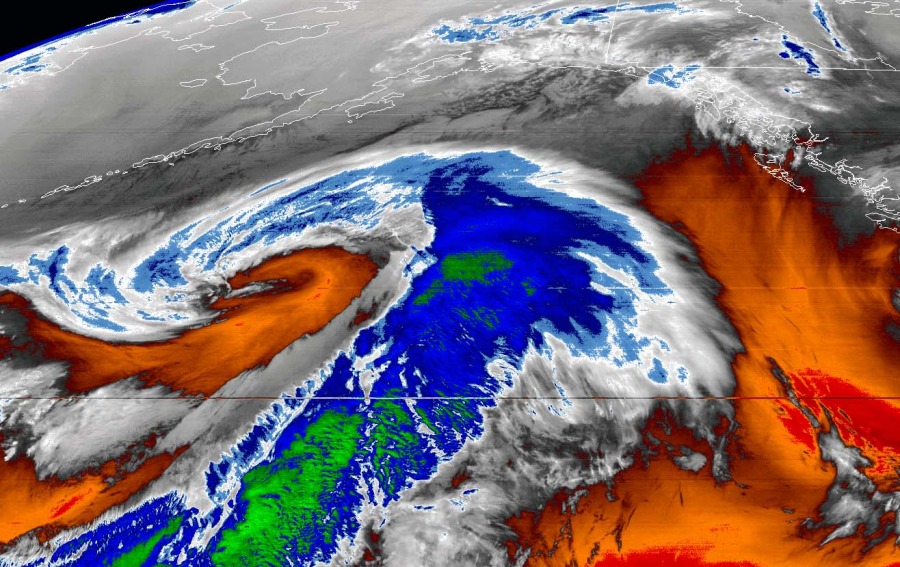 Water vapor satellite animation of explosive cyclogenesis in the North Pacific today. The system will deliver a violent winter storm into the south and southeast Alaska tomorrow! Animation by NOAA pic.twitter.com/ODiXvvAsaz

Close-up view of the core: 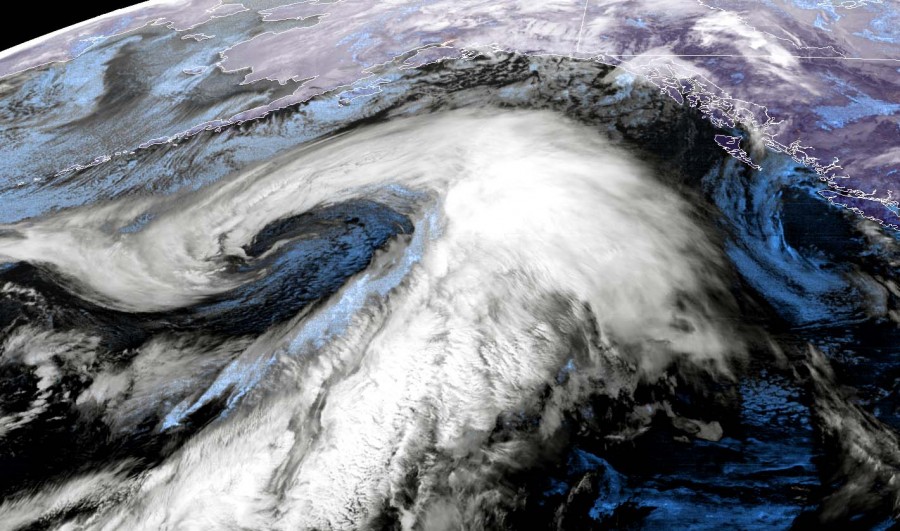 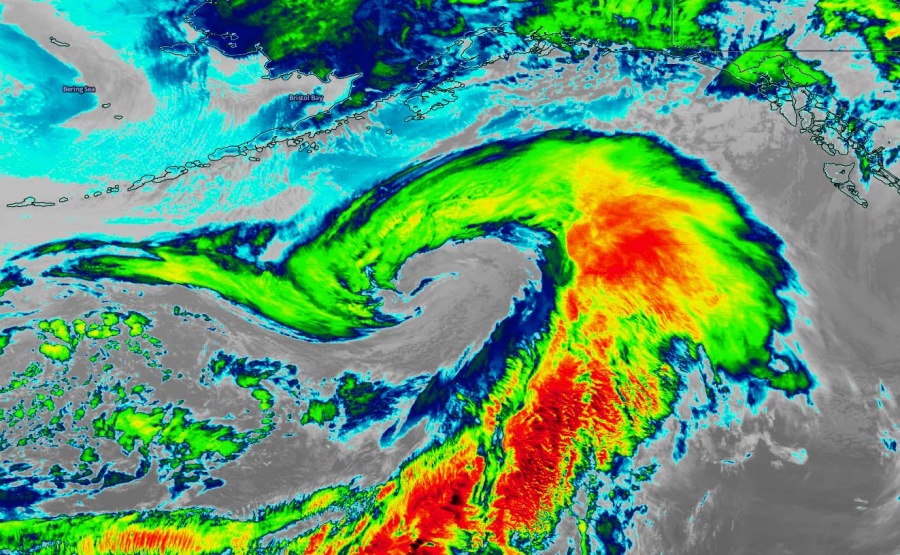 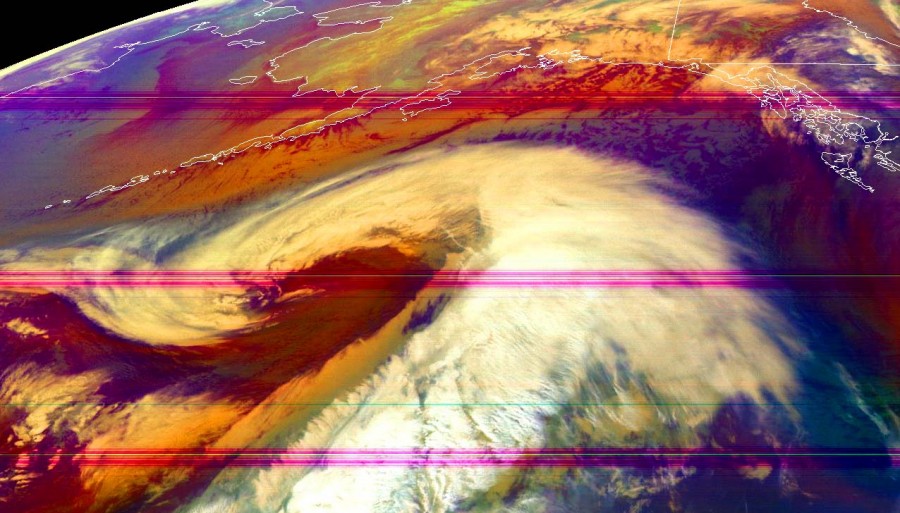 6-hour sequence of the very large and deep cyclone, gradually moving into the Gulf of Alaska tonight while occluding, its center slowly curves northwestwards and slows down along the Kenai peninsula tomorrow. 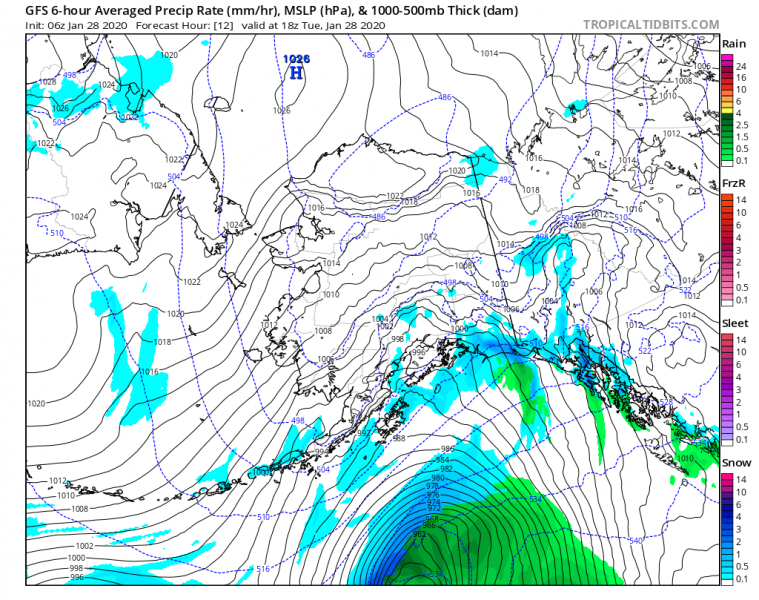 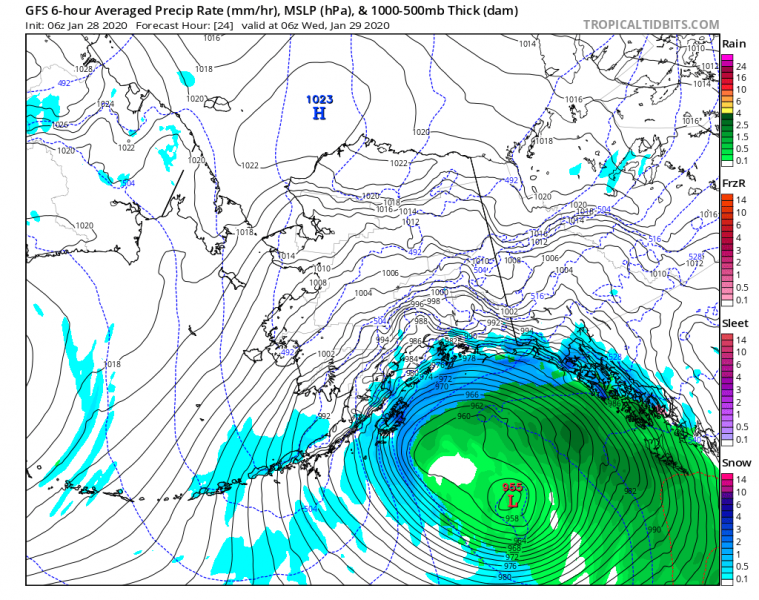 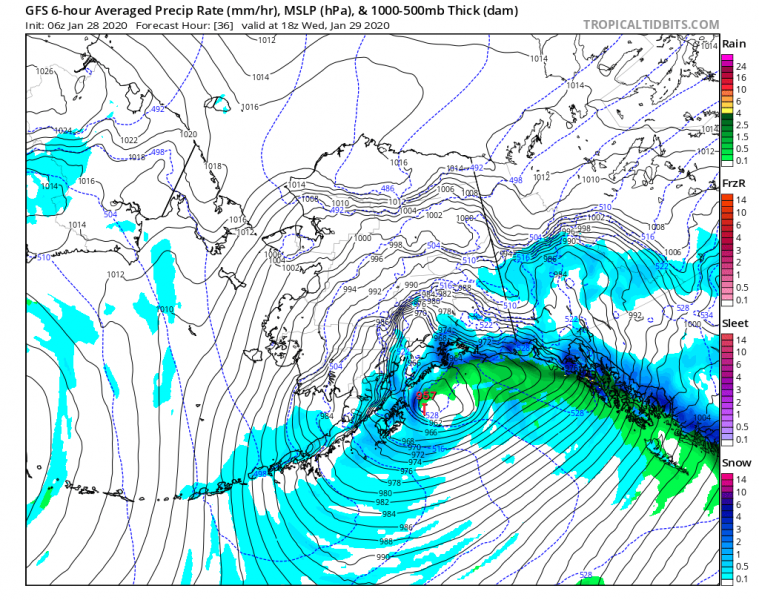 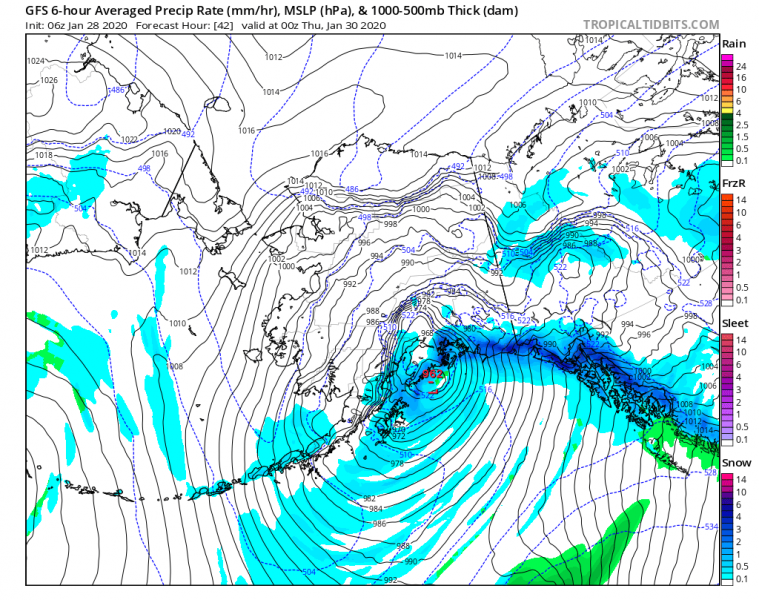 Another intense surface cyclone is also expected to form to the south of this main cyclone on Wednesday’s night, rapidly moving into southeast Alaska with intense windstorm and additional heavy rainfall and intense snowfall further inland. 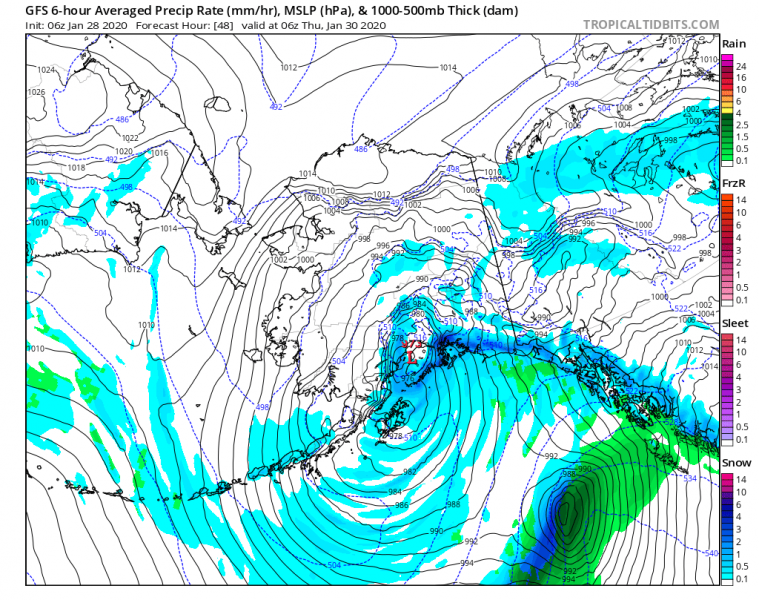 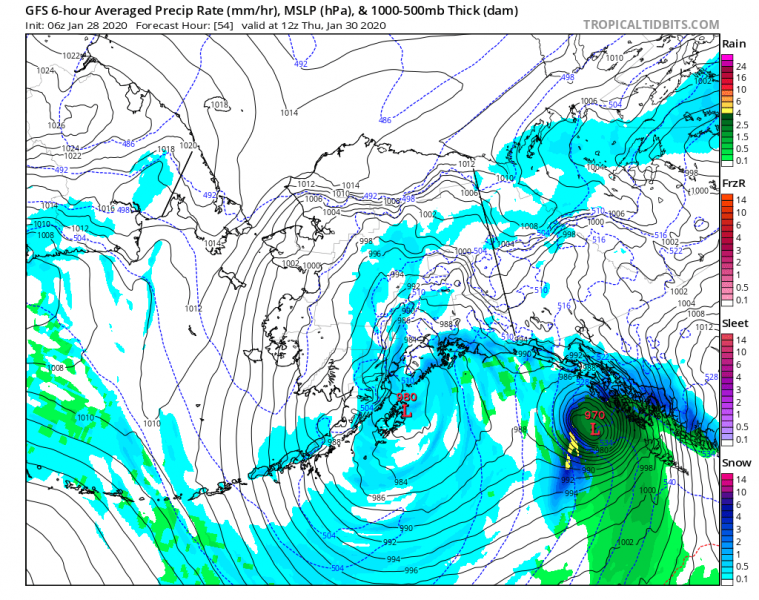 Forecast models are aligned, indicating an intense windstorm will develop over the North Pacific today and tonight, gradually spreading into south-southeast Alaska with near hurricane-force winds. A broad area affected with such violent winds will create significant wave heights in excess of 40 ft ( = 12 meters), slightly lower at the coast but still dangerous! 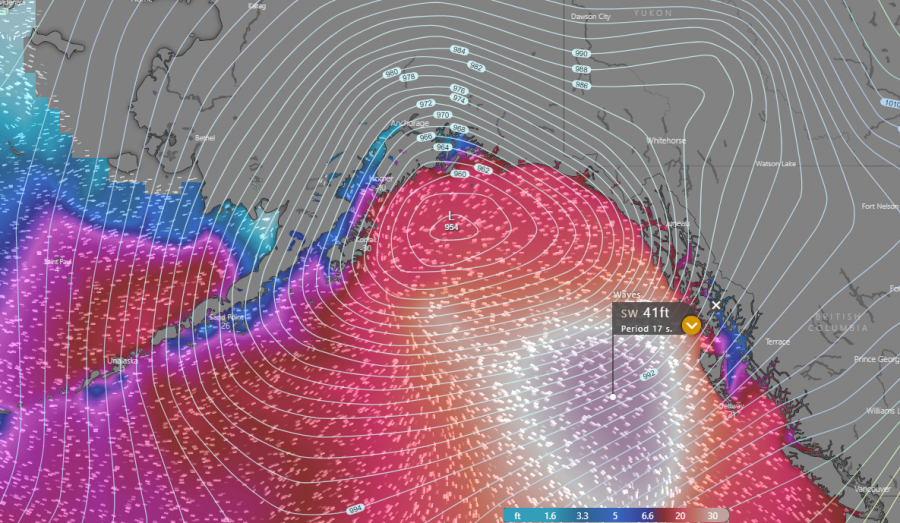 Read the primary forecast discussion below: