Nice Fall weather, when we are approaching the winter season 2022-23, will be quickly undermined by an intense disturbance that will affect the whole Mediterranean and the Alps especially, Tuesday 22nd. The formation of a deep low on the lee side of the Alps right on the Adriatic Sea will first bring strong sirocco winds, soon replaced by a short but intense event of cold Bora with gusts blowing up to 120 km/h. Intense precipitation during this winter storm is expected with snow reaching the plains of Austria and Slovenia, and the alpine valley floors of the Alps. 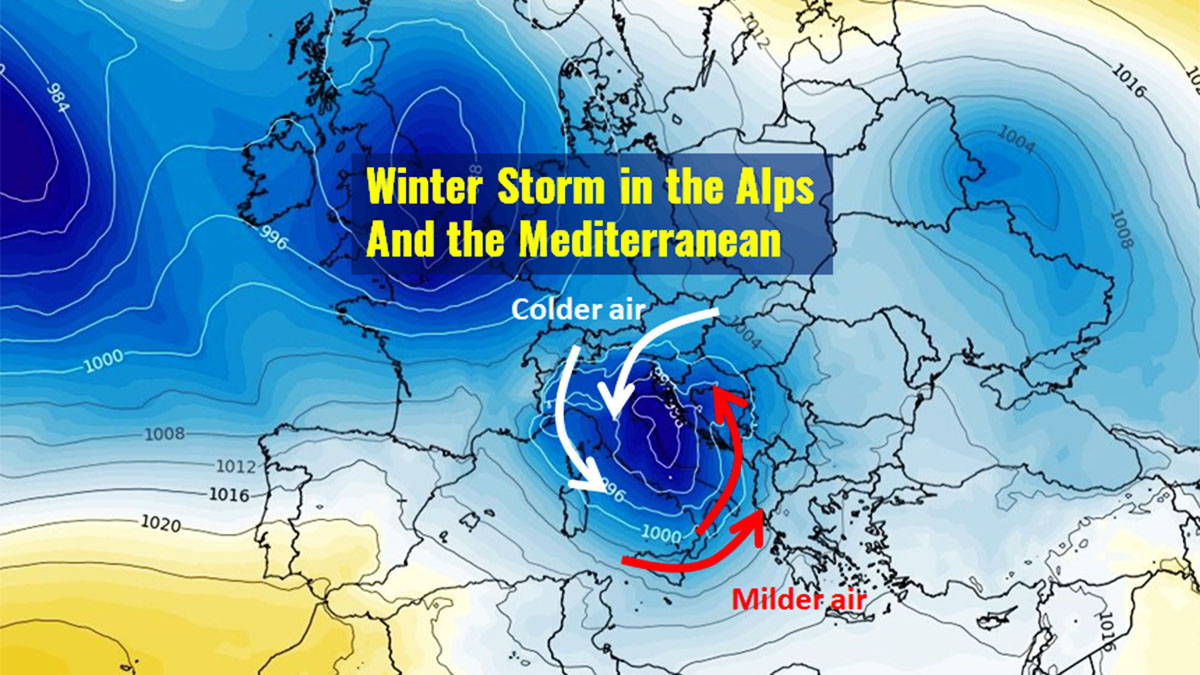 The wet and unstable Atlantic flow affecting Europe for a few weeks now seems to suggest a final, incisive thrust with a winter storm and a lot of snow in the Alps. A rather regular series of fronts produced moderate and discontinuous precipitation up to now, with snow occurring only at high elevations, more typical for the months of September-October.

The winds aloft at the geopotential height of 300 hPa (around 9000 meters) highlight the position of the jet stream intruding the Mediterranean basin with an evident loop, as forecasted at midnight today, Monday 21. 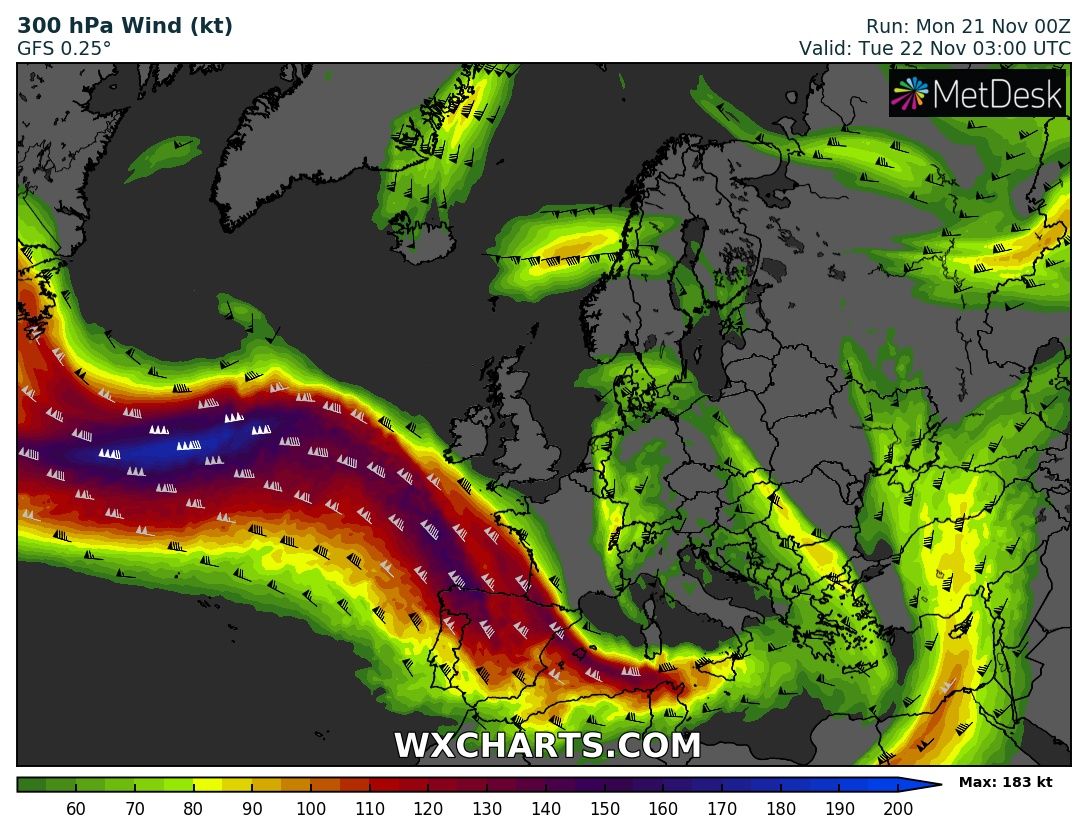 Within this “highway” of winds blowing aloft, several moderate fronts and lows have been sent towards the Alps by the anticlockwise rotation and west-to-east motion of the Icelandic low.

In the next few hours, however, more intense currents will be able to generate a Mediterranean low that will place its center on the ground between the middle and upper Adriatic Sea. Geopotential lows aloft will instead be placed right in the center of the Italian peninsula. A perfect mix for a powerful winter storm over these areas with a lot of snow forecasted for the whole Alps. 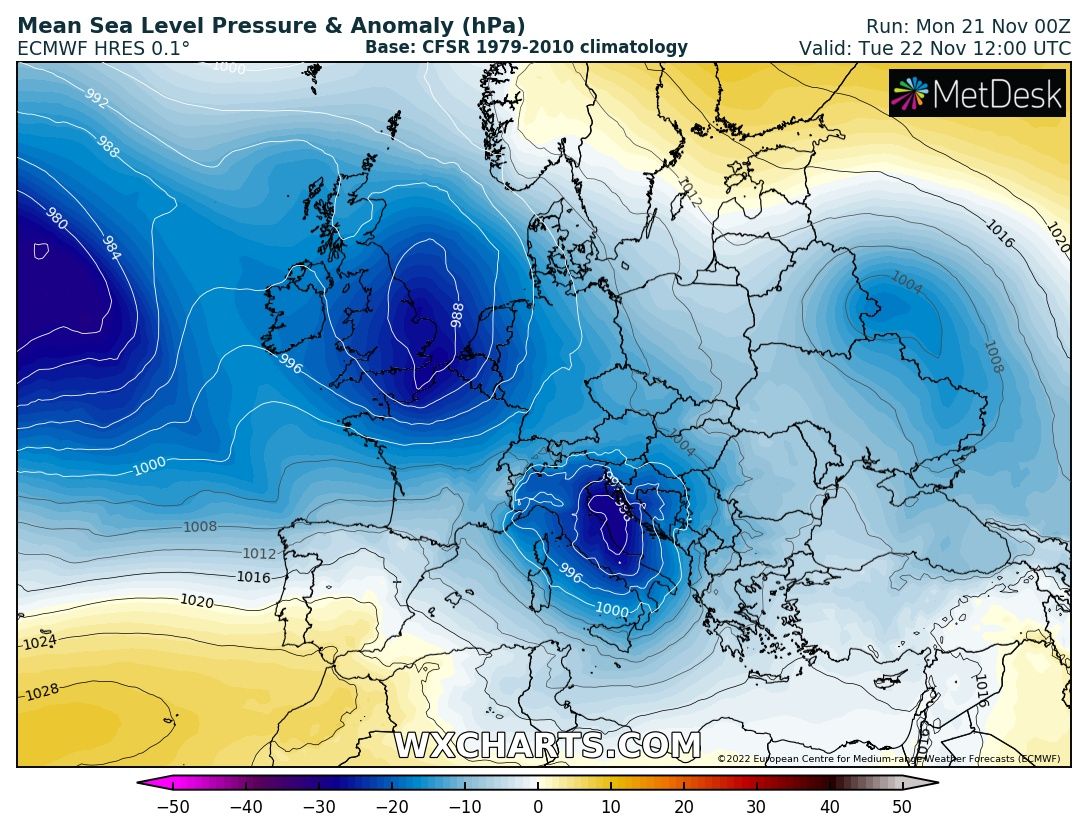 In the first phase, mild Sirocco winds from the south-east will be particularly intense and able to produce storm surges on the northern coasts of the Adriatic, more exposed to fetch, i.e. to the open sea surface within which the generation of wave motion induced by a wind that acts with constant direction and intensity occurs.

Waves height on the shoreline could be up to 2.5 meters high in the area between the lagoons of Venice and Grado-Lignano, decreasing then gradually proceeding eastwards thanks to the land protection of the Istrian Peninsula. Offshore, the wave height will easily exceed 4 meters, especially in front of the Istrian coasts.

After this short phase, cold air will start flowing both aloft and close to the ground surface with increasingly powerful winds from East and North-East called Bora, locally Burja (Slovenian) or Bura (Croatian). The winter storm will start developing though.

Bora wind blows from ENE, which, along the eastern Adriatic coast, means from the land to the sea. It is mostly induced by orography and gains strength and power as it cascades down the mountainsides before hitting the water, fanning out and causing a mess of the sea. This is a typical situation in these areas during a winter storm.

The intensity of the air jet Tuesday 22 will try to bridge the very deep low of 980 or less hectopascal in the Adriatic Tuesday 22, producing brutal Bora winds up to 120-140 km/h locally. 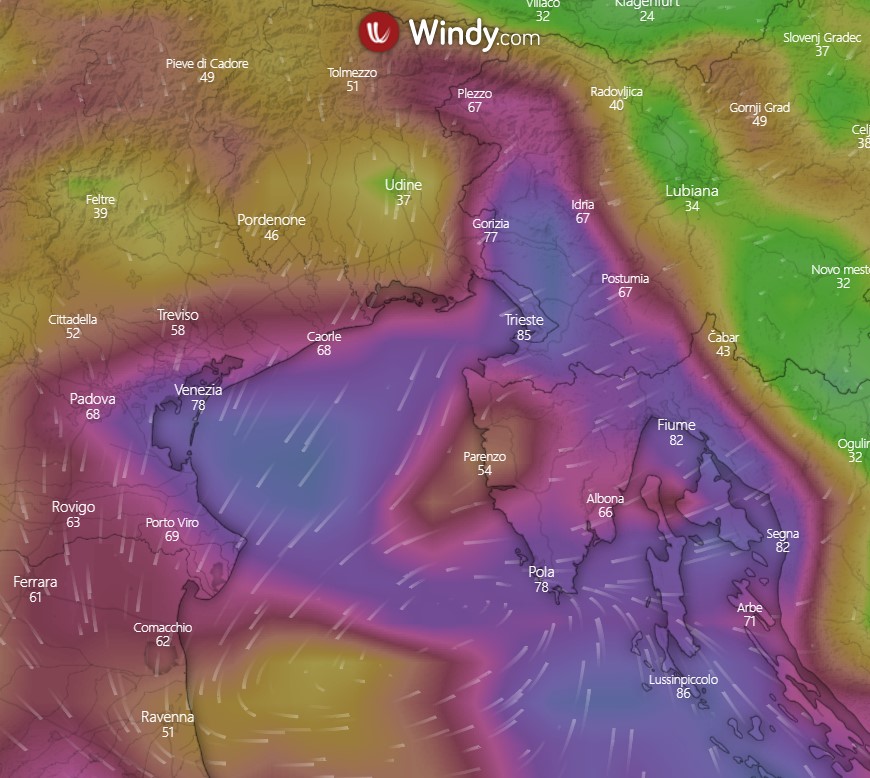 Following this rapidly developing weather pattern, in the upcoming days, a high-pressure system seems to interrupt this end-of-the-Fall meteorologically unstable phase of the last few weeks, with more stable weather conditions in a thermal context generally close to the normal climatology for the period. Indeed, this one seems to be the real news nowadays.

Aloft, increasing geopotential values will be linked to the African high, while on the ground a vast high-pressure system will establish over central Europe. At its eastern edge, the high will likely put in motion rather cold air currently present over Eastern Europe towards the Eastern and Dinaric Alps and the Adriatic Sea. 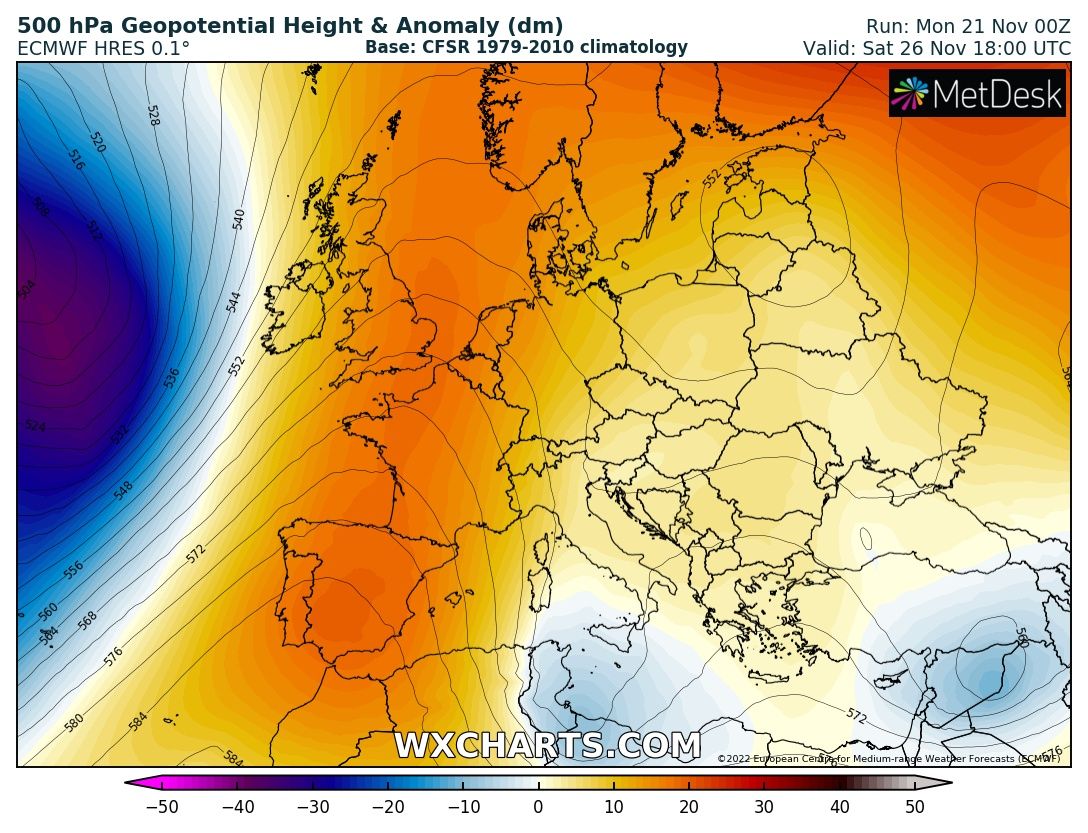 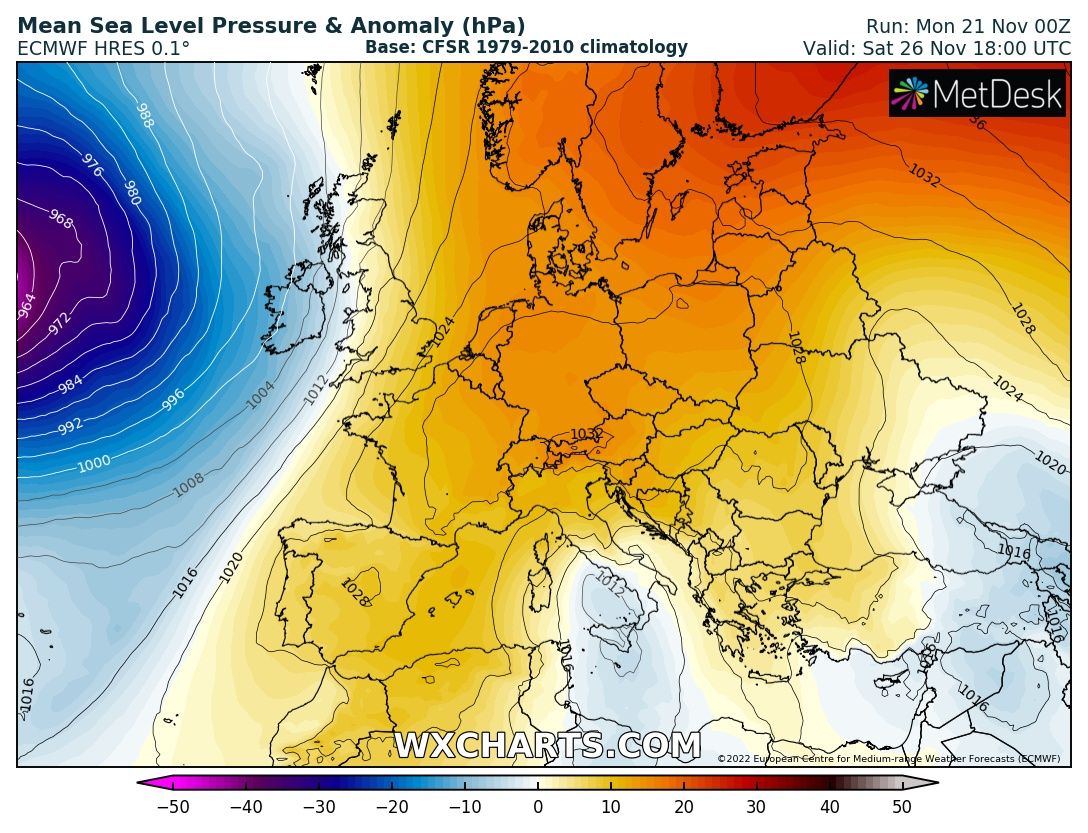 The first cold blast with widespread frost conditions in Eastern Europe with temperatures as low as around -20°C on the ground, was triggered by the Russian-Siberian high which seems more “in shape” than the last years at the beginning of the 2021-2022 cold season.

In the medium to long term, after this winter storm, there is still uncertainty about the evolution of the synoptic patterns with the two global models GFS and ECMWF which propose very different situations. 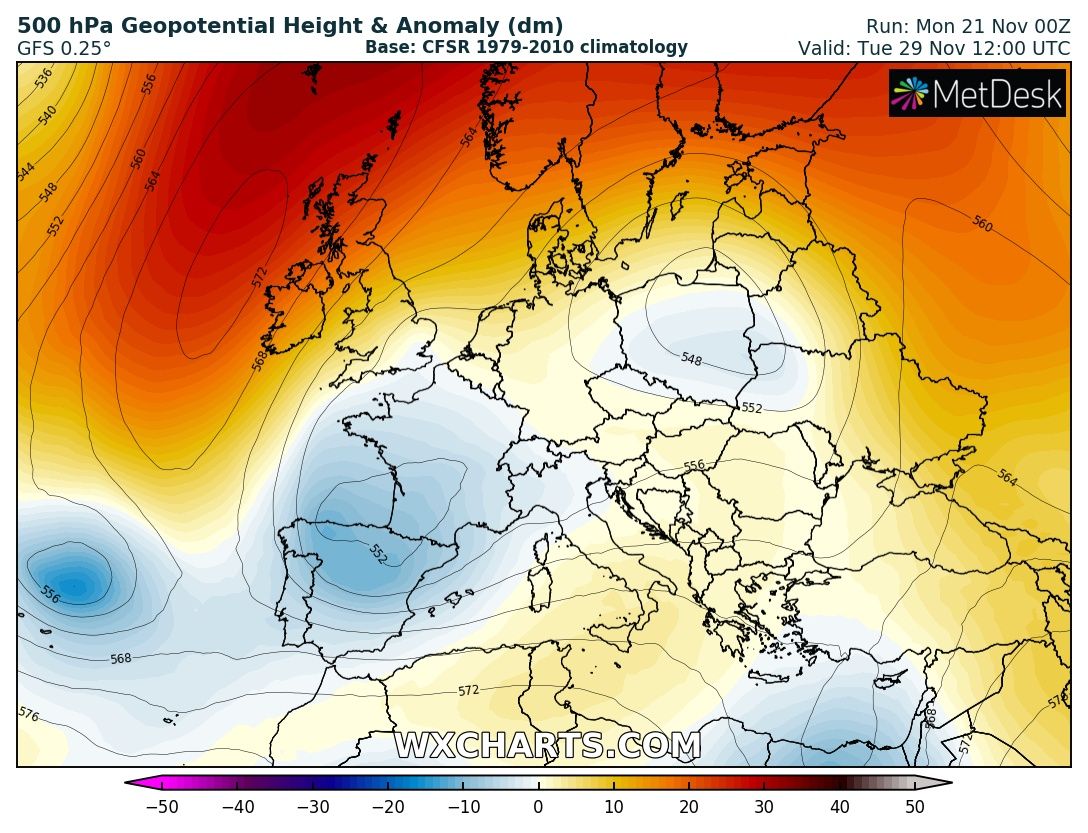 GFS is inclined to a rebirth of cold winter conditions throughout Europe and eventually, the Mediterranean basin thanks to the double action of continental cold flows from the east and arctic maritime from the north (see image above). ECMWF, on the other hand, suggests a reinforcement of the Azores High with the mild Atlantic flow to affect central and northern Europe (see image below). 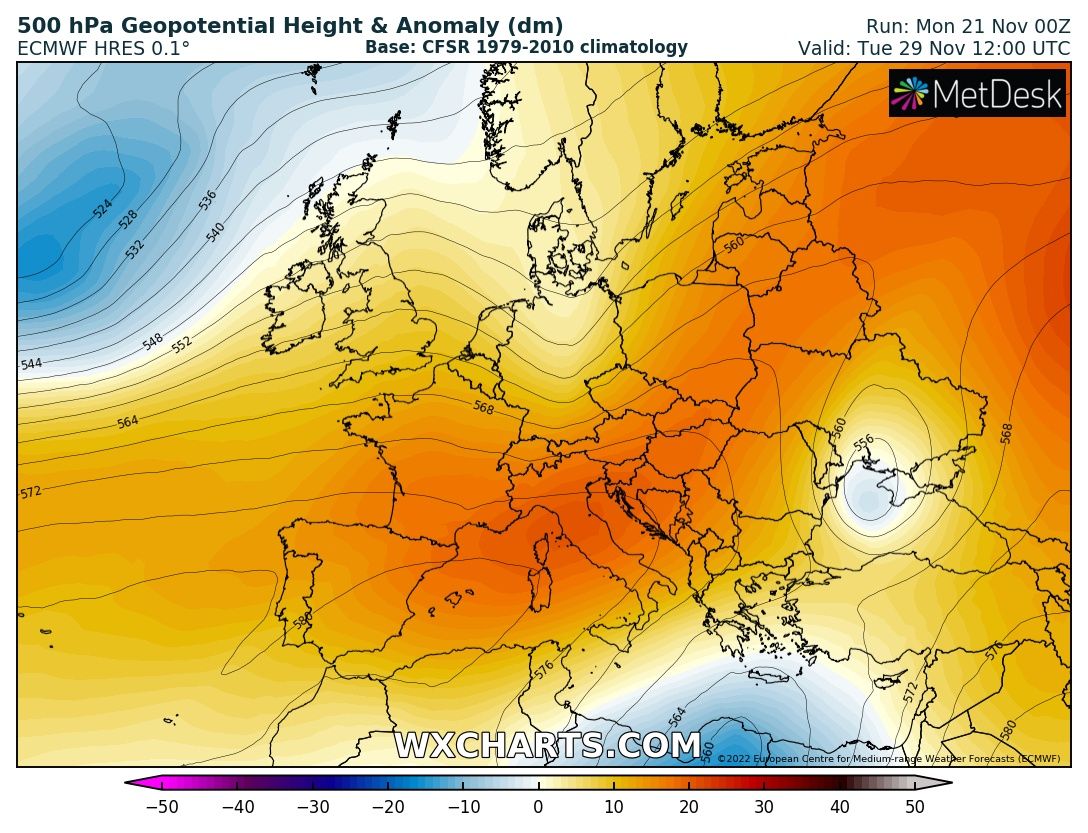 Precipitation will be particularly intense during the winter storm on Tuesday 22 in the eastern sector of the Alps with peaks close to 100 mm in some areas of the Dolomites and the Carnic Prealps especially.

The snow will fall abundant over the whole Alps during this winter storm, up to the plain in Carinthia (Austria) where the temperature aloft will be lower, as well as on the northern Dinaric Alps where, however, in the first phase the more direct intrusion of the milder Sirocco wind will bring snow to fall only above 1200-1400 meters. 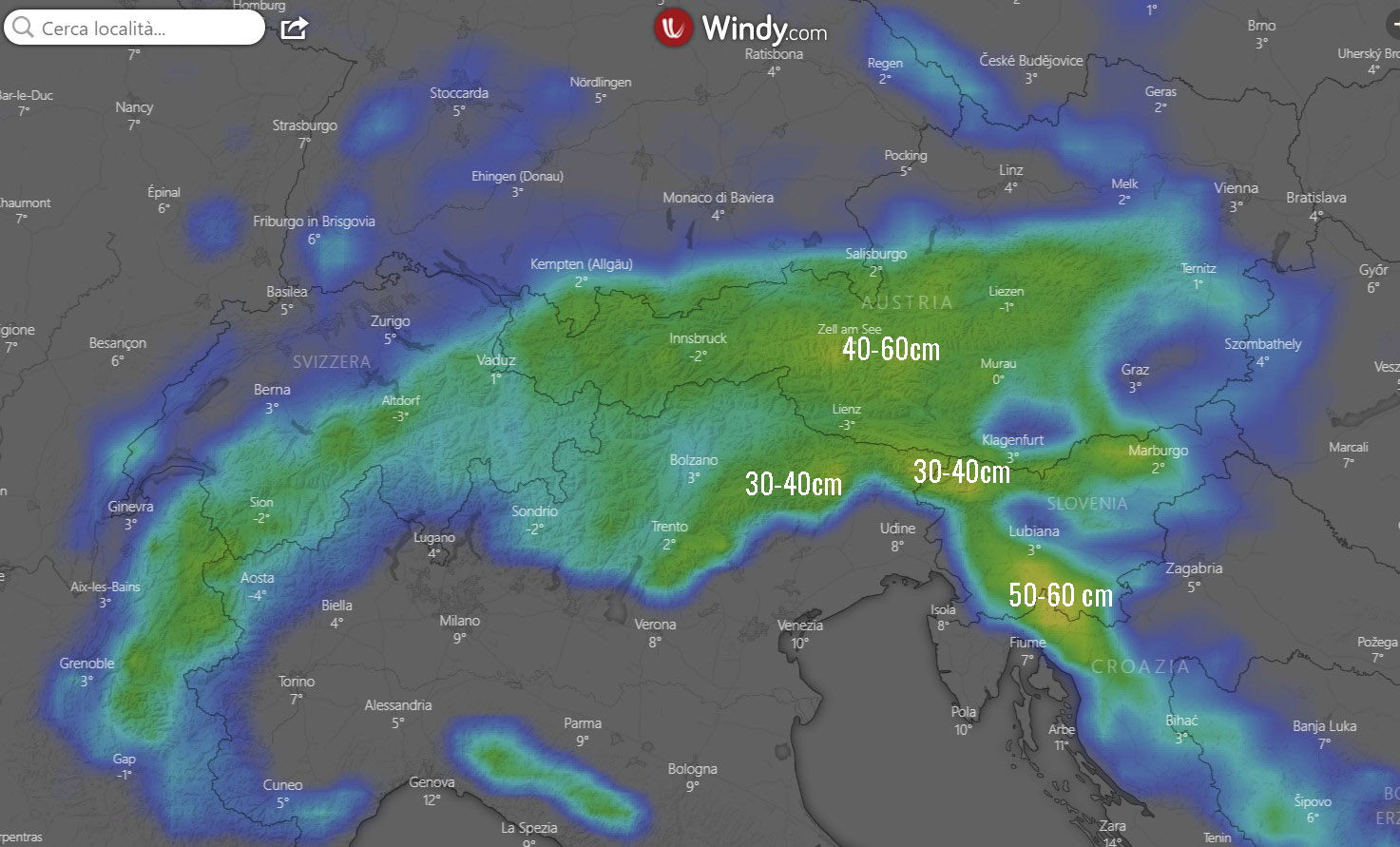 snow forecast expected to fall over the Alps according to ecmwf

Snow forecast sees 10 to 20 cm of new snow in the western Alps, but 30-60 cm starting from 700-900 meters of altitude on the whole eastern Alps are possible. Locally snow will fall at 600 meters as in the case of Valcanale and the town of Tarvisio. In the latter location, the snow may even drop below 600 m in some phases during the more intense precipitation of this winter storm.

Nevertheless, It should be emphasized that temperatures expected aloft at the moment are really at the edge for the occurrence of snow up to the valley floor in the Tarvisio area, especially in the first phase of the winter storm. 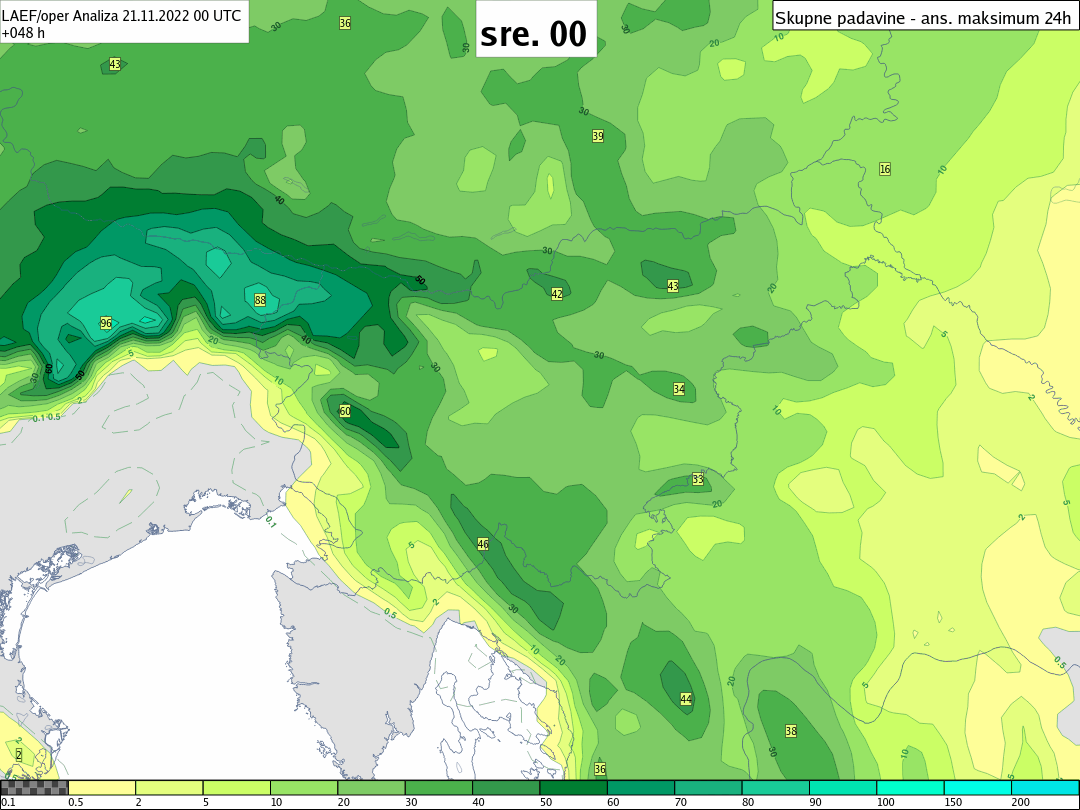 The heaviest snowfalls should occur in the Carnic Prealps, east of the Dolomites, where the greatest amounts of precipitation is expected, although at altitudes 200-300 meters higher than in the Julian Prealps. Above 1800-2000 m in the Carnic Prealps and 1600-1800 m in the Julian Prealps, the most favorable scenarios see quantities of around 90 centimeters of snow in 24 hours, with 50 centimeters in the floor valleys above 600-800 meters. 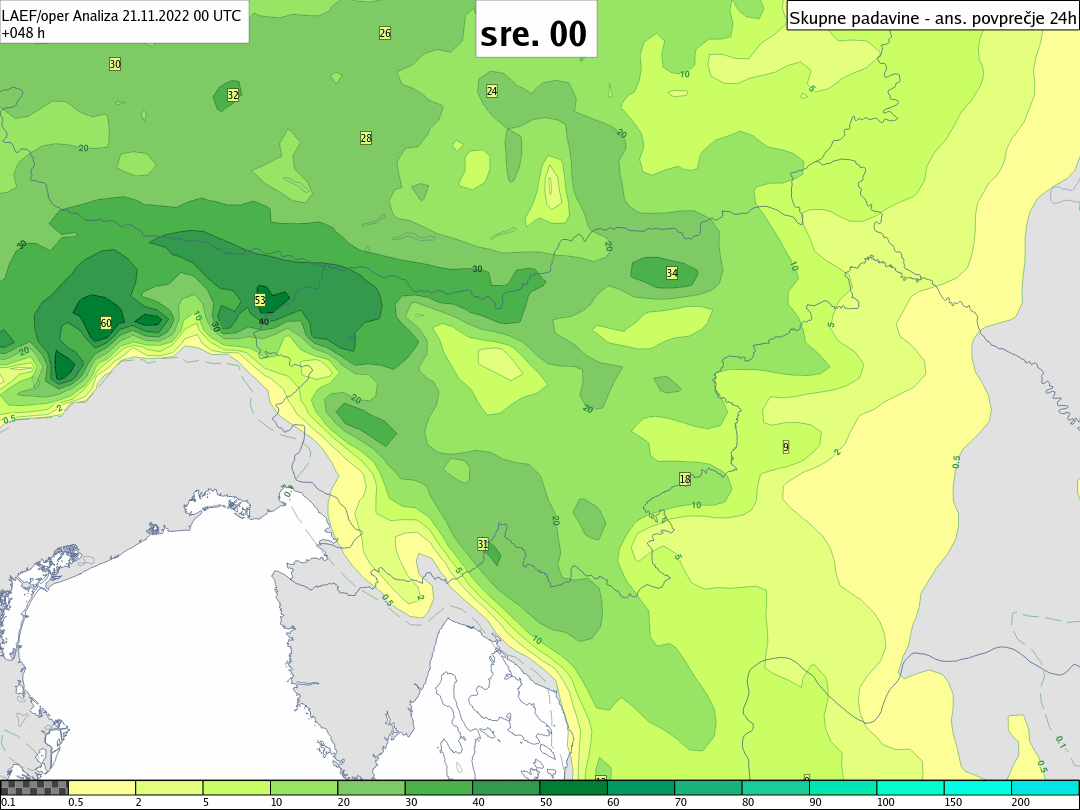 Snow forecast sees between 15 and 40 cm in the Northern Dinaric Alps, with about ten centimeters possible widely on the Slovenian Notraniska and the Inner Karst in the afternoon/ evening of Tuesday, when the occlusion will be right above these areas and the Bora will blow mightily. Dangerous weather conditions bringing frigid temperatures, howling winds, and decreased visibility are forecasted in these areas during this winter storm.

Bora wind will be powerful inland on the Adriatic coasts of Italy, Slovenia, and Croatia, with gusts locally reaching 120-140 km/h and leading to powerful blizzards above 700-900 meters. A large volume of snow will be blown around in the air and near the ground, decreasing visibility. The winter storm will mature towards the afternoon in these areas when colder air will flow from the east and the intensity of precipitation will be the highest. 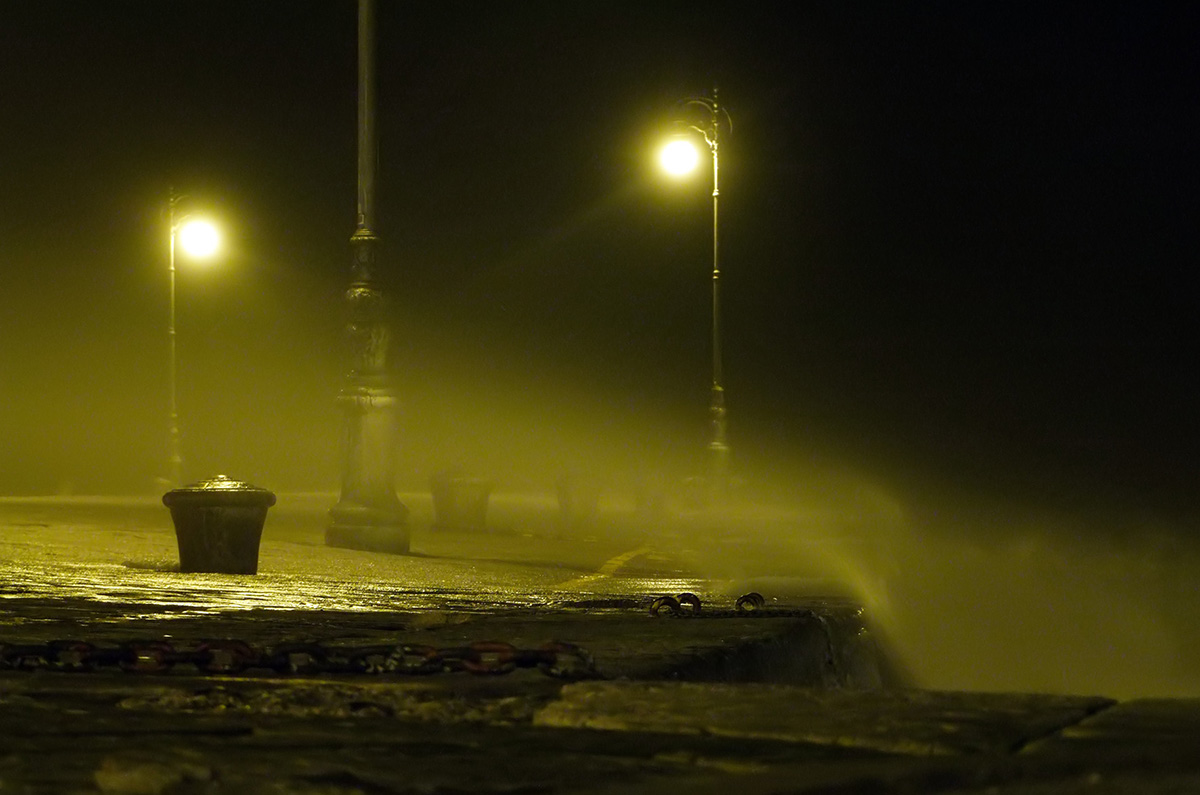 Along the eastern coast, the winter storm will produce a mix of heavy rain and strong wind for several hours. Nevertheless, It should be emphasized in this case that some scenarios hypothesize, albeit with very low probability (10-20%), phases of wet snow even on the highest areas of the coastal Karst above 400-500 m of altitude between the afternoon and the evening of Tuesday.

By Wednesday morning, November 23rd, the winter storm will be over.

Winter Forecast 2022/2023 – November Update: Cold ENSO phase peaks, with its growing weather influence as we head for the start of the Winter Season