A lot of snow will fall in Austria and Switzerland early this week, then in southwest Norway in the second half. A quasi-stationary Rossby wave keeps influencing the weather pattern over Europe, but the Westerlies will return to Europe soon. 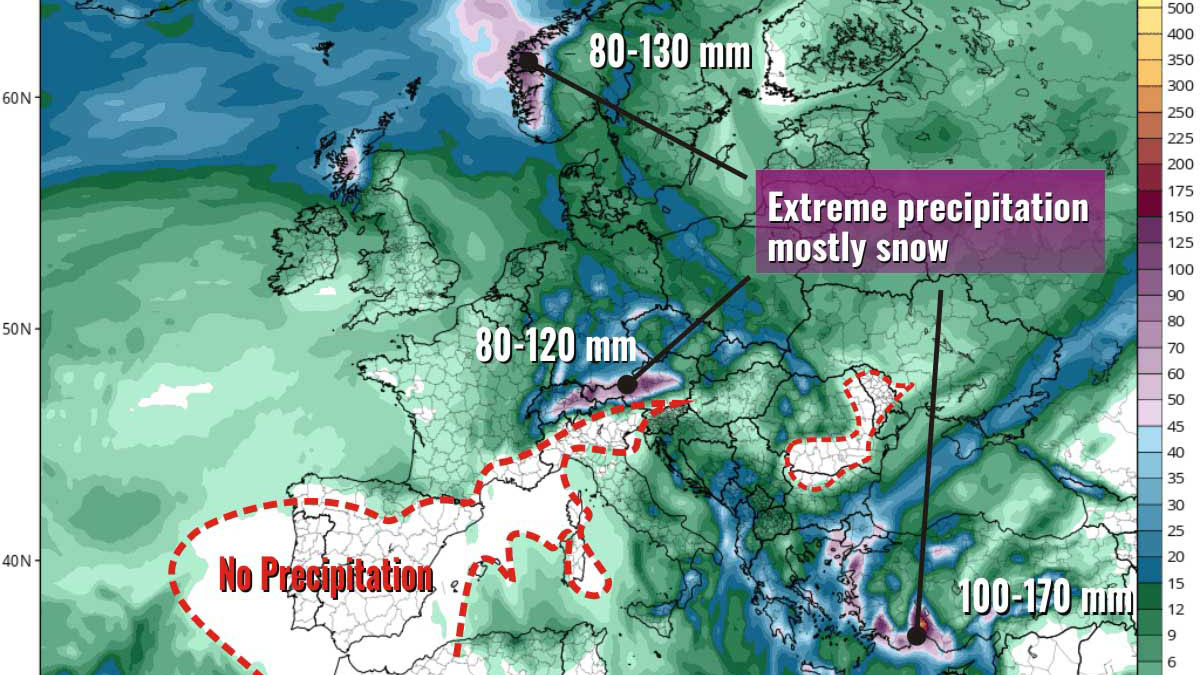 The two main global meteorological models are rather in tune with the synoptic evolution of the upcoming week, for almost the entire period covered by this analysis. A dynamic blocking High persists with ground values above 1040 hPa at its center between 48 degrees North and 25 degrees West, west of Ireland.

This location is somewhat anomalous and can be seen from the following geopotential anomalies map which highlights the two imposing and antithetical baric structures, with central Europe, the Alps, and Italy right on the border. 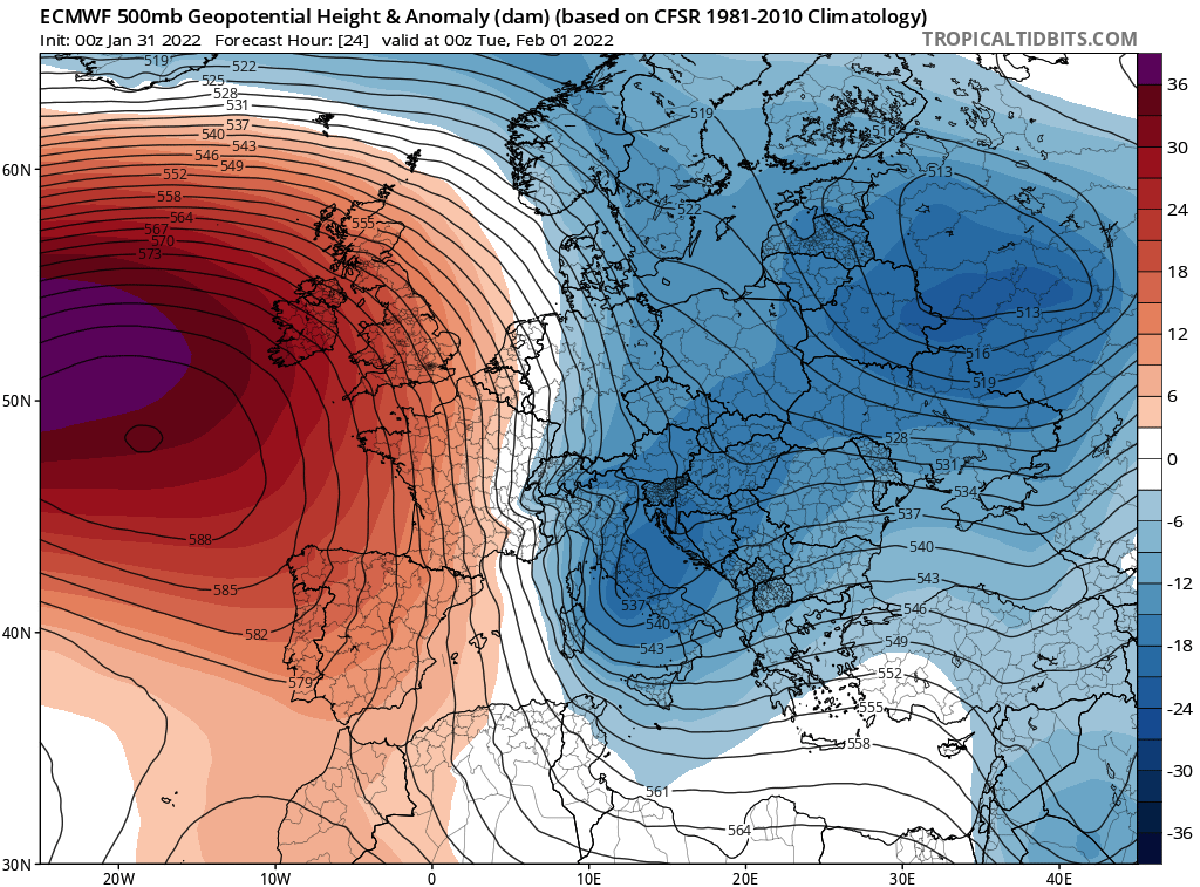 This configuration promotes the onset of rather cool, strong, and wet northerly winds across most of Europe. Such flow, virtually departed from the coasts of Labrador, head first towards Greenland and Iceland to circumvent the imposing high-pressure structure, and then abruptly turns over the British Isles heading towards the northern coasts of Europe.

In the last 48 hours, hurricane-force winds affected Scotland with winds gusts that, on some peaks of the Cairngorms and the Highlands, exceeded 200 km/h. Heavy storms are also reported in these hours on the Dutch coasts. These very wet winds are now and will be, headed towards the Alps in the coming days. 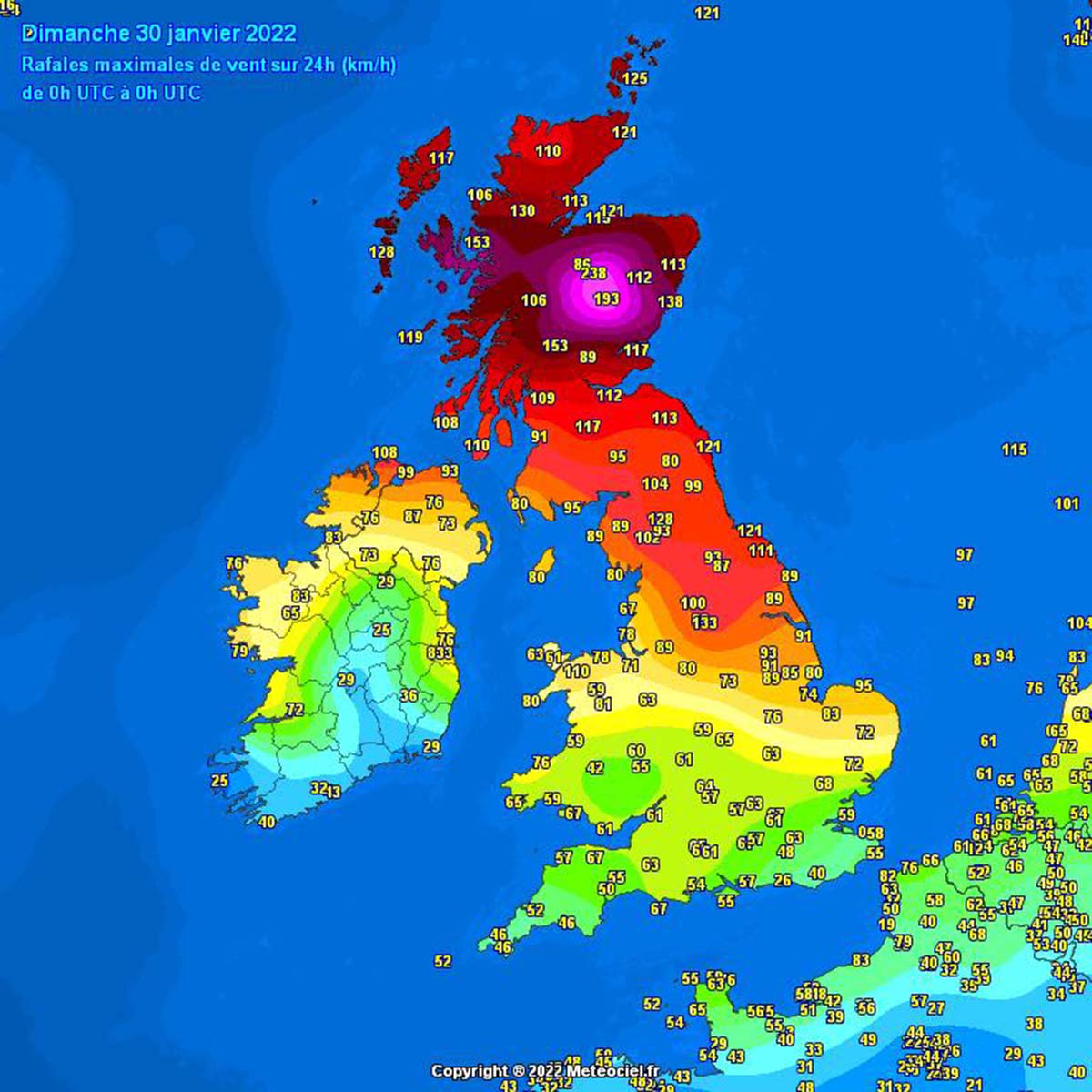 This configuration will be able to bring intense orographic precipitation (stau) on the northern side of the Alps. The southern side of the Alps will be on the lee side with no precipitation at all and föhn conditions. This configuration is induced by the eastern descending branch of a quasi-stationary Rossby wave that orthogonally invests the Alpine chain, as is clearly evident by the following animation.

Evolution of the jet stream from January 31st to February 6th, 2022, by ECMWF

As you can see in the image below, the first part of the week is characterized by a powerful positive geopotential anomaly both at the ground and at 500 hPa, while an opposite negative anomaly is present over western Russia, Italy, and the Balkans.

In the second part of the week, we will probably see a rapid pattern change. A drop in the geopotential anomaly in the Atlantic will likely shift the High towards South and East affecting more directly the Mediterranean basin. This means the westerlies will have an open road to UK and Scandinavia and there will be a chance here for frequent and intense precipitation.

After a decent temperature drop in the upcoming days, in the second part of the week, there is an increased chance for milder temperature over Portugal, Spain, France, and the Western Mediterranean. Towards the next weekend, westerlies will likely bring again cooler and wetter air masses towards the UK and central Europe. In the image below the ECMWF model shows the 850 hPa temperature anomalies forecasted for February 3 (left) and February 5 (right)

Intense orographic precipitation due to the stau effect will take place first in Austria, Liechtenstein, and Switzerland early this week. As it often happens in these cases, the Thickest snow on the ground will be likely accumulated in Tyrol at elevations above 600-1000 m asl. Locally, around 130 cm are forecasted to fall in this area as reported in the map below, source windy thanks to ECMWF analysis.

There is a high risk of heavy snowdrifts in most of these areas as well on the Height range > 800 m due to strong gusts with fresh snow and loose snow cover. People there need to be aware of severe conditions. Roads may be impassable and the rail traffic may be disrupted.

Difficult conditions are forecasted for southern Germany too, where a red alert for snow and ice has been issued for Berchtesgadener Land, Traunstein, Stadt Rosenheim, Miesbach, Bad Tölz-Wolfratshausen, Garmisch-Partenkirchen, Weilheim-Schongau, Ostallgäu, Oberallgäu and Lindau (Bodensee) as well as in Ortenaukreis 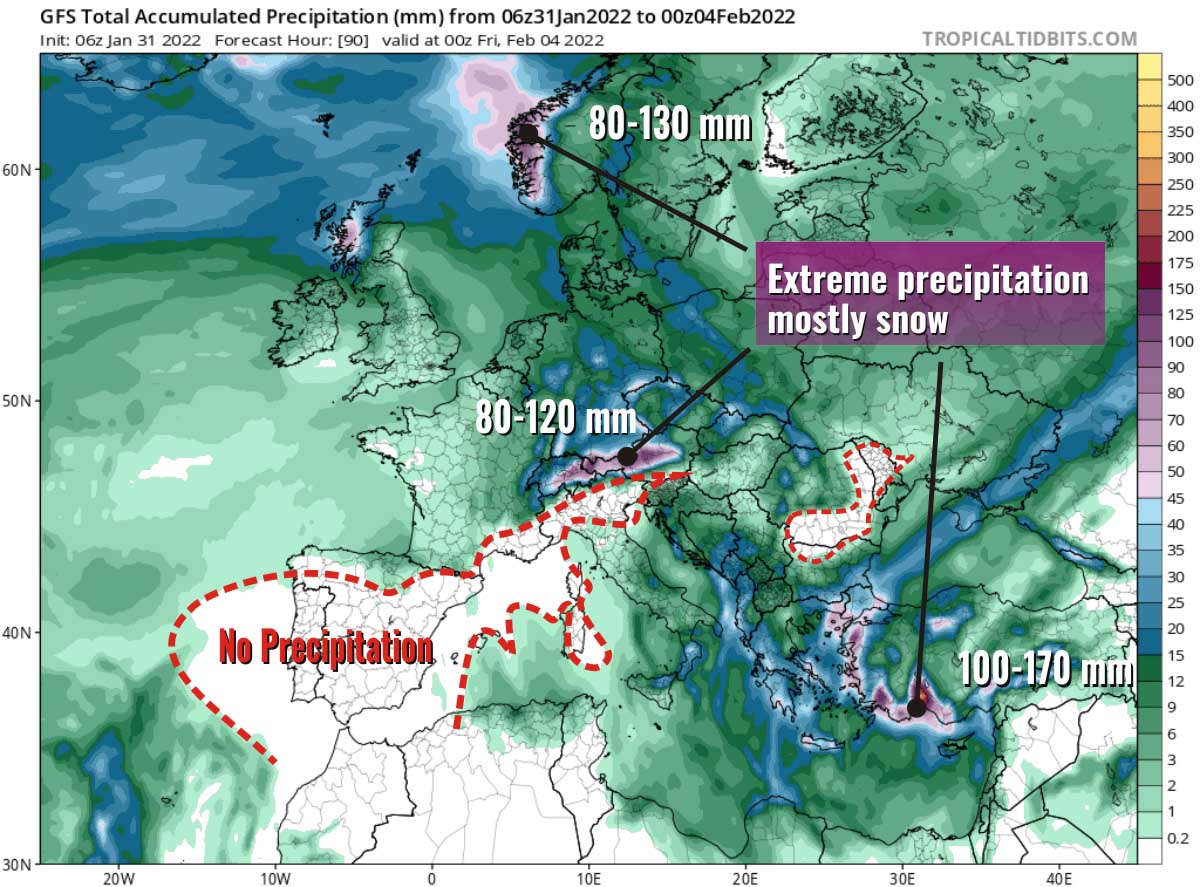 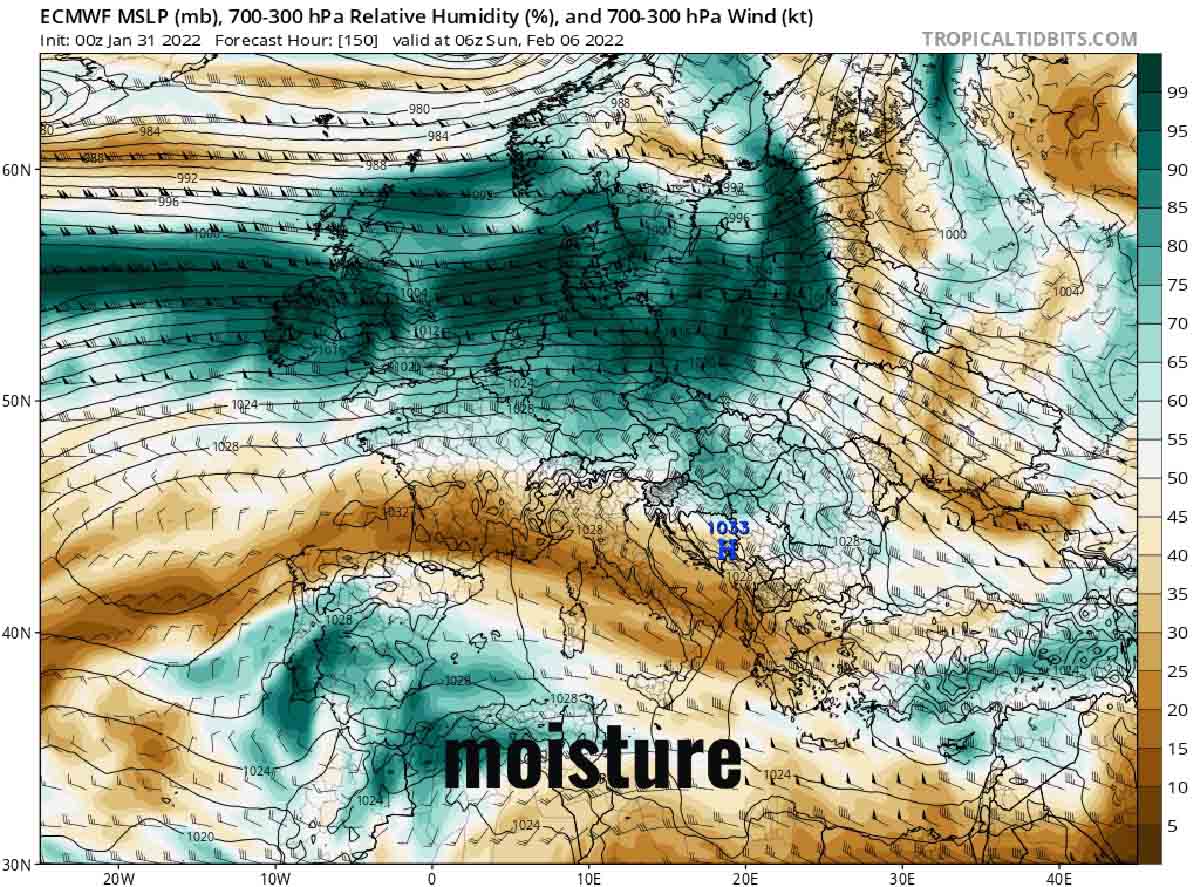 Precipitation will increase over western Scotland in the second part of the week when the Westerlies will have free road thanks to the disruption of the High in central Europe. Have a look at the map above showing Relative Humidity between 700-300 hPa on Sunday 6th.

Heavy rain and snow will affect then southern Norway and the UK. On the west coast and the southern Norvegian Alps, up to 250 mm of water equivalent are expected with locally more than 220 cm new fresh snow on the ground. 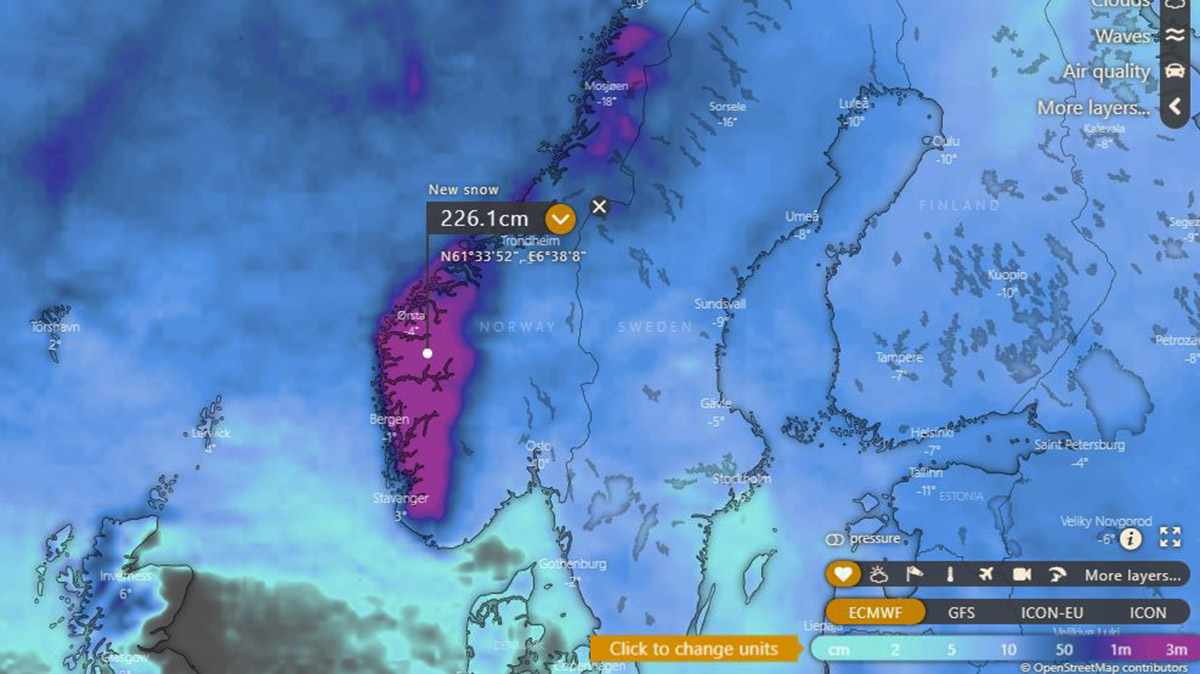 QUITE SOME SNOW FOR PART OF EUROPE THIS WEEK

As we described above, the northern Alps and southwestern Norway will see a large accumulation of snow in the upcoming days. In the map below source GFS, we can see the accumulated positive snow depth change. As we discussed before, more than 100 cm of new snow is easily expected in parts of Austria, Switzerland, and Norway. 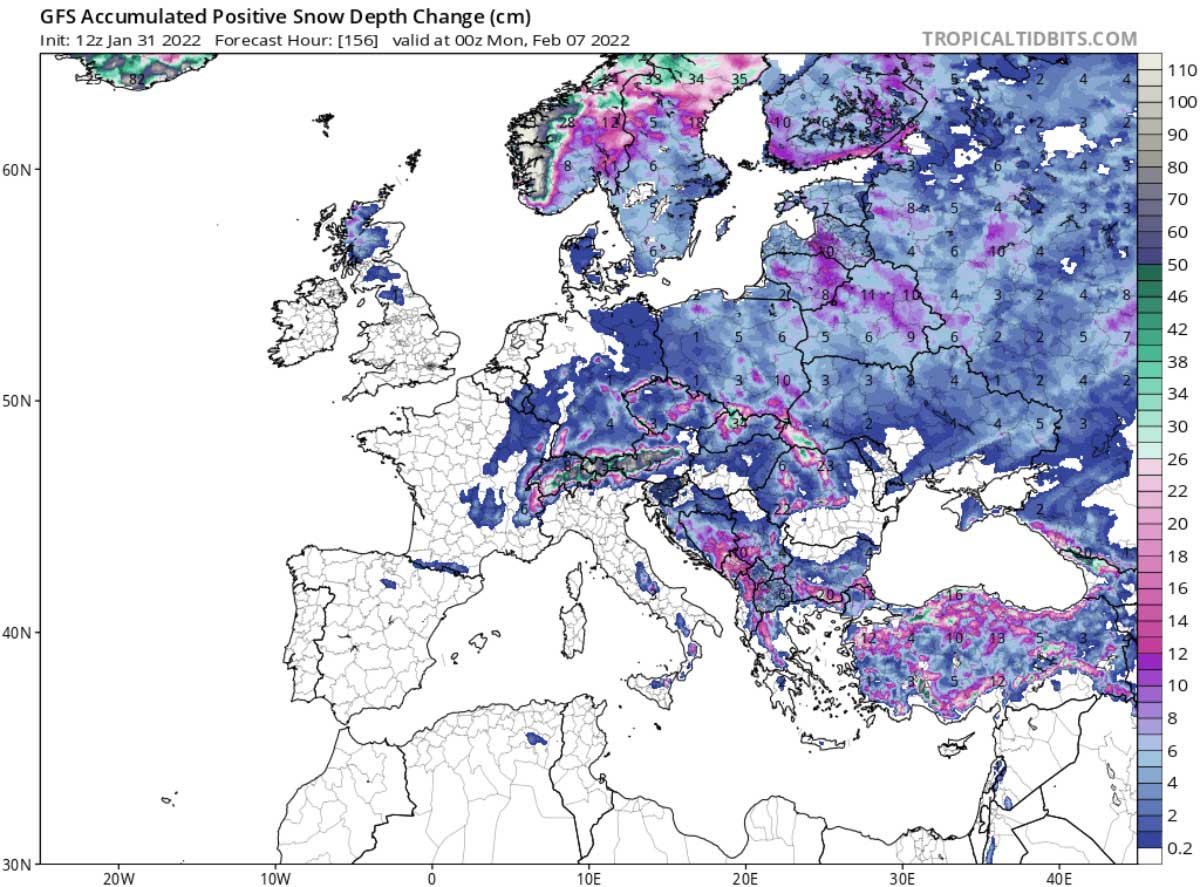 More east, there will be a chance for new snow accumulation even at lower elevations. This is the case of Poland and the Baltic Republics where 2 to 15 cm is expected. Weak to moderate snowfalls will interest the Apennines in Italy with the Gran Sasso-Corno Grande in the Abruzzo region receiving about 20 cm of new snow. The Etna volcano in Sicily will

In the image below provided by NOAA’s Climate Prediction Center, the NAO index seems to stay positive until at least half February. This circumstance further suggests that the blocking High will somehow keep influencing the weather types over Europe. At present conditions, there is no sign of an imminent change in the NAO index.

Afterward, taking a look at the CFSv2 climate model, it is disturbing to see a persistent anomaly of the geopotential always in the same position in the month of February. This anomaly seems to shift its axis further east during the month of March with greater involvement of the Alpine area and northern Italy which would recursively remain without consistent precipitation.

The comparison between February (left) and March (right) in the next image summarizes what we just described. It should also be said that this configuration forecasted for the month of March, has been proposed by the CFSv2 model for several months now.

Images in this article were provided by Windy.

Groundhog Day Forecast calls for a Dangerous Winter Storm Landon with Historic Snow and Ice for the U.S. as Polar Vortex Lobe does another frigid Arctic blast south this week