A very large winter storm Bella is forecast to bring strong gales and heavy rain to the UK and Ireland tonight into Sunday morning. Winds could reach above 120 km/h (75 mph) in places. Bella then continues south towards the Mediterranean and results in a massive snowstorm over the Alps and western Balkan peninsula on Monday.

The UK Met Office has issued warnings for wind and rain in parts of England, Wales, Northern Ireland, and southern Scotland. The coastal areas will be the most impacted by both winds, gales, and storm surge.

Heavy rain, wind gale warnings are in effect across Ireland today as a winter storm Bella is moving into western Europe from the north.

Winds are expected to reach gale force or strong gale force today and early tonight on coastal waters and on the Irish Sea.

Irish Met Éireann expects that westerly winds could bring gusts to 110 km/h or even higher along with the western and southwestern coastal areas. There is also a risk of coastal flooding along the west coast due to the combination of severe winds, major waves, and storm surge.

According to the weather models, the Met Office expects that 15-25 mm of rain will fall in Wales and southwest England, and up to 40-60 mm over the hilly terrain due to orographic lift resulting in higher accumulations. Heavy rain could locally lead to flooding.

Even more rain, 50-80 mm is possible over the Scottish Highlands.

Here is the video animation of an impressive development of winter storm Bella:

The winter storm then continues further south and east, dominating a large of Europe in the coming days. The cold front will bring some fresh snow into central Europe.

Over the Alps, a massive snowstorm is expected on Monday, resulting in more than a meter of fresh snow by the evening hours.

Huge amounts of snow are also expected along the mountain chain – Dynaric Alps in the western Balkan peninsula. Close to half a meter of snow in western Bosnia and an *extreme* 300+ cm (3 meters!) of fresh snow over the mountains of the southwestern part of the peninsula (east-southeastern Montenegro, northern Albania).

As the model models were predicting earlier this week, a significant pattern change unfolded around Christmas. A very large winter storm Bella is not rapidly strengthening over the Northeast Atlantic and moving towards western Europe.

Its central pressure has already pushed to 965 mbar and continues falling lower this Saturday and tonight. 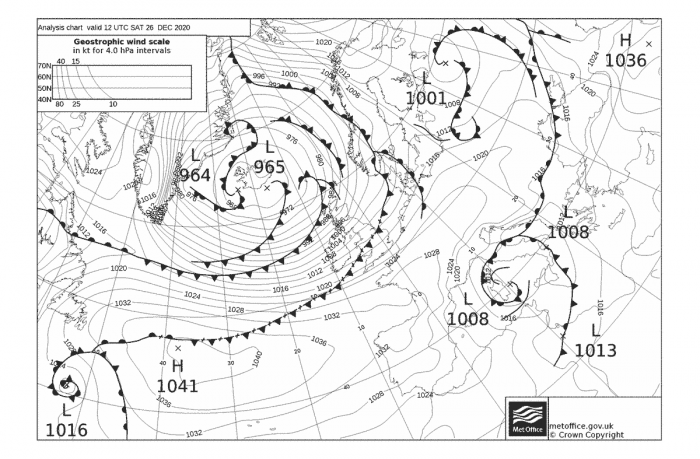 An impressive, textbook Arctic blast is seen behind the front, gradually spreading much colder air mass towards Ireland and the UK. 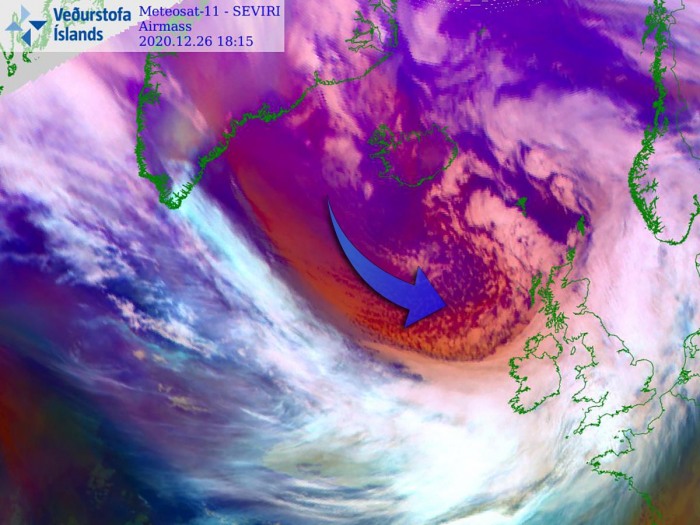 As we can see from the analysis and satellite animation above, the general pattern over Europe has changed. A powerful blocking high upper-level ridge is now dominating a large part of the North Atlantic, with a deep Arctic trough strengthening over northwestern Europe. 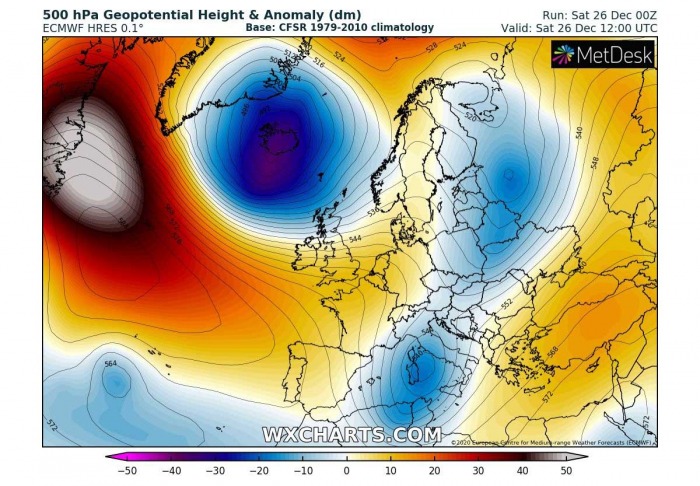 Its associated surface low becomes a very powerful winter storm Bella, deepening its central pressure towards 960s. A high-pressure system over the Azores to its south is weakening over west-southwest Europe ahead of the coming storm. 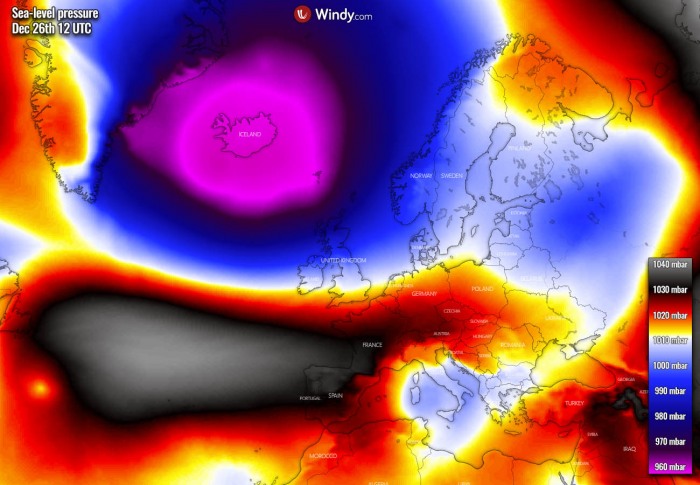 An intense west-northwesterly flow has developed between these two large scale features.

On Sunday, a winter storm Bella continues intensifying while spreading into western Europe, with heavy rain and winds pushed across Ireland, UK France, and Benelux. The upper high to its northwest completely blocks the flow from the west, so Bella introduces a meridional channel flow from north to south.

Looking over the surface mean sea-level pressure forecast for Sunday, storm Bella will dominate a large part of Europe. Centered over the northern UK, Faroes and the North Sea. Storm Bella is expected to peak its intensity on Sunday, with the central pressure between 952 and 955 mbar. 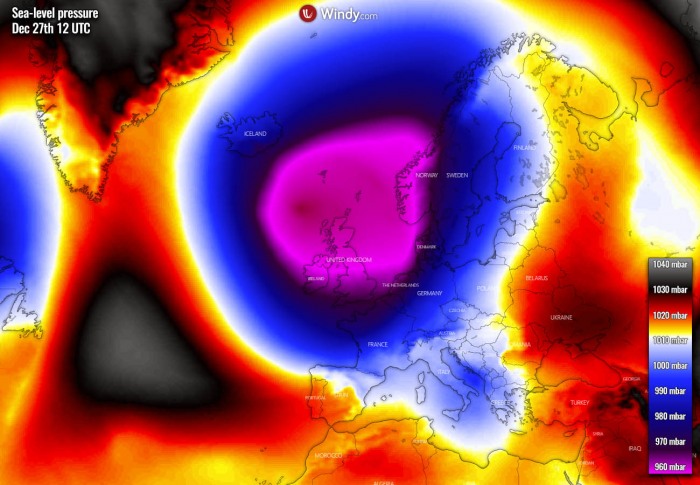 The main surface cold front will be racing south across western Europe, bringing heavy rain and winds from Denmark across western Germany, Benelux into France from the morning hours onwards. 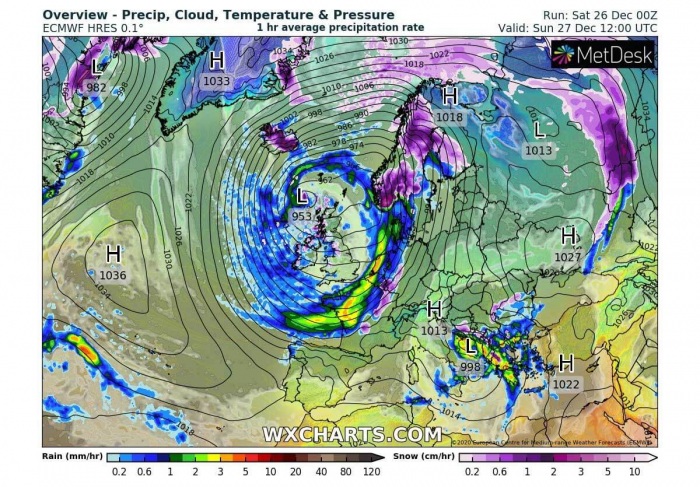 We can also see the remaining low over the Mediterranean, resulting in heavy rain in the southwestern Balkan peninsula, and snowfall further inland over the higher terrain.

Winter storm Bella is generating major waves with its strengthening wind field this Saturday, those will spread towards western Ireland on Sunday. With potentially more than 10 m high waves. 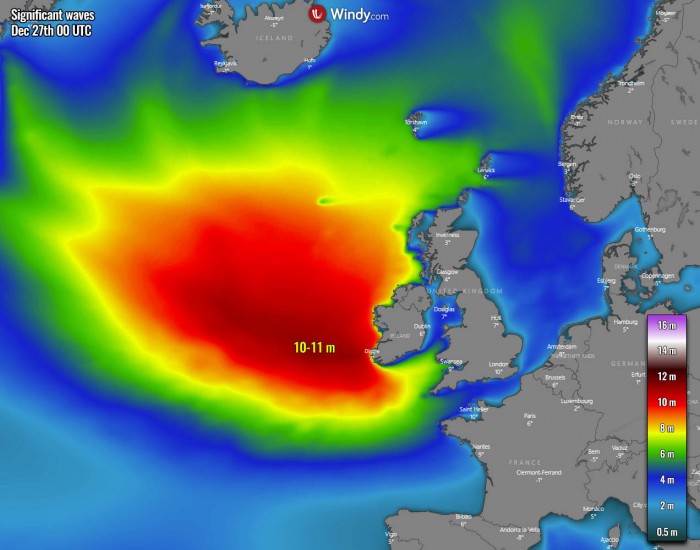 Bella remains a very powerful winter storm also on Monday, while its center slides further south into northern France. The upper high over the North Atlantic is weakening but remains strong enough to block the zonal flow. Cold advection will be underway from the north with Bella. 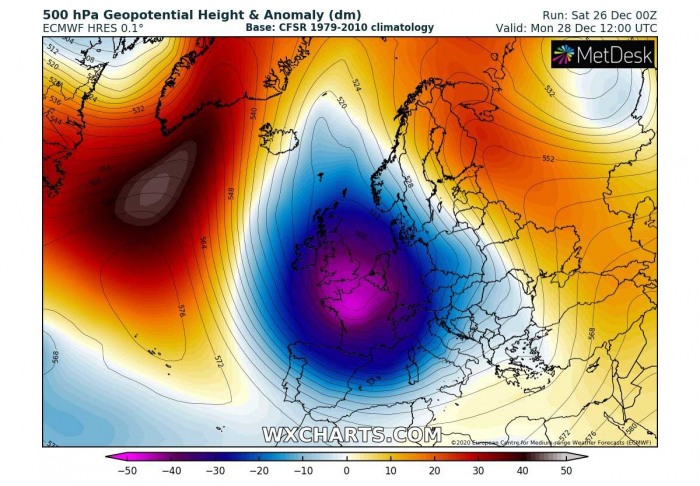 The pressure forecast on Monday reveals how huge the storm Bella will be, also lowering pressure over the Mediterranean. Most of the European continent will actually experience its effect. Strong warm advection over east-southeast Europe remains. 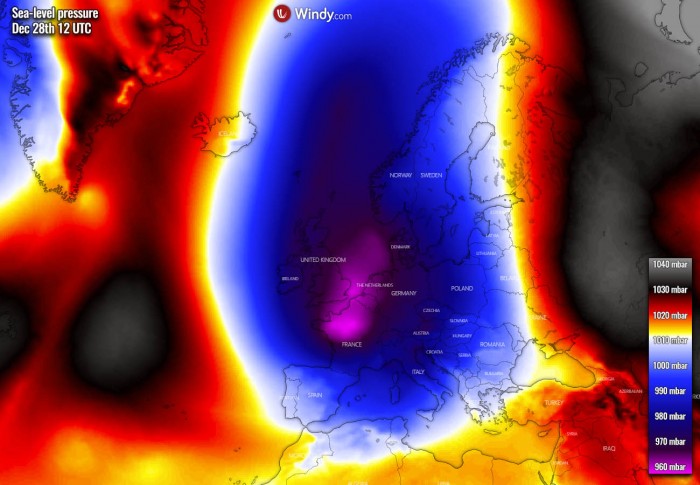 The pressure in the center will be still very low, just shy above 960 mbar.

The lowering pressure over the Mediterranean results in a very intense snowstorm into the Alps, as well as heavy rain for parts of Italy and northwestern Balkans (Slovenia, Croatia). A massive pool of cool, maritime air mass spreads across western Europe and towards Iberia. 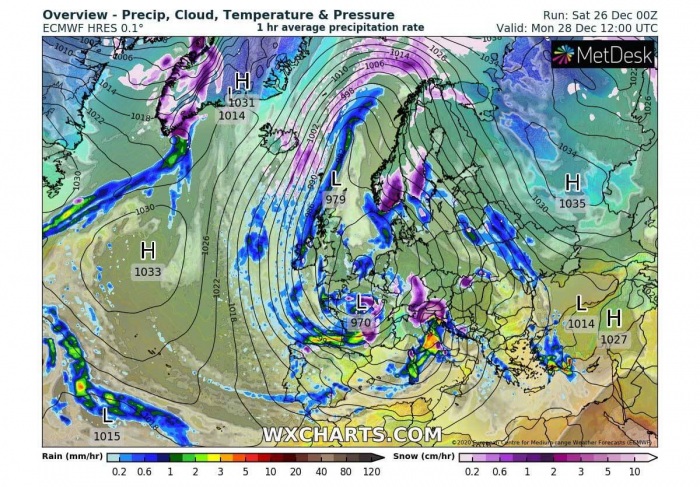 Severe gale-force winds continue across the Atlantic coast of western Europe and keep developing major waves. Those will be 12-13 meters high along with southwest Ireland, the Bay of Biscay, and further towards the western French coast and the coast of northern Spain. 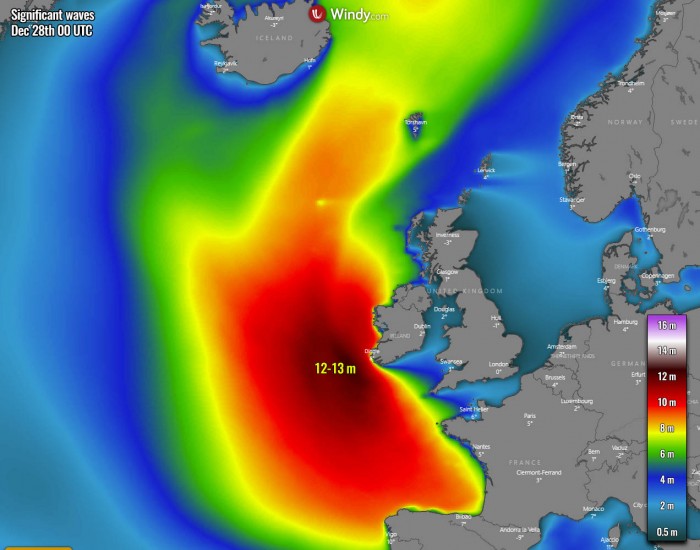 Waves will be gradually weakening through Monday night as both pressure gradient and winds will be losing strength with time.

Severe wind gale winds will spread towards Ireland tonight into Sunday morning as a winter storm Bella is approaching from the north. The coastal areas in parts of England, Wales, Ireland, Northern Ireland, and southern Scotland will be impacted by both severe gales and storm surge. 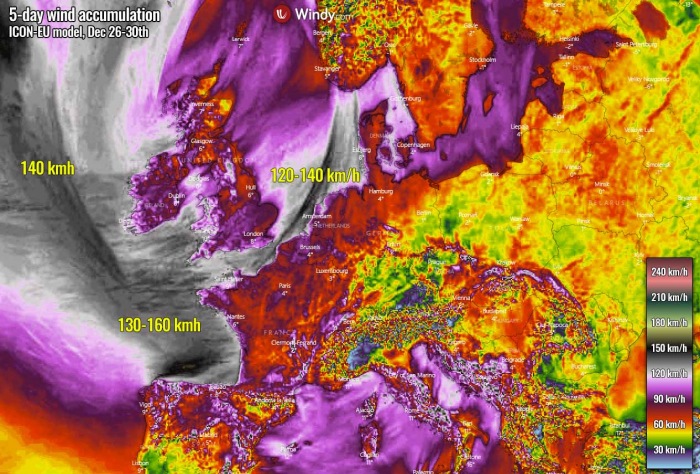 Severe winds seem also possible along and behind the front across the English Channel into the North Sea. Gusts could exceed 130 km/h along the coast of the Netherlands.

Winter storm Bella will bring a lot of rain into northern Iberia, the Italian Apennines, the Alps, and especially southwestern Balkans. Weather model guidance hints 100+ mm of rain over the next five days is reasonable to expect, with rainfall sums pushing into 300-400+ mm over the southwestern Balkan peninsula. 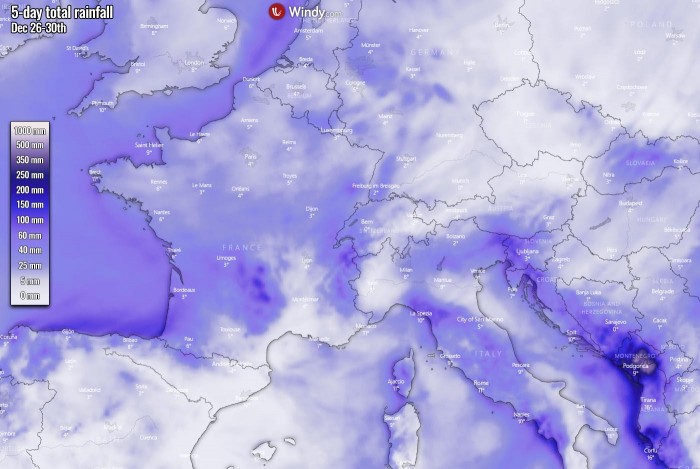 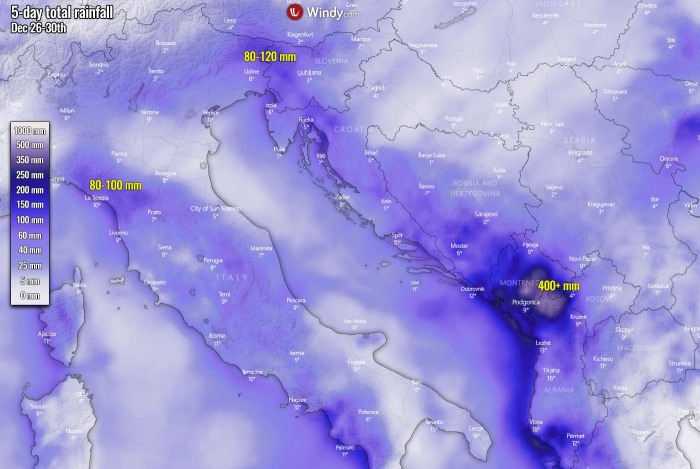 Lower temperatures will also support snowfall in places, with a lot of snow over the Alps, the Massif Central, Pyrenees, and mountainous terrain of the southwestern Balkan peninsula. 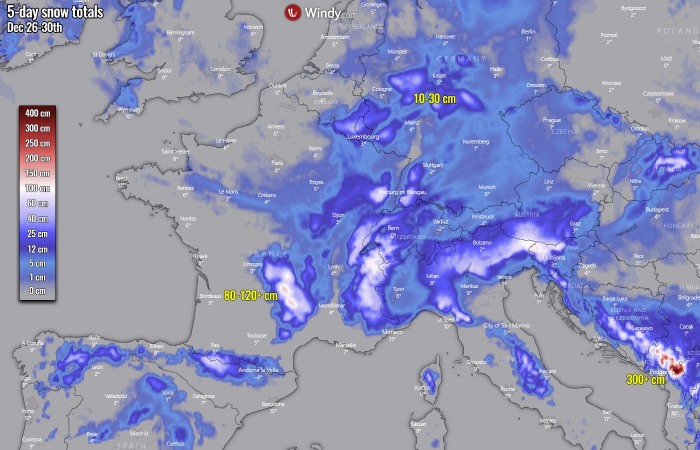 MASSIVE SNOWSTORM FOR THE ALPS AND WESTERN BALKANS

Let’s take a close look at the Alpine region and central Europe on Monday. As discussed earlier, a massive snowstorm will develop over the region as winter storm Bella digs further south-southeast and its associated frontal system intensifies over the Mediterranean.

This develops an intense snowstorm over the Alps, resulting in very heavy snow locally across northeast Italy, south Austria, and northwest Slovenia. Snowfall will be the most intense during the daytime on Monday, gradually decaying into Monday night. 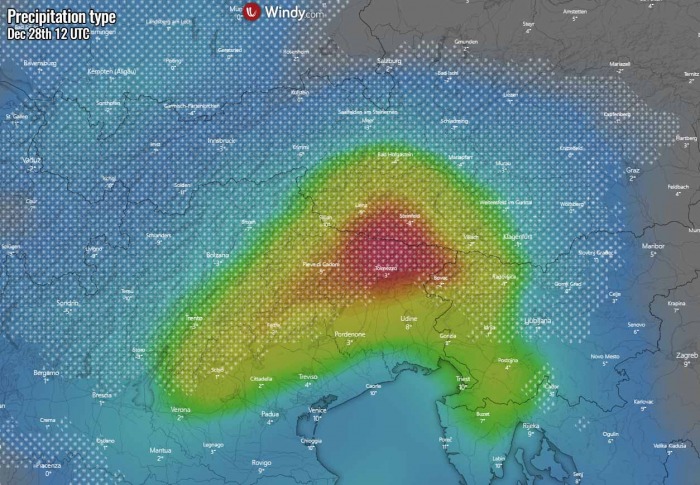 These areas are likely to receive near 100 cm of fresh snow in the mountains. Up to around 60 cm in the west-central Alps as well. There is also potential that northwest Italian plains could see some snow. And indeed the northern Apennines. 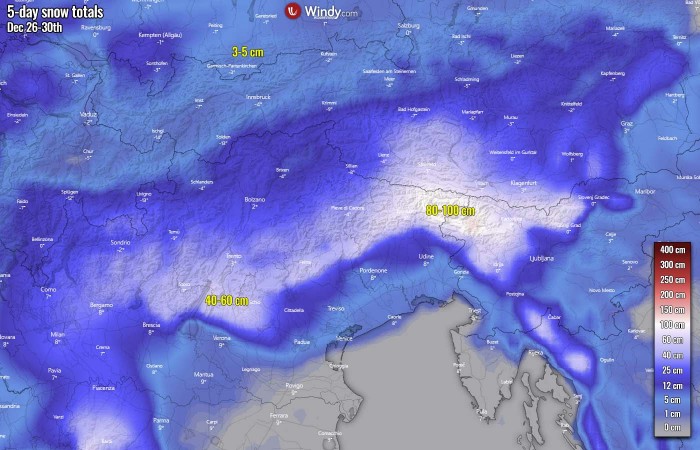 We can also see snow is possible in the surrounding lower elevations around the Alps.

A lot of snow is also expected over the areas experiencing snow this Saturday, the western and southwestern Balkan peninsula. Western Bosnia, southern Serbia, and Montenegro should see more snow. 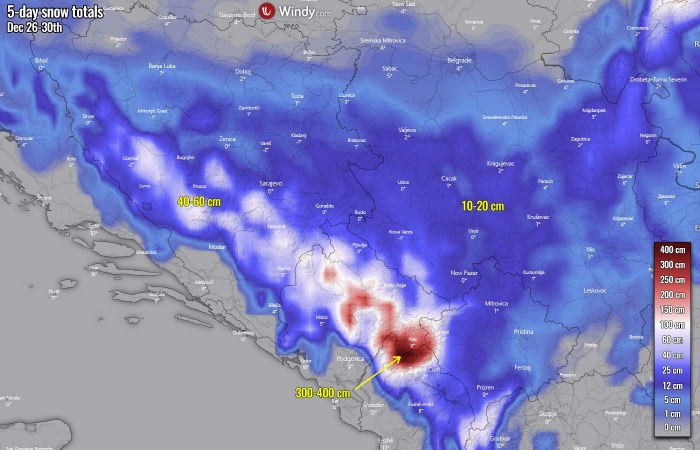 Extreme amounts of snow, potentially even 300-400 cm, is possible over the higher mountains between southeastern Montenegro and northern Albania. Leading to life-threatening avalanche risk into the valleys. The amounts of snow there are very high due to persistent strong orographic precipitation from the excessive Mediterranean moisture advection.