Is 2020 over yet or we have just faced The Day After Tomorrow? Not really, but the satellite view over the North Pacific today is beyond spectacular! There is a tandem of cyclones ongoing south of Alaska. And not a tandem of two systems, but actually a tandem of three surface cyclones. Further west, a very powerful extratropical low is developing and will significantly deepen over the weekend.

A very impressive satellite view of the North Pacific is seen today. Sometimes we can see two cyclones side by side, connected with each other.

Today, Dec 3rd, we can actually see three cyclones simultaneously ongoing over the Pacific. Seriously, how cool is it? 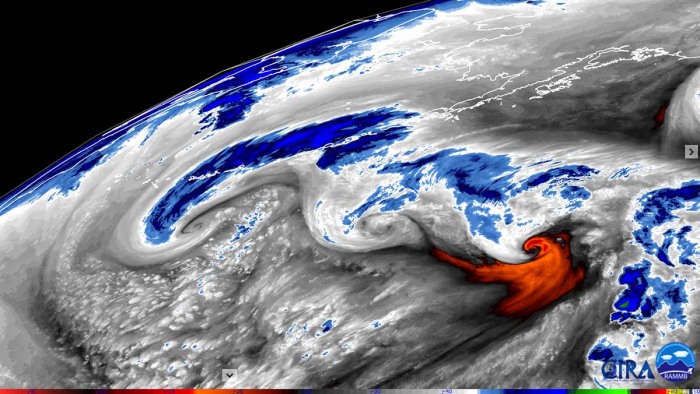 That the systems are working in tandems is greatly visible on this water vapor image above. Their connection is obvious, what a remarkable sight!

Exceptional imagery can be seen on the satellite scans, giving us a picture of how these systems work and are sometimes connected. Attached are various satellite channels.

Notice how cyclones are working in tandem, a triple-tandem! They are connected with each other with the frontal boundary in between. 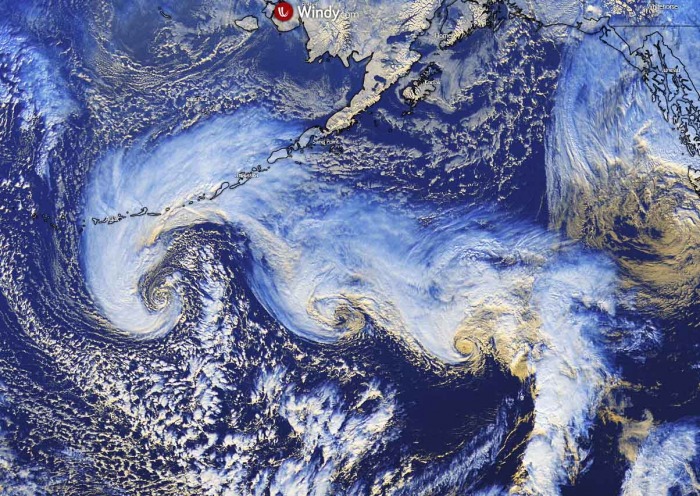 Here is a closer look at the western two systems in tandem, provided in visible, and geocolor satellite channels. The perfect structure of the westernmost is quite impressive! It also has the deepest central pressure, so it is the most organized. 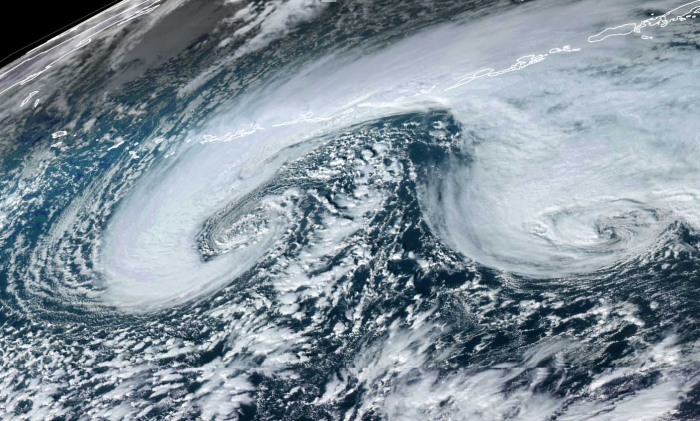 A textbook dry conveyor belt can be seen, wrapping into the core. And a lot of cooler, maritime air mass pushed behind it. Scattered convective cells are visible within this maritime air mass.

Here is a video animation of the triple-tandem development and evolution today:

A FRONT CONNECTS ALL THREE SYSTEMS

What is indeed quite impressive to see is their connection with the front. As can be seen from the satellite, but also on the analysis OPC NOAA chart below. The westernmost system is the strongest and most organized, with a central pressure of 978 mbar.

All three systems are aligned along the occluded front.

Notice there is also another rapidly intensifying low further southwest in the Northwest Pacific. This low will become a very violent extratropical low over the weekend – see further below for details.

Here are the surface analysis data for the mean sea-level pressure estimates by the NOAA Ocean Prediction Center (OPC). Surface low #1 is the westernmost, Surface low #2 is in the middle, and Surface low #3 is the easternmost system.

The analysis reveals their evolution this Thursday:

The ECMWF model reanalysis as of Thursday afternoon has also revealed quite impressive winds and pressure analysis. We can easily see that the westernmost system is having the lowest pressure of the three, and also the strongest winds. Nevertheless, impressive surface analysis of this triple-tandem. 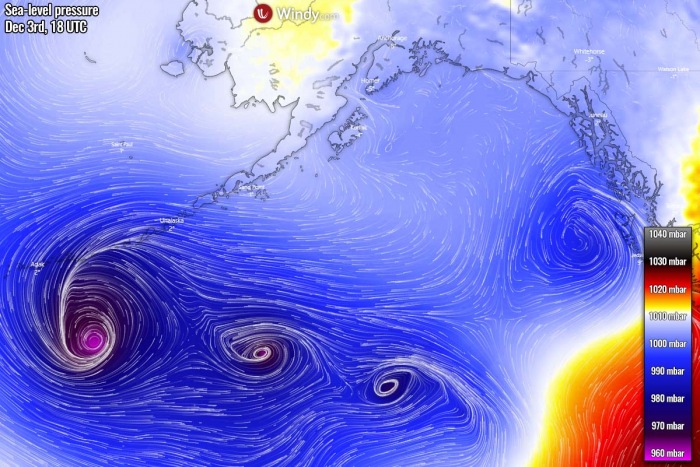 Here is the wind gusts chart reanalysis at the same time, Thursday afternoon. All three systems are organized, producing severe winds around their cores. 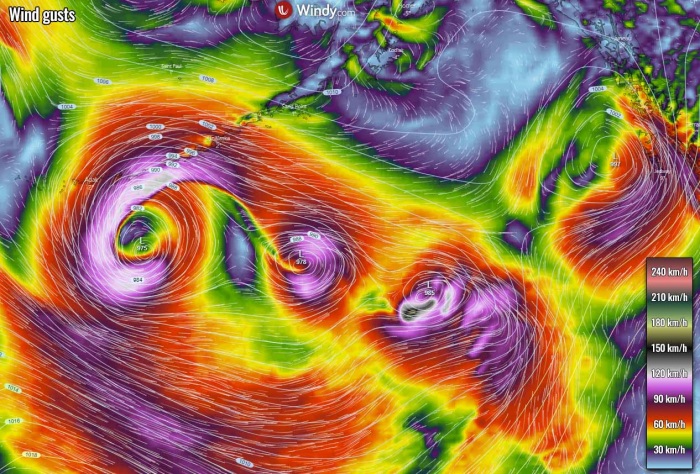 The forecast models do, however, hint at their gradual weakening on Friday. Although, the western two lows will merge together and will be ingested by a new deep low emerging from the southwest on Saturday.

ANOTHER MONSTER CYCLONE DEVELOPS OVER THE WEEKEND

To follow after this triple-tandem of cyclones today, there is a new depression forming further west. We can see it already developing to the east of Japan on the NOAA analysis chart below.

The cyclone is expected to extremely rapidly intensify over the next 48 hours and lower its central pressure for almost 60 mbar. 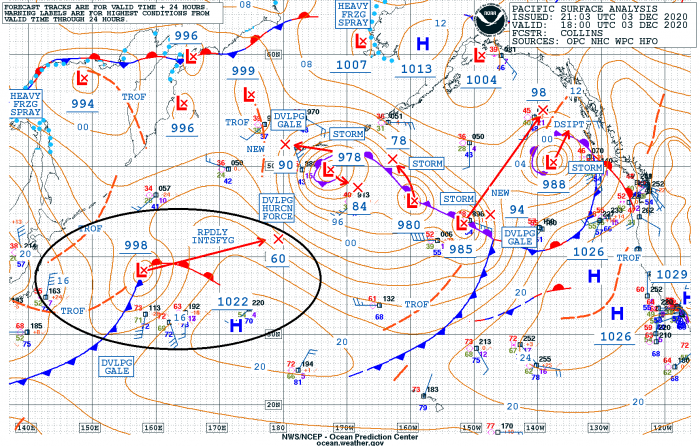 The system is at 998 mbar, as of 18 UTC Dec 3rd, and deepening. Expected to soon begin its very rapid intensification and lower its central pressure to around 960 mbar over the next 24 hours. It will be located to the southwest of the Aleutian Islands by Friday evening.

Thursday’s evening satellite image reveals a quite impressive picture of all systems together over the Pacific. We can see the triple-tandem over the North Pacific and a new, rapidly developing system over the northwest Pacific. 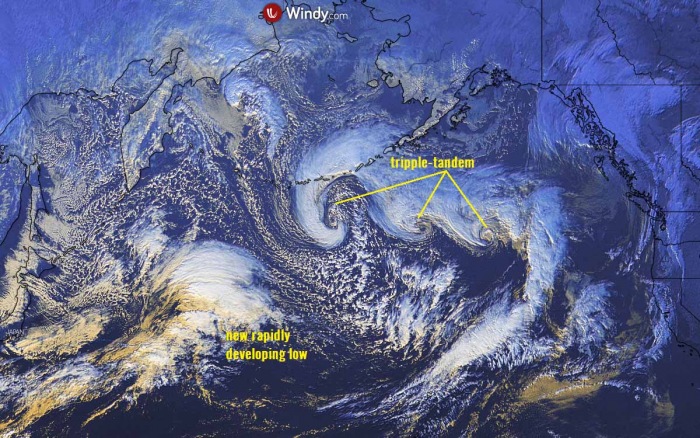 Its trajectory will bring it towards the northeast, approaching the Aleutian Islands on Saturday. It will already be a very deep low by that time with rapid intensification still underway.

Towards Saturday night, its central pressure will likely peak around 940 mbar. 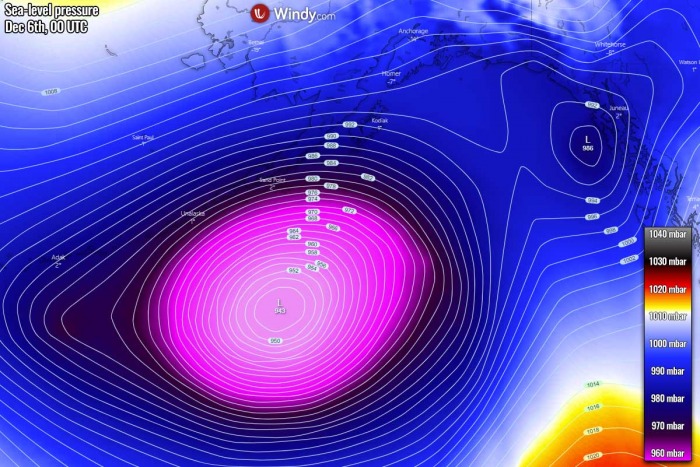 Violent, hurricane-force winds are expected to develop with the system. It will likely peak around 160-180 km/h. The good thing is that the system will be far away from any land areas at that time.

With such a rapid intensification and a large system expected to become, its violent winds will also generate massive waves towards the North Pacific. Models are hinting that more than 15-meter waves could develop. Significant waves will gradually spread towards Alaska.

We will have more updates on this over the weekend – stay tuned!