The next full moon, known as the Beaver Moon, will result in a partial lunar eclipse this week, Friday, Nov 19th, 2021. It will be visible across North and South America, Australia, the Pacific, New Zealand, and Asia. While the full moon passes through Earth’s shadow, skywatchers will be treated to a spectacular celestial show that will not appear again until May next year.

Typically, Lunar eclipses occur up to three times a year and they can be easily seen with the naked eye.

The partial eclipse occurs overnight from 18th to 19th November 2021 and lasts for a total of 6 hours and 1 minute (full eclipse). The partial eclipse will last for about 3 hours 28 minutes and 23 seconds, with a maximum of 97.4 percent (%) of the Moon covered by the Earth’s shadow.

During the early morning on Nov 19th, observers across both North and South Americas, the Pacific, Australia, and New Zealand will see the Moon entering the Earth’s shadow, creating a lunar eclipse. The best celestial show will happen over the West Coast of the U.S., the Pacific Northwest around 1 a.m., and Hawaii around 11 p.m. The weather conditions seem promising for observers across southern portions of the West Coast, and likely also over Hawaii.

The Moon moves right to left, passing through the penumbra and umbra, leaving in its wake an eclipse diagram with the times at various stages of the eclipse. Below is the video animation of the eclipse this year:

Space enthusiasts, amateur skywatchers, and astronomers are excited ahead of this partial lunar eclipse coming up. Here is everything you need to know about lunar eclipses and how we can photograph them.

WHY DOES A BEAVER BLOOD MOON TURN RED AND WHY IS THE LUNAR ECLIPSE SO LONG THIS YEAR?

A Beaver Moon is the term we use when the full moon occurs in November. This is the time when beavers are preparing for winter, hence this month’s lunar eclipse event name. Although astronomically speaking, this lunar eclipse might be nothing special, we can see the moon turning reddish when the full eclipse happens, known as the Blood Moon. It is normally more of a whiteish color.

Note: The Blood Moon is not a real scientific term, but it is widely used nowadays as the moon appears red during the full eclipse.

Normally, a full moon phase does not have an eclipse because Earth’s moon orbits in a slightly different plane than the Earth and the Sun do. So it needs to be a perfect angle that an eclipse (partial or full) occurs. When this finally happens, the Earth passes in between the moon and the sun and cuts off the sunlight, causing an eclipse.

The partial lunar eclipse occurs when the Earth only partially blocks the sun, so the darkest part of its shadow falls across the moon’s surface. It also happens that the moon passes through the lighter part of Earth’s shadow, this causes a penumbral eclipse. During such an event, the moon darkens much less than during a typical lunar eclipse, so many observers don’t even notice the difference with the normal full Moon.

Indeed, the more spectacular events are the full eclipses. While our Moon is traveling through the Earth’s shadow, some sunlight is reflecting from Earth’s surface, mostly from the sunrises and sunsets also reach the surface of the moon. As the light waves are stretched out, they appear in a reddish tone. When this red light strikes the moon’s surface, the moon also appears in red color.

Then, it strongly depends on how much pollution is present in the air, or how much cloud cover or dust is in the atmosphere at the time of the eclipse. This affects how reddish the moon will appear. 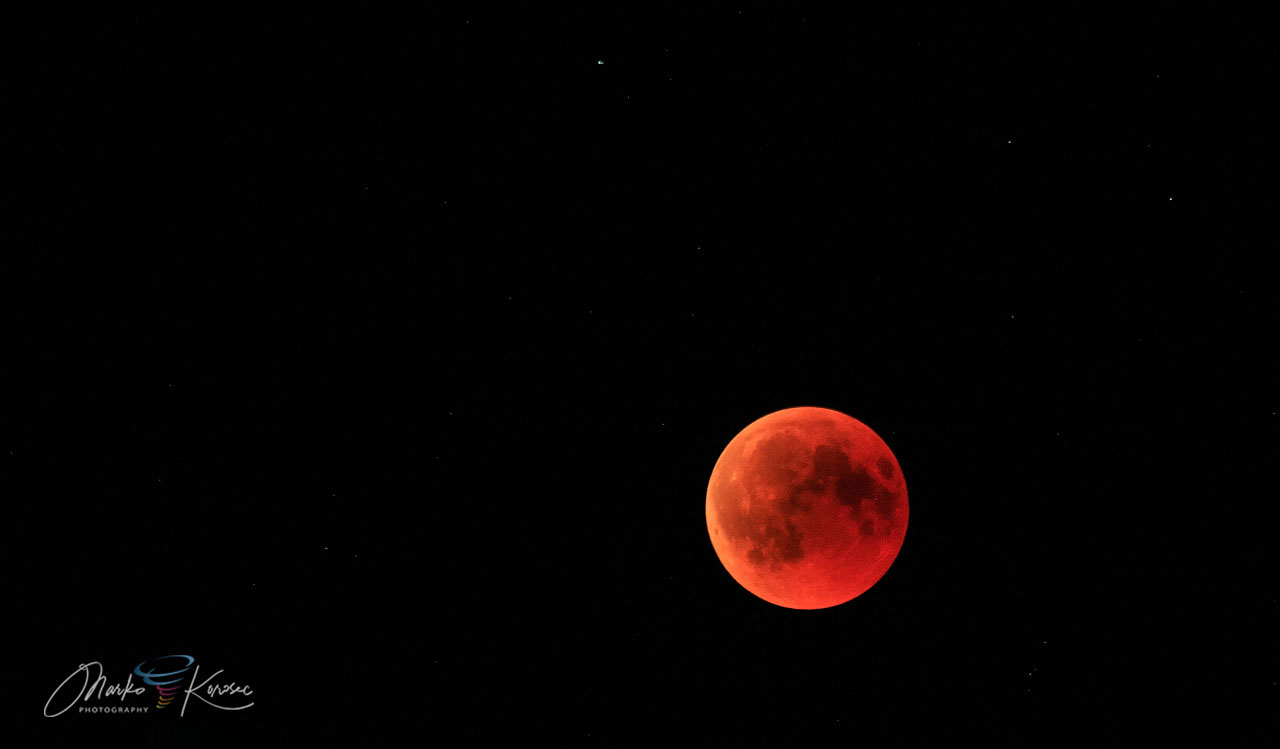 Above: A total lunar eclipse with Milky Way and planet Mars on July 27th, 2018. Photo by Marko Korosec

But why is the November 2021 lunar eclipse so long? This is because the maximum point of the eclipse comes about 41 hours before the Moon reaches apogee, its farthest point from Earth. When Moon is farther away from us, it travels slower along its orbit, so it takes more time to pass through Earth’s shadow.

When the Moon is near its apogee, it earns the title Micromoon, while the closest point – perigee features a Supermoon.

If you are unlucky with fair weather or time this Friday, there will be other opportunities over the following years as well. As Blood Moon eclipses happen quite often, the last one we saw happened on Jan 20th/21st, 2019. Moon was near its perigee at that time, so it was a Supermoon.

Here are all the lunar eclipses over the next 10 years that will also happen to be Blood Moon events. The list covers the whole world, so some travel will be needed if you would want to observe them all.

Have your eye caught any special dates above? One can see that the total lunar eclipse happening in 2028 will bring the Blood Moon right on Christmas Eve. Now that is pretty cool, isn’t it?

For some skywatchers across Asia this event will even be around midnight. What a special event to start a New Year 2029 it will be for those! The above chart is provided by Timeanddate.

HOW TO PHOTOGRAPH MOON PHASES OR ECLIPSE

Here are some tips on how to take pictures of the moon or the partial/total lunar eclipse. It is actually not that difficult to photograph as you will see below.

First of all, we set the camera to a tripod. It is advised to use a telephoto lens such as 200 to around 500 mm. Or even larger zoom lenses are needed if you would want to have a nice zoomed image of the Moon. The more zoom you use, the bigger picture of the moon will appear. A need of a shutter release is required.

Many photographers also want to frame the lunar eclipse, full moon, or the total eclipse (Blood Moon) with some landscape in the foreground. It definitely gives us some great enhancement to a landscape photo, so the use of a wide-angle lens, e.g. 15-30 mm focal length is a good choice too. 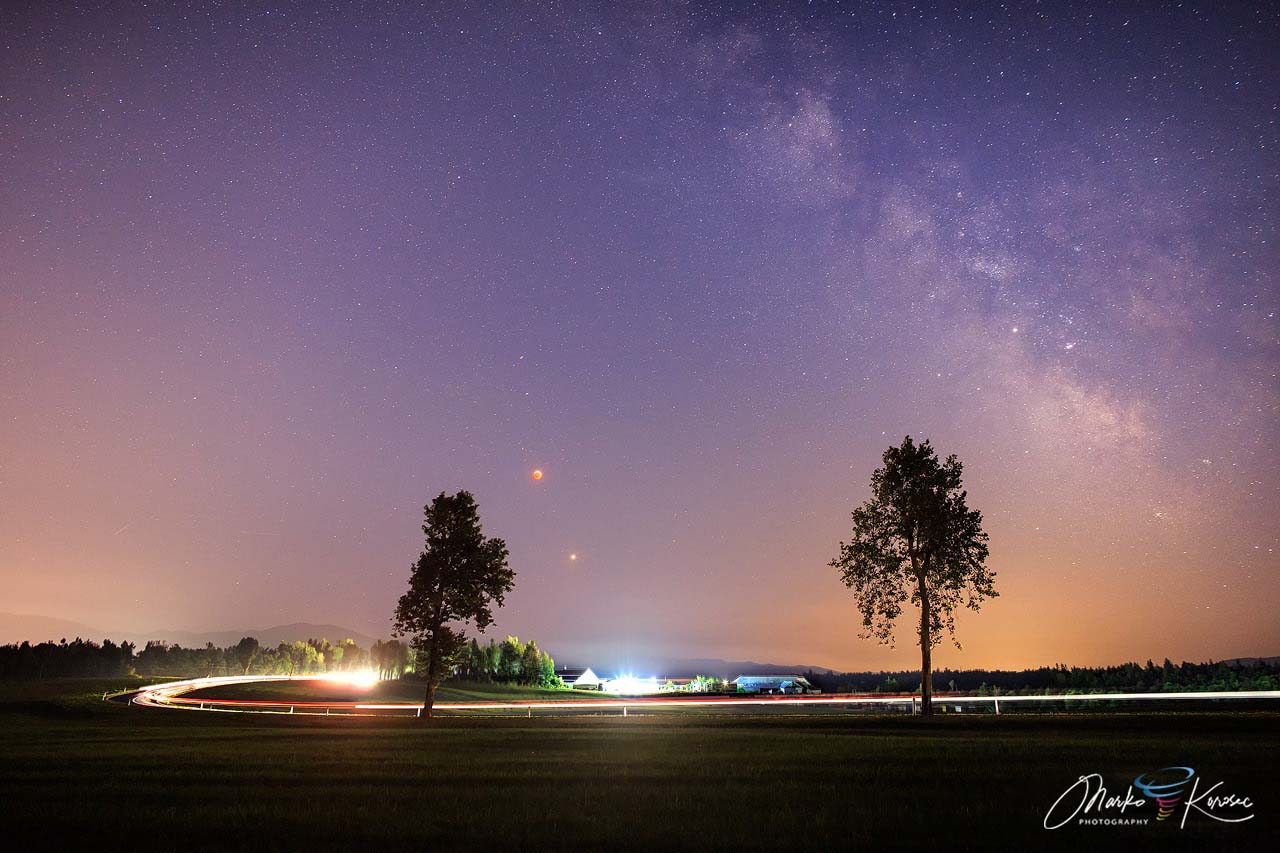 It is also important to make a good focus on the Moon. While autofocus could work, it is advised to use a live view and do it manually while zooming in into the Moon’s craters on its surface. Normally take a few test shots first, so you are sure your focus is good enough.

Set your camera to M (manual) mode, set the ISO to 100 or 200, and the aperture value to between f/5.6 and f/11. Then, adjust your shutter speed to between 1/125sec and 1/250sec. This is a good start, then you adjust your settings if the Moon appears too bright or too dark. The exact settings will indeed vary depending on your camera and the brightness of the Moon, so be sure to play around with the settings to have the best exposure possible.

This will be the last lunar eclipse of the year, with the moon being partially obscured by the Earth’s shadow. But when will the next lunar eclipse take place? It isn’t so far, as the next one is scheduled to take place on May 16th, 2022. It will be a Blood Moon event.

Good luck with your observations, and feel free to report us!