Towards the end of April changes in the Geldingadalur volcano eruption happened. Recently, the eruption was more explosive with magma jets occurring in repeated intervals. It was first around 10-minute intervals, which has then changed to about 30-minute intervals on May 5th. Some geysers of lava fountains were reaching more than 400 meters high. We are sharing live reports from the eruption site.

It has changed quite a lot since the Geldingadalur volcano eruption started on March 19th evening this year. First, it was a several hundred meters crack with the eruptive fissure along the crack. After about a month, changes in the volcano eruption activity have brought lava fountains, shooting magma jets high into the sky. There are now 5 open fissures with erupting magma.

In early May, there were even giant lava fountains observed by those visiting Iceland volcano at that time. Geldingadalur volcano continues to show a remarkable natural spectacular of 2021. 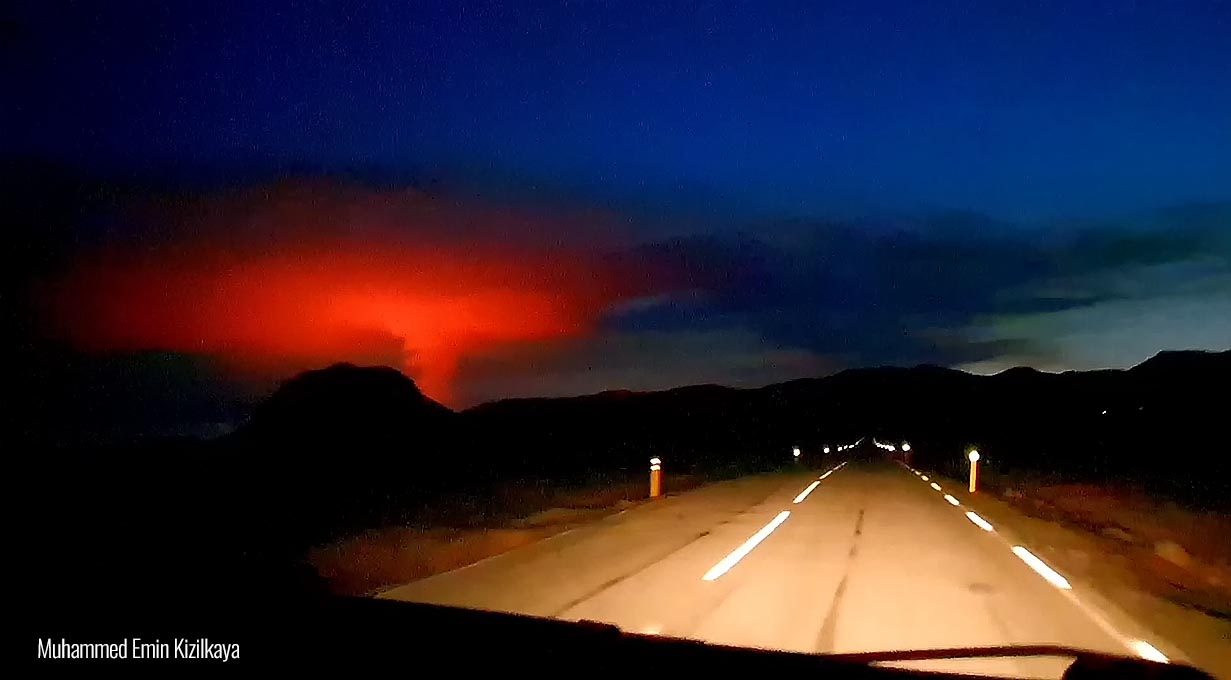 This weekend, the eruption activity has started again in the main crater at the eruption sites in Geldingadalur. The crater recovered well overnight to Sunday and now has a similar activity in it as it did before the breakup and lava fountains earlier.

Just before the activity changed, the lava fountains were still really powerful, the highest one at 8:58​ probably exceeded 450 meters in height. Here is a video from the volcano eruption site this week, showing a spectacular lava fountain as magma jets shoot high into the sky. Video by SWE reporter Muhammed Emin Kizilkaya.

According to the latest official statements by The Scientific Council for Civil Protection, the seismic activity on the Reykjanes peninsula is low. The continued earthquakes that are detected in this area of Iceland are estimated as aftershocks. This is where the corridor formed in the run-up to the eruption in Geldingadalur.

Also, no significant land changes have been observed by the GPS devices, confirmed also by the satellite observations with very few changes. 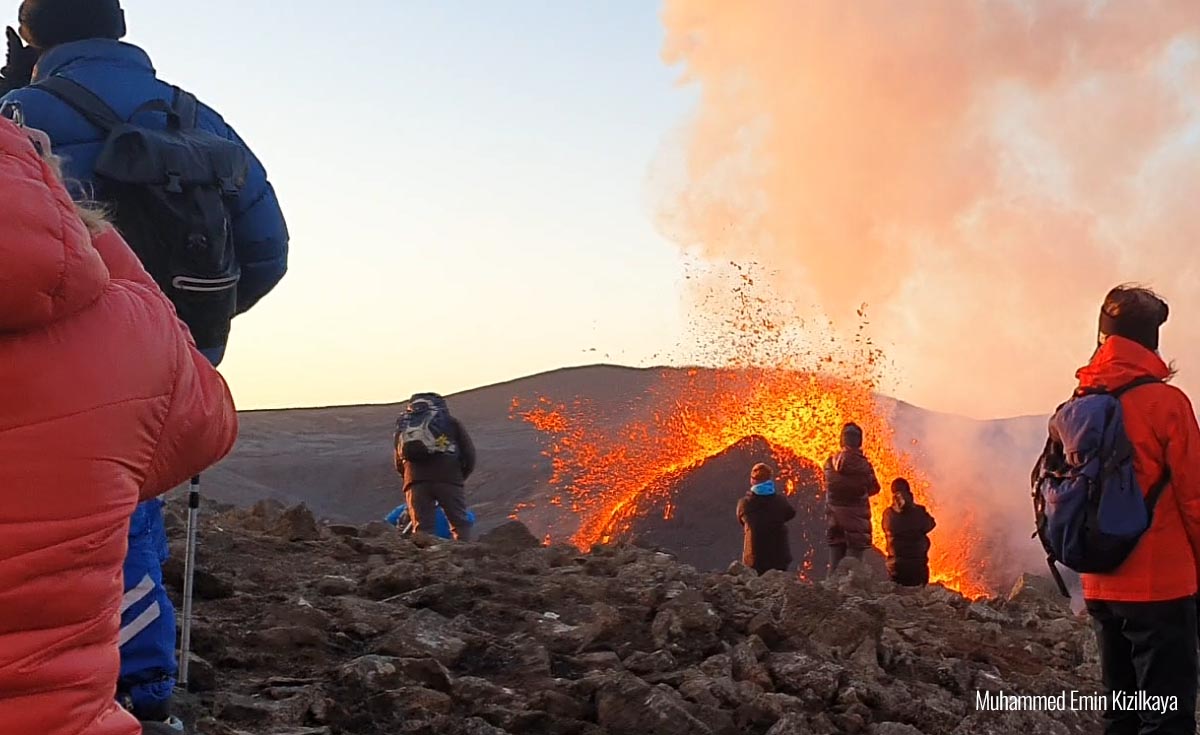 The current magma jet activity has regular intervals and can blow lava fountains several hundred meters high. Therefore, the magma becomes ash and rocks that can fall to the ground hundreds of meters from the crater itself. This has also led the authorities to expand the danger zone around the eruption sites wider.

This is also another reason and a good indication that the Geldingadalur volcano eruption in Iceland should continue for weeks, potentially even for months. So if you are haven’t been there yet and you would want to see this spectacular eruption, you haven’t missed much. The eruption is not yet coming to an end.

Here is a very impressive graphics by the Icelandic Icelandic Meteorological Office – IMO indicating that there was a significant change in the seismic tremor measurements at Fagradalsfjall this past week. 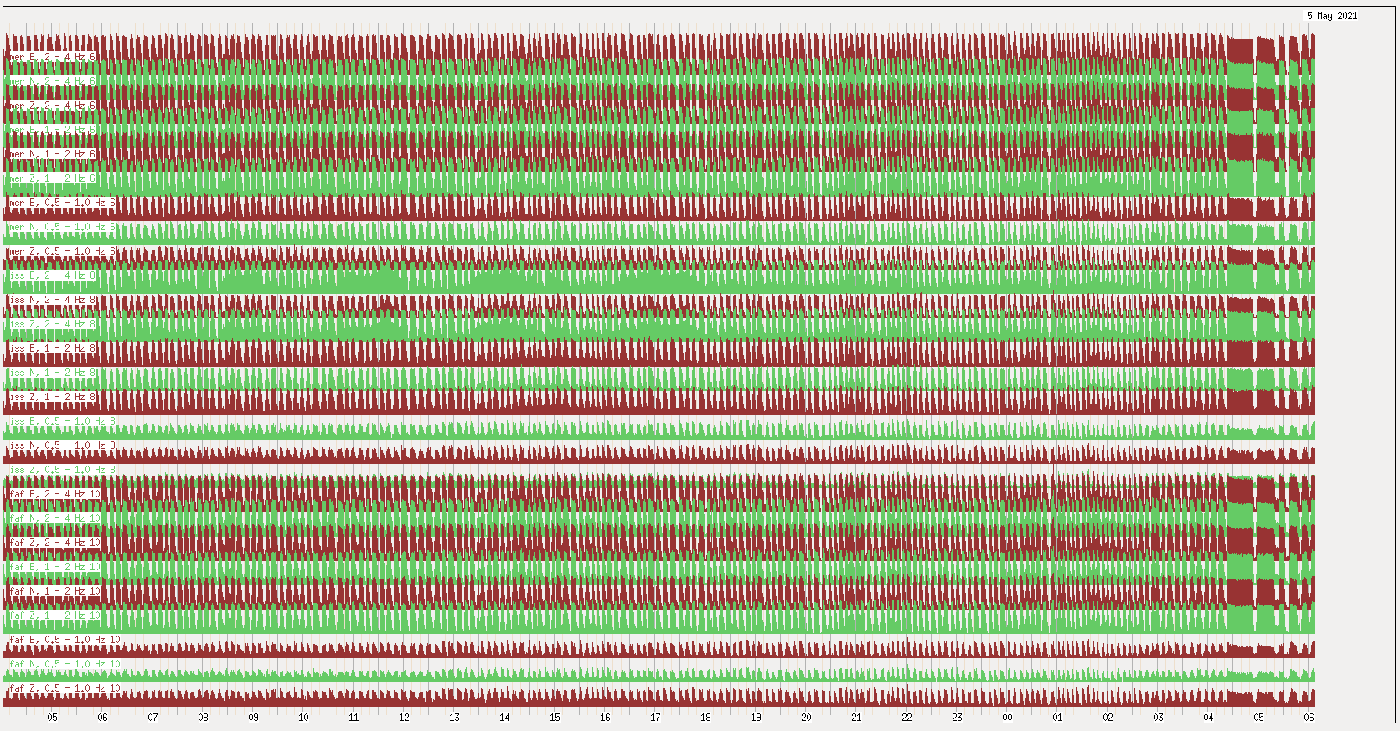 The more explosive eruptions took place in rather regular intervals, and the rhythm of the lava fountains had been the same until May 5th. There were approximately 10 minutes intervals between magma jets, known as lava fountains. But since Wednesday, May 5th morning, the magma jets are occurring about half an hour apart, and those have become even more powerful with occasional hundred meters high lava fountains.

On the chart above, one can notice the periodic intervals of eruption until May 5th, then an approximate 30-min erupting interval started. You can see those changes on the far right of the chart. Image courtesy of Icelandic Meteorological Office.

These lava fountains were seen going high in the sky with the ongoing volcano eruption. It was quite a spectacle of the magma jets blowing off from the “lava Geysir”. Again lately, the original crater seems to have picked up again on the leading activity with a new stage of the eruption. 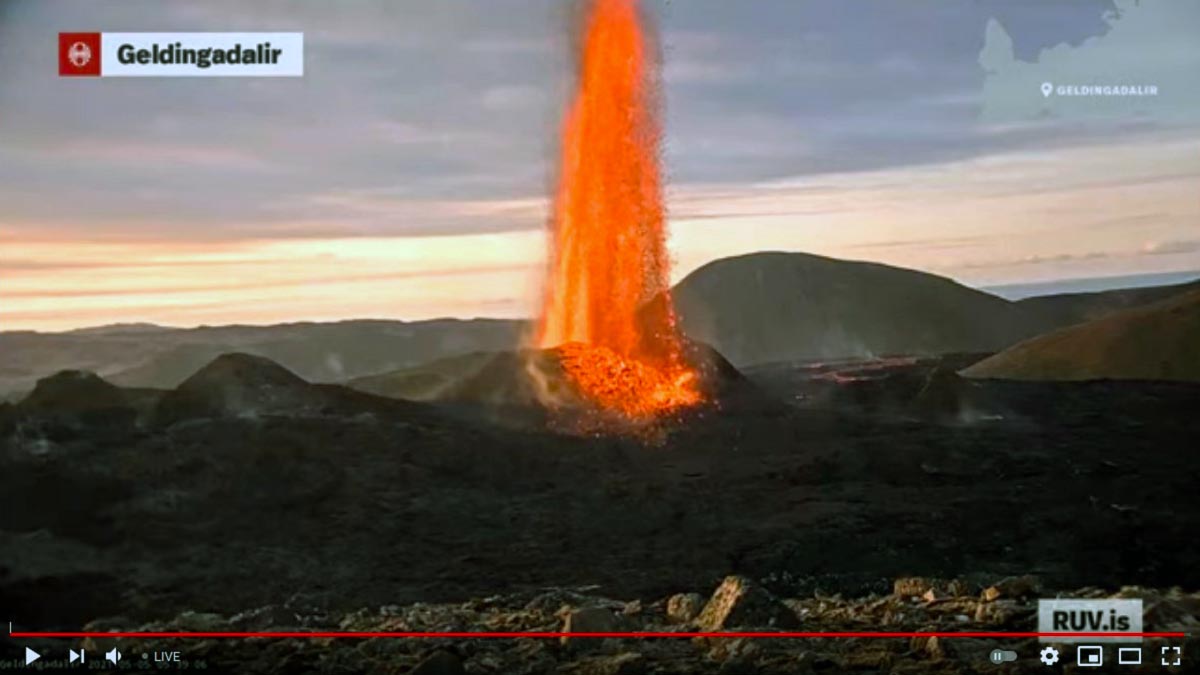 Above: The Icelandic Meteorological Office also has several webcams installed at the eruption site, and one of the RÚV webcams has recorded an unusually high magma jet that went beyond the current perspective of the webcam view. Calculations have shown that those fountains have risen even more than 460 meters above the crater.

ERUPTION LIVE COVERAGE FROM OUR REPORTER IN ICELAND

The SWE team is very proud to have a special member living in Iceland, Muhammed Emin Kizilkaya. Our reporter is covering the Geldingadalur volcano eruption when his schedule and weather permit the visits to the eruption site. You might remember his valuable reports about 10 days after the eruption started in late March, see below: 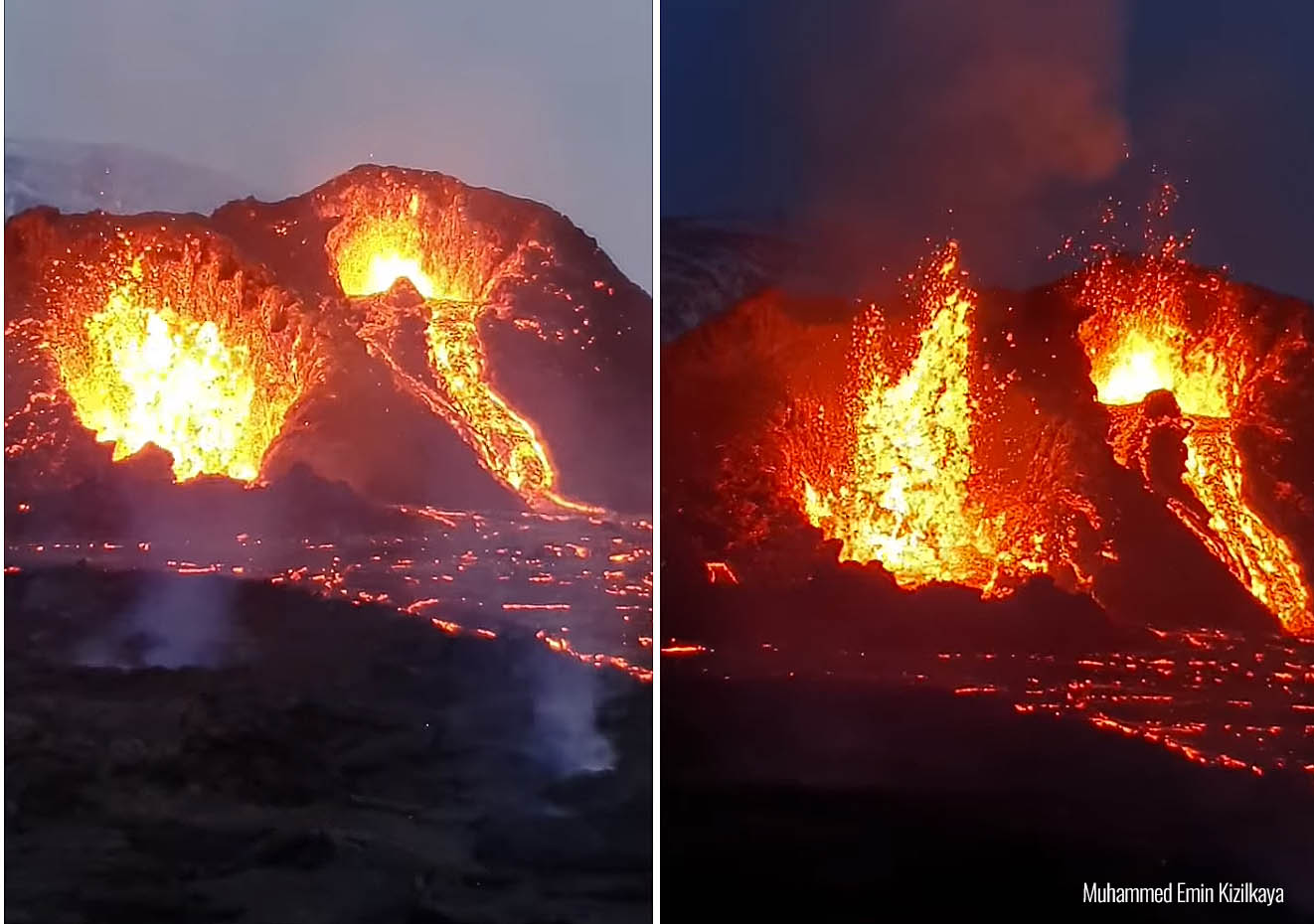 Lately, Muhammed couldn’t miss the chance to experience and share the change of the Geldingadalur volcanic eruption, as observers are now seeing magma jets and lava fountains shooting high into the sky. Here is a spectacular live report of lava fountains Muhammed did for our Facebook page on May 5th. 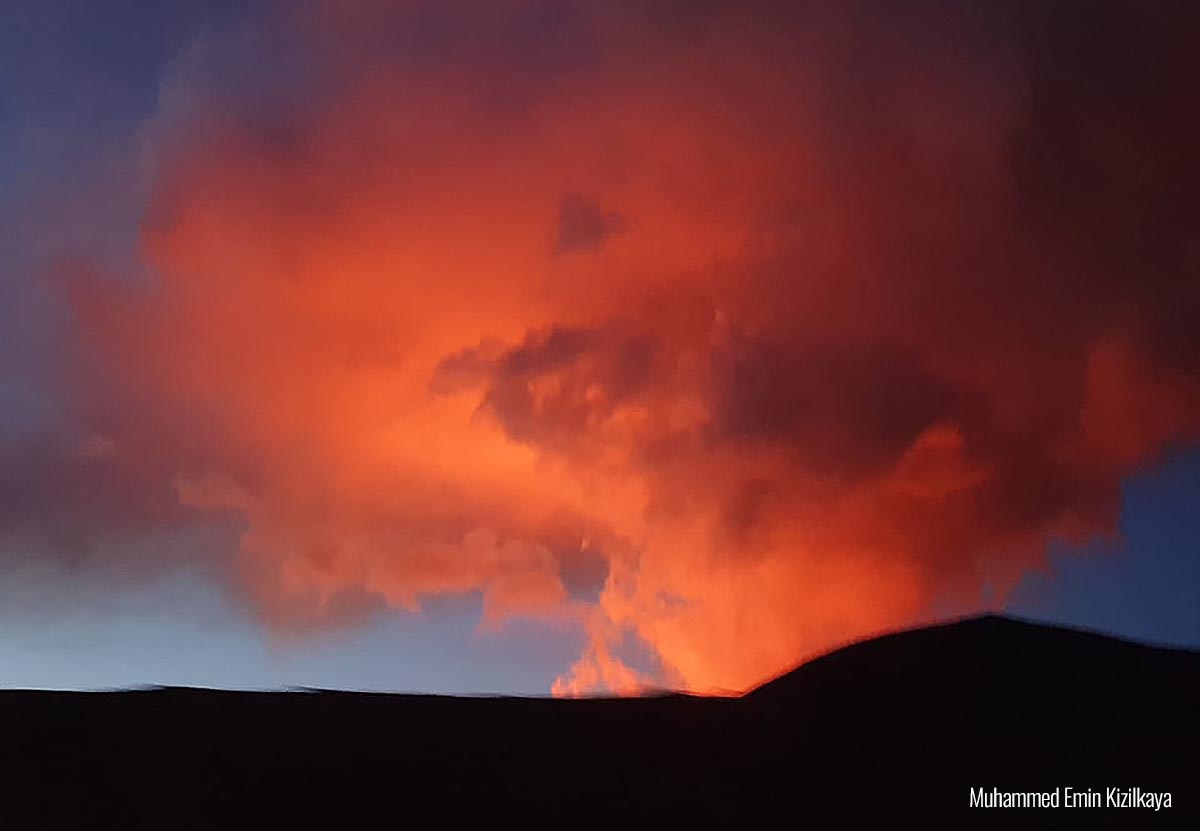 Muhammed also reports: “At this point, we were walking in another direction towards the volcano. The whole infrastructure has changed and what was only one volcano for a month ago has become five (5) volcanoes stacked beside each other in the line.”

He adds “I’ve never seen or experienced anything like this before! And the valleys were filled up with lava that has already become rock now. The whole valley was smelling of barbecue like someone was burning meat on coal.”

Muhammed also told us that “it was raining pyroclastic rocks over us” and “Everything the volcano would erupt, we could feel a heatwave hitting us even though the distance to the volcano was more than 500 meters!” 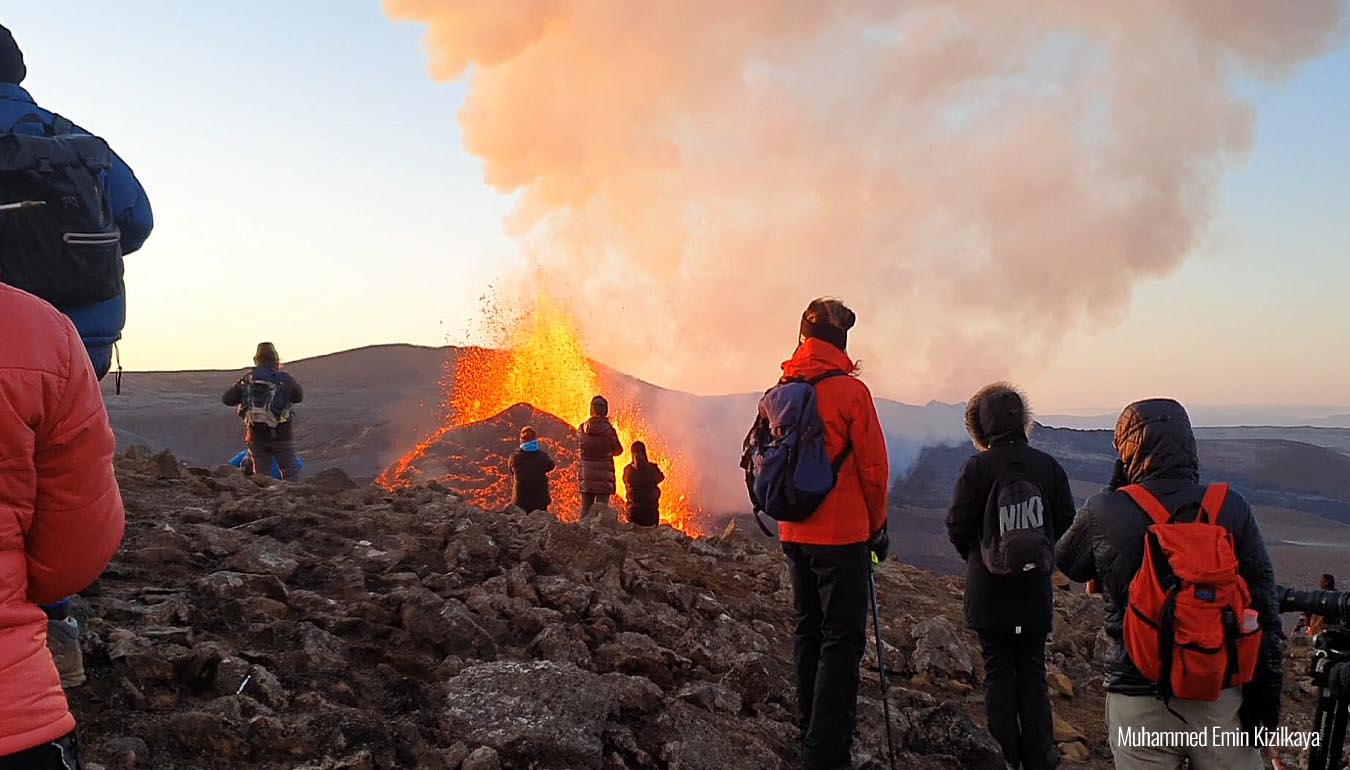 At the moment, the authorities are keeping an eye on the further development of fissures resulting in some parts of the area being closed. The volcano is behaving very interestingly. Muhammed has also reported how the “Volcano is pulsing like the geyser. These pulses have intermittent active periods of 8-12 minutes, with 1-2 minutes of rest periods in between.”

Based on the observations on the eruption site, the active pulses start with a strong fountain activity, with fountains reaching up to 100-150 meters above ground (sometimes even 300 – 400 m) level, or even higher as we could have read earlier. These pulses are very apparent in the seismic tremor from seismic stations in a wide area around the eruption site. 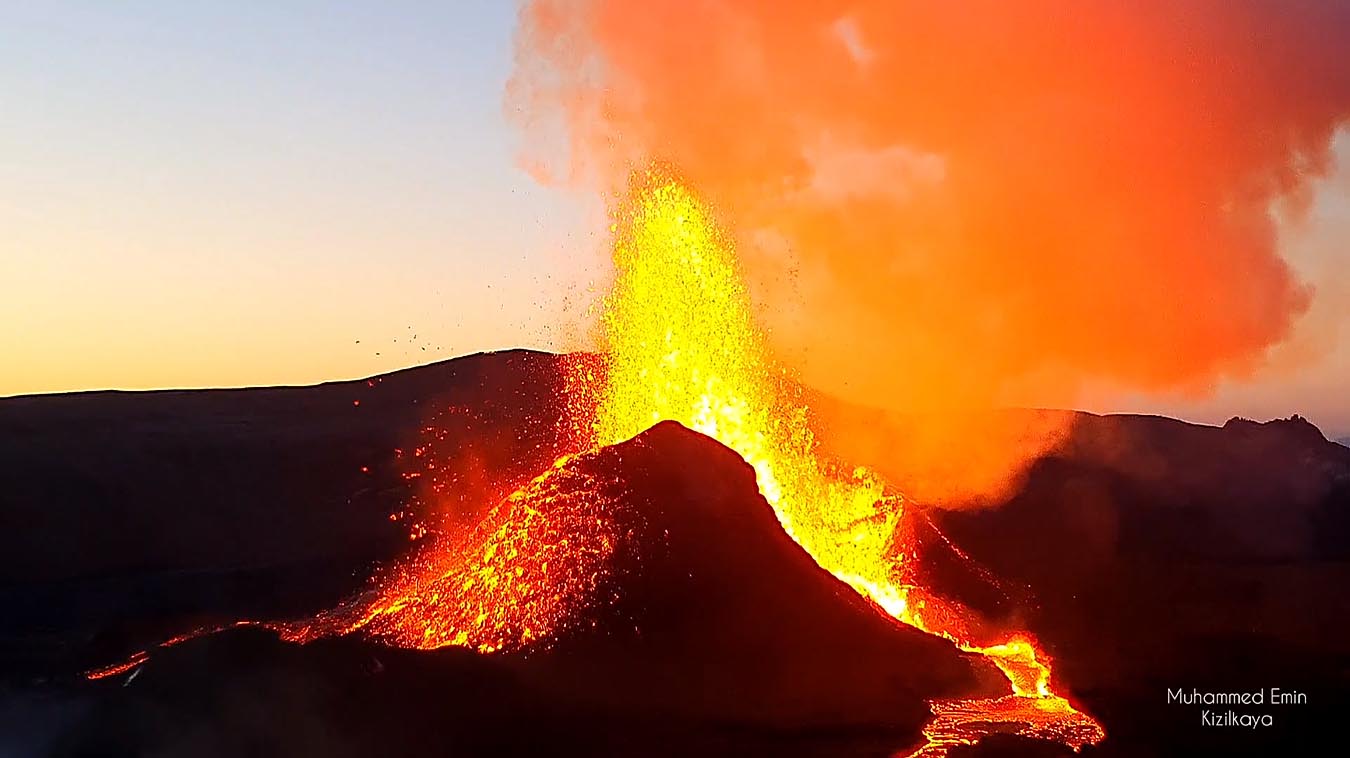 It is not clear what is causing these changes in volcanic activity, but changes in magma flow, the chemical composition of magma/gas, or possibly changes in the volcanic conduit cannot be ruled out. The shape of the uppermost part of the conduit has changed. Possibly, a constriction has formed, affecting the upwelling of large gas bubbles. When they burst, the magma jets shoot into the air.

The scientists are comparing this pulsive volcano with a dormant volcano called Prihnukagigur. This volcano is the world-famous volcano with an enormous magma chamber, the only magma chamber in the world that can be entered, and has a depth of 213 meters (699 feet). Prihnukagigur is located in the volcanic system of Brennisteinsfjöll near the capital Reykjavík, Iceland.

And to add it even more remarkable sight (even for the locals), the recent explosive lava fountains were easily visible from the capital of Iceland, the city of Reykjavik which is about 35 km (22 miles) from the volcano eruption site.

A photographer Sigfús Steindórsson shot this exceptional video of lava fountains visible from the location around Reykjavik with the city in the foreground. That makes are really stunning perspective with the eruption fountains in the back. This video was filmed on Sunday, May 2nd. 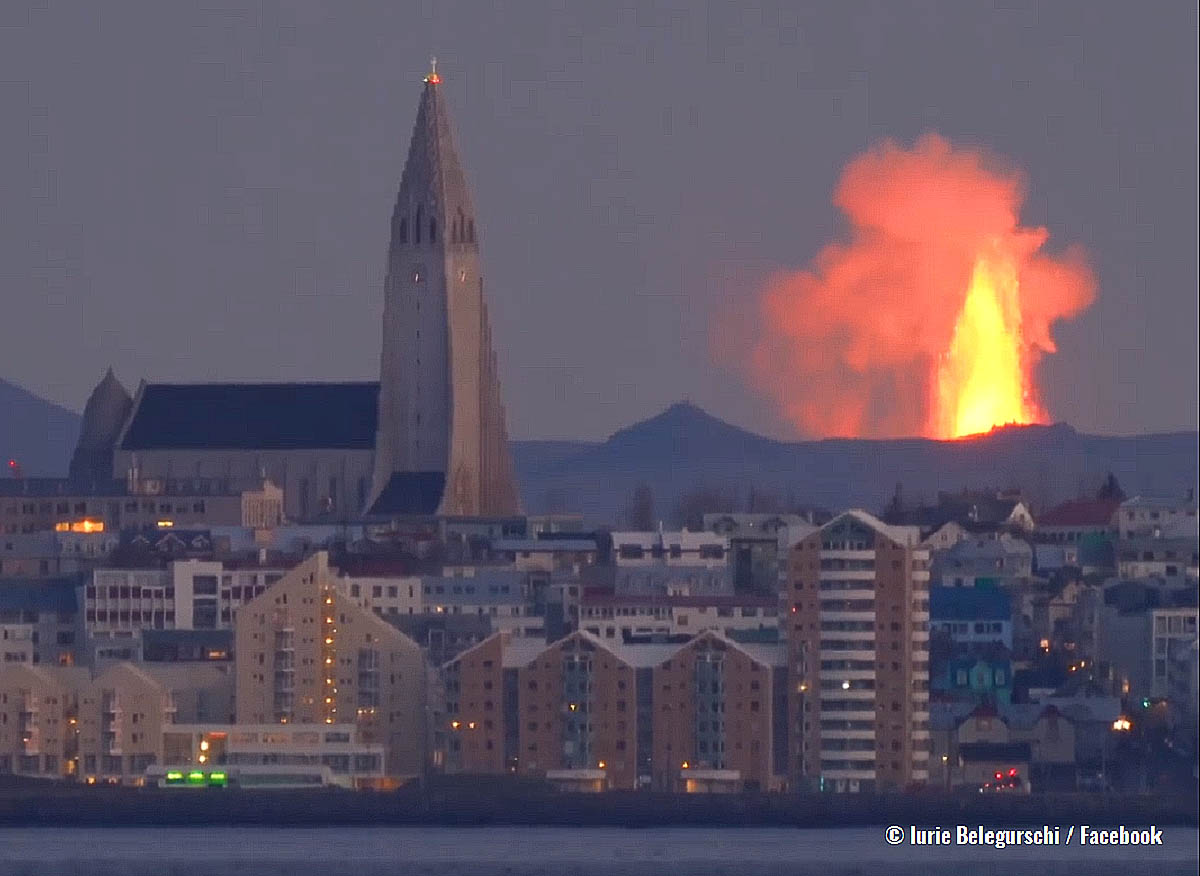 Also, another well-known photographer Iurie Belegurschi had a great view of the magma jets behind the city of Reykjavik. We could call this once-in-a-lifetime event, even when living in Iceland.

You can watch the Iceland volcano eruption live on several pages, streaming via the youtube platform. Here are the two most interesting and viewed lately. Surely worth the watch and monitor how the activity continues:

While one can find some very impressive footage of this eruption on youtube, many tourists are visiting and experience lava fountain geysers, despite the difficult times with the ongoing coronavirus pandemic. But those who have been there can tell the remarkable experience. Take a look at some of the great videos below.

An exceptional view of the lava fountains in the last days, the video was shot by Bjorn Steinbekk.

Here is another video was taken in the middle of April by Brian Emfinger, with some great close-up views of the Geldingadalur volcano eruption both from the ground and airborne with drone footage. Drones can bring such a remarkable new experience with pretty much everything nowadays.

Not surprisingly, many drones were melted and lost in the craters while flying way too close to the heat source and indeed the lava fountains. Those who made it through surely got their shots.

READ MORE about the background of the volcano: