The first spring month is behind us, so its time we look back how warm/cold it was and what wasspecial about this month.

The pressure pattern for March 2020 was quite impressive. We had low pressure dominating the polar regions and a strong blocking high-pressure system in the North Pacific. Also noteworthy is the high pressure sitting over the southeast USA, which had an important role for spring advancement over the USA. 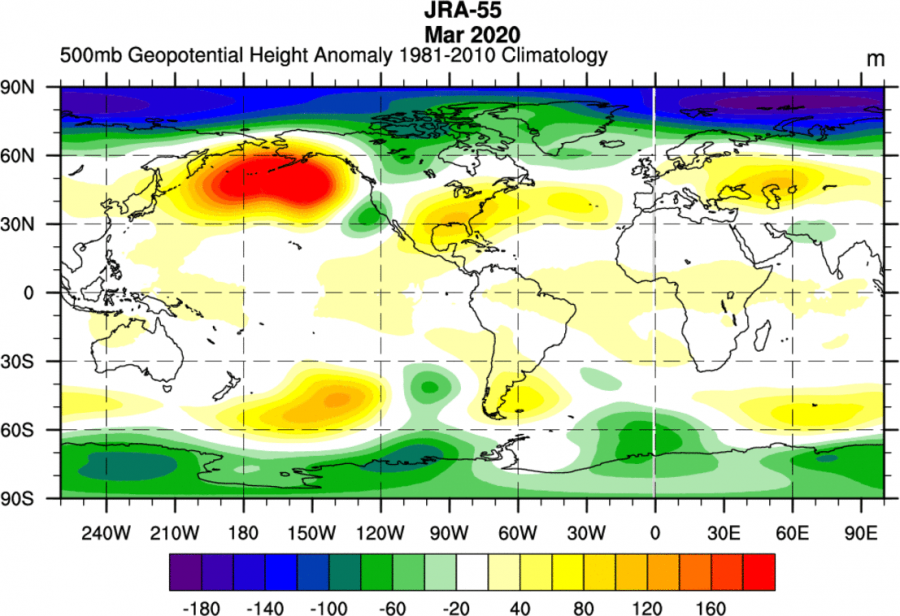 Temperature-wise, March 2020 was quite diverse. We can see on the global analysis graphic below, that eastern Europe and Asia were quite abnormally warm, continuing the trend from the winter months. The noteworthy colder exception was the Indian subcontinent. Western Europe was not as abnormally warm as during winter, and actually shows areas of below-average temperatures over Portugal and the British Isles.
In North America, we see much of the Continental USA (CONUS) abnormally warm, especially over the southeastern parts. As a contrast, temperatures were well below normal in the west/northwest CONUS, and especially in central and western Canada, extending into southern Alaska.
Also noteworthy are the cold anomalies in the subpolar North Atlantic, over Greenland and the Greenland sea. 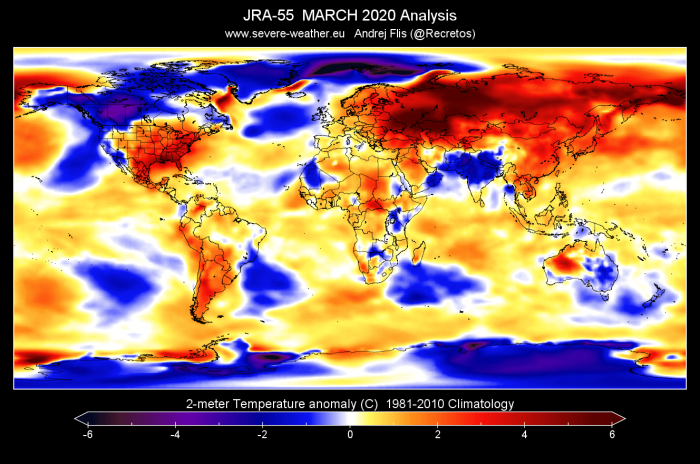 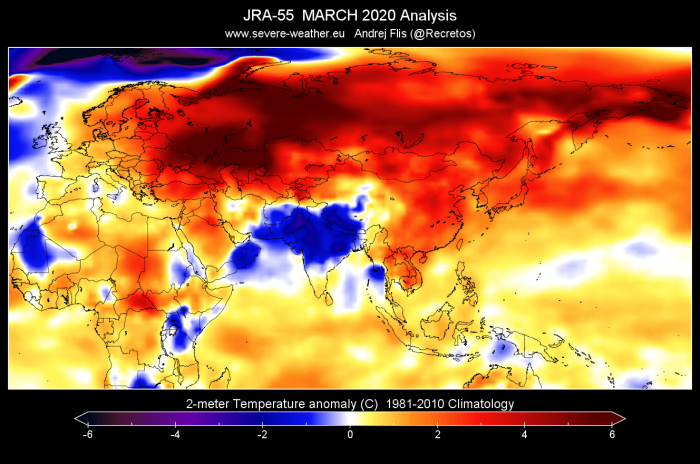 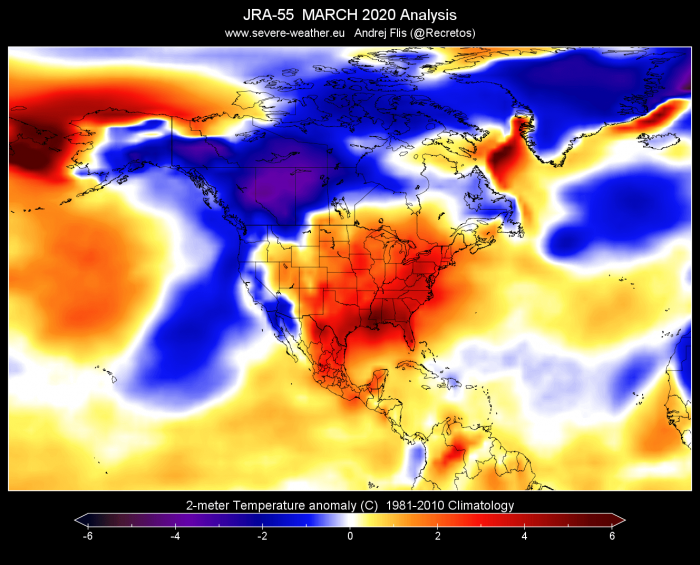 As reported by the Copernicus-EU project, global temperatures were much above average in March 2020. The month was:

The European-average temperature for March 2020 was quite high, but not exceptionally so. The month was: 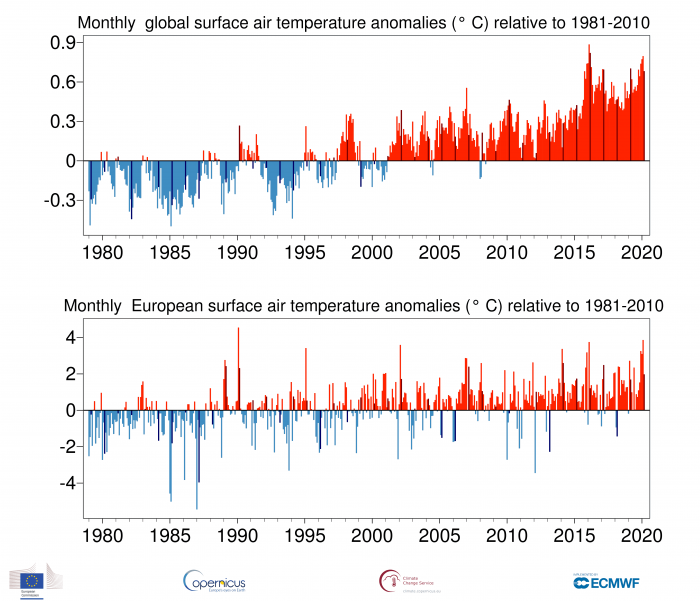 Precipitation distribution was also quite diverse, with above normal precipitation over the coast of Norway (due to zonal flow), Western Europe, Italy, and southern Balkans. March 2020 has brought a drier period to the British Isles, Eastern Europe and parts of central Europe. 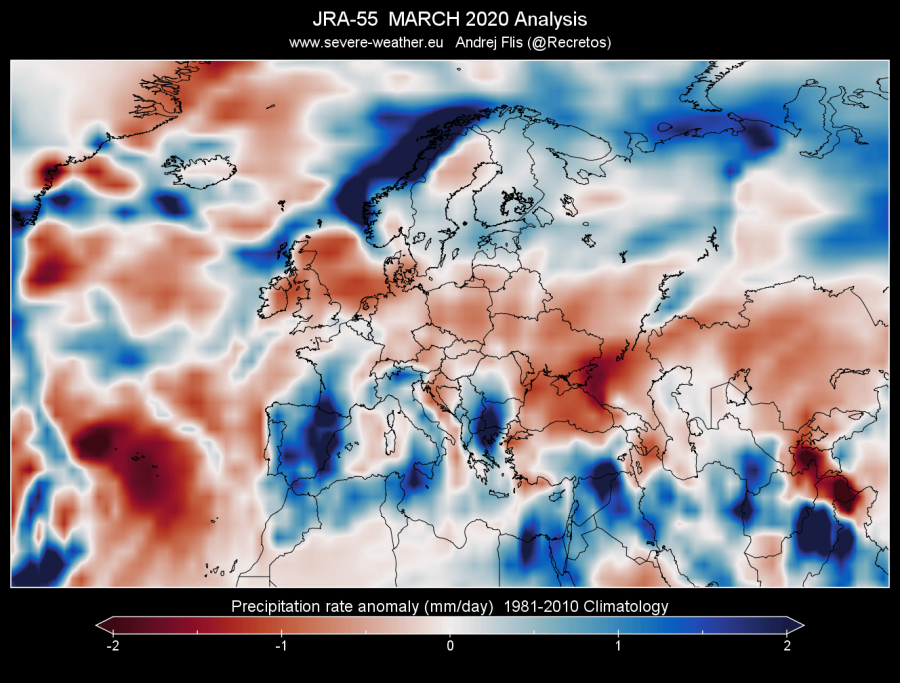 Over North America, we see above-normal precipitation over Northern Mexico, the southern and central parts of the continental United States and Alaska. As a contrast, there was a notable dry episode over Florida and the northwestern states of the USA.

The combination of warmer temperatures and above-average rainfall has influenced the springtime vegetation in the USA. The data from the National Phenology Network (NPN) shows (via spring leaf index), that spring has arrived over 20 days earlier than normal to a lot of areas in the southeast USA, and in some areas in the western states. 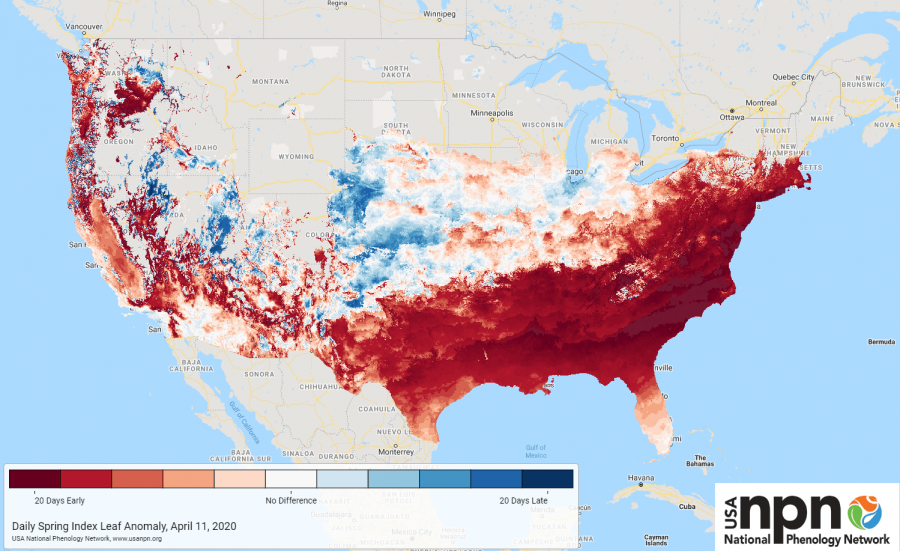 The analysis of the global ocean temperature shows warmer than average tropical regions, and two “blobs”, one cold and one warm. The cold blob is more famous and sits in the subpolar North Atlantic, where we witnessed a lot of cyclonic activity and strong winds, mixing the upper layers of the ocean. The warm blob is in the North Pacific and is partially a result of the large and strong high-pressure system prevailing over the area. 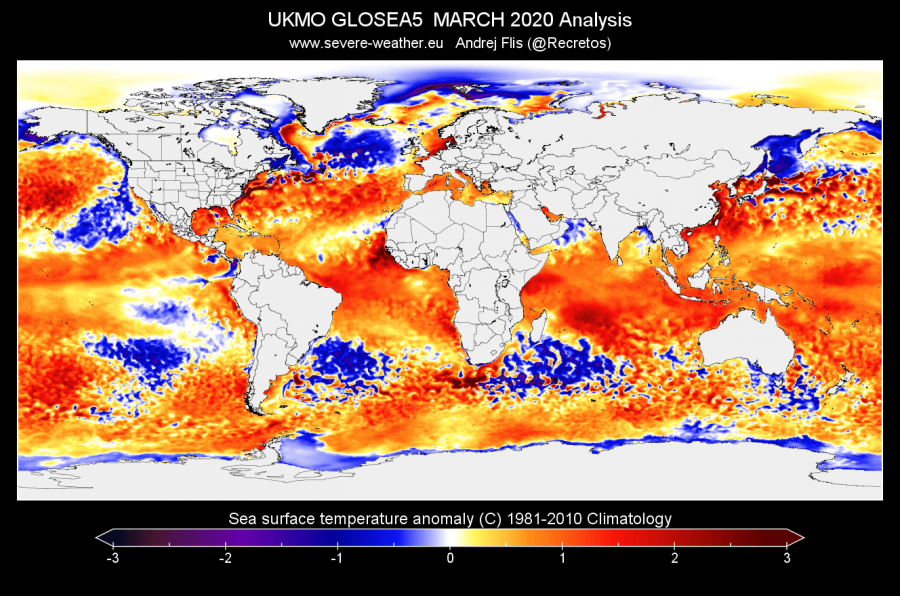 The state of the global ocean is very important. We discussed in-depth what these anomalies mean, and how they influence the seasonal weather development across the world.

Arctic sea ice concentrations were below average over most of the Atlantic sector, including the Labrador Sea, Greenland Sea and along the northwestern coast of Russia, as well as over the Baltic Sea. A notable exception was to the west and east of the Svalbard Archipelago, where concentrations were well above average and associated with colder than average temperatures over the area. On the Pacific side (Bering Sea and Sea of Okhotsk) positive anomalies generally dominated north of the ice edge, giving way to negative anomalies south of the ice edge. Graphic is produced by the Copernicus EU project. 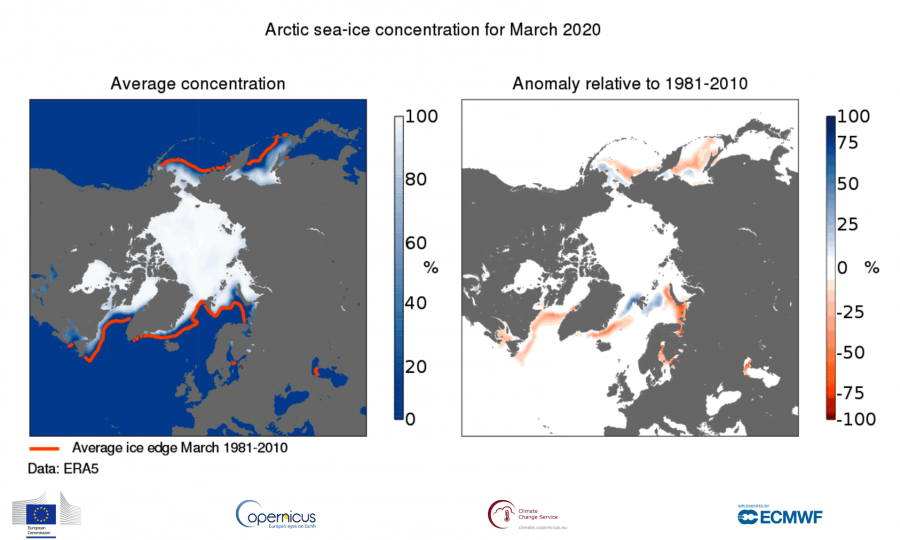 The average Arctic sea ice extent in March 2020 was 14.6 million km2, which is around 6% lower than the average March extent in the 1981-2010 period. This is only slightly above February 2020 measurements. This daily Arctic sea ice extent reached its annual maximum in early March. The March 2020 extent is above the values recorded in March during the past five years and virtually identical to the value for March 2014. Graphic is produced by the Copernicus EU project. 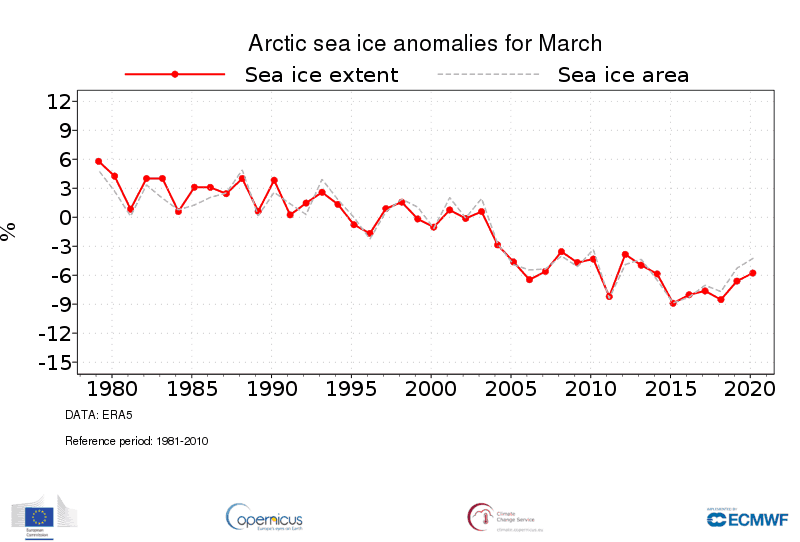