April is the second spring month, and that means warmer weather and longer days. But, the northern polar regions do not warm up so quickly and are still in the grip of winter, which tends to challenge spring in the southern regions, before saying the last goodbye.

Next week, two major things are going to occur. First, is the buildup of a strong high-pressure system in the North Atlantic, and the second is the strengthening of the high-pressure system in the North Pacific. That will ensure a sustained area of low pressure over the North American sector, more specifically over Canada. The low-pressure area will transport colder air down into the United States, bringing more winter-like cold to central and eastern parts, during the course of the week.
Over Europe. a cold front is expected to swipe across Scandinavia into eastern Europe, extending into parts of central Europe. 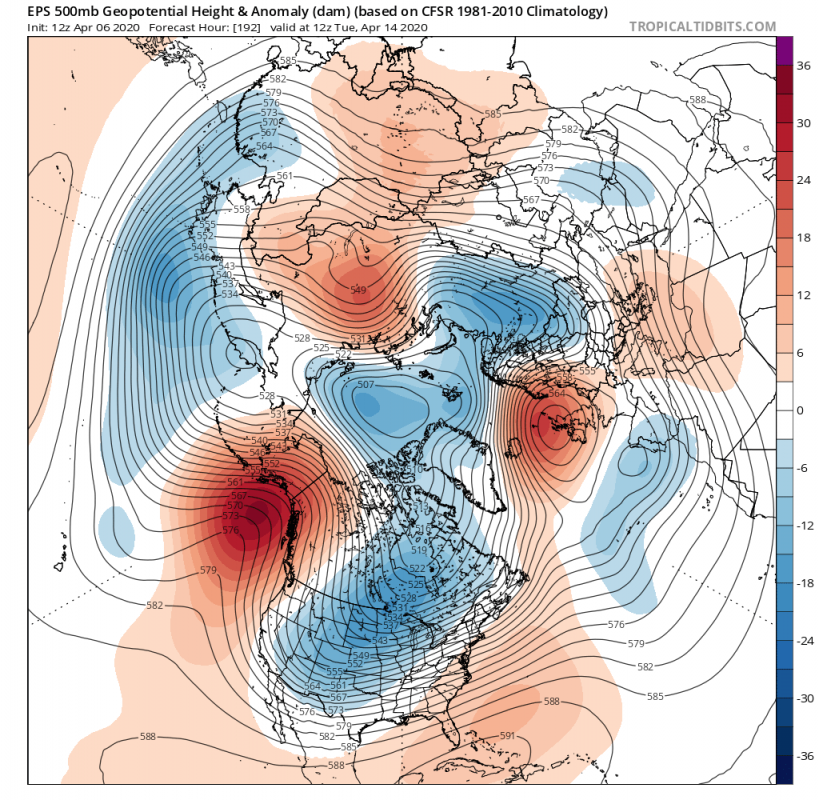 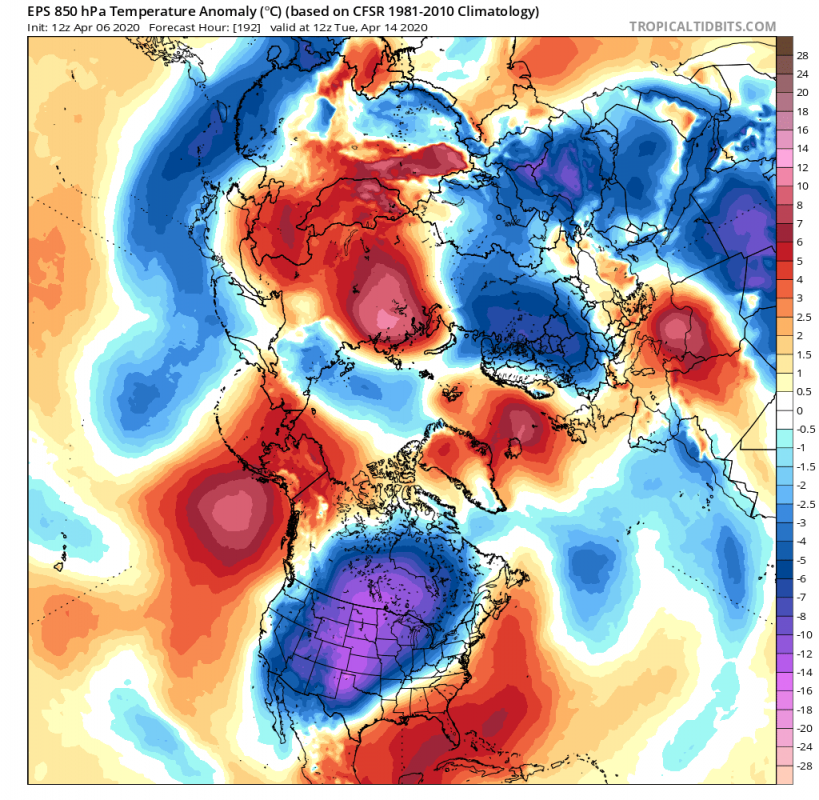 Later in the week, the Atlantic high-pressure system moves more towards Europe, bringing warmer airmass over the central parts of the continent, while the residual cold air moves further towards the southeast.
Over North America, the low-pressure system moves a bit east, along with the cold air across the CONUS. Most of the central and eastern parts of the USA are under unseasonably cold weather, while the far southeast remains warm. The air mass is cold enough for snowfall, with ground accumulations being expected across the midwest. 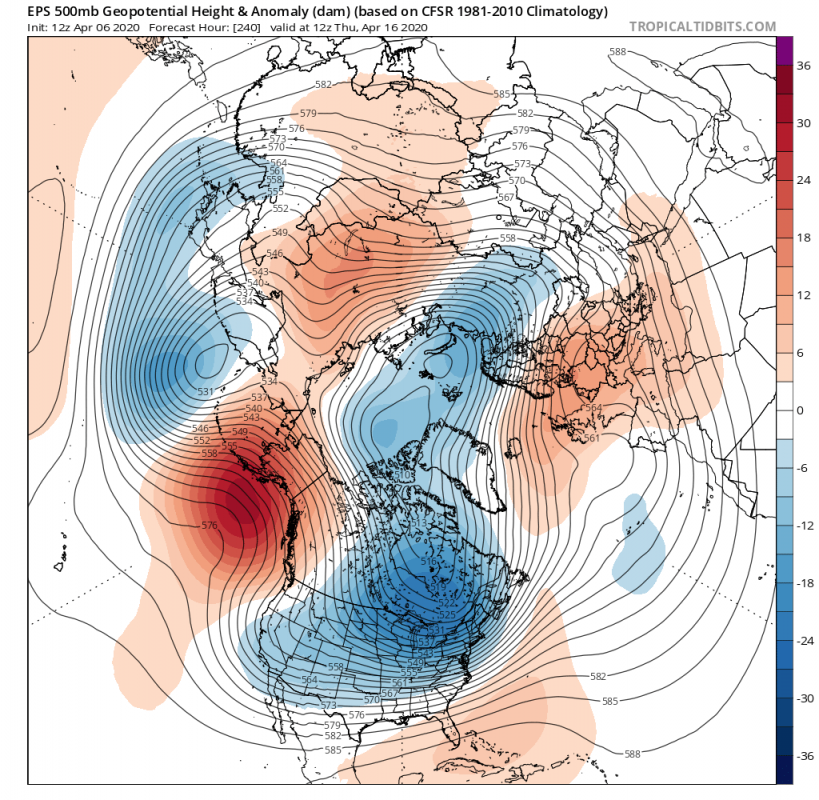 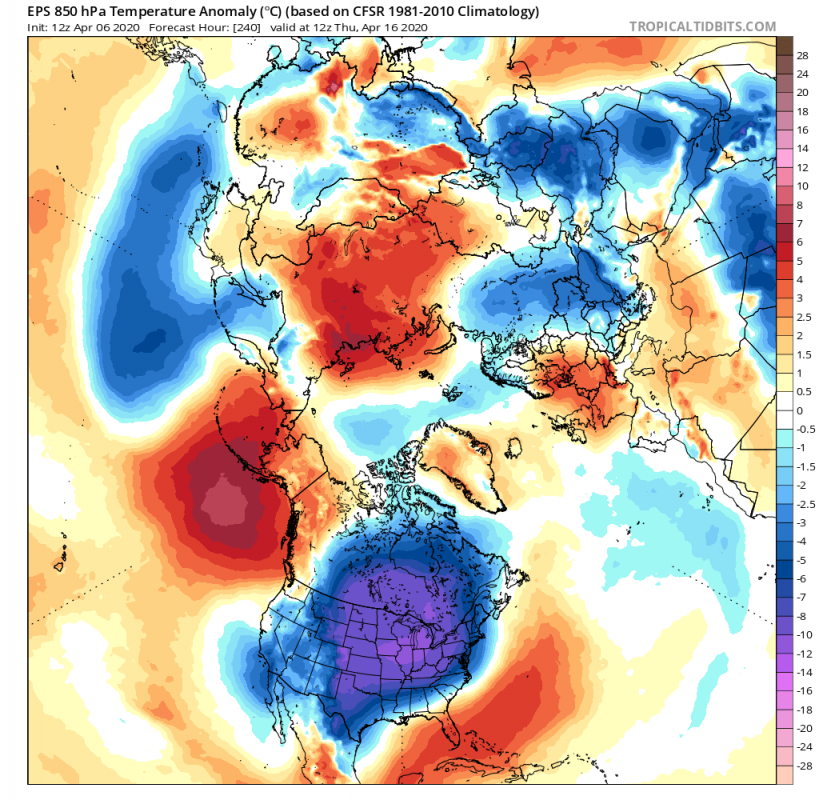 The high-low-high pressure trio from Pacific to Atlantic will likely form a quasi-stationary wave pattern. That will establish a semi-persistent pressure pattern by the end of the week, from the Pacific to the European sector, for a certain period of time. The cold air will move further east across the USA, moving further up to the northeast parts and into southeast Canada.
Over Europe, warmer air is expected, but the high pressure over the North Atlantic can enable periodic cooler or colder air spills across Scandinavia into the continent.
Of note, is the higher pressure area over Siberia, with abnormally warm weather. 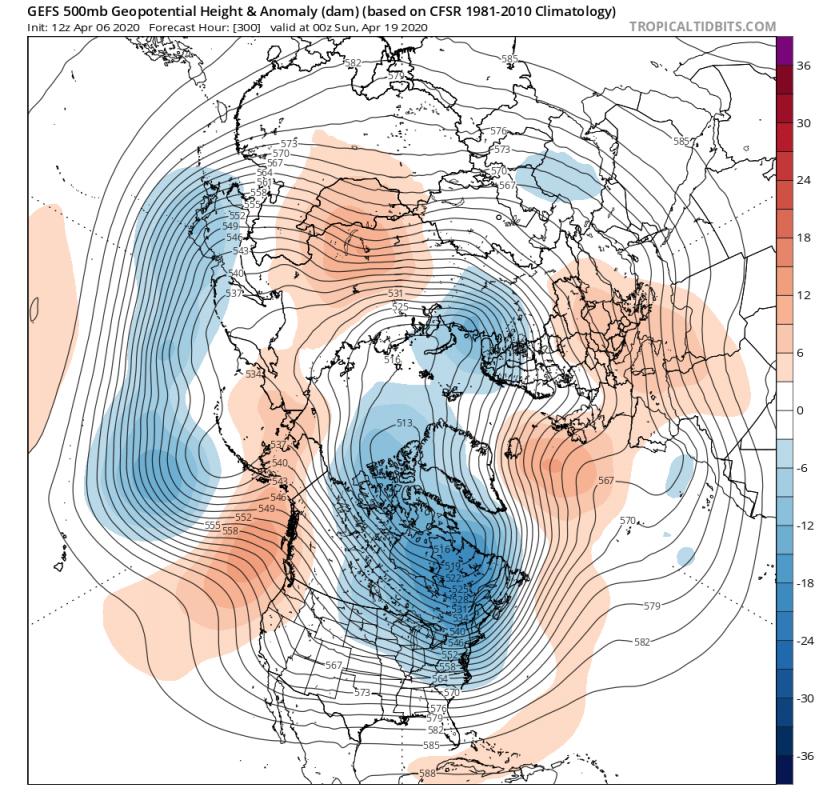 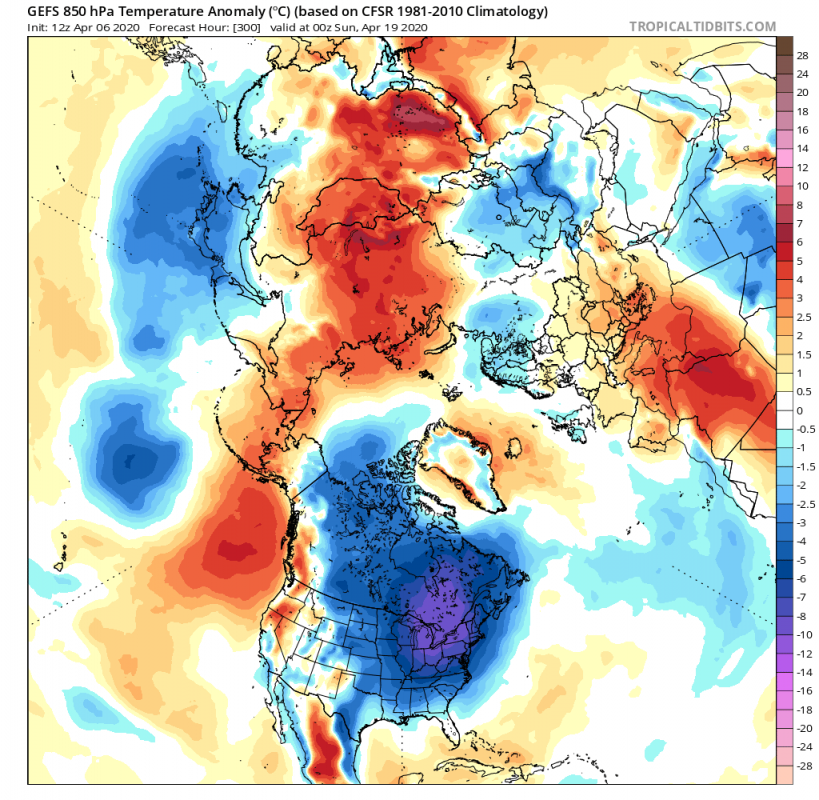 Going further into April, the confidence reduces. Models are not accurate so far into the future, and even the ensemble model forecast varies between individual models. But they all agree on the continuation of this high-low-high pressure wave from Pacific to western Europe. Colder air will remain over Canada, with likely periodic spills south into the continental United States. There is a lower chance of snow on the ground this far into April on the plains. But the Rockies will see more snow, and some accumulation can’t be ruled out for the northeast USA.

Over Europe, the situation depends a lot on the positioning and the strength of the high-pressure system in the North Atlantic. The likely scenario currently, is warmer weather across the continent, with occasional colder air intrusions from the north, across Scandinavia into eastern Europe and extending into the central parts. 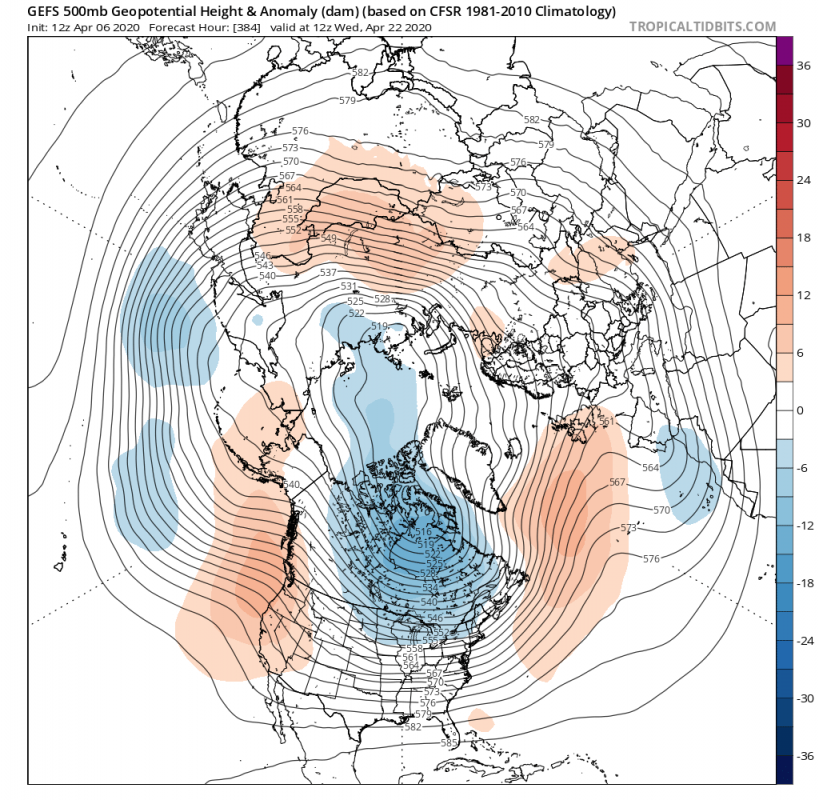 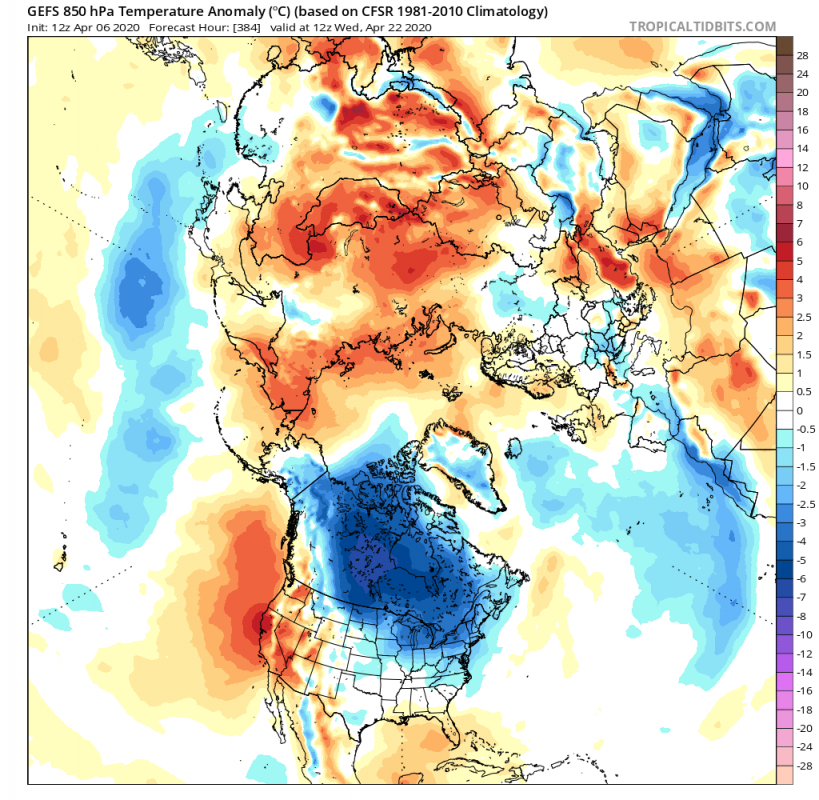 Looking at the CFSv2 weekly guidance, we can see this wave still holding on week 3 forecast, but starting to reverse going into May on week 4. The temperature forecast shows the colder air over North America, but also over Europe, due to colder air transport from the north over Scandinavia. 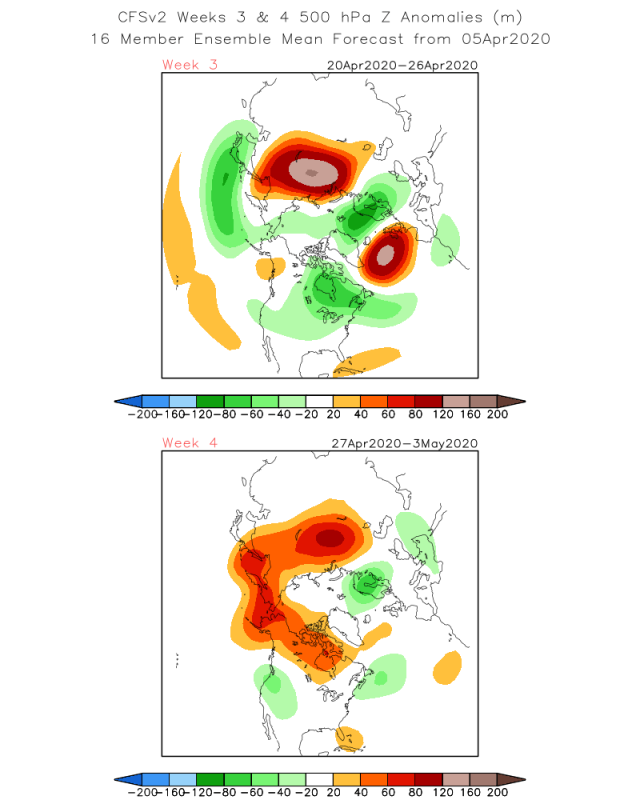 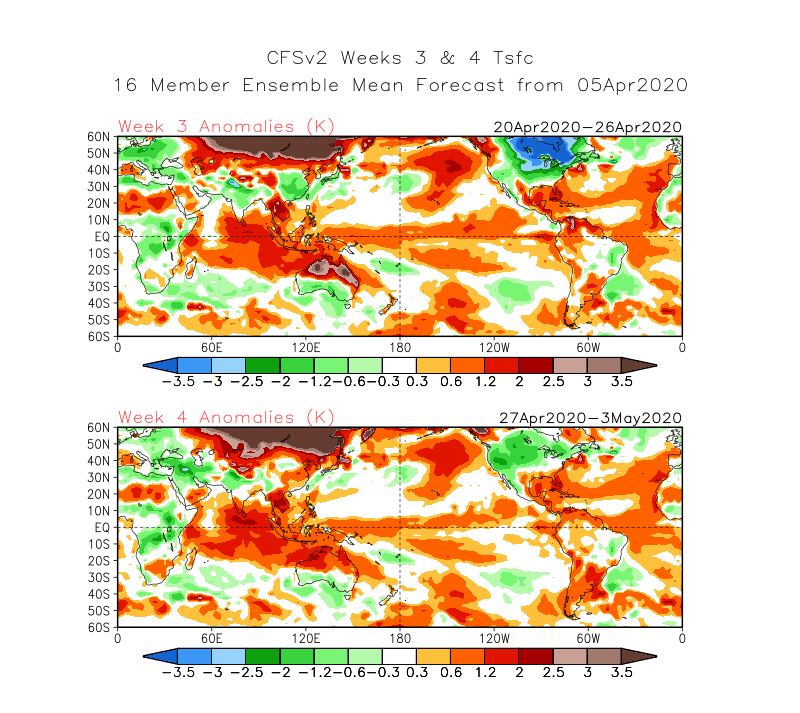 The weekly forecast from the GLOBO model also shows a very profound wave pattern from the Pacific all the way to Europe. It also shows the persistent colder air over the Canadian sector, acting as a source region for the cold air spills into the central and eastern parts of the continental United States. It is warmer over Europe, due to the positioning of the high-pressure further into Europe instead into the North Alantic. 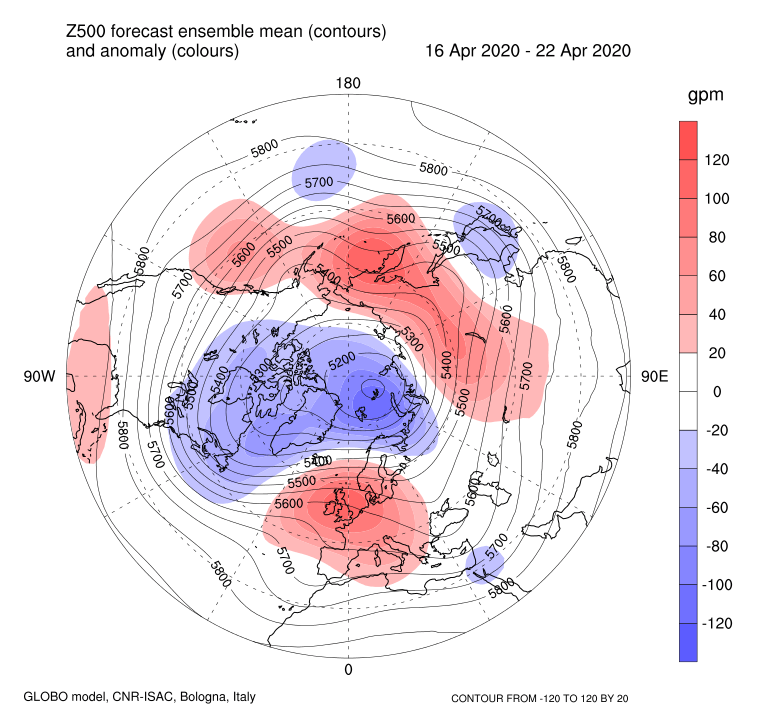 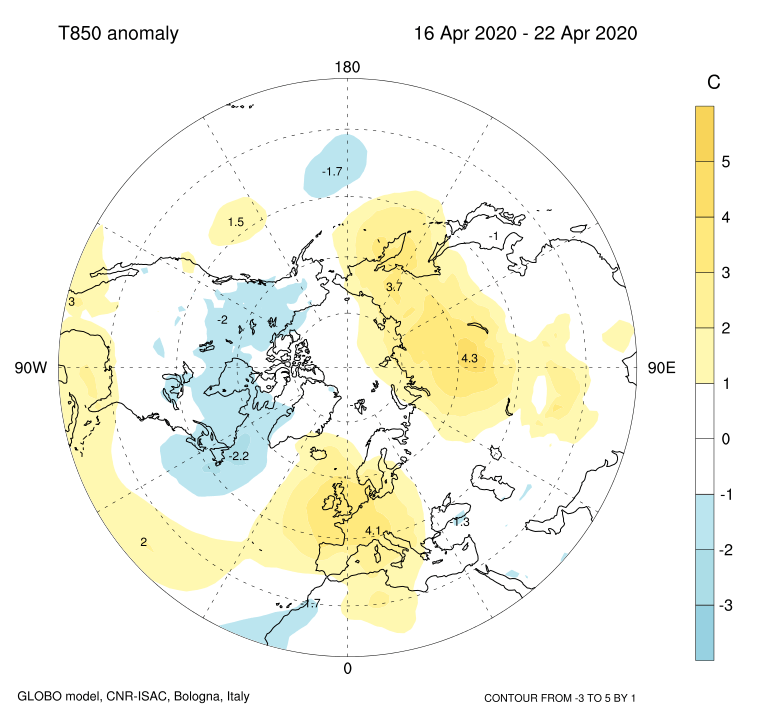 North America: High-pressure systems will dominate the North Pacific and the North Atlantic. In between, a low-pressure system will remain strong over the Canadian sector, locking down the cold polar air, aided by the snow cover across the country. This cold air will spill down into the continental United States, bringing unseasonably cold weather across central and eastern parts of the country, with the exception of the far southeast parts. Some snow accumulation can be expected across midwest and perhaps into northeast parts. But going into mid-April, only temporary snow cover (if any at all) should be expected in the lowlands, with the exception of the Rockies. Cold air intrusions are also important because in spring, they are a potential source of severe weather outbreaks across the plains. But while the low-pressure system dominates the Canadian regions and the eastern United States, the severe weather threat should be a bit limited, as the jet-stream positioning is not too supportive. We do have to note that the Gulf of Mexico is unusually warm for this time of the year, which means that there is always a chance of severe weather outbreaks when colder air masses from the north start to mix with the warm air masses from the south, coming up from the very warm Gulf of Mexico.

Europe: Europe will be mainly influenced by the Atlantic-Scandinavian pattern. A lot depends on the strength and positioning of the North Atlantic high-pressure system. The current idea is that the Atlantic high and the Scandinavian low-pressure areas will cause a pressure difference, which supports northerly flow into Europe, increasing the chances of cooler/colder air intrusions from the north, into eastern Europe, possibly extending into central parts. Depending on the positioning of the Atlantic high, UK and Ireland could also see some colder air from the east, but noting winter-like is to be seen for now. We are going further into April, and there are warmer and warmer air masses moving over the continents of the Northern Hemisphere. But the polar regions are still cold and wintry, so fast pressure changes can transport unseasonably cold air into Europe.

We will keep you updated on any important further development. While you wait for more updates, don’t miss the latest global ocean analysis, which revealed 3 important areas, that will impact the weather in the coming months and seasons:

Global ocean analysis reveals three anomaly areas, which will have major impacts on weather in summer, hurricane season and even next winter!