After the jet stream persisted well into the Mediterranean basin for weeks, the dismantling of the Rossby wave is just taking place. Now the weather pattern in Europe tends to reorganize rapidly. In the coming days, the embryo of what will become a powerful blocking high will begin to take shape. The NAO index is temporarily rising, but simulations see it decreasing again in the second half of December. The increasing likelihood of widespread cold outbreaks over Europe in the Christmas week.

The deep wave into the Mediterranean Basin, delivering cold weather into the region with frequent storms, widespread precipitation, and a lot of snow in the Alps, is on its way to leave Europe, at least for a while.

The two main global weather models are in perfect agreement now and the synoptic evolution of the upcoming week is set. Both ECMFW and GFS models agree in seeing a powerful blocking high emerging and rapidly strengthening from Monday to Wednesday. 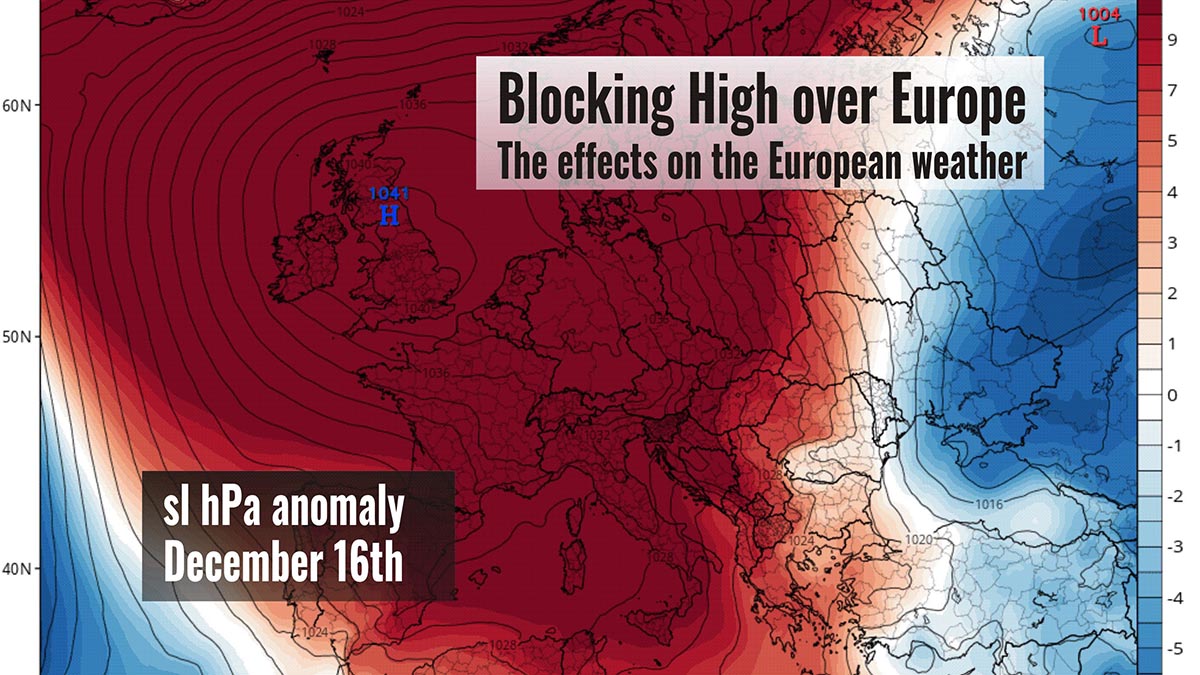 The low now affecting mainly central and south Italy and the Balkans will rapidly move towards Albania and Greece. Residual precipitation, mostly in form of snow in the Balkans, will last until Tuesday. Then, the low will partially re-organize over Turkey in the second part of the week, thanks to a new cold boost from the Baltic starting from Friday 18th.

In the first phase, both the European ECMWF and the American GFS models are very much in agreement in seeing the same evolution of the Atlantic High. It will tend to strengthen rapidly as it moves north-west, positioning its center between the UK, the Netherlands, and northern France.

With the powerful push of the jet stream in the Atlantic south of Greenland, where winds will be between 300-350 km/h at the geopotential height of 250 hPa (Roughly 11 km), the deepening of the upper wave will form a powerful High over the UK, peaking next weekend, December 17-19th.

In fact, once established over France on Wednesday and Thursday, the developing blocking High seems to gradually strengthen moving north and does not appear to have any intention of changing its range of action until at least the next week. This will help deliver more cold from the East towards the southern Balkans, Greece, Turkey, and western North Africa from Friday. 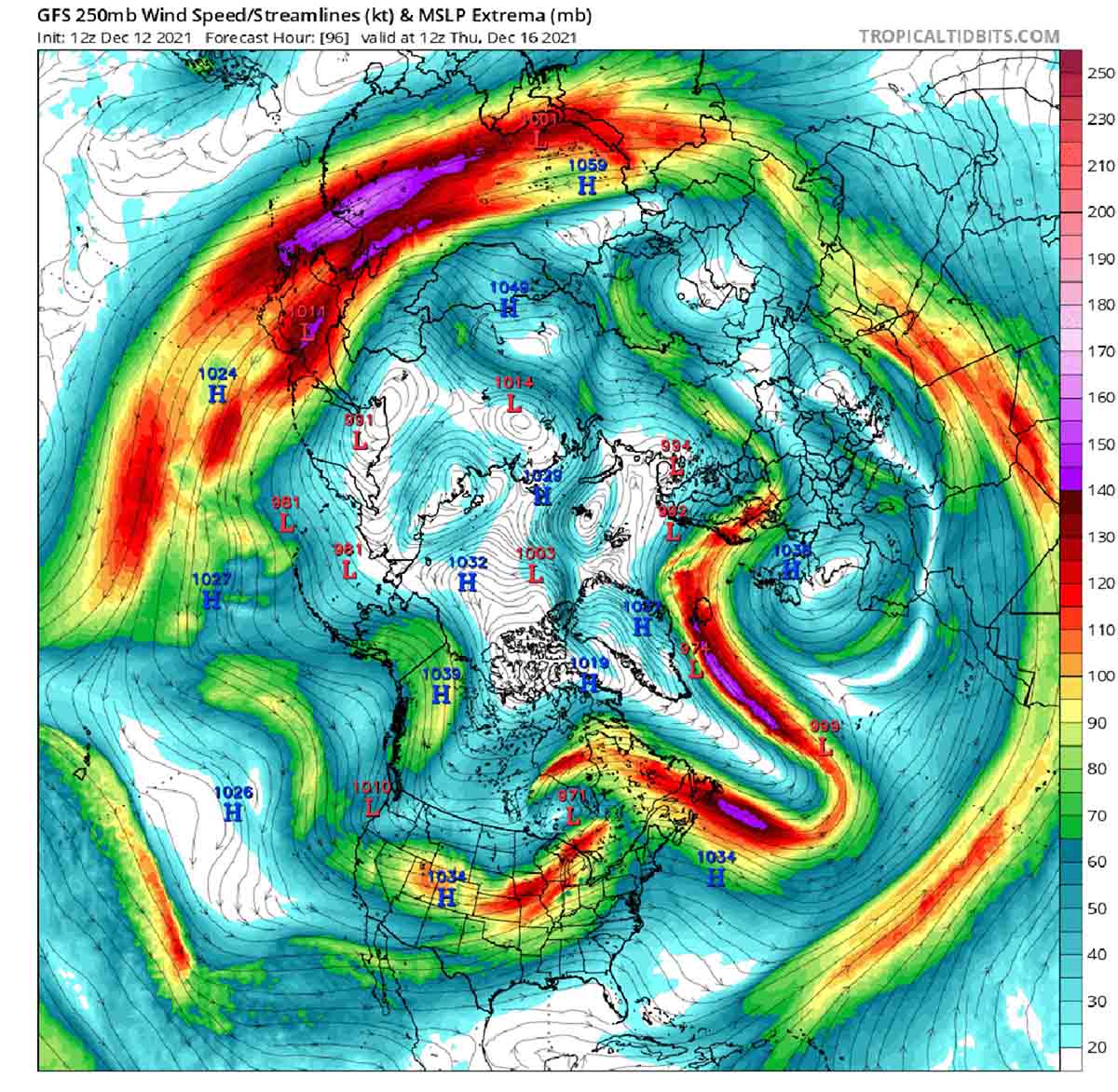 At the same time, the omega blocking High will push the Atlantic storm track north of Scotland into western Norway. Fronts will be not affecting Central Europe for a while though, while Scandinavia will experience the effects of a short but intense positive NAO phase.

This will allow the polar jet stream to rapidly drop in latitude later next week, likely invading again the Mediterranean, but this time with an eastern pulse from the Balkans. 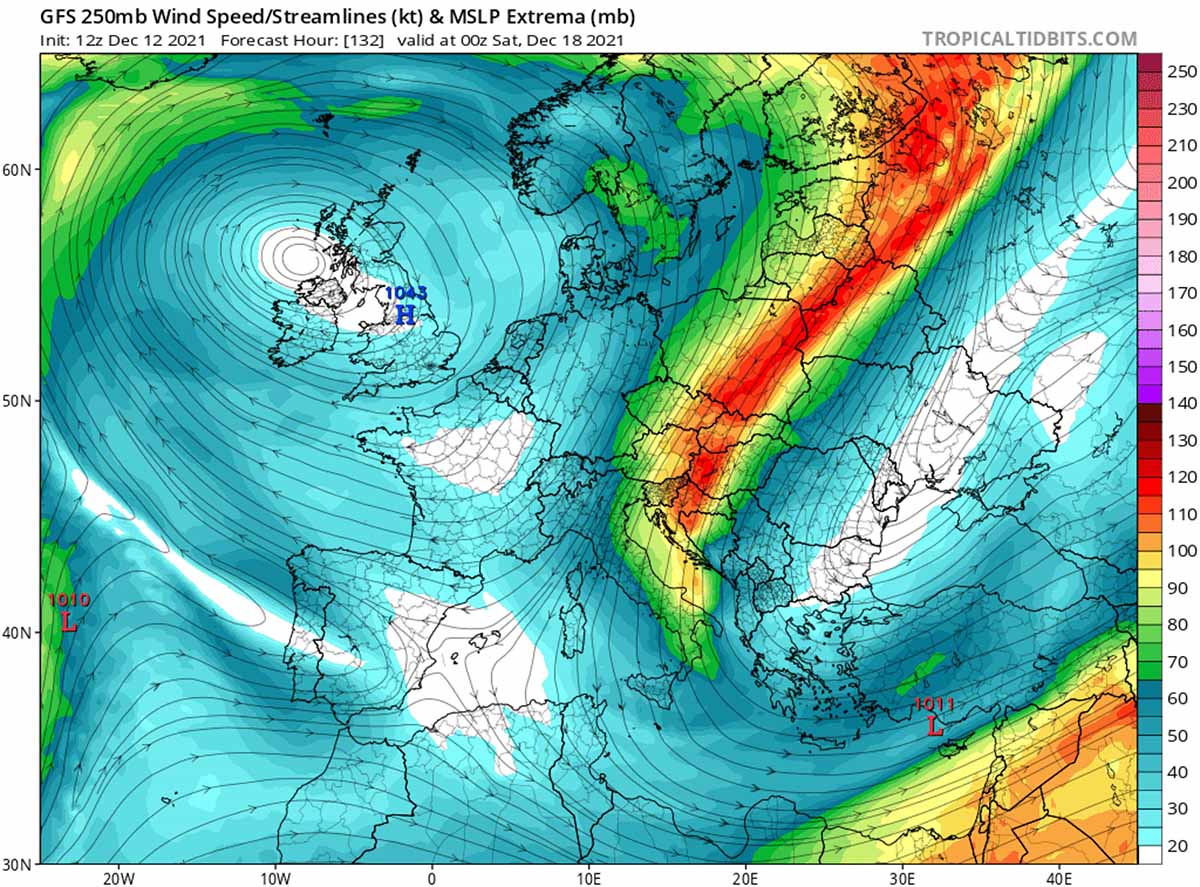 The dynamic upper wave of the jet stream will change the shape and geometry of the blocking High very soon. The main axis will move clockwise from West-East Wednesday into North-South Friday. Albeit weakened, the High will remain still well developed to block the zonal flow for a while.

It will be crucial, proceeding towards the Christmas week, the fate of this blocking High in allowing the ingression of cold air from East. A strengthening of the High further North towards the Faroe Islands, would be the first step at the right moment for a possible cold outbreak over Central and southern Europe towards Christmas.

Residual orographic precipitation due to the stau effect will take place mainly in Austria early this week, while the quite deep low over Greece and Turkey will allow frequent rainfalls in that region and main snowfalls in the central and southern Balkans.

Precipitation over Scotland will likely end on December 16th when the upper High will move its center to England, while heavy rain and snow will affect southern Norway. After the 16th, precipitation in Norway will move further north, while the Mediterranean low will deepen again although not as low as before thanks to a cold boost from the East. It will likely reach values as low as 1008 hPa at its center. Frequent precipitation and showers are expected again in the region. 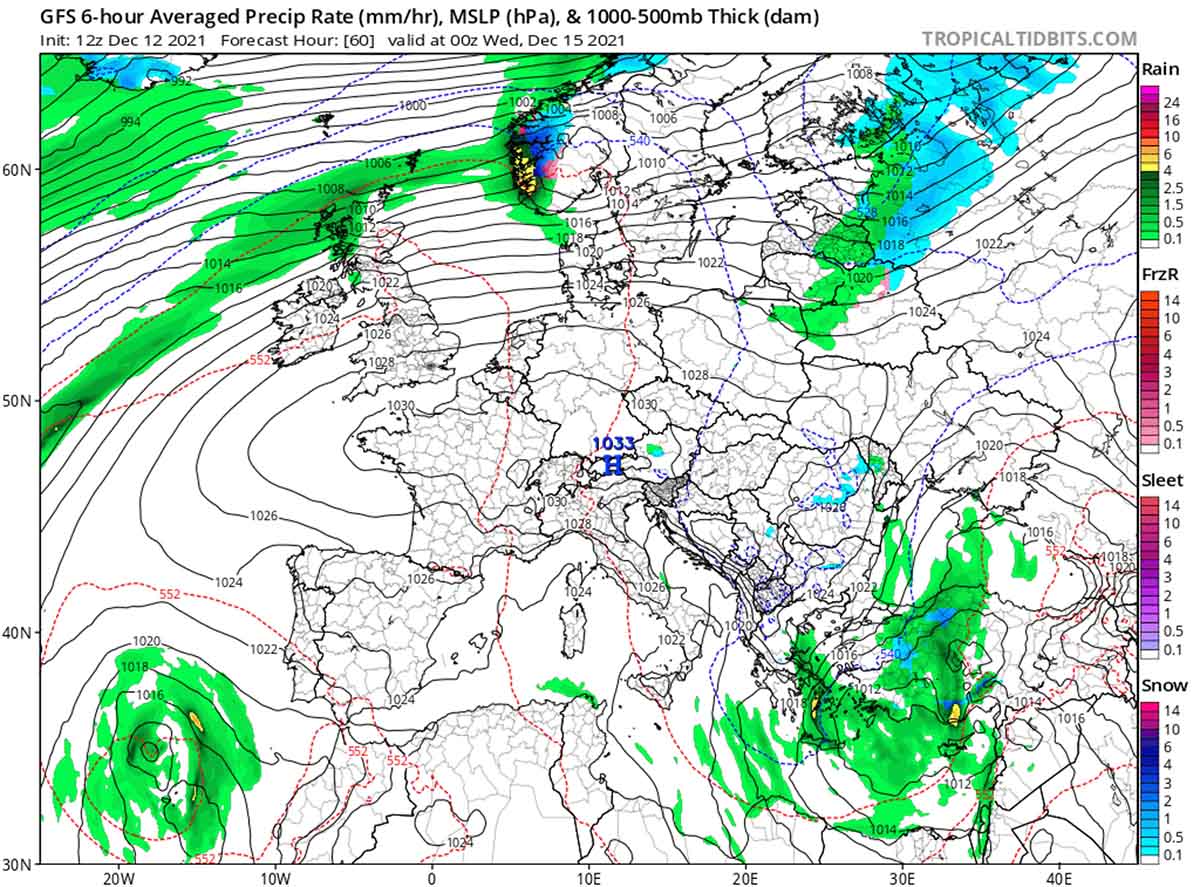 A very deep low is likely to form over western Russia on Sunday 19th producing harsh conditions in the region. Snow could be heavy at times, so significant wintry conditions could be eventually expected. Especially as deep low will also contribute to the strengthening winds, blizzard conditions are likely as well. Travel disruptions can be expected together with extreme wind chill. 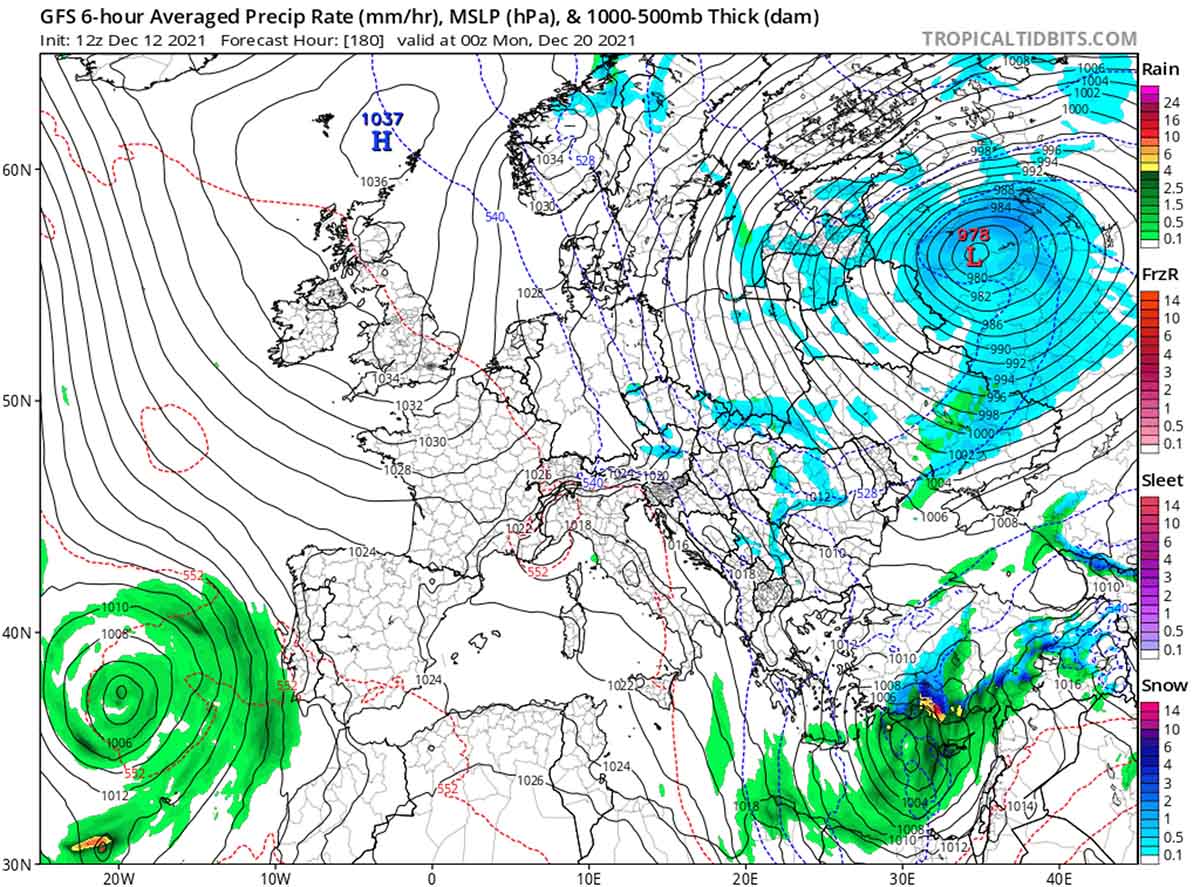 The temperature will rapidly raise early this week, especially at high altitudes and over Spain, France the Netherlands, and Germany. The freezing level in the Alps will jump up to about 3000m by Wednesday but thermal inversion will take place in the alpine valleys. Here, thanks to the recent fresh snowfalls and the low temperatures favored by the albedo feedbacks, fog, and low clouds will likely produce persistent freezing conditions for several days. 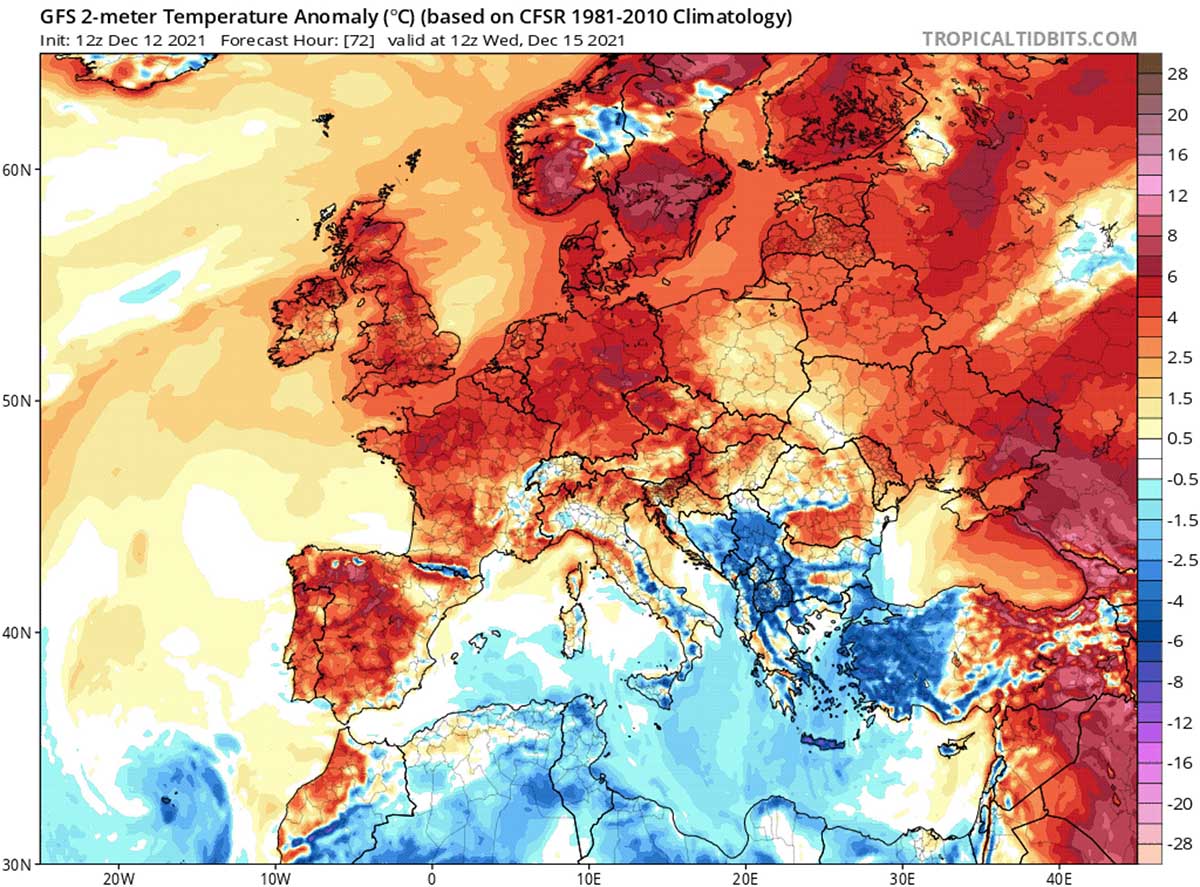 The below-normal temperature will continue for the Balkans, central-southern Italy, Greece, and western Turkey as well as North Africa for the whole week. South Norway will also experience below the normal temperature at times due to thermal inversions. 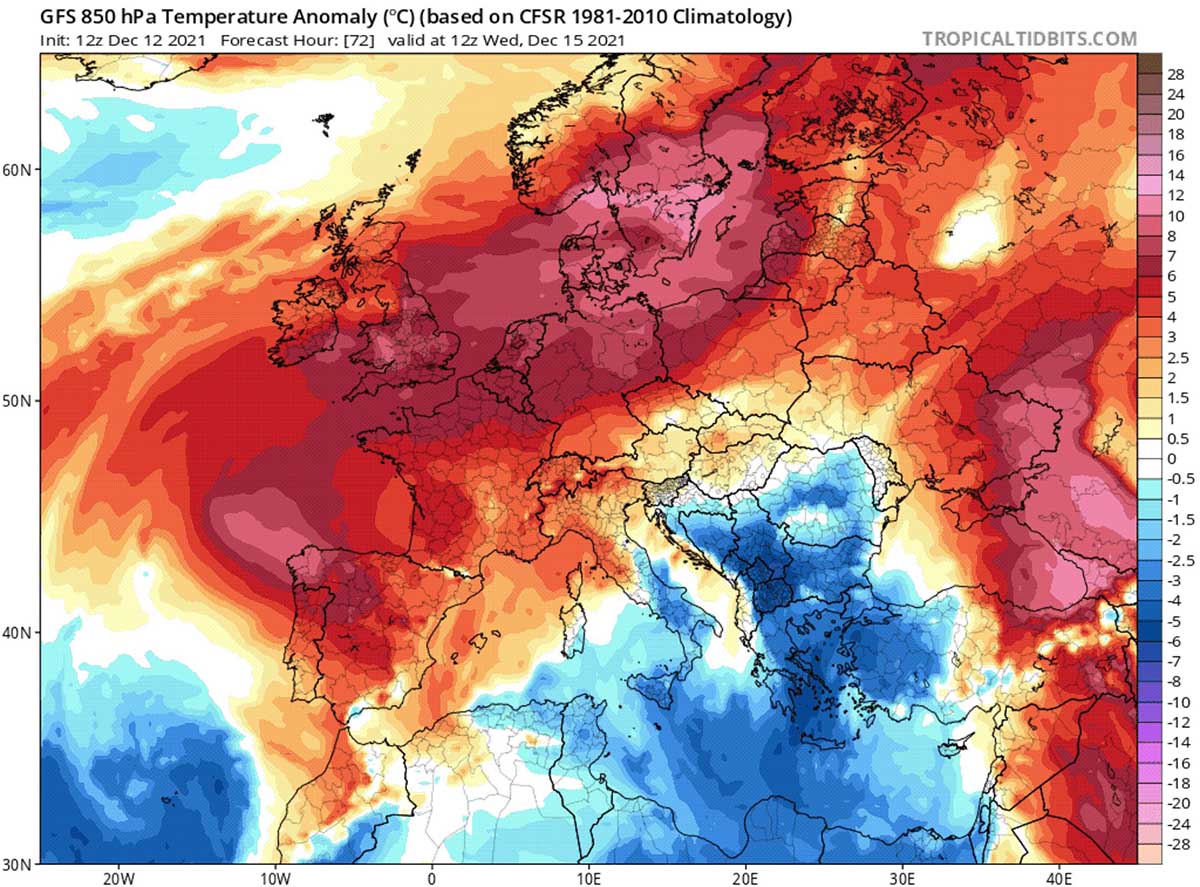 Eventually, during the next weekend, the new cold outbreak from the East will drop temperatures as low as 8-10 degrees below normal in the whole Balkans, Greece, central and southern Italy. Snow showers at low are expected. On the contrary, northern Europe will experience widespread positive temperature anomalies as high as +14°C in southern Scandinavia. 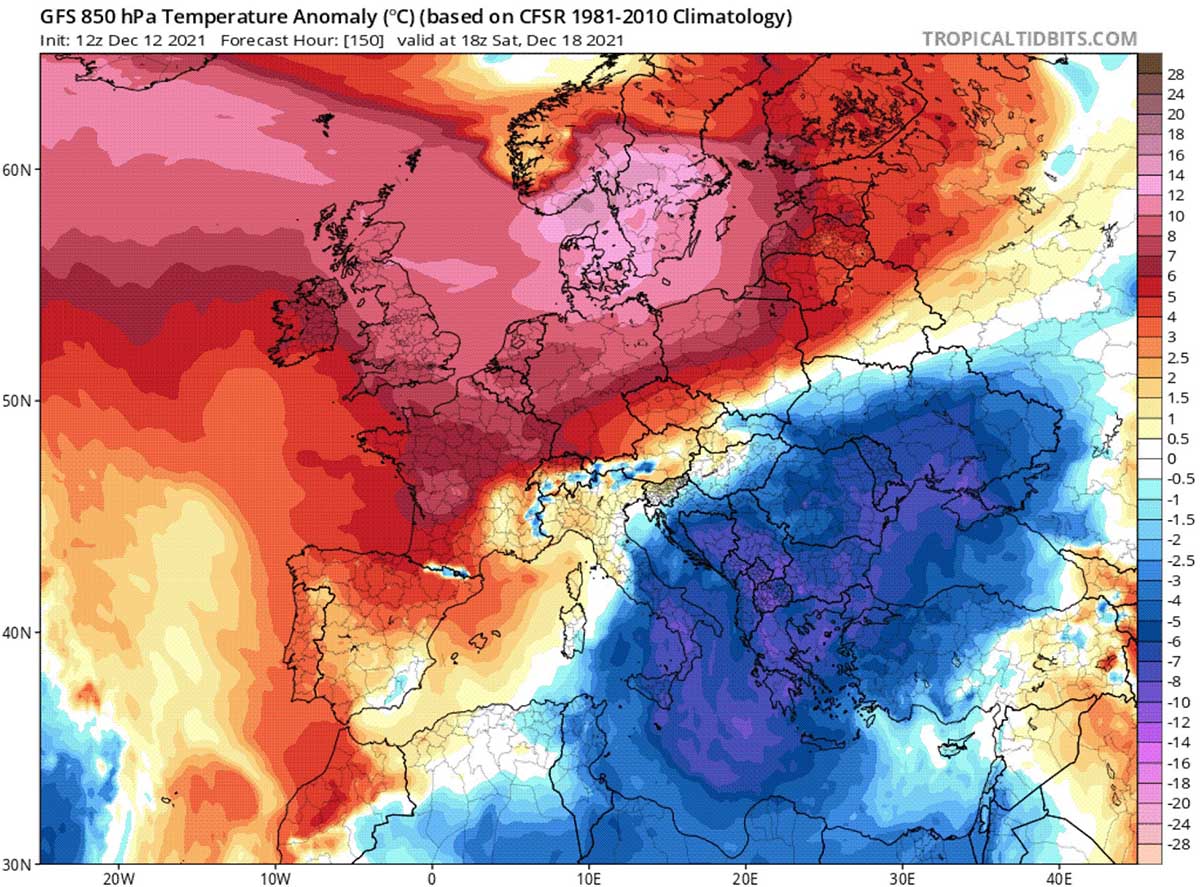 No chance of snowfall for several European countries and the Alps for the whole week. The only weak residual orographic snowfalls will affect central Austria early this week north of Karavanke. Quite a lot of snow is forecasted for the Carpathian mountain later next week into the weekend, as well as in the Balkans, Turkey, and the mountain of Greece.

Heavy snow will affect western Norway and Iceland due to the blocking of High deflecting north the Atlantic fronts. Here, snow depth will possibly exceed 100 cm before Sunday 19. Blizzard conditions are likely to develop in western Russia during the next weekend. 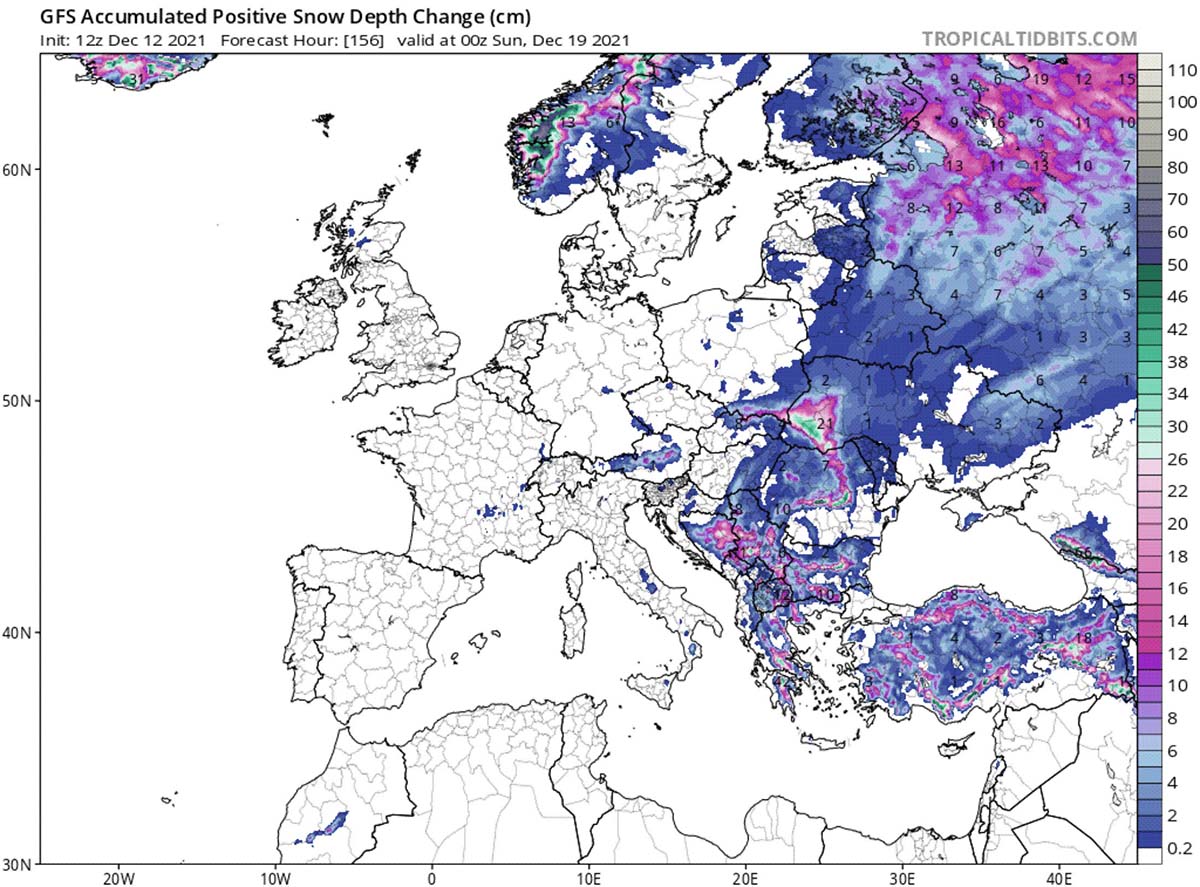 The synoptic configuration discussed above is confirmed by the rapid rise of the NAO (North Atlantic Oscillation) forecasted for this week.

In the image below provided by NOAA’s Climate Prediction Center, the NAO index appears to return to negative values soon after the 16th and in the second half of the month. This circumstance further suggests that the blocking High could rapidly evolve towards a more typical negative NAO index phase. The likelihood of cold outbreaks in the next 10 days over Europe increases. 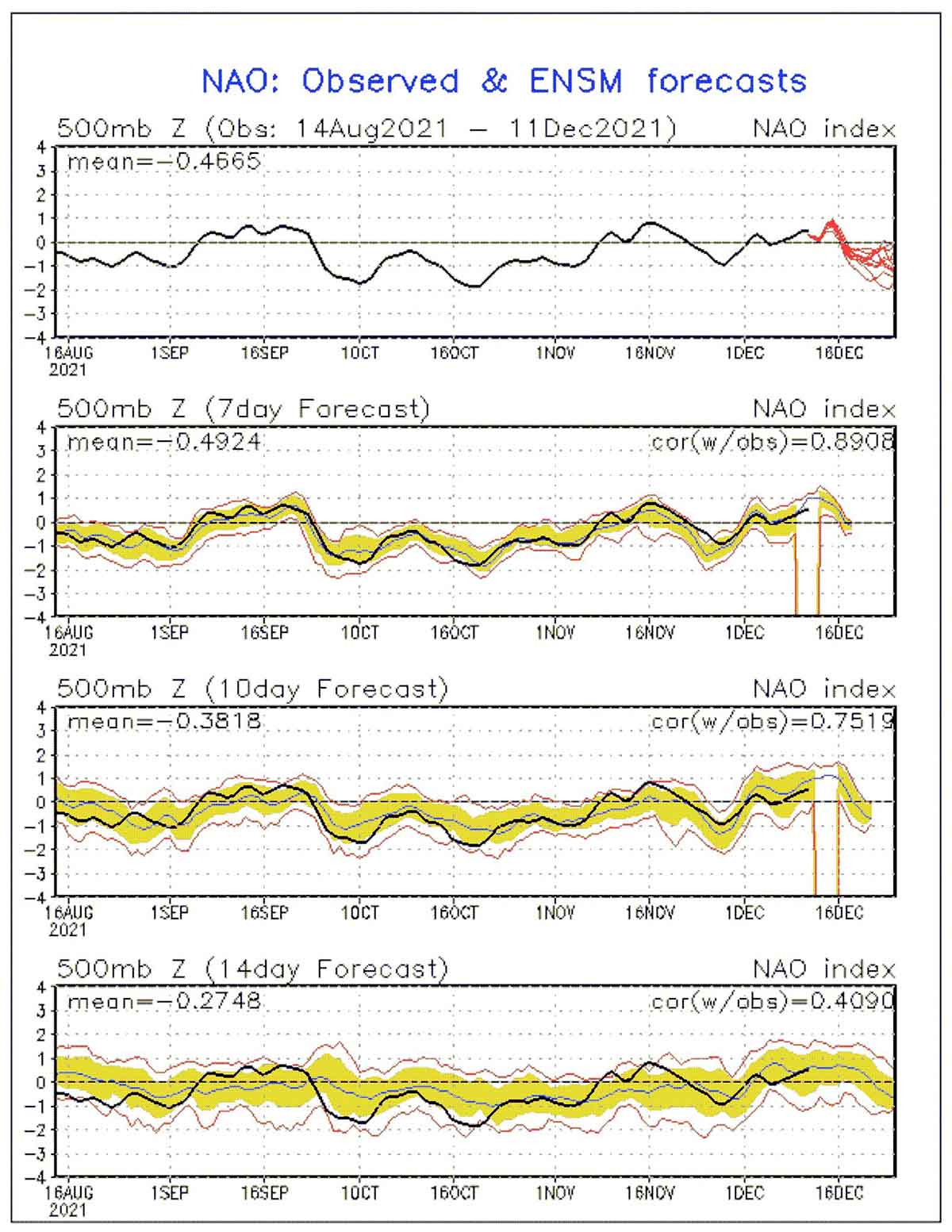 Indeed, at present, the most likely evolution of the powerful blocking High, suggests a flow of cold or very cold air on its eastern side, right during the Christmas week. The action of the two lows west and east of Europe, which are going to push from both sides at the same time the blocking High over the UK, might help the development of this specific weather pattern.

Both the GFS and the ECMWF models see such a pattern developing starting from the beginning of week 51-2021, December 21st.

The maps shown and discussed in this article are taken from the tropicaltidbits.