It has been a while since there was any significant North Atlantic storm activity, but it’s time for changes. A large extratropical low over the Atlantic develops snow to Ireland but especially extreme snow over parts of Iceland. The European continent remains under the effect of deep freeze, spreading south, a major snowstorm heads for Greece this weekend.

Almost a month has passed since the last, significantly deep Atlantic storm that hit Europe – that was a Gaetan storm in mid-January. Today (Friday), satellite imagery revealed an impressive large North Atlantic storm, fully developed and dominating the region.

It is moving towards the north very slowly, thanks to the very large and strong high-pressure system over Europe. Responsible for the deep freeze and widespread wintery conditions. The deep freeze was first ongoing across parts of Benelux, Germany into Poland and the Baltic region, then also spread south into central Europe and the Mediterranean since a mid-this week. 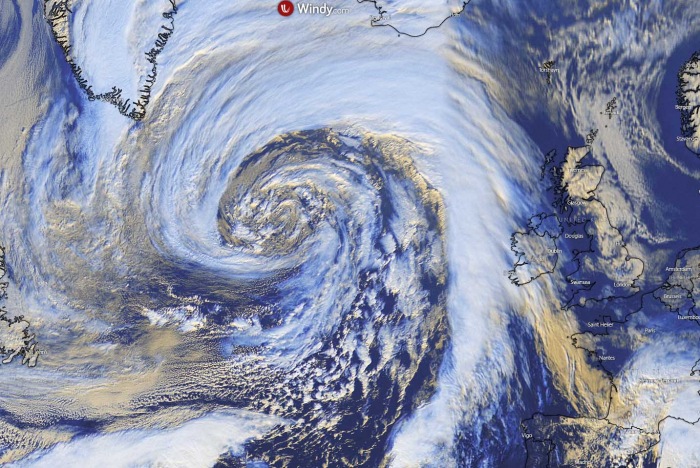 This Friday, the temperature picture across a large part of Europe is quite wintery impressive. There is a deep freeze spread across northern and eastern Europe, now gradually expanding across central Europe and already reaching the southern Balkan peninsula. It’s been quite cold also across Western Europe.

Temperatures are very cold actually. With morning lows coming down as low as -15 to -20 °C, even lower locally. In parts of Scandinavia in particular, with some days even going below -30 °C. Strong to locally severe winds are making it even more frigid in some regions, like over the western Balkans with hurricane-force Bora wind gusts along the Adriatic coast. 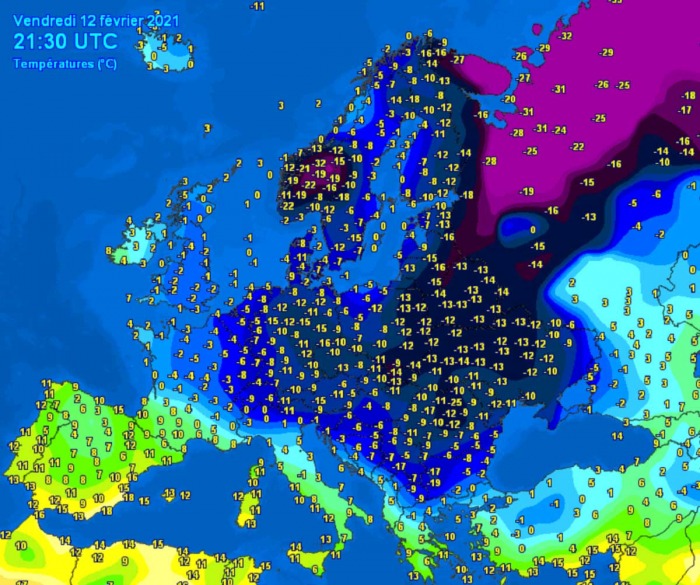 The next in line of this cold outbreak over the weekend will be the Mediterranean, Greece, and Turkey. The latter will see some considerably deep snow cover until Monday. Haven’t you missed it? Now it’s your turn.

The coldest air mass will remain across much of Europe into the weekend, covering most of western, central, and eastern Europe. It will be warmer only in the southwestern parts. We can see how the air mass is pure Polar, continental, advecting from Arctic Russia into eastern Europe and further west and south. A so-called Beast from the East. 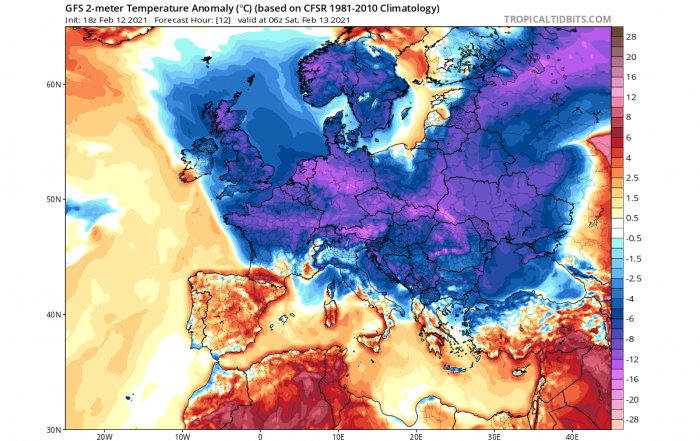 Also thanks to the large Atlantic low which gradually spreads the warmer air towards Iberia and Ireland until Sunday.

The developing Mediterranean frontal system will develop a major winter storm and heavy snowfall with blizzard conditions across the southern Balkans, especially over Greece and western Turkey. Up to 50 cm of snow will accumulate by Monday, even more locally.

On the other hand, the deep Atlantic storm will push high moisture towards Iceland and introduce extreme snow with totals up to 3 meters over the next 5 days!

The central pressure of the low has bottomed out at 952 mbar by Friday morning local time (06 UTC), reaching its peak and mature stage of the system. Below is the pressure analysis sequence based on the OPC (Ocean Prediction Center) by NOAA:

As we can see, the extratropical low has peaked this Friday morning, with the lowest pressure just shy above 950 mbar. There was a quite rapid development from Thursday into Friday, with the pressure drop of 34 mbar over the 24 hours period, between 00 UTC Thursday and Friday 00 UTC. That is actually well above the threshold for bombogenesis. 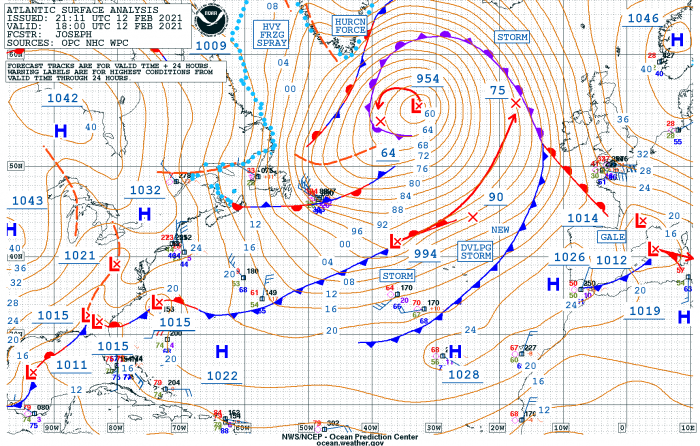 The central pressure has then begun gradually rising through Friday evening, but the system remains very large and moving towards the north-northwest with only small progress. Being surrounded by strong blocking Highs, not letting it shift anywhere. 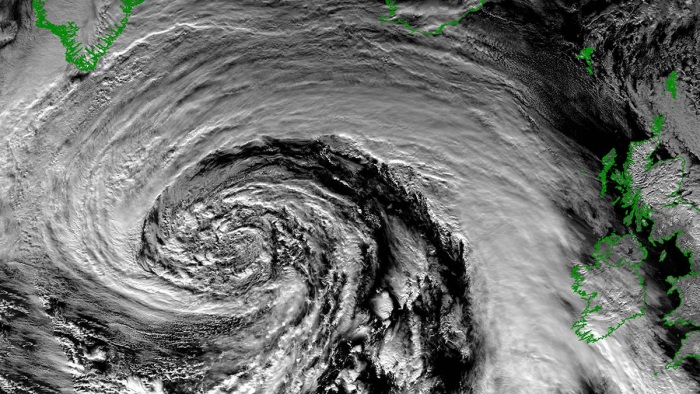 In other words, this hints at the gradual weakening of the low over the weekend as the storm will literally kill itself with time.

90 mbar BETWEEN EUROPE AND ATLANTIC

The satellite imagery this Friday has revealed a very impressive structure of this new large Atlantic low. The mature stage has shown a very large core, surrounded by a broad cold maritime air mass. Thanks to the very strong high-pressure system over the European continent, the low remains over the Atlantic and doesn’t move east much. 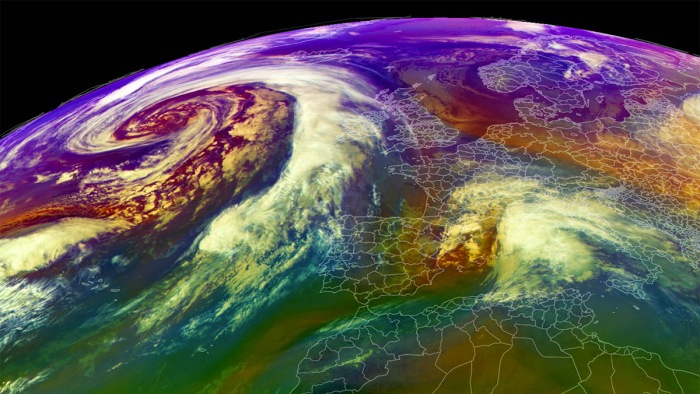 That is around 90 mbar pressure difference between the two. And also the size of both systems is very large. No doubt those two are playing the main role in the European weather this weekend. 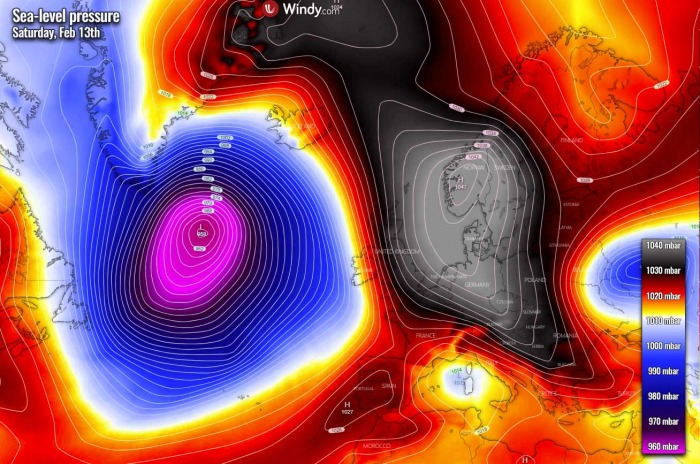 The pressure gradient is strong across the Ireland and UK, with near 1012 mbar in western Ireland versus 1036 mbar in eastern England (as of Friday evening). A strong southerly jet stream is spread in between the two systems.

The winds, however, will not be very significant as the storm is covering a large area with a very large core. The most intense winds will be ongoing along the southeastern tip of Greenland due to the strong pressure/temperature gradient between the Atlantic and the mountains. The strongest gusts could reach up to 110 mph there. 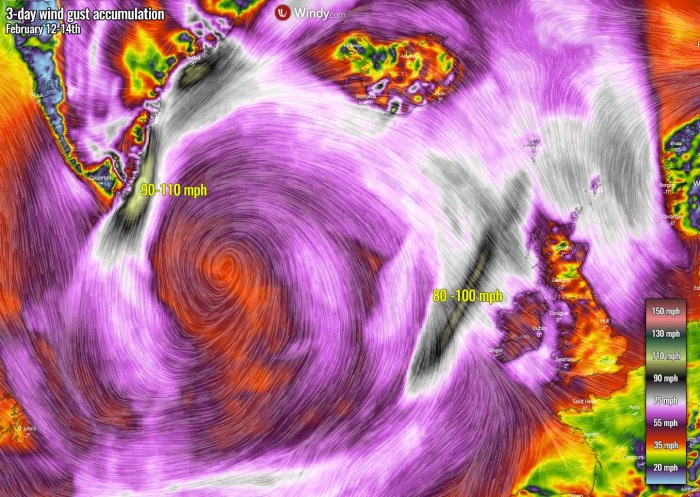 Another area of interest for severe winds is located to the west of Ireland and Scotland. That is actually a small secondary low forming within the broad circulation of Friday’s large storm. It squeezes the pressure again in western Europe, introducing high winds and high waves. The current model guidance suggests it will remain off the land area with the most violent gusts.

EXTREME SNOW FOR GREECE AND ICELAND, SATURDAY’S SNOWFALL FOR IRELAND

Such prevailing southeasterly winds on the large system’s eastern side will push a lot of moisture towards Iceland. Therefore resulting in excessive rainfall along with the south-southeast parts, but especially extreme snowfall into the mountains (glaciers). 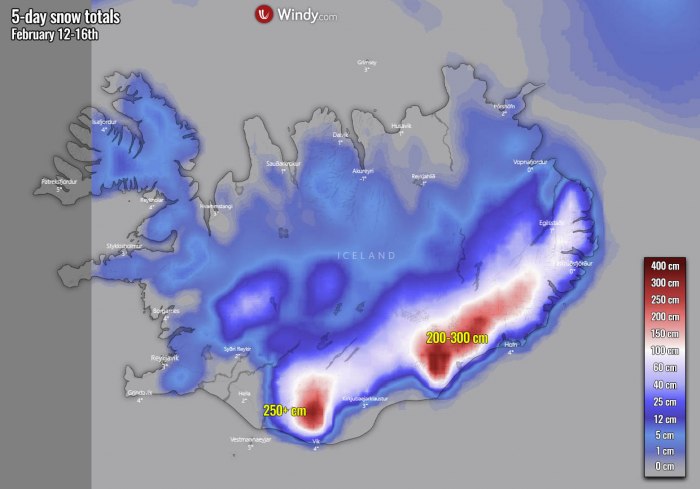 As we can see from the chart above, there are huge amounts of snow likely to accumulate across the south and southeast parts of Iceland. Quite typical for the events like this, as these very large North Atlantic storms are normally lasting for a few days. So the moisture keeps advecting into the higher terrain and leads to extreme orographic snowfall.

But over continental Europe, another focus of interest for extreme snow will be Greece. A frontal system ongoing over the Mediterranean will spread heavy snow over the southern Balkans, including Greece and Turkey. Locally, 30-50 cm of fresh snow could accumulate by Monday, even more, where precipitation will be maximized around the higher terrain. 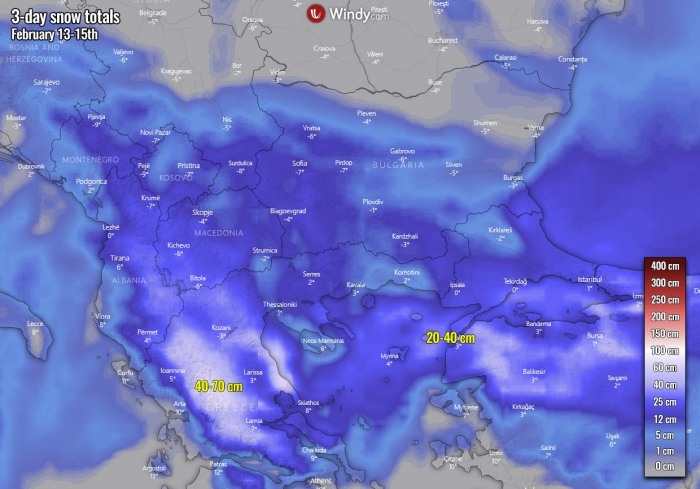 The main front associated with the large Atlantic storm will also introduce snowfall while moving across Ireland and Northern Ireland through Friday night into Saturday morning. Despite the warmer air coming up from the south, it will likely be some heavy snowfall until snow turns to rain. 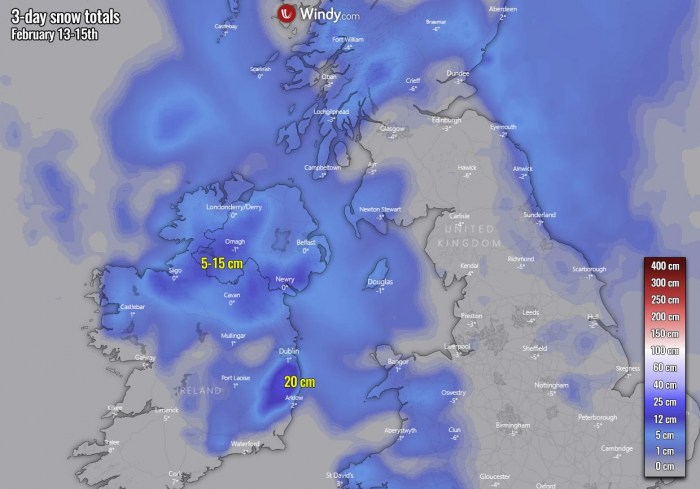 Some snow could also develop across Wales, southwest England, and Scotland. Up to around 10 cm could accumulate until the afternoon, potentially even more over the higher terrain. Unfortunately, once the rain starts, it will also become much warmer, so snow will probably melt quite fast by Sunday in many areas.

***The images used in this article were provided by Windy and WXCHARTS.