After the long series of strong earthquakes, magma movement is now also being detected. This increases the risk of a potential volcanic eruption on the peninsula, as long as the earthquake swarm continues.

We now have an updated article, with the latest data and eruption projections: Iceland earthquake swarm update – March 8th

We will also include this link to the update at the bottom of the article, so you can read this article first, to find out how this activity began.

THE LAND OF FIRE AND ICE

Iceland is a very famous volcanic island in the North Atlantic. It is one of the most active volcanic regions in the world. As history shows, its eruptions can sometimes have powerful impacts on Europe and the entire Northern Hemisphere.

It has constant earthquake activity because it sits on both the Eurasian and North American tectonic plates. The plates are moving away from each other, tearing the island apart. It is the only place in the world where you can see those two tectonic plates and the Mid-Atlantic Ridge above ground.

On the image below, you can see where the spreading Mid-Atlantic ridge is passing through Iceland (orange strands). It enters in the southwest on the Reykjanes Peninsula, going towards the east, where it then turns north. Main volcanoes are marked in red. 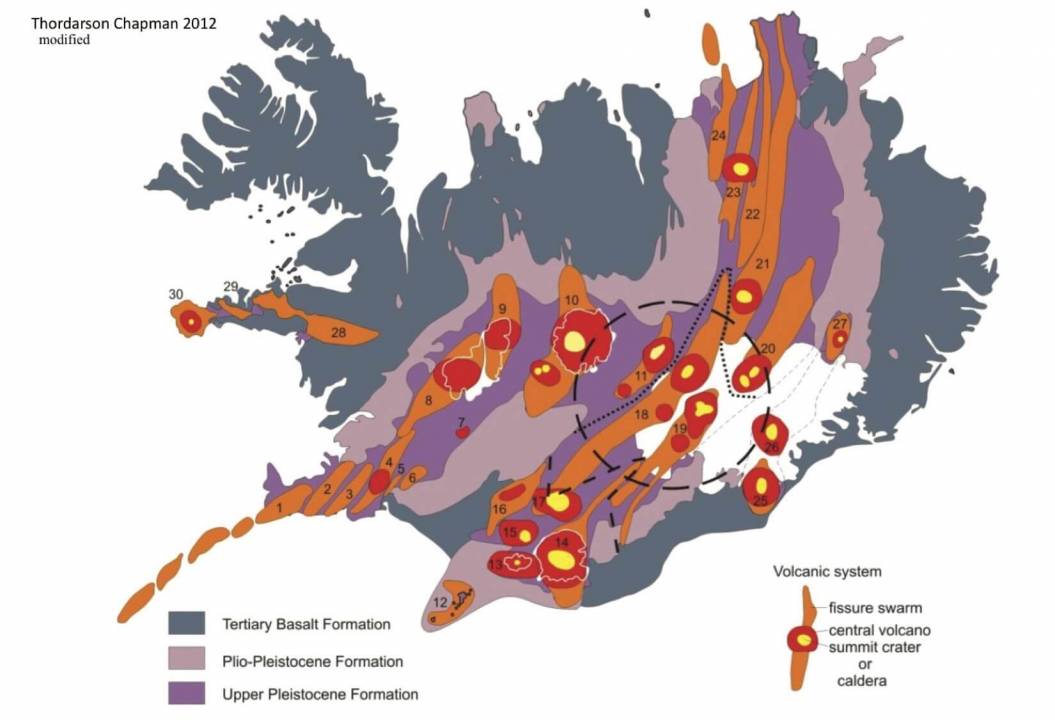 The region of main activity recently is the Reykjanes Peninsula. You can see it on the image above, as the western tip of Iceland, where the Mid-Atlantic ridge enters Iceland.

We produced a video, which shows the strongest earthquakes under Reykjanes Peninsula. You can see how they follow a specific line under the peninsula, revealing the location of the spreading mid-Atlantic ridge.

The Reykjanes Peninsula is divided into several volcanic regions, as seen in the image below. They have a southwest-northeast orientation, powered by the strong tectonic forces that spread the ground apart. 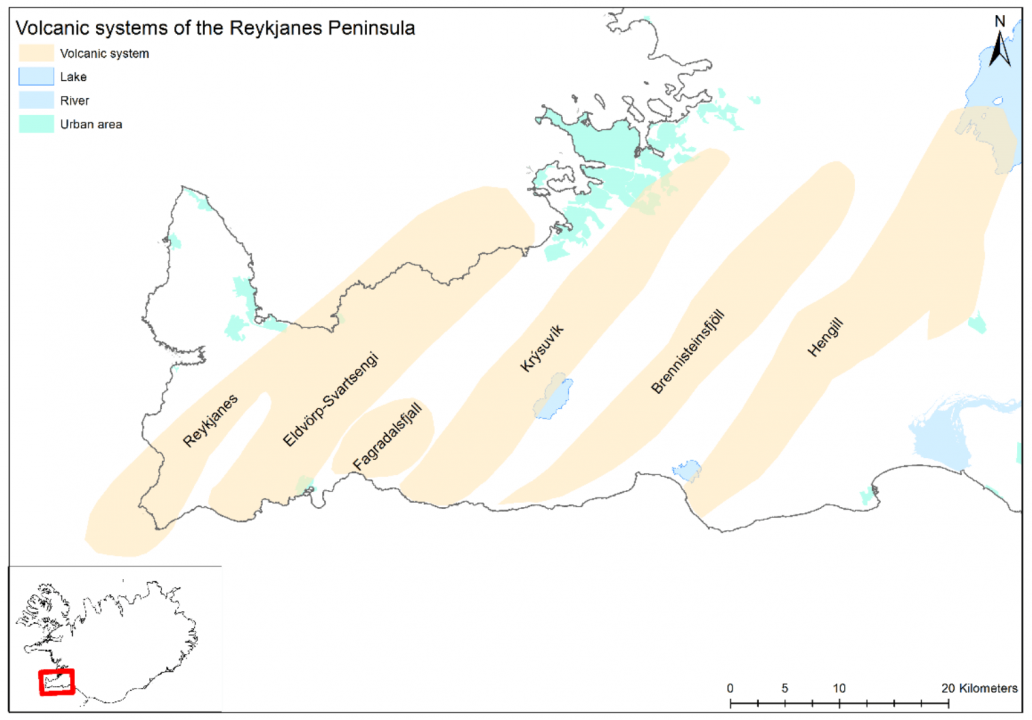 Below we have an image, which shows the last know volcanic eruption on the peninsula. We can see that an eruption here happens roughly around every 600-700 years. The last eruption sequence on the Reykjanes Peninsula was around 760 years ago. 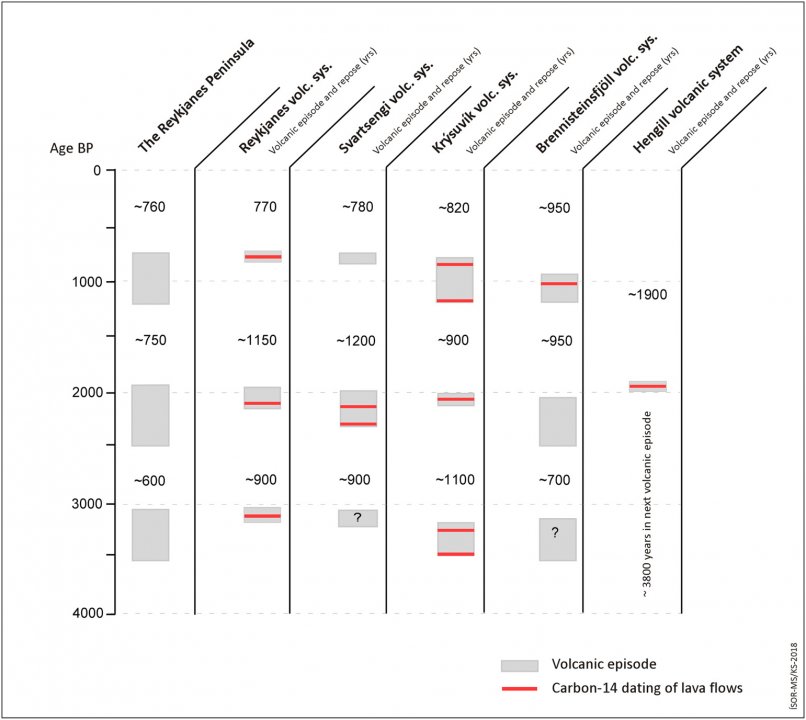 There is always earthquake activity in Iceland, especially on the Reykjanes peninsula. This is a very active region where the Mid-Atlantic ridge tears the ground apart. Below you can see earthquakes in mid-February. Very numerous, but small in magnitudes.

Below we have an image from Dr. Stephen Hicks, which shows several small earthquake swarms before the main one. More than 500 small earthquakes were detected around a week prior to the onset of the main swarm on February 24th. 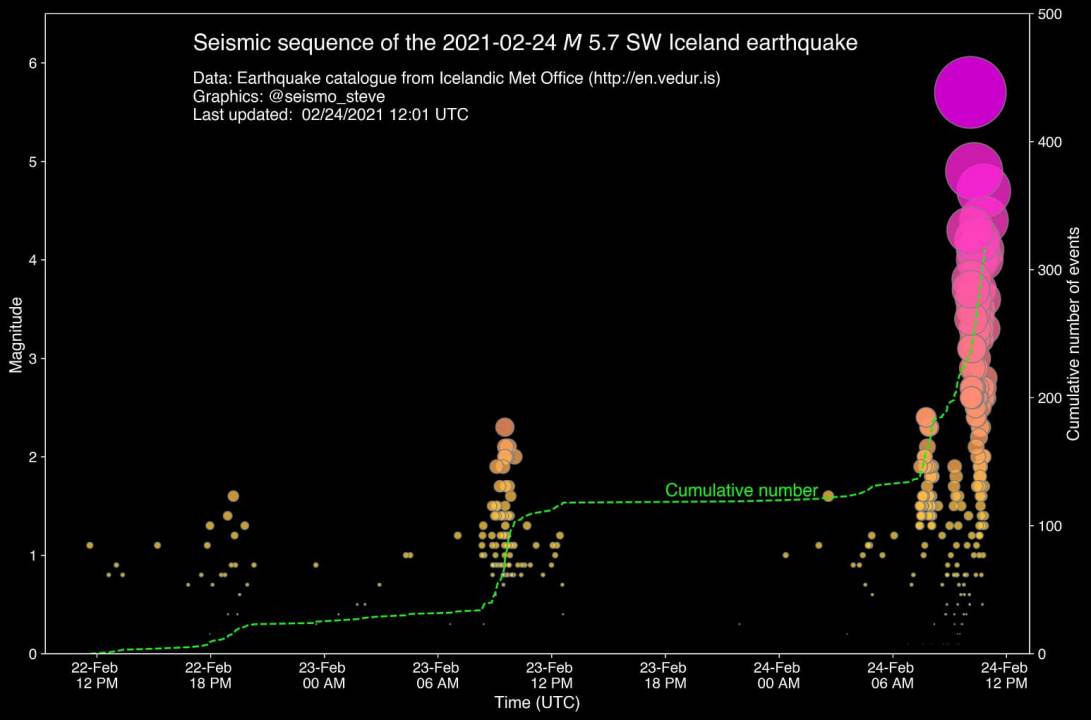 Looking at all the earthquakes in the last week of February: we can see the earthquake activity is much more widespread and with much stronger magnitudes than compared to the earlier image for the week earlier.

The earthquake swarm is currently ongoing. The graph below shows the earthquake activity on the peninsula in the past 2 weeks. Since the onset of the main swarm on February 24th, the earthquakes continue, with frequent magnitude 4 and 5 earthquakes. 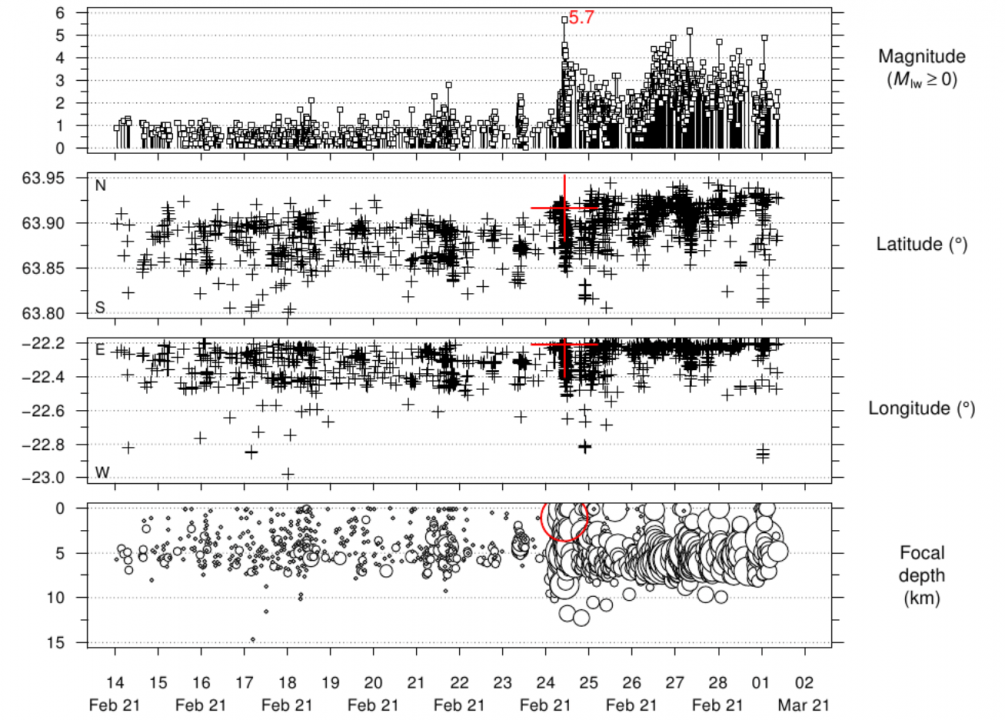 More than 10.000 earthquakes have been recorded with the Icelandic Meteorological Office’s automatic seismic measuring system since the swarm began last week. About 30 earthquakes over M4 have been detected and about 200 earthquakes larger than M3. 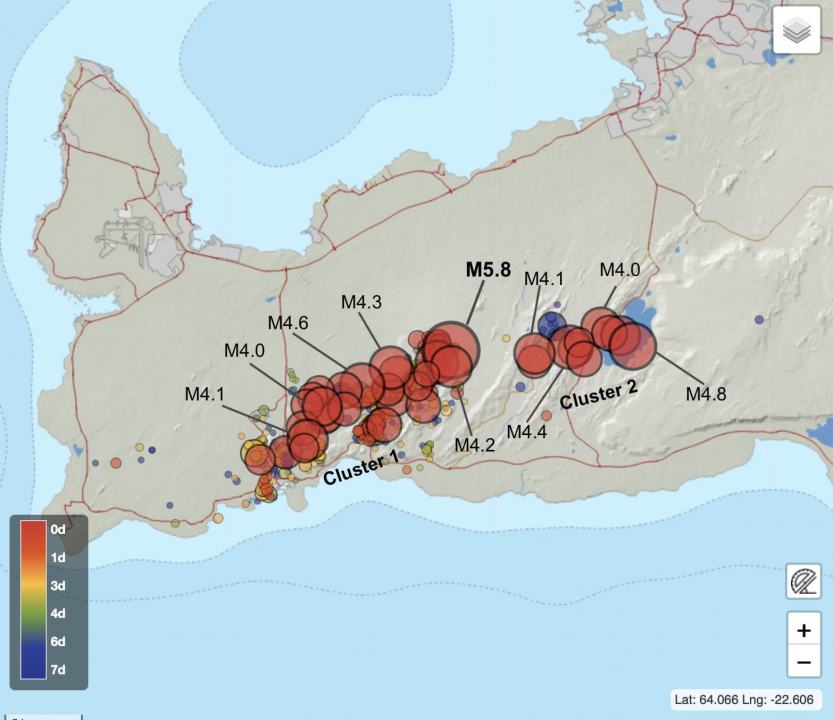 The time sequence of the first 5 days of the swarm shows the earthquakes slowly shifting more into cluster 1, while cluster 2 calmed down a bit. 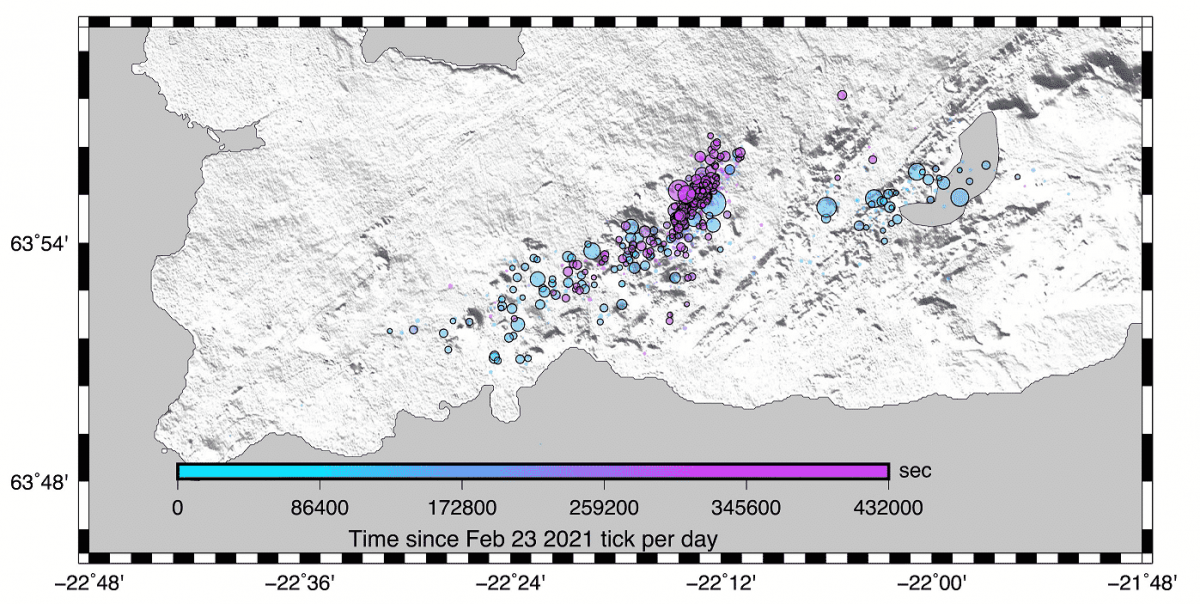 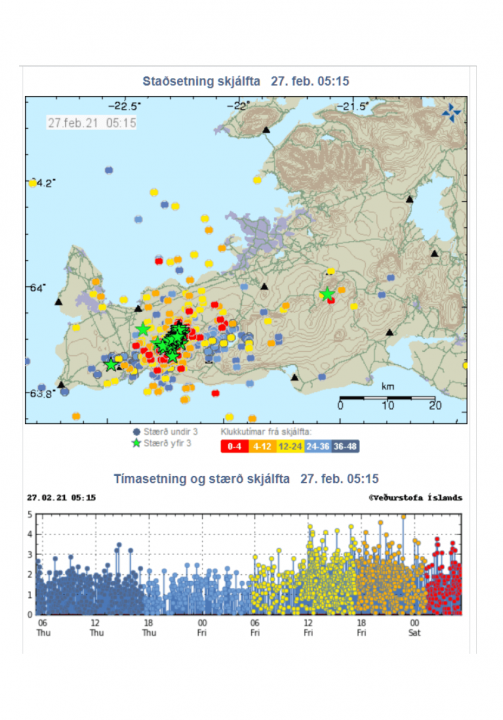 Currently, the earthquake is still going strong. Below we have the earthquake locations and magnitudes for Feb 28th and March 1st. Another magnitude 5 earthquake was detected in this period. An important thing to notice here is the renewed activity in the eastern cluster, in the Krysuvik volcanic system. So now the swarm is again going strong in both clusters. 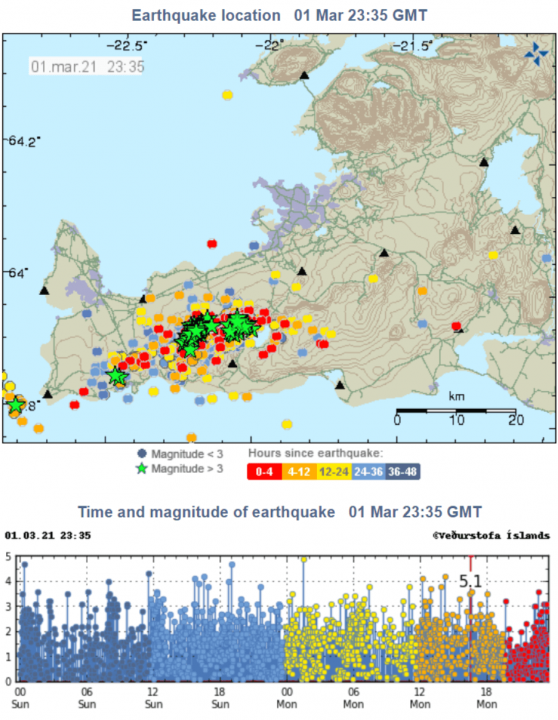 The seismograph below reveals that constant earthquake activity is being detected. Each disturbance in the graph below equals 1 earthquake. Of course, we need to consider that this graph usually adjusts the display when larger earthquakes occur, to show its signal fully. This resizes the plot to the point where smaller earthquakes are not visible anymore for a while. 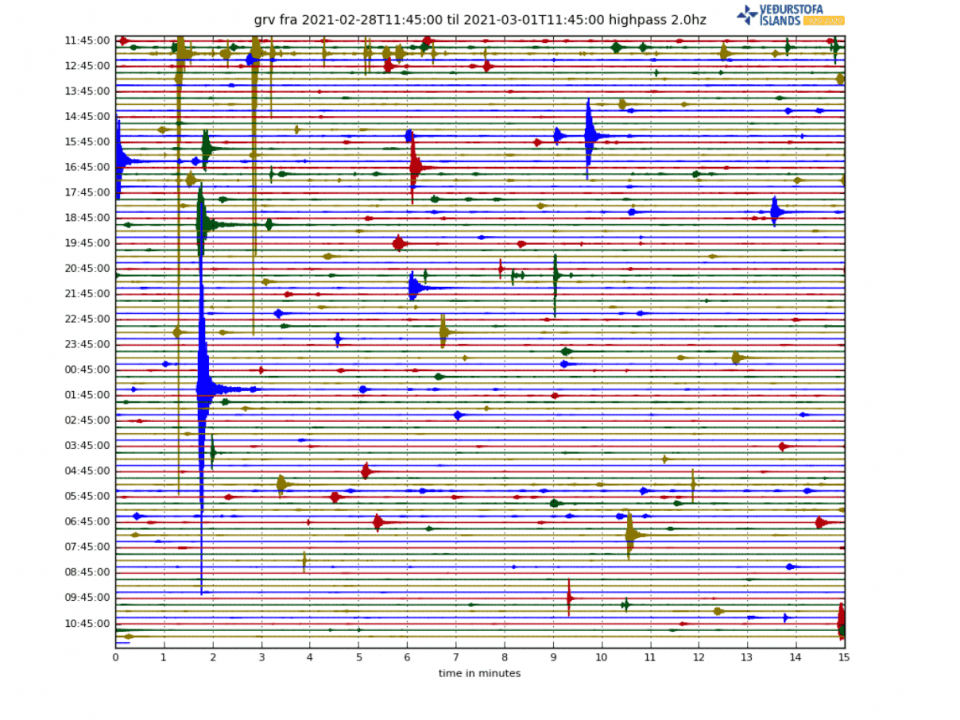 But what is powering this earthquake swarm? As we mentioned earlier, in this region the tectonic plates move away from each other. This causes ground motion and stress. earthquakes are just releasing this pent-up stress, as the moving plates push the stress beyond a critical point. 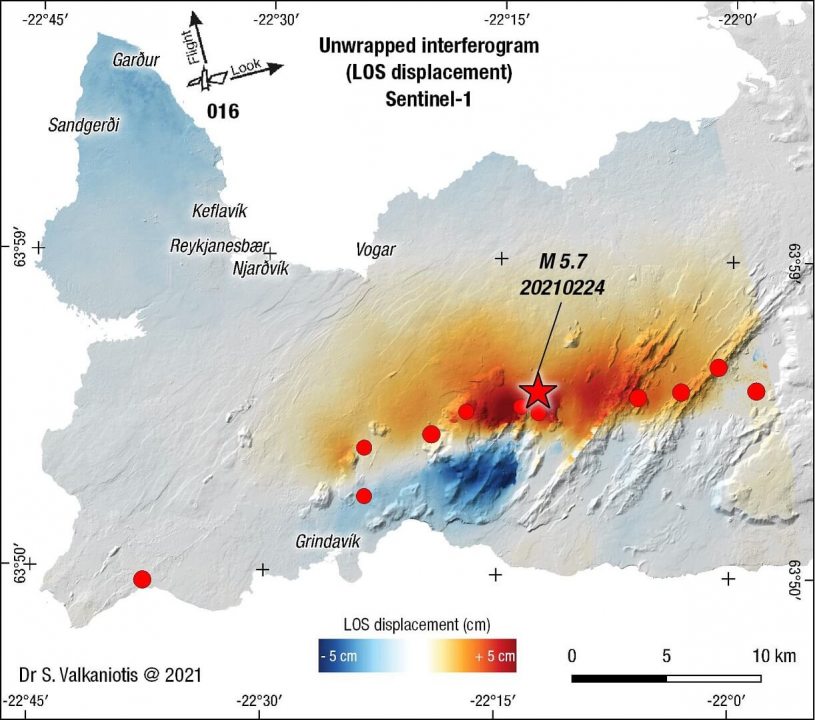 Despite being tectonic in nature, earthquake swarms in Iceland do sometimes have a tendency to include magma. What starts as a simple tectonic swarm can turn into a volcanic eruption sometime later.

In strong swarms, the ground breaks and faults, creating fractures through which magma can rise to the surface. In most cases, the magma does not reach the surface as there is no available path and the earthquake swarm dies off before the magma gets that far. 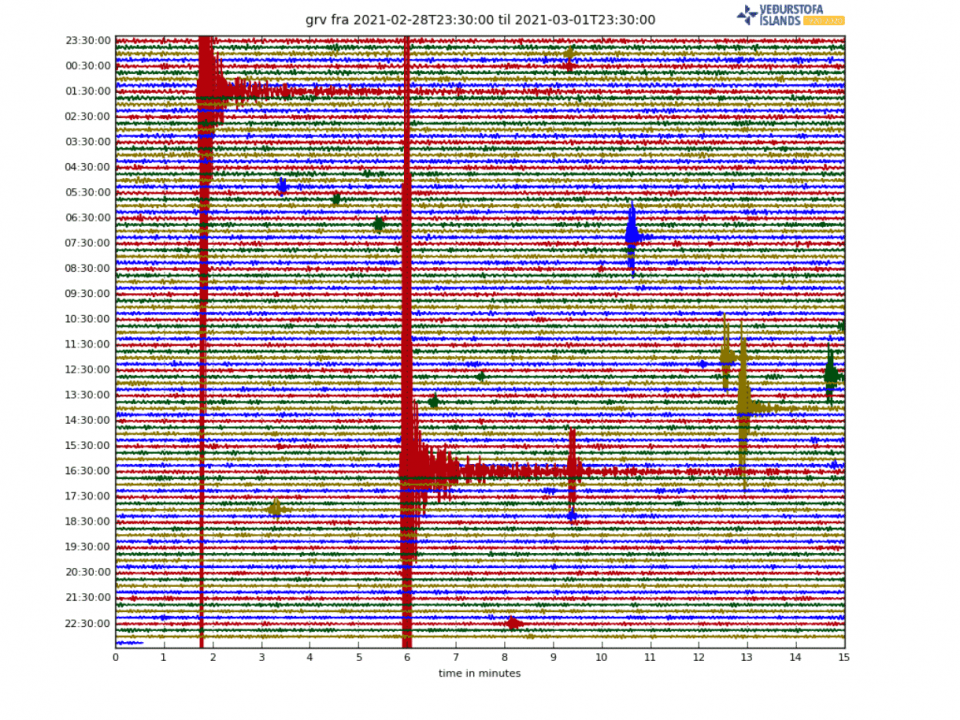 Strong signals are emerging now, that magma is getting involved with the earthquake swarm, as it is ongoing. The volcanic alert level was appropriately raised to yellow for the region, by the officials. Notice the yellow mark for the Krysuvik volcanic system. 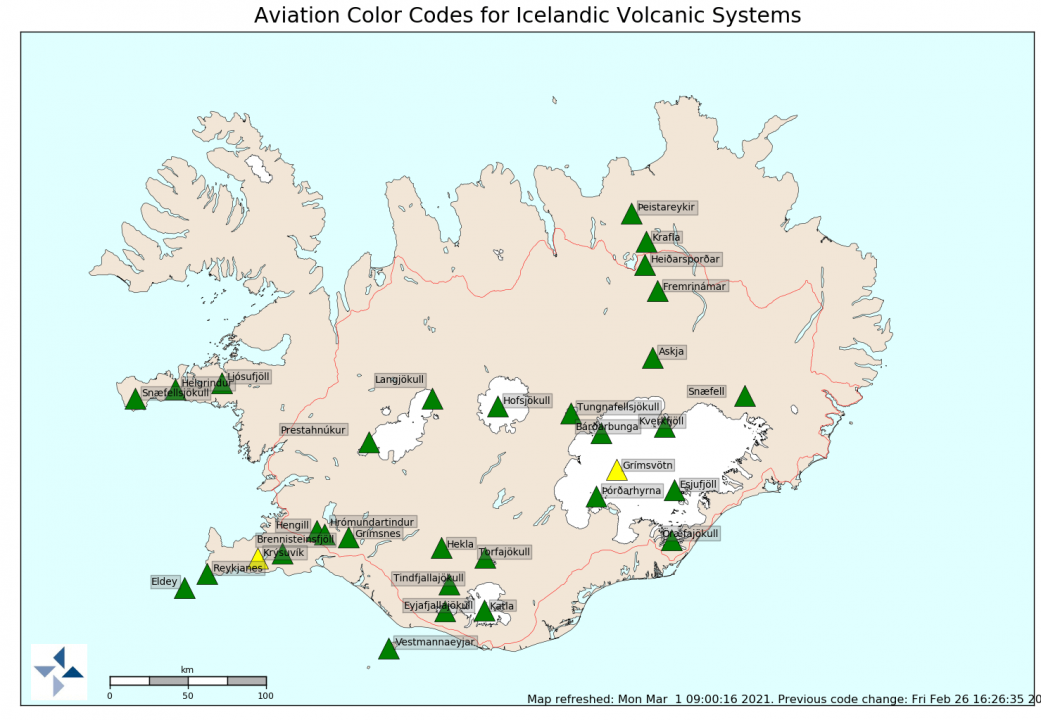 The official statement also confirmed that more evidence is being seen for magma rising beneath the surface in the earthquake swarm. one of the tools to see that, is the ground motion detection by satellites.

Below we have an image that shows vertical ground deformation. Basically, it shows where the ground has moved up (warm colors) or down (cold colors). We can see a large area or rising ground, likely associated with accumulating magma in that area. 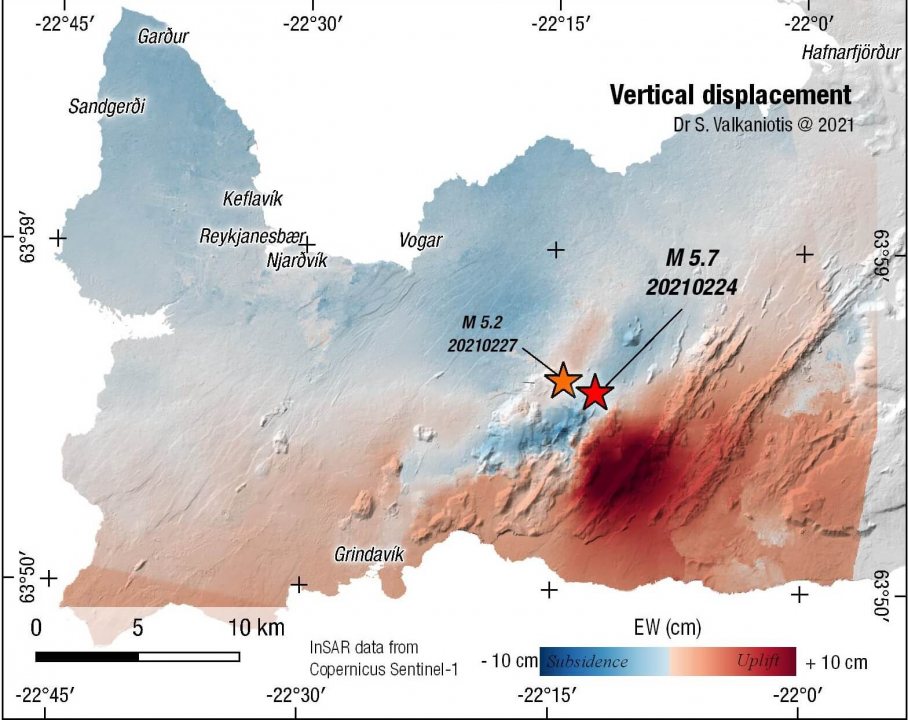 Based on all the earthquake data, a map was produced by the University of Iceland, which shows the highest risk of a volcanic eruption. You can see that the highest chance of an eruption is in the Fagradalsfjall volcanic system. That is the cluster 1 we saw before. Note that the eastern region is still also very active with earthquakes, so any of the two regions is a potential volcanic threat. 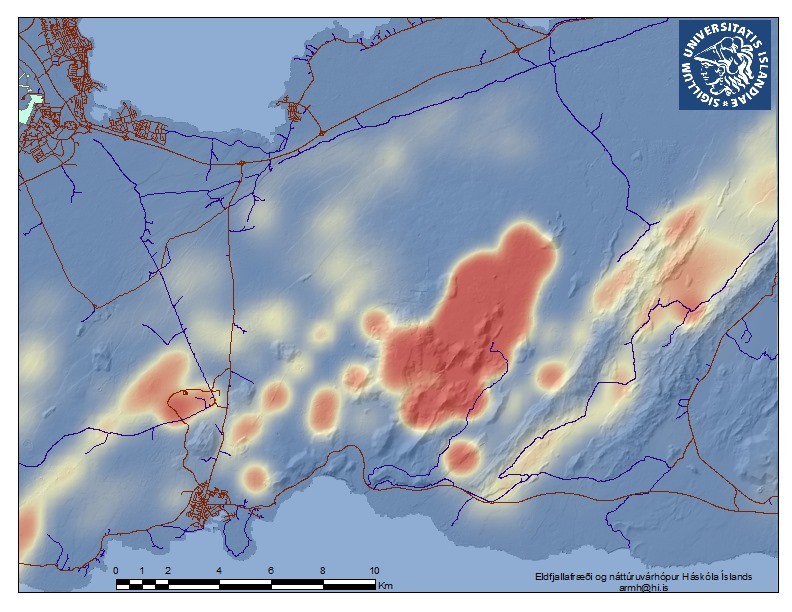 Our final graphic shows the projected path that lava would take in a potential eruption from the cluster 1 area. This is just a simulation, based on the current known information and historical data. Most of the lava flows would go towards the north and northwest. Depending on the erupted volume, the lava could reach the main road and endanger local towns and villages. 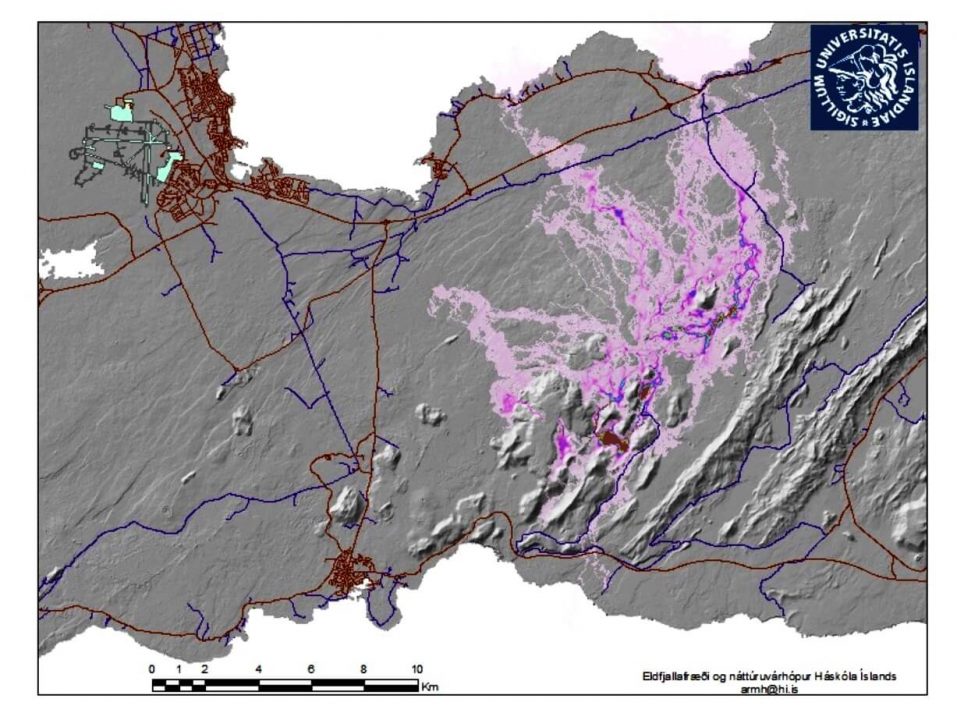 An eruption is not certain at this point, as more data need to be gathered. The officials will raise the eruption risk and alert levels appropriately as they have access to a large array of data.