On the east coast of the United States and Canada as well as Northern Asia, sufficient temperature conditions remain to forecast extreme snowfalls while their magnitude might also increase. By contrast, the recent increase in temperatures drastically reduces mean snowfalls in Western Europe. The already observed and predicted intensification of the hydrological cycle does not result in an increased frequency of extreme snowfalls for the Europeans.

Extreme snowfalls remain a major damaging category of extreme weather events, particularly in the northern hemisphere. The predicted strengthening of the hydrological cycle allows for potentially more snowfall, as long as the temperature remains sufficiently cold for snow to occur.

These contrasting forces lead to a difference between the forecast of a significant decrease of mean snowfall, and a much less noticeable decrease, or even increase, of extreme snowfalls. In order to properly understand how such apparently conflicting mechanism works, it is first useful to review how solid precipitation forms and occurs. The three ingredients for snow to form are below-freezing temperatures, condensation nuclei, and water vapor in the air. 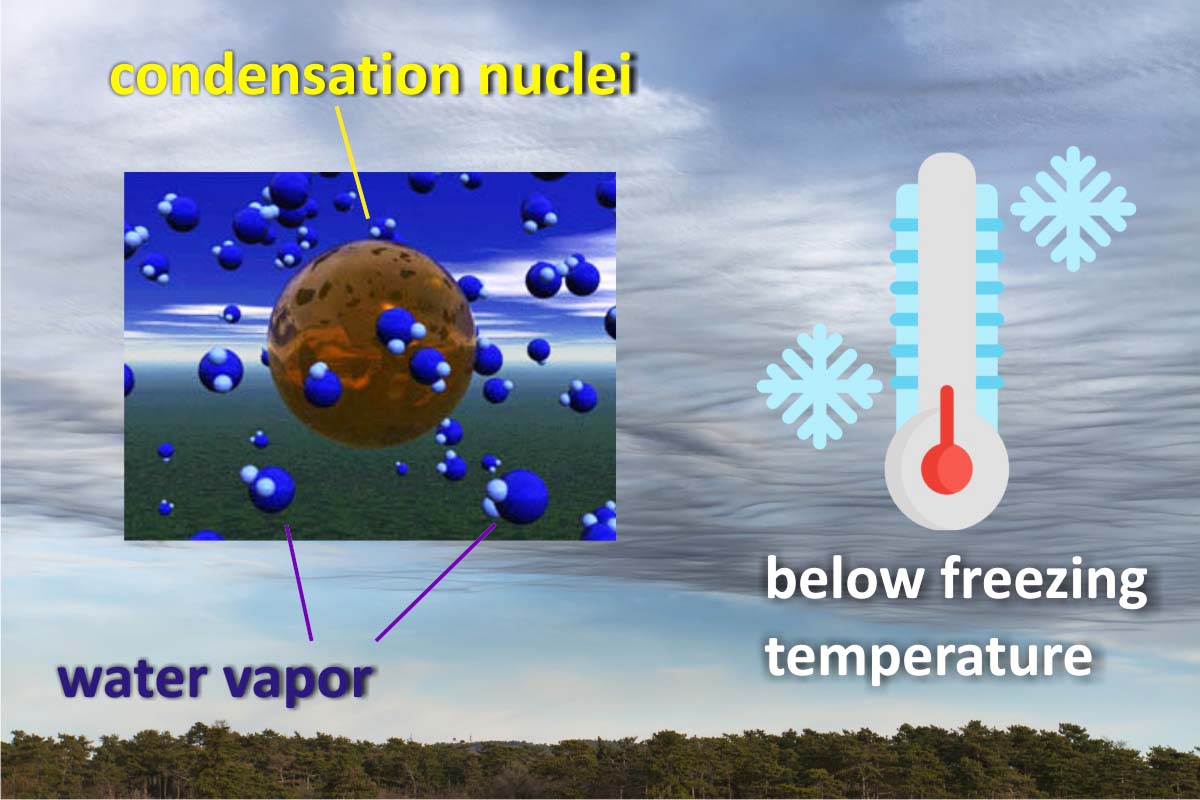 HOW SNOW AND SOLID PRECIPITATION FORM

Clouds form when water vapor, which is an invisible gas, condenses and turns into liquid water droplets or ice crystals. To do so, water vapor needs to stick to the so-called condensation nuclei. When water vapor in the atmosphere condenses directly into ice, bypassing the liquid phase, the resulting forms are properly called snow crystals.

The word “snowflake” is a more general meteorological term, used to describe several different types of winter precipitation. Snowflakes are anything from individual snow crystals to agglomerations of many crystals that collide and stick together, falling to earth as flimsy puffballs. Snowflakes that descend through moist air that is slightly warmer than 0 °C or 32°F will melt around the edges and stick together to produce big flakes. In the video below you can visualize the eight main steps from the first tiny ice crystal to the composite snowflake.

Although the general theory is well known, the formation of atmospheric snow crystals still remains a largely unsolved problem. The morphology diagram below qualitatively describes the growth of snow crystals as a function of temperature and water vapor supersaturation. Snowflake shape strictly depends on temperature formation. 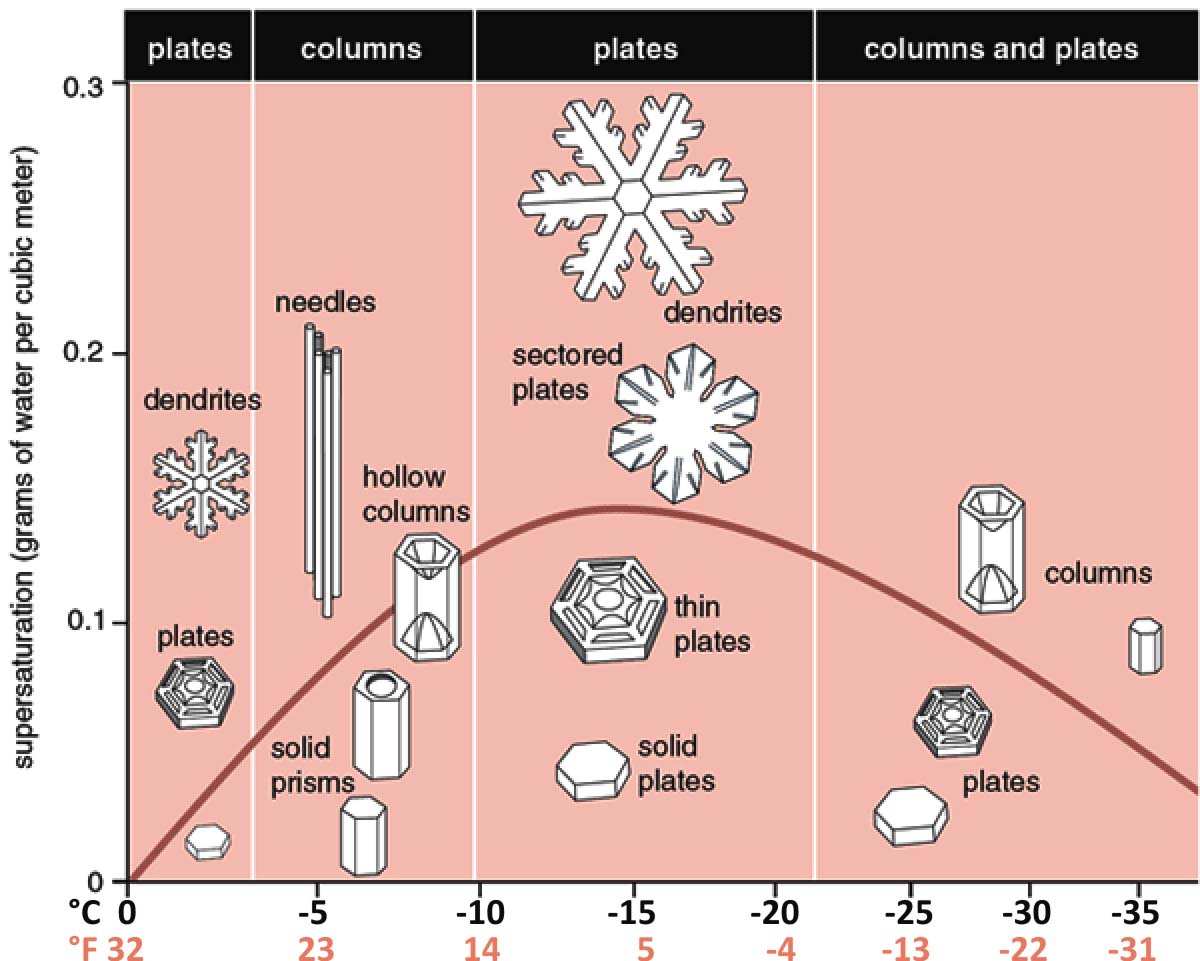 Hygroscopic nuclei have sizes from 0.01 to 10 micrometers. One micrometer, also commonly known as micron, is equal to one-millionth of a millimeter or 39 millionths of an inch. In the classification by size, the smallest are called Aitken nuclei having diameters less than 0.4 micrometers with concentrations of 1000-5000 every cubic centimeter. One cubic centimeter is roughly equal to 0.06 cubic inches. They are so small that a high degree of supersaturation is required for the vapor to condense on them. 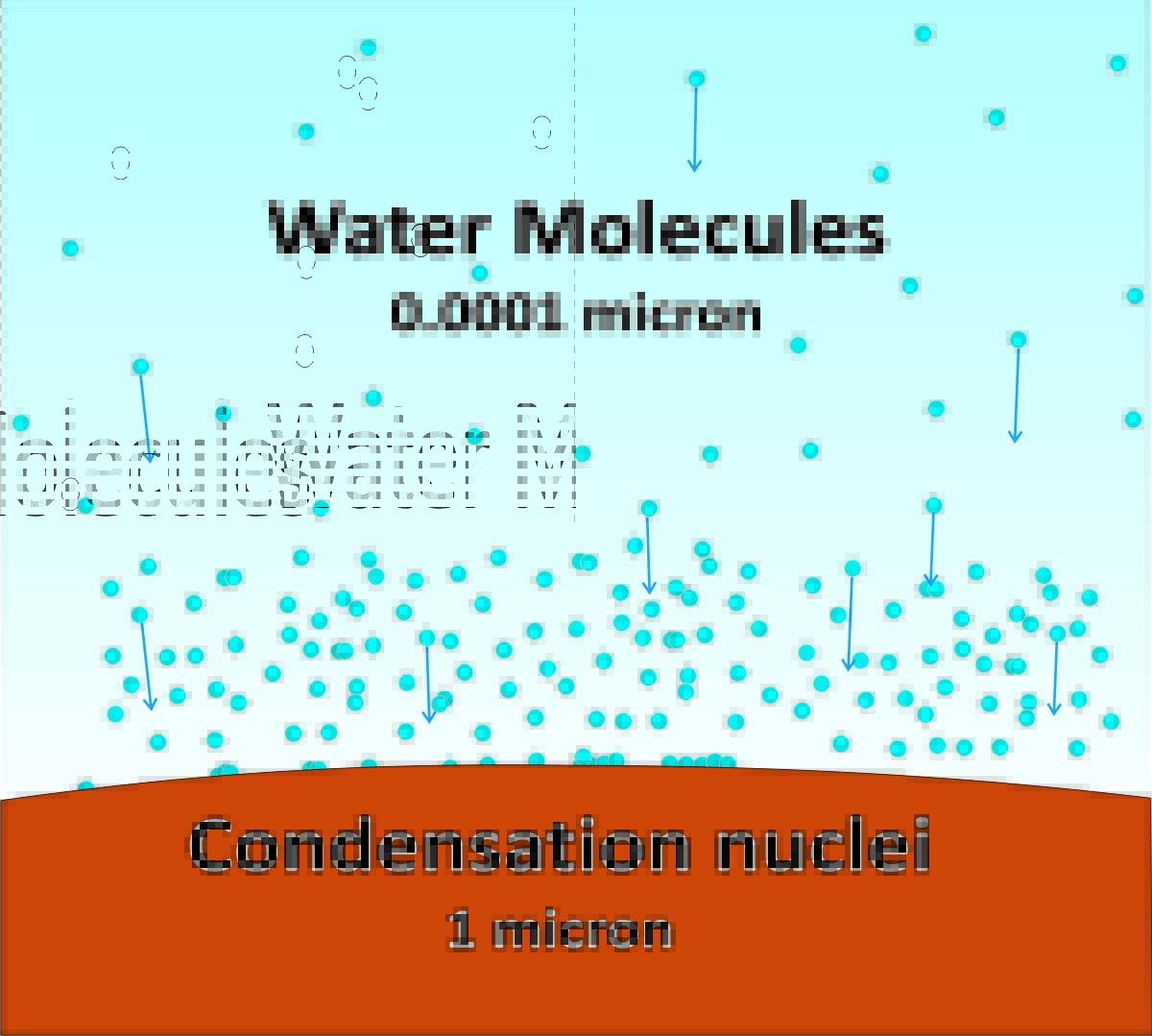 The main group of hygroscopic nuclei is salt whose main source is obviously the sea when the waves break. Their concentration increases with increasing wind speed on which the wave motion depends. Equally numerous droplets of saltwater are expelled into the atmosphere by intense evaporation when the lava of some effusive volcanoes like in Hawaii reaches the sea surface.

Another group of nuclei is all those particles composed of sulfates present in the atmosphere as products of the combustion of other substances. The particles that the winds remove from the ground constitute a third important source of nuclei. Those with diameters greater than 10-20 micrometers fall quickly to the ground due to their weight, while the smaller ones can be transported to great heights and large distances. 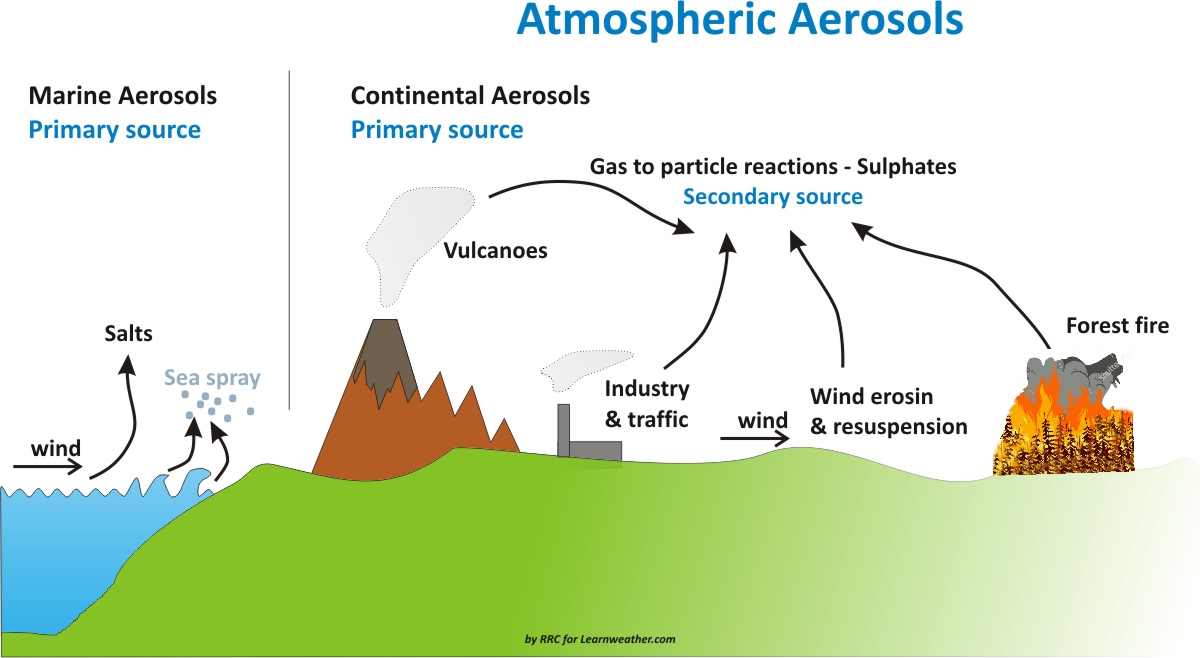 Now, not all winter solid precipitation during extreme events falls to the ground as snow. A winter storm is a weather event where the precipitation is mainly snow, sleet, or freezing rain. Often coupled with strong winds and below-freezing temperatures, winter storms can be dangerous.

In the winter, most precipitation forms as snow within the clouds because temperatures at the top of the storm are cold enough to make snowflakes as we saw above. Winter storms begin with moist air rising up into the atmosphere, just like other types of storms. Rising air is common at a cold front, where warm air is lifted above cold air and is necessary for cloud formation and precipitation.

Extreme weather events are becoming more and more frequent and intense lately. The United States National Climate Assessment finds that the number of heatwaves, heavy downpours, and major hurricanes has increased in the United States. The strength of these events has increased too. Other countries and geographical regions in the world experience the same.

Singular strong weather events normally have a dynamical origin and many of them result from persistent weather patterns, typically associated with blocking and high amplitude waves in the upper-level flow. Evidence links Arctic Amplification with an increased tendency for a slower eastward movement of Rossby Waves that in turn favor weather extremes triggered by persistent weather conditions due to amplified flow trajectories. In the following article we were explaining how arctic amplification is modifying the evolution of Rossby waves. 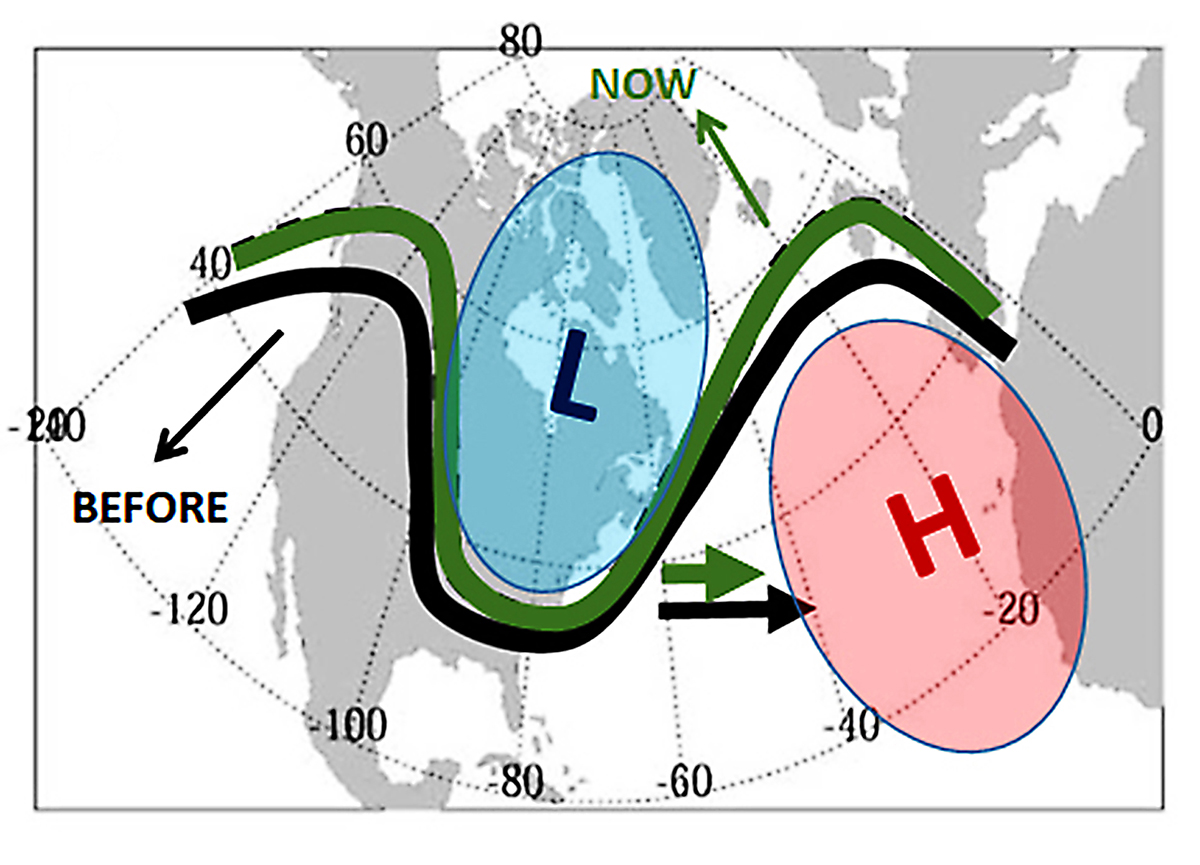 Several authors recently stated that the intensity of heavy precipitation events seems to increase more than mean precipitation under a warmer climate in most of the world.

This is consistent with a larger moisture-holding capacity and the Clausius–Clapeyron law. Simply speaking, Warmer air can hold more water vapor. For each degree Celsius of warming of the atmosphere the air’s capacity for water vapor goes up by about 7 percent.

Therefore, temperature is the primary factor determining water vapor saturation. If the temperature will keep growing though, and a warmer atmosphere contains more moisture, rainfall extremes are also expected to become more frequent and intense.

There are already observations confirming this. Heavy rainfall events over most land areas have become more frequent and intense in recent decades, although these trends have varied notably between regions and seasons. For instance, in the United States, the Midwest and Northeast have seen the strongest increases in heavy precipitation events. Accordingly, extreme precipitation has produced more rain and became more common since the 1950s in many regions of the world. 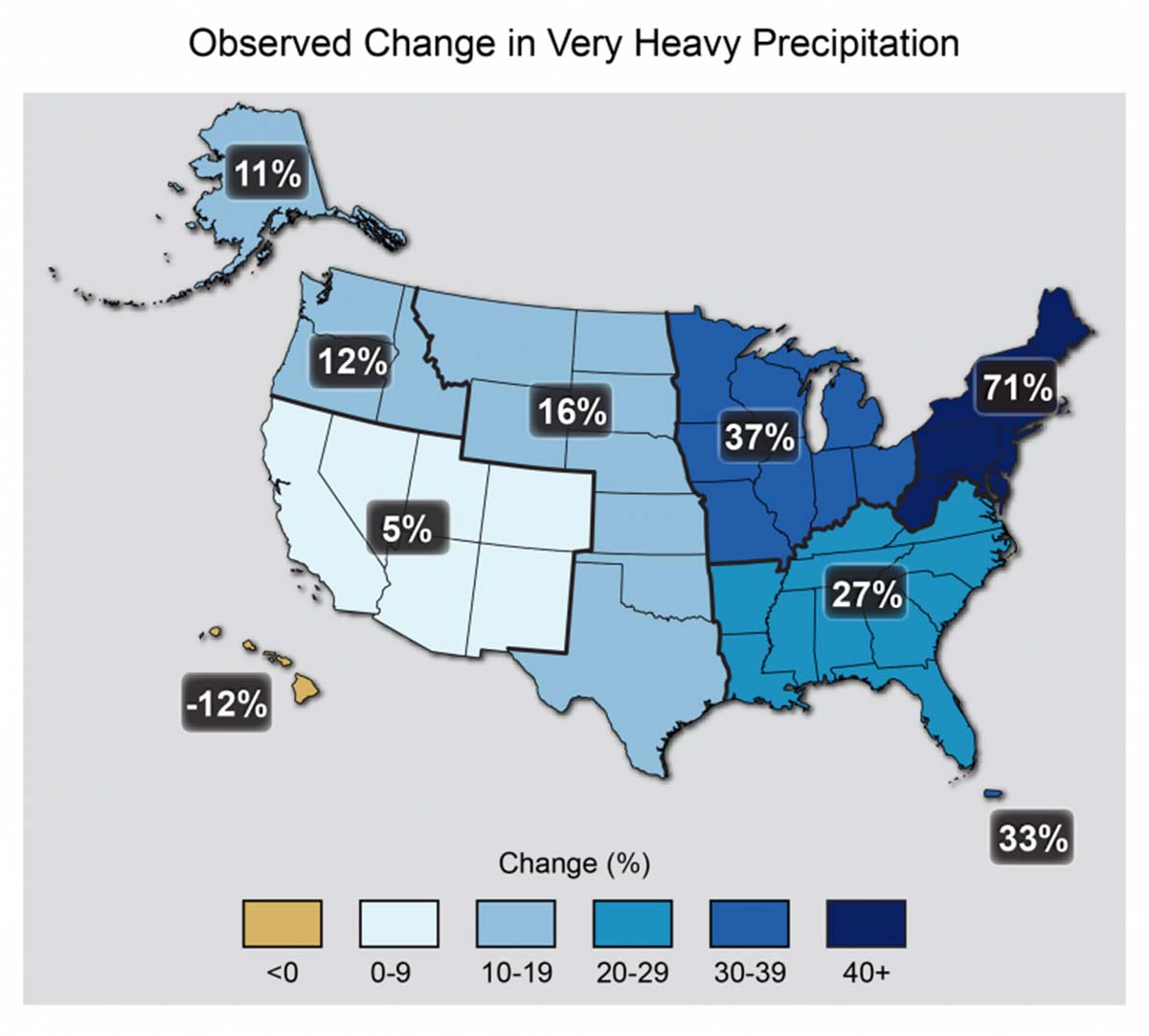 According to the European Environment Agency, , heavy precipitation events have generally become more intense and more frequent in Europe as well. This is particularly evident in northern and north-eastern Europe since the 1950s, even though not all changes are statistically significant. Different studies and indices show diverging trends for southwestern and southern Europe.

The increase in northern and north-eastern Europe is a consequence of the observed shift towards the pole of the North Atlantic storm track and the weakening of Mediterranean storms. Findings in a recent study have suggested that future increases in intense precipitation events will be more pronounced at the sub-daily time scale over Spain and the western European seaboard.

WHAT ABOUT EXTREME SNOWFALLS

In the past few decades, the northeast United States experienced several calamitous extreme winter snowfalls with the majority closely associated with extratropical cyclones. Conditions that influence the severity of snowfalls in the eastern United States include warmer-than-average ocean surface temperatures in the Atlantic. These can lead to exceptionally high amounts of moisture flowing into a storm and contribute to the greater intensification of the snowfall.

The 2010 extreme snowfall named ‘Snowmaggedon’ that hit particularly Washington D.C. with 45 cm (17.8 inches) of snow on February 5 and 6, was associated with unusually high ocean surface temperatures in the Atlantic. This was the fourth-highest total snowfall amount recorded at the Reagan National Airport. On 8 and 9 February 2013, an extratropical cyclone brought extremely heavy snow of 30 to 60 cm (12-24 inches) across New York City and Long Island, and over 90 cm (35 inches) in central Connecticut. 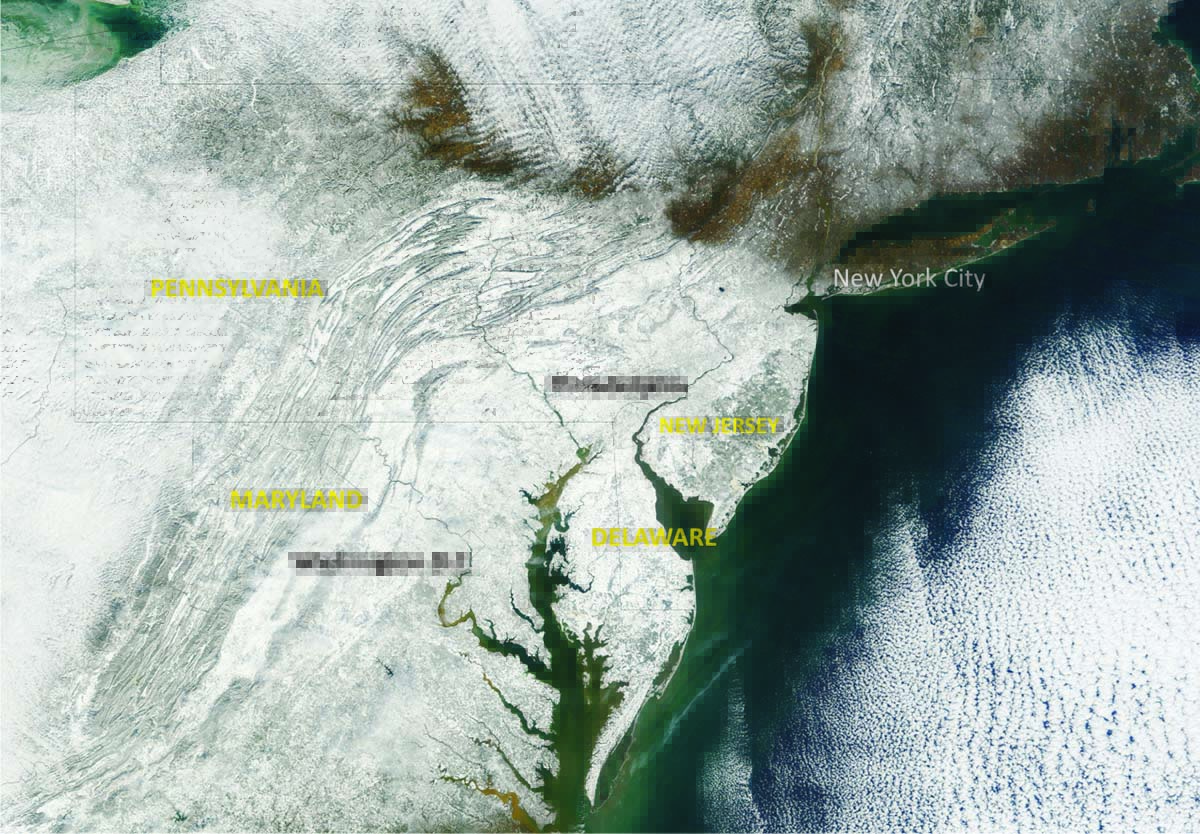 Figure: A high-resolution visible satellite image on Feb. 7, 2010, after the first “Snowmageddon” snowstorm from earthobservatory.nasa.gov

From 30 December 2018 to 15 January 2019, a sequence of extreme snowfall events affected the entire Austrian side of the northern Alps. In some regions, the amount of fresh snow was unusually large, e.g. 3.71 m of snow over 17 days at Seefeld, which statistically occurs only every 50 or 100 years.

In that particular circumstance, the anomalously warm seas in North Baltic increased the snowfall amounts in the Alps loading the winds from the north with moisture due to a persistent high blocking over the Atlantic. In the coastal Norwegian town of Tromso winter, 2019-20 brought 6.53 m (21.4 feet) of snow. 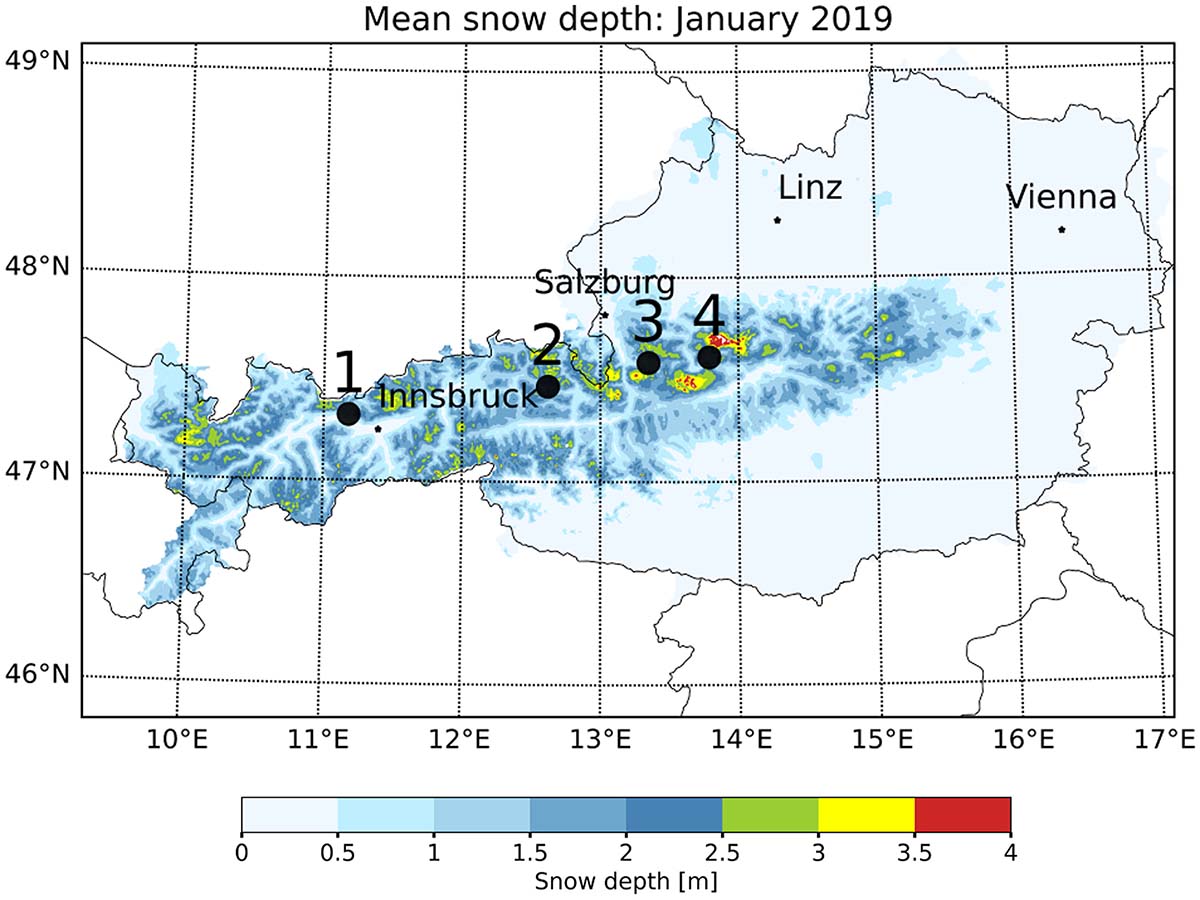 Figure: Mean snow depth for January 2019 in the Austrian Alpine region based on SNOWGRID data. Indicated are four selected stations: 1, Seefeld in Tyrol; 2, Hochfilzen in Tyrol; 3, Abtenau in Salzburg; and 4, Bad Aussee in Styria. See this work

HOW COULD CHANGE EXTREME SNOWFALLS IN THE NEXT FEW DECADES?

There is substantial evidence that global warming and the resulting changes of the hydrological cycle may lead to a decrease of mean daily snowfall in most areas of the Northern Hemisphere except for high latitudes. Nevertheless, under a strong global warming scenario, the forecast for extreme snowfalls increases for already snow-prone regions also in the mid-latitudes.

These results have been recently presented in a scientific paper titled Regions of intensification of extreme snowfall under future warming published in the scientific journal Nature-Scientific Reports by Quante and others. The authors stated how ‘Due to global warming the frequency and character of precipitation are changing as the hydrological cycle intensifies. With regards to snowfall, global warming has two opposing influences; increasing humidity enables intense snowfall, whereas higher temperatures decrease the likelihood of snowfall’. 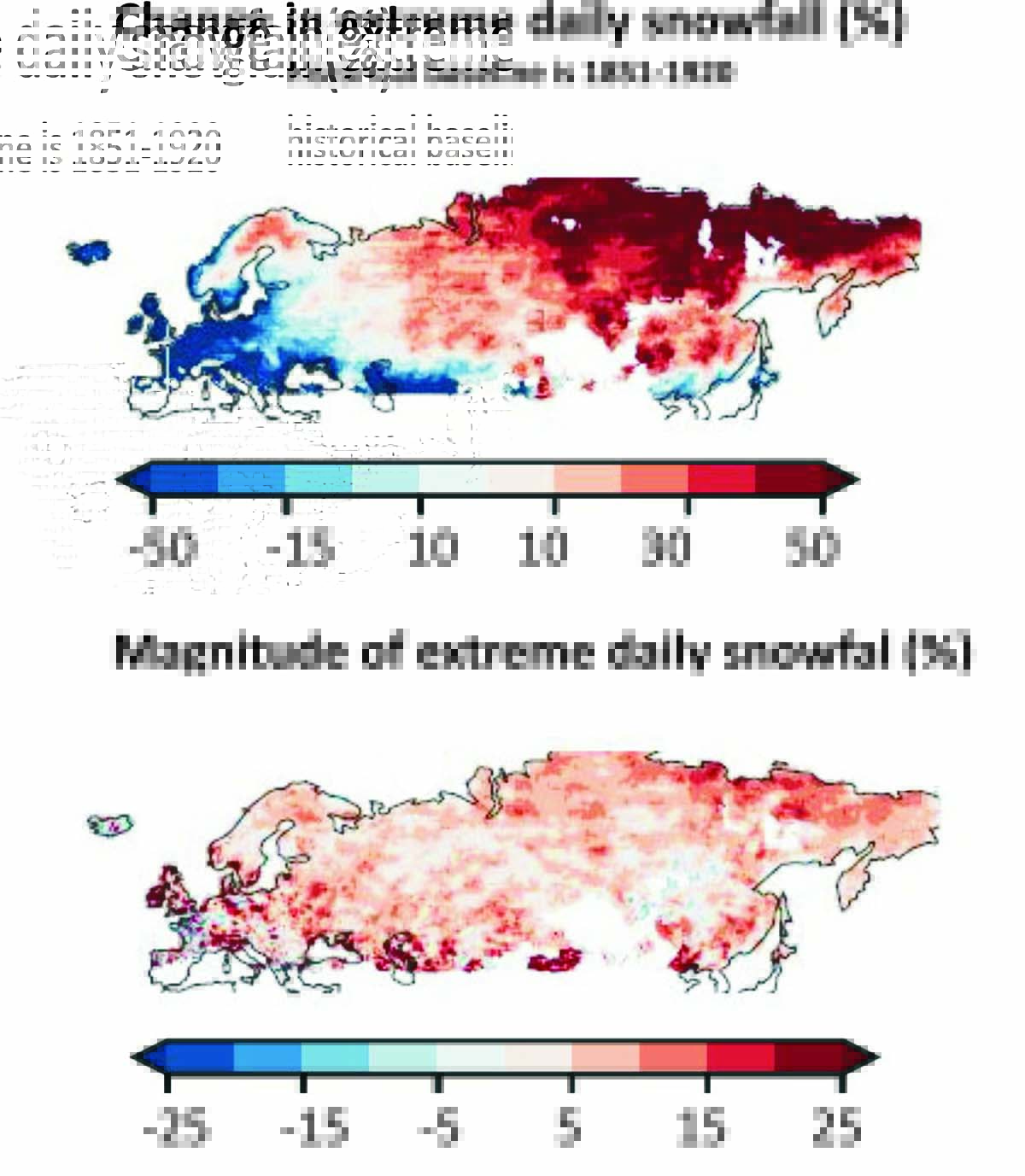 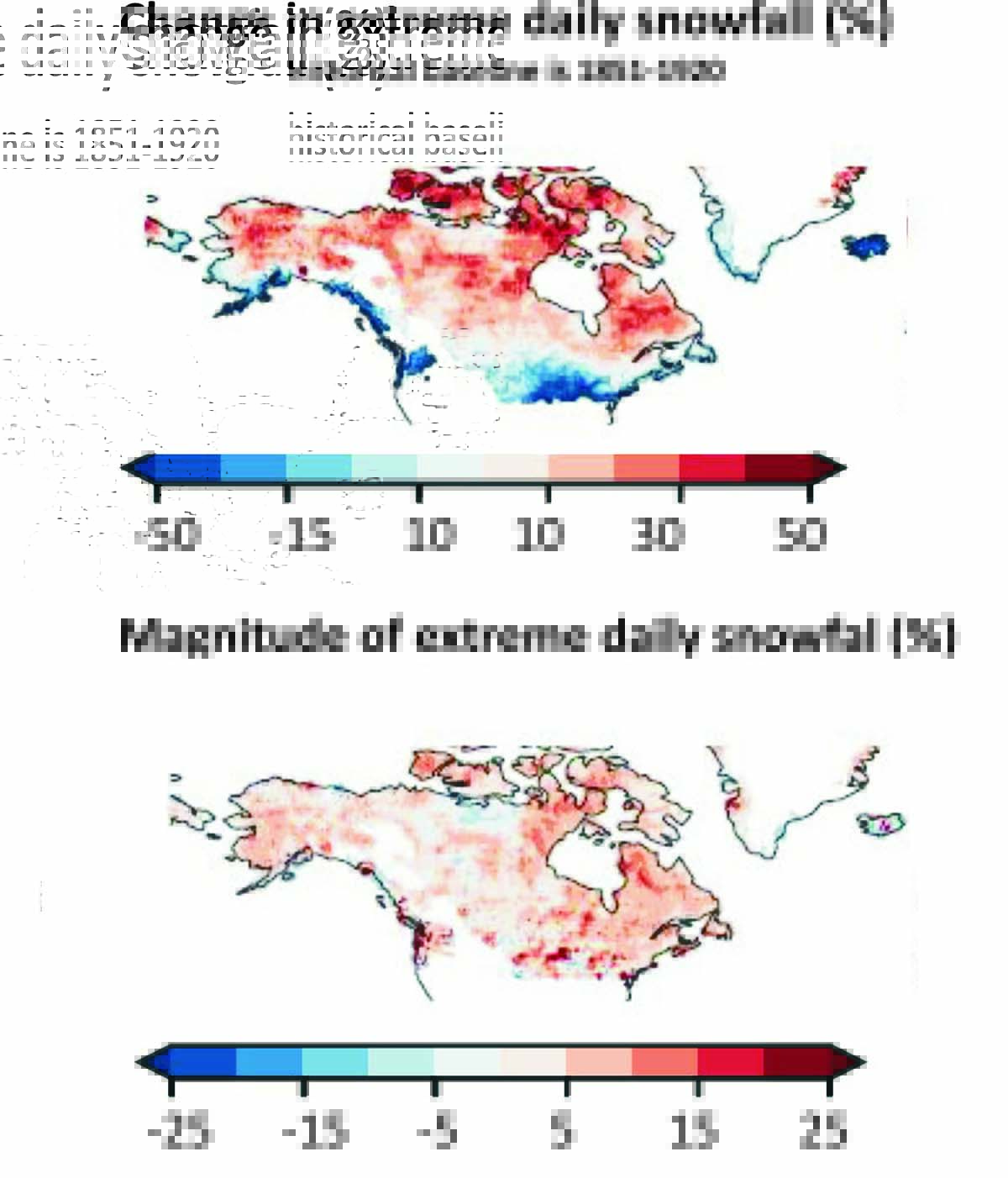 In contrast to this increase in extreme snowfall statistics, the mean daily snowfall already departs in the near future. While snow-prone regions in high latitudes exhibit an increase of mean daily snowfall by 20% points until 2050, there will be a sharp decrease for lower latitudes of about −20 % points. These trends continue until the end of the century, yielding decreases of up to 80% points in large parts of Europe and parts of North America, while high-latitude regions like Siberia show a similar increase of around at least 50% points.

The increase in temperatures will drastically reduce snowfall in Western Europe. The already observed and predicted intensification of the hydrological cycle does not result in an increased frequency of extreme snowfalls.

By contrast, for the east coast of North America as well as Northern Asia, sufficient temperature conditions remain for extreme snowfall to occur.

A Powerful Winter Storm With Significant Snow and Blizzard is Forecast for The Northern Rockies, a Severe Weather Outbreak expected for The Great Plains on Tuesday