Weather forecast for October 2021 is an interesting one for North America. The month will be marked by a strong high-pressure system and warmer than normal temperatures, while low pressure pushes in from the North Pacific, bringing colder temperatures to the western United States and even some severe weather.

October is the first month of the cold season in the Northern Hemisphere. It is not a fully cold month but marks a bigger step into Autumn. This is the time when temperatures start to slowly cool off over the mid-latitudes but cooling faster over the polar regions.

This creates pressure differences across the northern hemisphere, which provides more and more energy for complex and dynamic weather patterns. We will look at October 2021 weather development over North America and how a massive high-pressure system will influence the weather over the entire month. 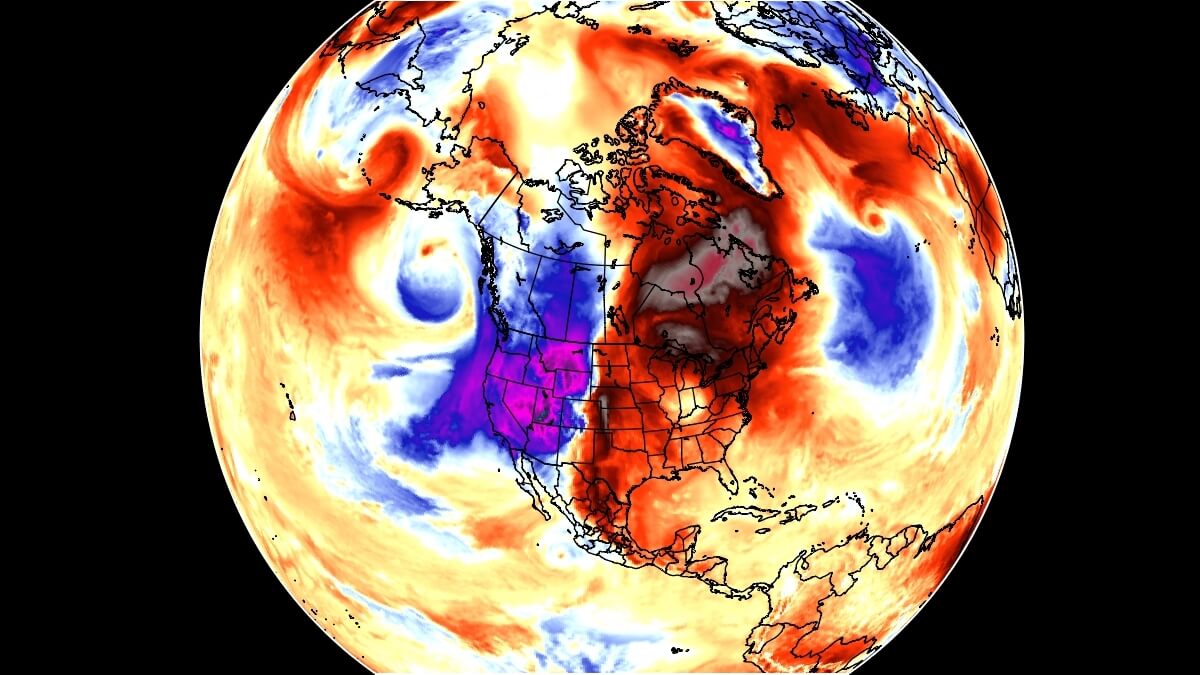 We often hear about these weather “oscillations” every cold season. One is AO, the other is NAO, then we have QBO, PNA, EPO, WPO, ENSO, SOI,… The list is almost endless.

What are these weather oscillations and why are they important? Oscillation generally means that something is oscillating, meaning that it moves back and forth. In weather and climate studies, this “movement” is usually up or down, the rising and dropping of a certain weather parameter, like temperature or pressure.

There is one of the more important oscillations, which, as the name suggests, is more specific to North America. It is called the PNA – Pacific North American index. It basically describes the pressure difference between the northwest United States and western Canada on one side and the southeast United States on the other side. 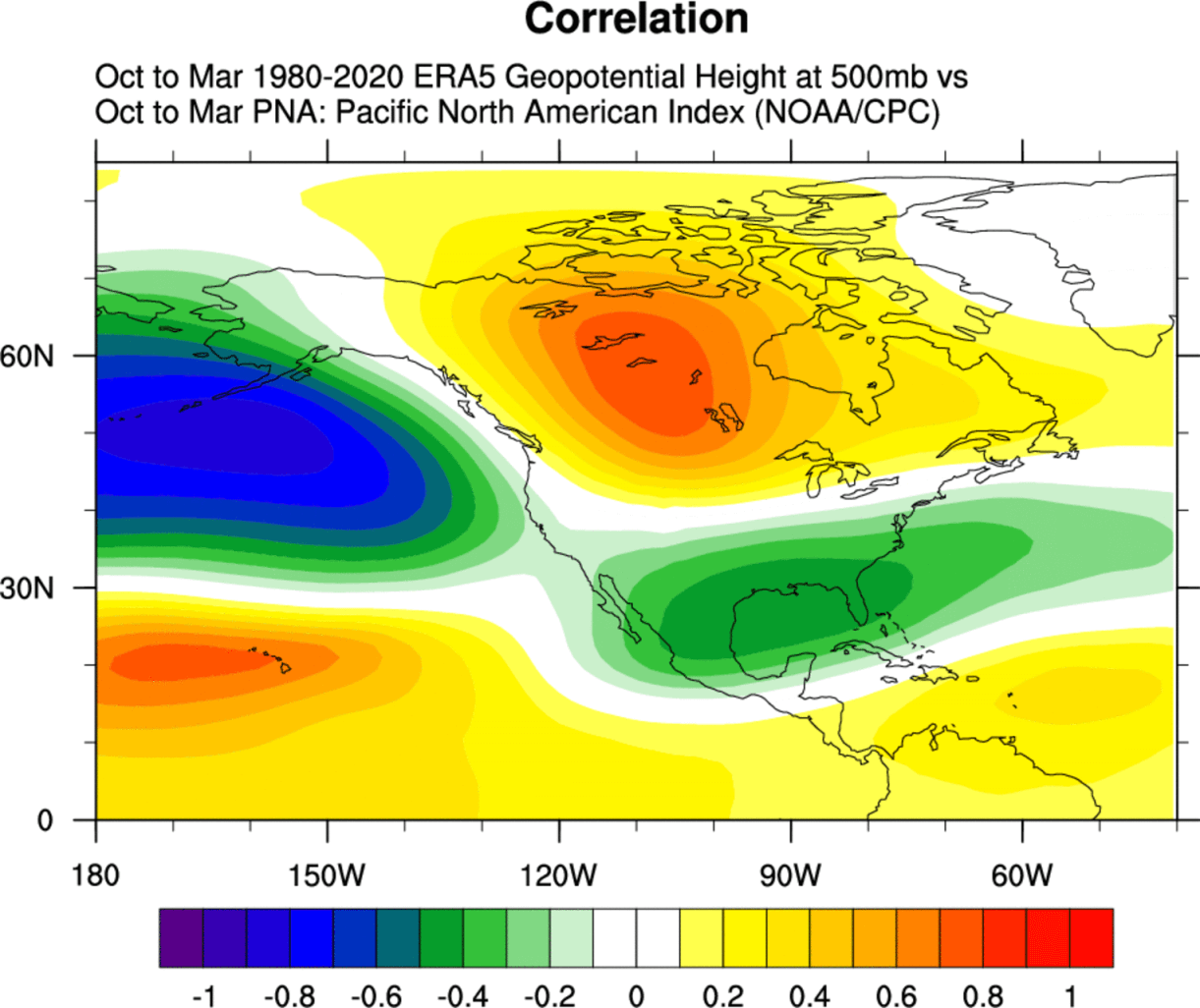 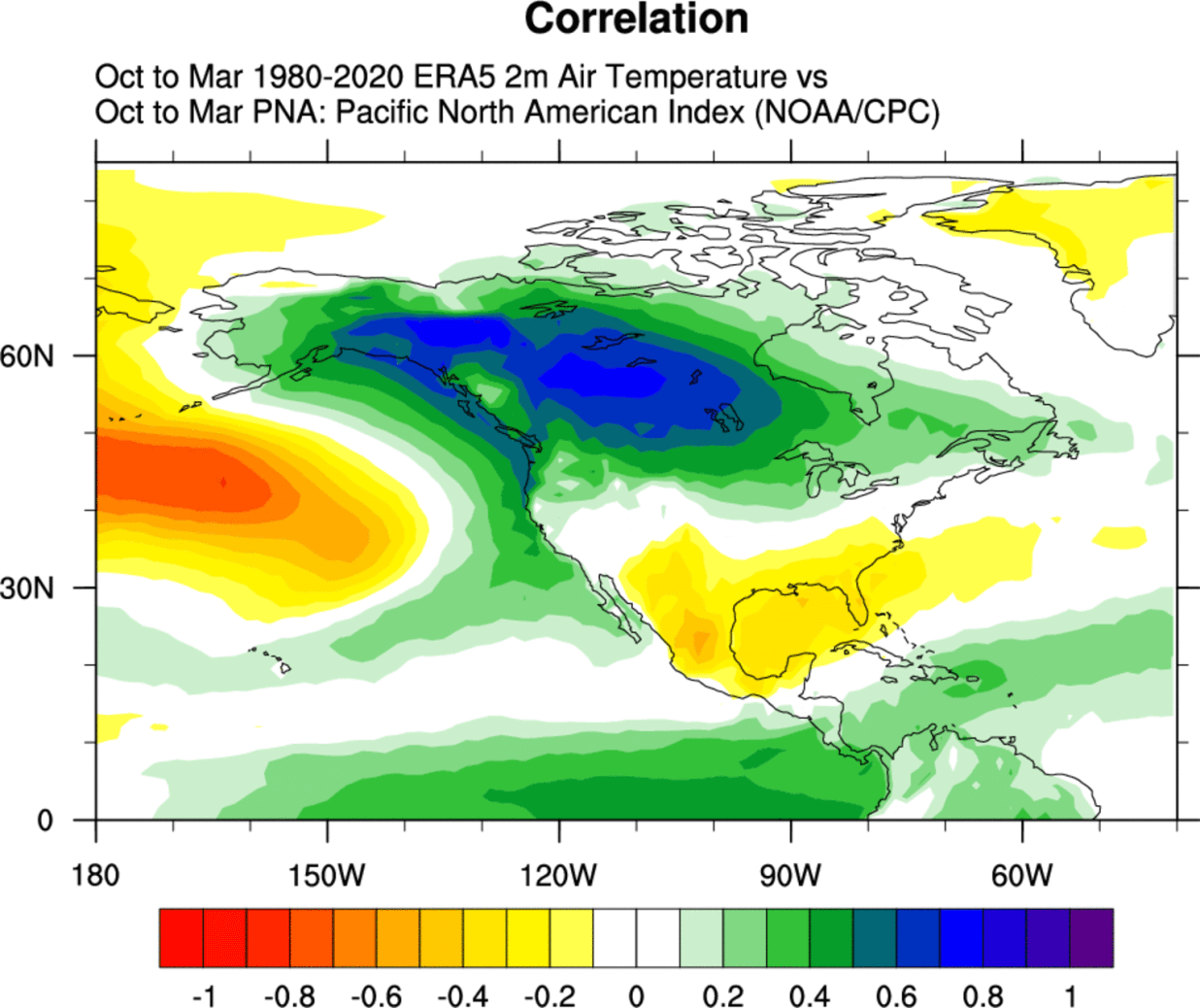 Current PNA forecasts take it into negative values. This means the opposite of what we see above. It means colder air and lower pressure in the western parts and warmer temperatures in the SE United States.

We will break down the October forecast into weekly segments, looking at the development through the weeks. First, we will start with the GEFS ensemble model for the first half of the month and then add the ECMWF and CFS models to get more ideas for the weather forecast in the second half of October for North America.

We have to add a disclaimer, that forecasts always change, especially in the extended range. So in the second half of the month, we are mainly looking at trends and patterns and comparing different models/scenarios.

October starts off with all oscillations in a negative phase, and we can see why. We have higher pressure reaching into the Arctic, keeping the arctic circulation negative. A low-pressure system is dropping down into western and northwestern Europe, keeping North Atlantic oscillation neutral to negative. A strong ridge is climbing up over the United States and further extends into eastern Canada. As the pressure over the west coast of Canada is lower, and east Canada is under a high-pressure zone, this corresponds to a negative PNA pattern. 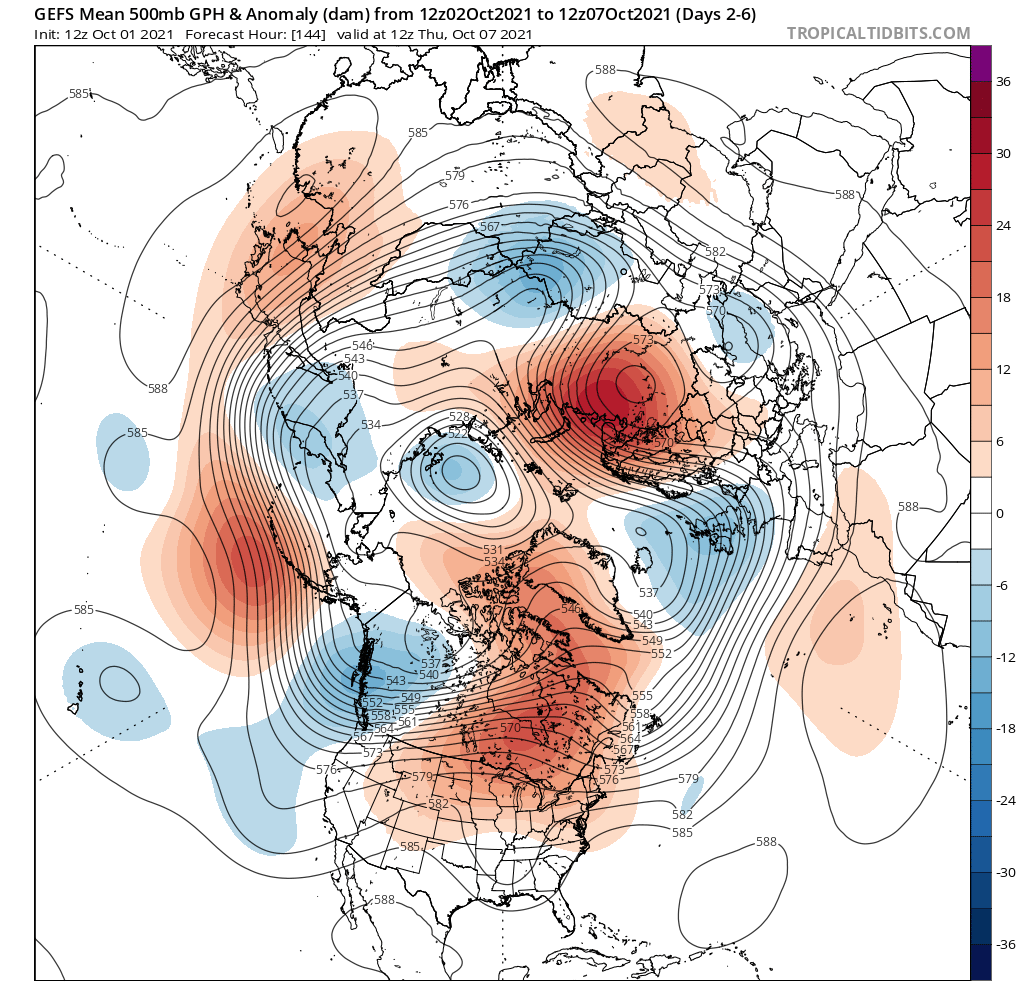 Going over North America, we can see much warmer than normal temperatures in the northern United States and in central and northeast Canada. For most of week 1, this blocking pattern has dominated. It brought warmer weather to much of the northern half of the United States. We can see colder air starting to descend into western Canada and the far northwestern United States. 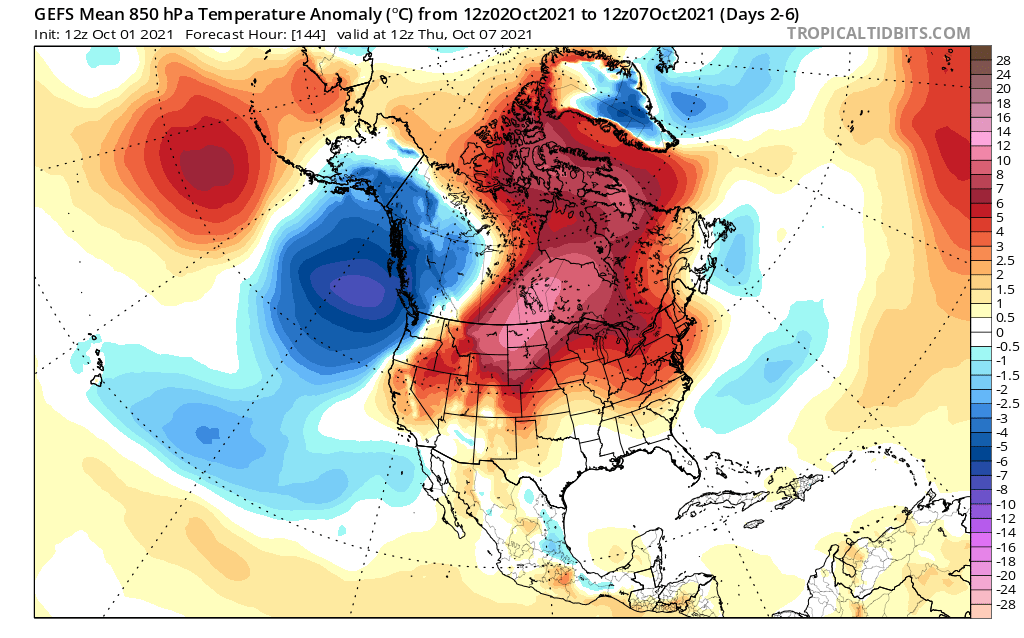 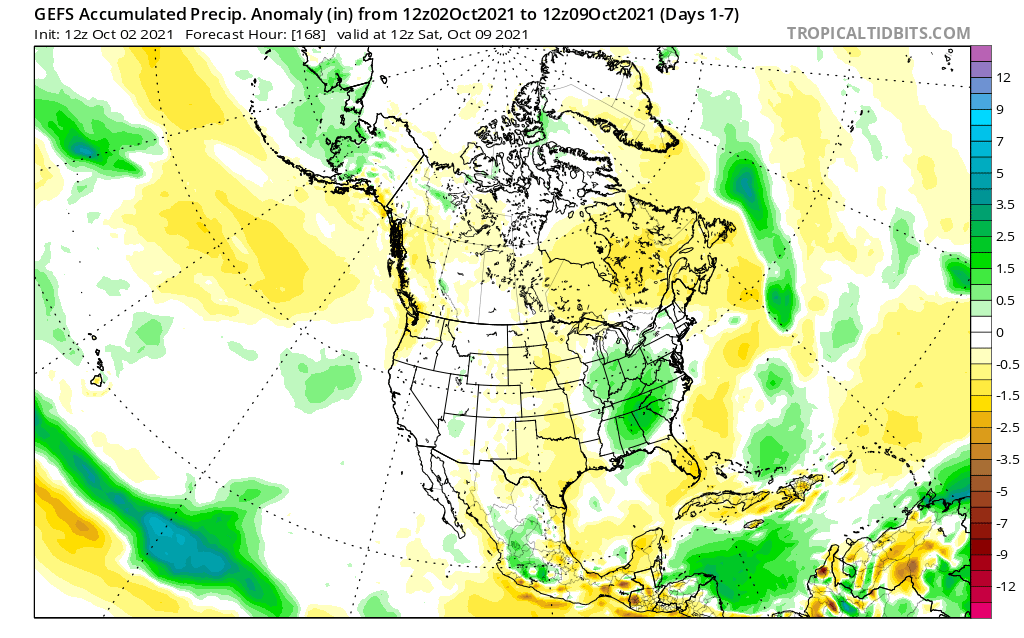 The weather forecast for week 2 shows progress in the pressure pattern and quite interesting weather dynamics.

The North American ridge will move slightly east, making room for a low-pressure zone to enter the western United States. This will establish a more zonal (west-east) flow over the country, and stormier conditions in the western half. 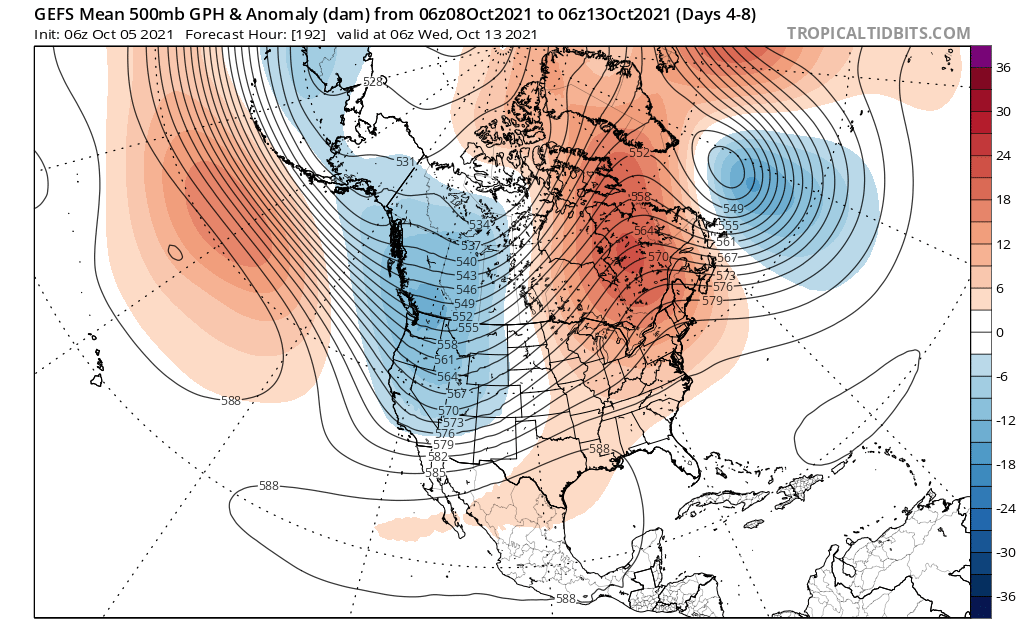 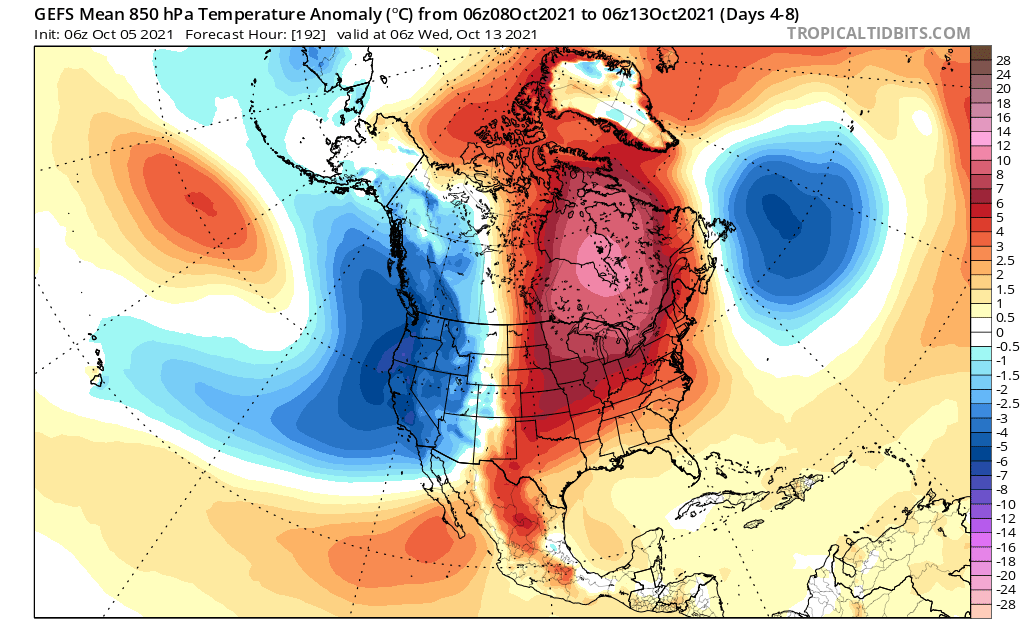 We can see wetter conditions forecast over the northern United States and southern Canada. That is due to the low-pressure system entering the western United States. It produces a warm moist westerly/southwesterly flow over the northern United States. Unsettled weather is expected in these regions, while the south-central states are forecast to see less precipitation, as the storm tracks remain further north. The central states are neutral, as they will likely see some precipitation and even severe weather. 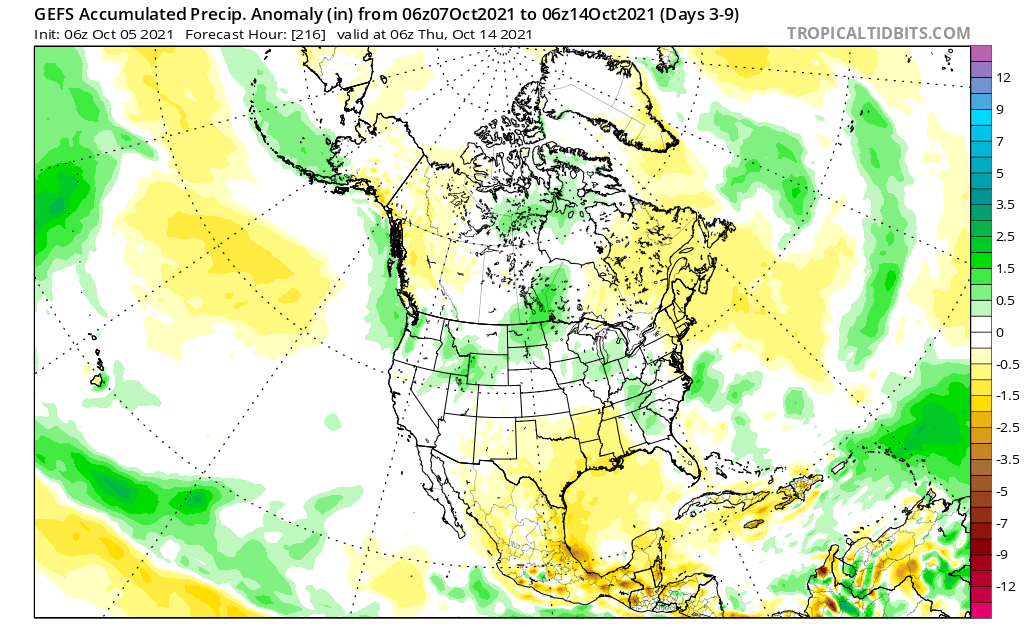 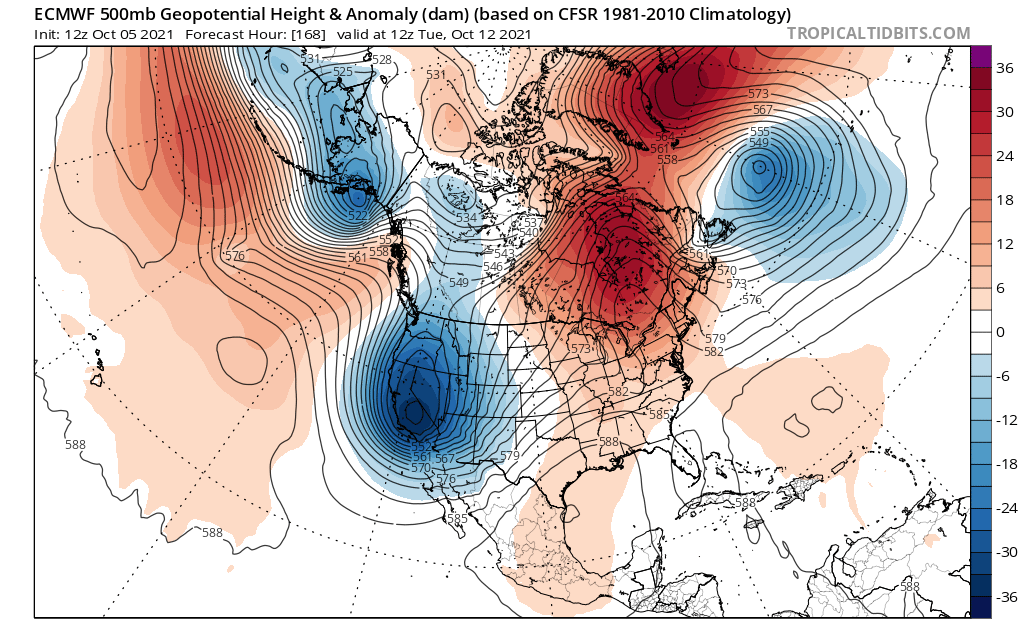 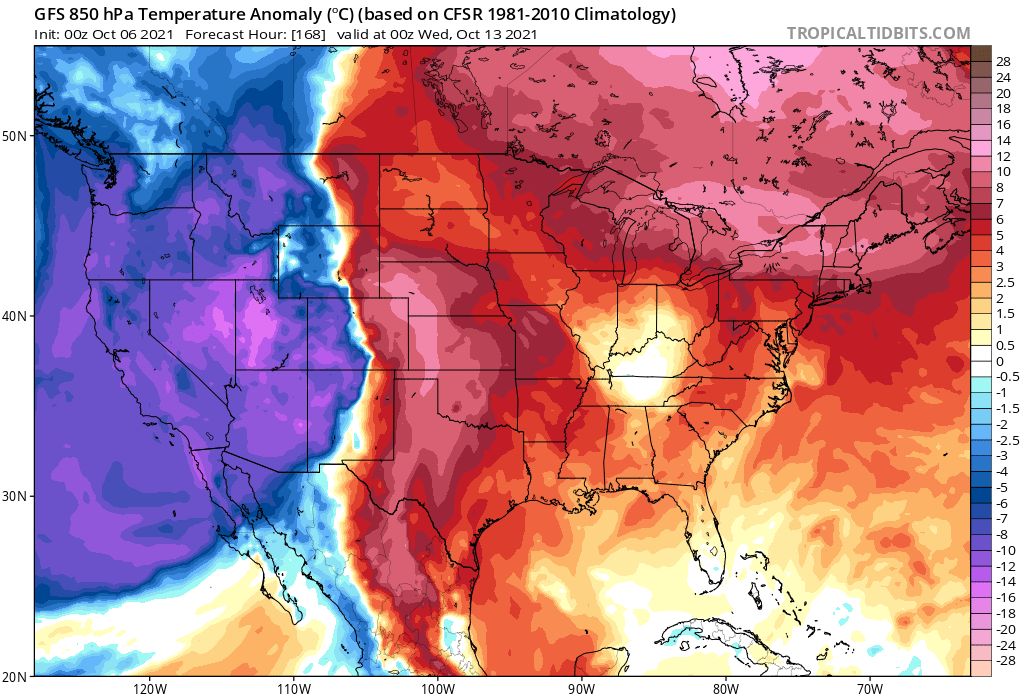 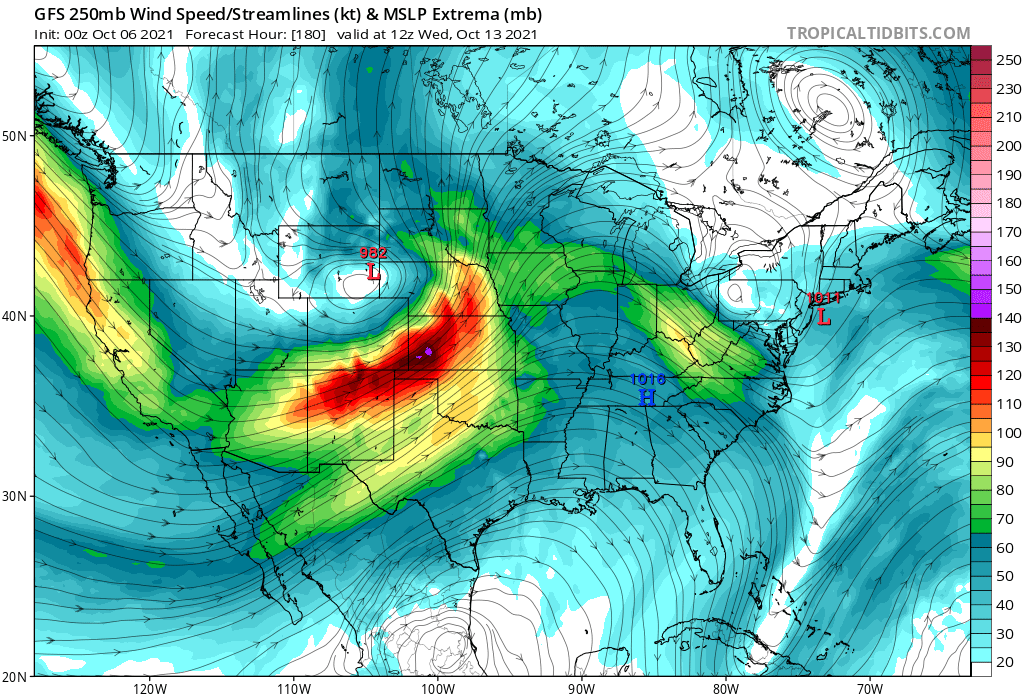 Going into week 3, we will look at three different models. First is the same GEFS model that we looked at for weeks 1 and 2 above. It shows a similar pattern as in week 2 over North America, with a slight difference. The low-pressure zone over the west seems to back off slightly, while the ridge remains over the east, but also lifting slightly north. 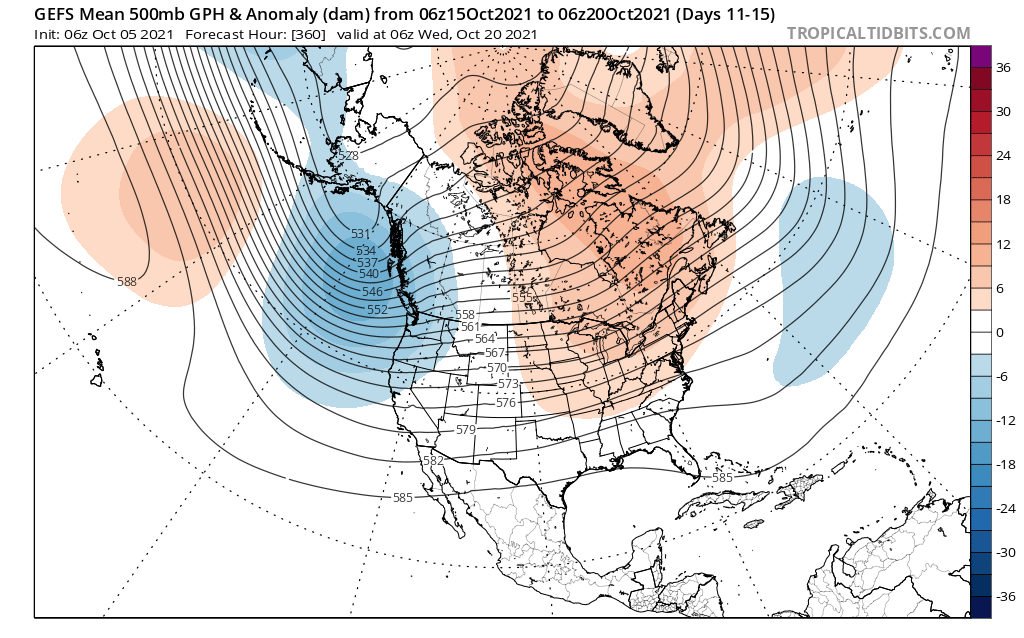 Looking broadly over the temperatures, we see the warmer temperatures will stay over most of central and eastern Canada and the United States. The colder air is forecast to move out in the west, as the lower pressure area lifts slightly back out, but remains in the northwest. 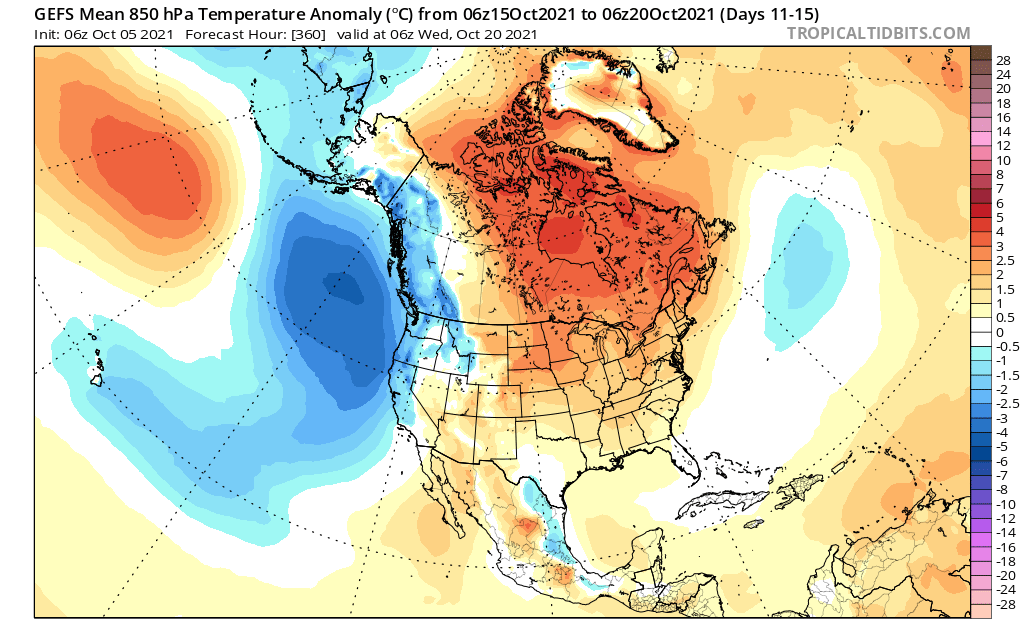 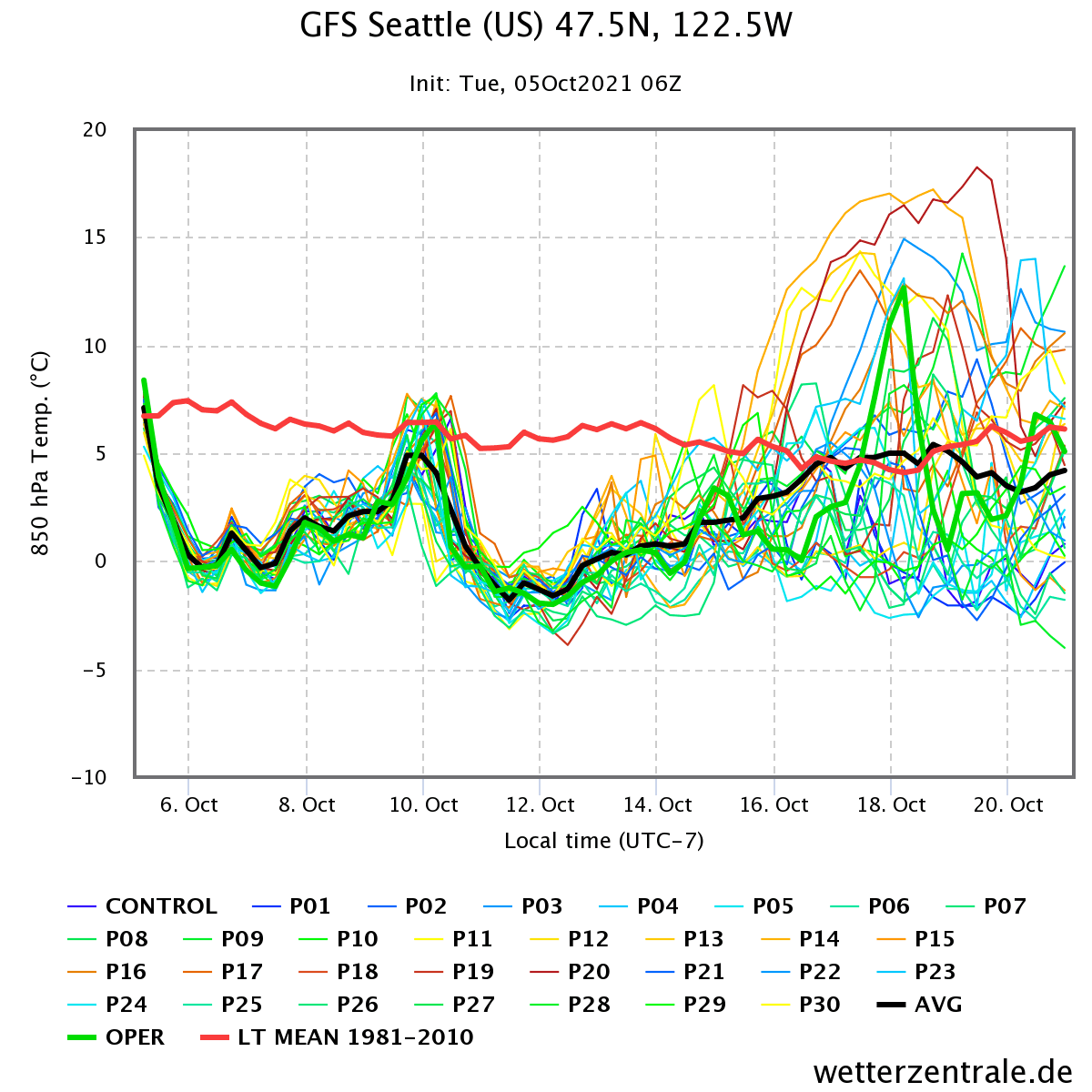 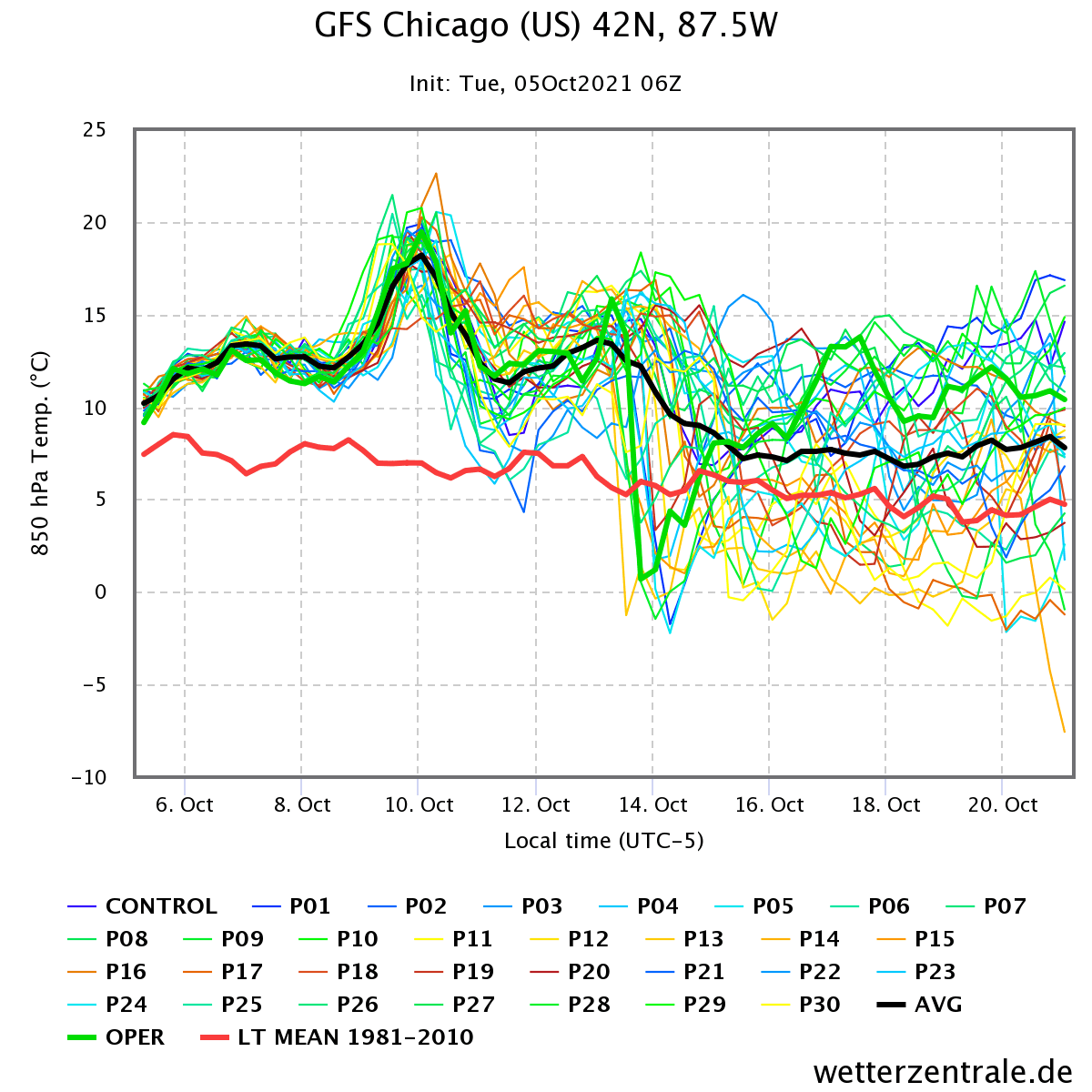 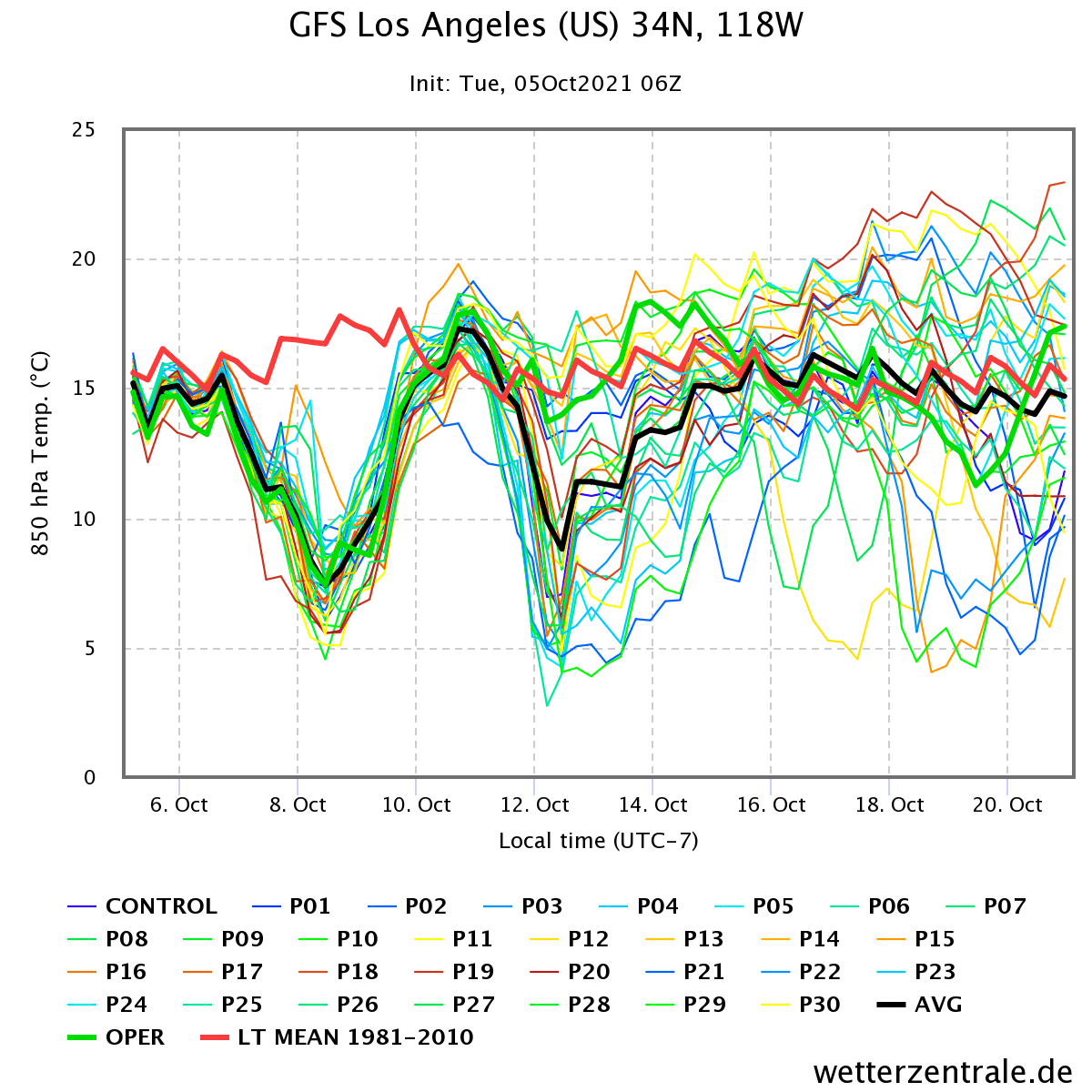 Adding the ECMWF model, it shows a similar pattern, with a high-pressure zone over eastern Canada and the northern United States. It features the same low-pressure area over western Canada, also keeping it further northwest than in week 2. 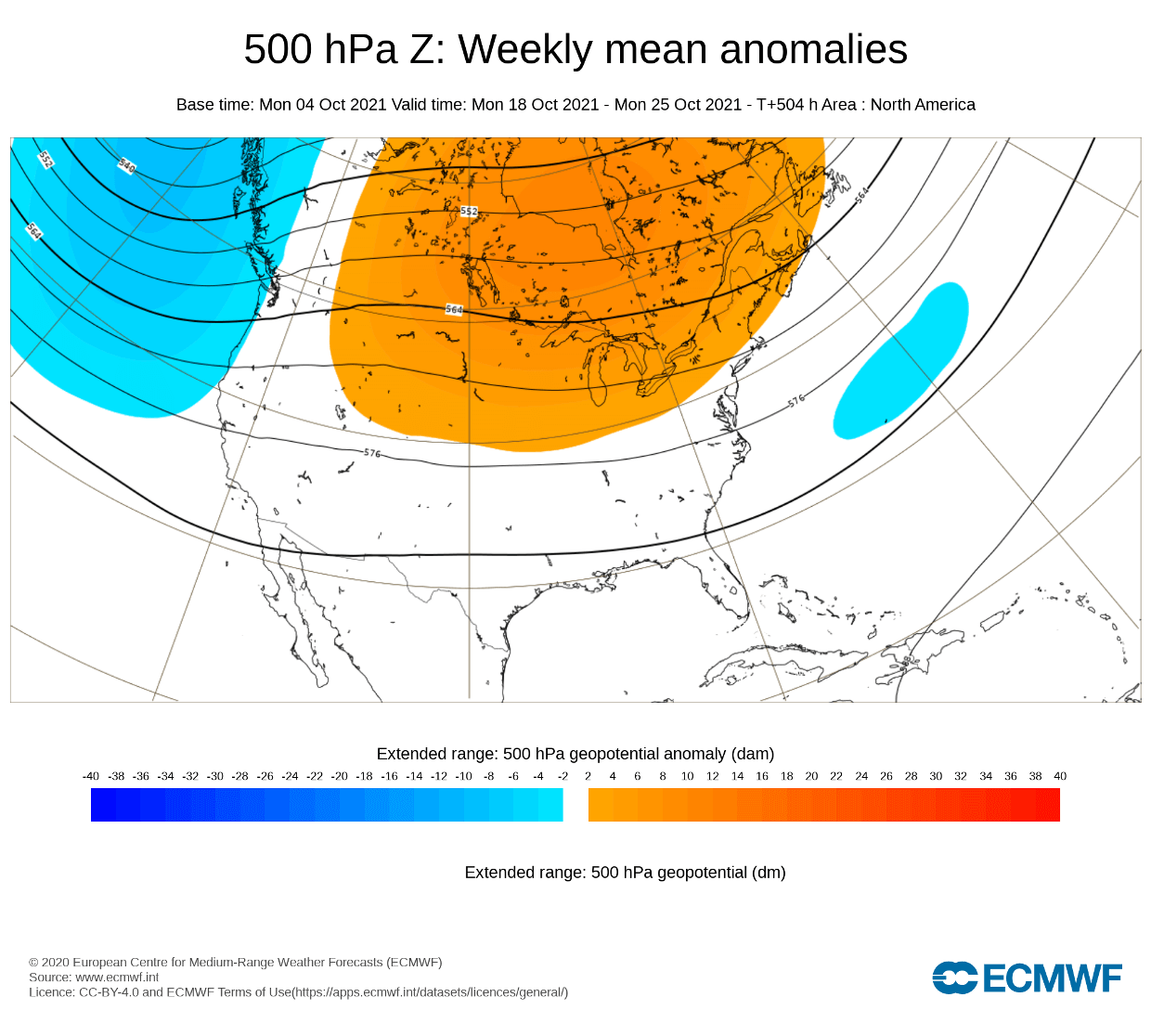 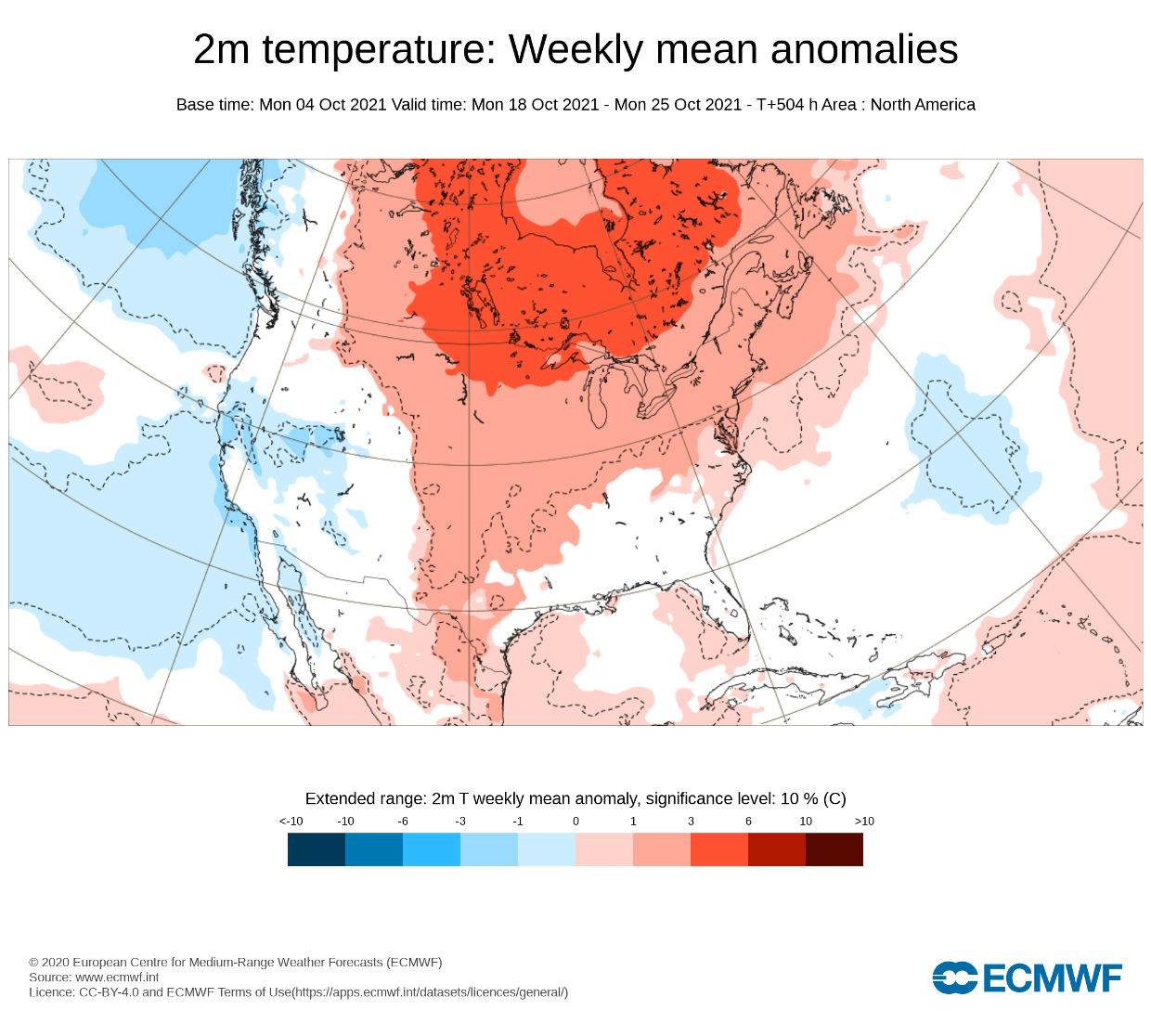 Adding another model is the CFS from the NCEP center in the United States. It also has a strong high-pressure area over eastern Canada and a low-pressure zone over western Canada and the Aleutians. So far, the pressure pattern forecast for week 3 is mostly consistent within all three models. 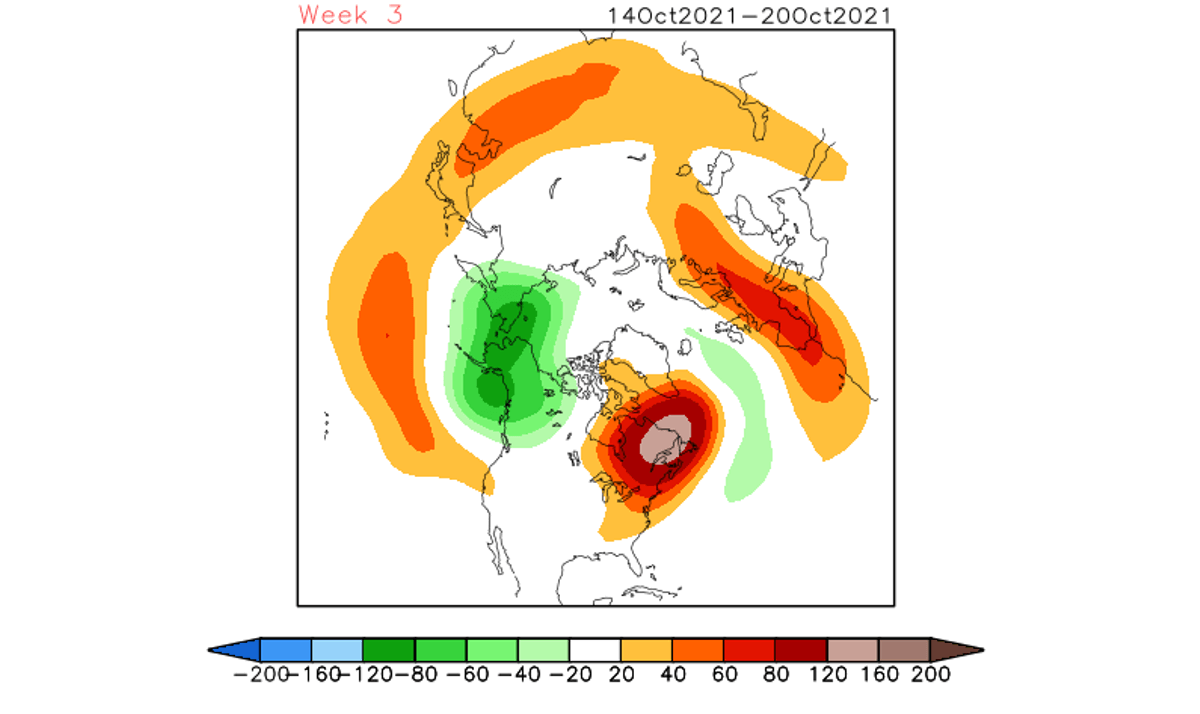 The CFS is forecasting much warmer than normal conditions over central and eastern Canada and the eastern United States. It keeps some of the cooler air still over the western half of the United States. 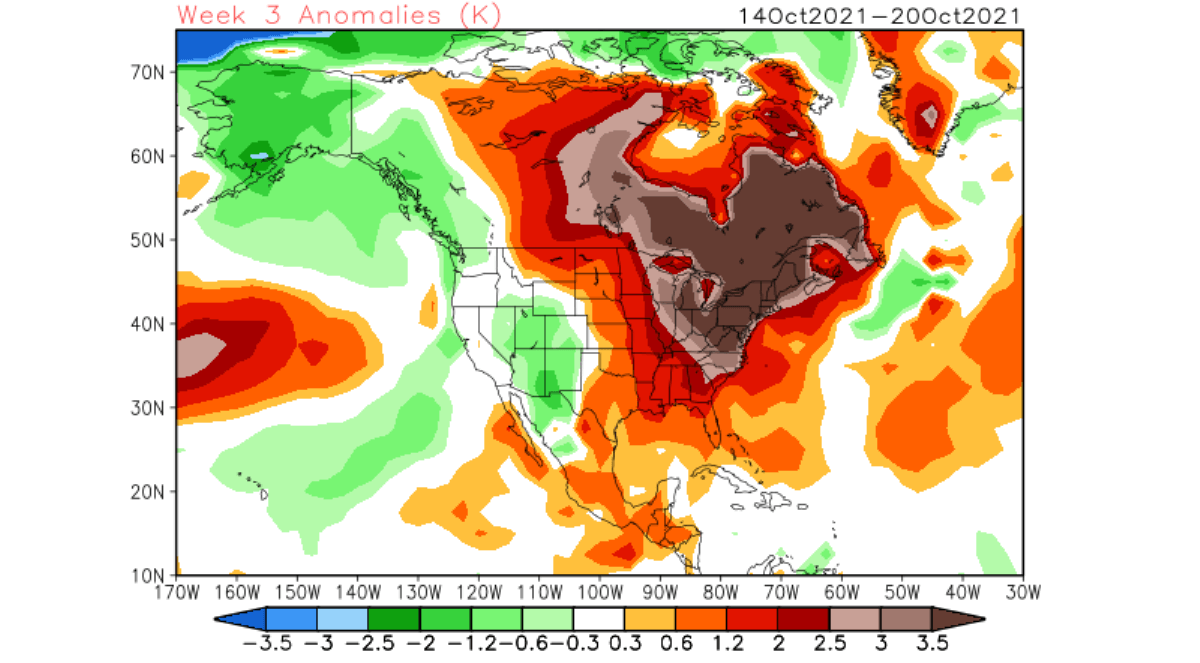 We will only keep the ECMWF and CFS for week 4, as the GEFS loses most of its signals at this range, which is normal for such an ensemble forecast at this extended range. This range is far out, so we only look at hints of “highs and lows” in the pattern and the strength of the signals and confidence between different models.

For week 4, the ECMWF shows the high-pressure area staying stable over eastern Canada and crawling into Greenland. A low-pressure zone remains over western Canada and over the North Pacific ocean. 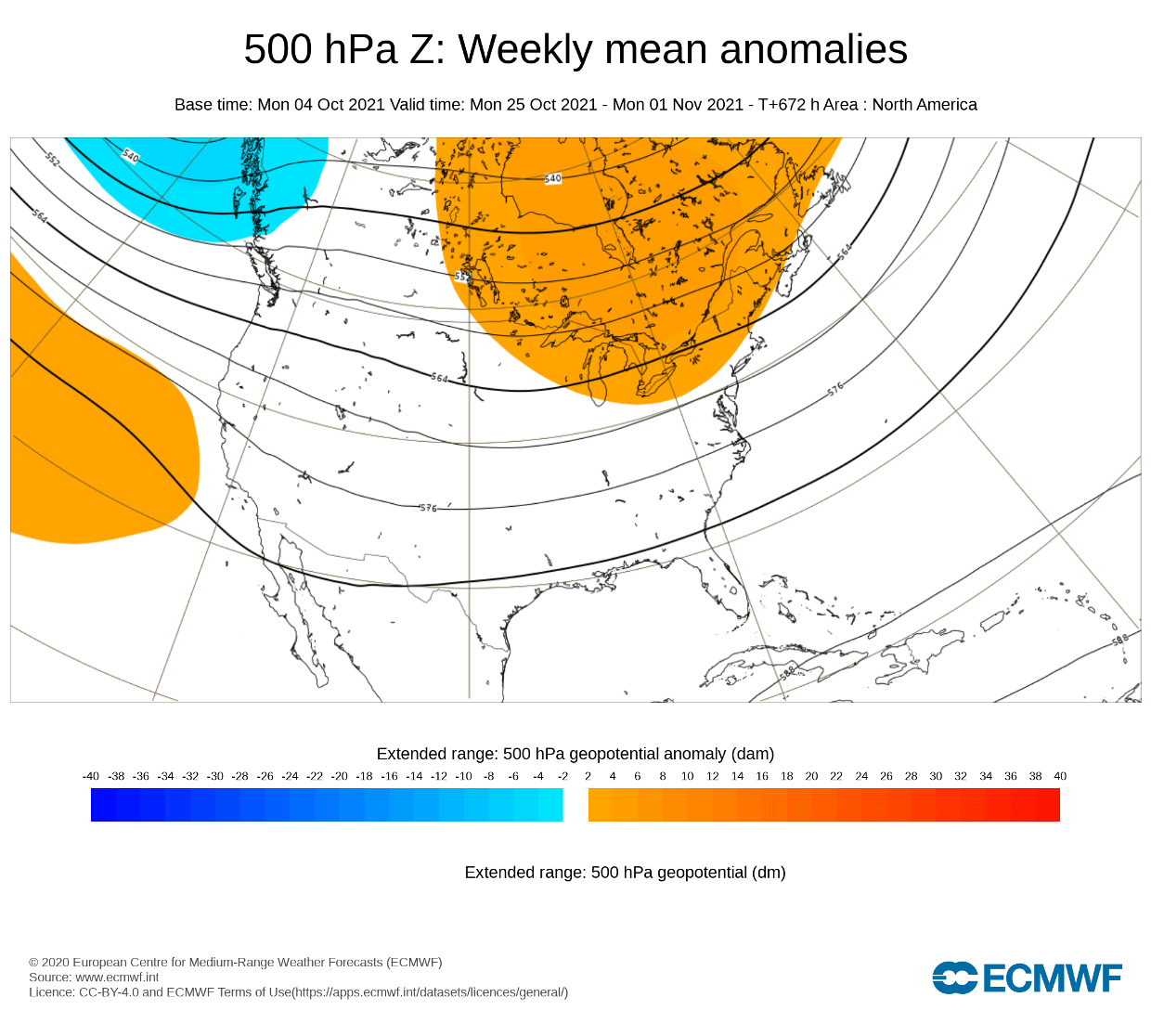 Looking at the temperature forecast, we have a similar pattern to week 3, keeping most of the western United States neutral to cooler than normal. But central and eastern regions stay under warmer than normal temperatures. A transitioning low-pressure system is likely in this region, underneath the higher pressure further up in eastern Canada. 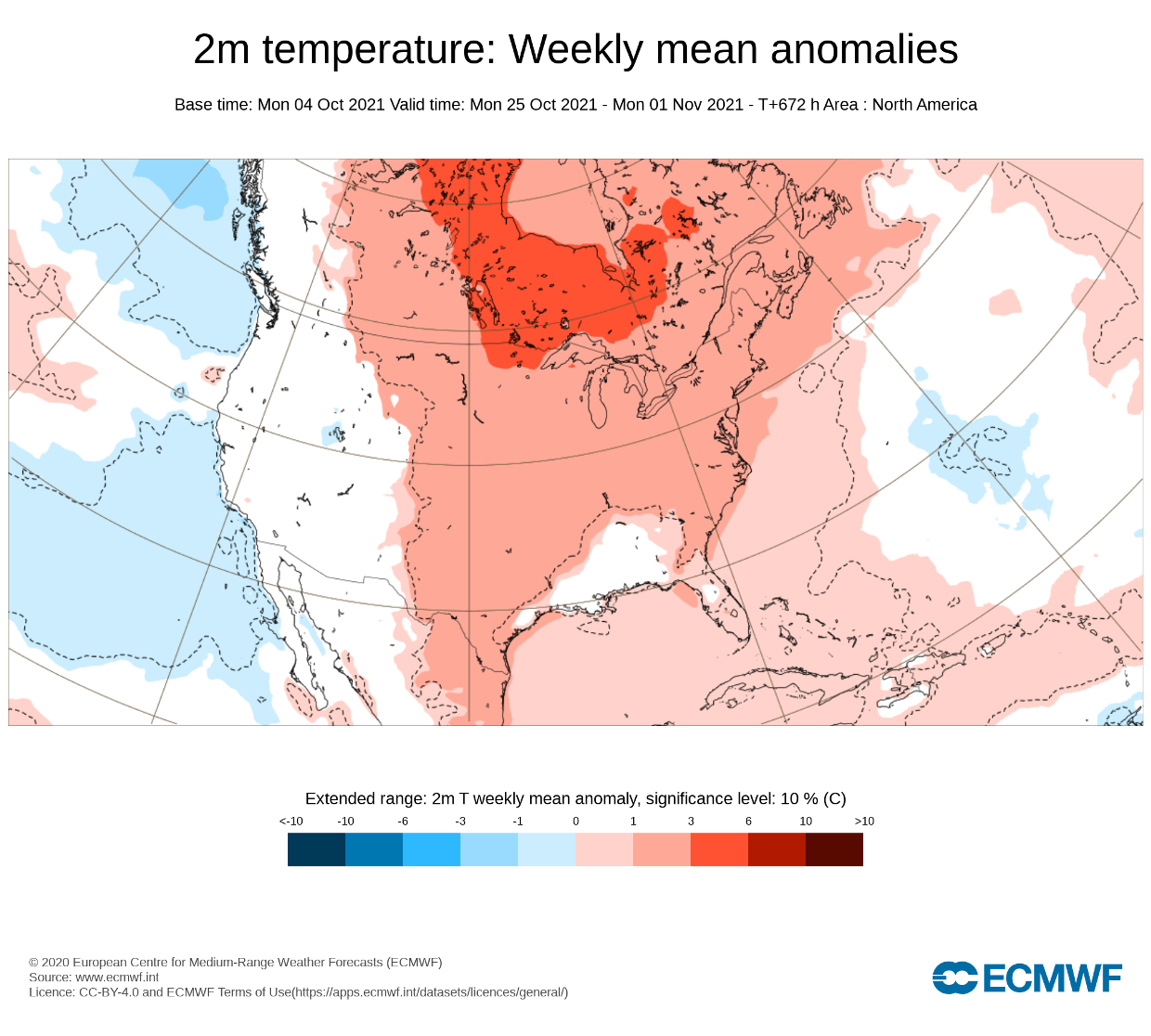 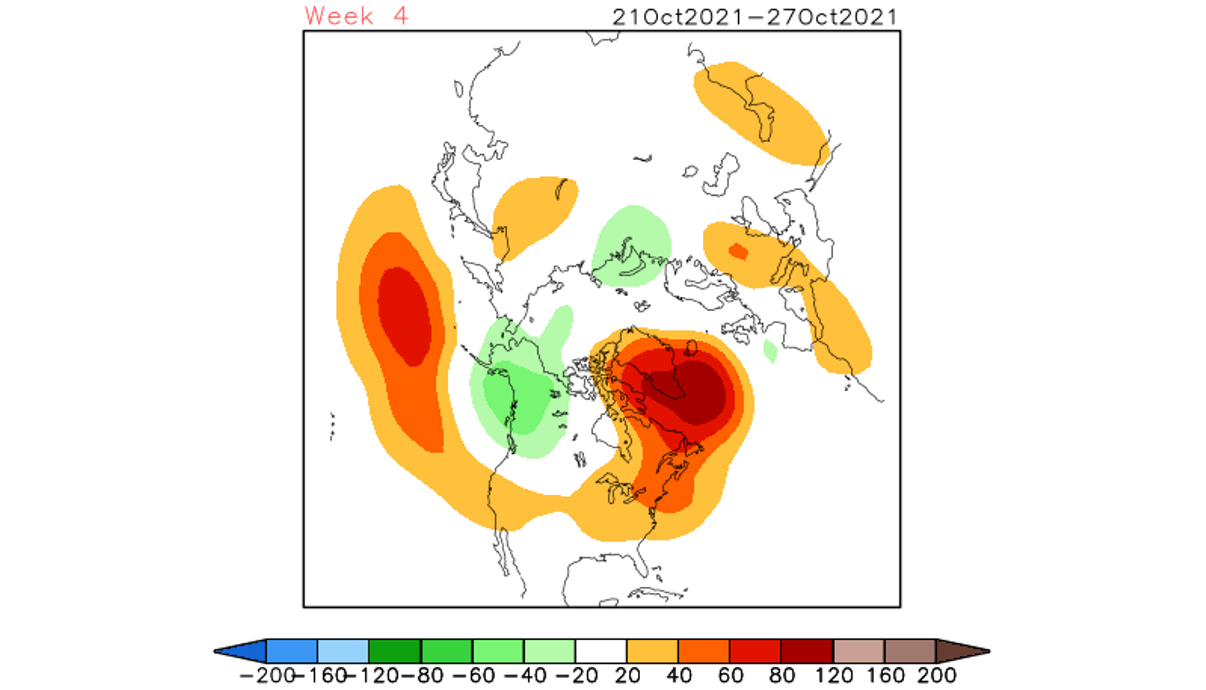 The temperature forecast for week 4 of October shows warmer conditions over most of the United States and Canada. One exception is the northwestern United States, western Canada, and Alaska, with colder than normal temperatures. 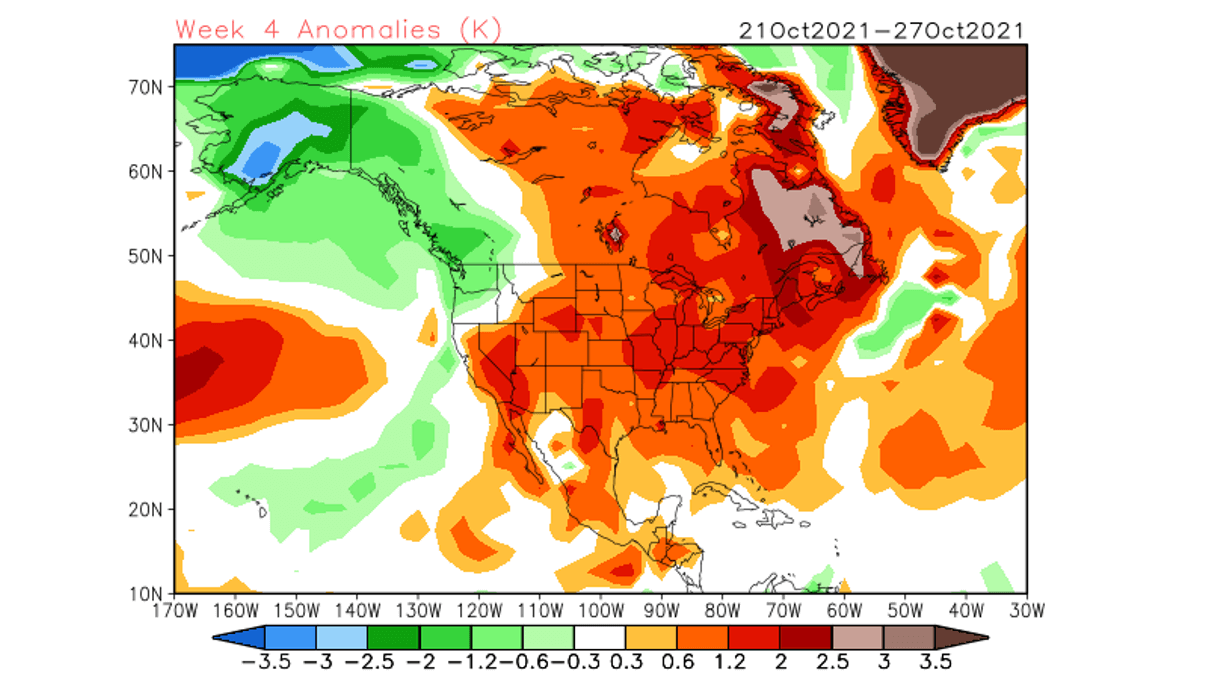 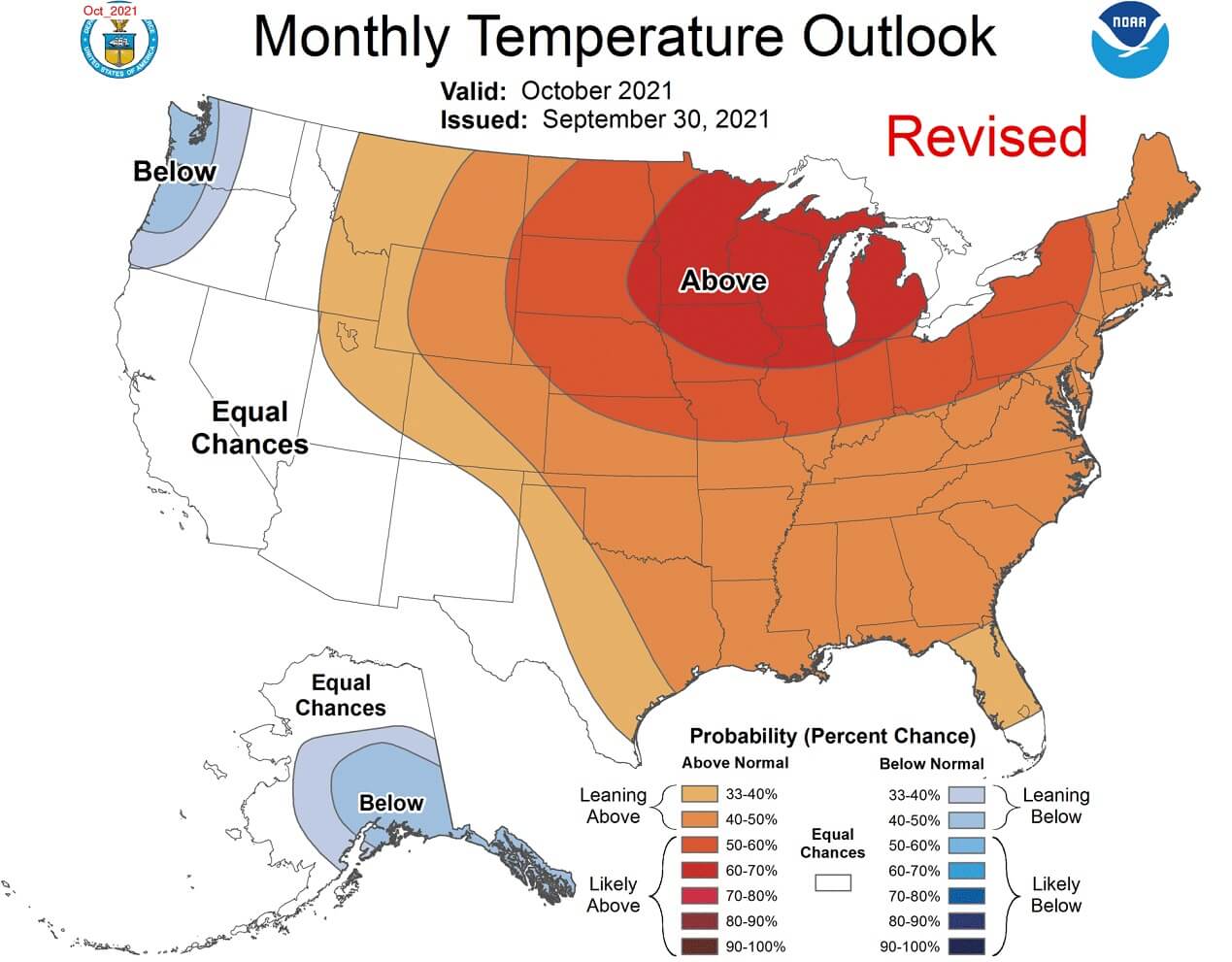 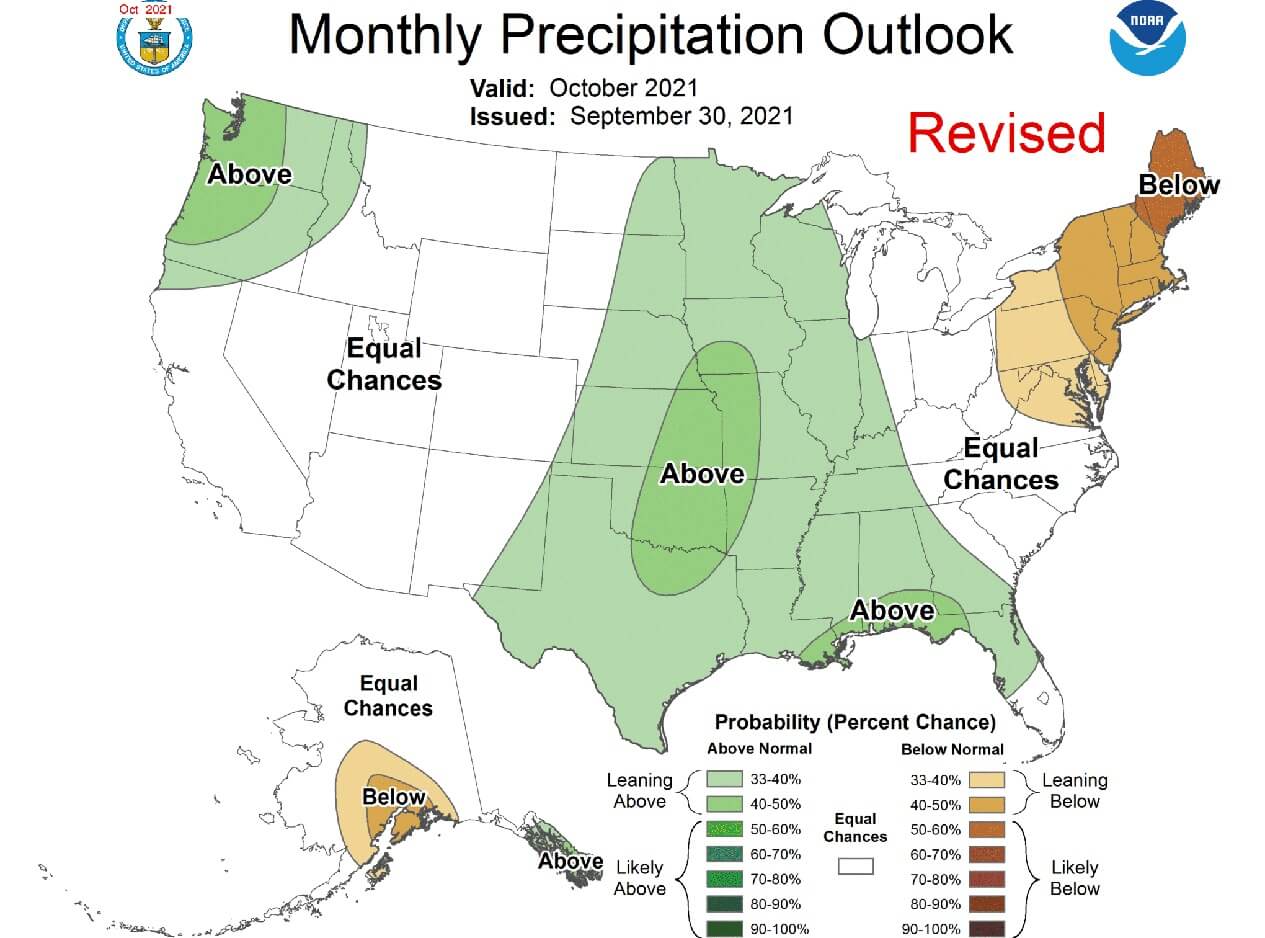 Pushing the forecast into week 1 of November 2021, we see the pattern staying stable over North America. This is a more negative NAO development, with higher pressure crawling over Greenland and low pressure staying over western Canada. 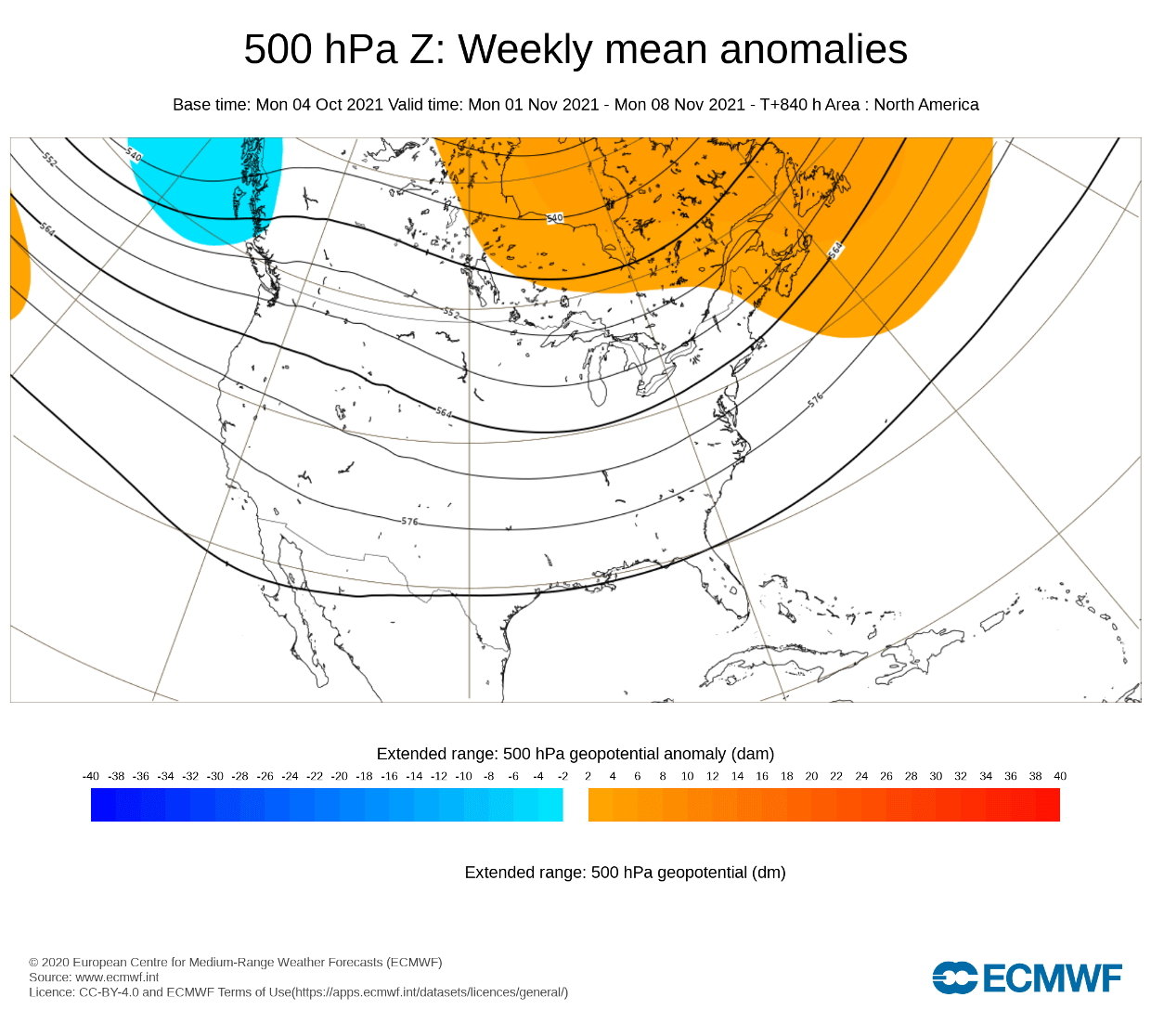 However, we do see a change over the United States, as the warmer temperatures are gone from most of the central and northern regions. This could indicate a more typical negative NAO pattern, as it allows some colder air transport from western Canada into the northern and central parts of the United States. 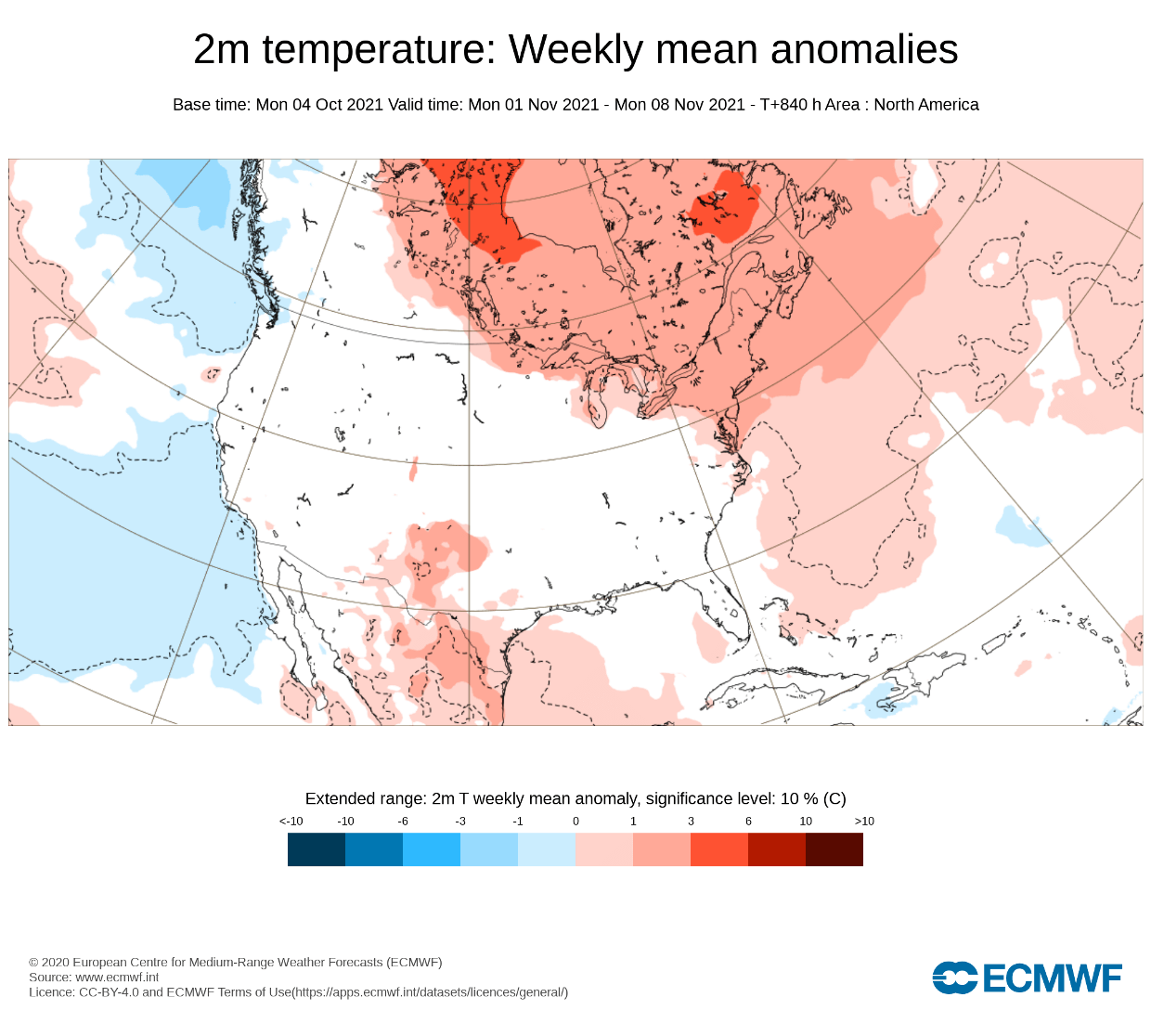 We will release regular weekly and monthly updates for the upcoming cold season as fresh forecasts are produced. So make sure to bookmark our page. Also, if you have seen this article in the Google App (Discover) feed, click the like button (♥) there to see more of our forecasts and our latest articles on weather and nature in general.

SEE ALSO: *Winter forecast 2021/2022* First look at Winter reveals a shift in the jet stream due to the new La Nina, felt in North America and in Europe