The mid-October brings a significant change in the general weather pattern across the United States. A large and deep trough enters western CONUS, releasing a powerful winter storm that will blanket the northern Rockies with deep snow. While multi-day severe weather is forecast for the Great Plains.

Unusually warm weather that has been ongoing since the first cold outbreak at the beginning of this fall season, is finally forecast to be flushed away across part of the Contiguous U.S. this week.

A progressive weather pattern will take place across the North American continent, extending through the mid-October period. It will bring unseasonably cold weather into the western U.S., as well as the first significant snowstorm and blizzard for the Northern Rockies. 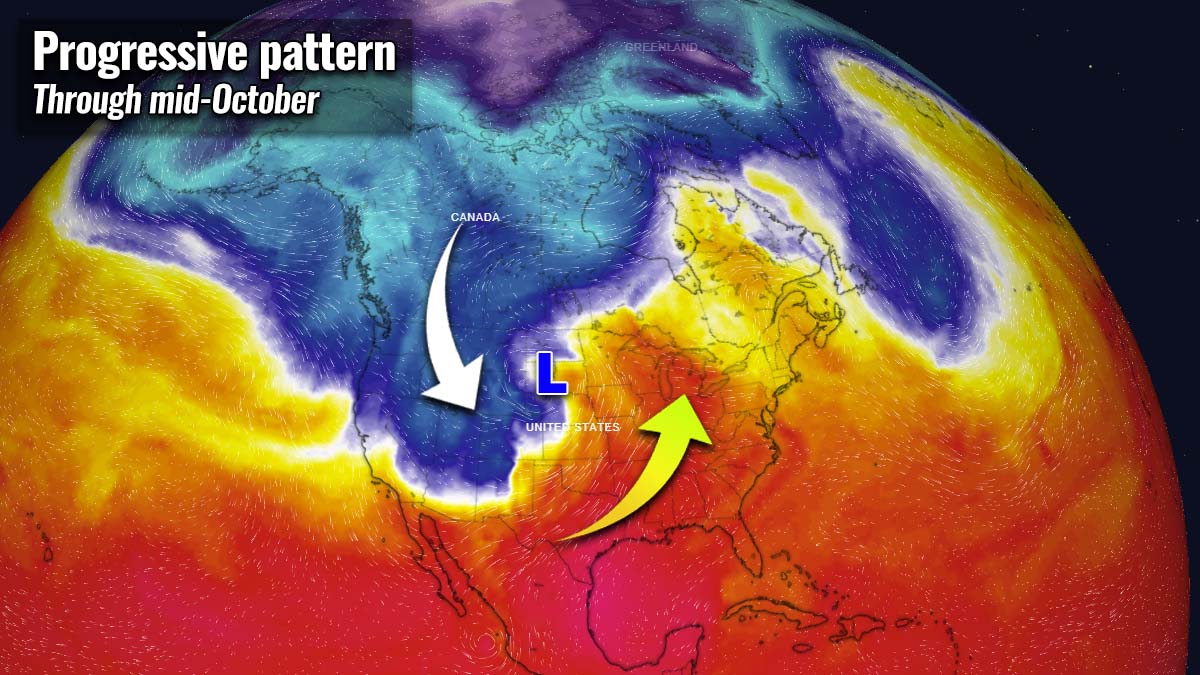 Meanwhile, unseasonably warm weather continues across the south and to the east of the developing winter storm.

The video animation below indicates how the pattern evolves and a strong frontal system with deep surface low ejects the Rockies and moves towards the Upper Midwest over the next two days.

The winter storm will first develop across the Northwestern U.S., gradually advancing towards the northern Rockies Monday night with a rapidly developing surface low taking place on Tuesday.

OKLAHOMA HIT BY A WIDESPREAD SEVERE THUNDERSTORMS OUTBREAK ON SUNDAY

An active period of strong severe thunderstorms has developed across the southern Plains Sunday night, as an intro into the multi-day period of dangerous storms that are expected for the Great Plains this week. A frontal system moved through Oklahoma and northern Texas, with widespread thunderstorm activity.

More than 10 tornadoes were reported from Oklahoma and Missouri on Sunday, along with several reports of very large hail up to baseballs around Norman, OK last night. 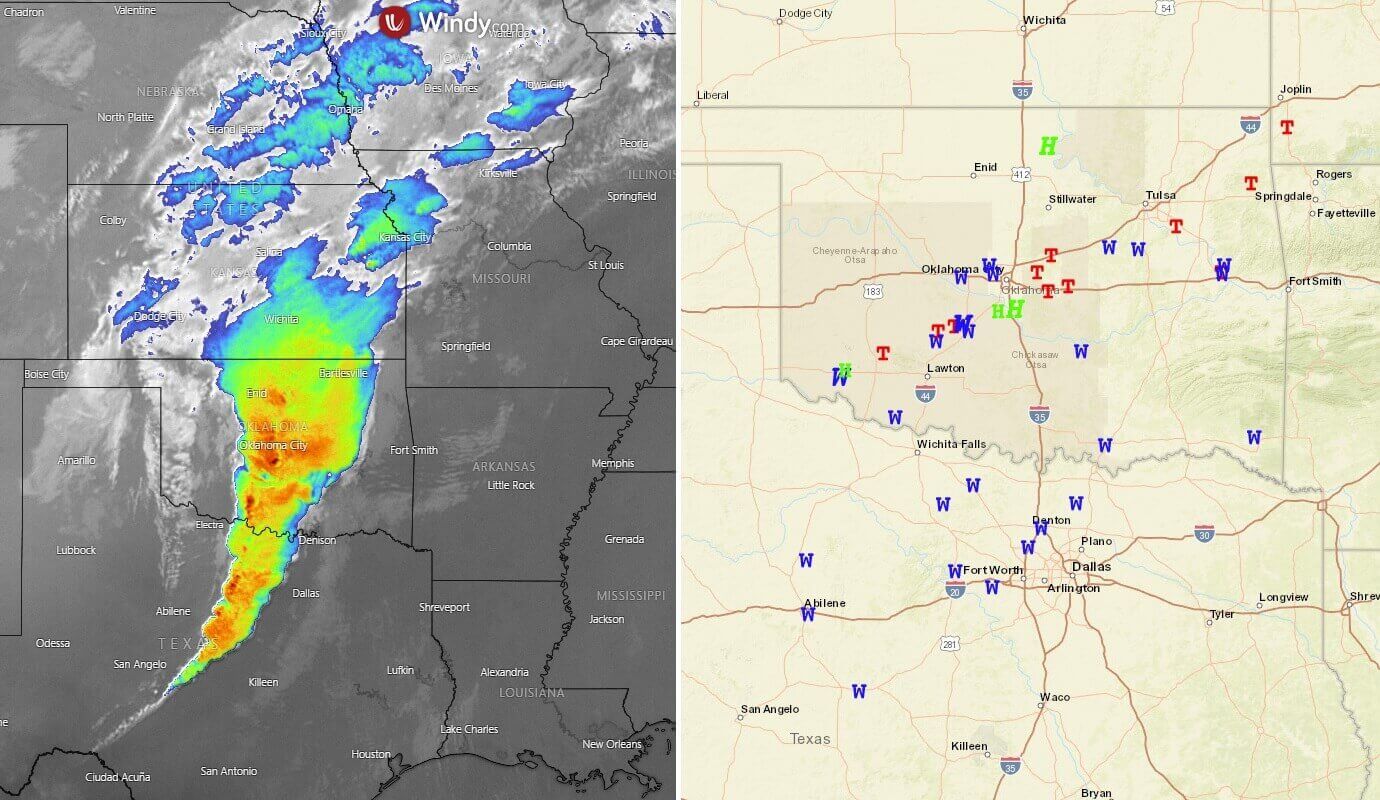 And now more severe storms are forecast for the Plains, while to the north, harsh wintery weather is forecast.

A VERY DEEP UPPER LOW DEVELOPS ACROSS THE NORTHWEST U.S.

The general weather pattern that is forecast to develop a first significant winter storm across the Northwestern U.S. is characterized by an impressive and very deep upper trough, transforming into an upper low while entering western CONUS Monday night. 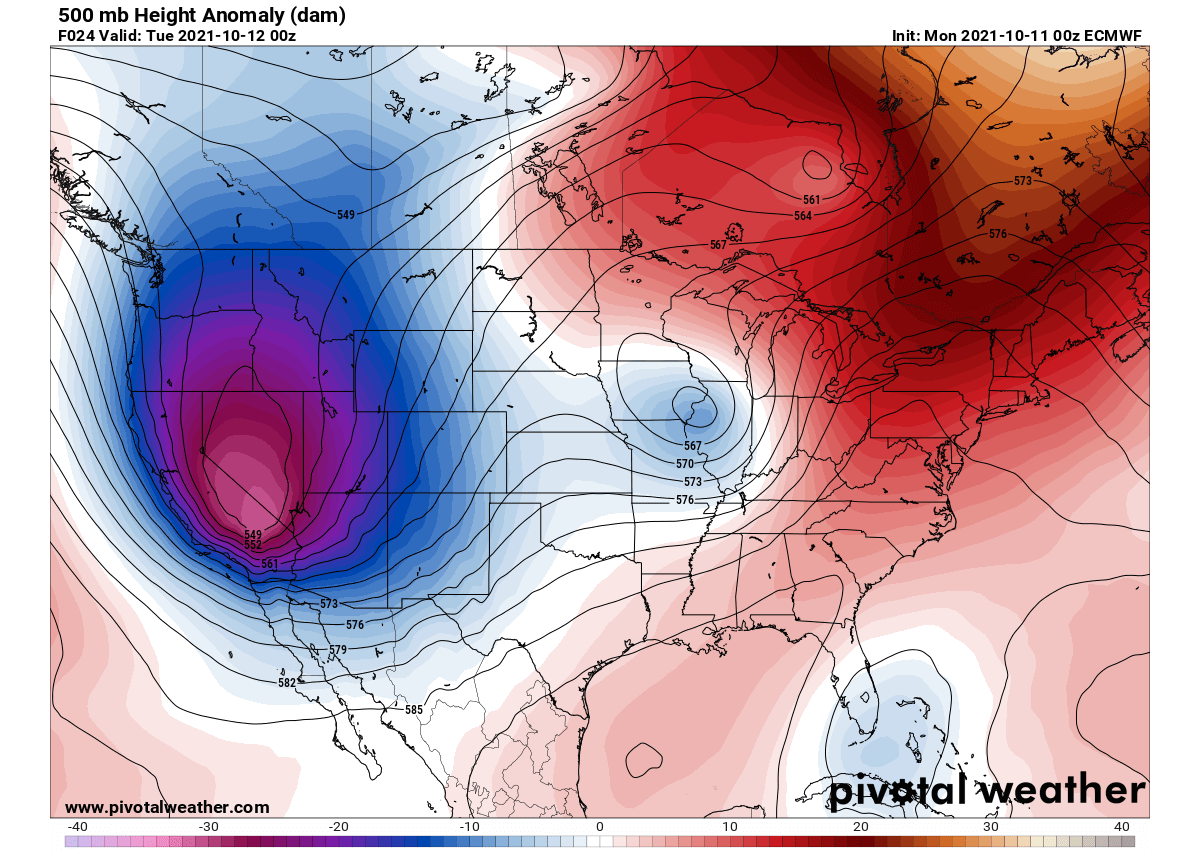 The upper low is particularly deep and will remain intense while moving east-northeast across the northern Rockies through Tuesday, releasing a significant surface depression in their wake. Conditions will be rapidly be deteriorating with the winter weather forecast to intensify over Nevada, Idaho, and Montana.

With the deepening surface low tracking from the western U.S. across the Rockies into the northern Great Plains through Tuesday, winds will also increase and severe blizzard conditions are expected to develop. 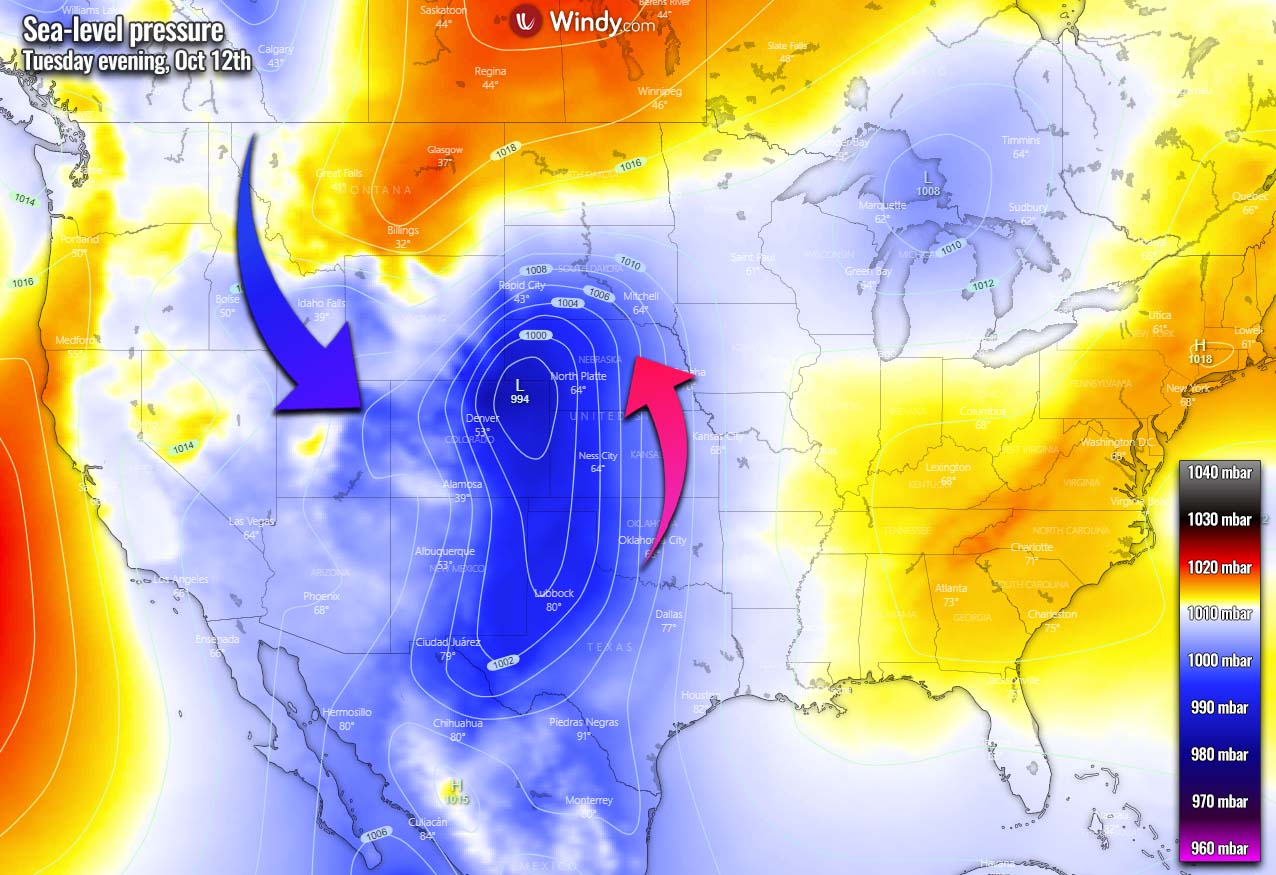 Then, much colder weather will spread in the system’s wake, while the front end will deliver strong warm advection across the Great Plains, becoming unstable with time.

After a period of pretty warm weather just recently, the weather change and much lower temperatures will be particularly significant across the west and the northwest U.S. The coldest air mass of the fall season 2021 will spread far south, reaching California and Arizona as well. 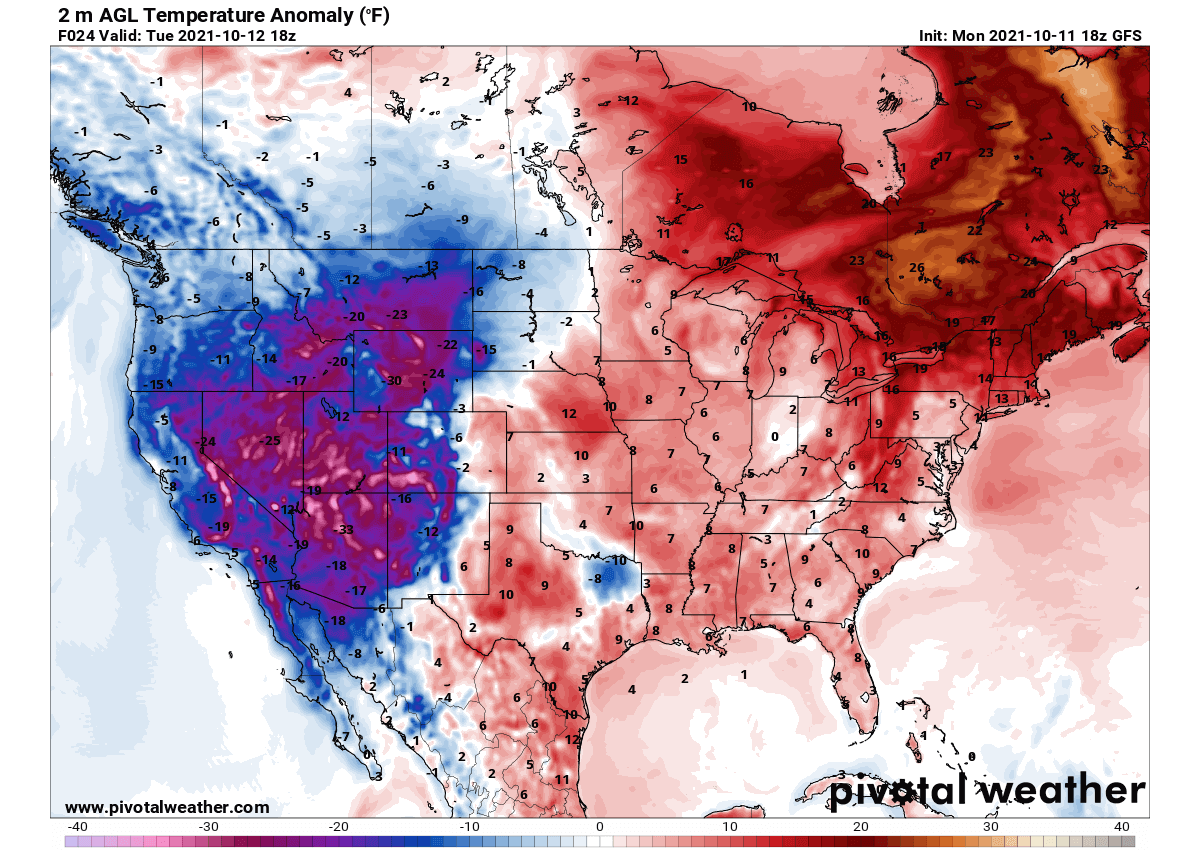 These extremely low temperatures for this period could even challenge record lows for the mentioned states, locally resulting in a significant frost danger for the remaining crops. Tuesday is forecast to be the coldest day, however, as with the low moving further northeast on Wednesday, at least a few degrees higher temperatures are forecast.

If the fall colors haven’t started in your state or region yet, they surely will quickly arrive now.

Snowfall has already begun increasing across the West, with Winter storm warnings are already in place across parts of Wyoming, Montana, and Idaho Monday night. Additional winter weather advisories also farther south, including in parts of Colorado, Utah, and Nevada. 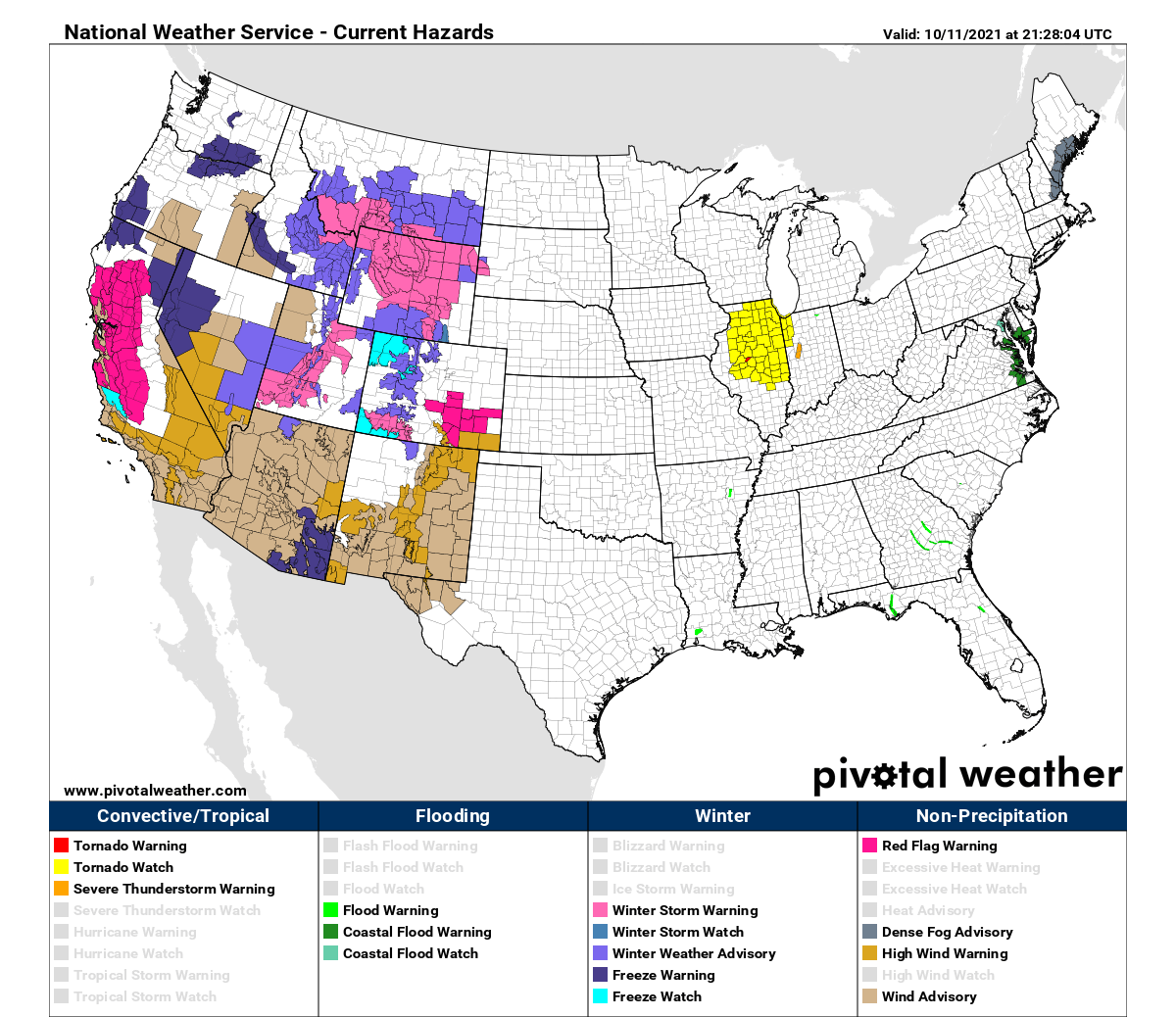 The high mountainous terrain across Montana, Idaho, Wyoming, and Colorado will see a significant increase in snowfall intensity as the system advances through Tuesday morning, remaining heavy through the day. Snow will likely be measured in feet, with locally 20-30 inches likely to accumulated by Wednesday.

With the low deepening and advancing across Colorado towards the adjacent High Plains, precipitation will also increase along the warm front across the western Dakotas and further south along the cold front extending from Nebraska through Kansas to Oklahoma. 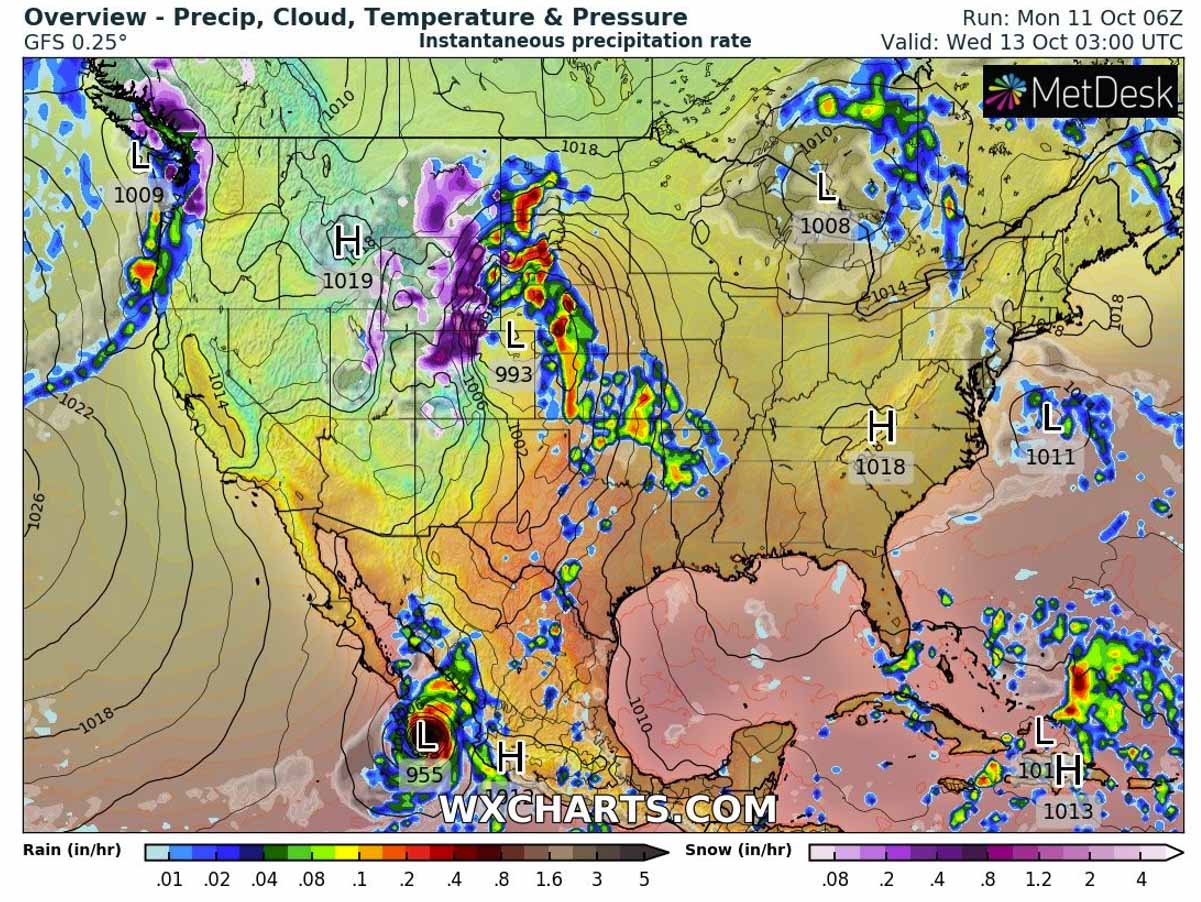 Snow will be very intense across the rest of the Rocky Mountains on Tuesday and accumulate fast. But even the areas further south, across northern Arizona and northwestern New Mexico, could see some snow flurries Monday night into Tuesday morning.

Some chances for snow mixing also exist along the Front Range from Cheyenne, Wyoming to Fort Collins and Denver, Colorado area, and snow accumulation is rather minimal. But if the precipitation will be intense enough, the first snowflakes could be at least mixing down to lower elevations as well. But any significant snowfall is rather unlikely this time. 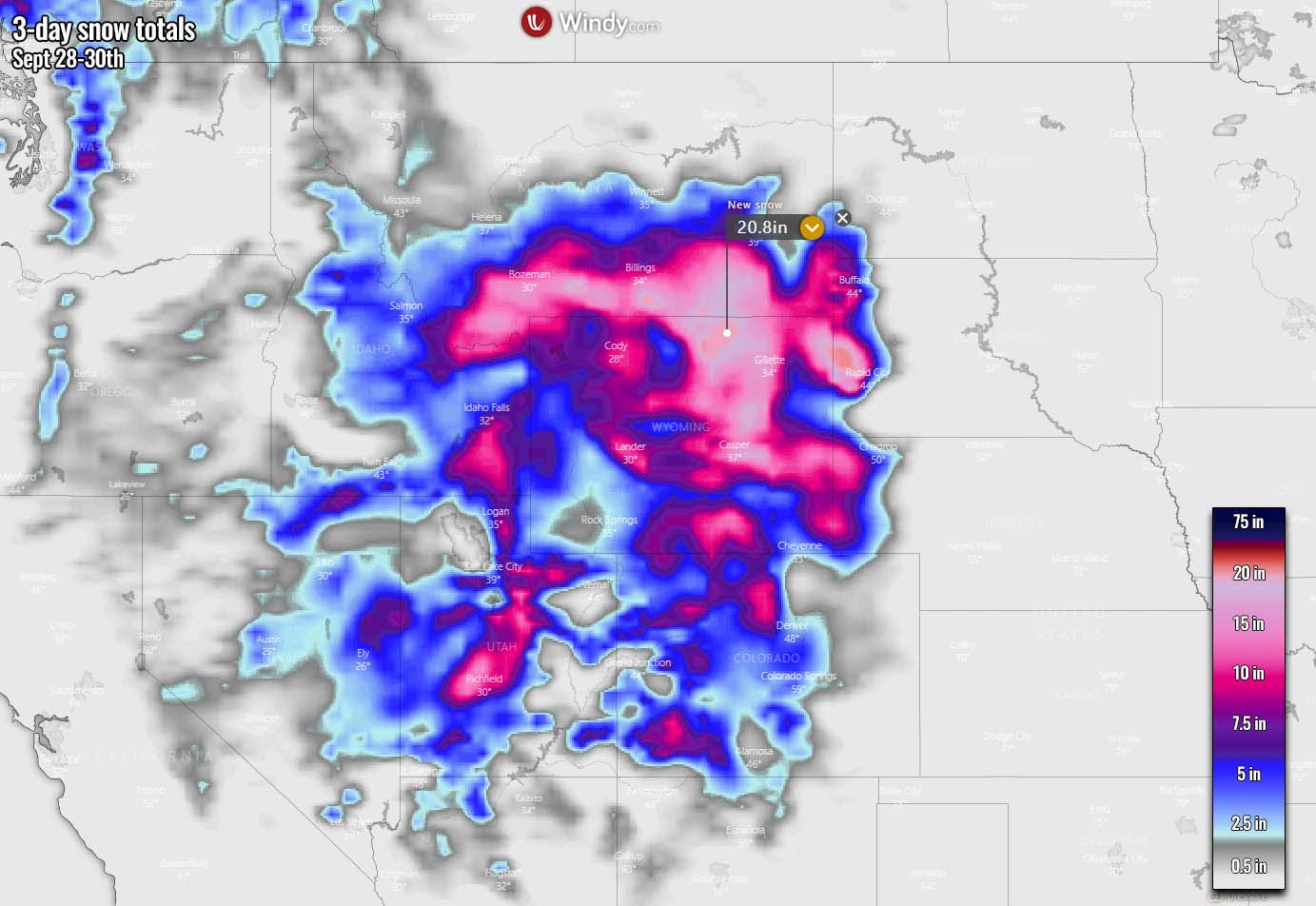 The worst winter conditions are expected across Wyoming, with some of the largest snowfall accumulations forecast from near Wyoming’s Interstate I-25 and U.S. Highways 16 and 26. Some areas could see up to 1-2 feet of snow or possibly even more.

A combination of both convective and orographic snowfall is forecast, high moisture and increasing winds will push the snow accumulations up quite fast during the day on Tuesday.

After severe thunderstorms over the weekend and on Monday, Tuesday will be another day of potentially significant convective storms over the Great Plains, as part of the multi-day severe weather outbreak in the central U.S. Although the usual severe weather period is spring, the autumn months and fall seasons are often prone to see the severe weather ramping up.

A powerful upper-level pattern that is establishing with a deep low this week also sets a stage with a strengthening jet stream and strong interaction of cold air masses from the north with much warmer and moist air mass from the Gulf of Mexico. Actually quite typical during October and November months. 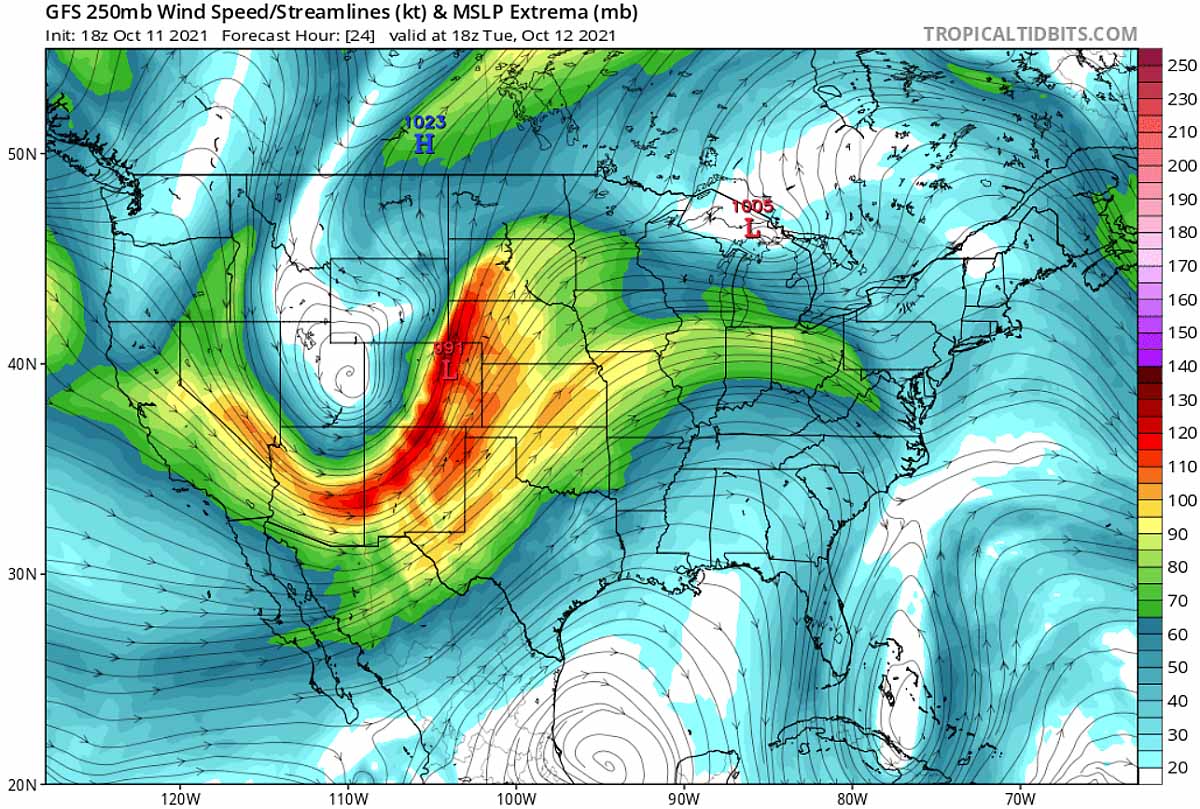 Under the strengthening upper-level jet stream, severe storms are forecast to redevelop across the central parts of the country and is likely to be widespread across several states, including Nebraska, Kansas, and Oklahoma. Large hail, damaging winds, and tornado threats will significantly increase on Tuesday.

The greatest risk of damaging severe weather and tornadoes appears to be centered from west-central Oklahoma into much of Kansas this time. So the same areas as were badly hit on Sunday could be in severe threat again on Tuesday. 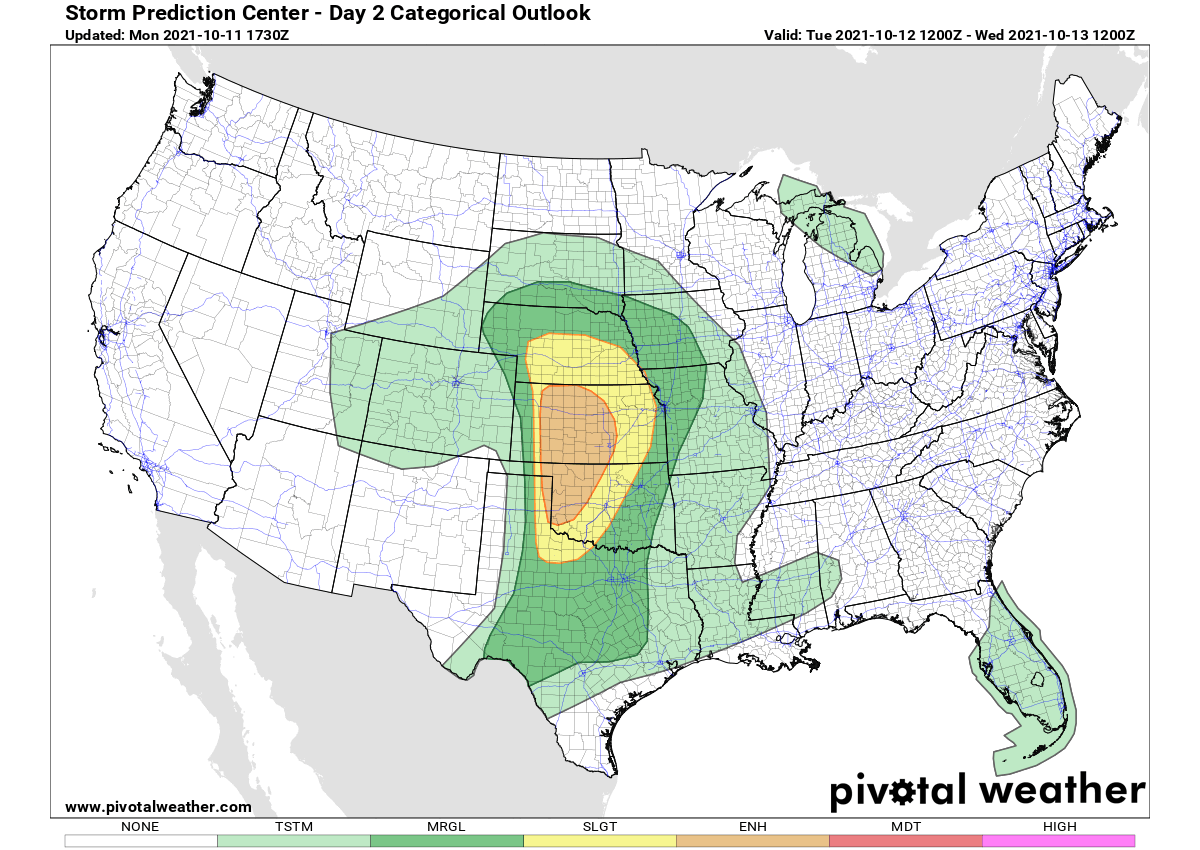 According to the severe weather outlook by the Storm Prediction Center (SPC) above, areas across western Kansas, the eastern part of the Texas Panhandle, and western Oklahoma will be at the greatest risk for tornadoes, large hail, and severe winds.

This potent winter storm to the north will bring wild convective weather to the south, especially through the evening hours Tuesday into the night and early Wednesday. Areas from eastern Montana across Wyoming to northern Colorado will see heavy snow Tuesday night, while severe thunderstorms will develop from Nebraska to Kansas and Oklahoma at the same time. 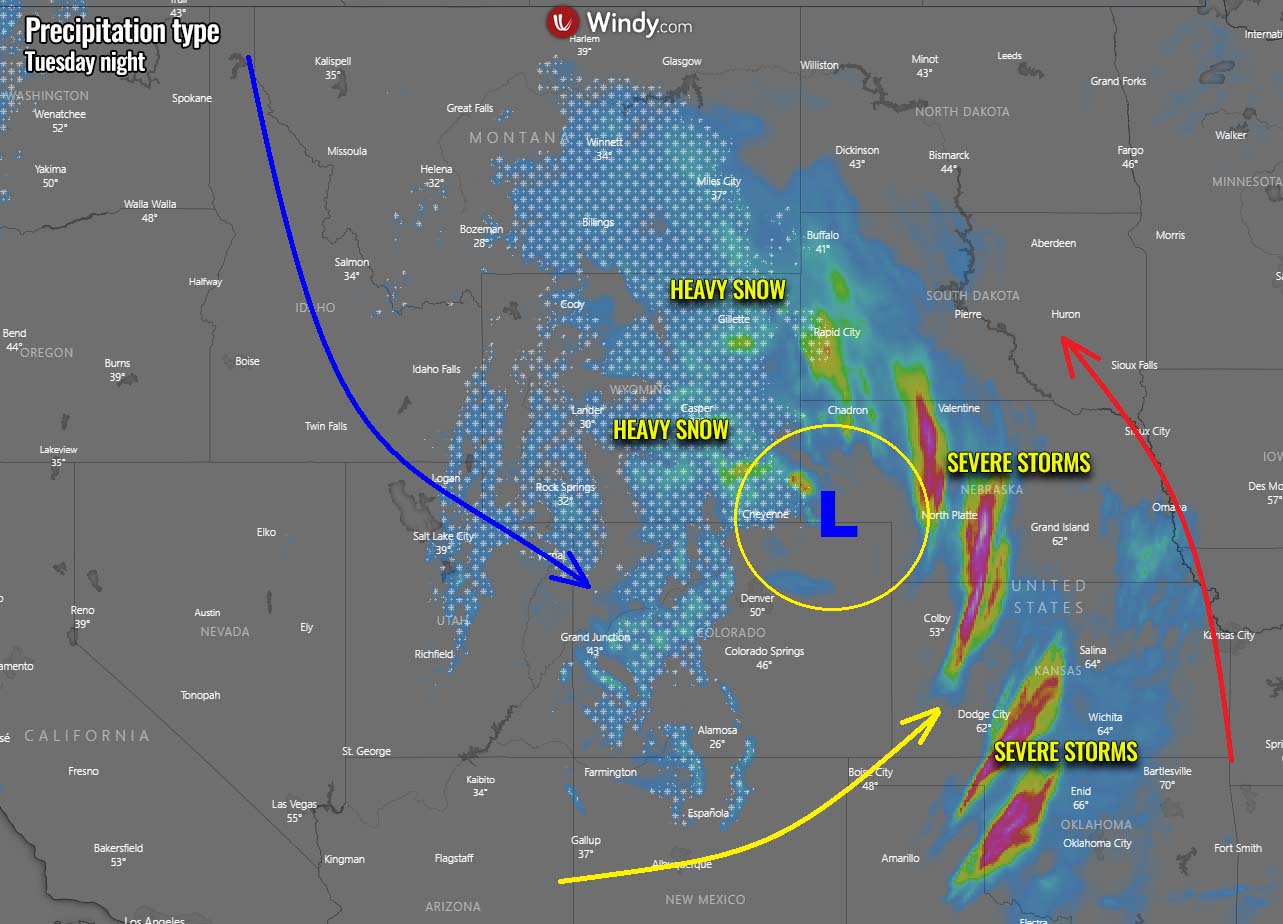 Likely a well-organized squall line of severe thunderstorms is expected to shift eastward across the central Great Plains through the overnight period with an accompanying threat for winds, and a couple of tornadoes. There is also an increased potential for significant wind gusts greater than 65 knots.

SEVERE WINDS ARE FORECAST WITH A RAPIDLY DEEPENING LOW, SNOW BLIZZARD FOR THE ROCKIES

With the progress of the frontal system across the High Plains, winds will also increase towards the surface low. The winter storm across the Rockies will bring strong blizzard conditions that will worsen with time on Tuesday. Heavy snow and increasing winds advance east across Wyoming late Tuesday. 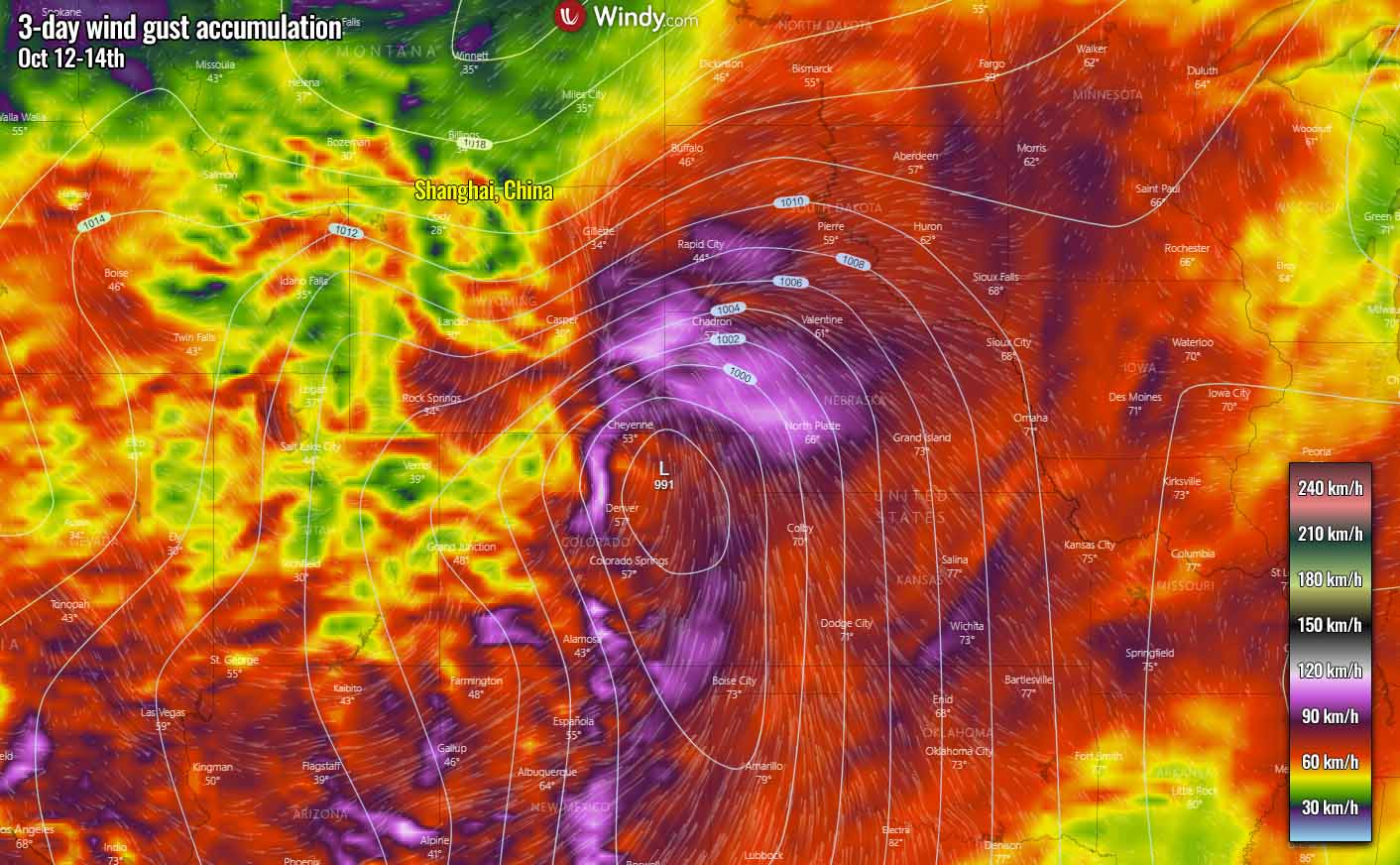 Intense, locally severe, and gusty winds should also result in blowing dust across the High Plains, especially across western Nebraska where tightening surface pressure is associated with the deepening low results. Wind gusts with hurricane-force speeds up to 80-90 mph are possible across parts of Wyoming.

A severe blizzard should continue across the Rockies through Tuesday, gradually diminishing through Tuesday night into Wednesday morning. As combined with heavy and excessive snowfall, snowdrifts are likely with significant travel disruptions and delays expected. 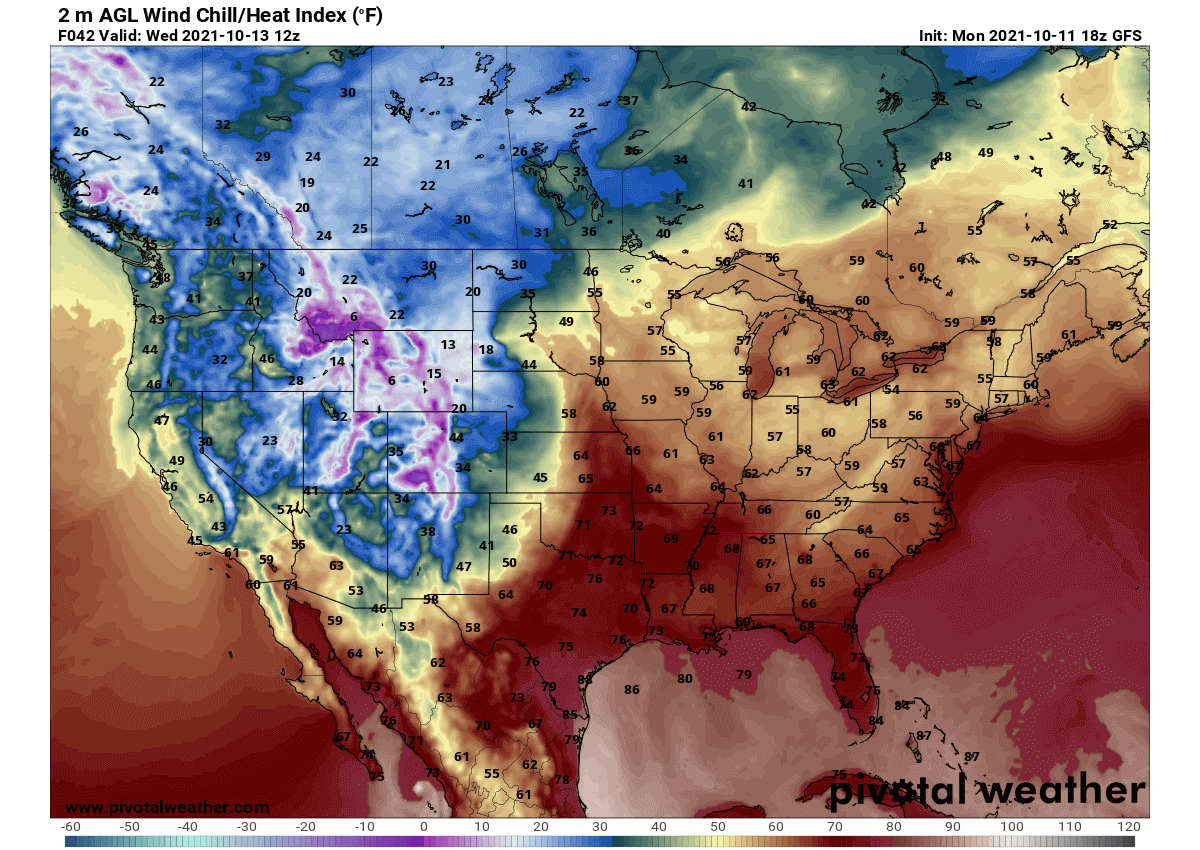 The wintery feel will also be pretty chilly temperatures arriving in the storm’s wake. And surely a good air temperature for the ski resorts to run their snow machines, getting reading for the soon-opening season.