Hurricane Larry, the longest-lived tropical cyclone of the Atlantic Hurricane Season 2021, has made its final landfall in Newfoundland early Saturday morning. Larry is now an extratropical storm, merging with the mid-latitude cyclone in the Labrador Sea. Both will generate a massive winter storm that is forecast to deliver a tremendous amount of snow across southeastern Greenland in the coming days.

As hurricanes maintain their tropical (warm core) structure so far north are not so common, it makes Larry quite an interesting case. The landfall in Newfoundland was of a Category 1 strength.

Soon after the landfall, Larry has moved quickly north-northeastward at about 42 knots and is now well northeast of Newfoundland in the Labrador Sea, on its way towards Greenland. 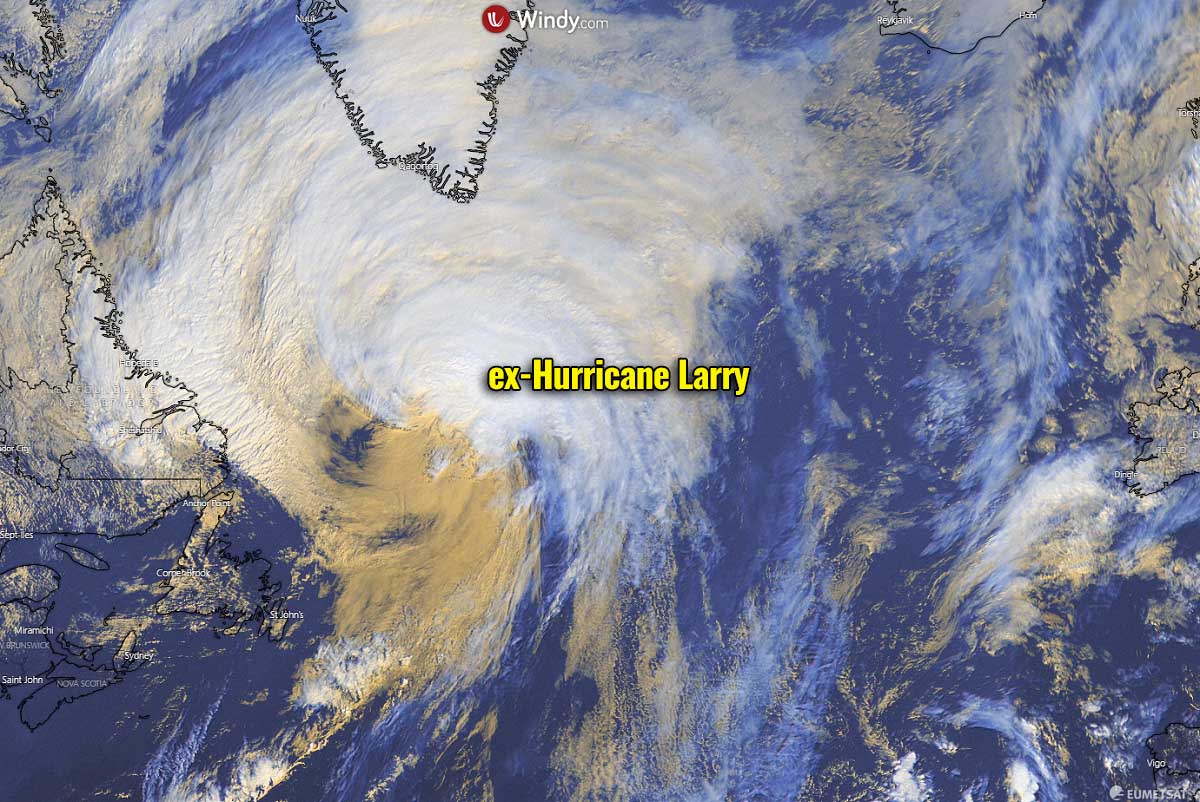 Although the hurricane still has some central convection, the low-and mid-level centers are separating, so the remaining convection is decreasing and should finish soon. The initial maximum winds are now around 65 knots and Larry has quickly transitioned into a powerful extratropical cyclone this Saturday evening.

This Saturday, it has continued its speedy north-northeastward course, dissipating its tropical characteristics as it merged with a developing mid-latitude low over the Labrador Sea. 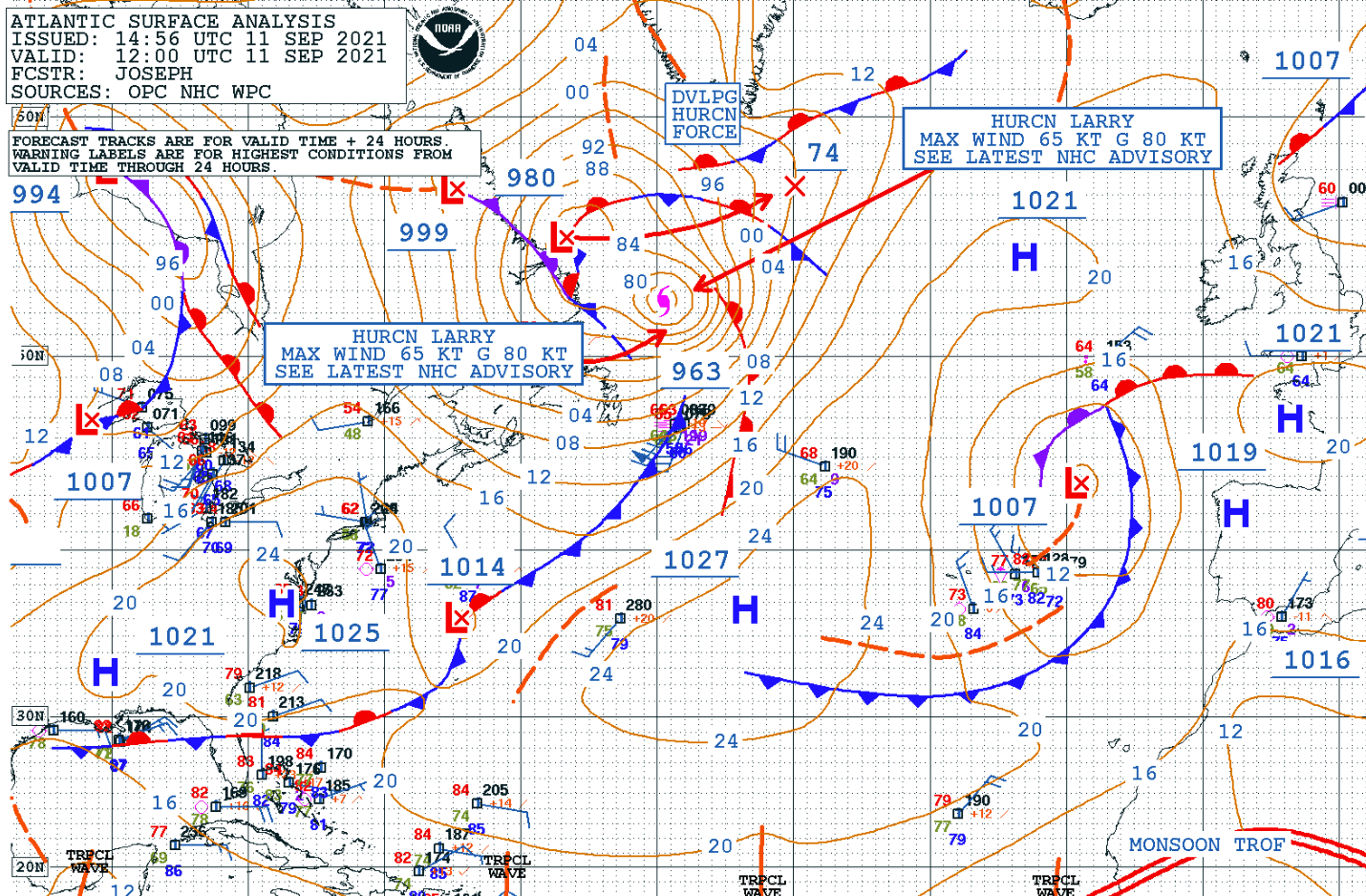 The merging systems will lead to a massive winter storm over Greenland, producing a pretty rare event when a hurricane tracks far north in the Atlantic and pushes high tropical moisture towards the Arctic region. The result will be a lot of snow that is forecast to accumulate with this winter storm in the far North Atlantic region through Monday.

The overall system will remain pretty large and quite intense over the weekend while tracking northeast just north of Iceland with its center and gradually dissipate in the Greenland Sea early next week.

The extratropical cyclone is one of the numerous types of low-pressure areas, that have the term “cyclone” The extratropical means that this type of cyclone generally occurs outside the tropical region, generally in the mid-latitudes of Earth between 30° and 60° latitude (North or South). 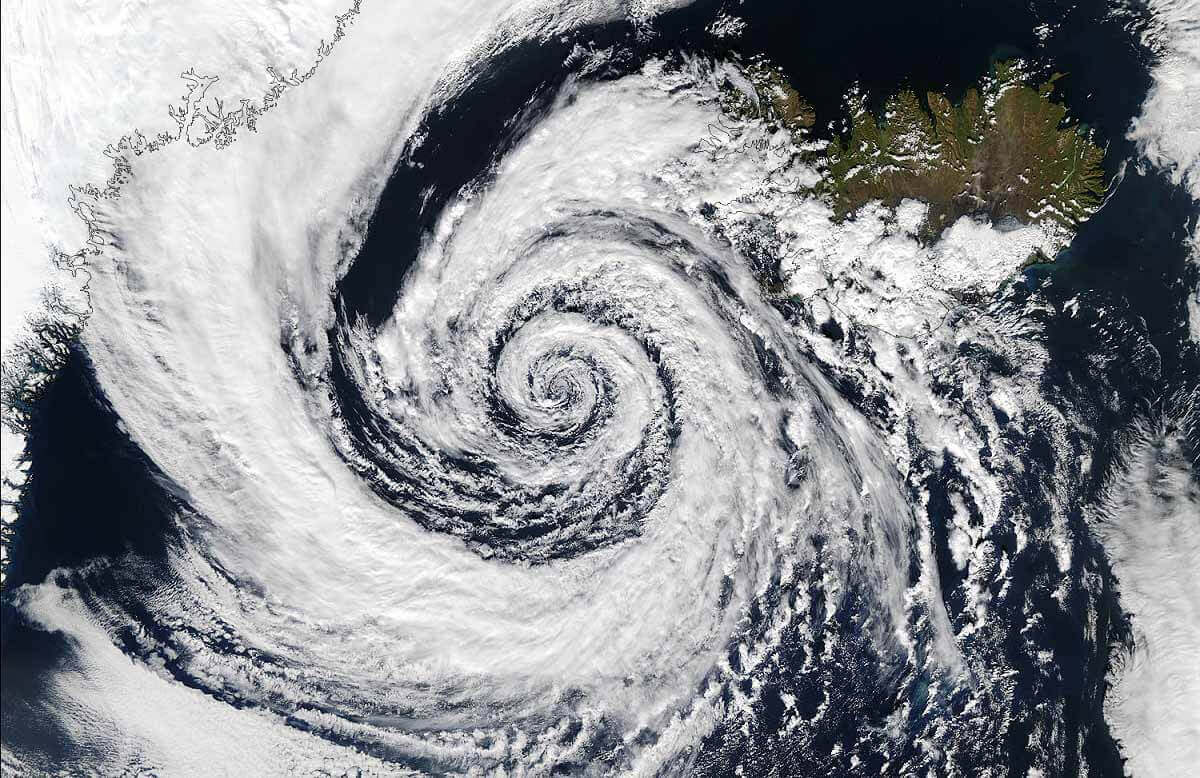 Over the North Atlantic, a typical example of such cyclonic systems is the so-called Icelandic Low, a surface low-pressure system that can be found between Iceland and southern Greenland (image above). The featured extratropical cyclone we are discussing here is exactly it. The impressive satellite image of the Icelandic low above happened on Sept 4th, 2003.

These systems are termed mid-latitude cyclones if they form within those latitudes, or post-tropical (extratropical) cyclones if a tropical cyclone (or a hurricane) has intruded into the mid-latitudes. This is exactly the case hurricane Larry made today.

ATLANTIC HURRICANE SEASON IS AT ITS STATISTICAL PEAK, RUNNING AT 160% OF AN AVERAGE

September 10th is the official statistical peak of the Atlantic Hurricane Season. So far, there have been 13 named storms, that’s about the average amount of tropical cyclones that occur by the end of a typical hurricane season. The last one was Tropical Storm Mindy, a short-lived system forming in the Gulf of Mexico earlier this week.

So the 2021 hurricane season is actually well ahead of the schedule. Through Sept 10th, there are normally about 8 named storms, so 2021 runs at 165% of the average.

Basically, all the parameters we are usually looking at during the Atlantic hurricane season are well above average, including the number of hurricanes, major hurricanes, etc. Image is provided by dr. Philip Klotzbach. 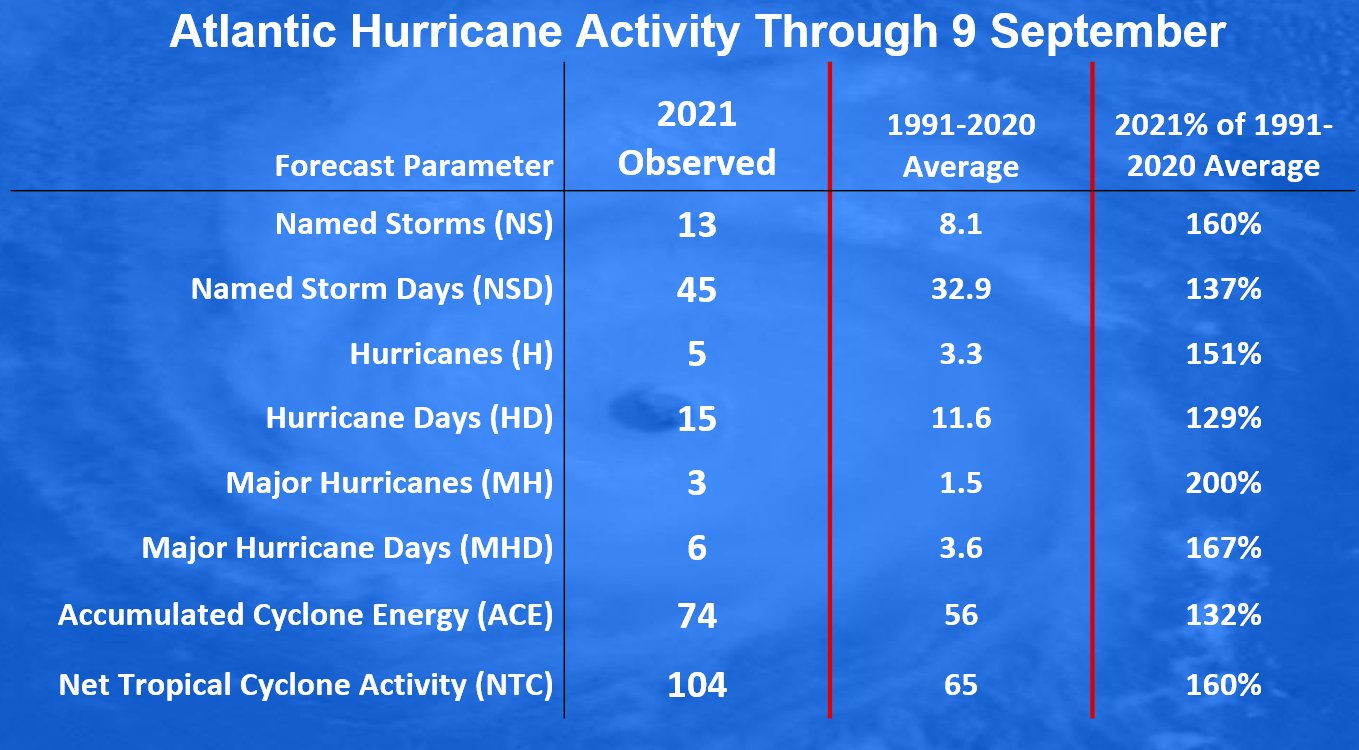 Hurricane Larry was the 12th named storm and also the longest-lived Atlantic hurricane this season, generated the highest ACE among all 13 storms in 2021. The ACE index – Accumulated Cyclone Energy is used to express the energy that was used during the tropical cyclone’s lifetime. We are monitoring this for any tropical region around the world.

This year, 21 tropical cyclone names have been designated by the World Meteorological Organization (WMO), so we have only 8 storm names left until the end of the season which officially ends on November 30th. The second half of the season (Sept-Oct-Nov) is normally the busiest period, with more systems and often also stronger than during the first three months. 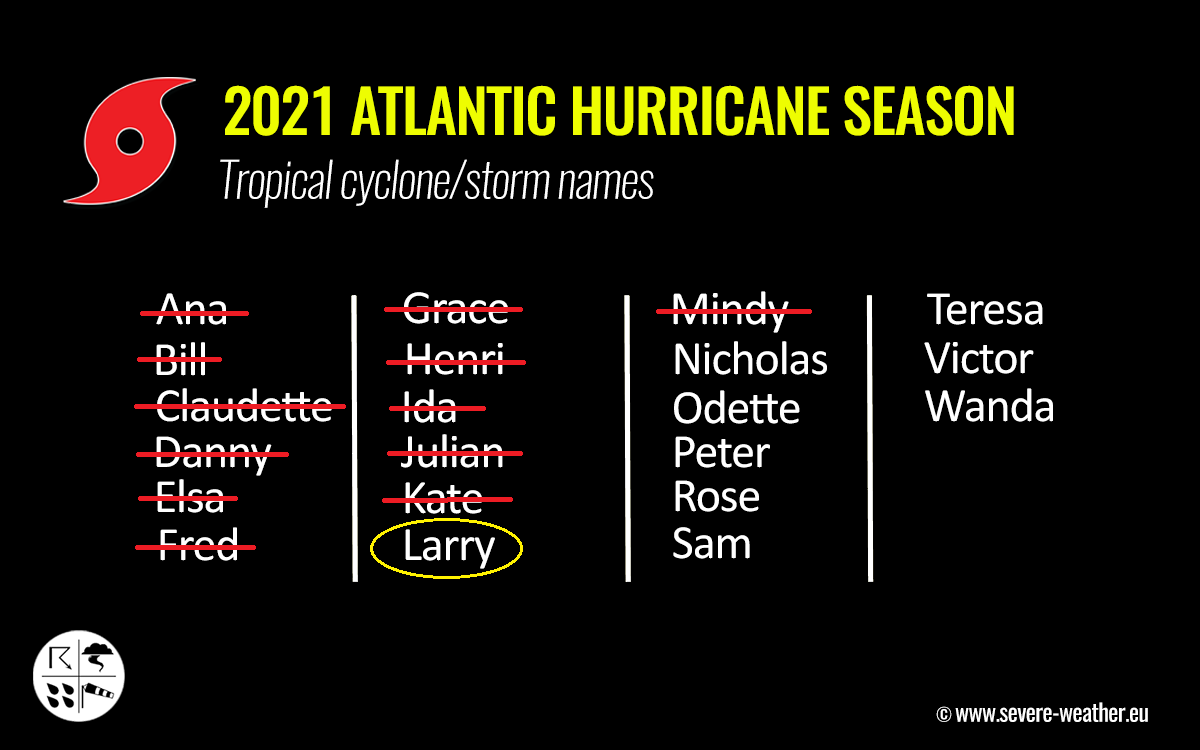 While Larry is now an extratropical storm, it keeps adding some ACE as it tracks across the North Atlantic this weekend. In total, 74 ACE has accumulated through Sept 9th, about 135% of the long-term average (1991-2020). 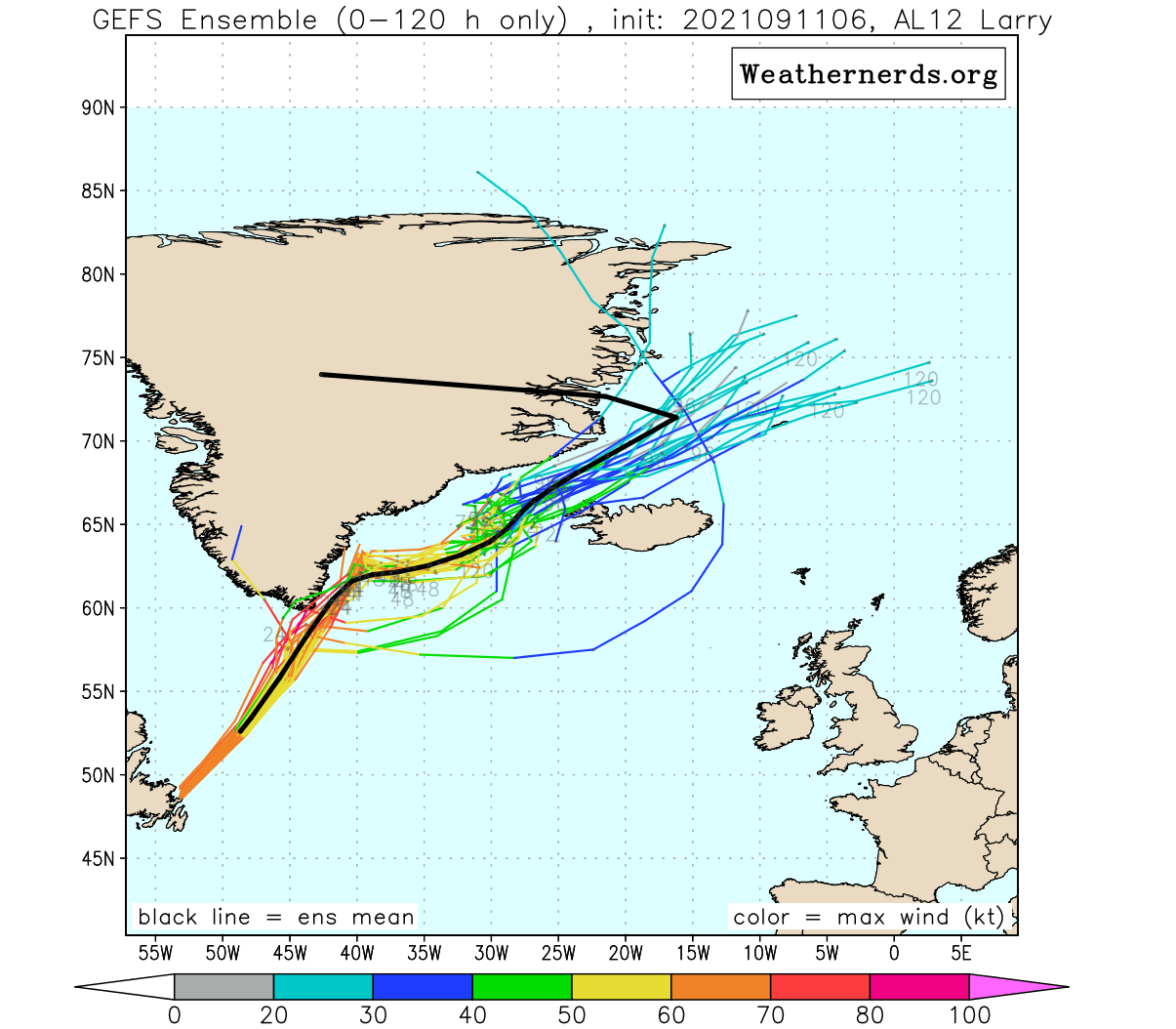 Once the storm merges with the mid-latitude cyclone, they both move across the Labrador Sea and approach the southern tip of Greenland by Sunday morning. Then, the large-scale system will continue tracking northeast towards Iceland, but its track will likely bring it in between the two lands.

While the system will be accelerating along the southern Greenland towards the Denmark Strait into the Greenland Sea over the next few days, a strong moisture plume will be advected ahead of the low.

The high moisture and large system will dump a huge amount of snow across southern Greenland starting Saturday night through Monday as the center of the extratropical storm tracks along the southeastern coast. 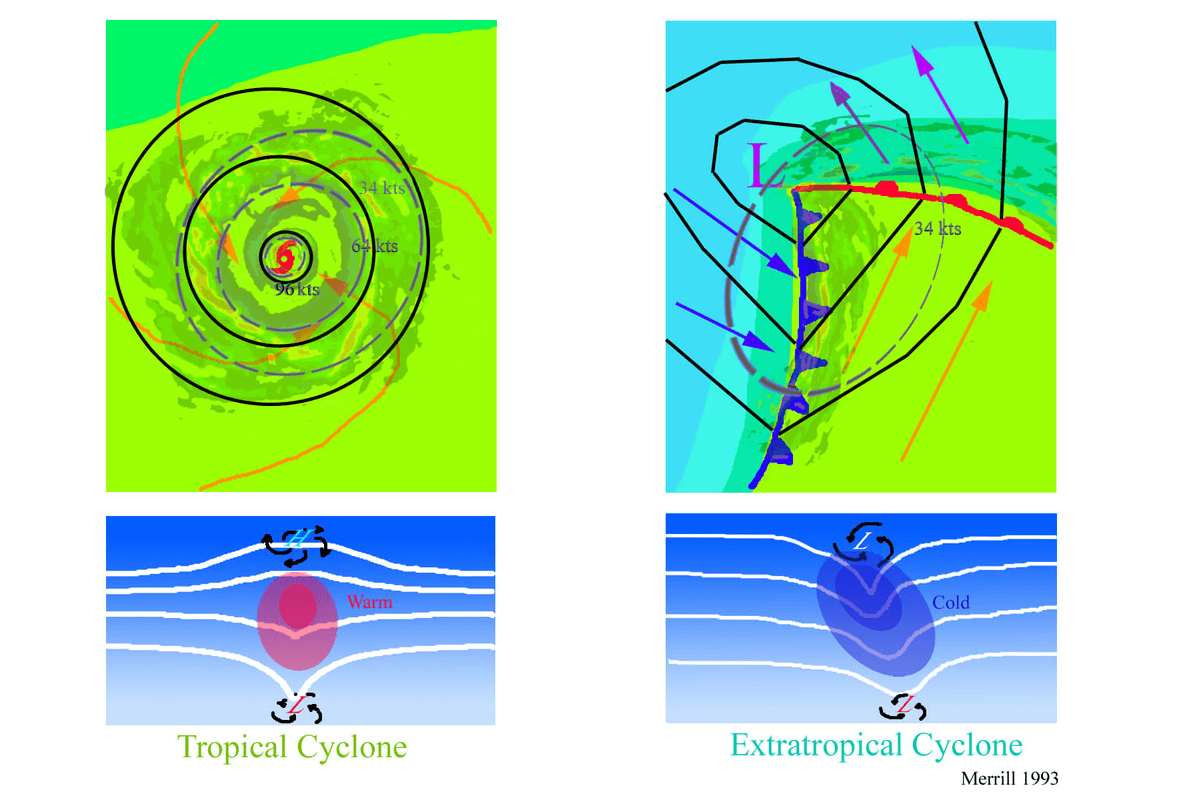 These cold-core systems have cold and warm fronts, the features we are mostly more familiar with. While the warm core systems (those can be hurricanes, typhoons, or even medicanes) produce weather features such as eyes, eyewalls, and spiral outer bands.

It is actually quite a rare event that a hurricane survives so far north in the Atlantic, meaning that it keeps producing some convective storms and drags a very high amount of moisture that will normally interact with the lower temperatures, therefore have the potential to produce deep snow. 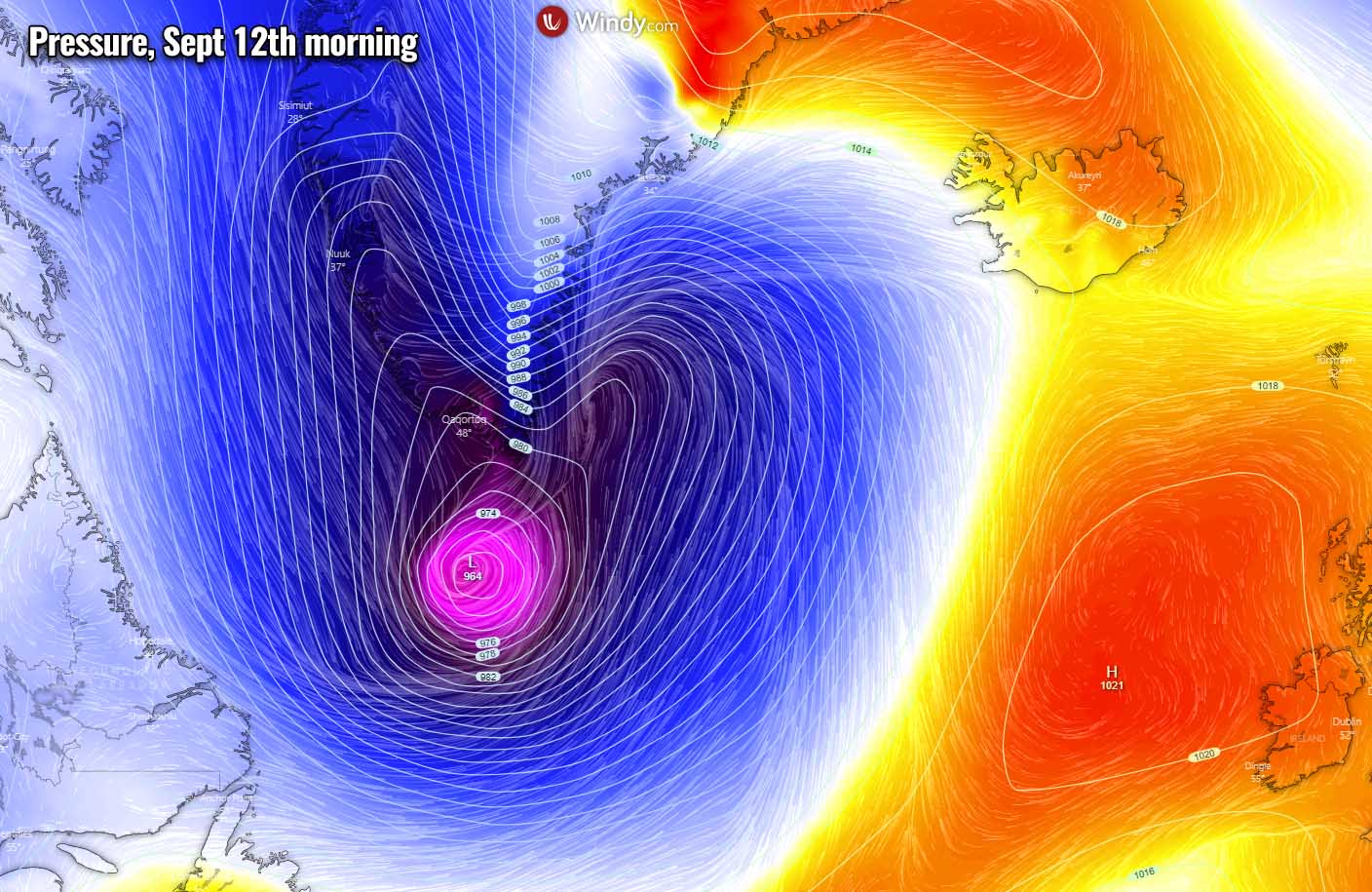 Through Saturday night (image above), Larry interacts with the developing mid-latitude storm emerging over the Labrador Sea and together they deepened further. The strengthening low will help to pull in a huge amount of moisture from the warmer Atlantic Ocean towards Greenland.

This will lead to a significant winter storm that is forecast to impact the southern parts of the country. 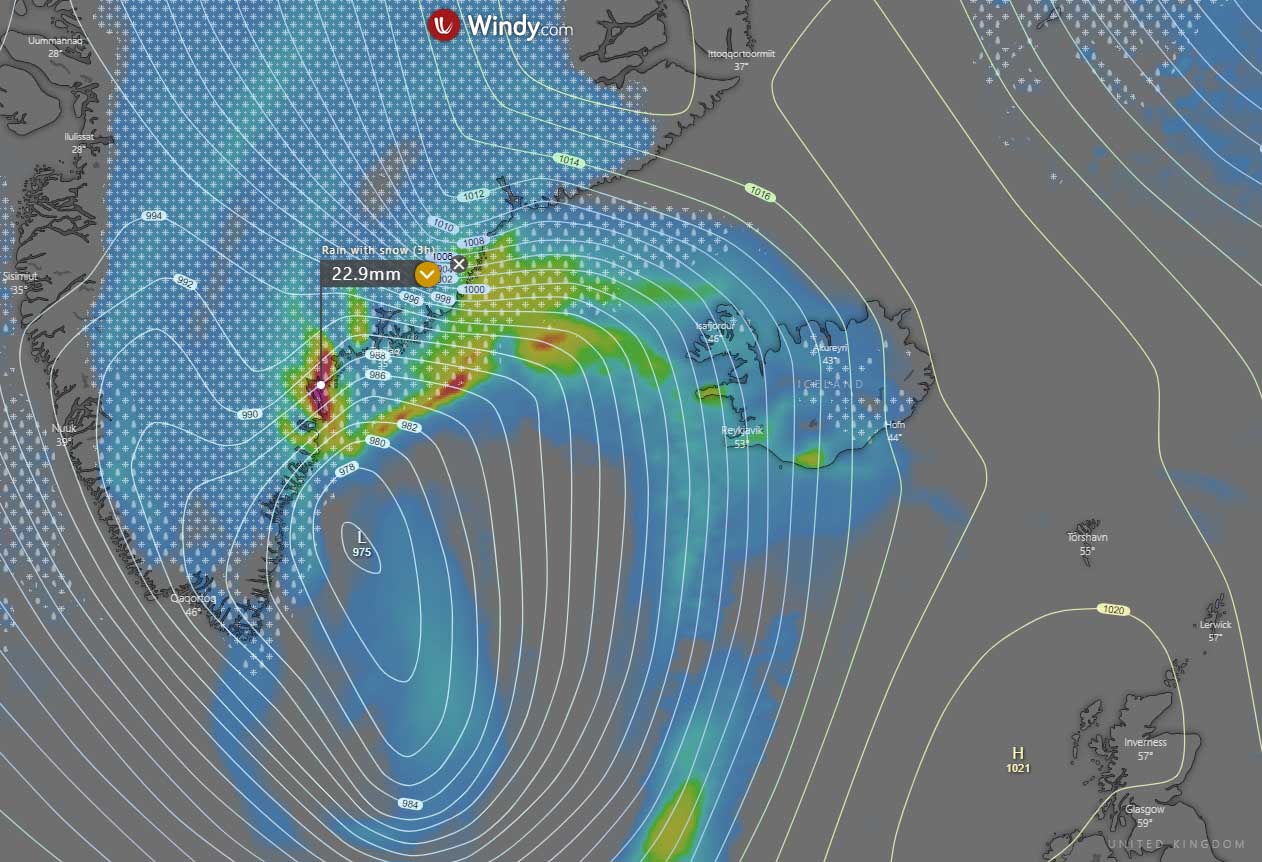 The general model consensus is in good agreement that widespread snowfall totals of 50-100 cm, even more in some areas. Especially as strong orographic effects of the very moist air mass will develop extreme snowfall on the southeastern slopes of the mountainous terrain there.

The higher the mountains are, more snow will accumulate and close to 150 cm over the next 72 hours is likely. 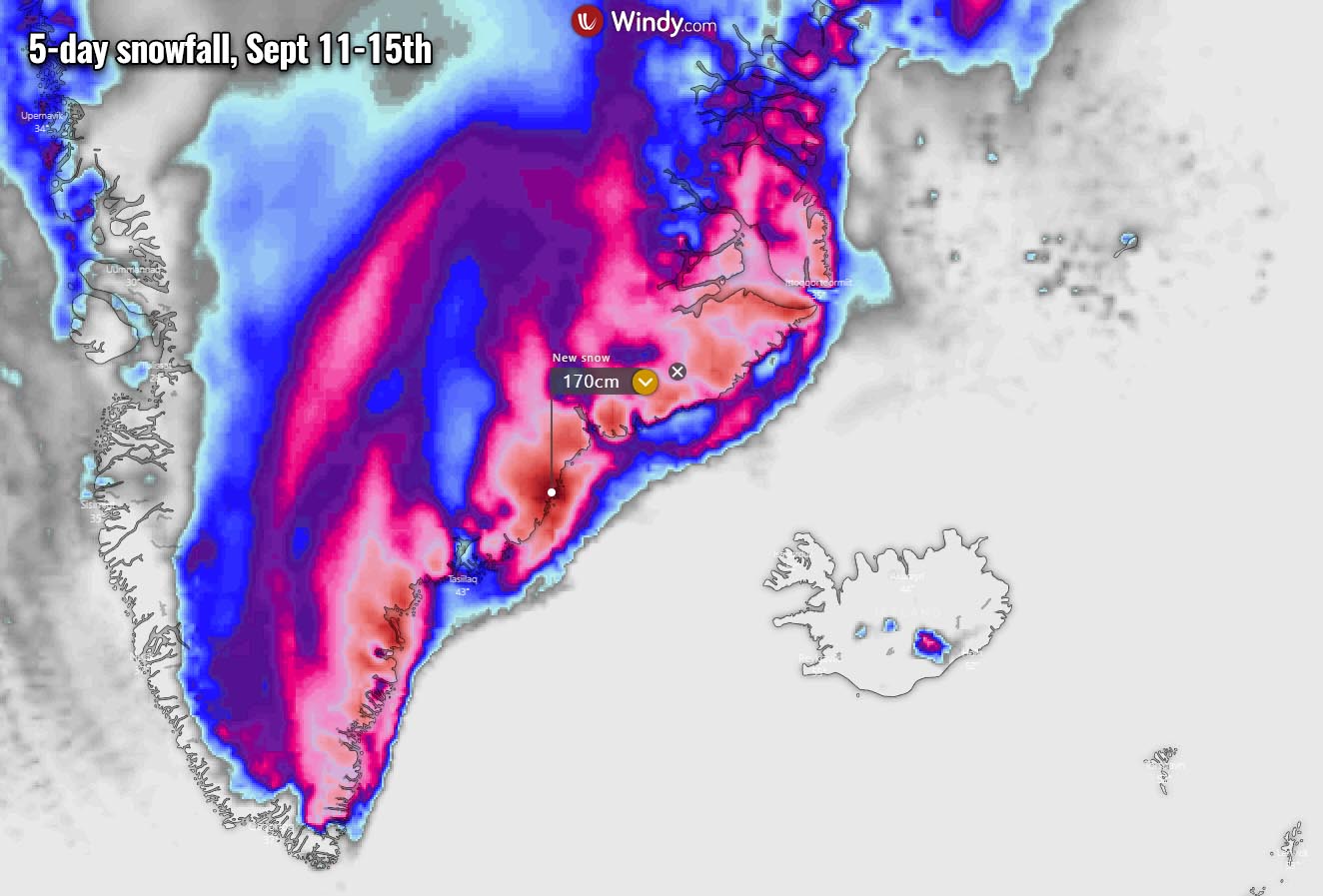 The winter storm across southeastern Greenland will gradually be advancing northeast and spread across southeastern and eastern parts of the country through Sunday night into Monday. Also, Iceland should see some effects of the extratropical storm, but the colder side will remain over Greenland so snowfall in Iceland is not expected (only in the higher tops).

The pressure gradient around the deep extratropical storm tracking along southeastern Greenland against the much higher pressure over the land further north will also develop very intense downslope winds in the system’s wake. Those wind gusts could be up to around 180 km/h in some areas, possibly more when channeling effects occur in the fjords of southern Greenland. 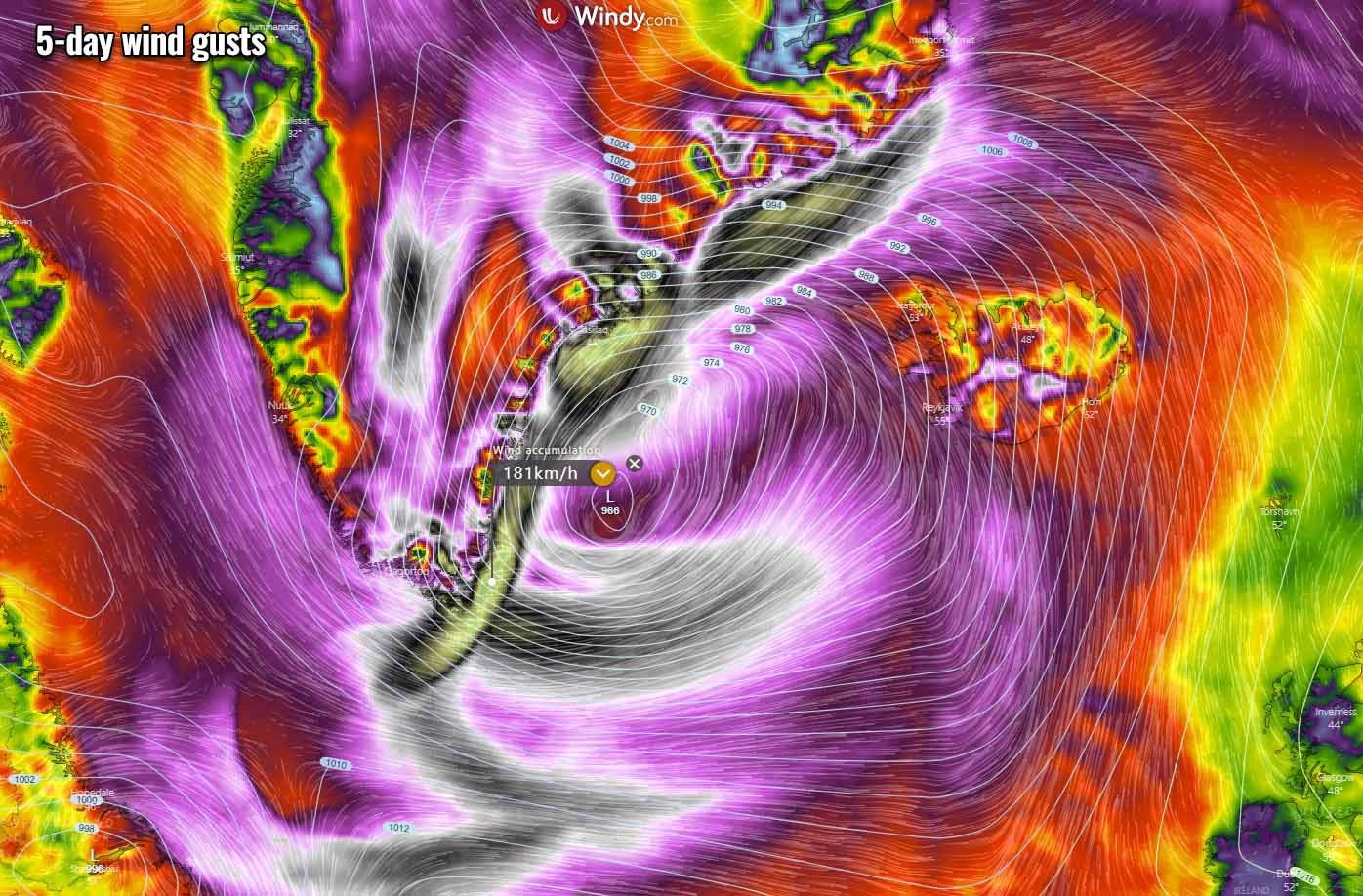 The winter storm will be accompanied by an intense snow blizzard along southern and southeastern Greenland, so conditions will be pretty wild over the next 48-72 hours. However, the population in this part of Greenland is pretty sparse, so not many will be under the dangerous threat there. Only the southeastern parts of the country where some small towns are located.

***Images in this article were produced by Windy, and Weathernerds.