The Atlantic Hurricane Season 2021 is now in its second half, and about to reach the seasonal’s peak around Sept 10th. The ongoing hurricane Larry is the 3rd major hurricane this year, and also the 12th named storm, producing huge accumulated energy and expected to remain a powerful storm until the next weekend. Larry will pass near Bermuda on Thursday and develop a life-threatening surf and rip currents along the East Coast of the United States.

This Monday, hurricane Larry has winds up to 120 mph, a solid Category 3 major strength, and continues moving northwest over the open Atlantic. It will not be any direct threat to land areas in the coming days but will pass near Bermuda on Thursday. 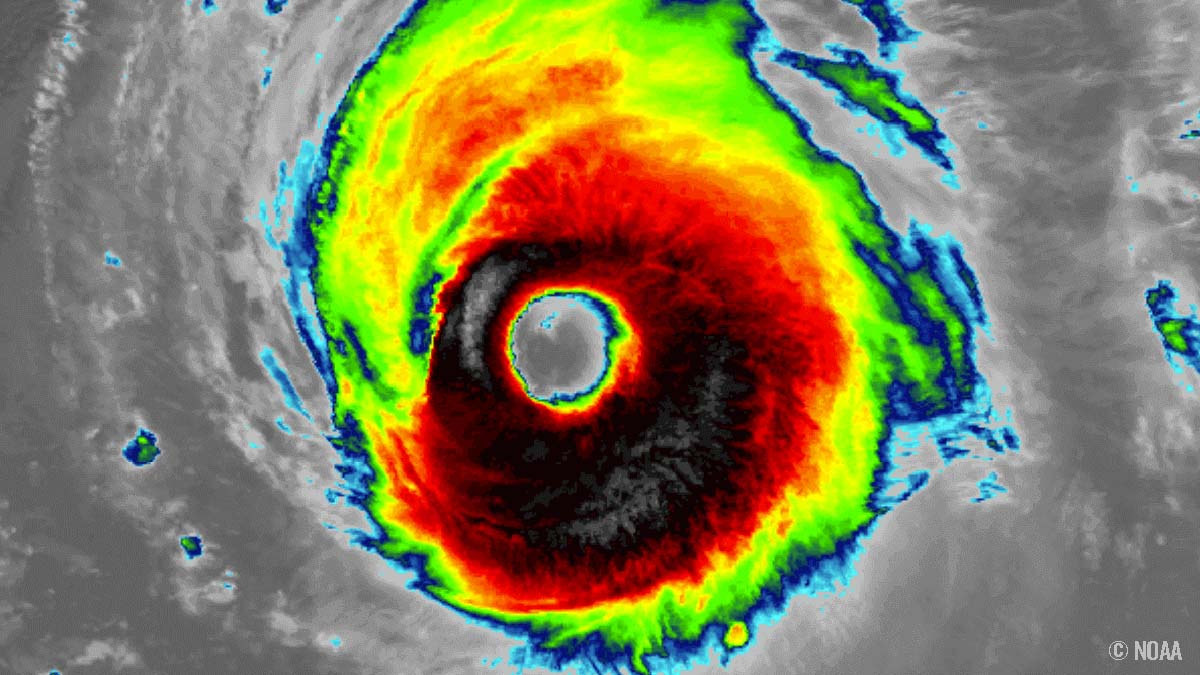 Larry has a large eye and should remain of a Category 3 storm, even a temporal upgrade into a Category 4 is possible before it comes closer to Bermuda after Wednesday. Then, it might still be a major hurricane while passing north to the east of Bermuda on Thursday during the day, though the exact track is still uncertain how close the center with the surrounding intense wind in the eyewall will be to Bermuda.

Although hurricane Larry is not expected to have any direct impact on the United States, it could still cause high swell, and dangerous rip currents along the U.S. East Coast by late this week. According to the National Hurricane Center, significant swells will likely reach the eastern United States coastline after Labor Day. Those could cause life-threatening surf and rip current conditions.

The Atlantic hurricane season this year took off pretty fast through May and June, followed by a lull activity throughout the month of July. Then, a major MJO wave has resulted in a significant increase during August and pushed the seasonal statistics back into the above-average activity. As per statistics, the Atlantic Hurricane season has its peak around September 10th and lasts through November 30th.

Larry (above) is the 12th named tropical cyclone of the 2021 season, forming on September 1st. And also the 5th hurricane this year. Normally, there are 14.4 named storms and 7.2 hurricanes each Atlantic hurricane season, so 2021 is well ahead of the average statistics.

This was actually not surprising at all as the Atlantic sea waters have significantly warmed up this summer. Those are extremely warm over the tropical Atlantic, including the Caribbean region and the Gulf of Mexico.

The sea surface temperatures (SSTs) of the tropical Atlantic are ranging from 28 to nearly 30 °C, even up to 31 °C in the Gulf of Mexico. The east-central Atlantic, where most of the tropical cyclones form, has a water temperature of around 28 °C. Hurricane Larry did the same and took an advantage of these warm waters, intensified into the 3rd major hurricane of 2021. 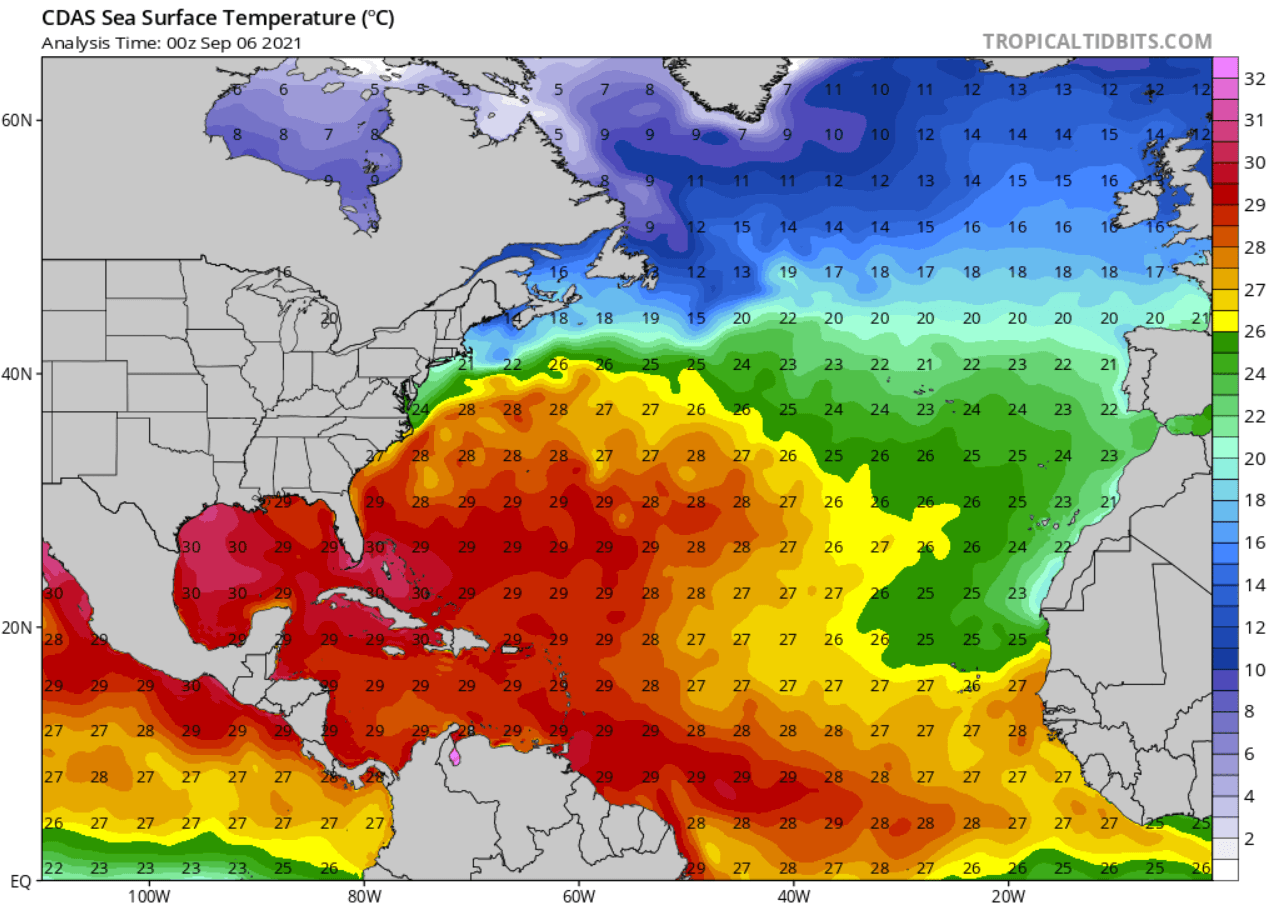 The highest the sea temperatures, the higher is the concerning potential for the upcoming tropical storms that will form around the peak and until the end of the Atlantic hurricane season. As normally, the explosive development of tropical storms is often observed when they encounter very warm and moist fuel at the sea surface. If combined with low wind shear, rapid intensification is basically warranted.

The sea surface temperatures are anomalously warm also across a so-called MDR region (Main Development Region), the region in the tropical Atlantic extending between the west coast of Africa and the Caribbean Sea where most of the tropical cyclones form. These high sea surface temperature anomalies hint at the strongly enhanced potential for significant tropical cyclone development.

The typical example this year was hurricane Elsa and Ida, as they literally exploded in the Gulf of Mexico and became dangerous hurricanes before the landfall. And we could already see how hurricane Larry is strengthening these days, and further rapid intensification will follow.

The Atlantic hurricane season 2021 is together with a much above-average number of storms also generating a lot of the Accumulated Cyclone Energy (ACE). By Sept 1st, there was 45.2 of ACE accumulated. The ACE index is an integrated metric accounting for the frequency, intensity, and duration of storms in the tropical region.

The ACE index is used to express the energy that was used during the tropical cyclone’s lifetime, and we are monitoring this for any tropical region around the world. This is how we can easily compare every tropical storm or hurricane with the other, no matter the Pacific or Atlantic basin they occur. The ACE index is a short abbreviation for the Accumulated Cyclone Energy.

There are 4 categories to classify the Atlantic Hurricane Season:

The satellite analysis is also indicating that Larry is in a very healthy environment that supports maintaining strength and is likely to remain in a major hurricane for at least two more days.

The Advanced Dvorak Technique (ADT) analysis indicates that there are hurricane-force 64-knot winds spread across 40-45 miles of radii around the large eye. The tropical storm winds of 50 knots are extending up to 85 miles around the center. The right chart also hints at how Larry has been steady with major strength over the weekend.

This Monday, the Dvorak analysis is estimating that the central pressure is held at around 952 mbar, with the maximum sustained winds of around 105-110 knots. Hurricane Larry remains a powerful storm.

Larry continues moving northwestward, with about 10 knots. The track forecast for Larry remains of high confidence and the hurricane is expected to continue moving northwestward through midweek along the western periphery of a mid-level subtropical ridge over the central Atlantic.

Then around Thursday, Larry is forecast to turn northward and pass to the east of Bermuda. It is expected to move off the coast of the northeastern United States.

Hurricane Larry is forecast to make its closest approach to the Bermuda island on Thursday. As Larry has a large size, some impacts could be felt even if the center of the hurricane remains well east of the island on that day.

Hurricane Larry is expected to remain in very good oceanic and environmental conditions at least until it is past Bermuda or even up to the next week. This environment is expected to be conducive for further maintaining its strength or even intensify at times, depending on the EWRC activity.

There will be large swells generated by Larry spread across portions of the Greater Antilles, the Bahamas, and Bermuda through Tuesday. Significant swells should also reach the U.S. East Coast and Atlantic Canada by midweek and continue affecting these shores through the end of the week. These swells will likely cause life-threatening surf and rip current.

When Larry’s approach to Bermuda around Thursday occurs, the hurricane will remain a large and powerful hurricane, bringing a risk of strong winds, heavy rainfall, and coastal flooding to the island. While it is too soon to determine the magnitude of these hazards and potential impacts on Bermuda, close monitoring of the developing conditions has to be considered in the next few days.

Only a gradual weakening is shown by the weather models as the large hurricane Larry will remain in a reasonably favorable environment of weak to moderate shear and warm sea surface temperatures until Saturday. Larry will likely be in the process of extratropical transition by that time but remain a powerful tropical cyclone.

There is actually a fairly good agreement by both global weather models, ECMWF and the GFS model. Both have Larry passing near Newfoundland (Canada) over the weekend. Then, the system would track further northeast towards Greenland and Iceland as per the ECMWF solution.

While the GFS solution is open for a few options. It may take the ECMWF best track or even turn more east towards western Europe or southeast towards the Azores.

Nevertheless, further conditions and evolution need to be monitored if Larry transforms into a potentially strong extratropical storm once it comes closer to Europe.

***Images used in this article were provided by Windy, TropicalTidbits, and Weathernerds.