A pronounced cold front has been surging south across central Europe, the Alps, and the northern Balkan peninsula this Friday, leading to scattered severe storms forming over northeast Italy. Those have organized into a small complex of storms, including embedded supercells and a rather strong tail-end supercell storm.

Although it might be early May and getting warmer, the last couple of weeks were rather cool and the month of April has been one of the coldest in the last 20 years for the southern side of the Alps. Nevertheless, surface heating ahead of the southward surging cold front has lead to marginal instability, coupled with moderate winds and wind shear.

Once the front entered this warmer airmass over the Italian plains, convective storms formed and quickly start to organize. Isolated to scattered supercell storms have been reported from the Friuli and eastern Veneto region first, then storms merged into a larger complex with embedded supercell storms. 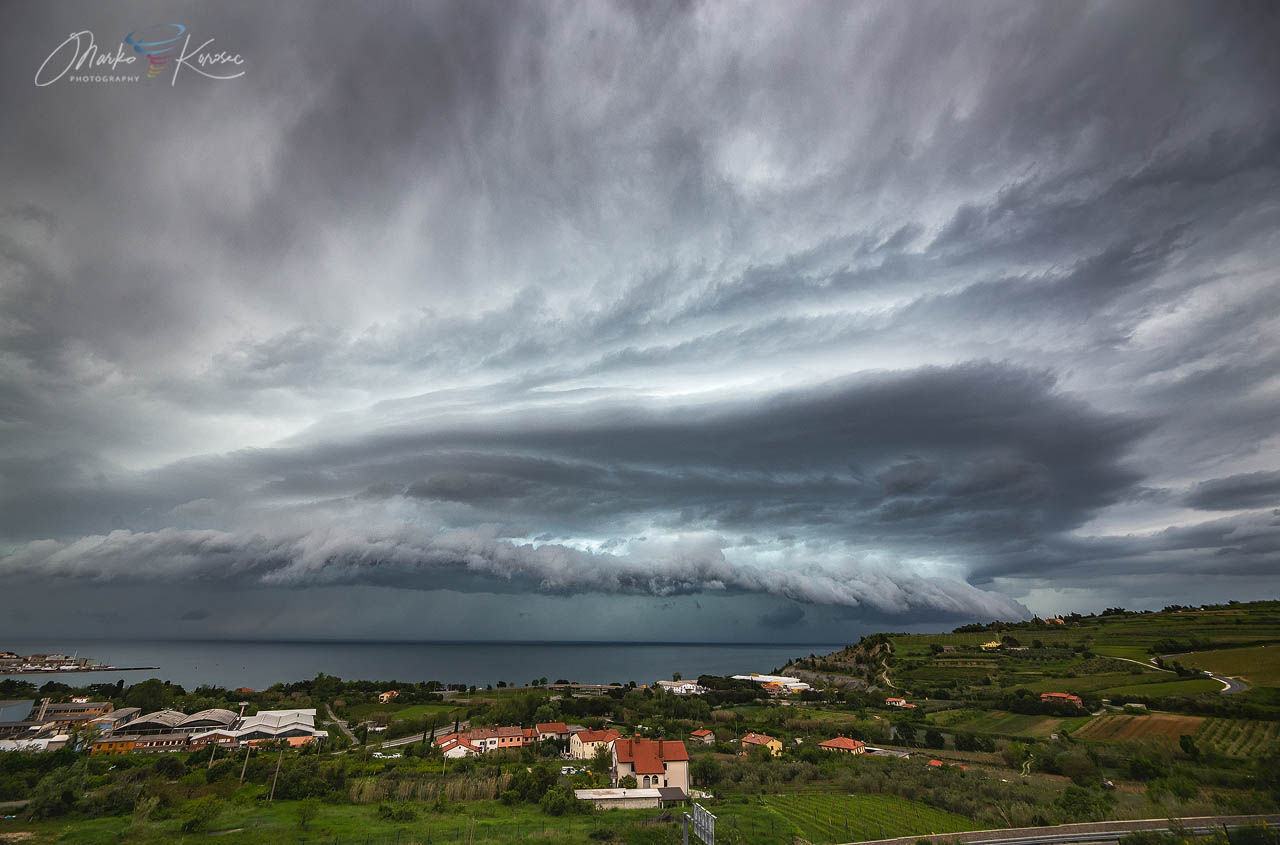 The tail-end supercell storm made the strongest effect across north Istra, Croatia, and the Slovenian Coast, as well as around the city of Trieste. Storm reports along the North Adriatic coast reveal a healthy structure of the storm, including an impressive shelf cloud rolling across the Gulf of Trieste.

The video animation below reveals the approaching supercell storm embedded in the complex of the storms moving across the North Adriatic. Notice the impressive shelf cloud rolling in ahead of the storm’s core.

Now, let’s get into some more details about this early May severe weather event over the North Adriatic region.

WHAT IS A SUPERCELL STORM?

Supercell thunderstorms are the most intense of all thunderstorm types, and often produce damaging winds, large to even giant (gorilla) hail, and weak or strong/violent tornadoes. They are most common during the spring and summer worldwide.

Daytime heating or another source of warm air mass advection ahead of the frontal boundary leads to unstable air mass. That is known as potential instability. Extreme instability could develop when very hot and moist air is present, typically during the summer months.

One of the most important ingredients, the vertical wind shear causes the development of dynamic processes in the storm. Those affect the evolution, strength, longevity, and motion of the supercell storm. 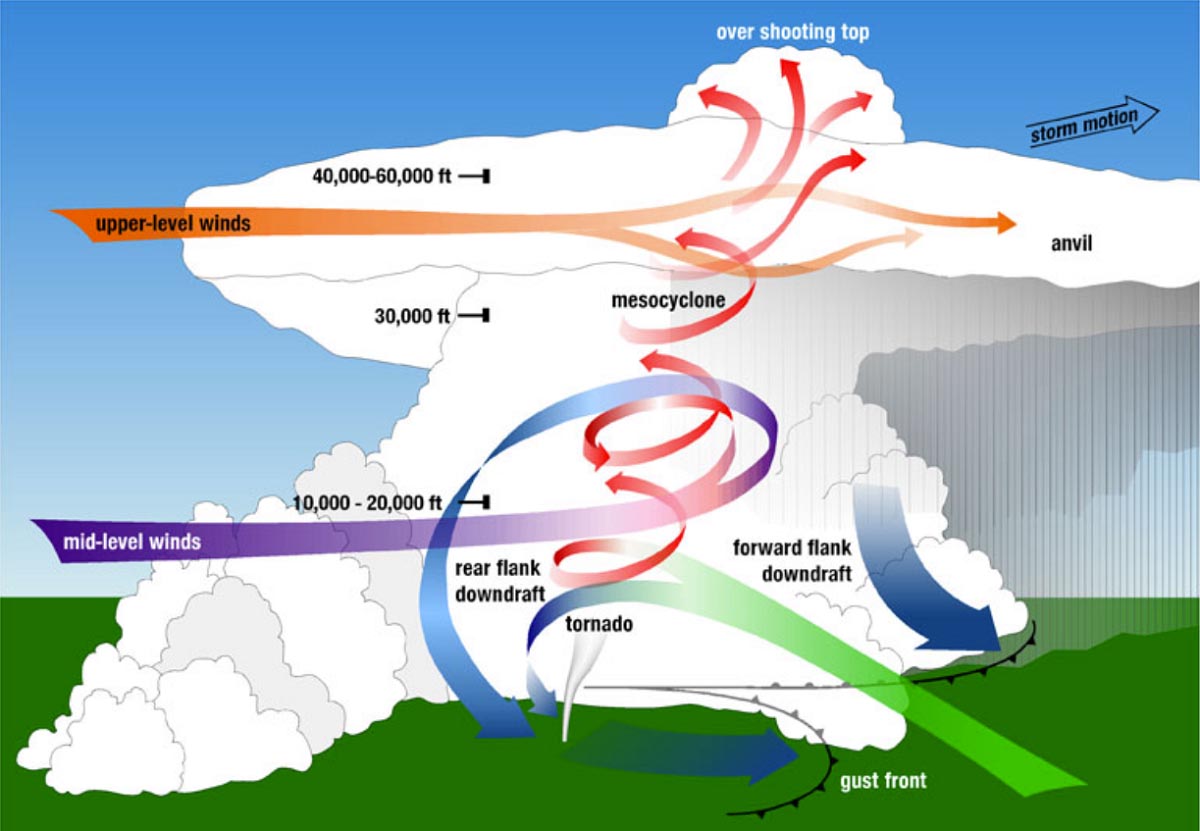 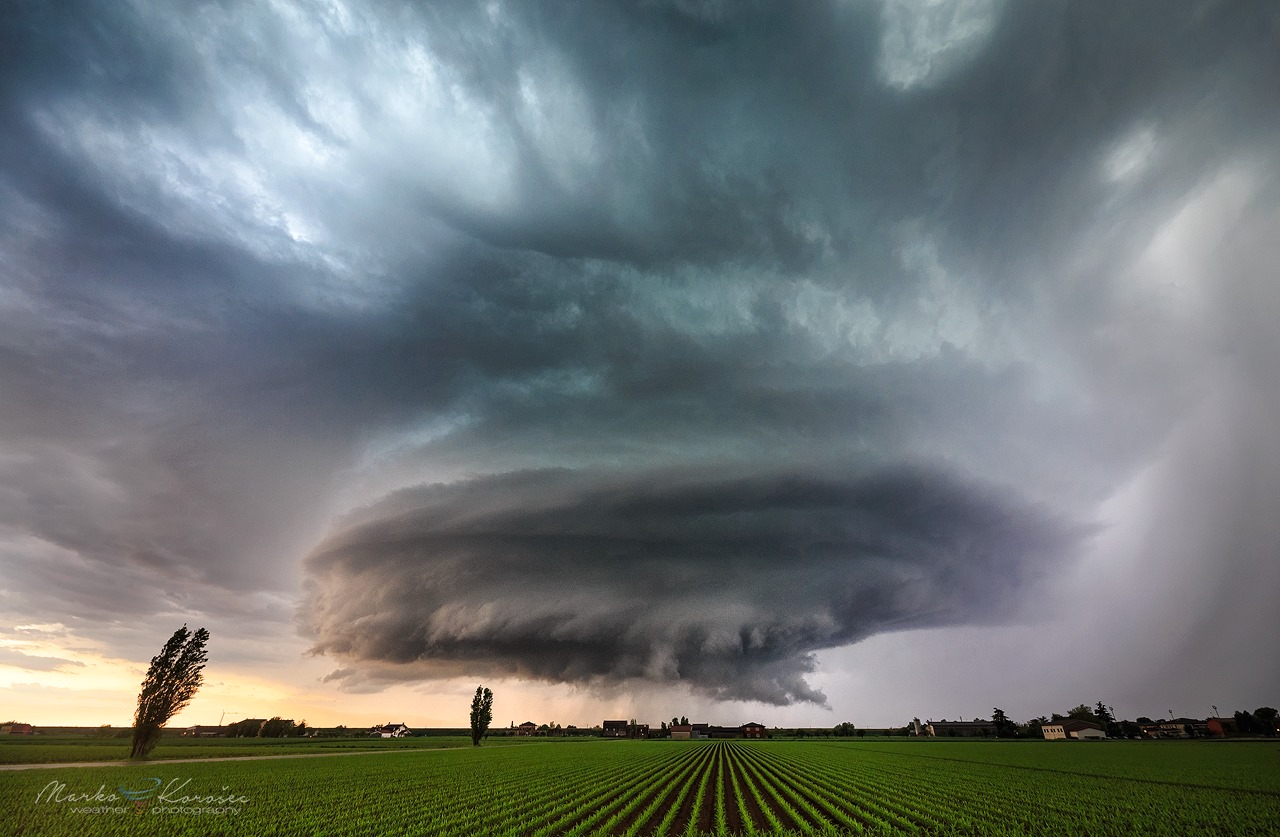 Above: Organized supercell storm near Montagnana, Italy (Po valley) on May 11th, 2019. This storm was also very early in the season. Photo by Marko Korosec

The combination of updafts and both downdrafts leads to the development of distinct visual features in supercells. While there is much variation in shape, size, and appearance, supercells share a number of distinctive features, e.g. tilted updraft tower, striated cloud structure of the mesocyclone, wall cloud, etc.

STORMS FORMED OVER NE ITALY AND SPREAD INTO THE TRIESTE GULF

Isolated to scattered convective storms have developed across northeast Italy plains, along the southeastward surging cold front over the Alpine region. The cold front was producing mostly stratiform rain along its eastern part, but more convectively driven activity further west.

Once the complex entered the sea, it gained additional strength and spread towards the coastal areas of the Trieste Gulf and Slovenian coast. We can notice two distinct supercells were actually embedded in this larger area of storms.

Looking at the visible satellite image, we can quickly notice a discrete supercell storm that has formed across the southern portions of the Friuli plain (NE Italy), and can be analyzed at the tail-end of the frontal convective activity.

The storm has brought large hail along the coast between Venice and Grado and then entered the North Adriatic while further intensifying on its way towards the northern Istra peninsula and southwest Slovenia.

The above image shows this well-organized storm while moving across coastal Slovenia at around 15.30 UTC (17.30 local time). Meanwhile, the cold front continued surging south into the northern Balkan peninsula.

The amount of lightning activity was pretty impressive for the early May storms, thanks to the good temperature contrast along the moving cold front.

Tail-end storms, known as tail-end Charlie supercell storms tend to be the strongest and most organized in the line as they have the best conditions available for their organization. They can lead to very damaging winds, large hail, and even tornadoes sometimes.

With the approaching of the storm complex to the Slovenian coast, there were two separate supercells visible. One was moving towards Trieste, Italy, and Koper, Slovenia. The second one was further west and was on its way for Umag, Croatia (NW Istra). They both were not affecting each other.

Here is the view of the eastern storm from Izola, Slovenia, with its core on the far right and large shelf cloud further left. 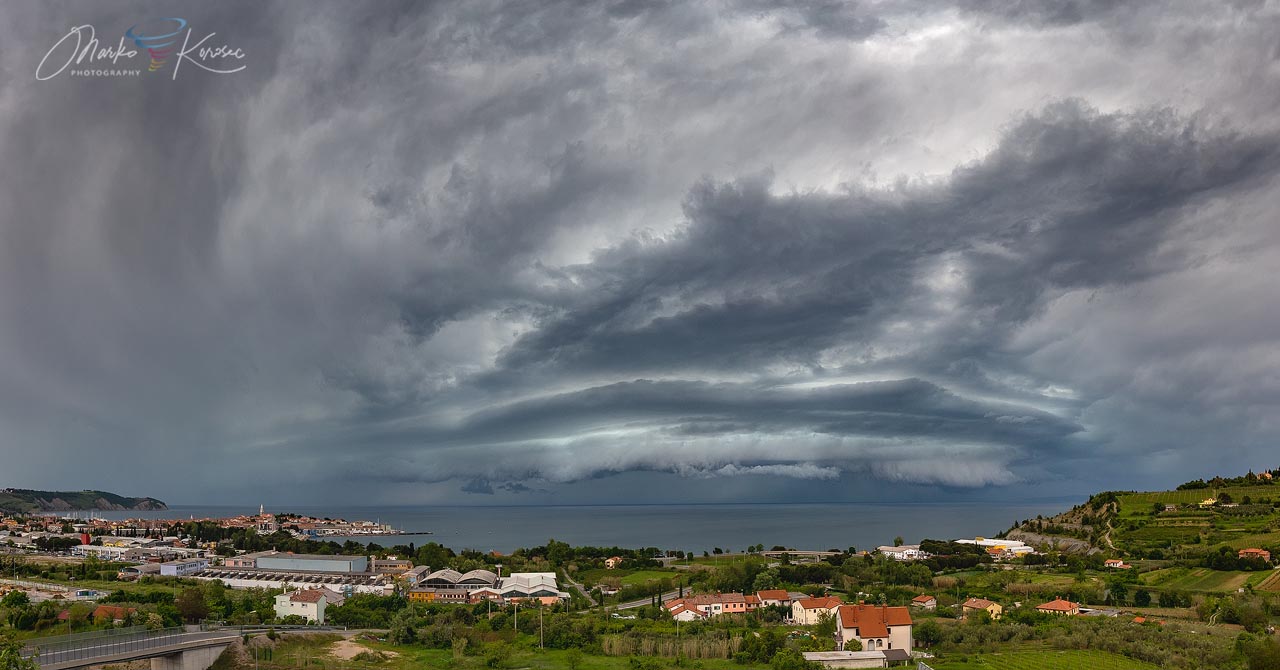 The western one was a proper right mover, a classic tail-end Charlie supercell. But the view from Izola was obscured, as it traveled south-southeast far left on the photo above.

Then, the focused supercell storm came much closer over the next 15-20 minutes, with the low wall cloud almost hidden on the far right while moving towards Koper and Trieste. But the shelf cloud was much more impressive at that time, thanks to a significant push of the rear flank downdraft (RFD) in the back of the storm. 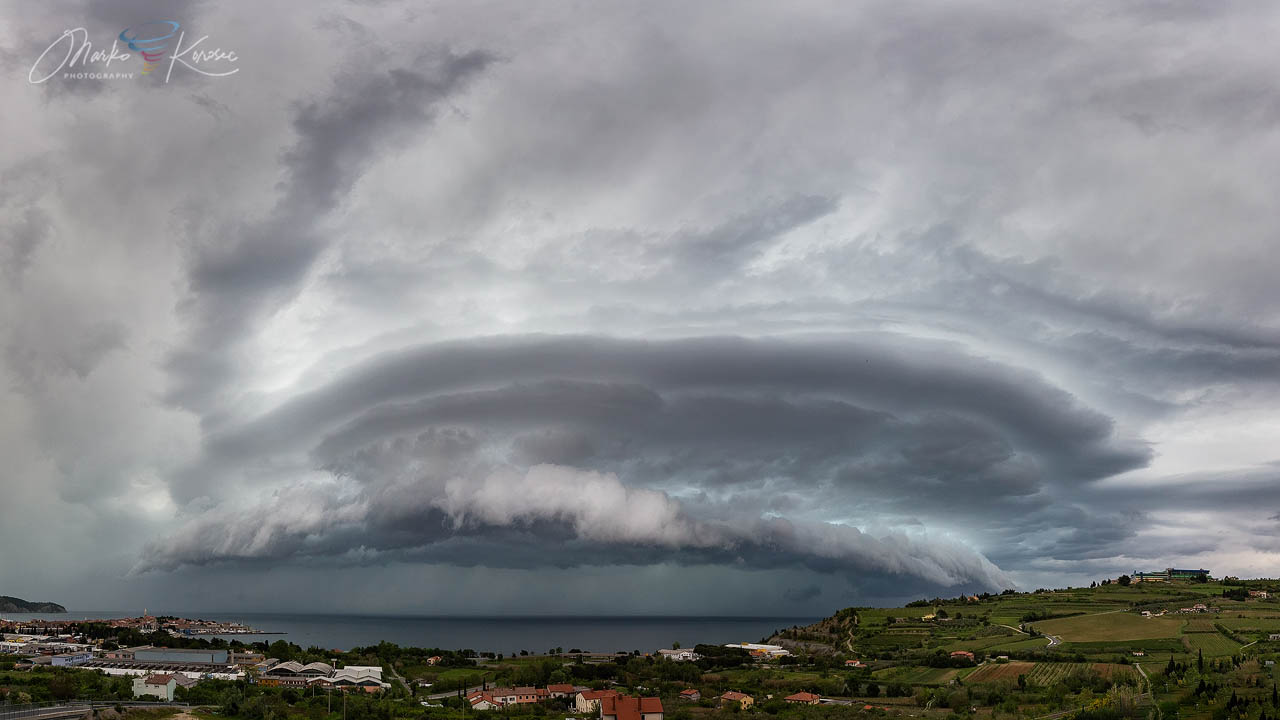 Soon after, the next phase revealed multi-layered mid-level striations of the storm, with still a clear sign the storm was rotating, therefore an obvious supercell storm behavior. The contrast between the coast and the cloudy sky was remarkable at this time.

Just a few minutes later, the view of the whole storm was spectacular. Below is the panorama of five photographs indicating the multi-layered shelf cloud with a lot of precipitation and massive winds beneath.

The storm then blasted into the Slovenian coast with some hail but mostly intense rain and gusty winds, approaching severe criteria (75-85 km/h was reported by local weather stations.

Here is another view of the core of the supercell while it was moving further inland near Kastelec, Slovenia. Notice a well-defined wall cloud with a massive RFD wind blast behind it. The front edge was very sharp and dynamic.

Once the storm arrived in the interior of the coastal region, it gradually began losing its strength but heavy rain and winds continued with the complex of storms while it was moving further south-southeast through the remainder of the afternoon.

As it often happens with supercells storms, especially with those near the tail-end of the frontal boundary, large hail and strong to severe winds were reported. Enough surface heating in the early afternoon developed marginal instability while mid-level layers were quite dry, so a rather good example for large hail potential. 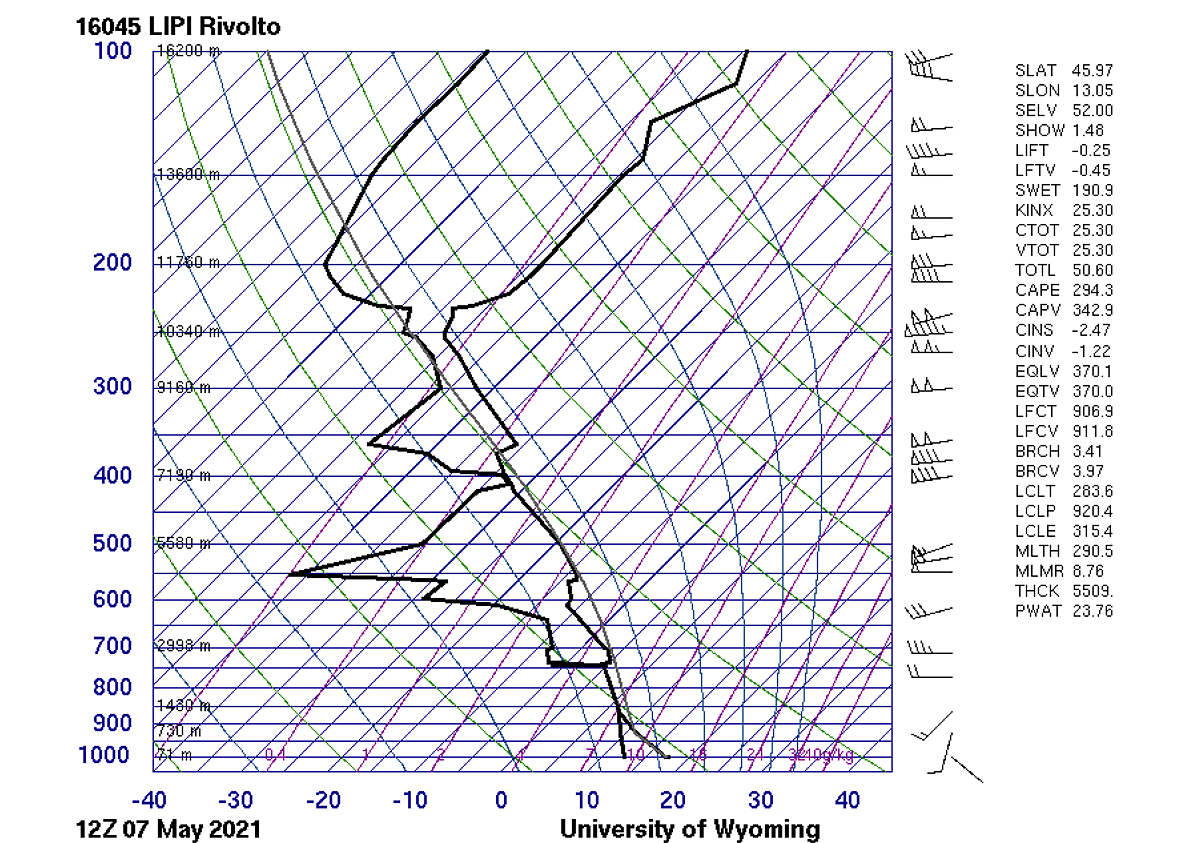 While the storm was organizing in the Friuli plains, up to around 2-3 cm hailstones were reported in southern parts of northeast Italy. Along with very heavy rain, locally flash floods, and severe winds.

Also on the other side of the Adriatic sea, when storm blasted into the Slovenian coast and Trieste area, 1-2 cm hail was reported around the city, Pesek and Kozina.

The hail accumulation swath along the road Bazovizza-Pesek was reported by our trusted weather spotter dr. Renato R Colucci, president of the Società Meteorologica Alpino-Adriatica.

Here is another photo of hail covering the ground along the highway near Unec, Slovenia. The hail was around 1-1.5 cm in diameter there. The photograph was kindly reported by Urban Puhar. 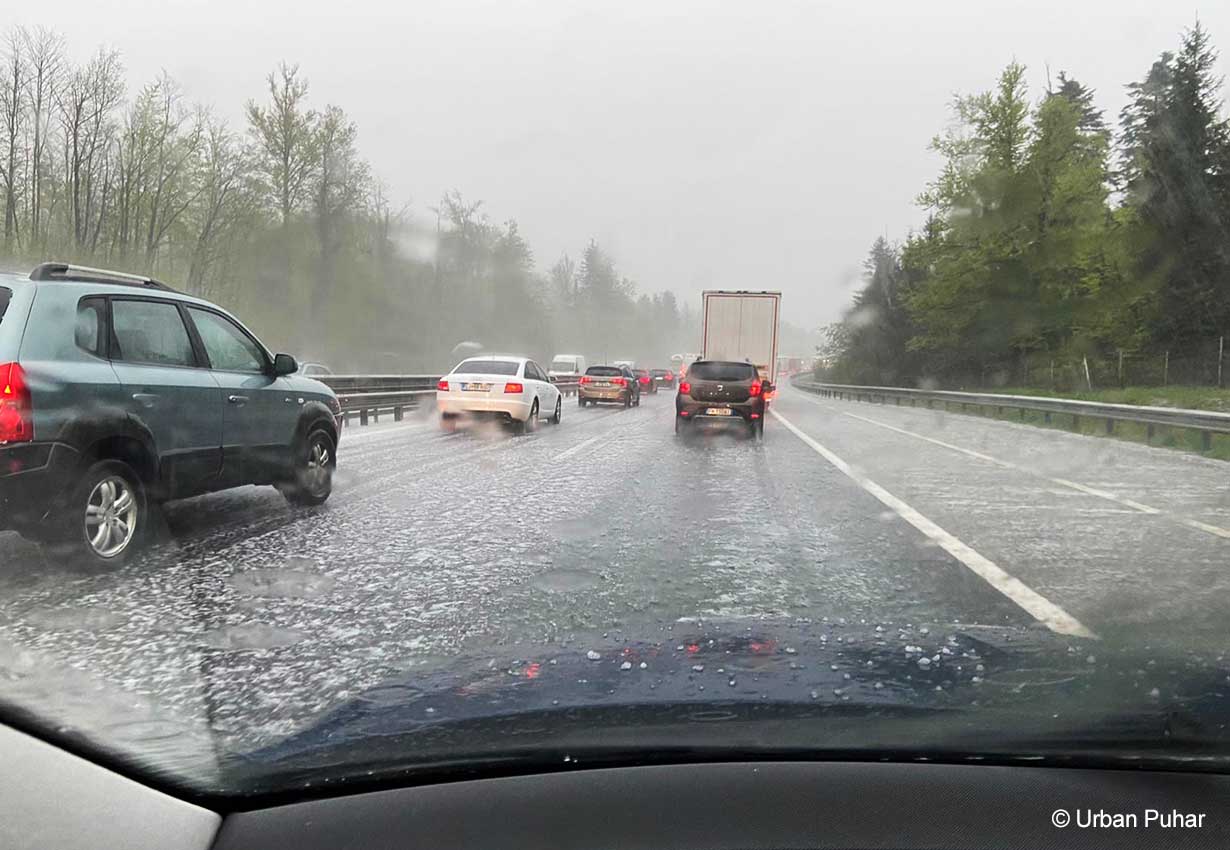 ***The images used in this article were provided by ARSO, Windy, and Blitzortung.

Supercell outbreak in North Italy at the end of August 2020