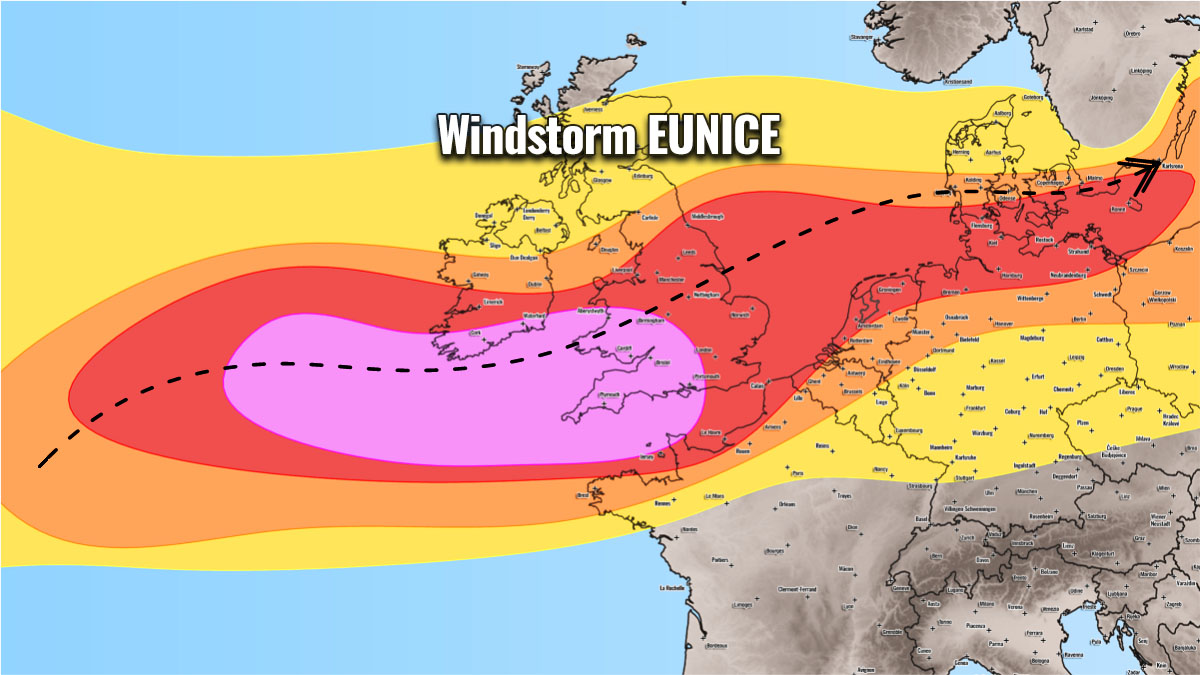 A particularly dangerous severe wind event is expected across portions of western Europe from early Friday through Friday night, associated with a violent windstorm Eunice.

A rapidly developing North Atlantic cyclone is moving across the Bay of Biscay and will bring severe to extremely severe and destructive winds to southern Ireland and southwestern England on Friday. 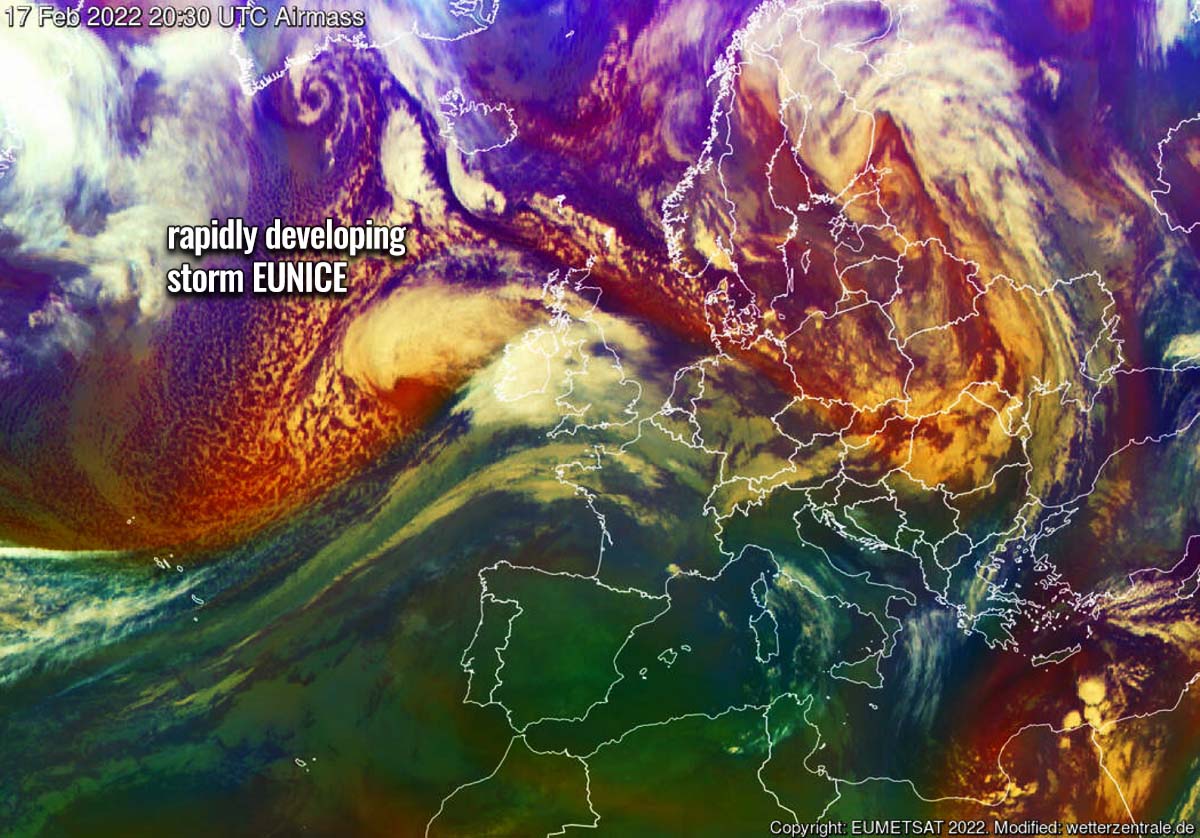 A powerful jet stream has developed between a large blocking High over southern Europe and a very deep upper trough/low over the North Atlantic.

It is ejecting violent surface cyclogenesis that will act as a bomb cyclone as its central pressure deepens for more than 24 mbar over the 24-hour period. 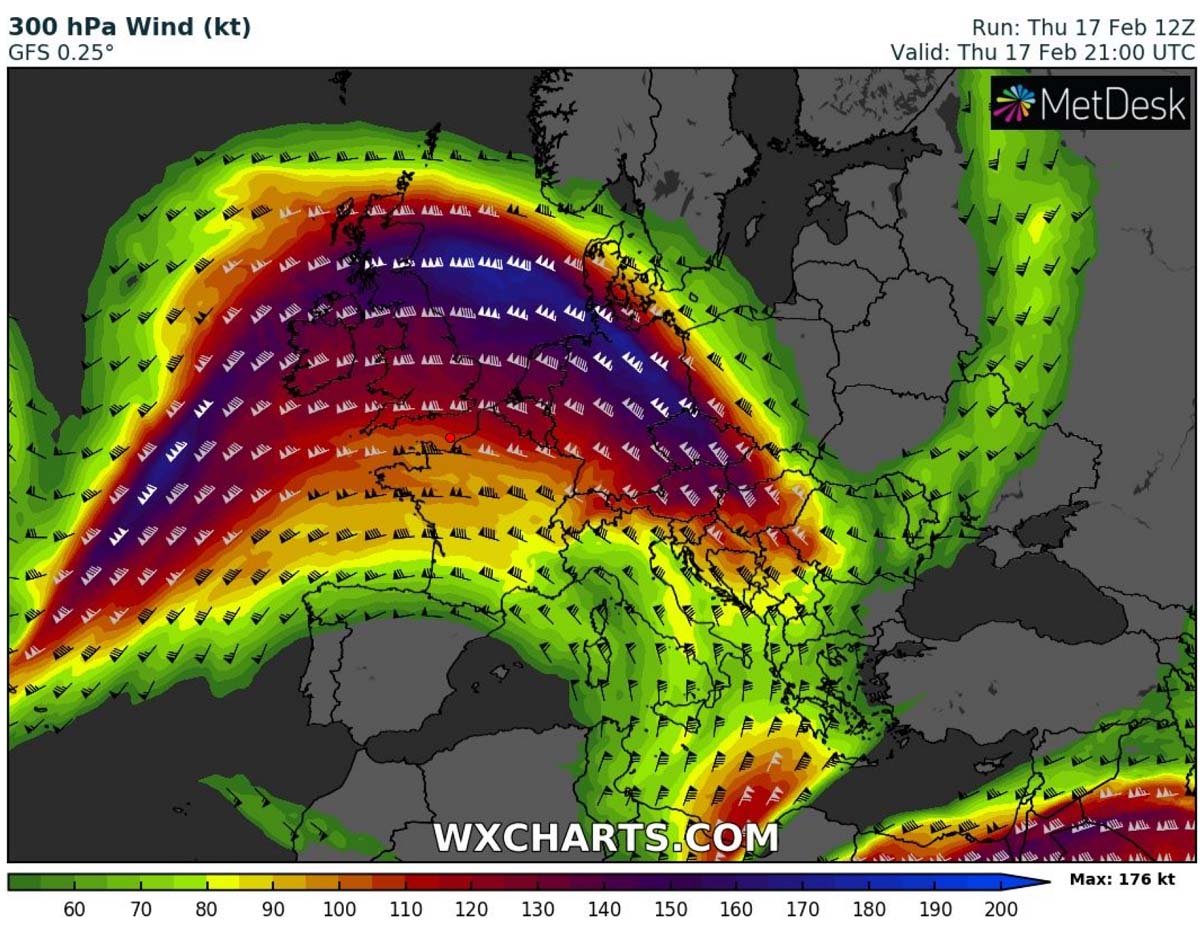 There are three main areas that will be the most affected:

*** Destructive winds locally in excess of 150 km/h is increasingly likely and for this reason, a HIGH-risk threat level has been issued for portions of southern Ireland, southwestern England, the English Channel, and extreme northern France coast on Friday. ***

Above: Video animation of the windstorm Eunice explosive development from the North Atlantic into western Europe from Thursday evening through Saturday morning, Feb 19th, 2022.

Storm Eunice should cause significant disruption and dangerous wild weather conditions due to extremely severe winds on Friday. Flying debris resulting in danger to life, damage to buildings and homes, with roofs blown off and power lines brought down, and uprooted trees are likely to be expected. 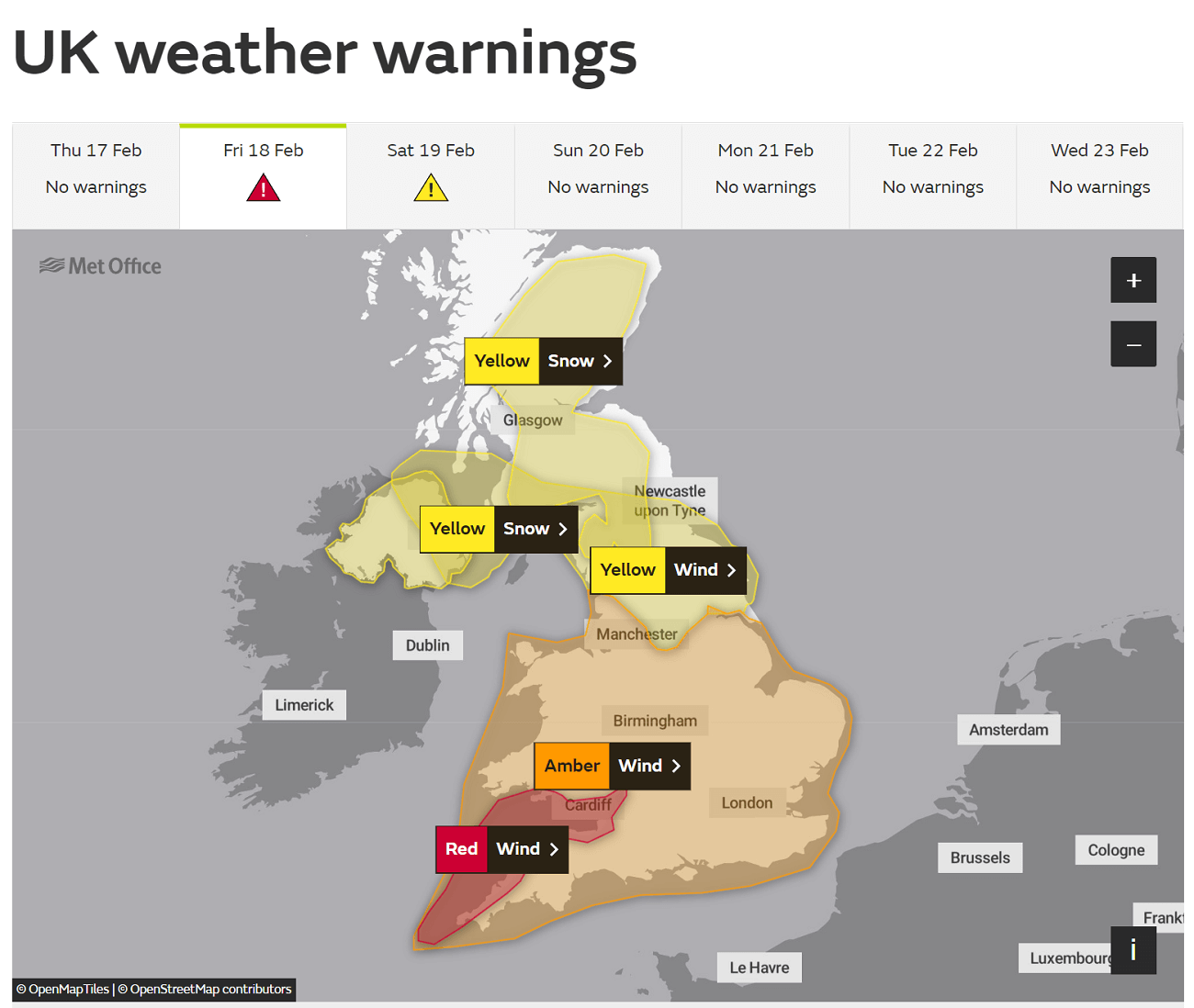 Across southern England and Ireland, some roads, bridges, and railway lines could be closed, with delays and cancellations to the bus, train, ferry services, and flights.

Power cuts and outages affecting other services, such as mobile phone coverage could follow as well. 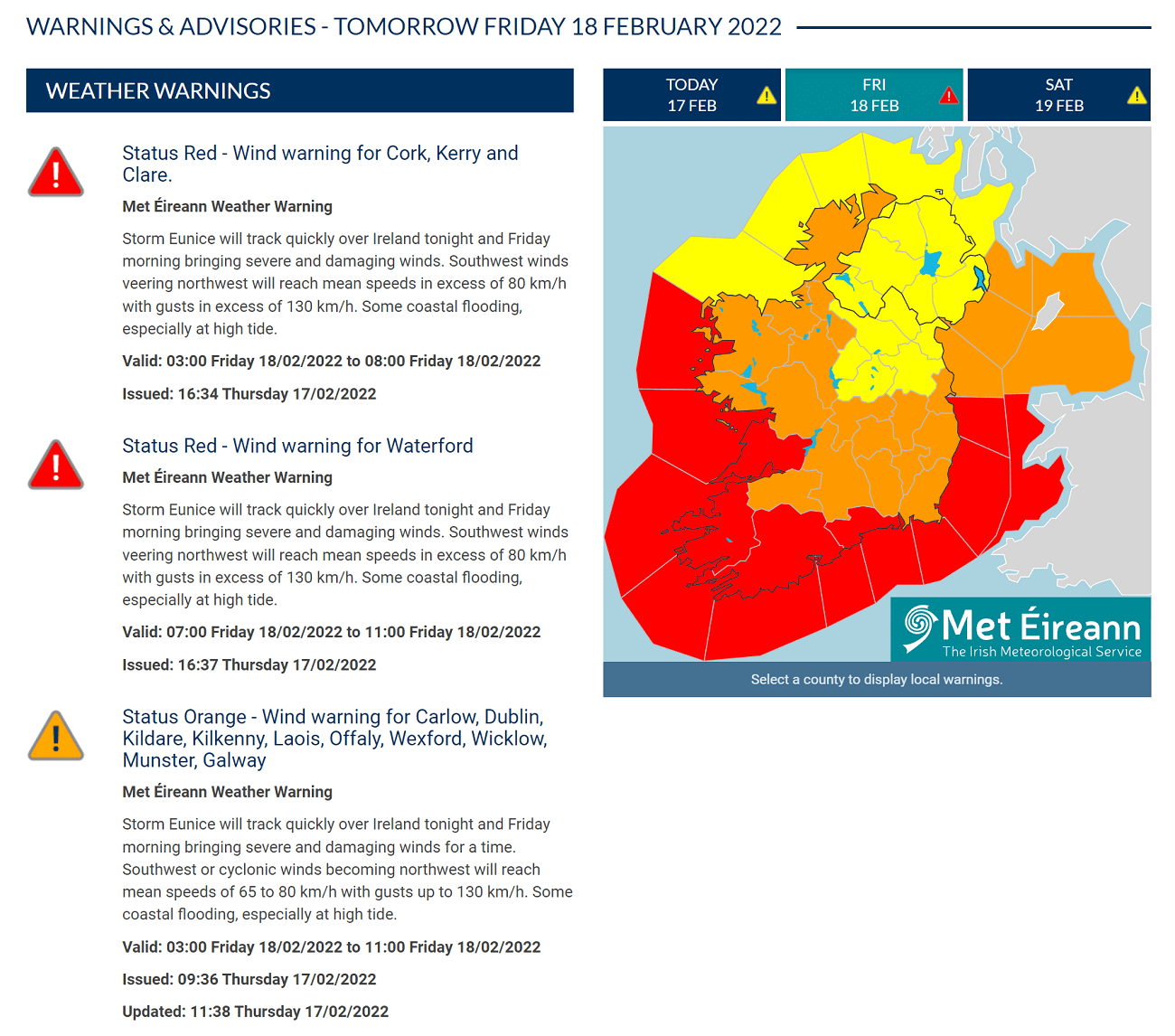 Along the coastal areas, major waves and beach material will likely be thrown onto coastal roads, sea fronts, and homes, including flooding of some coastal properties in the most exposed areas. 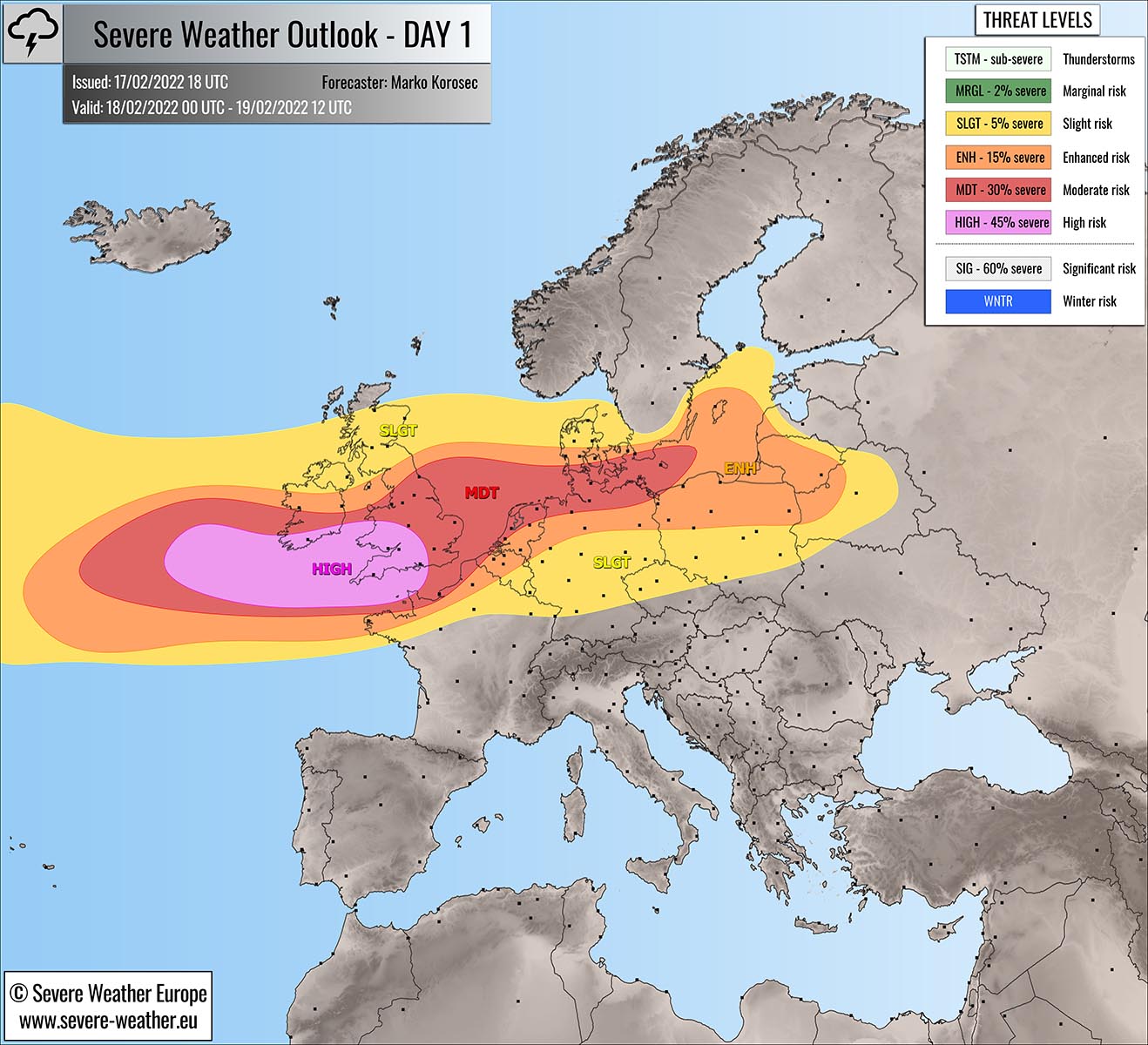 A robust weather pattern has developed across the North Atlantic this Thursday, with a very deep upper trough emerging into western Europe. To its south, a large high-pressure system is dominating southern and central Europe. The trough will be advancing east-northeast through Friday with a frontal system moving across Ireland, England into Germany, and the Baltic Sea.

At the surface, explosive cyclogenesis is underway across the northern portions of the Bay of Biscay. A rapidly deepening surface pressure will result in a dangerous Atlantic storm Eunice, heading across southern England towards the North Sea on Friday. While the northern side of this frontal system brings heavy rain and snow, the front-end and southern portions of the cyclone lead to a particularly dangerous and damaging windstorm. 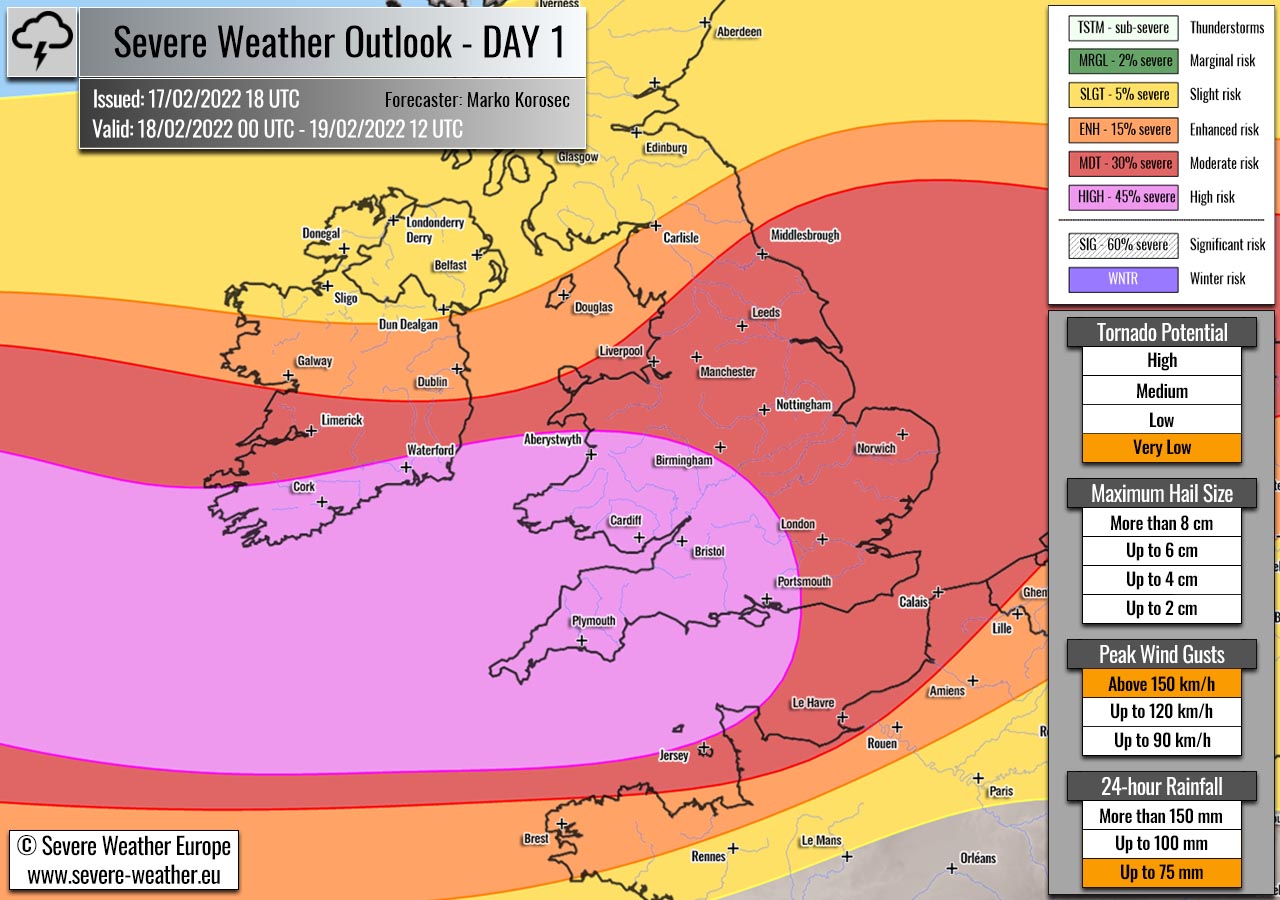 HIGH risk has been issued for southern Ireland into Wales and southwestern England, western portions of the English Channel, and extreme northern France coast with a threat for severe destructive winds, and heavy rain squalls.

MDT/ENH risks have been issued for areas surrounding the HIGH-risk area including most of Ireland, England, northern France, most of Belgium, the Netherlands, southern North Sea, northern Germany into northern Poland, and the Baltic Sea with a lesser extent of severe to extremely severe winds and heavy rainfall.

The expected storm coverage of dangerous weather will be lower than inside the highlighted purple HIGH-risk area. 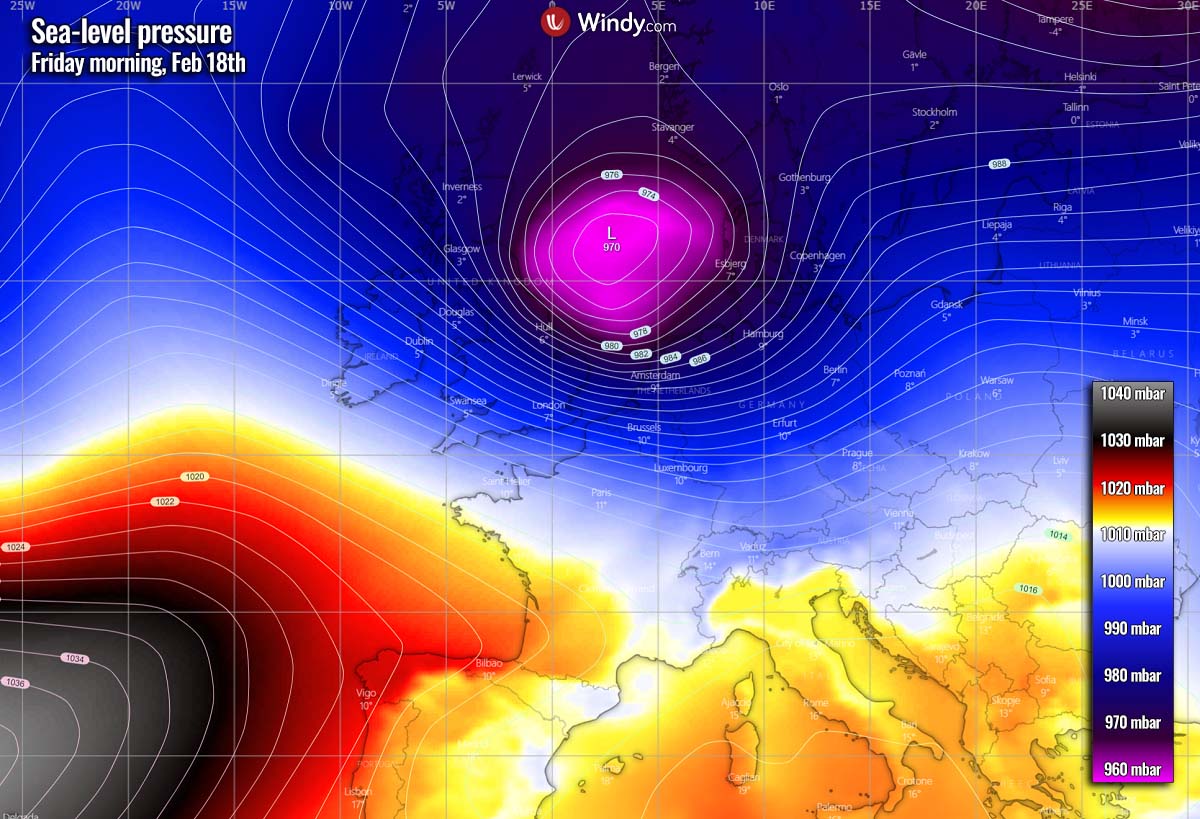 A particularly dangerous weather situation is forecast to take place Thursday night through Friday into Saturday morning across portions of western Europe, associated with a violent windstorm Eunice.

The region has already been swept by damaging windstorm Dudley Wednesday night into Thursday morning and will be blasted by violent and potentially destructive winds once again. Especially across Ireland and the southern UK, Wales, and England in particular. 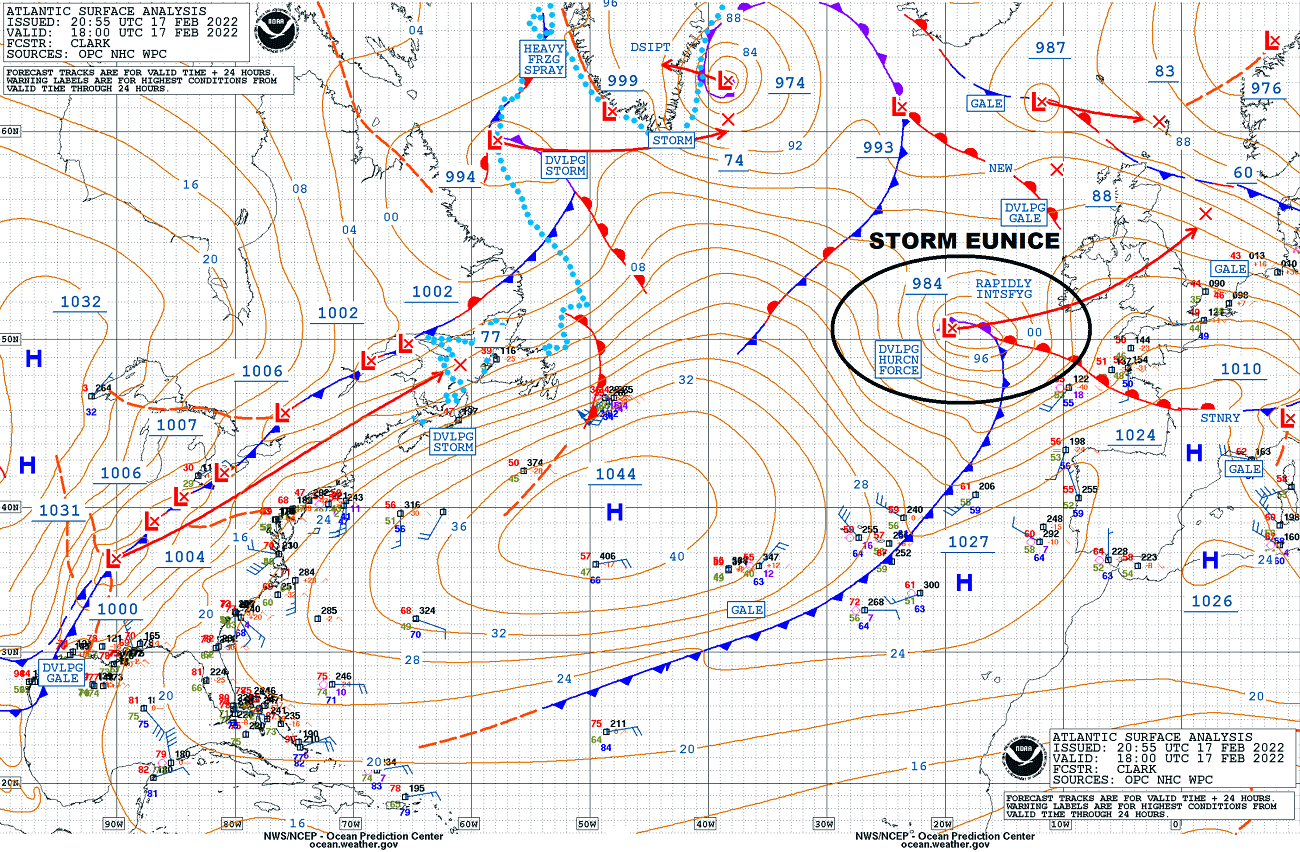 The surface pressure is already significantly deepening, storm Eunice is rapidly developing, approaching southern Ireland and southwestern England Thursday night. The central pressure is forecast to deepen for about 20-25 mbar in 24 hours period, that’s about the borderline for a bombogenesis. A cyclone that deepens for more than 24 mbar in one day.

Through Friday, winds will be picking up and should already reach southern Ireland by early morning, gradually spreading into Wales and southwestern England through the late morning and midday hours on Friday.

The highest gusts are likely to reach or even exceed 150 km/h across the northern portions of the Bay of Biscay, nosing into southern Ireland and southwestern England. 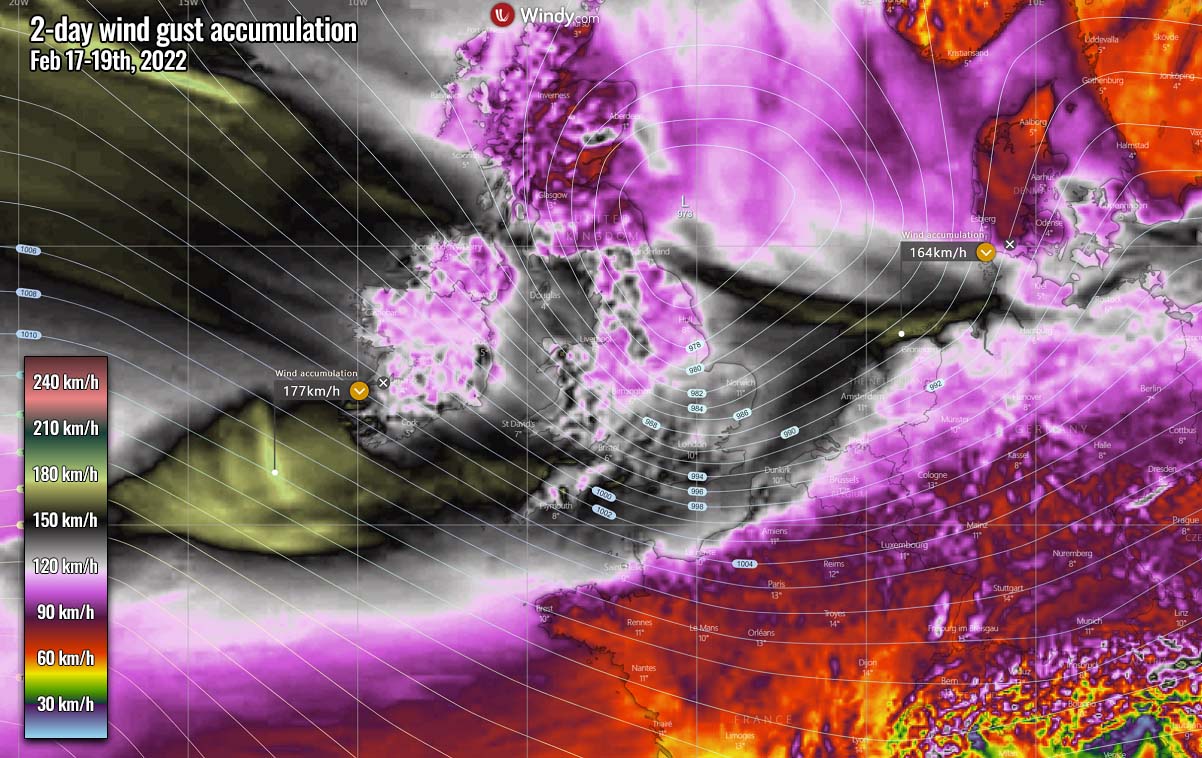 Severe winds will be spreading east-northeast through Friday, gradually weakening across the HIGH-risk area but worsening across the MDT/ENH risk areas farther across the English Channel, North Sea, Benelux, and towards northern Germany.

Heavy rain squalls will be associated along the moving front, spreading across Ireland, Wales, and England from early Friday into the late morning hours. Graupel or snow showers could follow in the system’s wake. To the north of the tracking center low, heavy snow with near blizzard conditions is possible, with about 10-20 cm of snow possible in places. 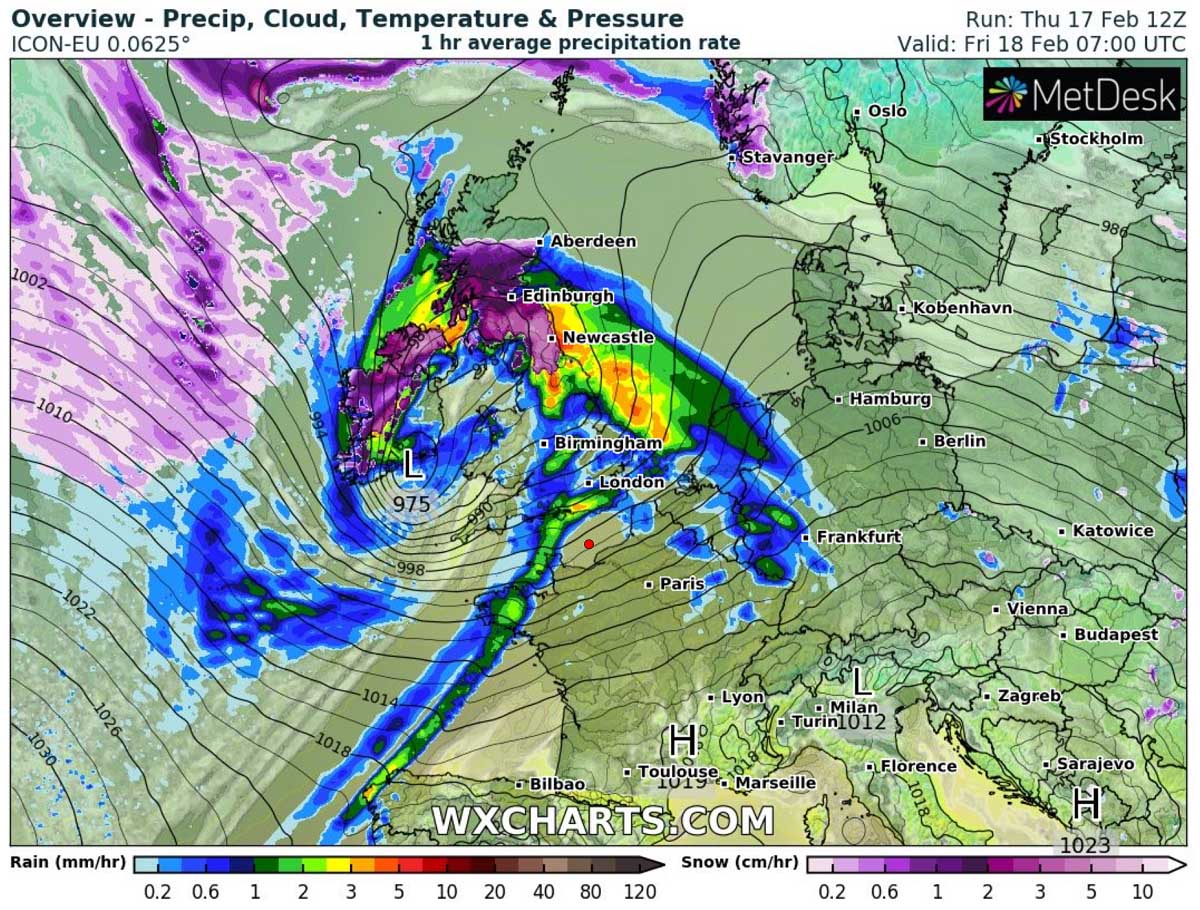 Once the low departs on Friday evening, extremely windy conditions will vanish as well.

+++ Weather forecast for Germany, Denmark and Baltic Sea into Poland +++ 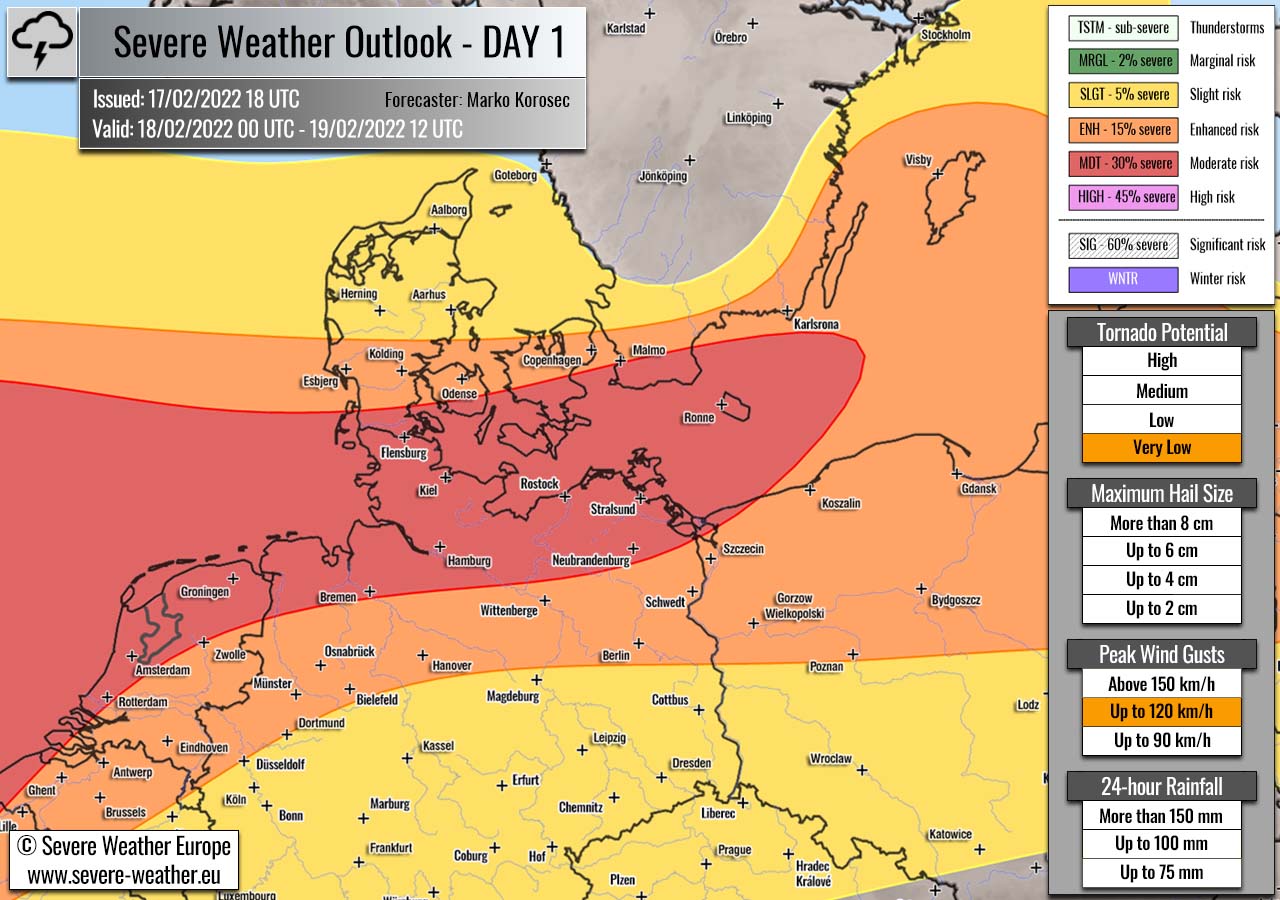 ENH/SLGT risks have been placed surrounding the MDT risk area across Germany, Denmark, northern Czech Republic, Poland, Baltic Sea, Lithuania, and western Belarus with threat for severe winds but with lesser coverage than within the MDT risk area. 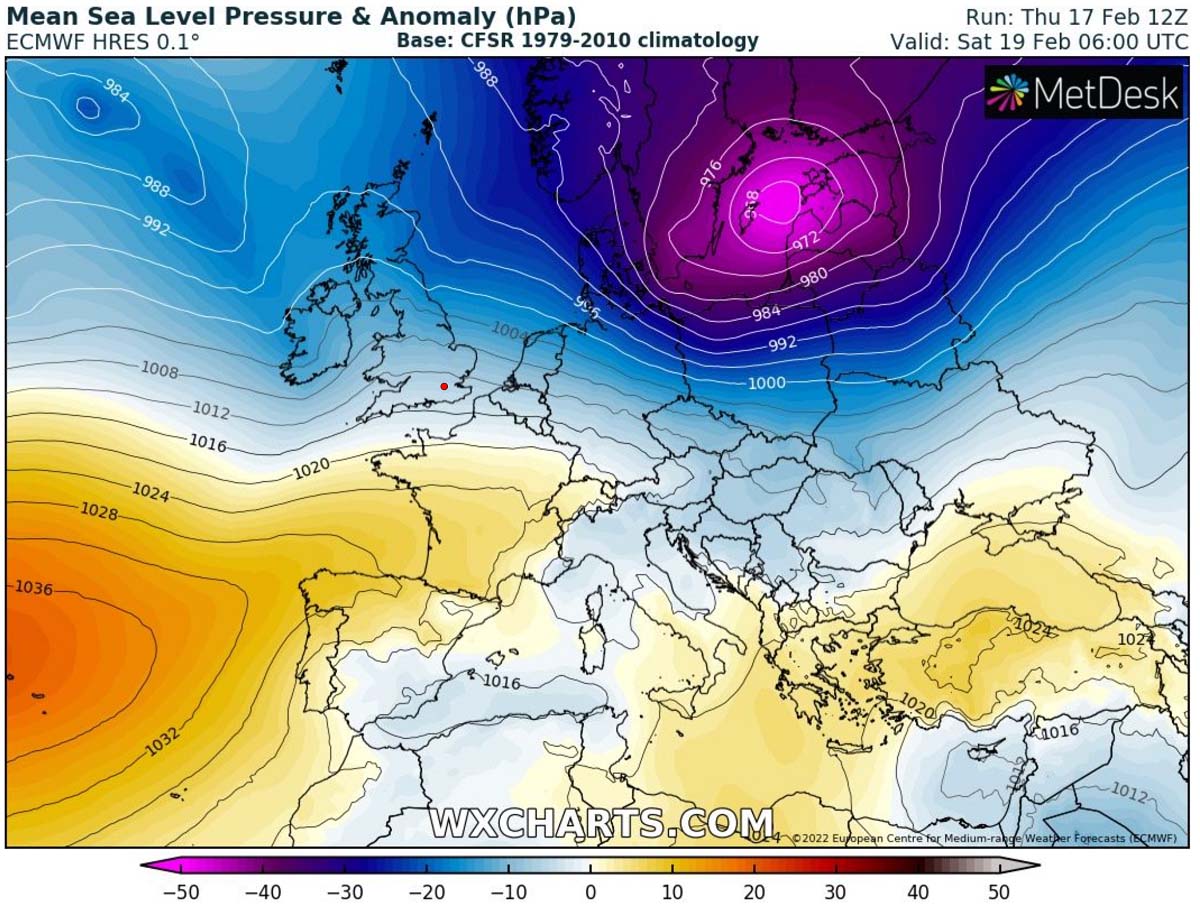 Severe wind threat is forecast to arrive through the Friday afternoon and move east quickly overnight to Saturday along and behind the racing cold front. Threat across northern Germany and Poland will be maximized through early Saturday morning, roughly from 00-06 UTC on Feb 19th.

Peak gusts are likely to reach 120-140 km/h along the far northwestern Germany and portions of the southeastern North Sea coast.

Through Saturday morning, the frontal system will move into the Baltic region with a mix of heavy snow and rain, together with increasing winds into severe threat criteria. The highest gusts could exceed 120 km/h along the Baltic coast of Poland. Up to around 90-110 km/h across north-central Poland, southern Lithuania, and western Belarus on Saturday. 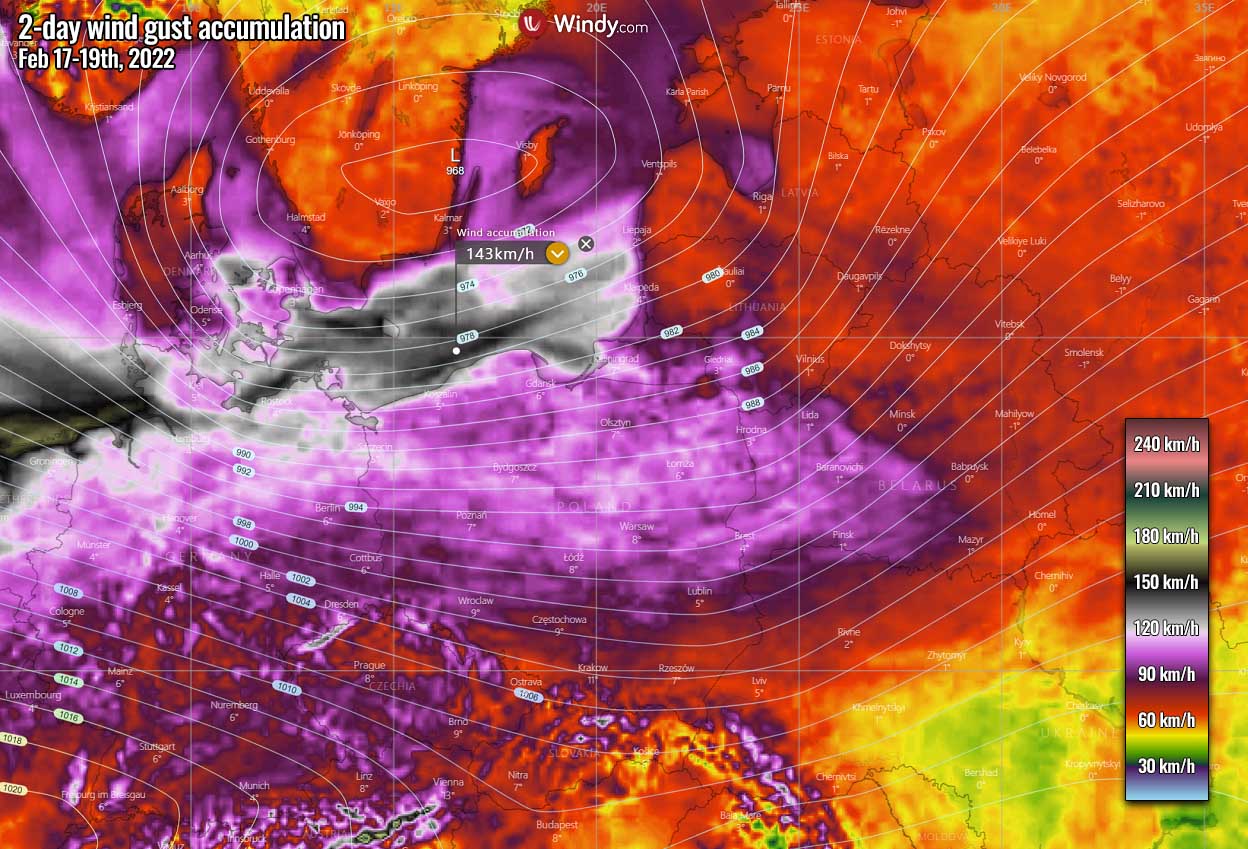 Another storm Franklin will likely follow for western Europe on Sunday into Monday, stay tuned!