The major hurricane Florence is beginning to strengthen again this morning, after some fluctuations were observed overnight. It maintains a Category 4 strength and is expected to remain at similar strength or even slightly stronger prior to making landfall tomorrow late afternoon. Central pressure has been around 945 mbar with sustained winds of 140 mph.

This morning’s water vapour satellite revealed some asymmetrical appearance of the whole system, with some dry intrusion in the SW quadrant. This could mean there is some weak shear effecting this part of Florence, but the latest trends are showing the closing of this quadrant as well. The hurricane is getting more symmetrical and should continue to maintain powerful Category 4 strength or even intensify more in the coming 36 hours, based on the latest IR satellite imagery.

Hurricane warnings have already been issued for coastal areas of North Carolina and parts of South Carolina coast. Florence is expected to impact these areas as a major hurricane of at least Category 3 or even Category 4 strength storm. 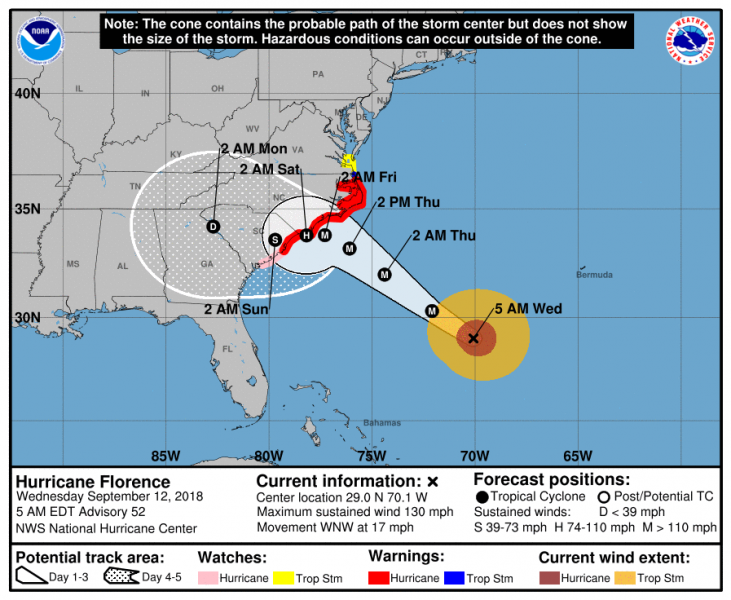 Various models forecast regarding the amount of rainfall expected over Carolinas – an extreme amount with locally 40 inches or more rainfall is possible: 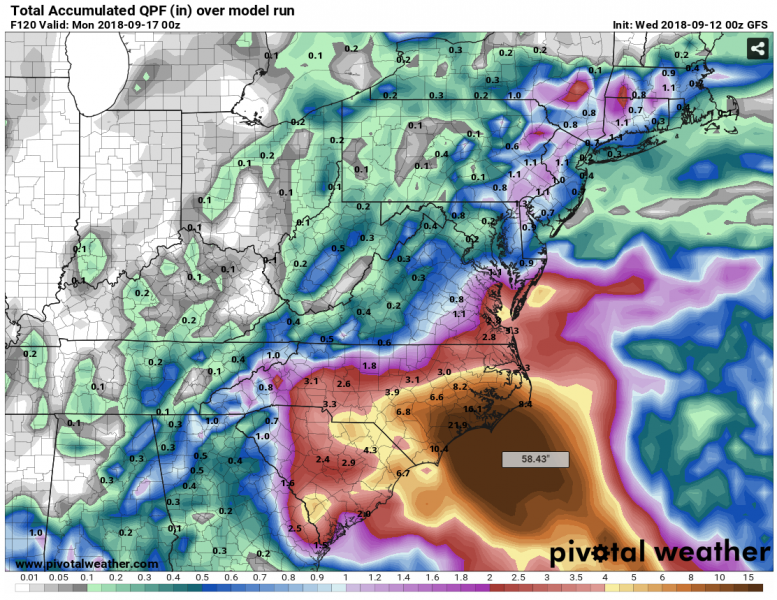 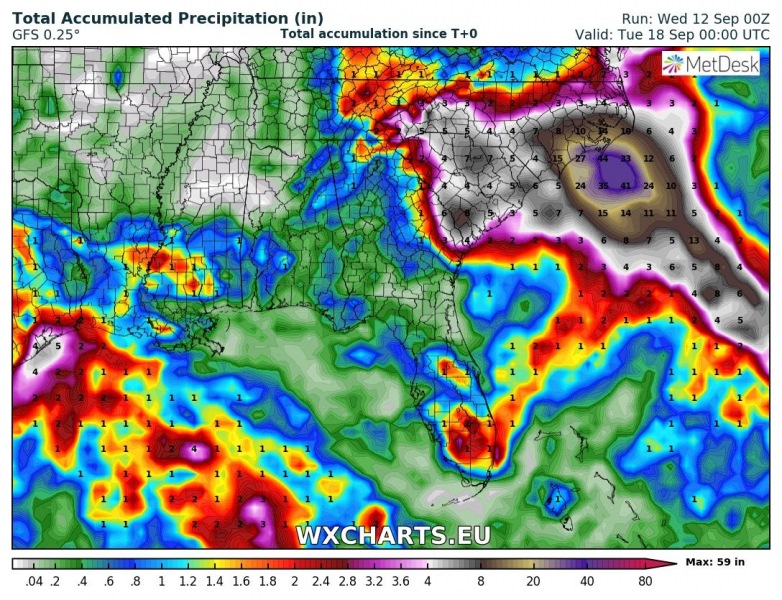 Life-threatening, catastrophic flash flooding and significant river flooding is likely over portions of the Carolinas from late this week into early next week, as Florence is expected to slow down and possibly almost stall as it approaches the coast and move inland. Based on latest model runs, its track will potentially move WSW along the coast. 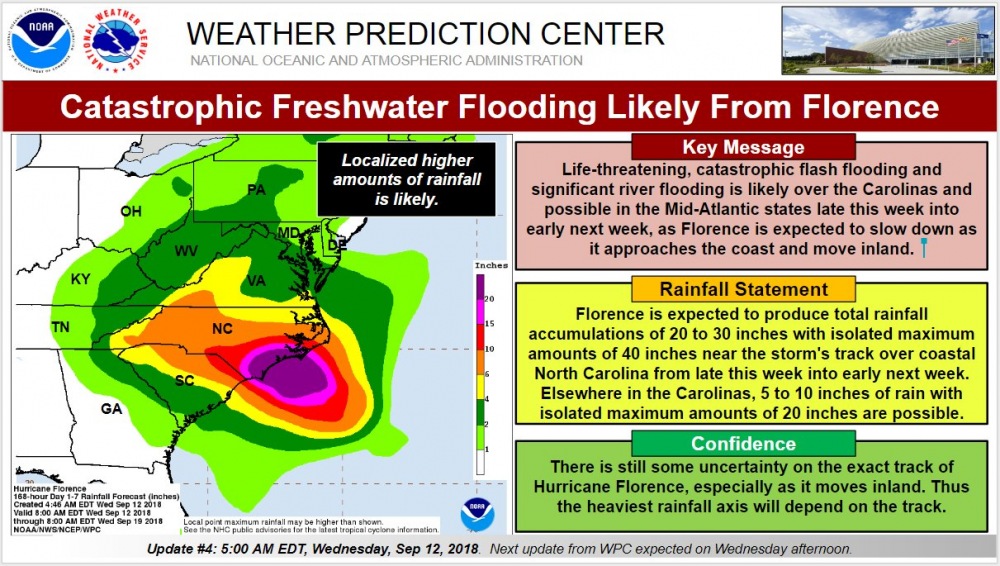 An impressive detail from the NAM model for Thursday afternoon hours, local time. A large hurricane with a well-defined eye surrounded by intense storms producing torrential rainfall and 150 mph winds!

The eye of Florence remains very distinct in infrared satellite imagery this morning. There has been little change to the cloud top temperatures surrounding the eye overnight, however, the overall cloud shield and central dense overcast has become slightly more symmetric. An Air Force Reserve Hurricane Hunter aircraft that was in the hurricane until just after midnight measured a peak 700-mb flight-level wind of 130 kt, and a SFMR wind of 107 kt in the northeast eyewall. A blend of these data and recent subjective and objective satellite intensity estimates supports an initial wind speed of 115 kt. Florence will be moving over sea surface temperatures of around 29C and through an area of low vertical wind shear during the next day or so. These conditions favor some strengthening, but eyewall replacement cycles could cause some fluctuations in intensity during that time. After that time, an increase in southwesterly shear, upwelling, and interaction with land is likely to lead to some weakening, however, Florence is expected to remain a dangerous major hurricane as it approaches the coastline. The new NHC intensity forecast is near the higher statistical guidance through 48 hours, then follows the trend of the decay SHIPS model after that time.

Florence is moving west-northwestward or 300 degrees at 15 kt. There has been no change to the track forecast or reasoning for the first 36-48 hours, as Florence will continue to be steered
west-northwestward to northwestward around the southwestern portion of a mid-level ridge centered northeast of Bermuda. By late Thursday, a mid-level ridge is forecast to begin building over the east-central United States, which is expected to cause Florence to slow down significantly by 48 hours. The track guidance is in good agreement through the first couple of days of the forecast period, and the NHC track forecast again brings the center of the hurricane very close to the coasts of North and South Carolina within 48 hours. Later in the period, the dynamical model spread increases but most of the guidance has continued its southward shift, and now take Florence southwestward near the coast of South Carolina by day 4. The NHC track has been adjusted southward at days 4 and 5, and is a little north of the consensus out of respect for continuity, however, the GFS, ECMWF, and the ECMWF ensemble mean is south of the NHC track forecast, and additional southward adjustment may be warranted in future advisories.

It is important for users to realize that significant impacts extend well away from the center of Florence, and serious hazards such as a dangerous storm surge and flooding rains will cover a large area regardless of exactly where the center moves.

1. A life-threatening storm surge is now highly likely along portions of the coastlines of South Carolina and North Carolina, and a Storm Surge Warning is in effect for a portion of this area. All interests from South Carolina into the mid-Atlantic region should complete preparations and follow any advice given by local officials.

2. Life-threatening, catastrophic flash flooding and significant river flooding is likely over portions of the Carolinas and Mid-Atlantic states from late this week into early next week, as
Florence is expected to slow down as it approaches the coast and moves inland.

4. Large swells affecting Bermuda and portions of the U.S. East Coast will continue this week, resulting in life-threatening surf and rip currents.

Next updates will be posted later this afternoon, stay tuned!

Share on TwitterShare on RedditShare on FacebookShare on PinterestShare on WhatsApp
Mid September heat wave across south-central Europe
← Previous
An exceptional view of hurricane Florence eyewall from space
Next →
Comments are closed.