The now Category 4 hurricane Florence continues on track with previous simulations, it has slightly weakened, but its forecast track should bring it into North Carolina on Thursday. Latest satellite imagery reveals a cloud-filled eye with an inner eyewall collapsing and outer eyewall developing. This is a sign of the eyewall replacement cycle ongoing – once it is completed, the outer eyewall will dominate and a bigger eye is likely to appear and hurricane will begin strengthening again. 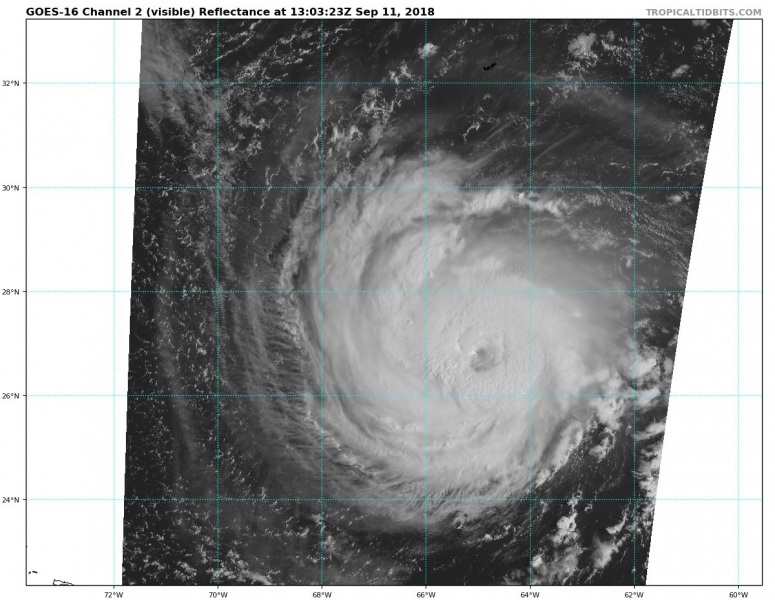 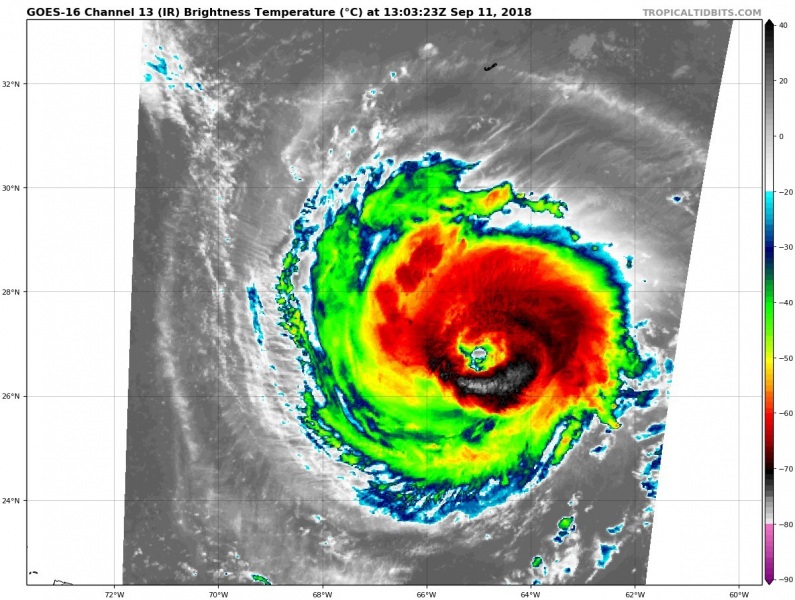 Latest NOAA Hurricane Hunters pass through the hurricane reveals a very intense wind field in the SW and SE quadrants and slightly higher pressure compared to yesterday. Florence will begin deepening in a few hours when the eyewall replacement cycle will be completed. Could become a Category 5 storm in the next 24 hours. 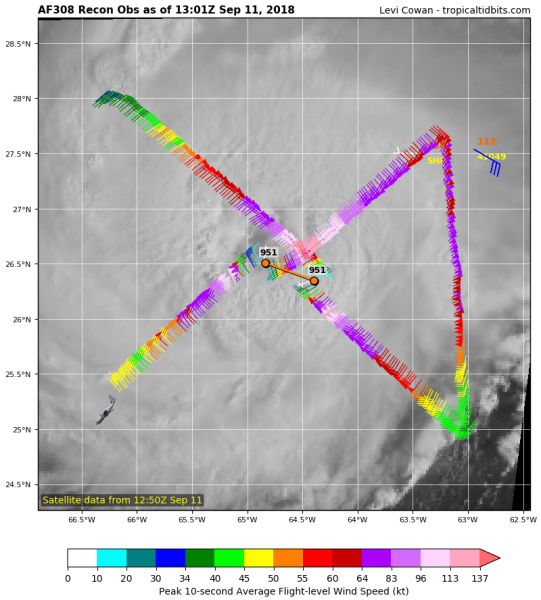 Official National Hurricane Center (NHC) forecast track – hurricane watches have already been issued for coastal areas of South and North Carolina. Landfall is probable in Thursday daytime hours and bring a devastating storm surge, intense rainfall and at least a Category 3 (if not 4 strength) force winds. 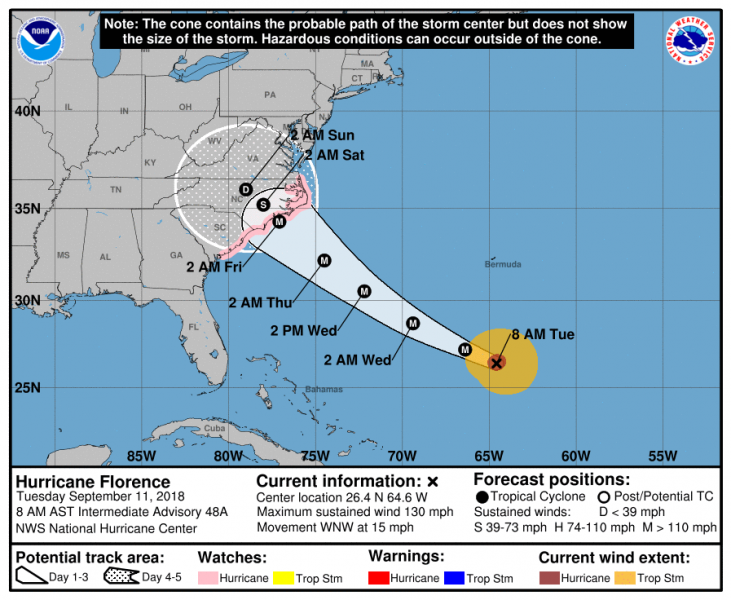 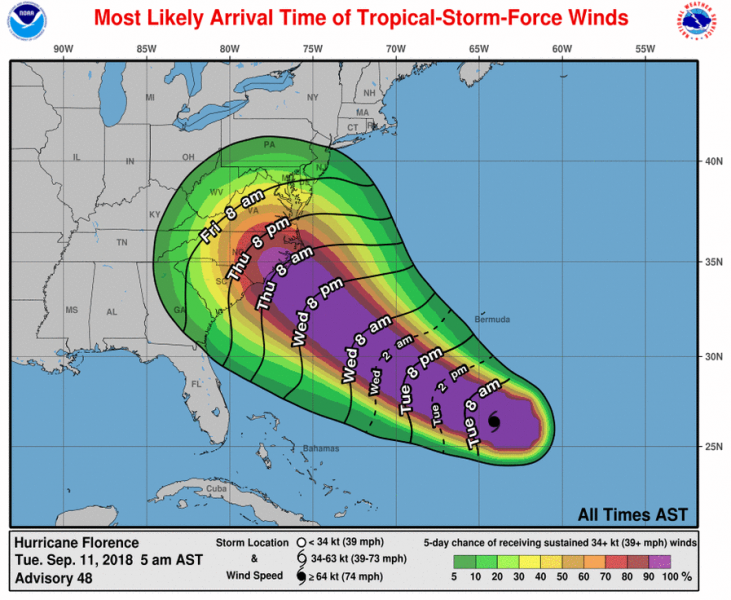 Recent satellite imagery shows that the eye of Florence has become cloud filled and an earlier 0441 UTC microwave overpass revealed a double eyewall structure. These observations suggest that an eyewall replacement cycle is likely underway. Subjective and objective Dvorak current intensity numbers have not changed so the initial intensity will remain 120 kt for this advisory.
An Air Force Reserve Hurricane Hunter mission is en route to the storm and should provide a better assessment of Florence’s structure and intensity this morning. NOAA buoy 41049 located
about 80 nmi north of the eye, has reported tropical-storm-force winds during the last several hours and seas as high as 23 ft.

Florence’s upper-level environment is predicted to remain quite favorable while the storm traverses sea surface temperatures of around 29C over the next 48 hours. Additional strengthening is
forecast during this time, but some fluctuations in intensity are likely due to eyewall replacement cycles. The updated NHC intensity forecast once again calls for additional intensification and brings Florence to near category 5 strength within the next 24 to 36 hours. After 48 hours, a slight increase in southwesterly shear could result in some weakening, but Florence is expected to remain an extremely dangerous hurricane when it approaches the U.S. coastline.

Florence has accelerated as anticipated and is now moving west-northwestward or 290 degrees at 13 kt. The track forecast reasoning has not changed much. A mid-level ridge to the northeast
of Bermuda is expected steer Florence quickly west-northwestward to northwestward toward the southeast United States coast over the next 2 to 3 days. By 72 hours, a high pressure ridge building over the Upper-Midwest and Great Lakes regions is forecast to cause a significant reduction in Florence’s forward speed and the hurricane is predicted to meander over the eastern portions of North or South Carolina at days 4 and 5. The ECMWF has trended slower this cycle at days 4 and 5, and as a result the NHC forecast shows slightly less motion at those time periods. The spread in the guidance increases by 72 hours, with the GFS and its ensemble mean along the right side of the guidance, while the ECMWF remains along the left edge. It should be noted that there are still a number of ECMWF members that are even farther left. The NHC track forecast has been nudged to the left and is close to the TVCN consensus aid. Given the amount of uncertainty by day 3, it is important not to focus on the exact forecast track as average NHC errors at days 3, 4, and 5 are about 100, 140 and 180 n mi, respectively, and dangerous hazards
will extend well away from the center. Storm Surge and Hurricane watches have been issued for a portion of the coast of South and North Carolina. Additional watches may be required later today.

1. A life-threatening storm surge is likely along portions of the coastlines of South Carolina, North Carolina, and Virginia, and a Storm Surge Watch has been issued for a portion of this area. All interests from South Carolina into the mid-Atlantic region should ensure they have their hurricane plan in place and follow any advice given by local officials.

2. Life-threatening freshwater flooding is likely from a prolonged and exceptionally heavy rainfall event, which may extend inland over the Carolinas and Mid Atlantic for hundreds of miles as Florence is expected to slow down as it approaches the coast and moves inland.

3. Damaging hurricane-force winds are likely along portions of the coasts of South Carolina and North Carolina, and a Hurricane Watch has been issued for a part of this area. Damaging winds could also spread well inland into portions of the Carolinas and Virginia.

4. Large swells affecting Bermuda and portions of the U.S. East Coast will continue this week, resulting in life-threatening surf and rip currents. 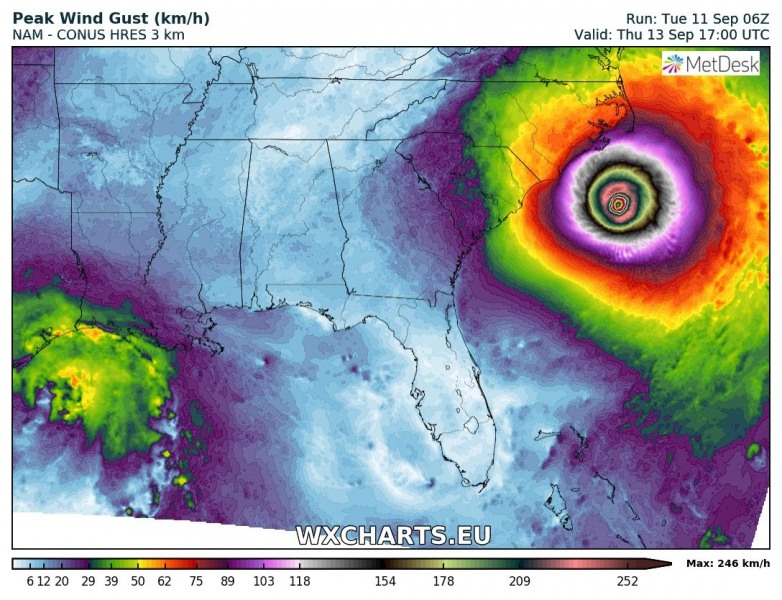 The tropical Atlantic ocean is quite active this week, as three tropical systems are on going – in addition to Florence, there are also the major hurricane Helene and Tropical Storm Isaac. Isaac will bring some threat into Lesser Antilles while Helene will not bring any threat soon, but may affect Azores later this weekend with much weakened strength than it currently has. 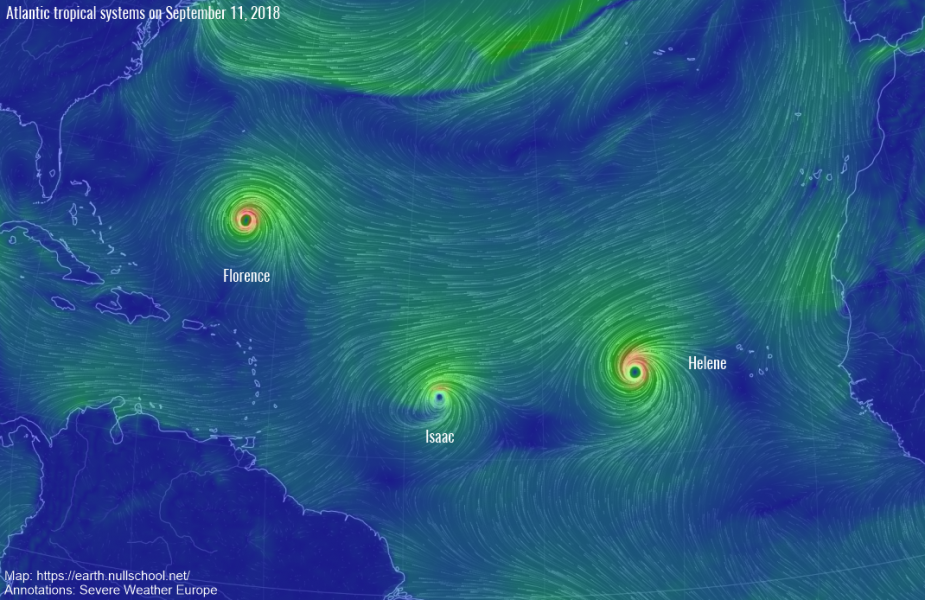 Stay tuned for further updates on the hurricane Florence soon.