Hagibis underwent explosive strengthening yesterday and earlier today, from a tropical storm to equivalent-CAT4 super typhoon – a 145 km/h increase in peak sustained winds – in only 18 hours! 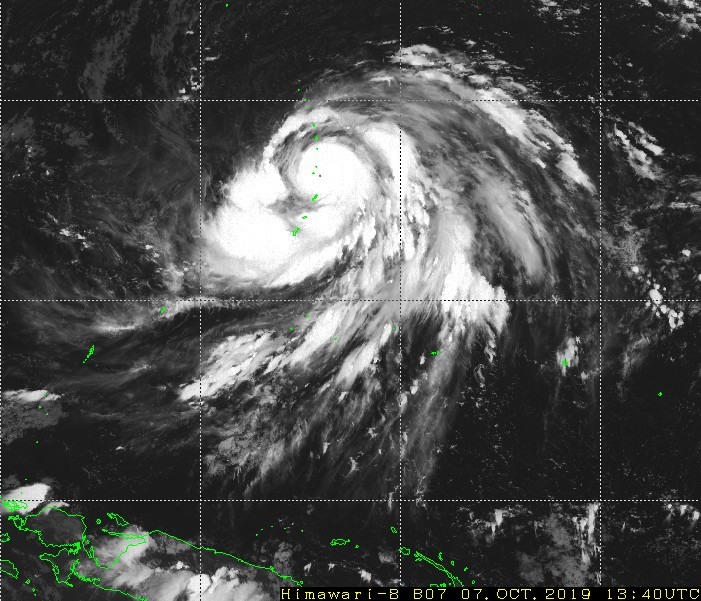 The satellite appearance of typhoon #Hagibis is phenomenal and will likely improve after an expected EWRC which will likely occur within 24 hours. Based on satellite alone I wouldn’t be shocked if this thing was at 150-155 kts in the next advisory. pic.twitter.com/AhM6QHeffK

Wow, really insane vertical structure to detect such high dBz from so far away! Might be 2-3 mile diameter ‘eye’! Super intense #Hagibis pic.twitter.com/Qb2jZLGHhx

Latest satellite and radar imagery indicates the tight, pinhole eye is only about ~6-10 km across!

Well this is something else. It is dubious to measure #Hagibis‘s eye size with radar bins this wide, but it’s darn small. This is at a beam height of ~29,000 feet, which means the eye is likely a touch smaller at its base, since eyewalls slope outward with height. pic.twitter.com/WBBtrvuoLp

The exceptionally small, tight eye is reminiscent of extreme hurricane Patricia in 2015 – the record holder for the strongest sustained winds for a tropical cyclone, at 345 km/h (215 mph). The extremely tight eye of Hagibis suggests peak sustained winds may be higher than currently estimated.

Super typhoon Hagibis tracked over the northern Marianas and is now moving towards southern Japan.