After putting one of the most phenomenal displays of rapid intensification in tropical cyclone history yesterday (Note: Hagibis intensified from a tropical storm with 60 mph winds to a Category 5 super typhoon with 160 mph winds in the 24 hours ending at 8 am EDT Monday. A 100 mph increase in maximum sustained winds in just 24 hours is an extremely rare occurrence of rapid intensification), the Super Typhoon Hagibis continues moving WNW towards Japan. It maintains a powerful 135-140 knots winds – a Category 5 strength! The inner eyewall has, however, still not collapsed completely, but should soon be replaced by a larger, outer eyewall. 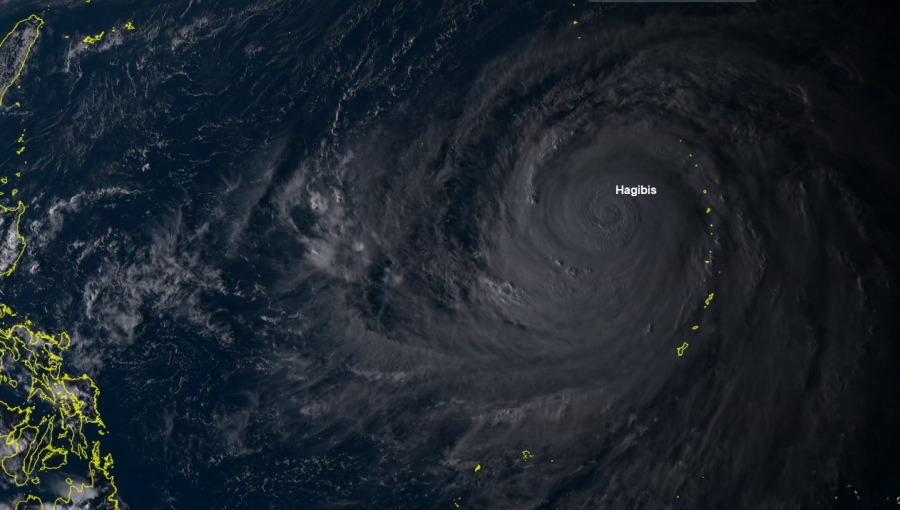 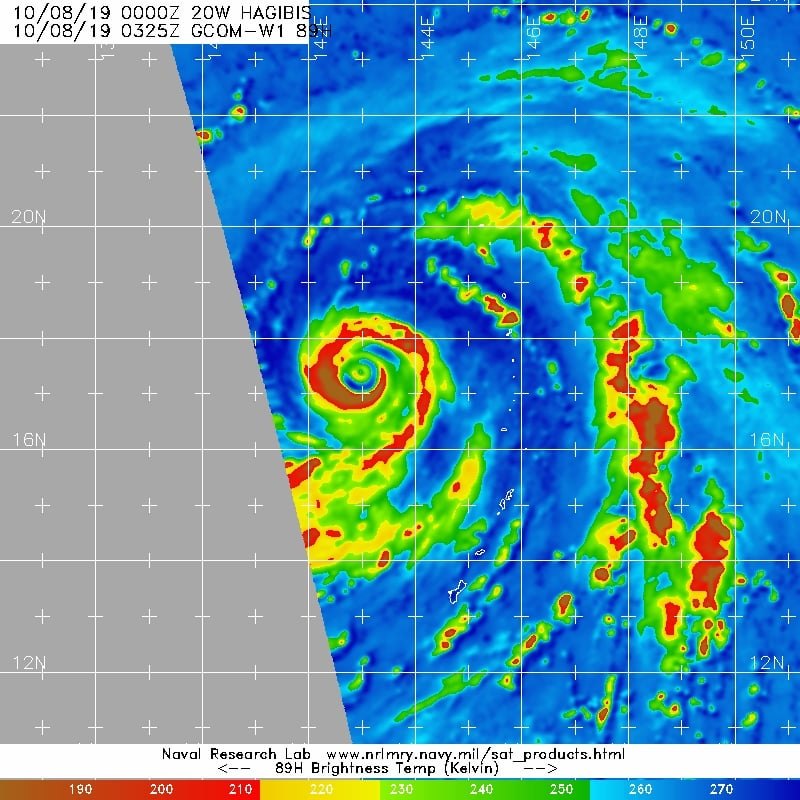 #Typhoon #HAGIBIS has been evolving overnight, looking like cinnabun, then half moon, but ever a healthy cyclone. Inner eyewall has now almost totally disintegrated, & huge muppet eye is about to emerge. Crazy to go from pinhole to this. Classic ERC (eyewall replacement cycle). pic.twitter.com/UH16ff4Vpb

With a central pressure of 915 hPa, #Hagibis is just 5 hPa away from surpassing #Dorian as 2019's strongest storm.

Major wind and rain impacts are expected across #Japan this weekend … not ideal with #RWC2019 ongoing. https://t.co/bVb4j6B9SF pic.twitter.com/lyv3BBdXIt

Advance Dvorak technique analysis confirms the expected fluctuations in intensity due to an ERC has resulted in some weakening, indicating the peak strength has probably been reached in the past 24 hours. Hagibis is now packing winds of around 135 knots (= 250 km/h) and estimated central pressure around 920 mbar, a high-end Category 4 strength.

Hagibis should maintain a strong Category 4 or even Category 5 strength for another day or two before it begins its weakening trends while moving towards Japan. It continues moving across the very favorable warm waters of the western Pacific – literally ideal conditions for maintaining its powerful strength. The wind shear affecting Hagibis should remain very low while sea surface temperatures will remain around 29°C with the environment becoming slightly drier. As usual, there will likely be fluctuations in typhoon’s strength due to additional eyewall replacement cycles while moving through the still high-end favorable environment. and in addition, Hagibis’s wind field will begin spreading the wind energy over a broader area with time.

The future track of Hagibis indicates that models are in rather good agreement it will be moving within the classic curvature out, arcing toward the northwest and then north towards Japan’s islands Honshu. The potential is increasing that landfall should occur near the capital Tokyo early Sunday, as a Category 2 or similar strength. Indeed, still several days before this happens, so its track might change.

The last 4 ECMWF ensemble runs for #Hagibis show a trend towards more recurvature but still a risk to land. However, with a bit of luck the strongest winds will be pushing out to the right of the track so wind risk *could* be dropping for southern Japan. pic.twitter.com/MKIiItL64Q