Expect major torrential rainfall in parts of Greece today and over the first half of Wednesday as the frontal system on the cutoff low over the central Mediterranean slowly moves through. Extreme amounts of rainfall are expected: locally up to 150-250 mm in 24 hours!

The cutoff low over the central Mediterranean, which affected southern Italy on Monday, is slowly drifting eastwards towards eastern Mediterranean. It will affect Greece with torrential rainfall and advect large amounts of Saharan dust into the region. 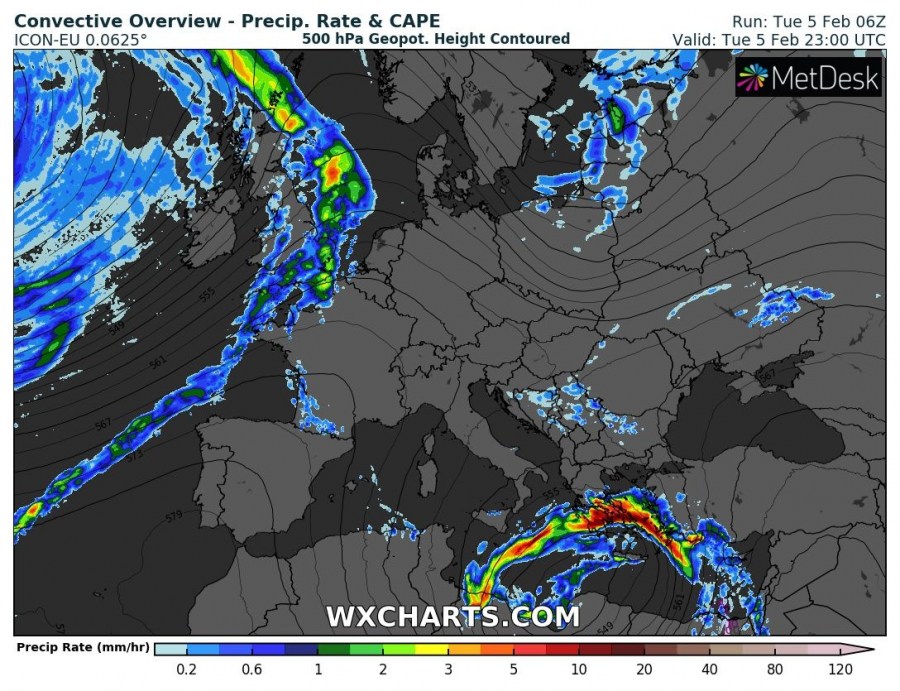 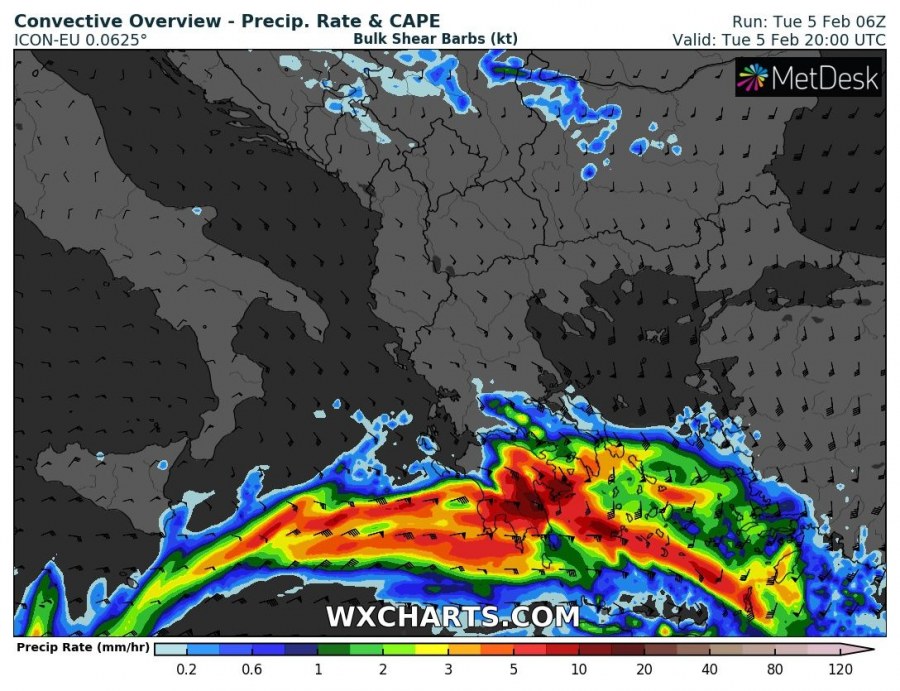 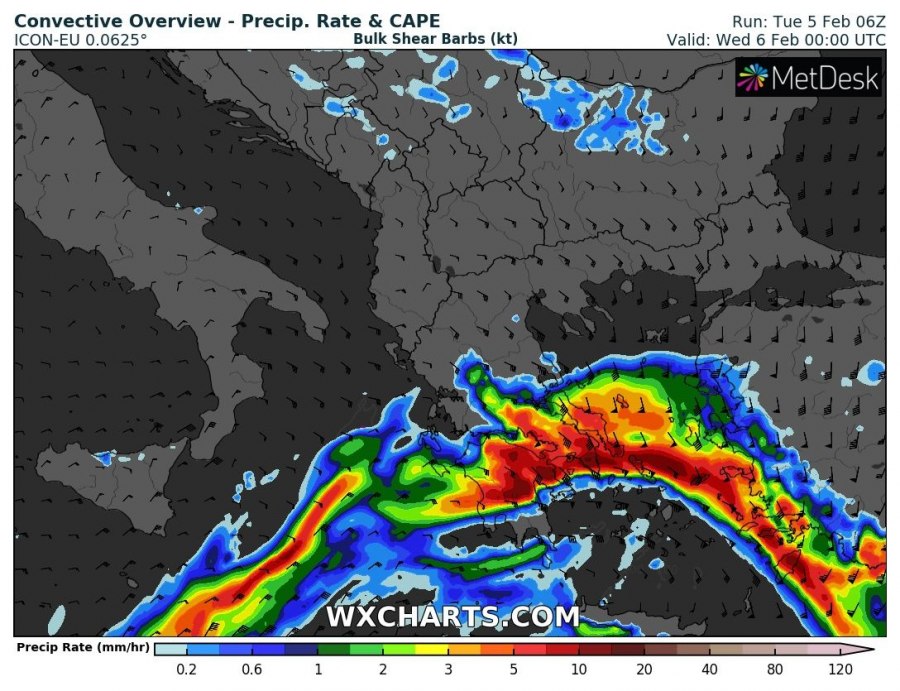 Prefrontal orographic rainfall will be affecting particularly the eastern part of the Peloponnese from the late morning onward. The slowly eastward moving frontal boundary will produce a long QLCS (Quasi-Linear Convective System) which will be carrying successive training, potentially severe thunderstorms across the Aegean region into southern Greece from the late afternoon into the evening hours. While the frontal line will be moving eastward rather slowly, the N-NW storm motion within the line will be rapid. 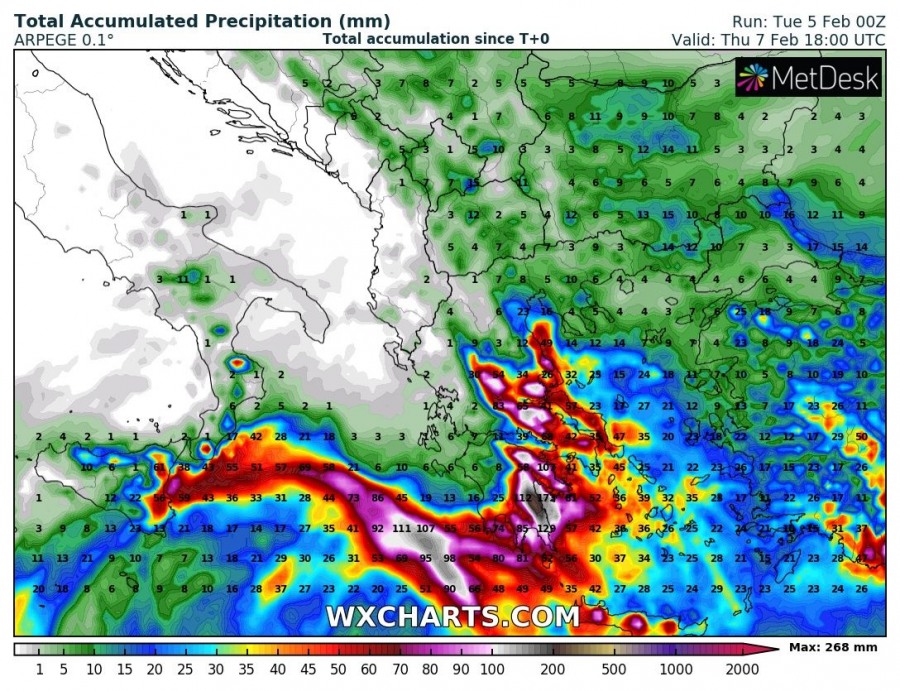 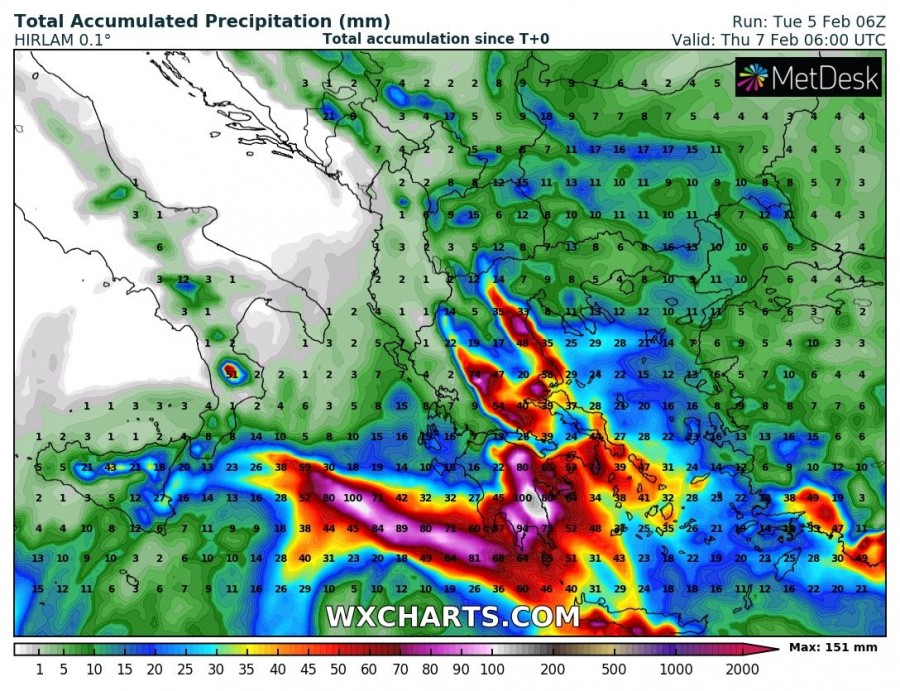 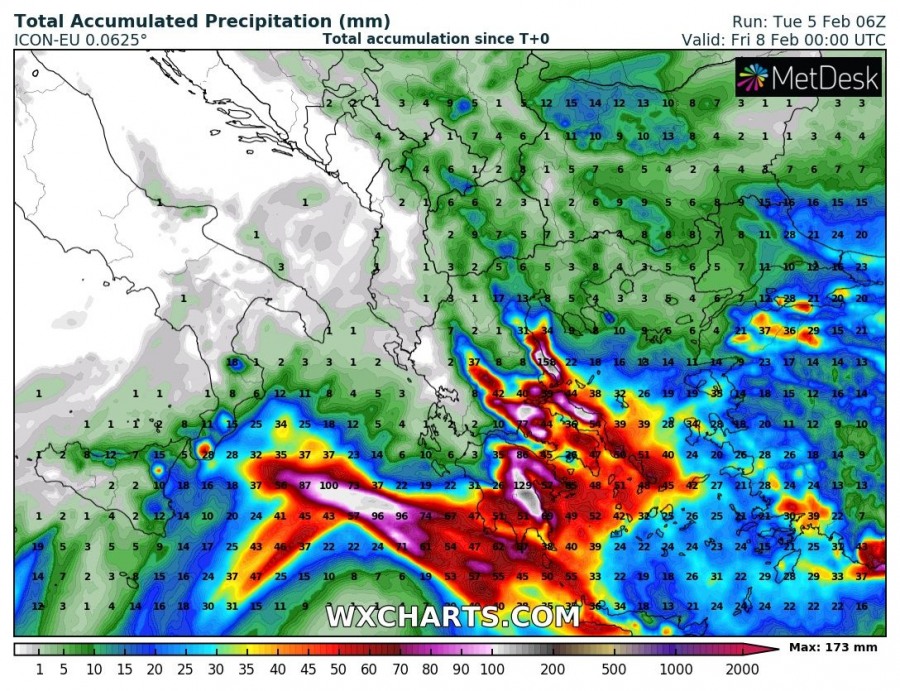 Tornado threat will be enhanced along the sharp frontal boundary. Models indicate moderate instability buildup along the front across the Sea of Crete, Crete Island and to its south as well as further east to Rhodes Island. Instability will be maximized to the west, where up to 600-1200 J/kg MLCAPE is indicated, dropping off gradually to 400-500 J/kg near Rhodes Island and towards the SW coast of Turkey. The area will be under the exit region of a strong, 70 kt 500 mbar level southeasterly jet, providing strong upper level forcing. Strong backing easterly surface winds will provide sufficient veering and up to 40-70 kt deep-layer shear. Expect embedded supercells within the convective line, capable of producing mesocyclonic waterspouts and tornadoes. Marginally large hail will also be possible with these storms. 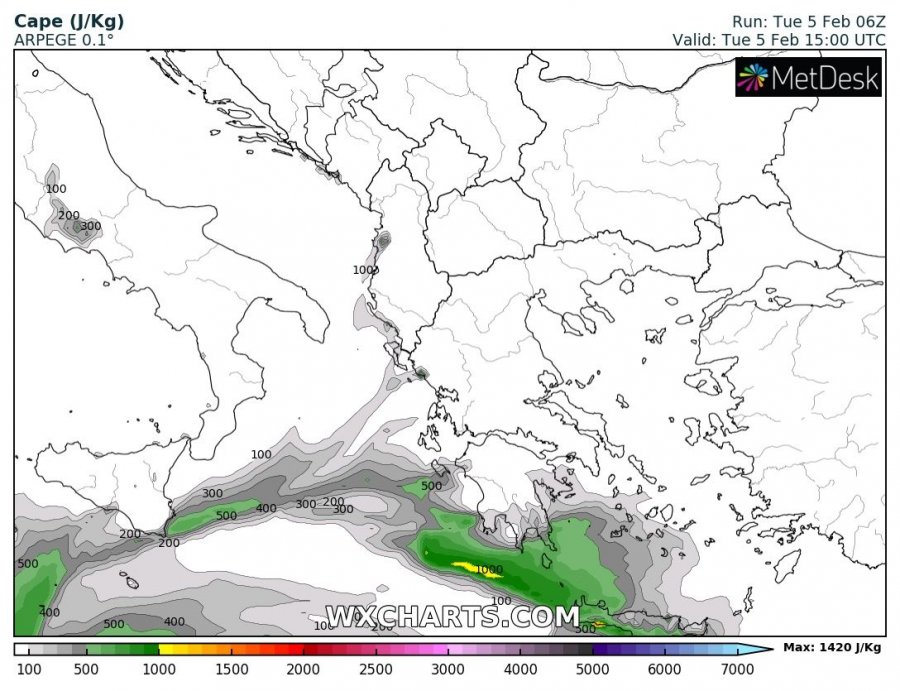 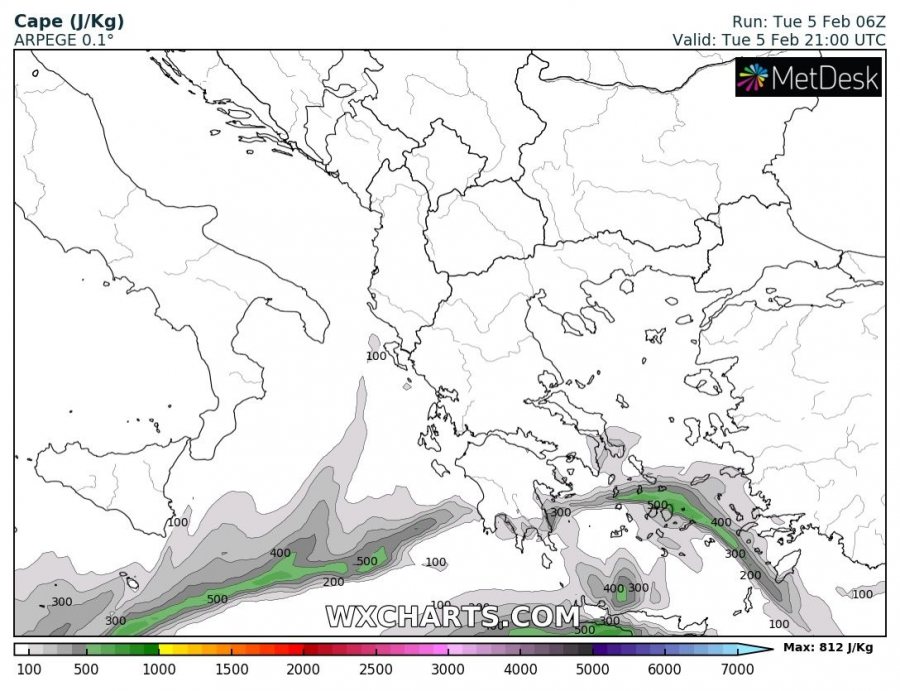 Instability across the region. Maximum instability is along the frontal boundary. ARPEGE model guidance. Map: Wxcharts.eu.

Also expect waterspouts across most of the southern Aegean sea and the Sea of Crete on Wednesday and Thursday behind the front, as the cold core upper low moves over the region.

A smaller region between Karpathos Island, Greece and the SW coast of Turkey – including Rhodes Island – will get a strong pre-frontal windstorm on Tuesday afternoon and evening. Strong easterly to southeasterly winds will form a low level jet in the region, gusting up to 90-120 km/h. Peak winds are expected between Rhodes Island and mainland Turkey. 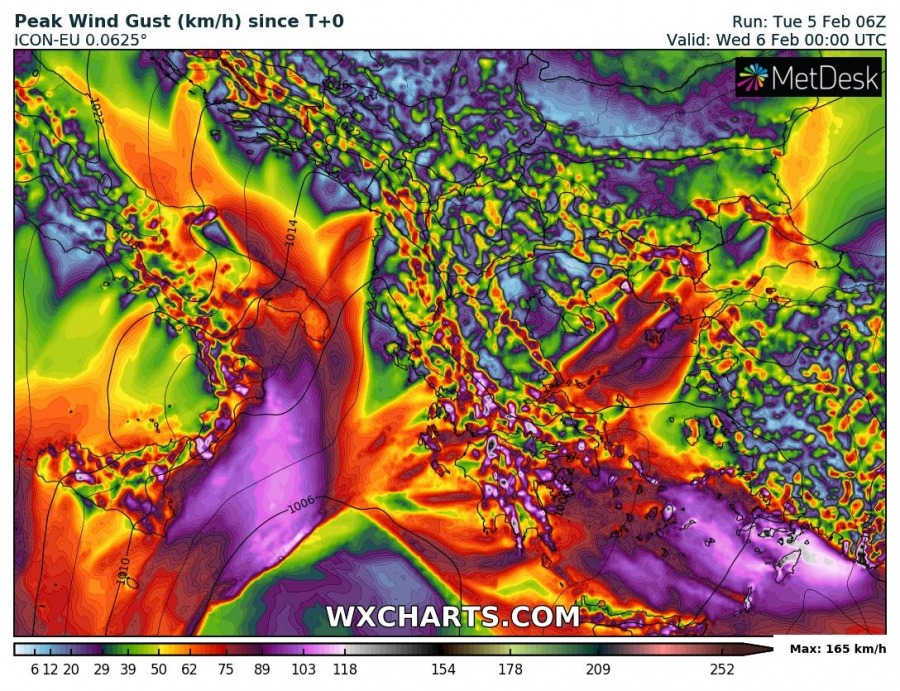