A rare and unusually powerful surface cyclone and frontal system hit the Middle East on Thursday afternoon, delivering torrential rain, destructive winds, and sandstorms. The event is occurring over Egypt, Israel, and other surrounding countries. According to local news media, the system also led to many power outages, car accidents, road closures and collapsed structures. The Luxor International Airport was closed, train service suspended and also the seaports in Alexandria, Sharm el-Sheikh and Hurghada. Conditions are now improving as the system is ejecting northeast, but flooding continues.

Thunderstorms packing heavy rains and lightning caused widespread flooding across Egypt on Thursday, killing at least five people. Authorities shut down Luxor International Airport, a key hub for tourists, and three seaports — the Mediterranean port of Alexandria and the Red Sea ports of Sharm el-Sheikh and Hurghada. Nile River cruises between the southern cities of Luxor and Aswan, which harbor most of ancient Egypt’s monuments, were suspended and several key highways were closed.

Satellite imagery this morning, March 13th, reveals an impressive frontal system of this rare cyclone. There is also a lot of Saharan dust advected into northern Saudi Arabia visible: 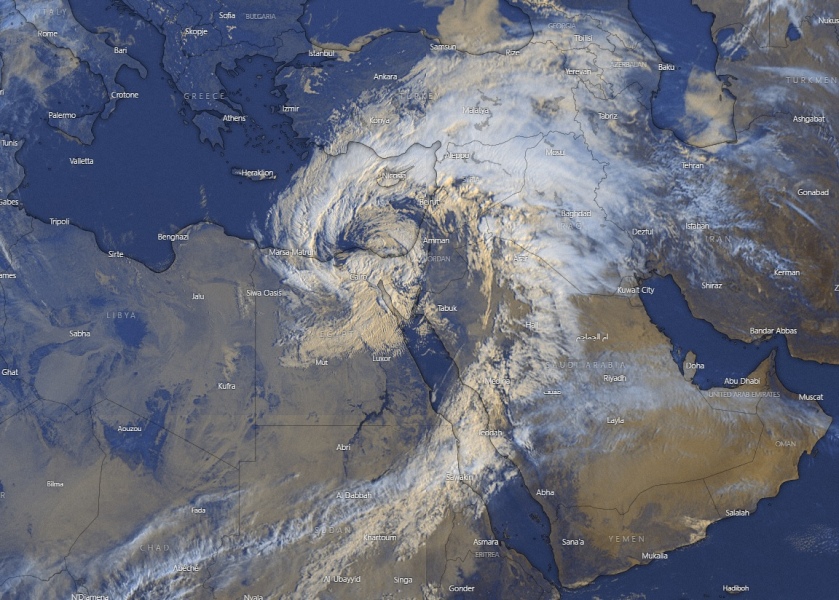 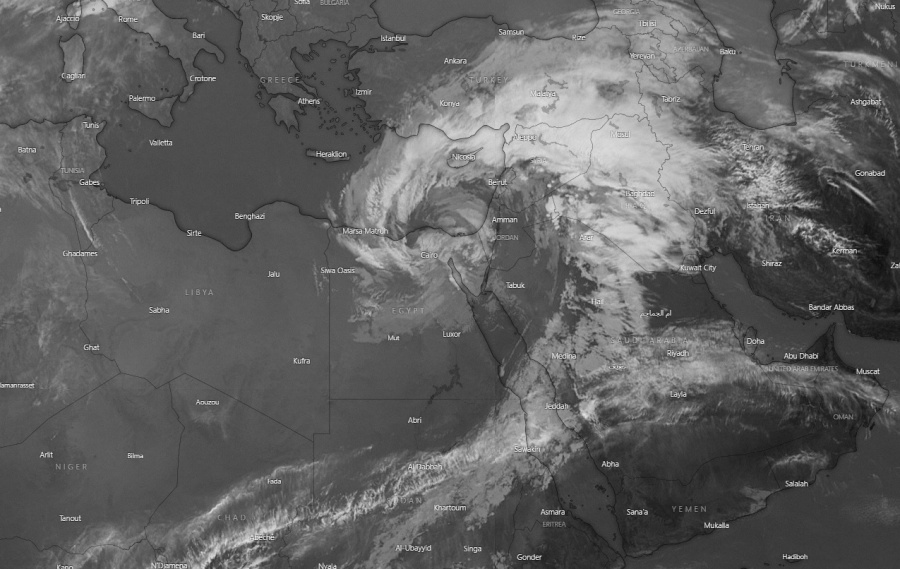 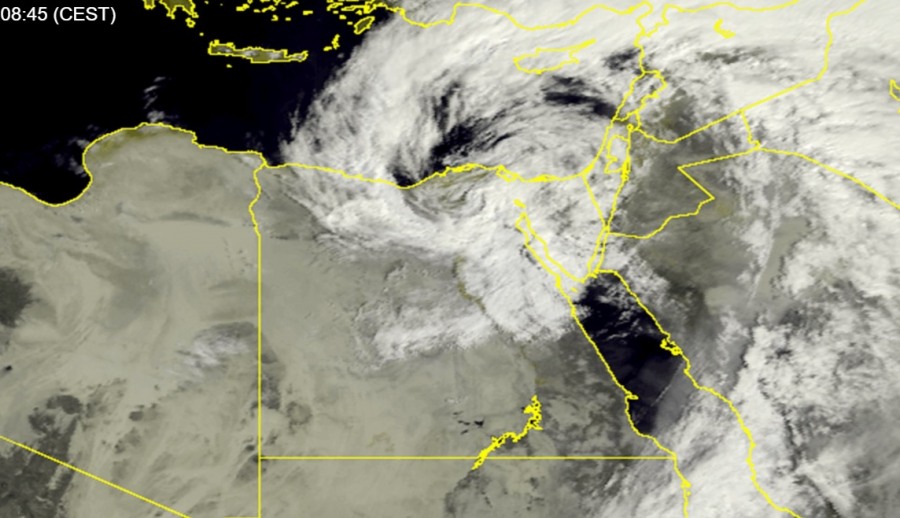 Closer view of the cyclone’s core: 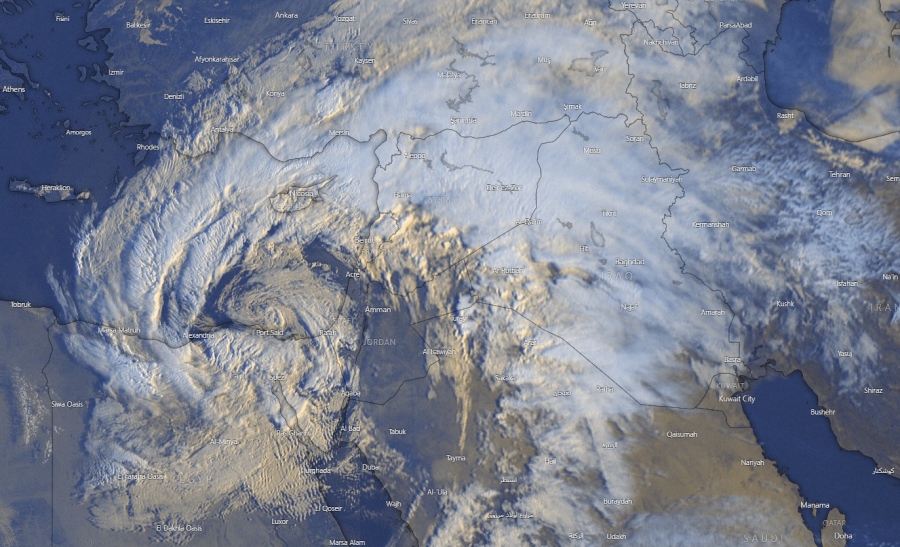 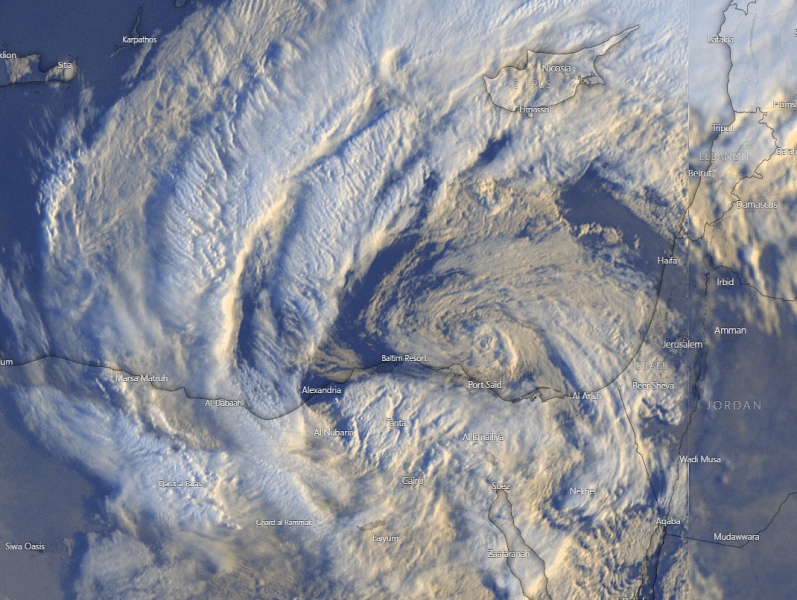 There was quite a lot of severe storms, lightning activity map: 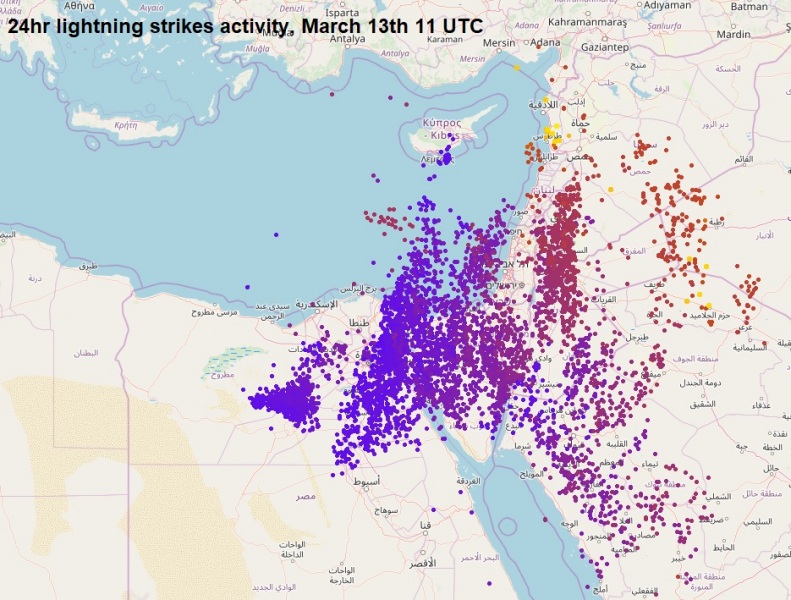 The country’s railway authorities suspended train service nationwide, citing the bad weather. The announcement came shortly after two Cairo-bound trains collided near their final destination, injuring 13 people, according to health officials. Railroad officials later said in a statement the collision was due to a signal system error caused by the bad weather.

A child died and five people were injured when floods demolished their houses in a rural area in the southern province of Qena, where lightning-ignited several fires. Also in Qena, a motorist was killed when winds blew his car into a canal.
In western New Valley province, a technician was electrocuted while trying to fix a lighting column that went off due to the rain, local officials said.
In southern Sohag province, a 35-year-old bystander died under the rubble of a wall that was knocked down by the wind.
A 60-year-old man was electrocuted as he walked down the street in his village in the Delta province of Menoufeya.

Officials earlier in the week announced that schools would be closed and suspended work in businesses and government offices after forecasters warned of heavy rains and flooding across much of the country through Saturday.

Here are a couple of reports of flooding across Cairo and some other areas:

Good decision by the government of Egypt to have a public holiday today. The road infrastructure is great, but like everywhere across the MENA region, it's not built for heavy rain and so has minor drainage. It's a catching up with my reading day in Cairo pic.twitter.com/Q55zVZCRLu