Extreme warmth across Iceland verified this weekend – eastern parts peaked up to around 18 °C, Nov 17-18th

The pattern during the past days has been an exceptional across the northern Europe and Arctic region. A very powerful upper ridge developed and brought an extreme warmth very far north across the northern Atlantic, Iceland and also Greenland. Northern Iceland has seen the most extreme warmth as a pronounced Foehn effect has pushes afternoon temperature into 17-18 °C range both on Saturday and Sunday, Nov 17th & 18th.

The pattern was dominated by a very powerful upper ridge and high pressure system across the northern Europe, while a deep trough / cyclone was located over the northern Atlantic and resulting in strong warm airmass advection towards the Arctic region. Strong south-southeasterly low-level winds across Iceland usually result in downslope flow across the northern half of the island where a significant Foehn effect winds develop in the narrow fjords. Together with severe winds, airmass warms up into the range well above normal.

Extreme warmth for Iceland and Greenland this weekend, Nov 16-18th

Both Saturday and Sunday brought extreme afternoon temperatures, meteorological station Skjaldthingsstadir in the eastern Iceland reached +17.4 °C on Saturday and +17.8 °C on Sunday! Airport Akureyri in the northern Iceland peaked at 15.0 °C on both days! 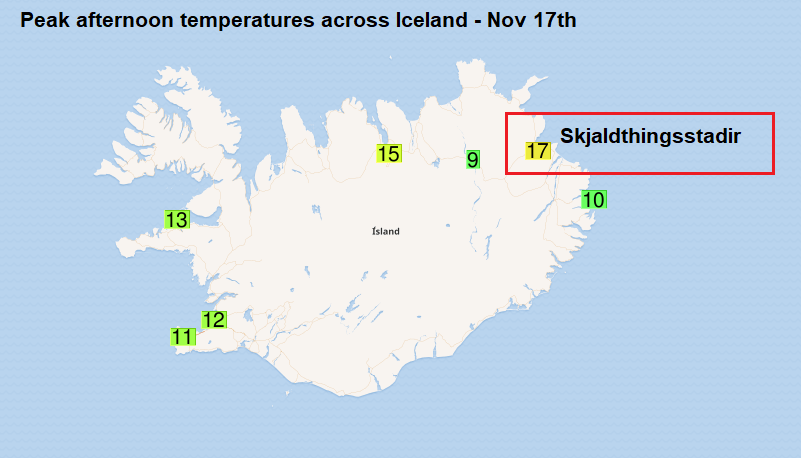 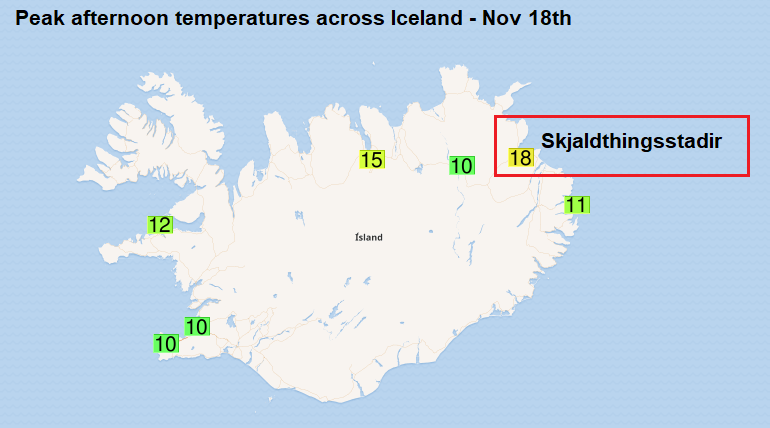 Table view of peak afternoon temperatures over the weekend:

Besides the very warm days, extremely severe were also reported. Some elevated stations and those in the narrow fjords has peaked into 40-50 m/s (150-180 km/h).

Intense rainfall expected locally in some parts of Spain over the next 3 days, local flooding likely
← Previous
Excessive rainfall and enhanced threat for flooding across central Italy and SW Balkan peninsula, Nov 20-22nd
Next →
Comments are closed.