The pattern is in place for persistent torrential rainfall across parts of the central Mediterranean, including central Italy and southwestern Balkans over the next 48-72 hours. Major flooding possible!

The pattern across Europe is dominated by a deep low pressure area across much of western and southwestern Europe with a dominant cutoff low over France and a deep longwave trough extending into the Iberian peninsula, western Mediterranean and Algeria. The system produces strong low level southerly to southwesterly, advecting very warm and moist airmass into central and northern Mediterranean. 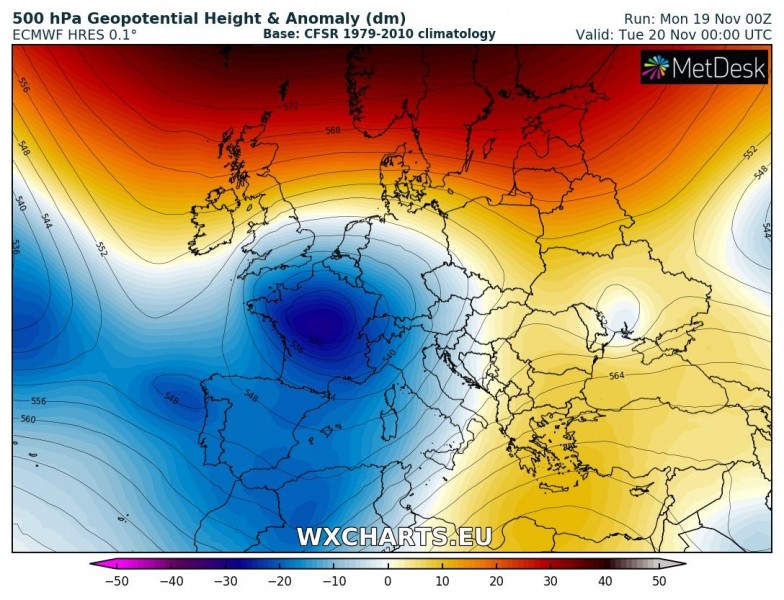 Strong southerly and southwesterly flow will be encountering the Dinaric mountain range producing strong and very persistent orographic rainfall, locally enhanced by convective rainfall. Thunderstorms are expected along most of the coast of the central and southern Adriatic sea, parts of southern Italy along the coast of the Ionian sea and to a somewhat lesser extent along the eastern coast of the Tyrrhenian sea in central and southern Italy. Up to 1000-1200 J/kg, locally up to 1500 J/kg MLCAPE will develop. The main threat with these storms will be torrential rainfall, however, severe straight line winds and large hail are expected as well. Tornadoes are also possible.

The most intense precipitation is expected along the coast of the central and southern Adriatic sea and northern Ionian sea. Expect up to 300-350 mm of rainfall in the next 48-72 hours in extreme southern Croatia, Montenegro and parts of northern and southern Albania, possibly also extreme NE Greece. Expect locally major flooding where these large totals verify.

Intense ranifall is also expected in southern Tuscany, Lazio and Campania. Rainfall totals up to 100-150 mm are expected locally. Some flooding is expected. Sardinia will also see a lot of rainfall, locally approaching 100 mm in the next 48-72 hours.