The 7.4 magnitude earthquake hit the southern coastline of the country of Mexico this morning local time, Tuesday, June 23rd, 2020. It was felt from the capital Mexico city as well, 400 miles away.

The epicenter was near the town of Coyul, 31 km (approx. 20 miles) from the city of San Miguel del Puerto, Oaxaca, Mexico at 10:28 am local time (15:29 UTC or 17:29 central European time). It was a quite shallow quake, only 26 km below the earth’s surface, which would have amplified the shaking. 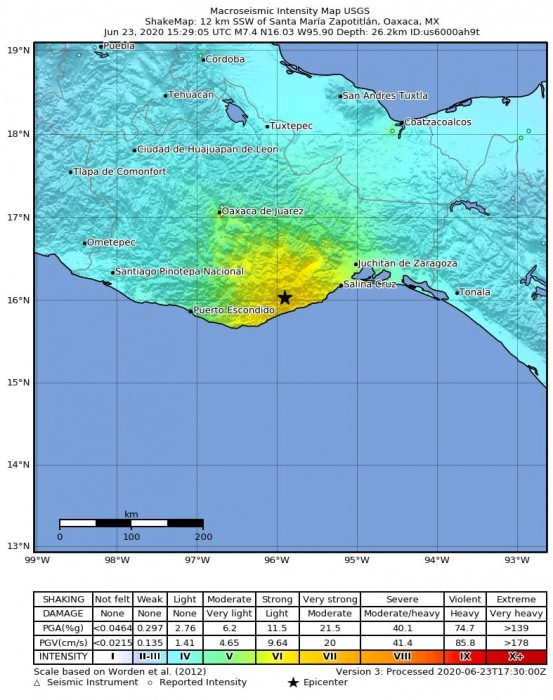 The earthquake was also felt in Guatemala. The U.S. Geologic Survey
(USGS) estimated that some 2 million people felt strong or moderate shaking and another 49 million felt weak or light shaking.

Structural damage has been reported from the Oaxaca, but so far no significant damage, injuries or fatalities.

There was also a tsunami warning in effect, issued by The Pacific Tsunami Warning Center (PTWC). It covers a radius of 1,000 km (approx. 600 miles) from the epicenter, on the Pacific coasts of Mexico and Central America. Warning Includes Mexico, Guatemala, El Salvador, and Honduras.

Here are some live videos of the significant shockwaves in various parts of Mexico:

Earthquakes of such intensity can be devastating. A similar quake with magnitude 7.1 struck central Mexico 3 years ago. It killed 355 people in the capital and the surrounding states.

Mexico is situated at the intersection of three tectonic plates and is one of the most earthquake-prone countries in the world.

Three months ago there was also a M5.3 earthquake in Croatia, a significant damage occurred in the capital Zagreb: