Widespread severe thunderstorms including supercells with a threat for severe winds, tornadoes, large hail, and torrential rainfall with flash floods are expected across the western Balkans and along the eastern Adriatic Sea on Tuesday. 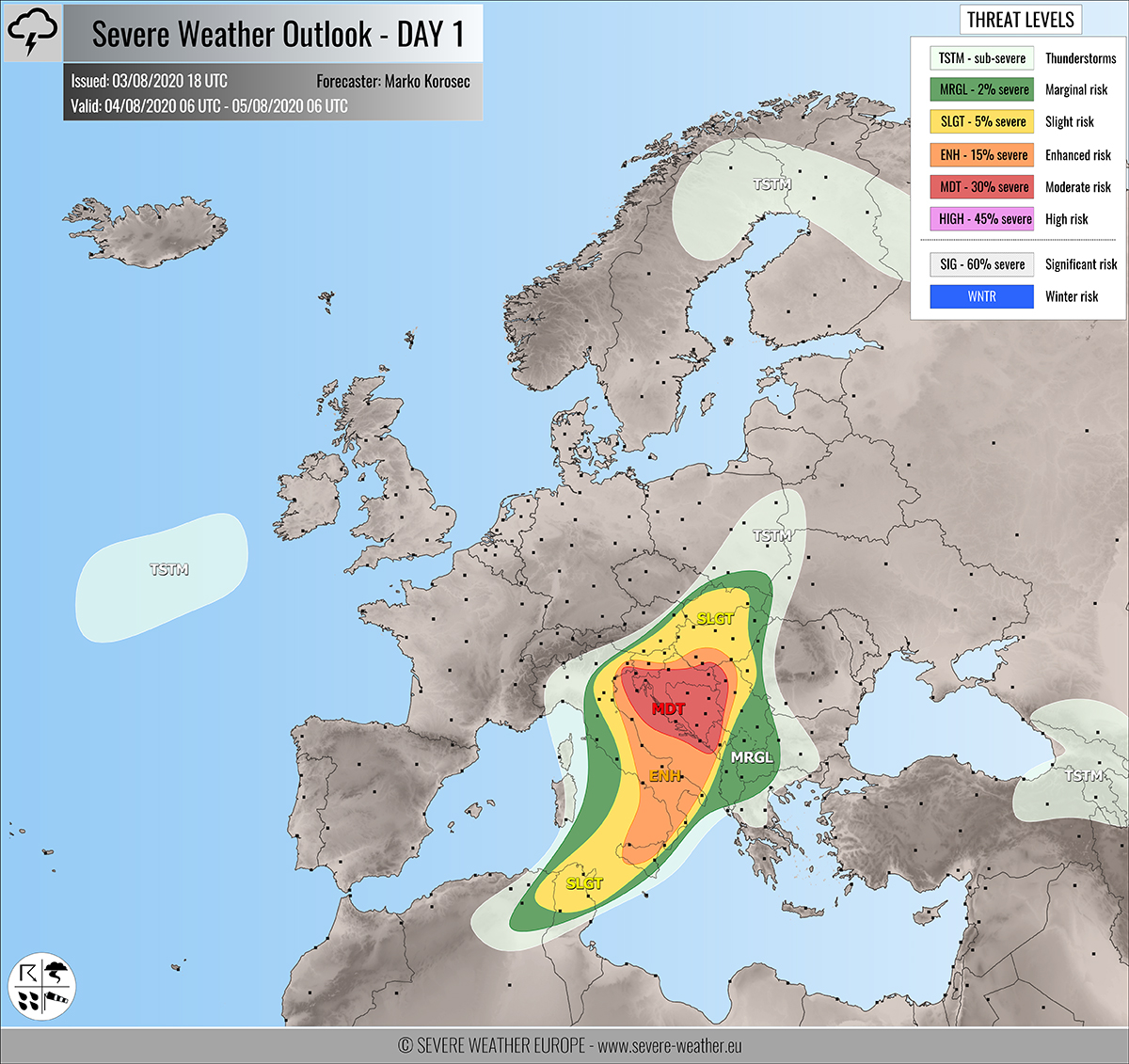 An upper trough over North Mediterranean has become an upper low, moving across Italy into the Adriatic Sea. An upper ridge develops into southwestern Europe, while the ridge over southeast Europe continues strengthening and expanding into western Russia. At the surface, a weakening front extends from Poland into the Balkans. A surface low is moving south over the Adriatic Sea. 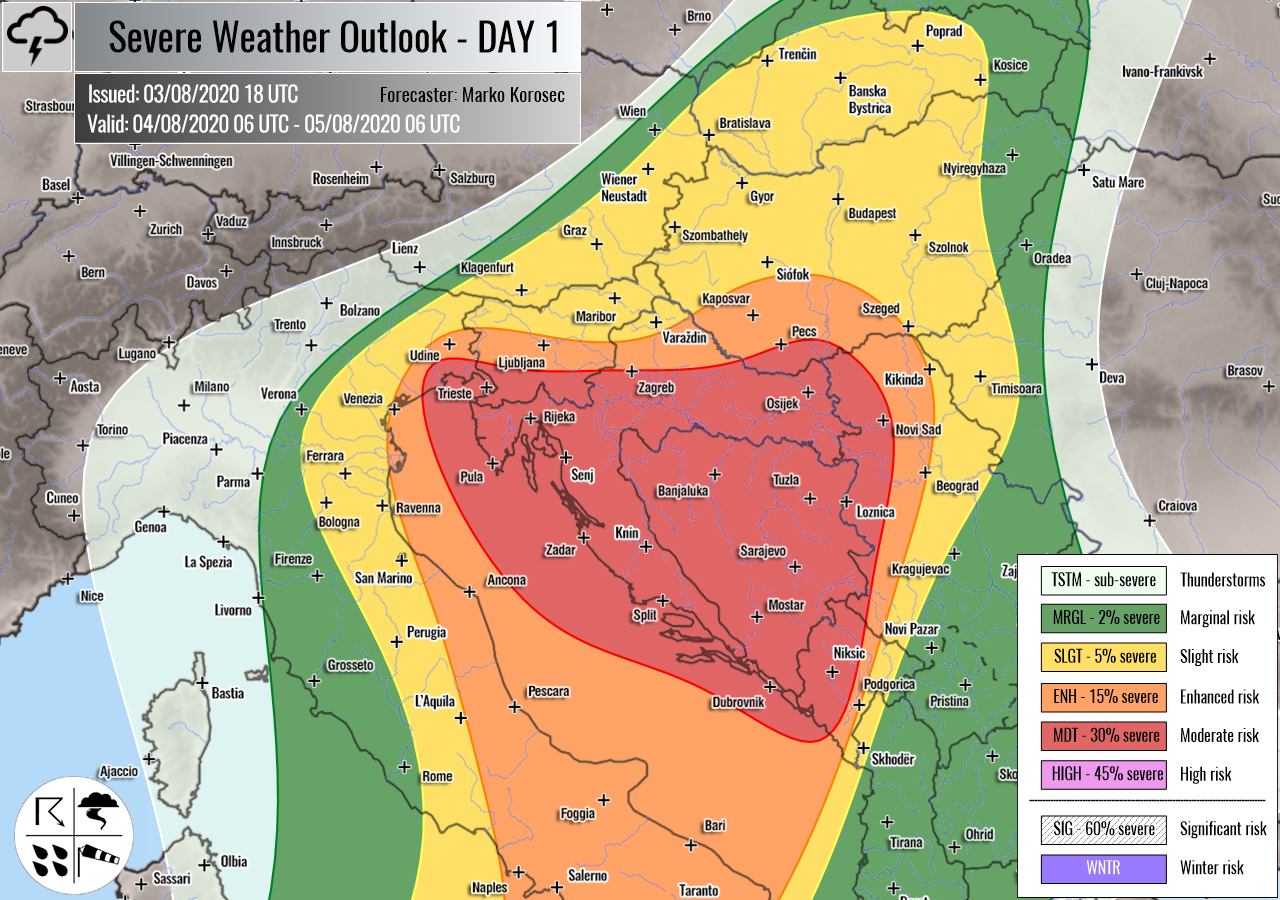 ENH/SLGT risks have been issued for areas surrounding the MDT risk area including south-central Italy, Hungary, south Austria, and Slovakia with a threat for severe winds, large hail, and torrential rainfall.

Widespread organized severe storms are expected to develop along with the southeastward drifting upper low from north Italy into the Adriatic Sea.

An extremely unstable air mass is present across the Adriatic Sea, with more than 3000 J/kg of MLCAPE available, decaying inland into western Balkans. The region is overspread with a moderately strong deep-layer shear of around 40-50 knots. The environment is therefore conducive for quite a robust storm activity and dangerous severe storms.

Supercells are expected and a few intense storms are likely to develop. The main threat will be very intense rainfall, producing flash floods especially along the complex terrain of western Balkans and along with the eastern Adriatic Sea. Storms will likely maintain over the same areas for a longer time, so flooding could become a serious issue locally. MDT risk has been extended into SSW Slovenia and NNW Croatia mainly for the excessive rainfall threat in the morning hours.

The most robust storms are likely to bring large hail and severe winds as well. Strong southeasterly low-level flow along the Adriatic should be also conducive for tornadic potential especially if storms could remain discrete from the overall widespread activity.

Another area for severe storms to develop is to the east of the Dynaric mountain range across eastern Croatia, northern Bosnia, and western Serbia where the activity is strongly dependant on the amount of heating in the morning hours. Strong instability may develop and support a few supercells with large hail and sever wins threat.

Storms will have a tendency to merge into large clusters or a MCS from the afternoon into evening hours across the western Balkans.

+++ north Tunisia into the south Mediterranean +++ 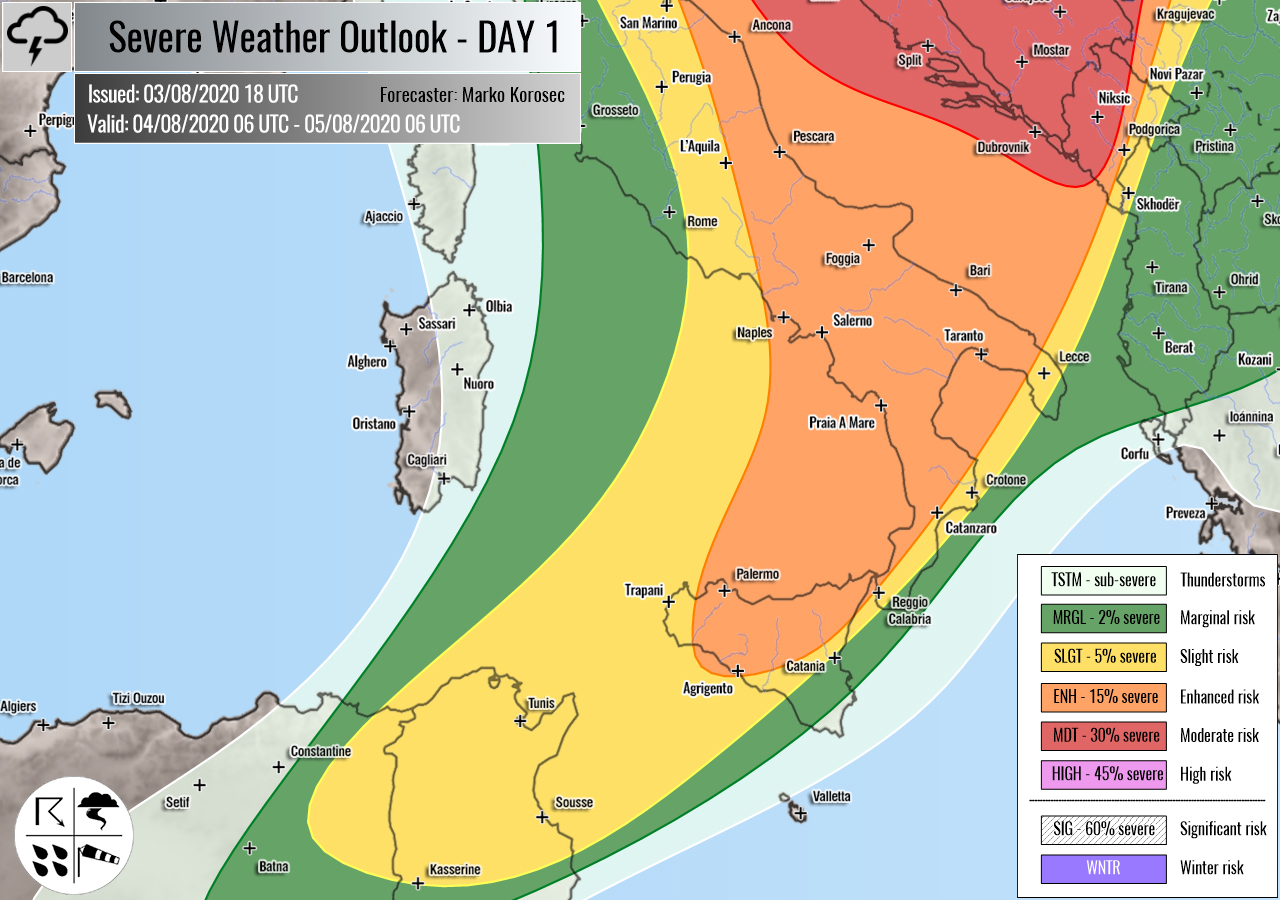 SLGT risk has been issued for north Tunisia into the south Mediterranean with isolated threat for severe storms, capable of producing severe winds and large hail. A moderate deep-layer shear and instability could support a few supercells.

TSTM risk areas have been placed across northern Scandinavia, northeast Turkey, and Georgia where some storms are likely to occur but should remain sub-severe.