Severe thunderstorms including intense supercells with a threat for severe winds, tornadoes, large hail, and torrential rainfall with flash floods are likely across north Italy, western Slovenia, and northwest Croatia on Monday. 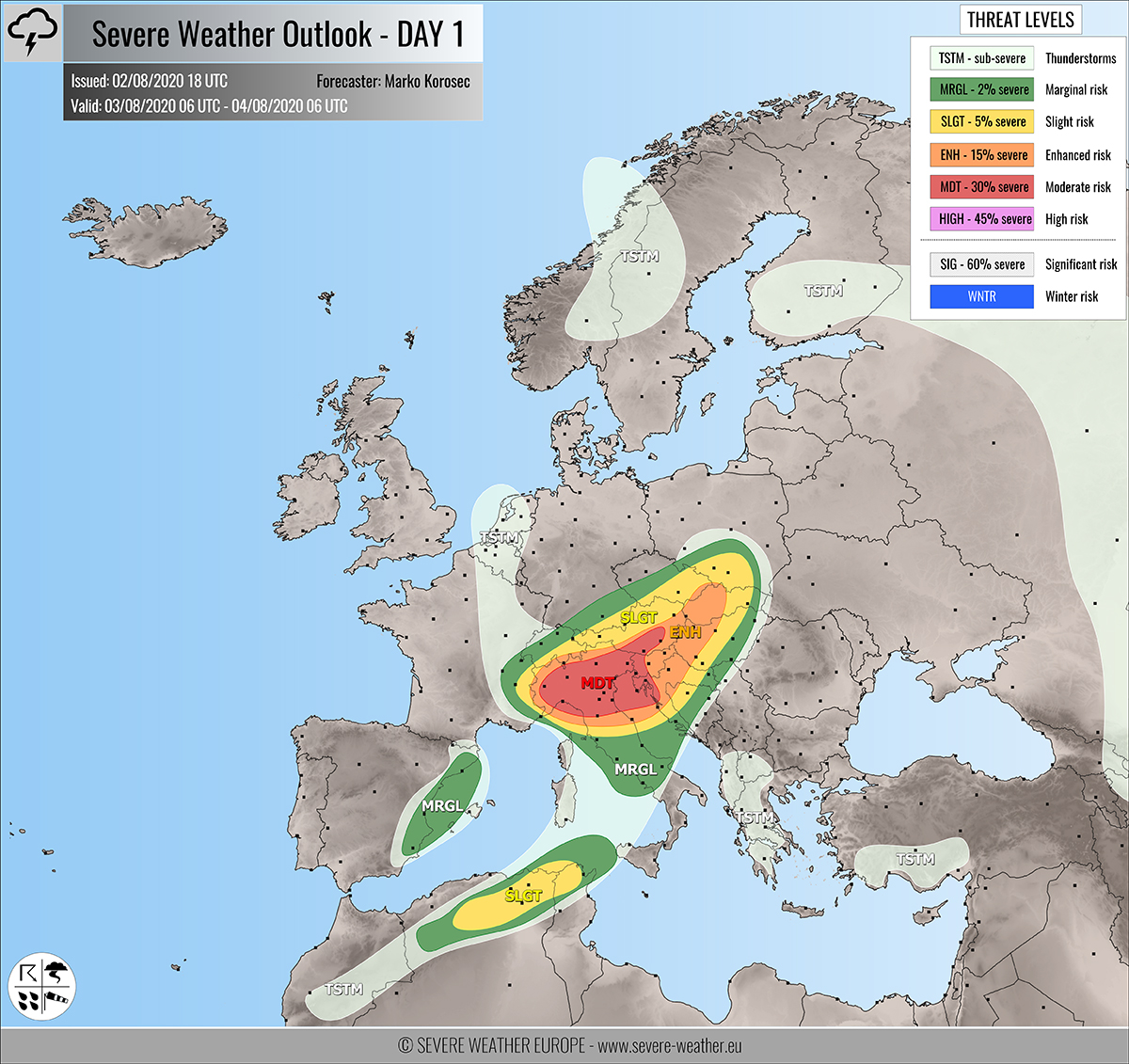 A progressive pattern has developed over Europe. A large long-wave trough is deepening while moving towards south-central Europe. An upper ridge strengthens across southeast Europe in western Russia. At the surface, a frontal boundary is extending from central Scandinavia towards the Alps. A surface depression forms over northern Italy. 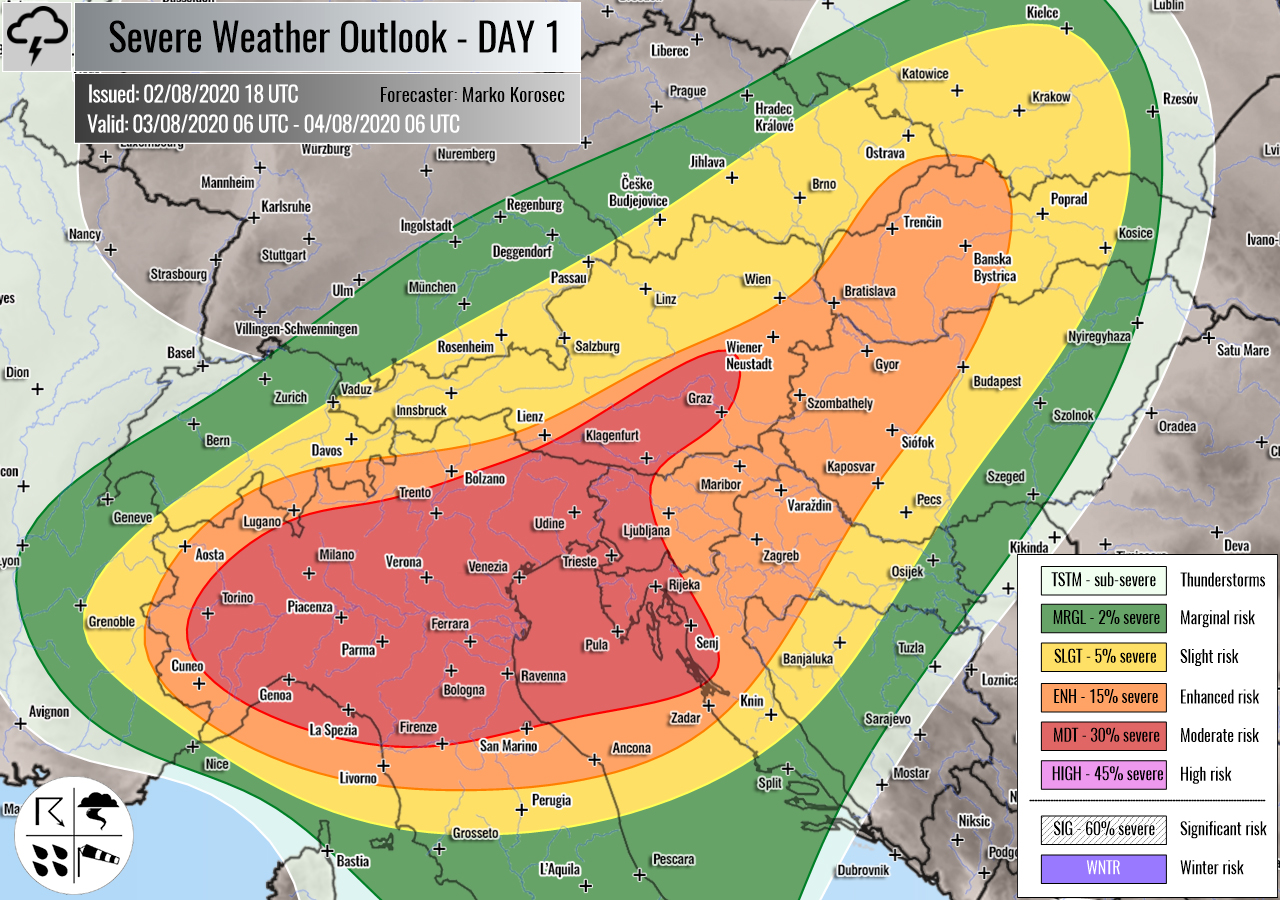 ENH/SLGT risks have been issued for areas surrounding the MDT risk area including the Alpine and north Adriatic regions and northern Balkan peninsula. A threat for severe winds, large hail, and torrential rainfall will develop.

A scattered to widespread organized severe storms are expected to develop along with the moving frontal wave from west to east. The environmental conditions are supportive of the rapid development of the storms all day. The afternoon evolution is strongly dependant on the overnight activity as a large cluster of severe storms will already be possible in the morning hours.

A strongly to extremely unstable air mass and moderately sheared environment is present in the forecast MDT/ENH risk areas, especially over northern Italy and north Adriatic region into western Slovenia and northwest Croatia. 2500-3000 J/kg of CAPE is locally likely to build up, overlapped with 40-50 knots of deep-layer shear.

Conditions will be conducive for severe rotating storms to develop. A few intense supercells with large hail and severe winds are expected. Moderately strong southeasterly low-level flow should bring high moisture from the warm Adriatic into the north Italy plains.

Locally strongly enhanced helicity could support tornado threat. Especially across the eastern Po valley and Veneto region. This area is being monitored for a possible upgrade into higher categorical risk if conditions become more clear and robust in the late morning observations.

Another concern is the flooding threat, as very high dewpoints are present across northern Italy. Flash floods are locally quite likely given a huge amount of rainfall forecast. Also, for this reason, categorical risks have been extended into the Alps where high rainfall sums are expected.

Storms could merge into a large MCS into the Alps and north Adriatic region, racing towards the northern Balkans. This will support severe winds and excessive rainfall overnight to Tuesday. 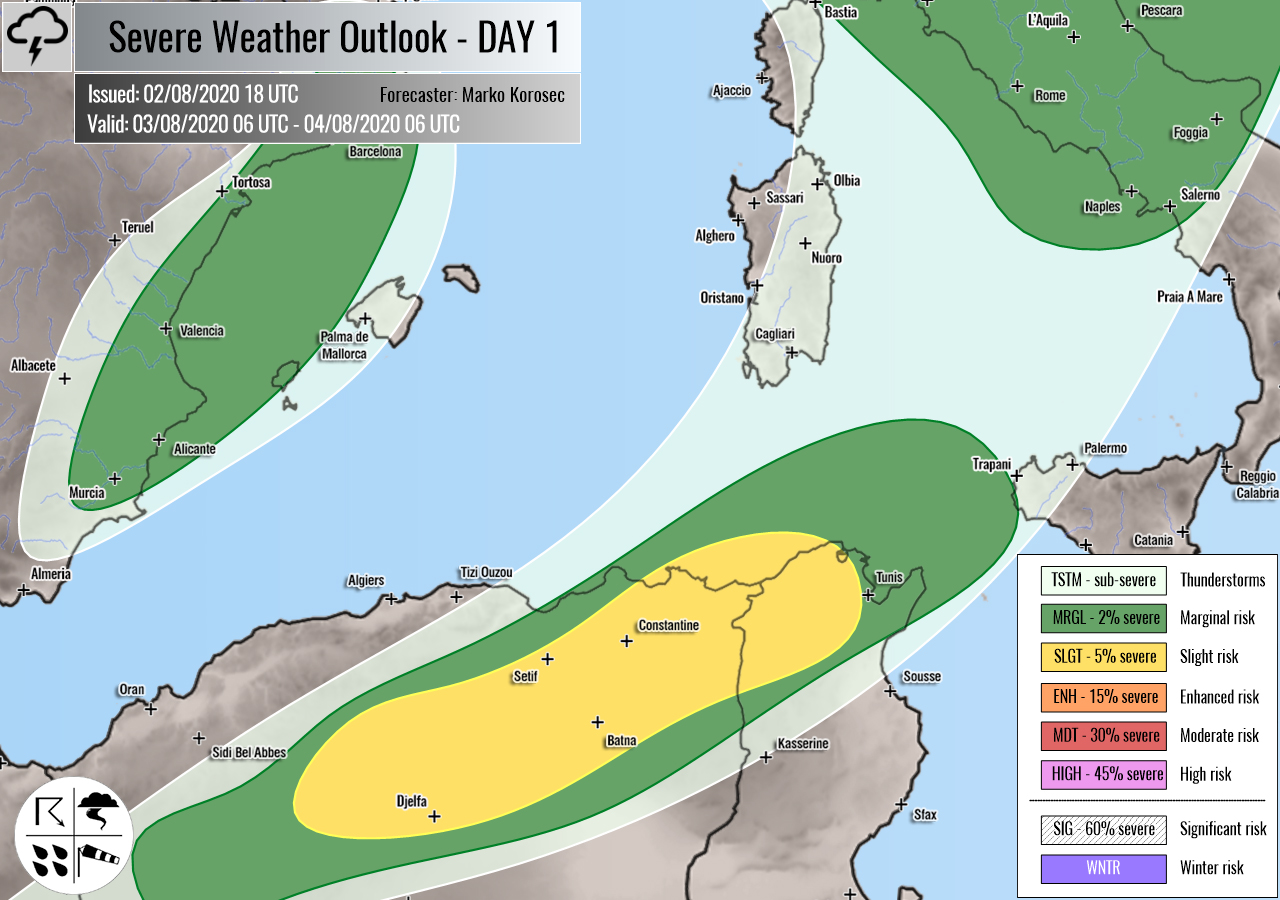 SLGT risk has been issued for northern Algeria and northern Tunisia with a threat for a few isolated severe storms, capable of producing severe winds and large hail.

A moderate deep-layer shear and instability should support organized storms. Supercells will be possible.

MRGL risk has been issued around the SLGT risk area, with a marginal threat for severe storms. The coverage of storms is strongly limited.

MGRL risk has been issued for eastern Spain with a threat for some isolated storms. Moderate shear and weak instability could result in marginal hail and severe winds.

TSTM risk areas have been placed across Benelux, parts of Scandinavia and western Russia, extreme southern Balkan, and southwestern Turkey. Convective storms are likely to occur but should remain sub-severe.