Robust severe storms with a threat for large to very large hail, severe damaging winds, and torrential rainfall with flash floods are expected across Spain, France, and the UK on Tuesday. Lots of storms also across central Europe. 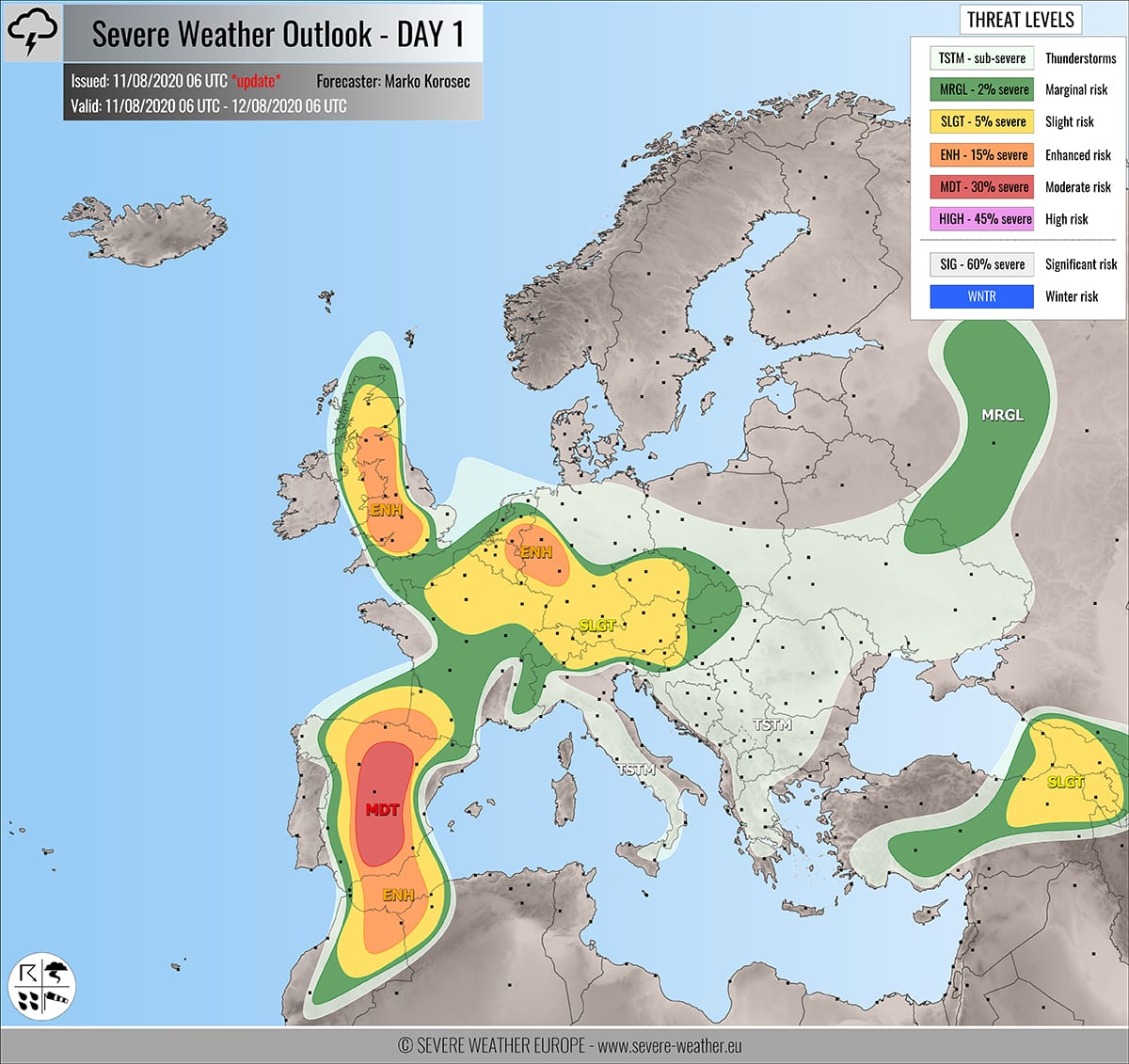 Part of Benelux and western Germany has been upgraded into ENH risk based on the recent model guidance improvement regarding the intensity and coverage of storms this afternoon. Rather widespread activity is expected. 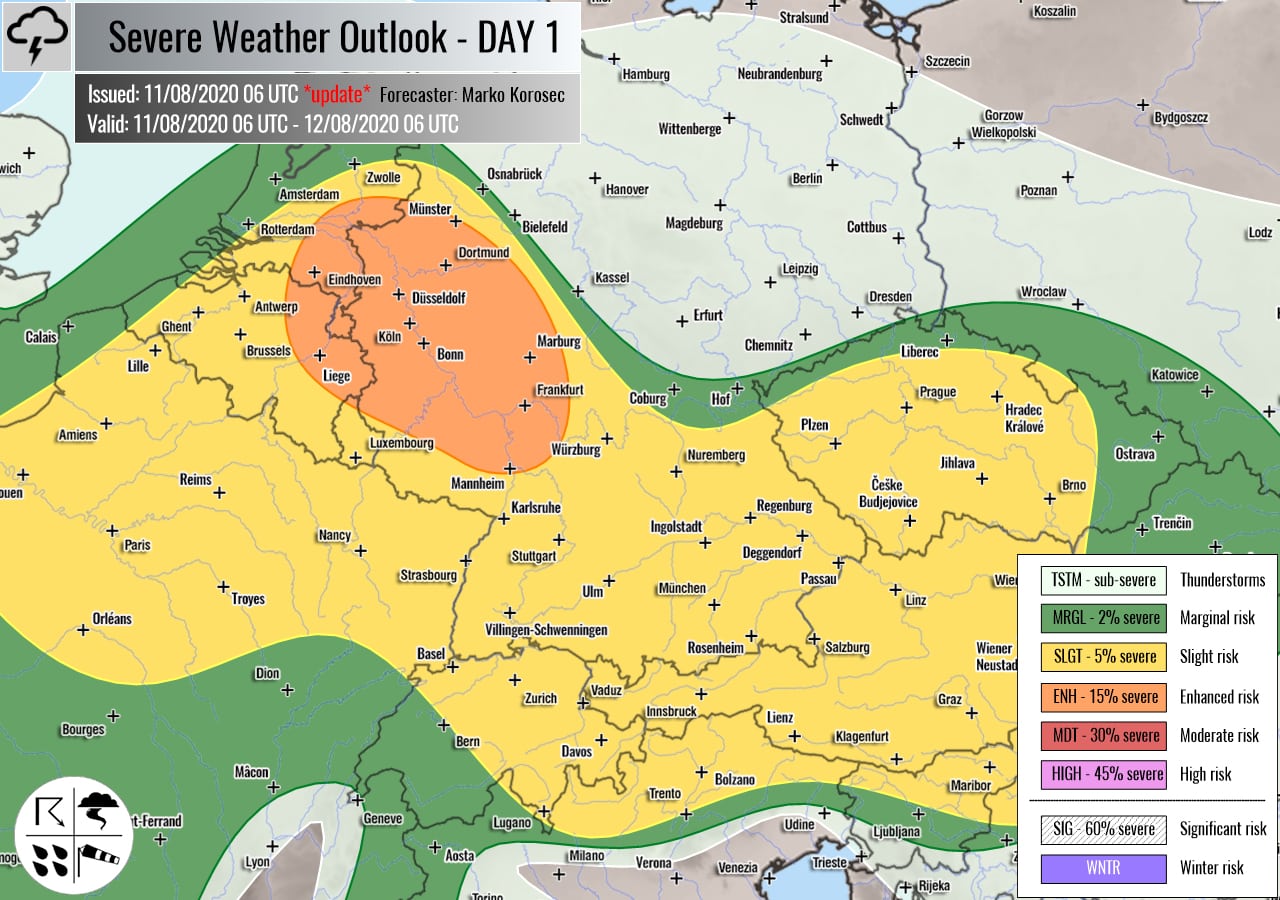 ENH risk has been issued for eastern Netherlands, eastern Belgium, northern Luxemburg and western Germany with a threat for excessive rainfall with flash floods and a lesser extent for severe winds and large hail.

Slow-moving storms are expected to deliver a lot of rain locally, which should significantly enhance flooding threat. High-resolution models are hinting 60-100 mm of rain is possible in western Germany. The most robust storm cores could result in some large hail as well. 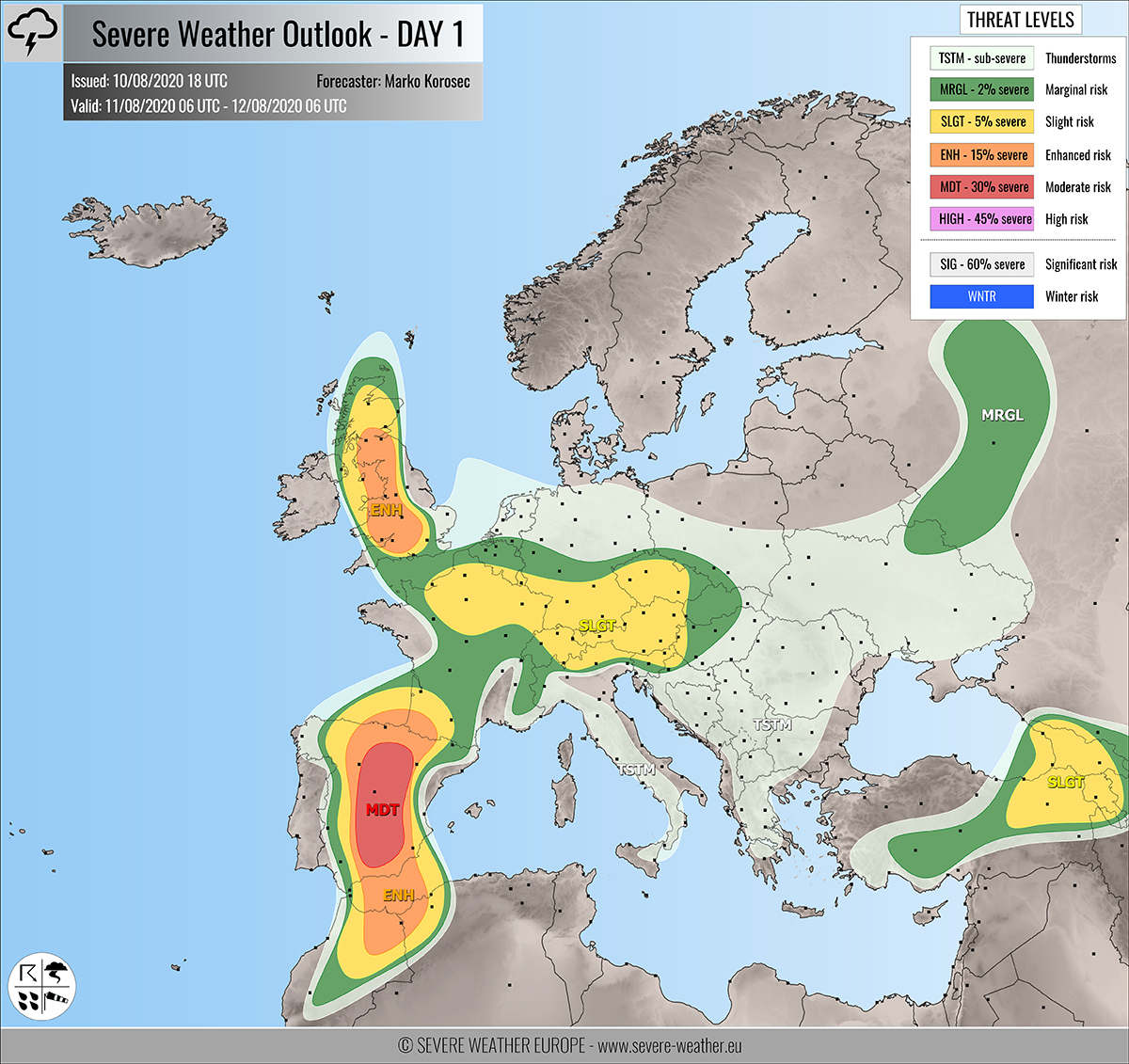 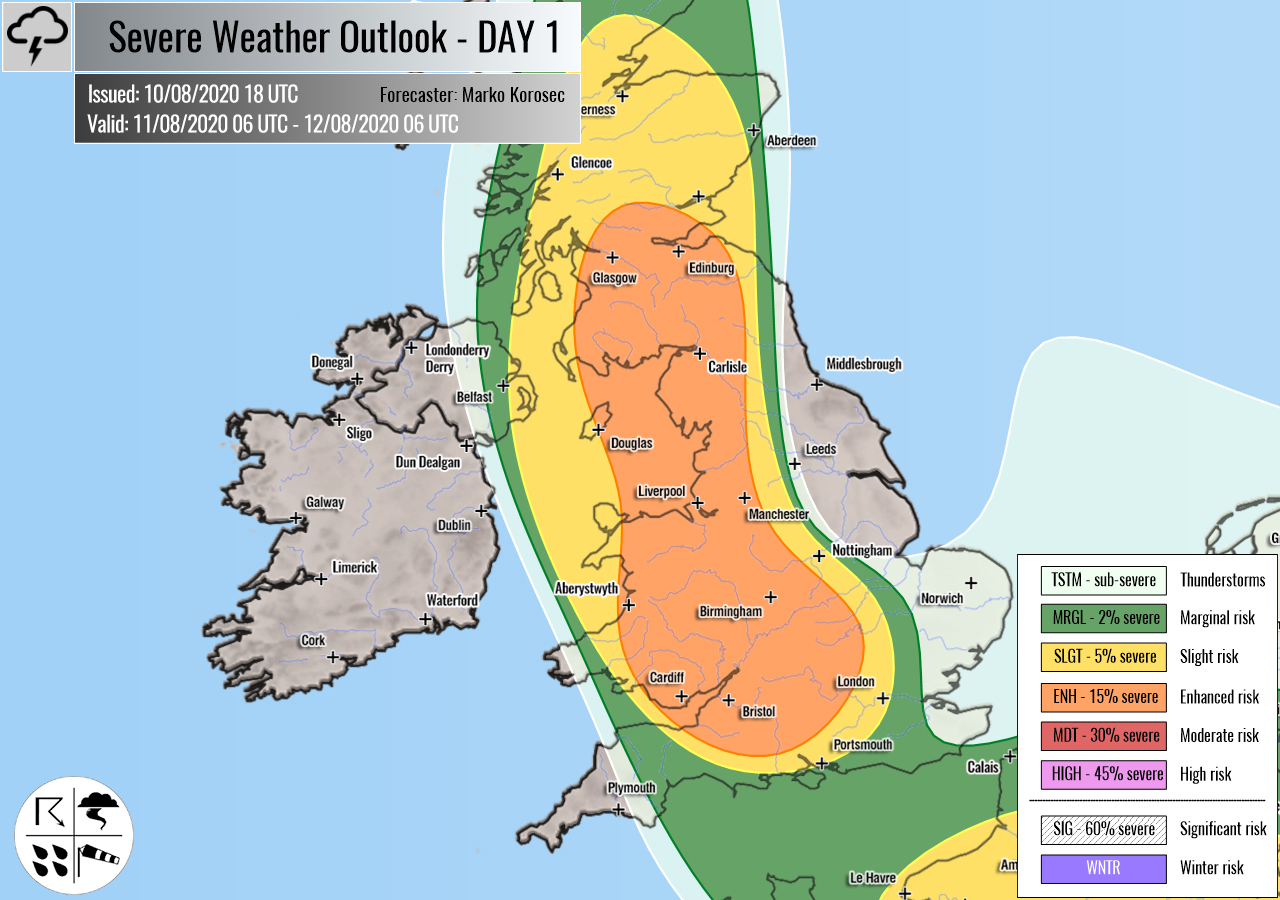 ENH risk has been issued for parts of England, Wales into southern Scotland with a threat for severe storms, capable of producing severe winds and large hail. Supercell storms are likely to form as well.

SLGT risk has been issued for areas surrounding the ENH risk including much of Scotland with a threat for isolated severe storms, capable of producing severe winds and marginally large hail.

Moderate to strong instability builds up during the peak time heating hours and overlaps with increasing deep-layer shear. A few isolated to scattered storms are likely to initiate in the afternoon. Favorable shear should allow storms to become organized while tracking north-northeast into the evening hours. A few large hail and severe wind events will be possible. 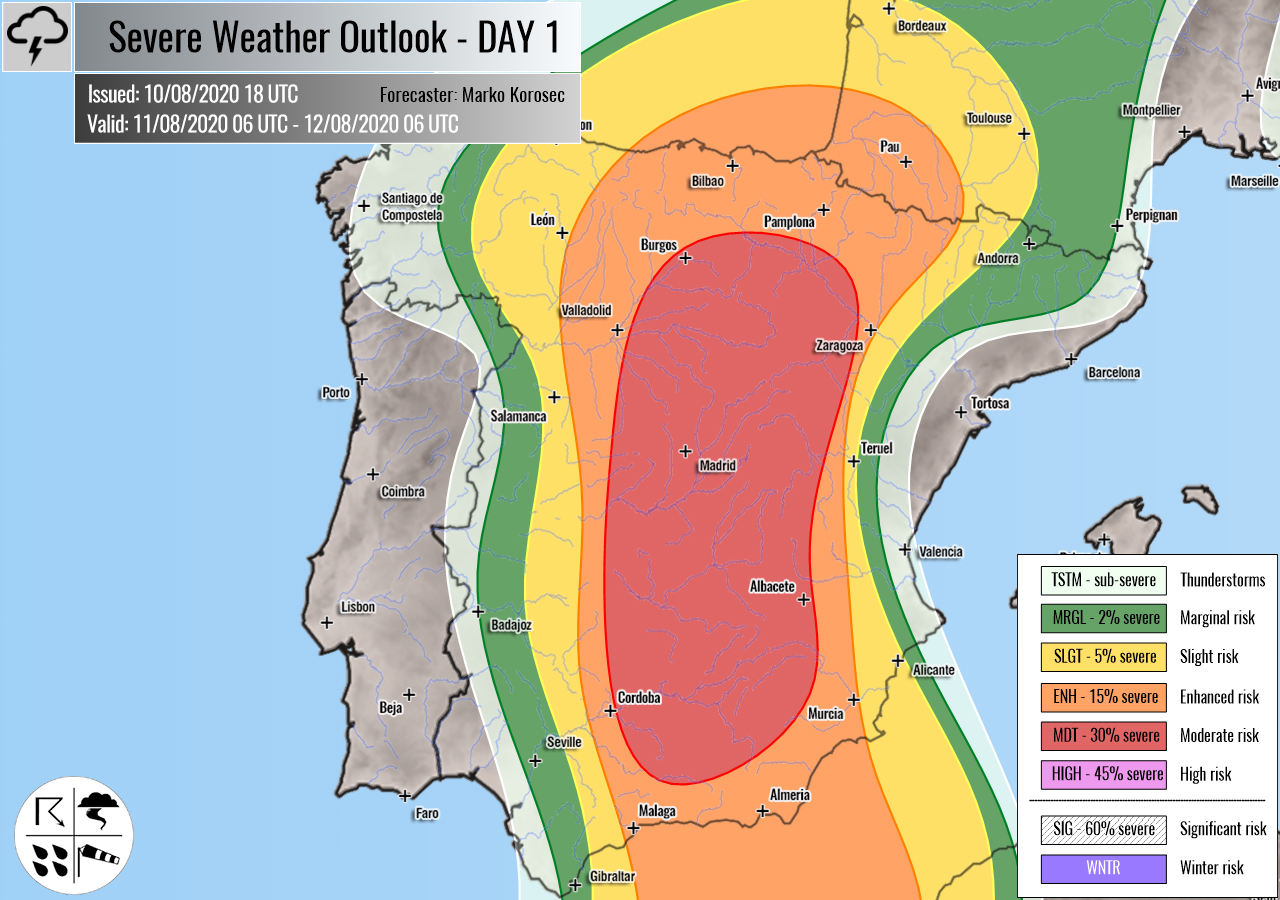 MDT risk has been issued for central Spain with a threat for scattered to widespread severe storms, capable of producing severe winds, large to very large hail, and torrential rainfall with flash floods. Supercell storms are expected.

ENH/SLGT risks have been issued for areas surrounding the MDT risk area, including much of Spain into southwestern France, northern Morocco, and extreme southwest Mediterranean. Organized severe storms, capable of producing severe winds, large hail, and torrential rainfall are likely.

A deep upper-level low will be moving across the Iberian peninsula on Tuesday. Cool air aloft with strong surface heating should result in strong instability, potentially extreme along southeast Spain. Rapid destabilization is expected through the early/mid-afternoon hours. With moderate to strong shear (around 50 knots), robust storms are likely. Supercell storms could bring very large hail and severe damaging winds.

Some tornado potential is also possible along the southeast Spain (Andalusia, Murcia, and Valencia) where extremely unstable air mass couples with enhanced low-level shear and helicity. 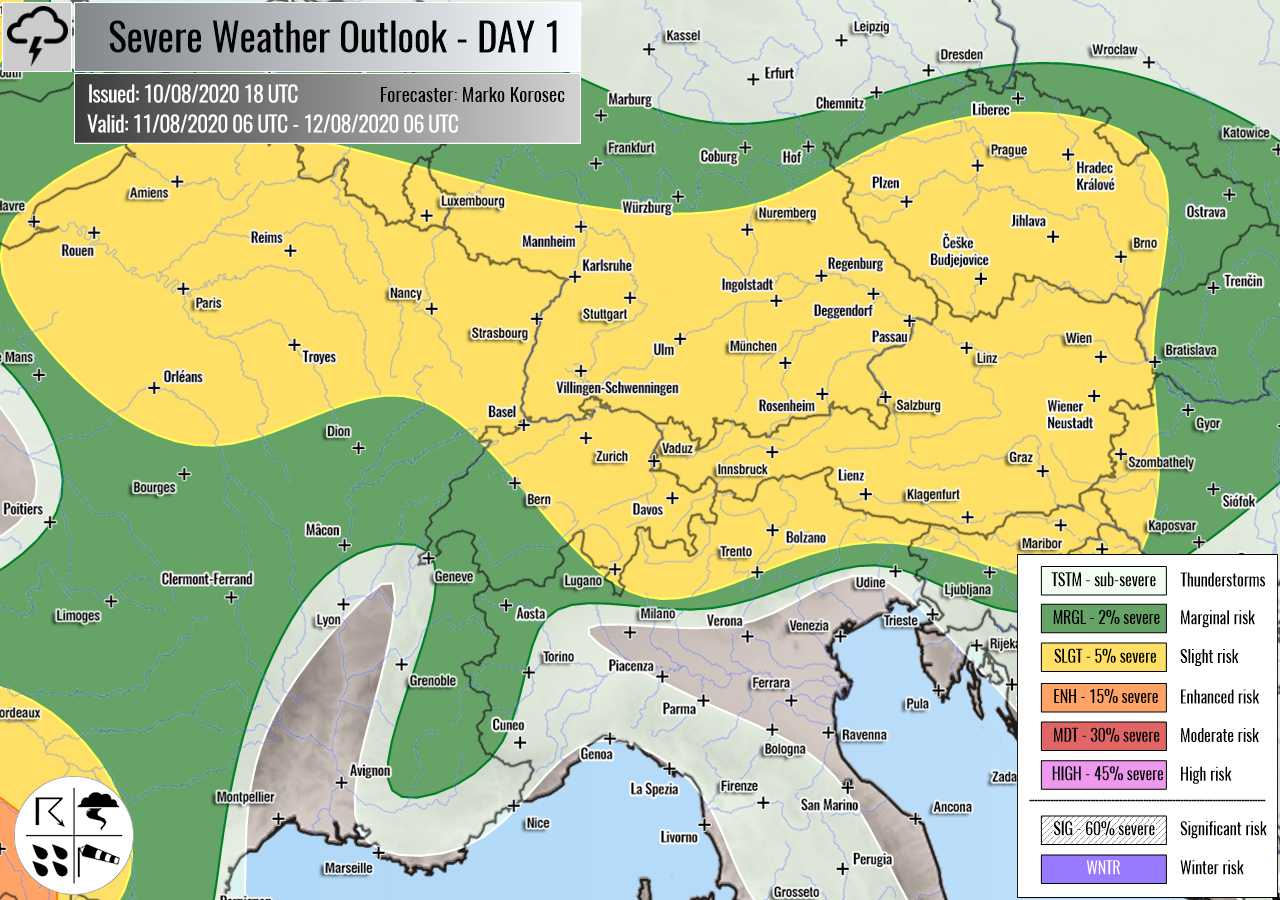 A moderately strong instability under weak shear should support some organized slow-moving multicell storms with high rainfall sums. those could result in flash floods threat and some larger hail events. 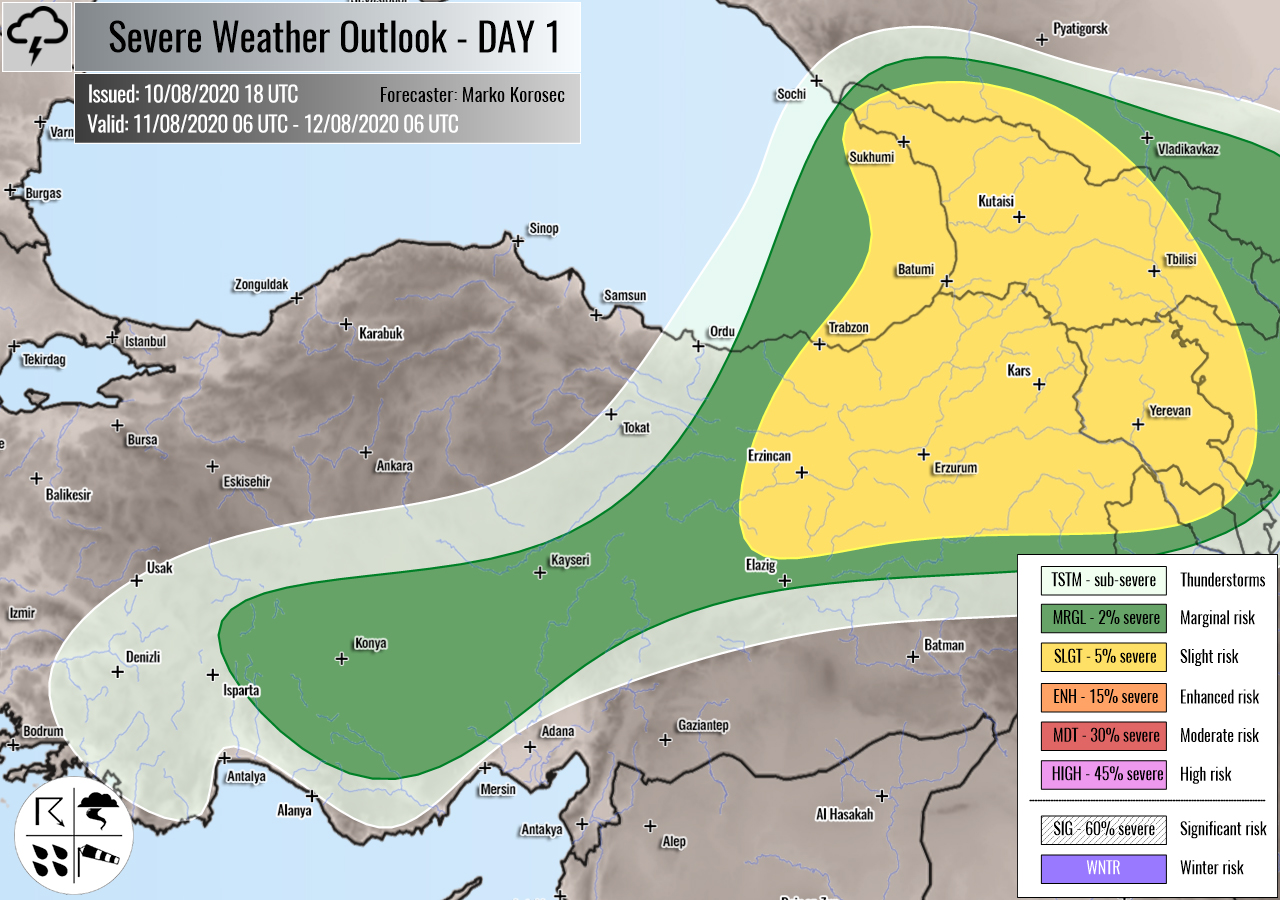 SLGT risk has been issued for eastern Turkey into Georgia and Armenia with a threat for a few isolated severe storms, capable of producing severe winds, large hail, and excessive rainfall.

TSTM risk areas have been placed across the Balkans and Eastern Europe with a threat for daytime driven storms. Storms should remain sub-severe.

Share on TwitterShare on RedditShare on FacebookShare on PinterestShare on WhatsApp
Hurricane Elida is grazing across the Eastern Pacific - should stay away from any land areas
← Previous
Severe Weather Outlook - Aug 12th, 2020
Next →
Comments are closed.