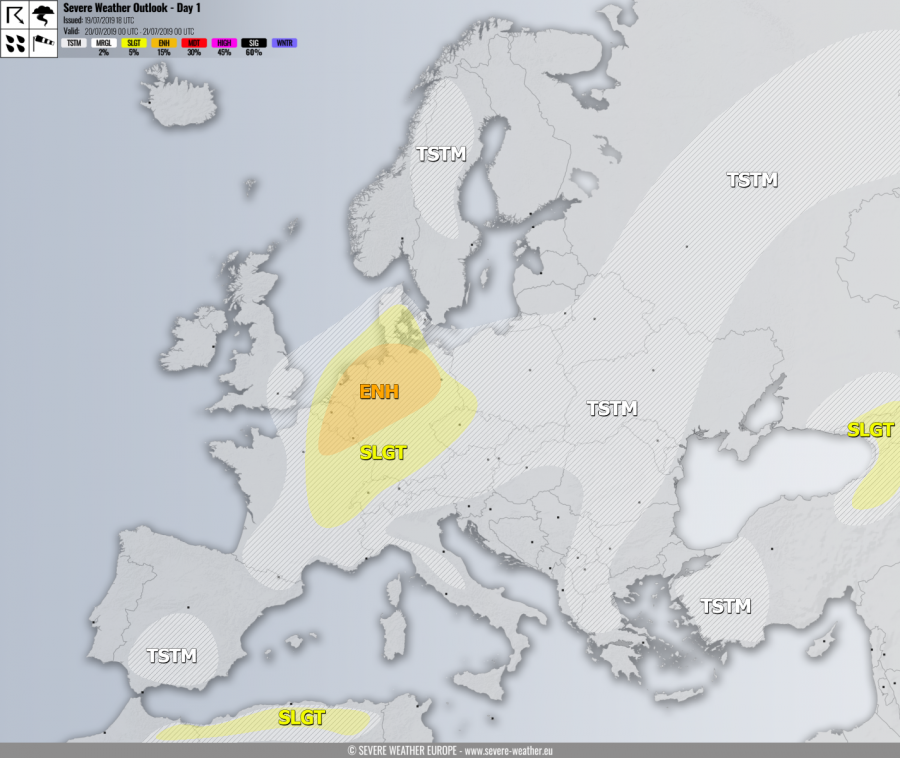 A large trough is located over the N Atlantic and W Europe with a sharp short-wave crossing Benelux and NW Germany during the afternoon and evening hours. To the east of the trough, strengthening ridge is ongoing elsewhere except S Mediterranean and Balkan where remnants of an old upper low remain. Large low continues weakening over W Russia.

ENH risk has been issued for NE France across Benelux into WNW and N Germany with threat for severe storms, capable of producing severe winds, torrential rainfall and large to very large hail. In the early morning, a cluster of storms will enter from the UK and English channel towards NW Germany and Denmark with mainly severe wind threat. During the afternoon hours, additional storm initiation is expected along the frontal boundary moving from W to E across Benelux into Germany. Within unstable (near 1500 J/kg MLCAPE) and sheared environment (40-50 knots bulk shear), organized storms including discrete supercells are likely. Large to very large hail will be the primary threat. However, storms will gradually cluster into a larger system or two towards the evening hours while moving across northern Germany with severe damaging winds and large hail as primary threats.

SLGT risk has been issued for areas surrounding the ENH risk including ENE France, Germany and Denmark with threat for more isolated storms, capable of producing severe winds, large hail and torrential rainfall. SLGT risk is extended towards Denmark with the reason of possible morning severe threat while SLGT over E France / S-CNTRL Germany is placed where some isolated storms are possible ahead of the front, triggered by local topography and convergence zones.

SLGT risk has been issued for NE Turkey and Georgia with threat for isolated severe storms, capable of producing severe winds, large to very large hail and torrential rainfall.

SLGT risk has been issued for NE Morrocco and N Algeria with threat for isolated severe storms, capable of producing severe winds, large to very large hail and torrential rainfall.